With my camera bag loaded with several boxes of 120 film and a brick of Ilford HP5, I pulled out of the driveway bound for Hartford, CT; I paused, wondering how I arrived at this moment. All of the little moves and influences resulted in me lugging two cameras with a combined age of some 75 years to shoot the season’s most crucial cyclocross race. There is a “Butterfly Effect” moment in our lives that leads us to our current state, and somewhere amongst the mud, dust, and thousands of shutter actuation is mine. 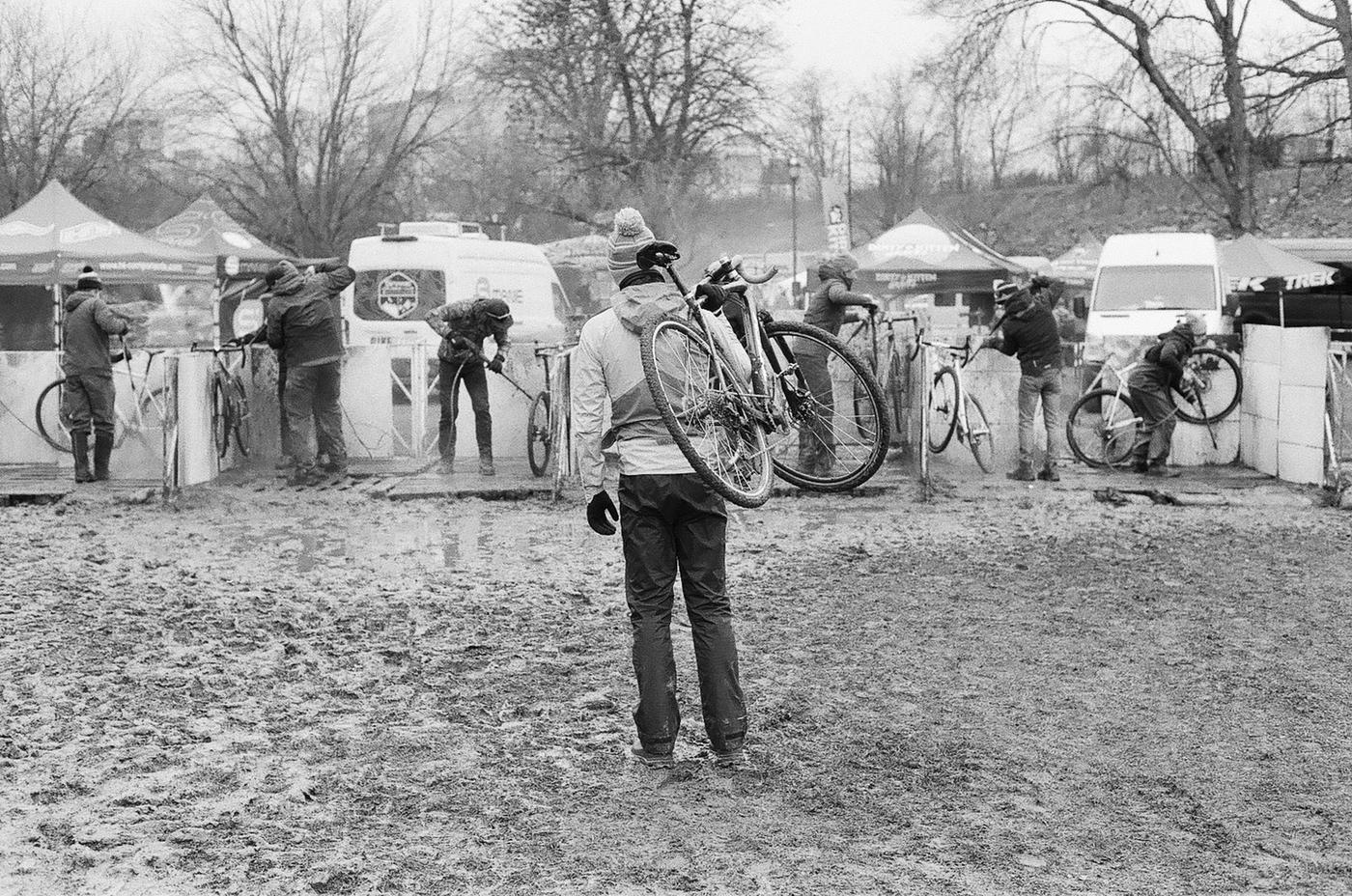 It was March of 2006; I was riding my David Grey Surly Steamroller back to a dilapidated house acting as an office in Pittsburgh’s Uptown neighborhood. It was my last day of two years and some change of working as a bicycle courier. The day is still vivid in my memory; the sun was shining as it so rarely does in early spring. I handed over my two-way radio and final manifest and rode the few miles home to spend the next four months with our newly born son. By March, my wife had exhausted her maternity leave time and had to return to work. We weren’t quite ready to send him to daycare, and as a new father with a moderately hazardous occupation, it was the perfect reason to walk away while I still could. In the coming weeks, we would spend our days walking to the coffee shop, watching the final rounds of the Champions League, and feeding a fearless squirrel through the mail slot of our front door. During our morning walks, I started carrying my Pentax K1000, capturing little moments together that began to reignite my interest in photography. Digital cameras were still relatively new, and film, good film, was still readily available at the drugstore. A few years prior, I had stopped attending a local art school where I was studying photography due to the cost of supplies. In hindsight, I daydream about film prices from 2001. As my son grew, so did my interest in getting back to bike racing, and I began to venture again to ‘cross races up and down the east coast. From Baltimore to Gloucester, MA, I was hooked. I would toss my Pentax into my race bag to capture the weekend, but often, between racing and working the pit for friends and teammates, the lens cap rarely came off. It wasn’t until a few years later that I made a concerted effort to shoot some photos during race weekends. In the parking lot of the race in Gloucester, MA, I saw someone with a white backdrop set up to shoot a rider’s portrait with a Hasselblad. By now, I was carrying a digital camera to races that I had bought secondhand, but I was taken by what I had seen. I found out later that the photographer’s name was Keith Snyder, a ‘cross racer and photographer from New York with particular feelings about digital photography. 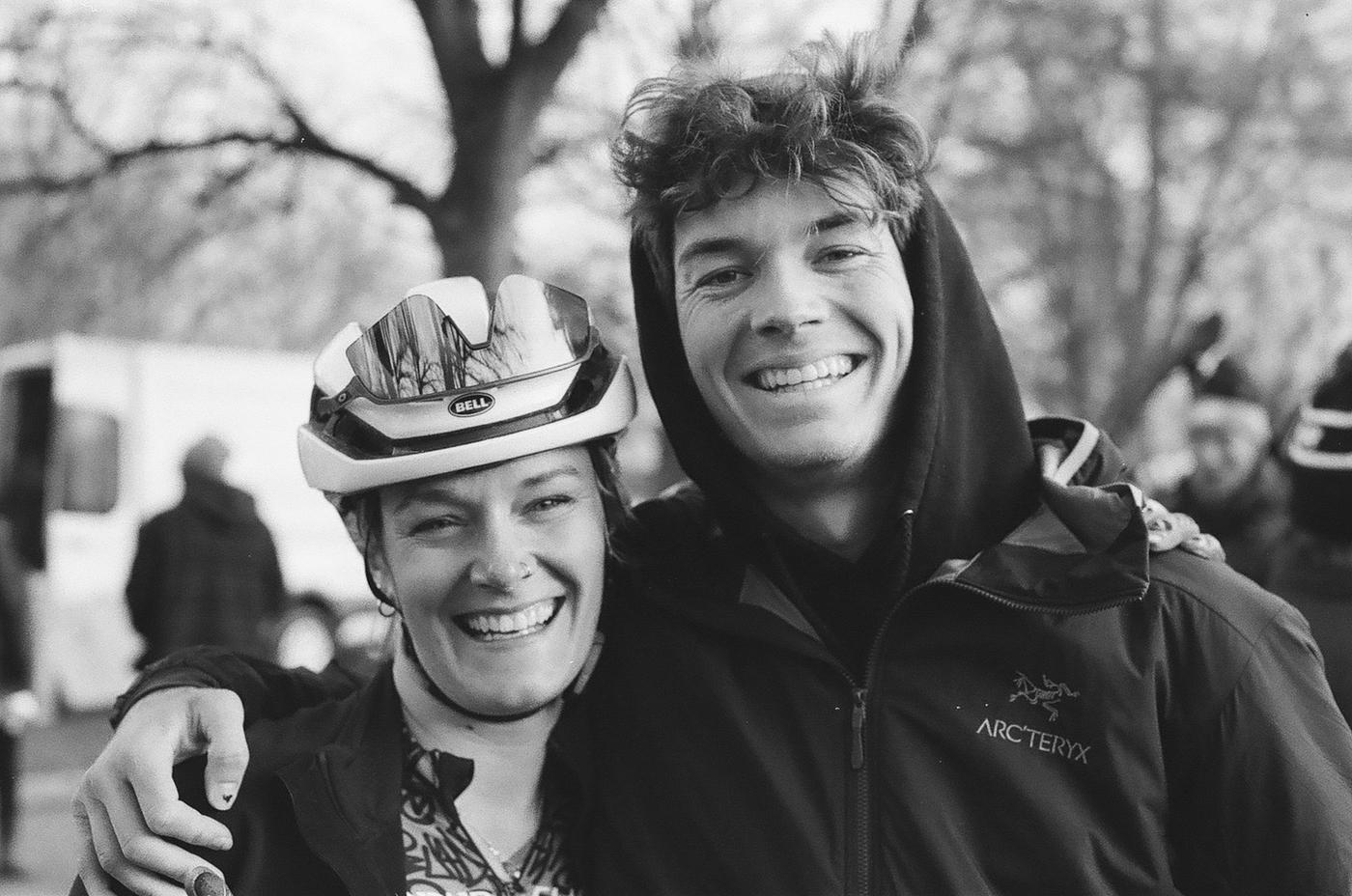 Within a year of seeing Keith Snyder shooting portraits in the parking lot, I picked up a few issues of Rouleur Magazine. Inside the pages was a story shot by Daniel Sharp during the Cyclocross Masters World Championship in Louisville, KY. The photos were different, not typical race photos, but these little vignettes shot on a Hasselblad again. Later I would see cycling work by Brian Vernor and Emily Maye shot on film, and each time it stuck with me. I thought, “I want to shoot cycling on film if I ever get good enough or have the confidence.” Camera technology has come a long way since the early 2000s. Insane frame rates and autofocus capabilities coupled with AI technology make my old Pentax the equivalent of chiseling figures into stone in comparison. While I use and enjoy modern cameras, there is a certain point during the process that you feel removed. The camera feels as if it is doing the heavy lifting these days and begs the question, is it photography or something else? The experience of modern digital cameras often has me reaching for my film cameras when I’m shooting for myself. Over the summer, a friend was selling his Hasselblad, and I couldn’t resist. It was a camera that I had thought about often, probably too often to be considered healthy. The price was right; I was loading film backs before I knew it. I started digging through all the photographers I knew who shot with the Hasselblad, Richard Avedon, Mick Rock, skateboard photographer Mike Blabac, and Platon, to name a few. The more I shoot with the camera, the more I love it, and the more I appreciate the incredible work of real masters. It is far from intuitive and requires real patience to get the shot. So what better environment than the chaos of Cyclocross Nationals to see how far my photography journey has progressed? This season there has been a noticeable uptick in the number of film cameras clicking and clacking around the course. The Nice Bikes entourage alone appears to have a collection that could rival the KEH warehouse. It’s refreshing and exciting at the same time to see people taking a slower and more systematic approach to photography. Perhaps it is a resurging trend that will soon perish as Kodak continues raising film prices. More so, I believe there is real enjoyment in the slower process, especially in a world where everything is instantaneous. Does this mean we will revert to racing on cantilevers and shooting slide film instead of disc brakes and megapixels? One can dream.