Bag don’t always have to be big and Ornot‘s new bags embody the “less is more” approach to bag design. Both the new handlebar bag and saddle bag are designed to be compact and to hold the essentials. Both models are available in Stone Blue, Olive, and Morocco (pictured). Head on over to Ornot to see all the details. 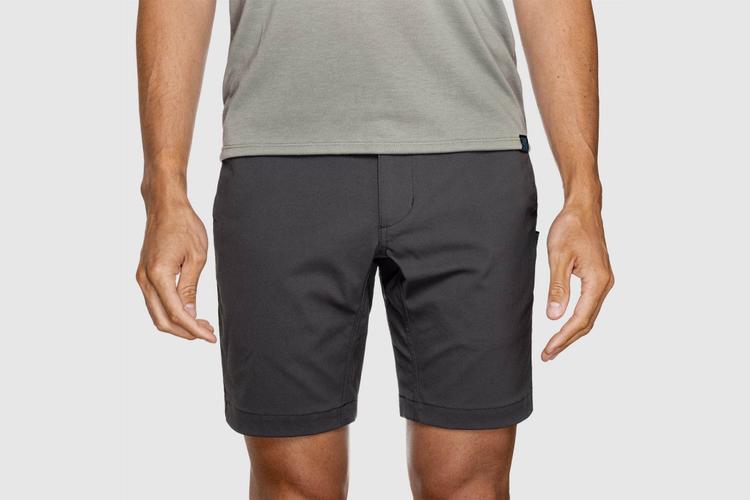 Have you tried looking for shorts recently, only to be bummed that they all look like they came from a surf shop in the 90s. Baggy, long, parachute-looking shorts are a bummer. In my attempt to find a MUSA, quick-drying, durable short I found the Ornot Mission Shorts and they quickly replaced my old go-to shorts. Sure, an 8.5″ inseam might not look like modern MTB apparel but I’d argue that’s a good thing. Shorts are short for a reason. Otherwise, they’d be called “Longs”.

These shorts feel great on a road, gravel, or MTB and even off the bike. They’re made in the Bay Area from 95% recycled nylon, feature four pockets, one of which has a zipper for extra security, and are gusseted to withstand wear and tear from the rigors of cycling…

The Ornot Mission Shorts are back in stock at Ornot with a retail of $108. 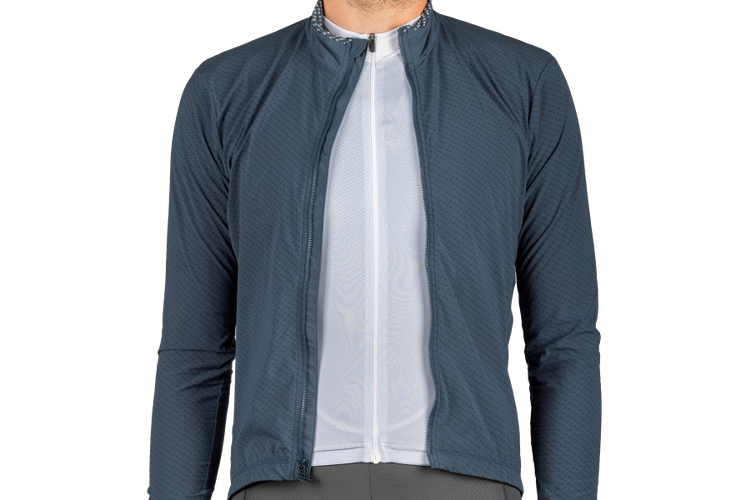 In an effort to make the ultimate packable riding jacket, ORNOT might be onto something. This new Micro Climate Jacket features a strong lightweight fabric custom milled especially for ORNOT. Designed for riding in micro-climates, areas where 20º temperature swings are the norm, this stretchy, water-resistant jacket packs into its rear pocket, weighs only 155grams, and will keep you comfortable in 40-67º degree weather.

Priced at $210 and shipping now from ORNOT. 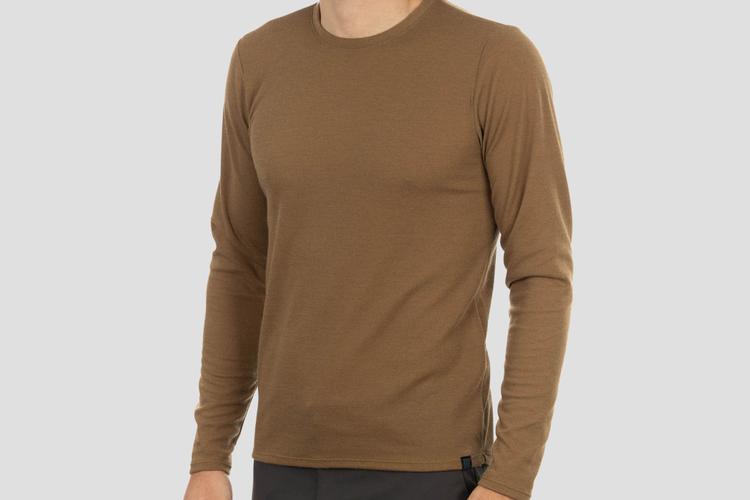 I’ve been wearing the short sleeve version of this shirt for a few weeks now and my only complaint is it wasn’t a long sleeve! I love long sleeve shirts for summer riding since the material wicks sweat and keeps the sun off my arms. Luckily, today ORNOT announced the long sleeve trail shirt, which is made in the USA, made from recycled yarn, is climate neutral, and gives 1% for the planet. These shirts are in stock now for $60. Head to ORNOT to see more. 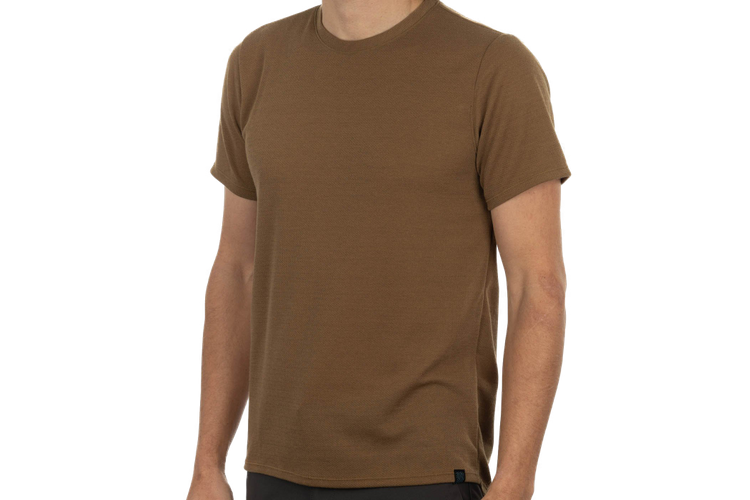 With warmer months on the way, it’ll soon be time to leave the jacket at home and confidently roll out your door with a short sleeve tee shirt on. For those looking for a more casual look on the trail this year, check out ORNOT’s Short Sleeve Trail Shirt, made from Polartec Power Dry Fabric, in this new coyote color. Now, before you huff and puff about a $50 shirt, know that these shirts are made from Polartec’s nicest fabric that features a material called X-static that keeps your clothes smelling fresh even after a few rides. I’ve been riding in it this week and am very impressed. That’s coming from someone who only wears merino wool shirts, year-round. This shirt will be in heavy rotation this year!

This ain’t your normal synthetic fabric that stinks to high heaven after just a short pedal. These shirts are sewn in San Francisco and are in stock now at ORNOT. 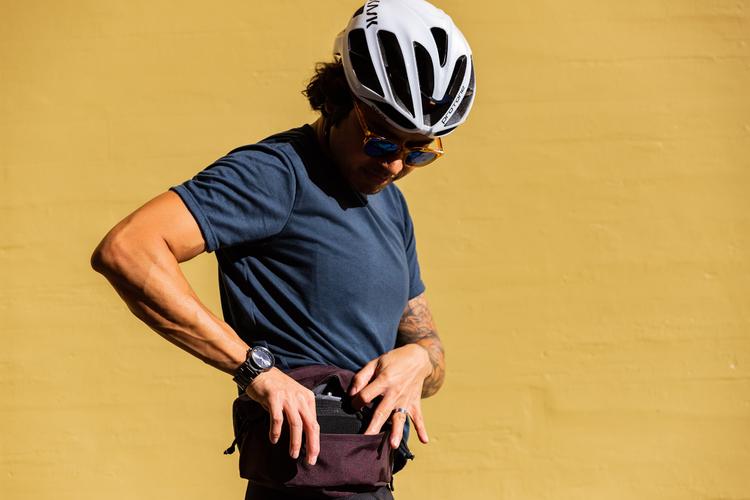 Hip packs are perfect for gravel rides or races and all-day MTB outings to keep your bike light and snappy, free of jingle-jangle. The Axis features include an internal zippered compartment, a key clip, and a rear mini U-lock holder. It also utilizes an ultra-thin laser cut waist belt that ensures the pack is hardly felt while on the move.

Head to Ornot to see more!

ORNOT knows not everyone wants to kit up for every bike ride and their latest launch reflects that with a whole catalog of technical tees, sweatshirts, and shorts. Their Merino Sweatshirt utilizes Polartec Power Wool, their Tech Tees use Drirelease fabrics, which dry four times faster than cotton, and their Mission Shorts are constructed to give you plenty of movement while on and off the bike. See the whole impressive, made in San Francisco lineup at ORNOT. 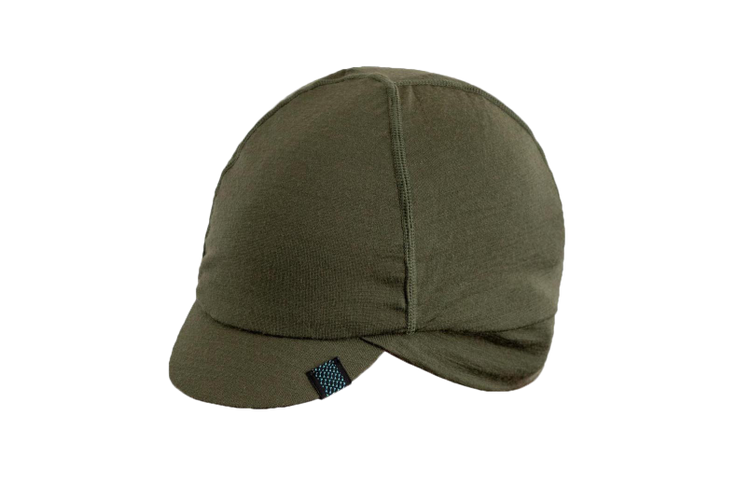 What a winter it’s been! It certainly caught me off guard, scrambling through my apparel drawers looking for ways to keep my extremities warm. One staple in anyone’s winter wardrobe are merino caps like the latest from Ornot. It even comes in OD green… See more at Ornot.

Polartec’s fabrics are amazing. If you own a jacket you too can attest to its durability, breathability, stretchability, and its ability to keep you dry. For these reasons, Ornot looked to Polartec’s newest Neoshell fabric to be used in their new Magic Shell jacket. Head over to Ornot to see more!

There’s something special that happens when an apparal brand’s aesthetic meshes seamlessly with a bicycle manufacturer. Ornot teamed up with Chapter2, a New Zealand-based company to do just that with their limited Mega Matching Capsule, dubbed the Gray Ties. With matching apparel, a specially designed TERE disc road frame open for 2-week pre-order window.

The kit includes a Chapter2 frame, fork, seat post, stem, thru axle, headset, with ORNOT jersey, bibs, bottles, socks, bar bag and macgyver. Limited to 100 frames worldwide. All bikes in this photo shoot were built around 30mm tires and have been endlessly praised for compliance, handling, and overall good looks.

Check out more at ORNOT. 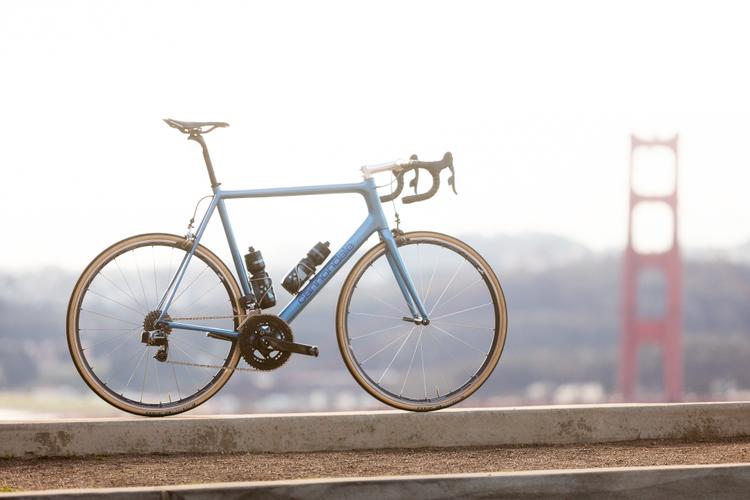 After breaking my fork, putting some deep scratches into the head tube paint, and getting a replacement fork from Cannondale that wasn’t going to match, I decided to get my Evo repainted. Choosing color is an agonizing process, but this idea fell into place really easily: early 90’s Cannondale Track’s are on of my all-time favorite bikes, Cannondale Track bike vinyl decals can be sourced from Britain, and the simple lines of the frame would really lend itself to this idea. Besides, ‘classics are classics for a reason.’

The painter, Eric of Burnt Bicycles, is a super rad dude who does work fairly close-by. I'd sent him a couple other frames for carbon repair+repaint and knew he'd kill this. Sure enough, had this frame and a paint matched stem back to me within 2 weeks, recreating the color from scratch.

Polished silver quill stems really go hand-in-hand with the Cannondale track bikes and knowing that Ritchey makes a sick polished cockpit with their Classic series, I couldn't not try it out. It looks so good, simple, and clean up front that I refuse to clutter up the front end with a mount and computer. Carbon seat post because ain't nobody got time for beat-up-booties. 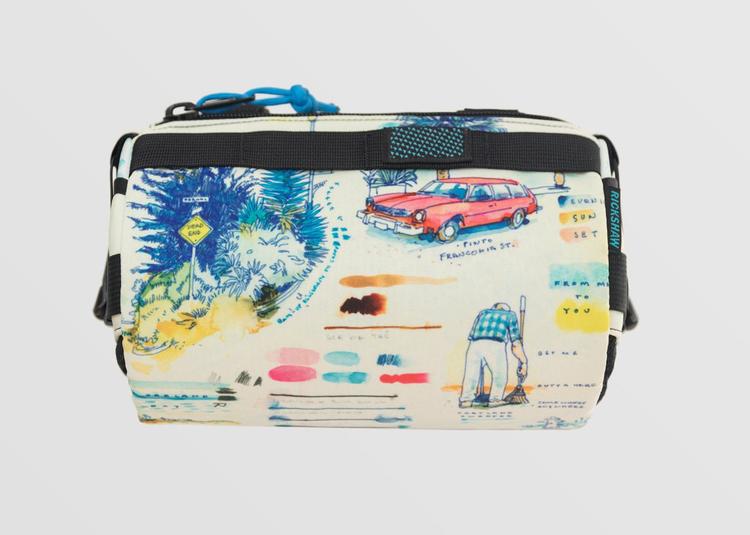 San Francisco-based ORNOT teamed up with local artist and all around rad dude Chris McNally on a bag collection, made by Rickshaw bags in the Bay Area. The two bags, a Macgyver tool bag and a Bar Bag feature artwork by McNally inspired by California. Both are in stock now at ORNOT. 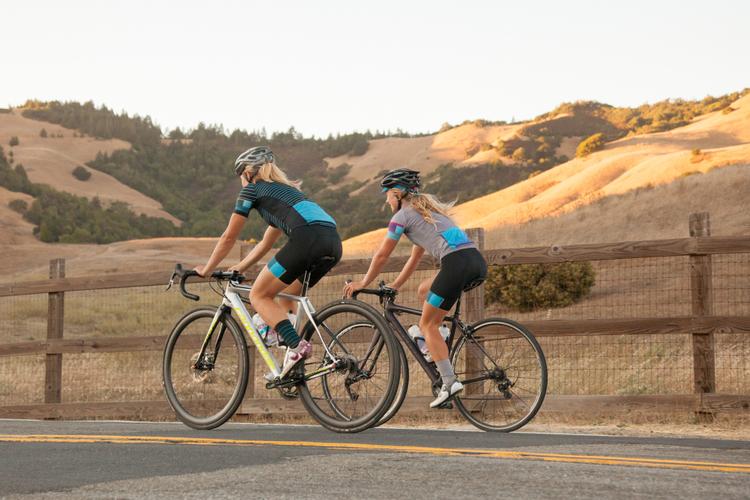 Cycling apparel company ORNOT completely redesigned their House Jerseys and have just received stock of their women’s version. These ultralight jerseys provide a new, refined fit, are made in California and are in stock now at ORNOT. 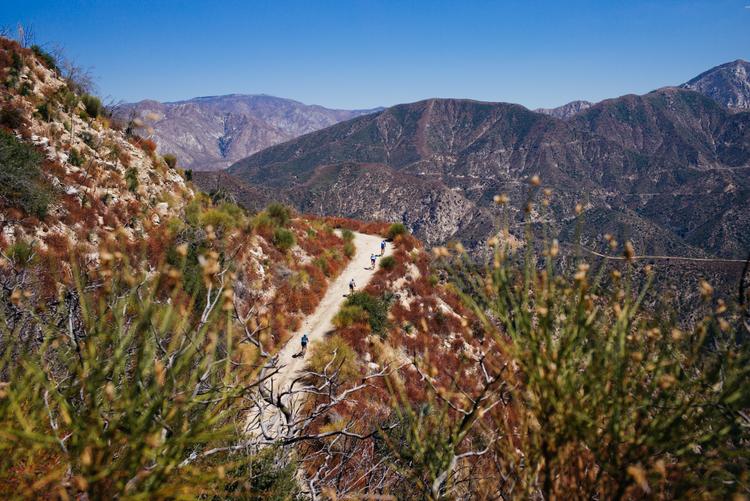 There doesn’t have to be a fire to have our mountains scorched all summer here in Los Angeles. “June Gloom” didn’t come this year, not in June, nor in July and come August, the overbearing warmth cast from afar by our sun has certainly required our vegetation to abstain from hydrating.

It is however the desert. We’re just lucky enough to have the ocean to cool everything down each night. Yet, the lush green mountain tops we had all winter have certainly changed their hue. Yellow flowers made way to yellow plants and those intense purples and greens we had shifted to red, leaving our tracks and trails lined with red, yellow and green. Now if you look out across the landscape, it looks like everything has been anodized Rasta like some MTB skewers from the 90’s. 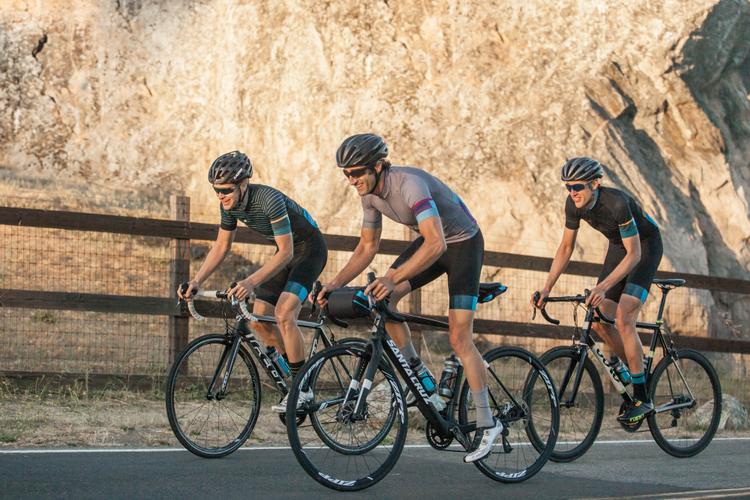 A labor of love, the House jerseys from Ornot are by no means club fit and not really race fit either. They’re redesigned to fit just right, with a slimmer, articulated cut, including a shortened center front. Even the zipper has been redesigned to be lightweight, allowing the jersey to lay as flat as possible. Available in three designs and in stock now at Ornot. 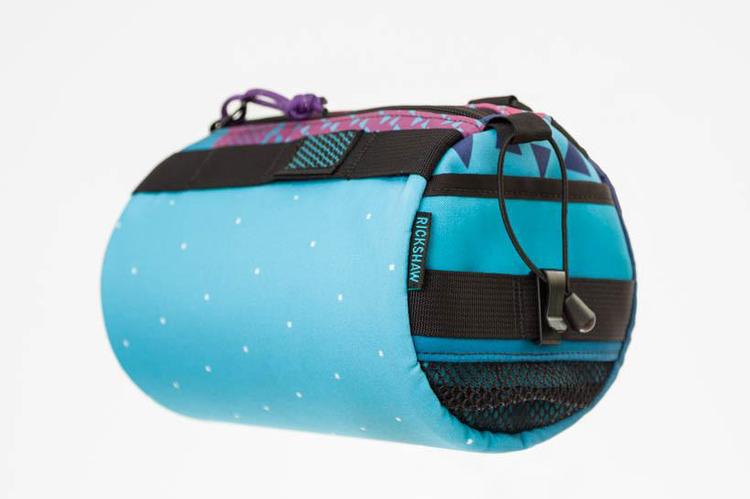 Handlebar bags are the best. I use one to carry my camera, or tools, a jacket or even a corndog. Think of them as a reserve tank for those long rides where your jersey pockets are already stuffed and you would rather not wear a backpack. ORNOT clearly feels the same way about bar bags, which is why they teamed up with Rickshaw to make their own. Head over to ORNOT for all the details! 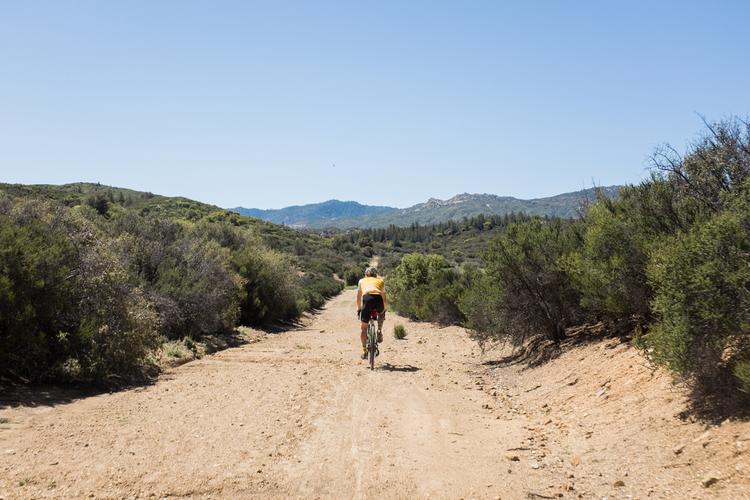 Sea Otter is great. There’s lots of new bike stuff, racing, camping, beer, and friends, but we had a hankering to get out on some dirt roads after hanging out with Ritchey on Friday. We had heard of an abandoned dirt road down in Los Padres National Forest and we felt this was the perfect opportunity to check it out (and maybe test out a few new products). Indians Road can be accessed by Arroyo Seco Campground and leads south into the wilderness. Our plan was to camp near the trail, ride it in the morning, and then get back to Sea Otter in the afternoon.

We spent the evening in the woods and woke up to birds chirping and warm morning light kissing nearby hilltops. Try waking up like that at Laguna Seca campground… After a bit of camp coffee and ride preparation, we were on our bikes and headed up the hill.
The pavement ended first, and then our ride, temporarily.

Matt managed to slash a nice hole in his brand new tires’ sidewall 10 minutes into the ride. We booted with a greenback, threw a tube inside, and were on our way. Enter ‘day long anxiety about being stuck in the middle of nowhere with a blown out tire’. We knew we were on borrowed time with a boot, but we weren’t about to give up so soon.

Indians Road is a pretty special place. The road was shut down in ’94 after winter storms caused two landslides along the road, and it remained closed due to pricey and non-ecological repair estimates. The military finalized the closure after 9/11 when the stated the road, which is right next to Fort Hunter-Liggett, would ‘require an increased law enforcement and USFS patrol’. The double track road is now overgrown and full of fallen rocks and sand. There is some dodging of said rocks, and of course a climb over the landslide, but it is certainly rideable on skinny(ish) tires. All together, it is an extremely enjoyable ride very similar to what you might find in Marin, but with a more Southern Californian look.

While you’re only 20 miles from Arroyo Seco campground, the remoteness of the ride and the great expanses you see along the way make it feel like you’re really “out there”. Be sure to pick an instagramable lunch stop…don’t worry, there are plenty.

Little did we know, Murphy Mack (Super Pro Racing) went and planned a route straight through Indians Road for his Spring Classic this weekend. Their ride starts down south and heads up through this same portion of Indians Road, and then into the valley via Arroyo Seco, and up to Gilroy. Should be an epic day for those who go. We never did make it back to Sea Otter, but it was a fair trade by every measure. After sampling a bit of the Indians Road goodness, it’s safe to say that we’ll be planning another longer trip. Hopefully not in the middle of the summer when this place must get HOT, Ornot.