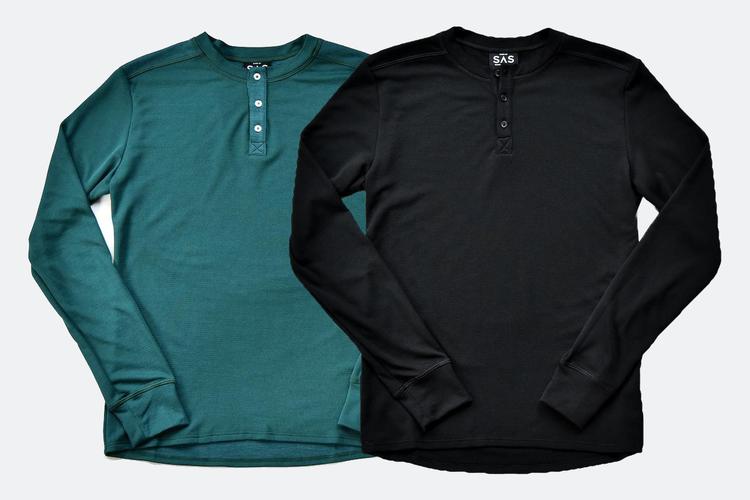 Merino shirts can last for quite some time and with colder weather on the way, make ideal layers for riding due to their thermal properties. Search and State, known for their made in NYC cycling apparel, just released their new Merino Henley shirts. See all the details at Search and State. 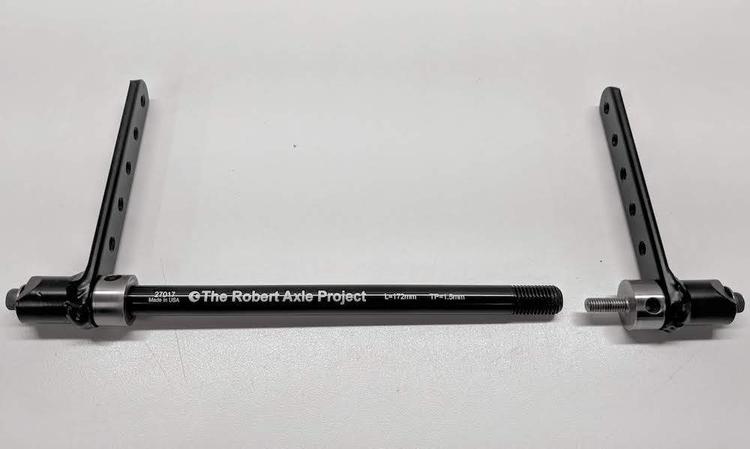 Riding a hardtail on a bicycle tour requires some problem solving, particularly if your bike doesn’t have rack mounts. Like the Specialized thru-axle we posted yesterday, which uses a Syntace thread pitch, the Rober Axle Project’s Cargo thru-axles solve this problem, yet RAP offers various thread pitches and axle widths. They also make various axles for hauling trailers. Head on over to Robert Axle Project to see more! 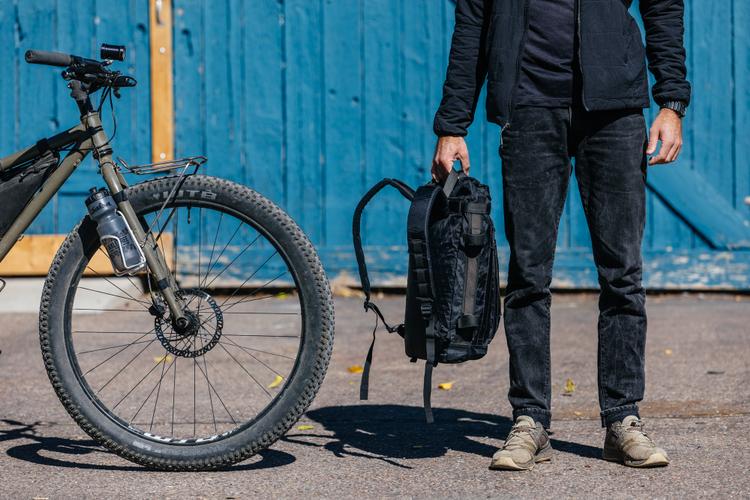 One of the joys this website has brought me over the years is helping out small companies jettison their products into the world. From component manufacturers, apparel brands, frame builders, and yes, bag makers, there’s something special about watching a brand bloom over time and having been a part of that process. Last week, I met this fella named Jeff at Sincere Cycles where he showed me a new prototype bag he’s developing under the moniker Agave Products called the Arroyo Backpack.

Jeff and Agave are based in Austin, Texas, my old stomping grounds, and so this project plucked at my heartstrings a bit. Read on for a more in-depth look at the Arroyo Backpack… 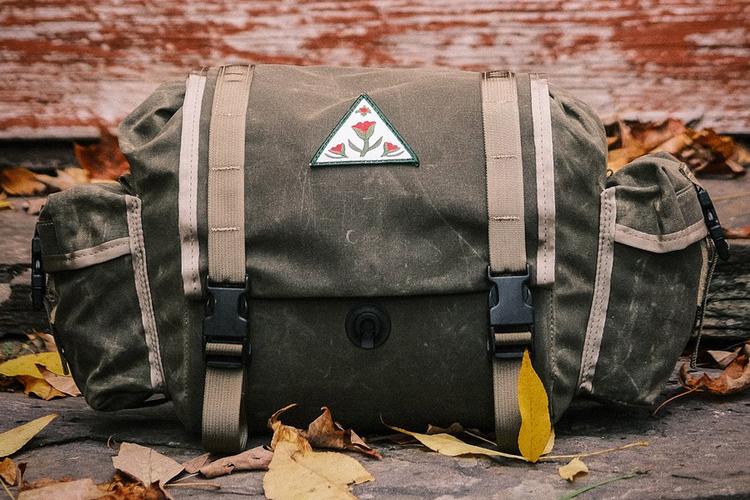 Ron’s Bikes recently moved the production of the popular Fab’s Chest to Connecticut where they are being made from entirely East Coast materials. While the size small (pictured) sold out faster than we could write this post, the size large Fab’s Chest is in stock. Head to Rons Bikes to see these new bags in detail, read more about them, and if you’re looking for a new bag for your touring bike, place an order for the best in the biz at Ron’s Bikes. 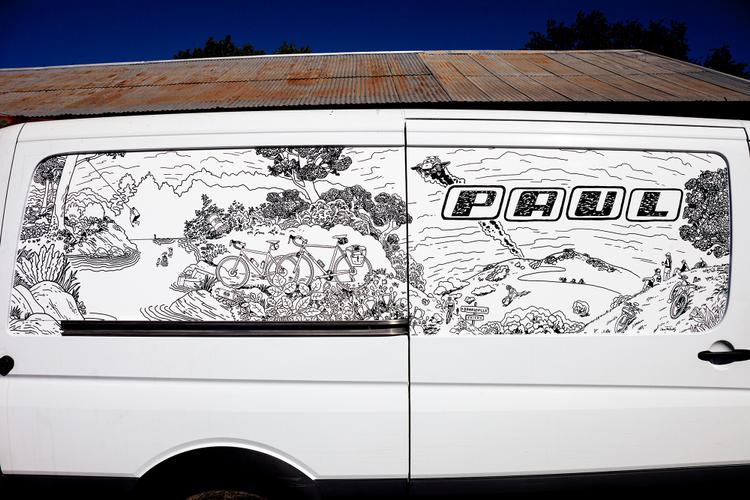 Paul Component Engineering has a lifelong legacy of making parts you can rely on, for just about any bike. This legacy is only possible due to the fact that the team at Paul live, eat, dream, drink, sleep, and travel for all things bike! Part of their tradeshow and bike race fleet is this Sprinter van, which recently got a facelift thanks to Chris McNally. Let’s take a look at this van’s new vinyl wrap in detail below. 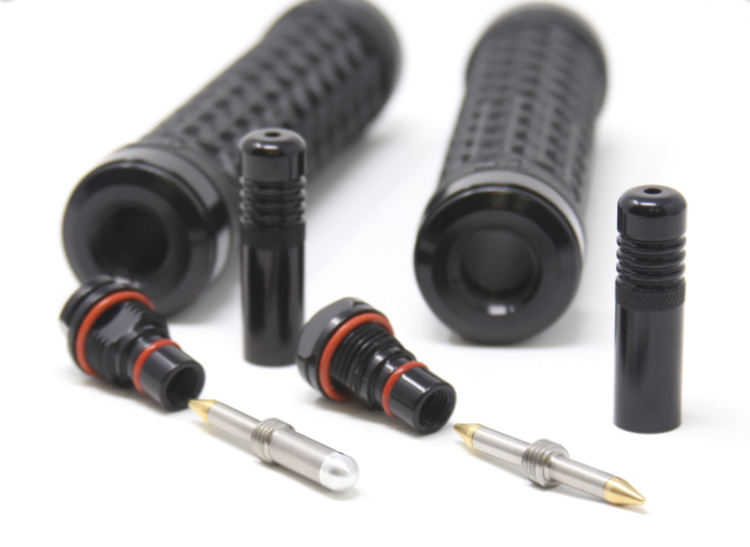 You’ll see lots of companies try to make tubeless tire repair kits but unfortunately, nothing comes close to the technology that Dynaplug invented. Their newest product, the Covert, is something people have asked for and is the people’s tire plugger! That’s right, customers asked for it and here it is. Each handlebar plug fits two tire plugs. That’s four total plugs, ready to plunge into your spurting abyss of sealant to keep you jammin’ down that descent with confidence. Like all Dynaplug products, these are made in the USA by people who love bikes and carry a lifetime warranty. In stock now at Dynaplug. 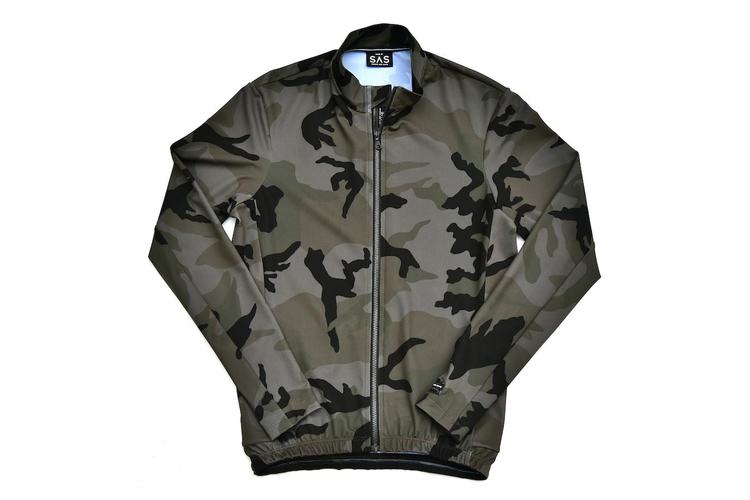 Search and State’s S2-R riding jerseys are back in stock, in short, and long sleeve this year, with a new, monochromatic camo design. These jerseys fit like a performance jersey should, are made from a synthetic blend with Cold Black fabric cooling technology, which is SPF 35+ and blocks up to 90% of the sun’s rays and reduces fabric surface temps by up to 9 degrees. Short and long sleeve S2-R jerseys are in stock now at Search and State. 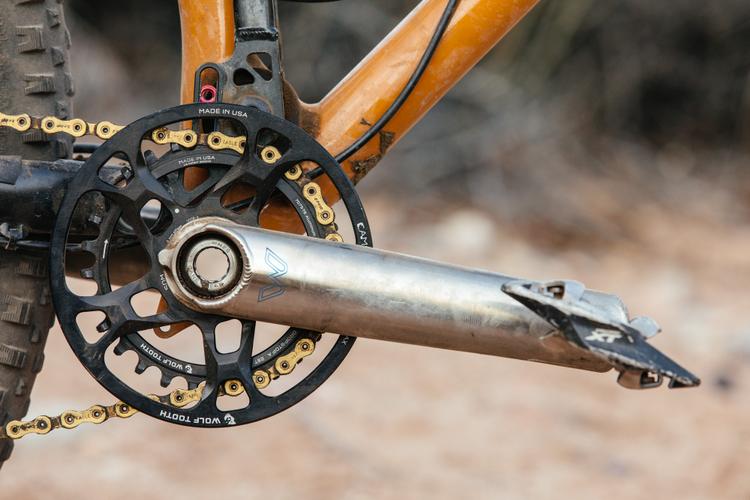 Modern mountain bikes have low bottom brackets. There are many reasons for the push for lower bottom brackets but like each technological or geometric advancement, there is always an effect. One of which is you’re very likely to smash your chainring on rocks with a low bottom bracket and while there is a multitude of bash guards out there, I’ve recently tried out the Wolf Tooth CAMO BashSpider and chainring. Read on below for a quick review of this system on my Starling Murmur with Cane Creek eeWings cranks… 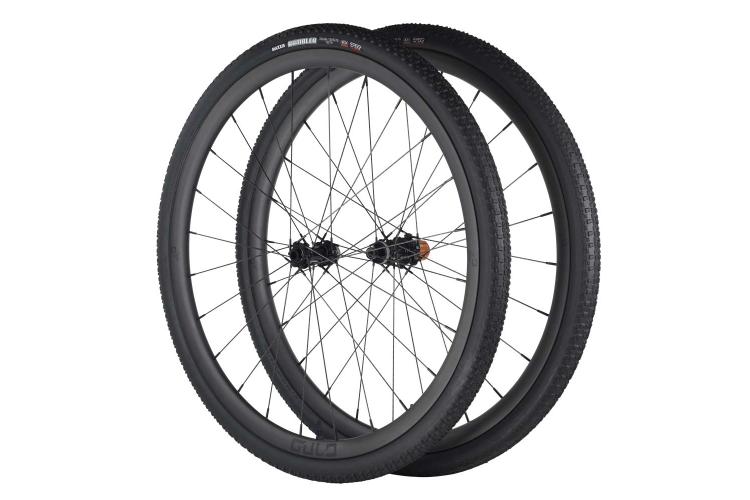 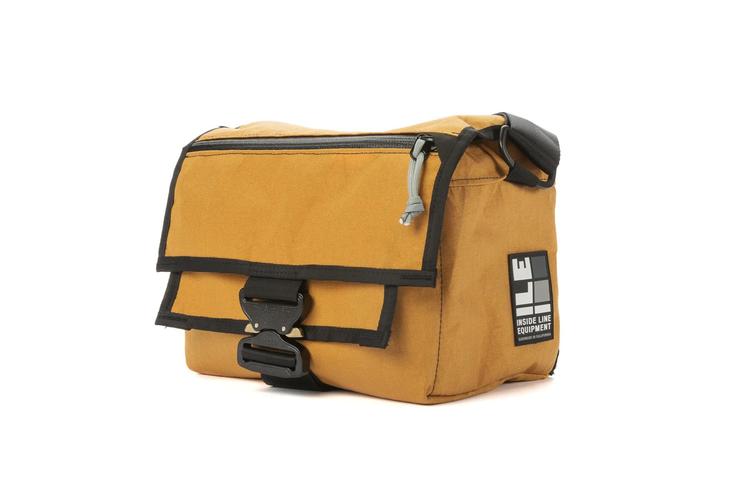 Inside Line Equipment, or ILE for short, makes one of my personal favorite camera bags, and just today they announced it has been updated! The Photo Bag Mini is designed to haul your full-frame camera with a 24-70mm lens, along with a few extra pockets for filters, SD cards, and other accessories. Seriously, this camera bag has traveled the world with me, and is my go-to favorite for city bike photo rides and hikes alike. New for this model is an upgraded COBRA buckle option as well to really up the resilience factor.

The ILE Photo Bag Mini comes in a variety of colors and is in stock now. I just bought one and can’t wait to see these updates in person! 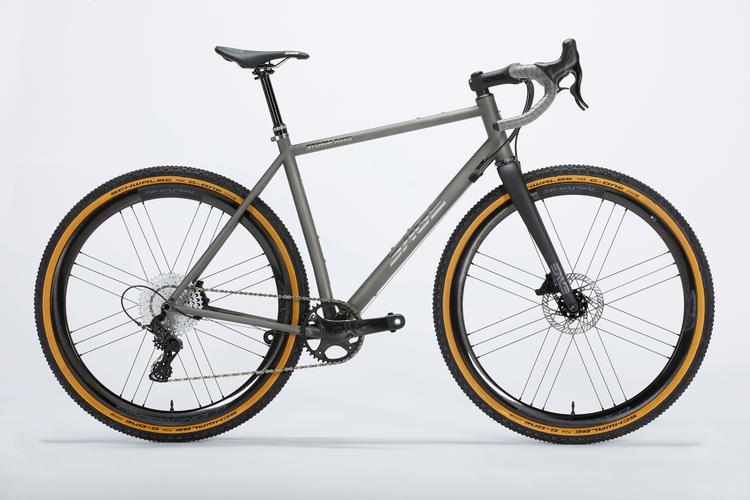 This morning Campagnolo announced their 13-speed gravel groupset dubbed Ekar and similarly, brands rolled out their build kit offerings with the new group. Sage Titanium is one of those brands and they now offer Ekar on their two gravel models, the Barlow race machine and the monster gravel machine, the Storm King. You can now build a Storm King as pictured with Ekar, a dropper, Shamal wheels, and the whole 9, err 13, for $9,500. It might not be for everyone’s budget but it sure is nice to look at! See this build in detail below and check out more at Sage Titanium. 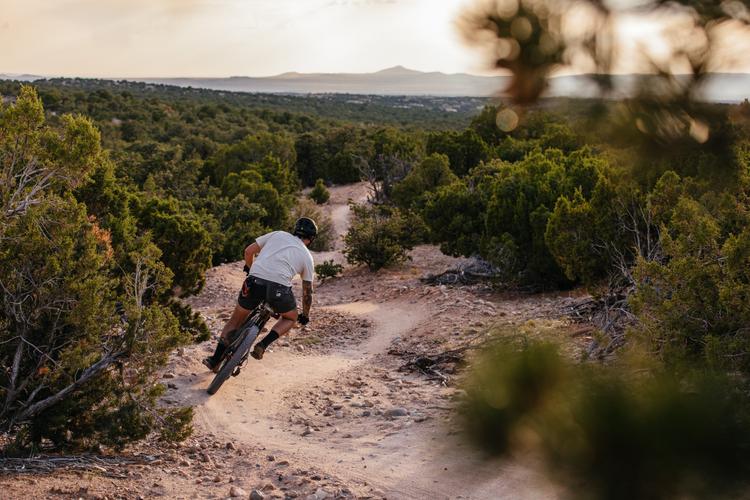 The Pandemic has left people with a lot of free time to pursue new hobbies. How many of your friends became sourdough bakers, xeriscapers, or home improvement gurus with all their newfound time at home? Eric Puckett is a long-time friend who always had sewing skills but once he was forced to work at home and couldn’t spend as much of his time outdoors, he began making bags for cycling, rock climbing, and more. Recently, he made this hobby into a side hustle called Farewell Bags. I caught up with Eric last week to shoot his new bags on his own Salsa Timberjack, so check out more below… 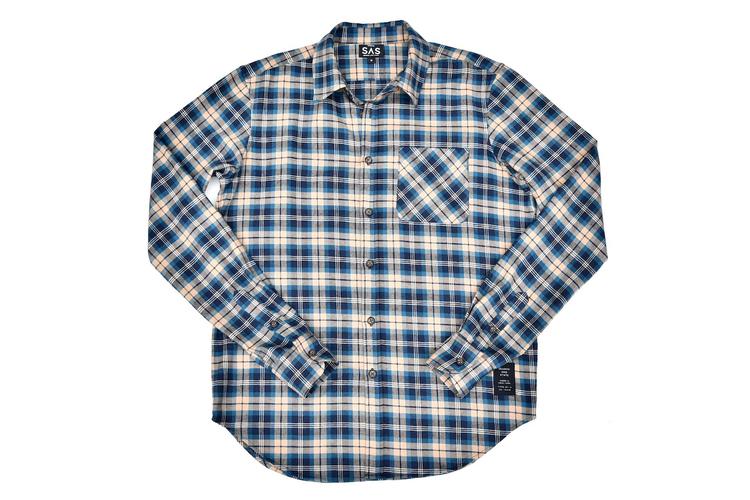 Search and State is known for high-quality, well-designed, domestically-manufactured apparel for on and off the bike. Their shorts are some of my personal favorites as are their jerseys. Their latest product is just in time for autumn. The Midweight Flannel is made from Japanese-milled, yarn-dyed cotton, that’s not too heavy and not too light. This gives it durability and wearability on and off the bike.

Durability: Super High.
Fabric: 100% Yarn-Dyed Japanese Cotton.
Weight: These are midweight flannels. Not too light. Not too heavy. Just right.
Care: As easy as it gets.
Fit: True to Size / Athletic.
Temperature Range: Pretty much all year.

In stock now at Search and State.

No. 22 always dreamed of a better travel coupler system for their bikes and today, they’ve announced that dream has become a reality. This new design, combined with their “Brake Break”, which allows tools free, bleed-free disconnecting and reconnecting of the hydraulic brake line, makes No. 22 bikes even more desirable.

Watch this video for a break-down of this new system in its entirety.

HED’s line of gravel wheels, formerly known as “Eroica”, will now be titled “Emporia”, named after Emporia, Kansas. This change is being made out of respect to the international ride series “L’Eroica”. With this change comes a brand new wheel, dubbed the Emporia GC3 Pro. This wheel is a 30mm deep, full-carbon gravel wheel, featuring a 26mm internal width and weighing in at 1,395g per wheelset.

The Emporia GC3 Pro set is made in the USA and will retail at $2,200. Head to HED for more information! 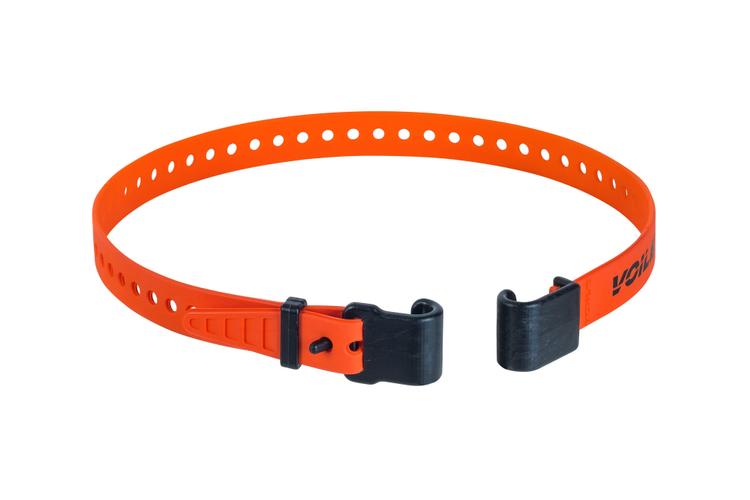 Voile’s original strap was developed in 1984 and not much has changed since its inception. Today the brand announced an all-new system, designed for common 10mm railed racks. These new Rack Straps attach to the rails on your rack and allow you to cinch down to secure your items, without having to loop a long Voile strap around like before. 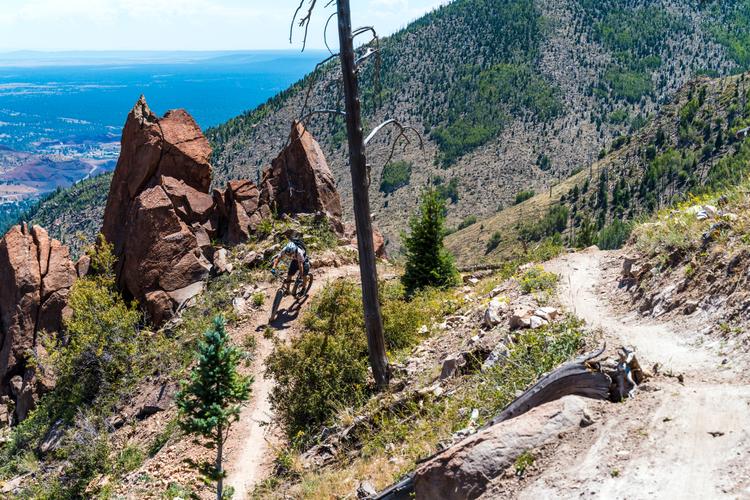 Back in February of this year at Singlespeed Arizona in Bisbee, I had wanted to document the wild variety of funky, freaky, and beautiful bikes that had descended on the small town for the event. Unfortunately, the pace of that particular weekend didn’t lend itself to photographing individual bikes (something I certainly plan to do in 2021). Bike portraits, or not, it’s impossible to ignore the eclectic array of Mone, Oddity, Moonmen, and other eye-catching derailleur-less boutique fabrications and other unusual setups while in that environment. There were a handful of frames though – clean and somewhat understated with swoopy seat stays and moustache-shaped logo badges – that I didn’t recognize. While chatting with Nate from Absolute Bikes, I pointed to a member of Thee Deores (Northern Arizona’s premiere Mountain Biking band) cruising around on one of these swoopy-tubed moustachioed hardtails and asked if he knew anything about the bike. He responded by pointing to Richard May and informing me that Richard, based in Flagstaff, builds bike frames and other custom parts under the moniker Moustache Cycles. 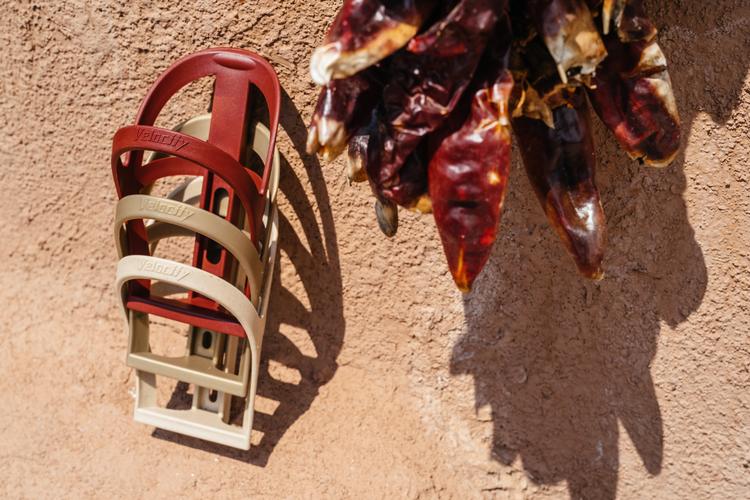 When you see the three new colors of Velocity’s made in the USA Bottle Trap cages, it’s hard not to think of the South West. With the new burgundy, tan, and gold colors they can complement your earth-tone build quite well.  Or if you prefer other colors, there is a wide spectrum available. These are in stock now at Velocity dealers, so holler at your LBS to see them in person. I shot these at Sincere Cycles.