There is often a delicate dance when multiple creative minds collaborate on a project. Let’s take a look at the world of music for an example. The combination of two or more tyrannical artists can often be lackluster if not outright disastrous. Think of all the countless “supergroups” that have fallen decidedly shy of expectations; out of respect for the bands and the fans, we can each conjure up our own lists. There are occasions, however, when minds meld in harmonious magic. There’s a push and pull where something is born amongst the friction that otherwise was improbable. Jay Farrar and Jeff Tweedy come to mind immediately; the brief brilliance of Uncle Tupelo a friendship rooted in creation with a dash of competition, each vying for center stage. Of course, that same recipe would result in the demise of the band. Even as both would achieve tremendous success in their following projects, it’s arguable if it was better music. 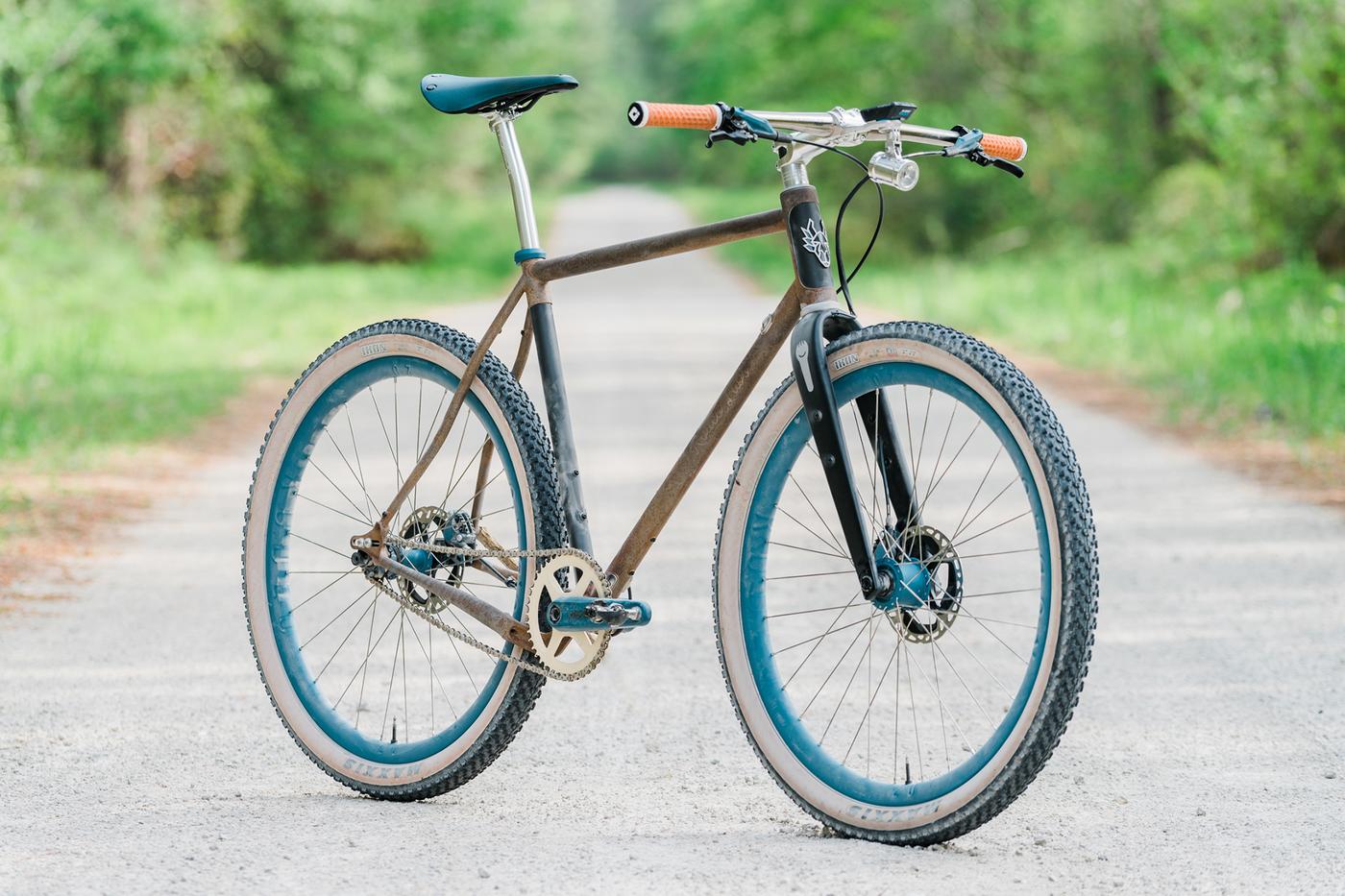 In the world of custom bicycles, these kinds of pairings and one-off projects have often resulted in some remarkable machines. Some notable collaborations are  Ira Ryan and Tony Pereira forming Breadwinner Bikes, Bruce Gordon (ride in peace), and Paul Sadoff collaborating on Schnozzola for the 2016 NAHBS and many builders working with particular brands. While gatherings like NAHBS are on a current unknown hiatus, builders and brands have still been releasing visual two-wheeled treats. 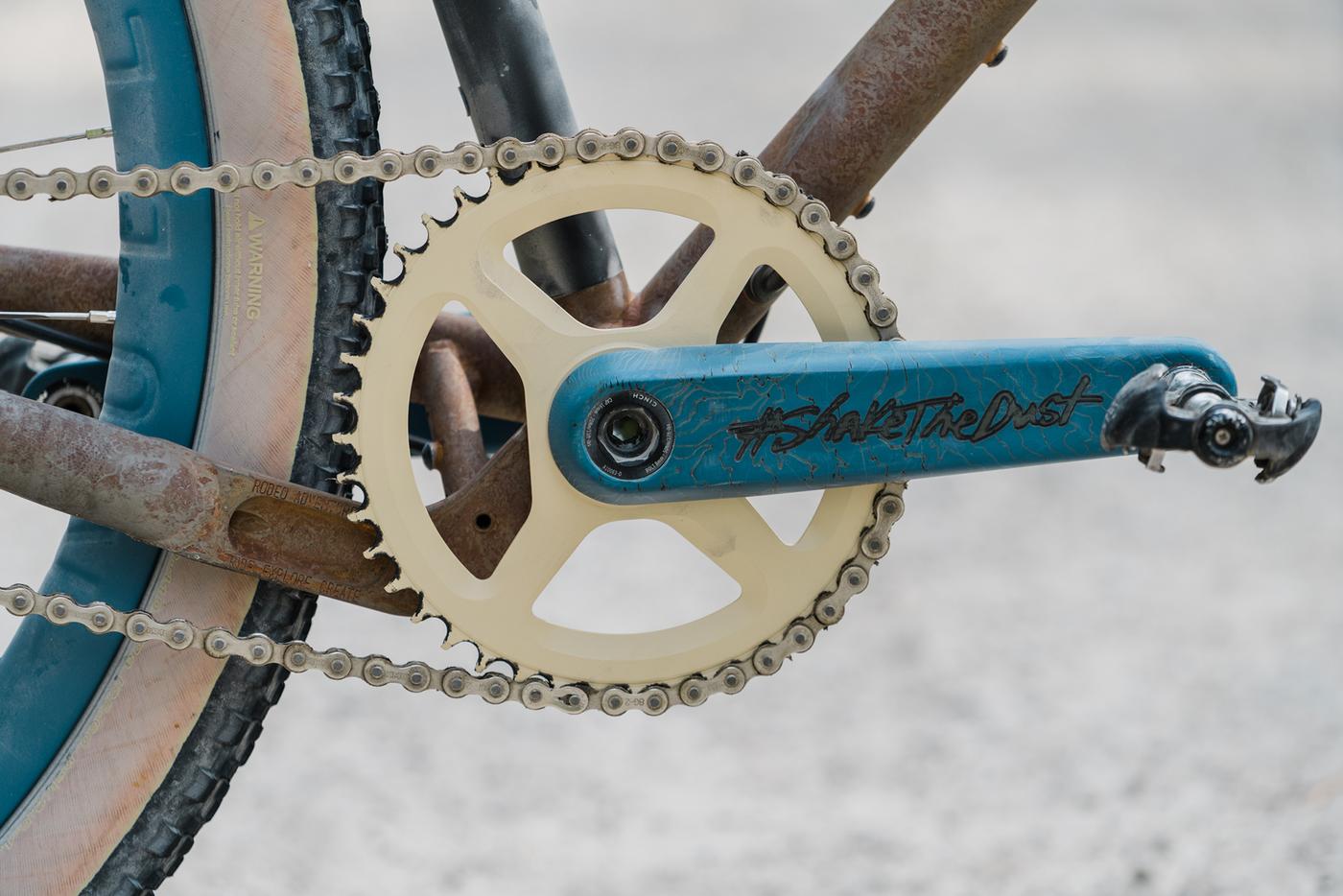 The latest is by way of Rodeo Labs and Ridge Supply collaborating on a bicycle tribute to the Rat Rod. For those not familiar with car culture, a Rat Rod is a lean, mean, Hot Rod often rusty and beaten in its exterior finish while possessing a pristine and powerful engine under the hood. The result is a menacing machine both in sight and sound that goes very fast in a straight line.  Matt Hawkins of Ridge Supply presented Stephen Fitzgerald, creator/owner of Rodeo Labs, with the idea to use their Flaanimal 5.0 model as a canvas. The Flaanimal is a versatile steel frame with plenty of tire clearance, sliding dropouts, plenty of mounting points for accessories, and of course, Rodeo Labs’ carbon Spork.  The result is a monster drag racer for the dirt roads of the Croatan National Forest known as the Flaat Rod. 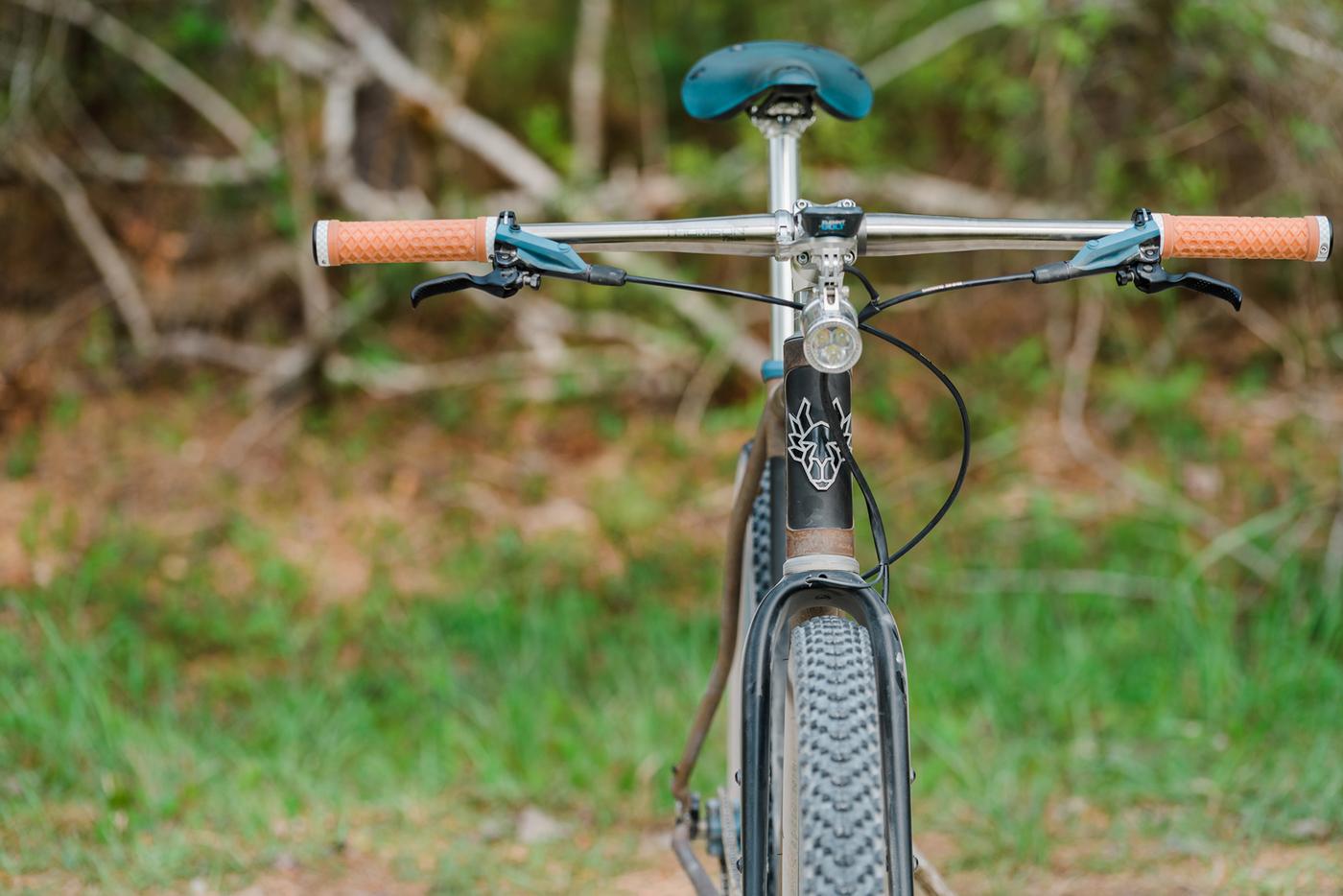 In passing, this bike may look like a forgotten garage find with its rusty appearance, but the Flaat Rod is a carefully crafted machine to the discerning eye. While the steel frame is ever-changing due to exposure to the elements, many parts are protected by Cerakote in a flat blue.  A Shimano Dynamo hub paired with the Rodeo Labs 2.0 Carbon rim power the Sinewave headlight for those forrays into darkness. The crankset is an Easton EC90 carbon, adorned with the phrase “Shake The Dust” synonymous with the Ridge Supply brand. 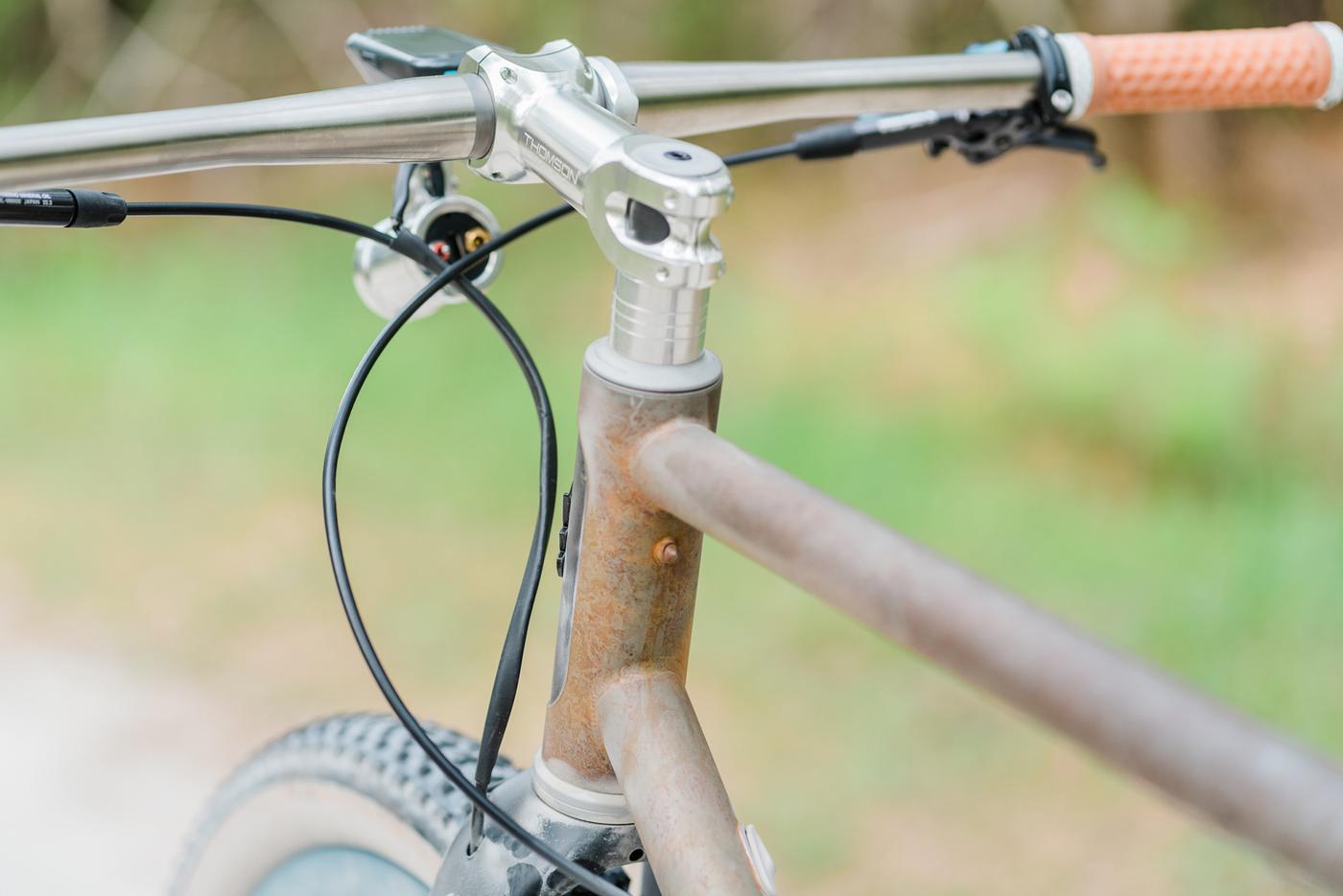 The shiny silver Thomson cockpit resembles polished pipes of flame-spitting Rat Rods, and a White Industry headset is blasted raw to finish the build. Flux Customs, located just outside of Denver, CO, sorted out the finer points and finish of the bike. The etched Rodeo Labs logo in the raw finish is particularly fetching.  Set up single speed and with Maxxis Ikon 2.1 tires to eat up the potholes of the Croatan, Hawkins assured me, “This is no show bike.” 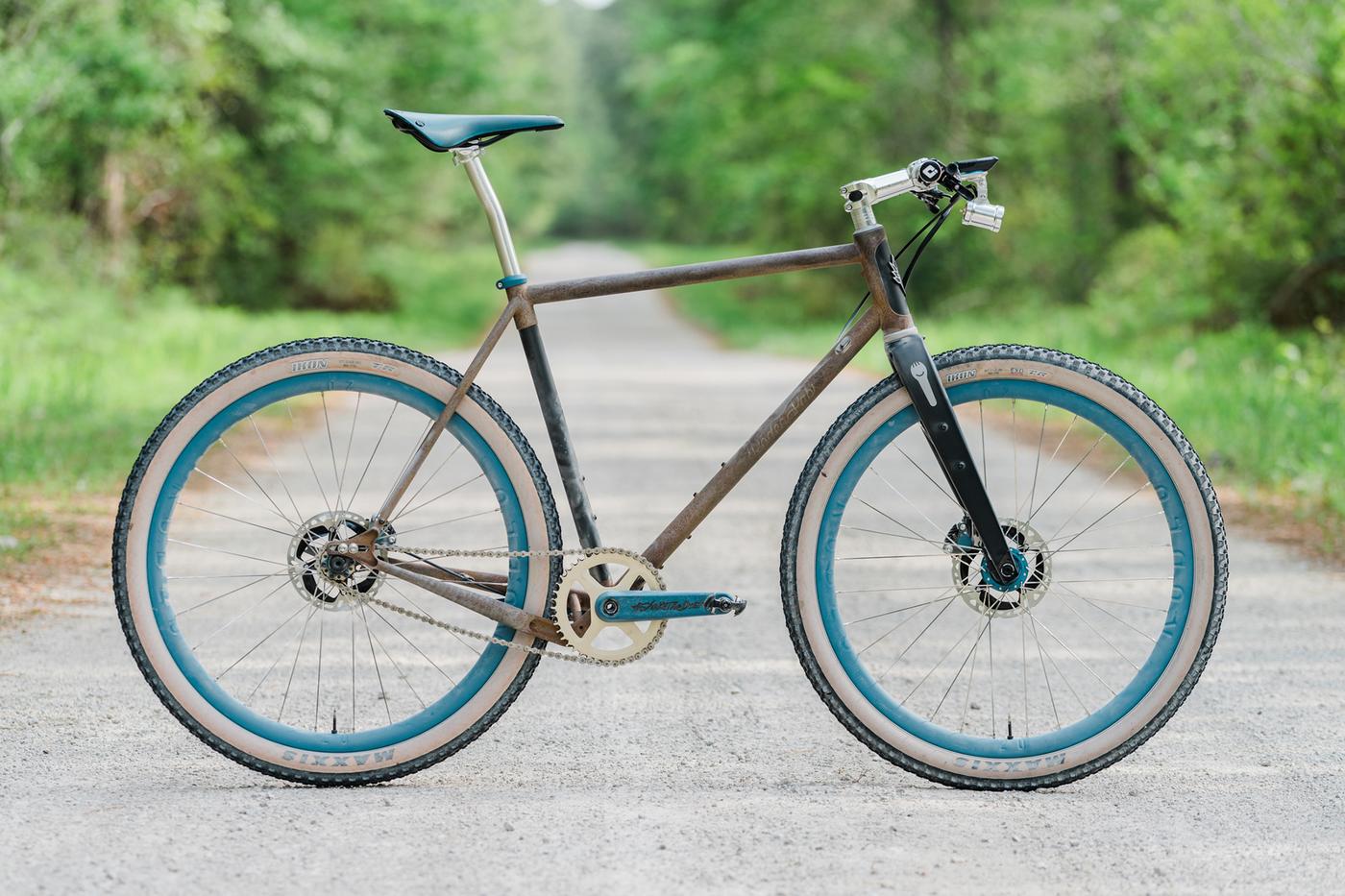 Hawkins will be kicking up dust deep in the Croatan National Forest for the foreseeable future on his new Flaat Rod by Rodeo Labs, and who can blame him, that bike begs for a stiff gear and sprints just for the hell of it…