Having been a resident of western Pennsylvania for my entire existence has given me a supernatural view of real mountains. I understand that they are real, but part of me doesn’t grasp how something so magical and awe-inspiring is there for us to become a part of whenever we choose. Perhaps having grown up in a society where things like the Easter Bunny and Santa Claus were so embedded in our childhood has permanently skewed the collective vision of what is real instead of an illusion. Even when I’m touching the snow or granite rock, the concept that it is me, in the physical form present, and not a dream or a postcard, takes a fair amount of internal dialogue to accept the reality. I often wonder how people who live amongst or have easy access to the mountains react to their presence. It’s no secret that the mountains have held significant influence over creative folks and artists throughout time. The mountains may be the ultimate muse from painters to authors and everything in-between. So when the opportunity arose to spend time with a group of creative people living in the Gunnison/Crested Butte area, making things to enhance their time amongst the mountains, I was delighted. The view of the Mountains from the small town of Gunnison is endlessly stunning. The sharp spires of the Anthracite Range, covered in snow, and the mountains of Crested Butte are just a short drive away. It is late spring, affectionately known as mud season by the locals. The warmer temps mean more stable snow up in the big mountains’ higher slopes, which is how I found myself in a car at 6 am with Chris and Arly of Goodday Bikes + Curiosity Bags. Chris, a custom bike frame builder, and his partner Arly, who makes custom bikepacking and frame bags, are avid skiers. The two met in Park City, UT, while chasing big snow in their twenties and eventually moved back to Arly’s hometown of Gunnison. At the end of the main drag just off of route 50, the two operate of well put together space where Arly sows and Chris puts the finishing touches on bike builds. However, on this morning, spring conditions are prime, and we are off to Crested Butte. On a back street amongst the beautiful cottages of Crested Butte sits Romp Skis. Brothers Morgan and Caleb Weinberg have been making custom skis right in Crested Butte since 2010. The brothers grew up in New Hampshire, but after cutting their teeth on the slopes of New England, they packed up and headed for the Rockies sometime in the 90s. Having the perfect testing ground for their product, Romp has been dialing in their ski and specialty ordered split boards for over two decades. Morgan and longtime friend and employee Andy Shabo loaded skis and split boards into their 4Runner as we pulled into the shop. My nerves were a little on edge; I had never split-boarded or participated in a backcountry snow day in the big mountains. However, I trusted my guides and was beyond excited to be in a place akin to a dream landscape. Piling in our vehicles with a mutual friend and Crested Butte resident Sarah Steinwand, we drove out of town to the trailhead or a theoretical location where the trailhead generally is when it is not under the substantial snowpack. 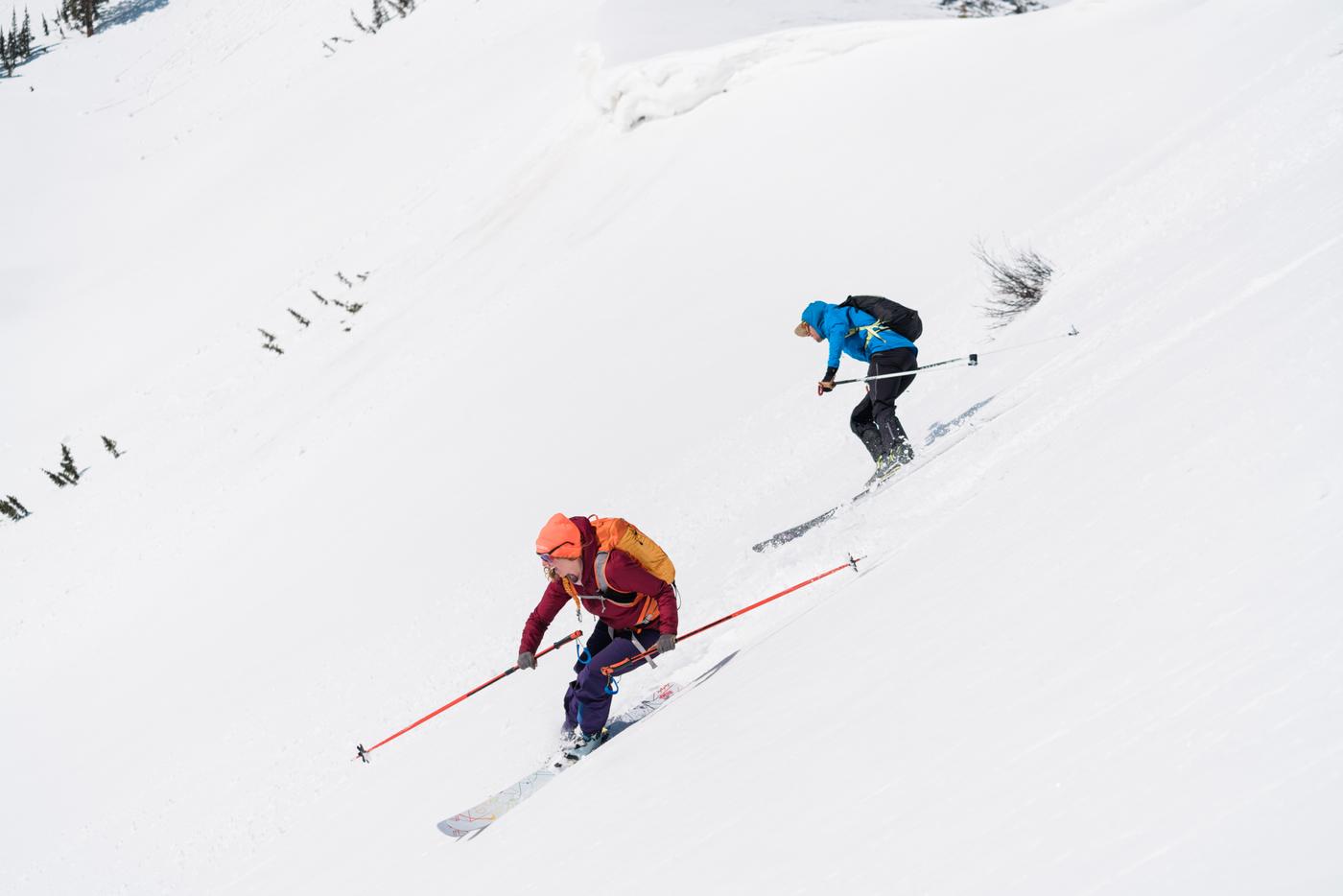 After a quick bindings demo on my borrowed board and how to install the skins, we followed Arly down to the creek and began our ascent up to an area known as Green Lake. My first few strides on the splitboard resembled the awkwardness of a giraffe on ice to anyone watching, I’m sure. Starting on hardpack snow on an off-camber pitch was not ideal terrain for a beginner; I swallowed any sense of ego as I lost the edge and began sliding towards the creek below. Once stable and upright, we headed off into a maze of spruce trees, zigzagging back and forth up steep pitches. Whatever chill the morning held melted away with the effort of lugging our bodies and gear up the mountain. The treeline eventually broke, and we were greeted by a stunning morning in the high alpine. The snow conditions were changing rather quickly, but our first descent was soft and steep; any reservations I had about dropping in disappeared under the first turn. The snow was probably just ok by big mountain standards, but it was all time for an east coaster used to machine-made granular and icy conditions. It took us several hours to earn our first turns, and we headed straight back up to hit the other side of the slope, which would eventually pop us out somewhere near where we started. The open bowl gave way to glades and one final steep chute through scrub evergreens to a snow bridge over the creek. As the last to cross the snow bridge, the pressure was on; walking was not an option as it could cause the whole thing to collapse into the icy water. My successful navigation of the skinny meant we were on to the river to meet our new friend Justin Gallen. Gallen is the owner and sole builder of Raindog Boatworks. Working out of a garage on his brother’s property in Gunnison, Gallen produces beautiful handmade wooden dory boats. Justin’s love for being on the water was fostered at a young age as his father worked as a river guide. Combine that with a youth camp trip down the Grand Canyon, and Gallen was hooked, and in 2009 followed in his father’s footsteps and began his career as a guide. His boat, Joshua Tree, floats in the put-in spot. It is immediately evident that this is not an ordinary wooden boat; the craftsmanship and attention to detail are noticeable even from a distance. Gallen points out a little tape work near the front of the boat, “Took a little damage through the Grand Canyon,” he remarked. Piloting the Joshua Tree through the Grand Canyon was a sure way to test its quality. Gallen recounted tackling the 15-foot swells they encountered on their voyage, noting that his dory “handled it with no problem.” Today would be Gallen’s first foray on the Gunnison River since moving to town. At this time of the year, the water is just reaching levels that scraping the bottom is more of a possibility than a certainty. Justin and Andy board the Joshua Tree, and the rest of us join Morgan Weinberg on his blue rubber raft. With no threat of Canyon like swells, we enjoy a nice float back towards Gunnison. Taking time to relax in the eddies and get a chance to ride in the dory with Justin, it’s easy to see why locals enjoy the brief window of ‘mud season.’ The winter crowds have gone home since the resort has closed, and the summer crowds haven’t quite arrived. Snow keeps the mountain bike trails in Crested Butte covered for at least another month, and fair weather campers aren’t super keen on the freezing temps’ overnights in the high desert. We navigate the last couple of sections of our day through the white water park; for now, the slight waterfall drop seems like a novelty, but the swell there will be pumping hard enough for river surfing in a few weeks.

Our pull-out spot on the river has put us back full circle across the street from the Goodday/Curiosity shop. There are still a few hours of daylight left, and between Chris’ and Arly’s bikes and one David Bowie-themed gravel bike from her father, there are enough Gooddays to go around. During warmer months, Arly and Chris host little evening gravel rides with customers and friends, so we took the opportunity to squeeze one in on what was turning out to be a perfect mud season day. 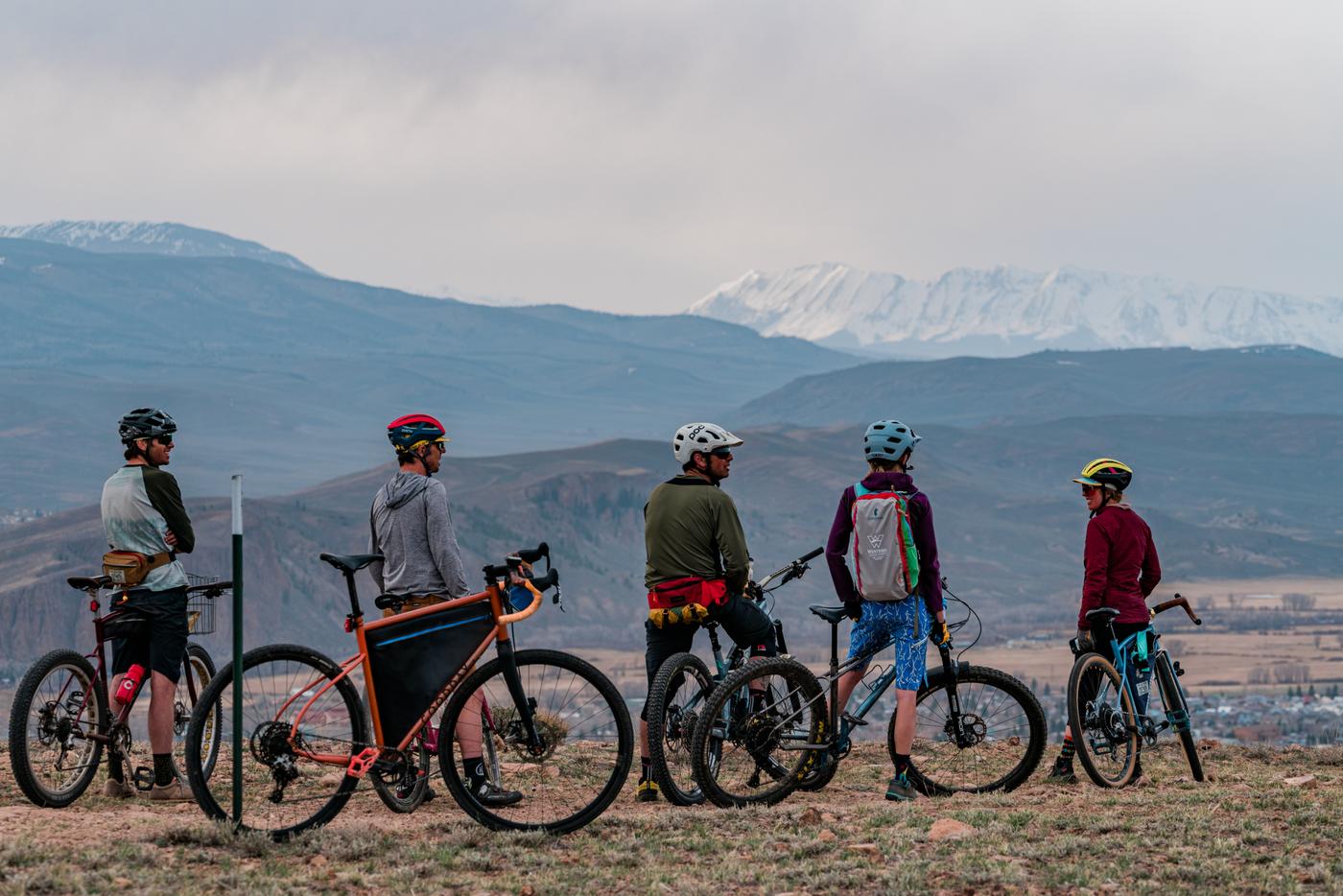 Jumping a gate that Arly insured us was to keep out the local off-road communities’ trucks and jeeps, we headed off into the sage scrub under the evening sun. We saw a fox trotting inside an irrigation ditch as we headed towards a loose and rocky climb: the bounty of our efforts, a view of the total of Gunnison and its surrounding mountains. Arly pointed to mountains they would still like to ski, and Chris and Andy discussed the upcoming mountain bike season. To our west, Hartman Rocks glowed in the descending sun rays. In the town below, a hot meal awaits at The Dive, and after a full day of enjoying just a little bit of what this area offers, the group is ravenous not only for food but for more days just like this.