We’d like to think we’re pretty alright at photographing bikes over here at The Radavist. The steeds we choose to document reflect our audience’s preferences and capture distinct trends in bicycle design. Yet, each year as we reflect on all the builds that have rolled through this cyber showroom, we’re always surprised to see what the Top Ten list reveals. This year, we’ve got a good mix of bikes, outfitted with flat and droopy bars, running rubber across the size spectrum, and made of steel, aluminum and yes, even carbon. Let’s get to it! Amy Danger‘s Cinelli Laser Rivoluzione was a no-brainer here but little did we know it would garner three times the eyeballs as the others on this list. Amy clearly struck a chord with, not only our’s but, your heartstrings.

“The 80’s and 90’s were a wild time for track bikes as design teams competed for gains through technological innovation. Cinelli was right there in the melee shaving power loss through aerodynamic design in partnership with Columbus tubing. The resulting Cinelli Laser changed bicycle design forever, winning more track world championships and Olympic gold medals than any other bicycle in the history of the sport. Andrea Pesenti’s hand-hammered steel gussets curved elegantly between tube junctions producing a fluid, edgeless art that slid through the air and whose DNA can be seen in all of today’s curvy carbon racing machines. Antonio Colombo brought vision and fidelity to art in design. Paolo Erzegovesi brought revolutionary engineering through liberation from lugs telling him where tubing should intersect and at what angle. These customizations nudged riders over the finish line first and set off raging bike crushes on Lasers that some of us never recovered from.” 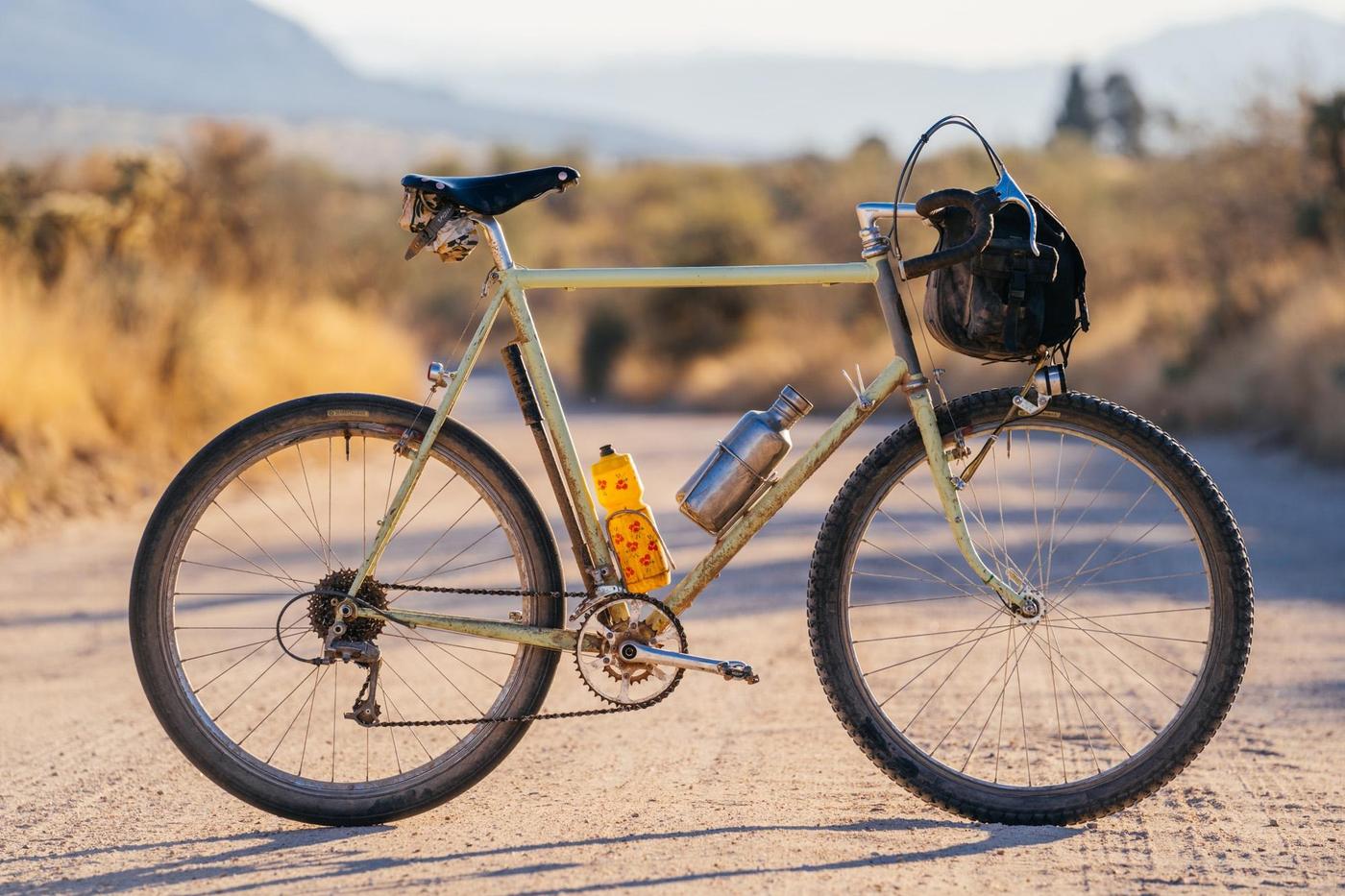 02 – Rubber Baron Ronnie and His 650b Ultradynamico Crust Romanceür Canti

Is it the bike or the prose? We’ll never know but it ain’t a Top Ten list without a Ronnie Romance bike. The Crust Romanceür is a cult-favorite in the alt-cycling circle…

“The ROMANCEÜR is a swashbuckling tender heart of a fantasy warrior, who not only seduces its rider, but acts as a psychedelic aphrodisiac on the psyche. Together you become thee Romanceür, a sacred, lustful partnership rendering all riding surfaces swooned out and speechless, pining for an intimate evening including a tray of rosé Jell-O shots.” 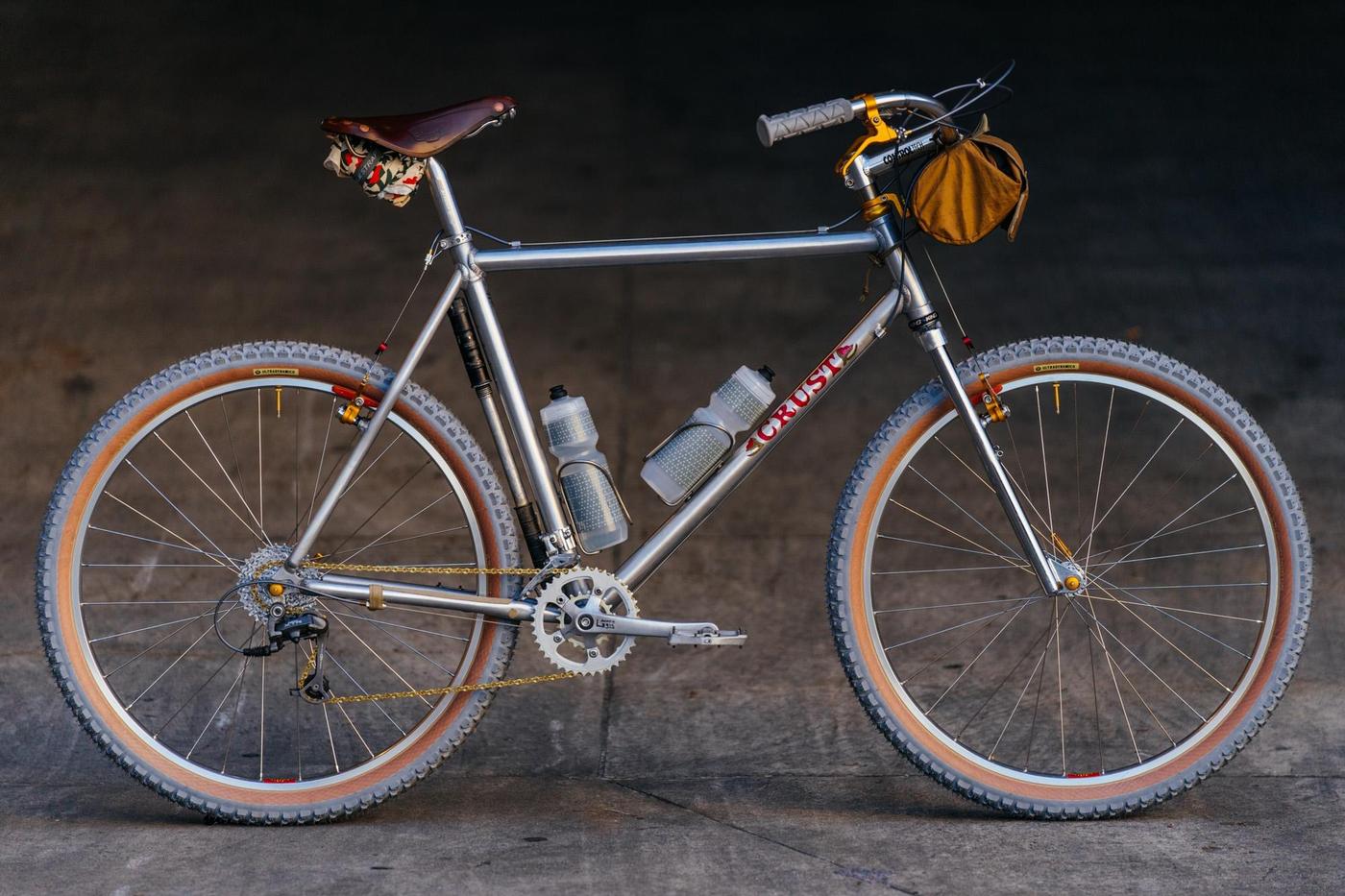 Whoa, whoa, whoa! Two bikes, back to back? This must be some sort of cycling Illuminati conspiracy! You may be wondering if Ronnie bribed us with handlebars and bags. Nope. Y’all love this dude. Hell, we do too.

As Ronnie puts it:

“This bike is designed to move through the mountains and hills of the resulting ‘geologically tortured’ river valley. This build is 26lbs, and can be ridden or carried just about anywhere, and connect all the smoother roads in between. Aluminum is a fantastic, lively, and lightweight frame material — victim of a big bike industry conspiracy theory to push carbon in the early 2000s. This bike is a culmination of everything I’ve learned in my bike lifetime.” 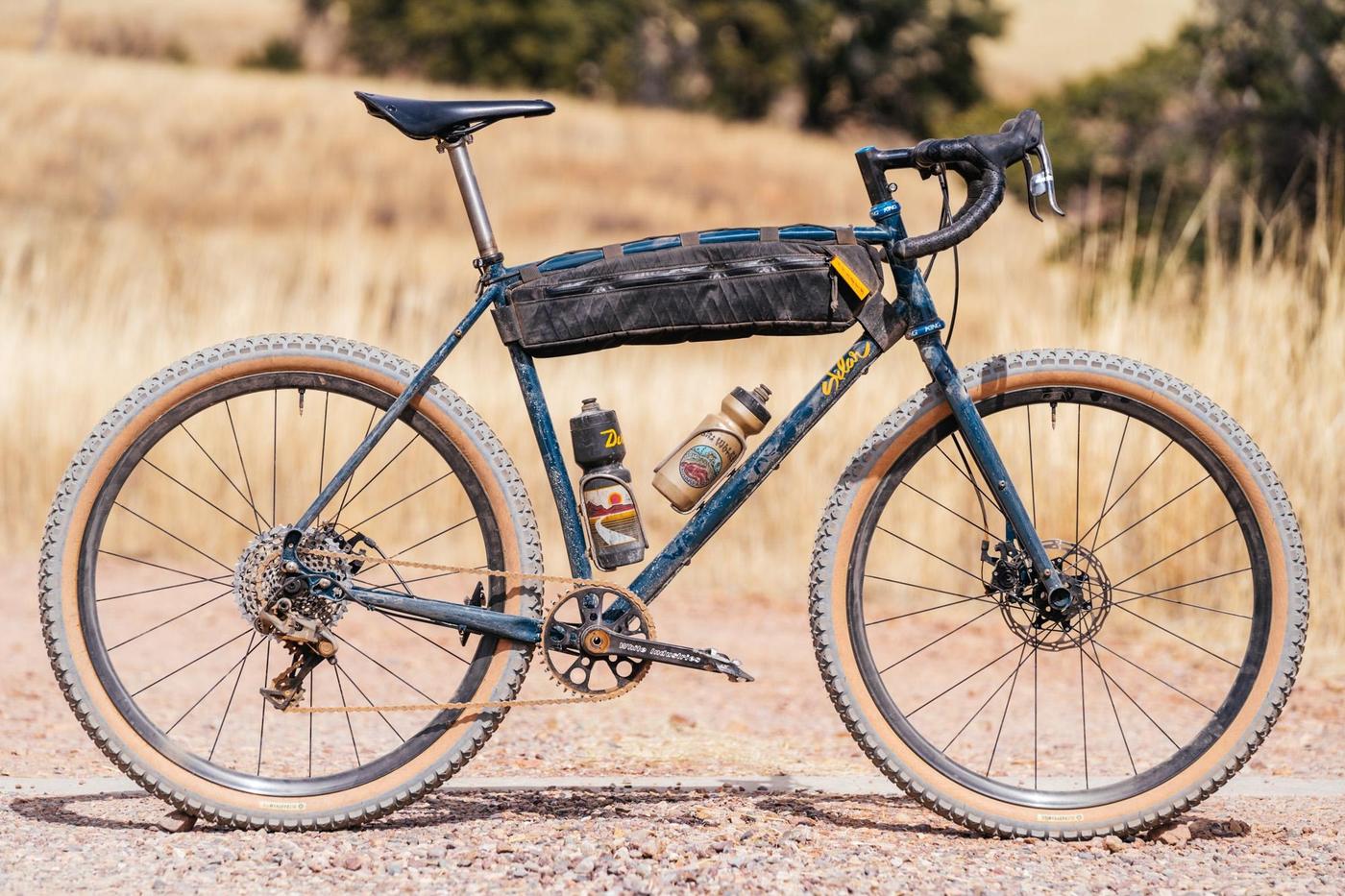 The Super Something is the first Sklar Bikes that are made in Taiwan. Adam made this bold move to make his brand more accessible, while offering a frame not really addressed by the industry at large. Big tire clearance, steel fork, curves for days, and yes, these bikes are light! We might have Something (extra) Super on the way with Sklar this year, too!

“Keep it simple. In our eyes, every ‘Gravel Bike”\’ falls somewhere on the spectrum between a fat-tired road bike on one side and a mountain bike on the other. This one is about 40% of the way along that spectrum. Not going for full-on new school MTB geometry – because there is something really fun about riding a road bike where you aren’t supposed to – but also not turning a blind eye to the developments we have made on bicycle geometry in the past few years. Generally, these bikes have a slightly longer reach. They are made to be ridden with a 60-90mm stem for optimal handling. They are designed with 700x55mm tires in mind, but will clear larger or smaller depending on where you want to ride or what you want to try. Trends come and go, but this frame is set up to stick around for a long time and handle those standards you will always fall back on.” 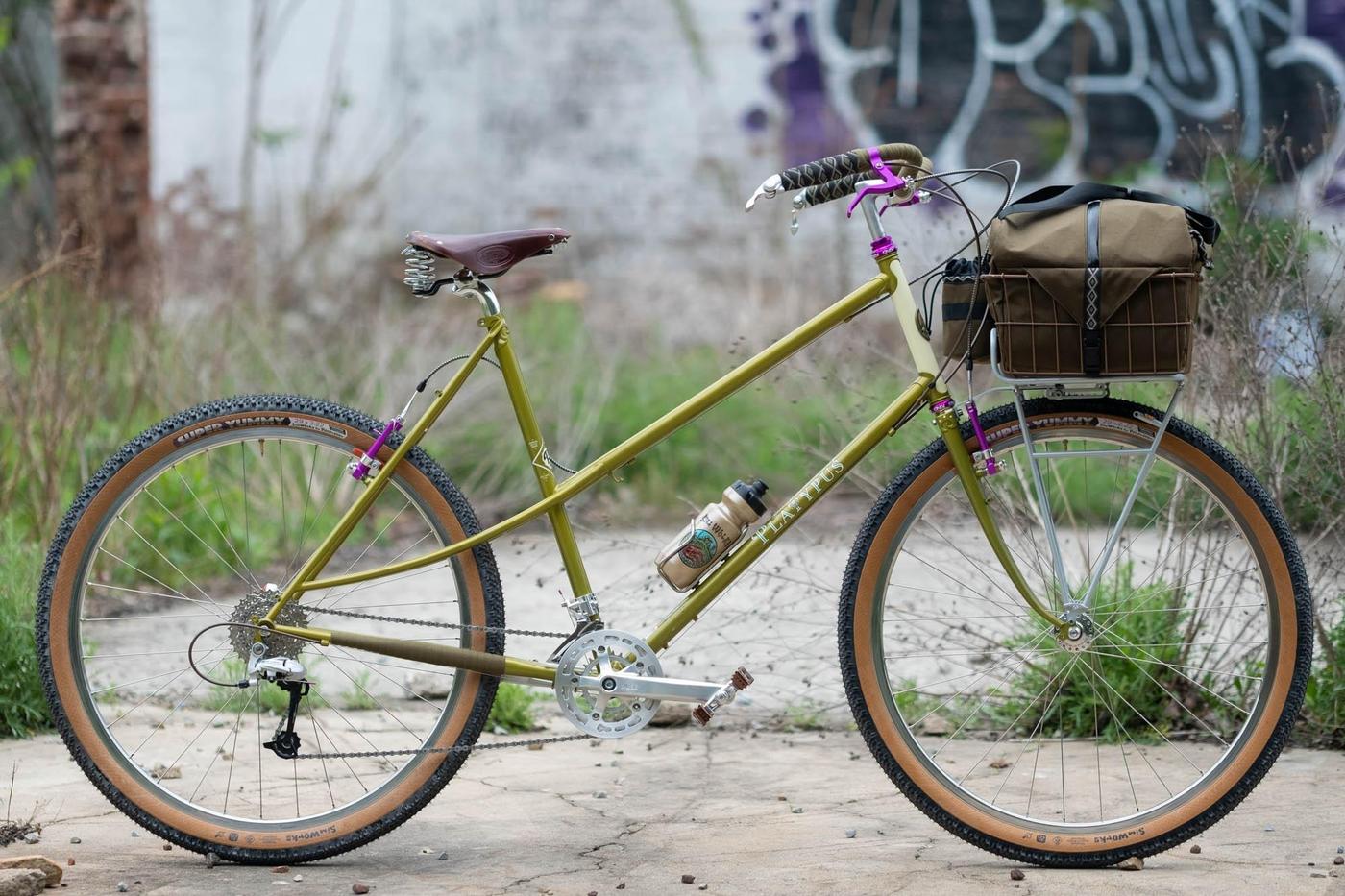 Jarrod and David are holding it down in Johnstown, PA with Hope Cyclery. After a few years, the shop has won over a loyal customer base in the Northeast, including Andrew, who went head-first into bikes and commissioned Hope to build a sick Riv!

“Andrew went from zero to 100 over the course of a year, spending a bunch of time on his bike, ripping everywhere and conquering mountains, and eventually, as one does, started falling for the sweet romantic allure of a Riv of his own. That’s where we at Hope Cyclery came into play. As a larger cyclist who is well beyond the ‘normal’ size and scope that seems to have been established by the cycling industry, I have broken more parts just riding along than I can count. But, with that knowledge, Andrew and I went to work on making the dreamiest bike for someone of his stature.” 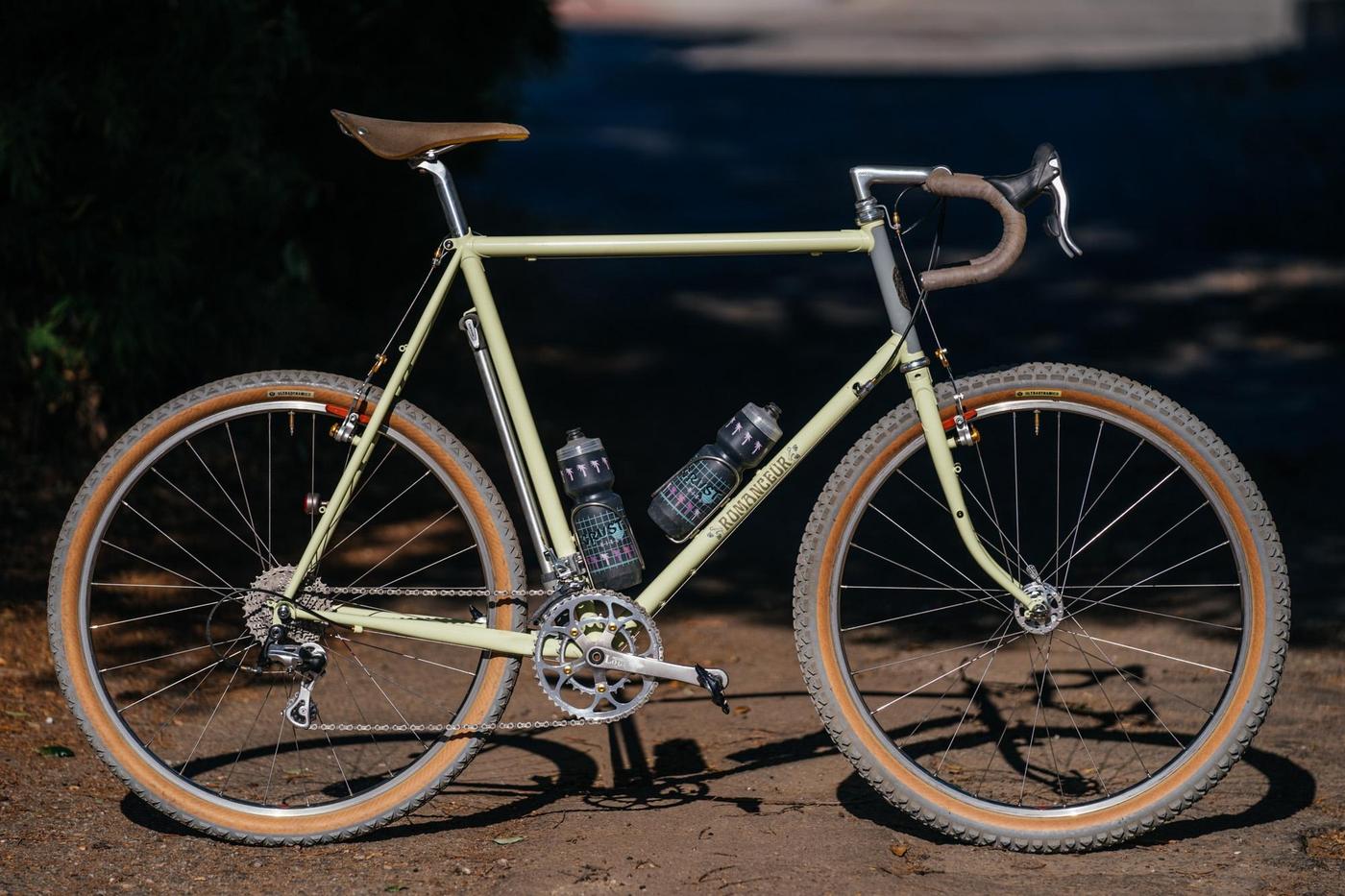 What’s this? Some sort of Crust Bikes conspiracy? Or is it more Rubber Baron corruption? Well, yeah, actually. How else can we afford to put Ultradynamico tires on our all bikes? We gotta get our palms greased somehow! ;-) Jokes aside, we know y’all love this Ultradynamico Duo, so here’s a look at Fast Patrick’s interpretation of the Romanceür, complete with a Campy Centaur groupset, Ritchey Logic square-taper cranks, and many other fine details.

“The Romanceür has gotten a lot of love over here at The Radavist since its inception in both the disc and rim brake versions…. At the LA Invitational, John caught up with Patrick, the other “Rubber Baron” in Ultradynamico, who had just picked up a new frame from Crust Bikes… we love the dynamic duo from Ultradynamico. They’re the same but different. Ronnie’s builds are always some clever hack of 7,8, or 9-speed components, well used, filled with beausage and drenched in olive oil for maximum efficiency. On the other side of the Ultradynamico coin is Patrick, who I like to call Fast Patrick these days.” 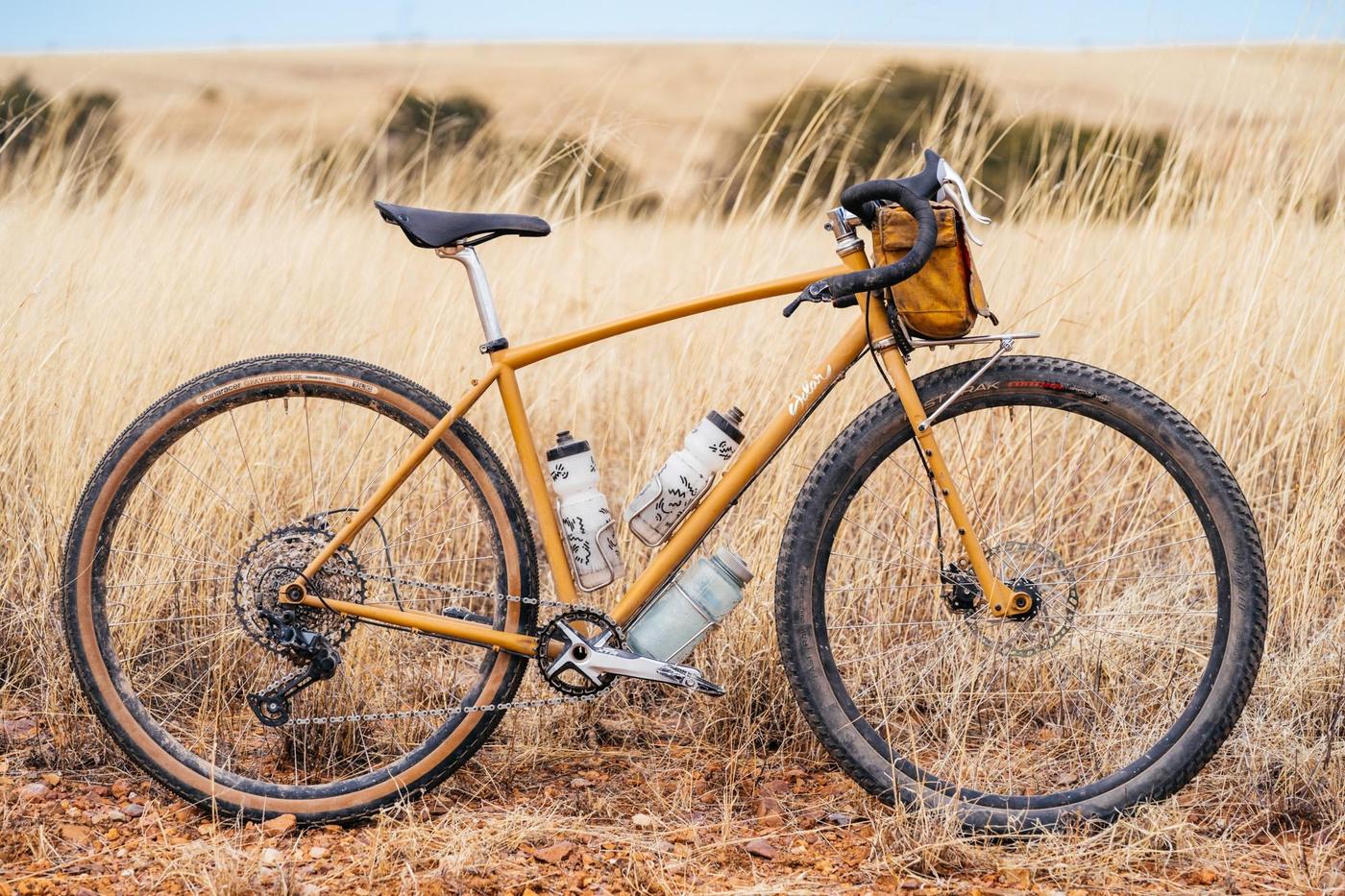 Drop bars, fat tires, and that gentle curve. Must be a Sklar (duh). We knew we’d be seeing this noble steed (and handsome bloke) again after watching the metrics of Jordan’s bike grow like a sunflower.

“Jordan is a bike mechanic by trade but lately, he’s been hanging out in Southern Arizona putting in miles on this beautiful machine. You can tell by that golden tan he’s sportin’. This bike was designed along with Adam Sklar to take on rough and rugged two-track, cross-country tours, and everything in between, literally. Jordan rode this bike from Montana to Texas and various other long-distance tours. For the past few weeks, it’s taken him all over the San Rafael Valley and beyond.” 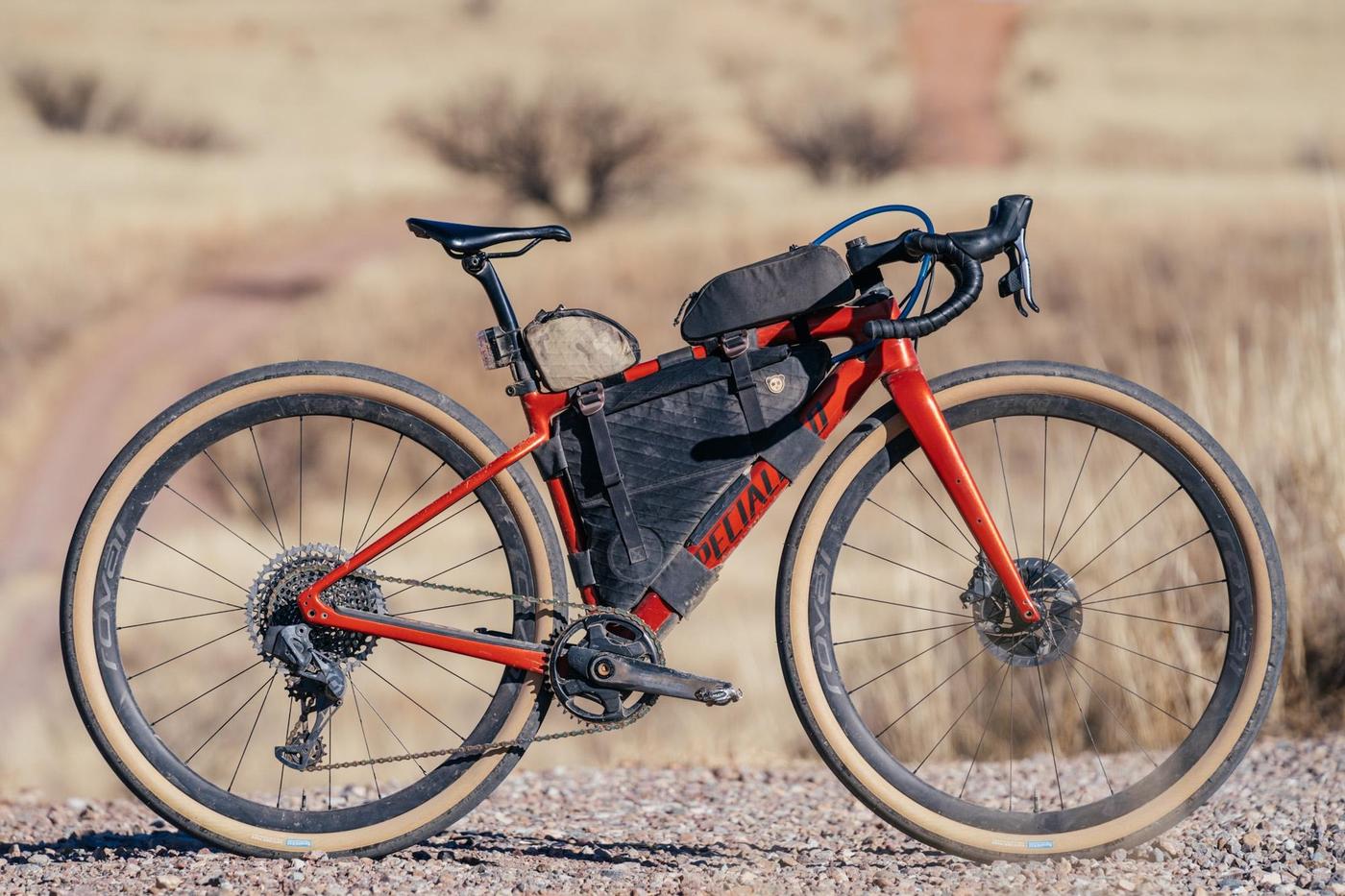 Earlier this Spring, John fled the blustery winter of the Southern Rockies for the grasslands of Southern Arizona where he, Josh, and Sarah Swallow went on a lovely spin around Engin. In year’s prior, Sarah’s bikes have done really well in the Top Ten lists and this year, her Diverge was no exception!

“As pictured, this carbon chassis is rolling on 700c x 48mm Rene Herse Hatcher Pass tires but for her rowdier routes, Sarah also puts 27.5” x 2.2” Rene Herse Umtanum Ridge tires on to offer just a bit more cushion and traction on the loose doubletrack. Her bars are 46cm wide ENVE Gravel bars and the Rogue Panda framebag offers plenty of cargo space for water, tools, and other ride essentials…” 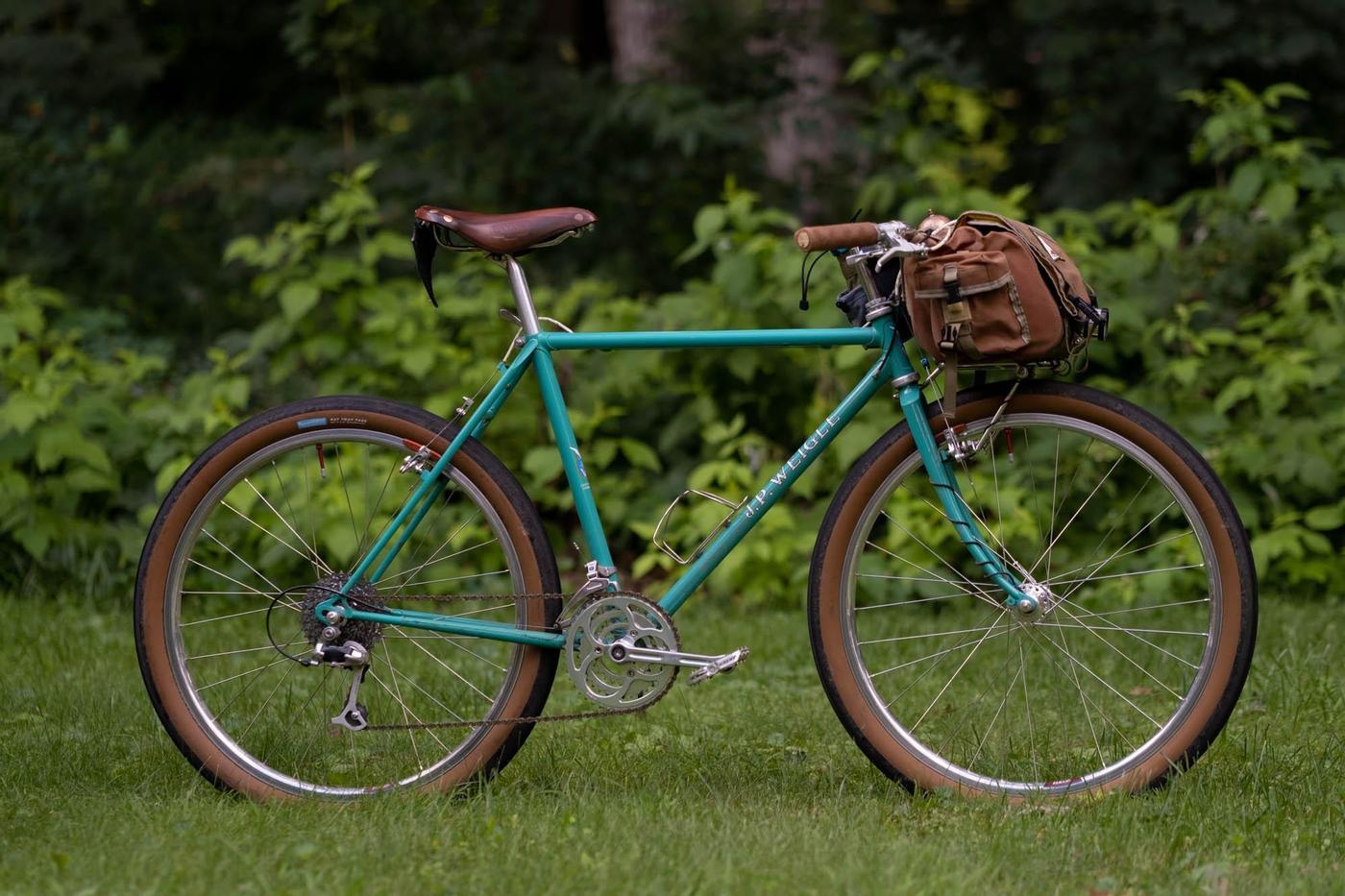 How amazing is it that a vintage road bike makes a top ten list? Especially when it’s a byproduct of many wonderful people. Jarrod and Ballz really nailed the synergy here with this one.

“I met Ballz last August while riding around Brattleboro VT. Afterward, I was welcomed back to Nutmeg Country for pizza, more group rides, and tour guiding. While there I spent the night in Ballz and Troy’s garage, also known as the Nutmeg Country Historical Preservation Society Of Alt Cycling, or something along those lines. No, really, they had it all: everything from prototype Crust Leather Handlebars to prototype Nor’Easters. So, seeing a one-of-a-kind J.P. Weigle wasn’t out of the ordinary, but I didn’t quite grasp what I was looking at.” 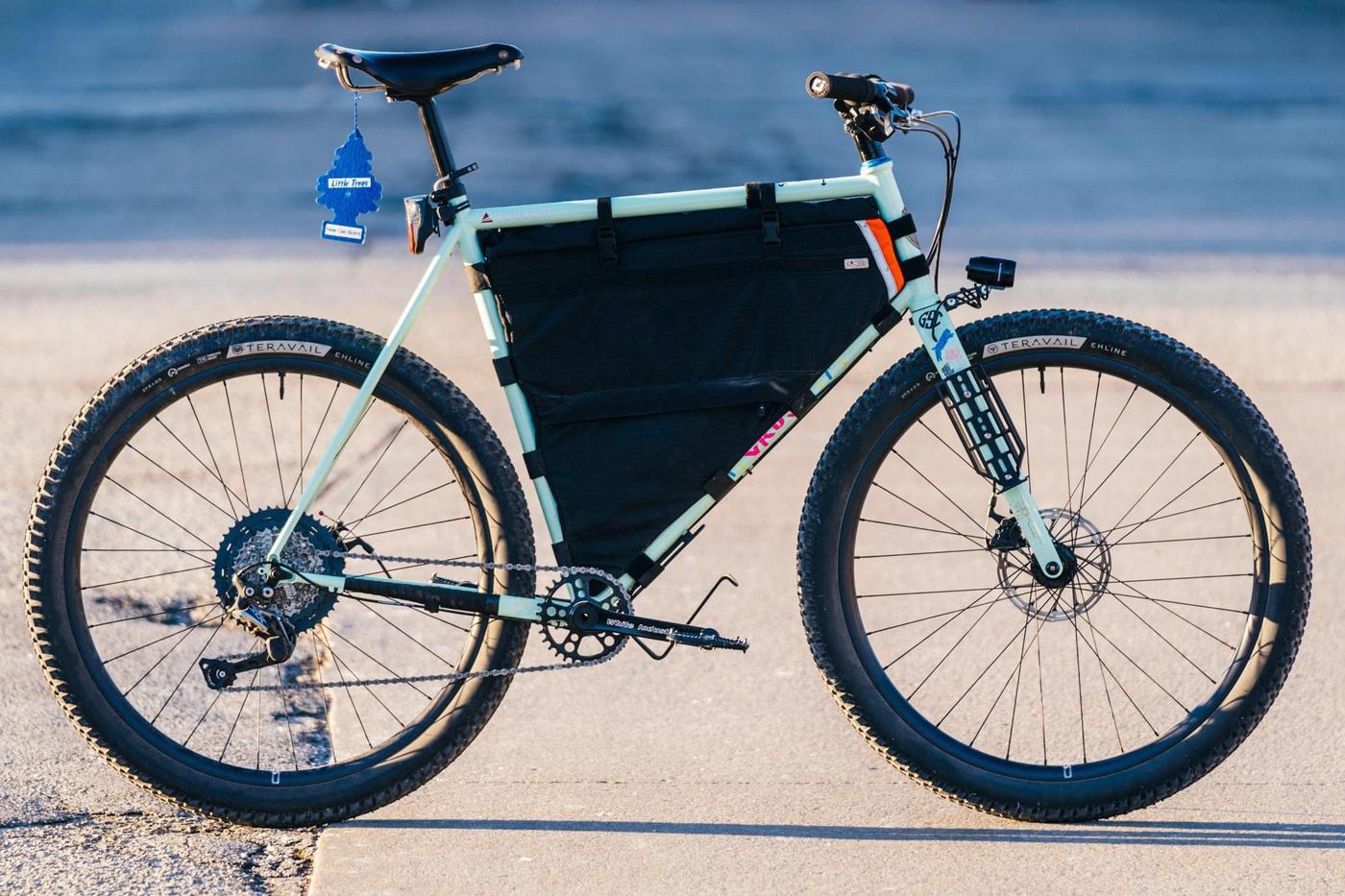 The Crust Bikes Evasion Lite seems to be a crowd fav. As is Jared, for that matter. Oh yeah, and y’all love The Mid South too. I guess you could say this bike hit the trifecta!

“This Crust Bikes Evasion Lite is a tourer, ’round town, singletrack, dirt road, jack of all trades build. With a flat bar, he can run a Shimano SLX rear derailleur with Paul Klamper brakes and levers, which are mounted to DOOM bars and a Paul 22.2⌀ clamp stem. To soften all that metal, he wrapped the bars with Newbaum’s tape.”

That’s it for this year’s Top Ten Beautiful Bicycles. Did one (or all) of your favorites make the list? If we didn’t post yours, call it out in the comments!

Note that this list encompasses featured builds, not reviews. We’ll have our Top Ten Bike Reviews on the way…