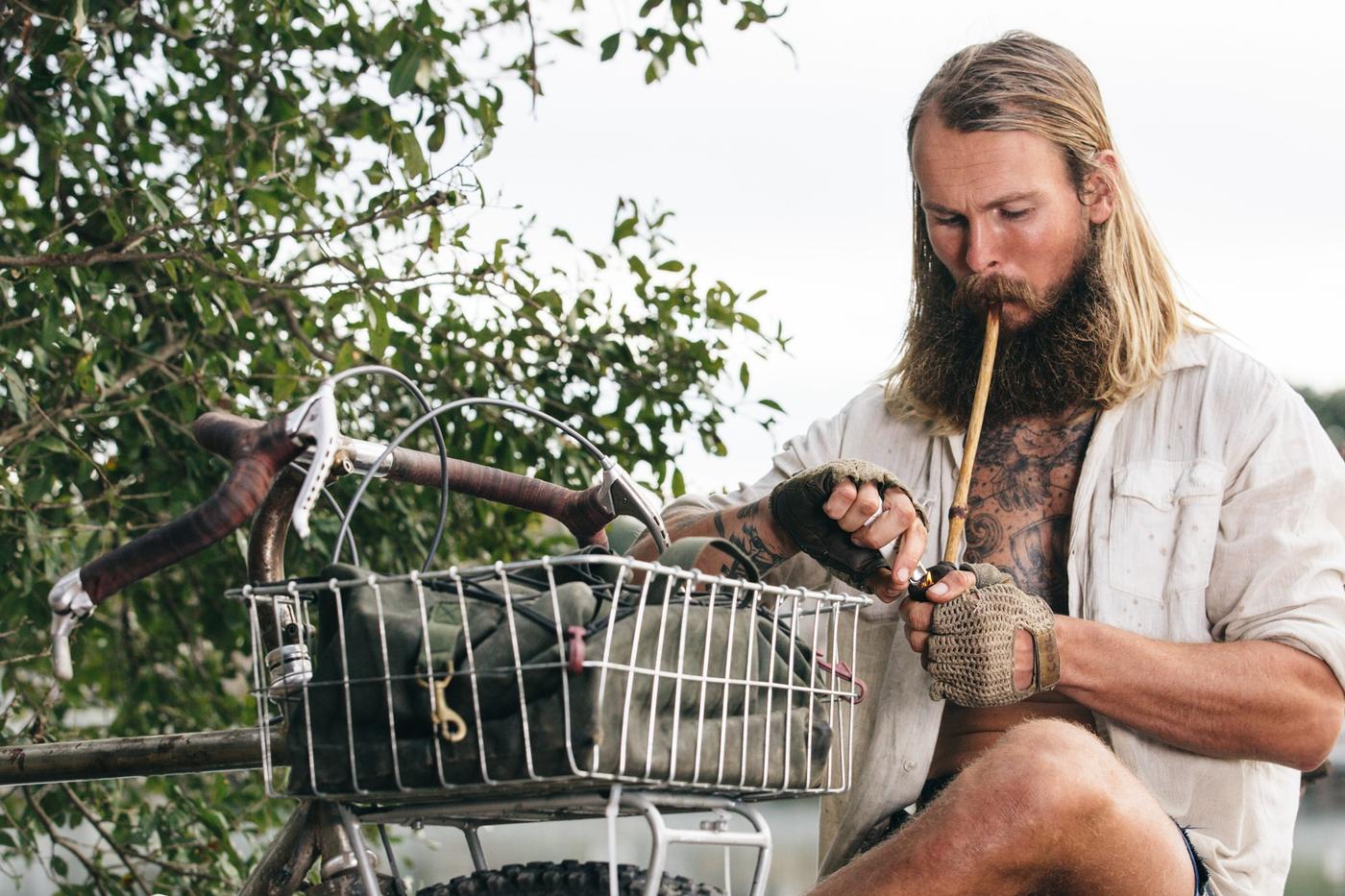 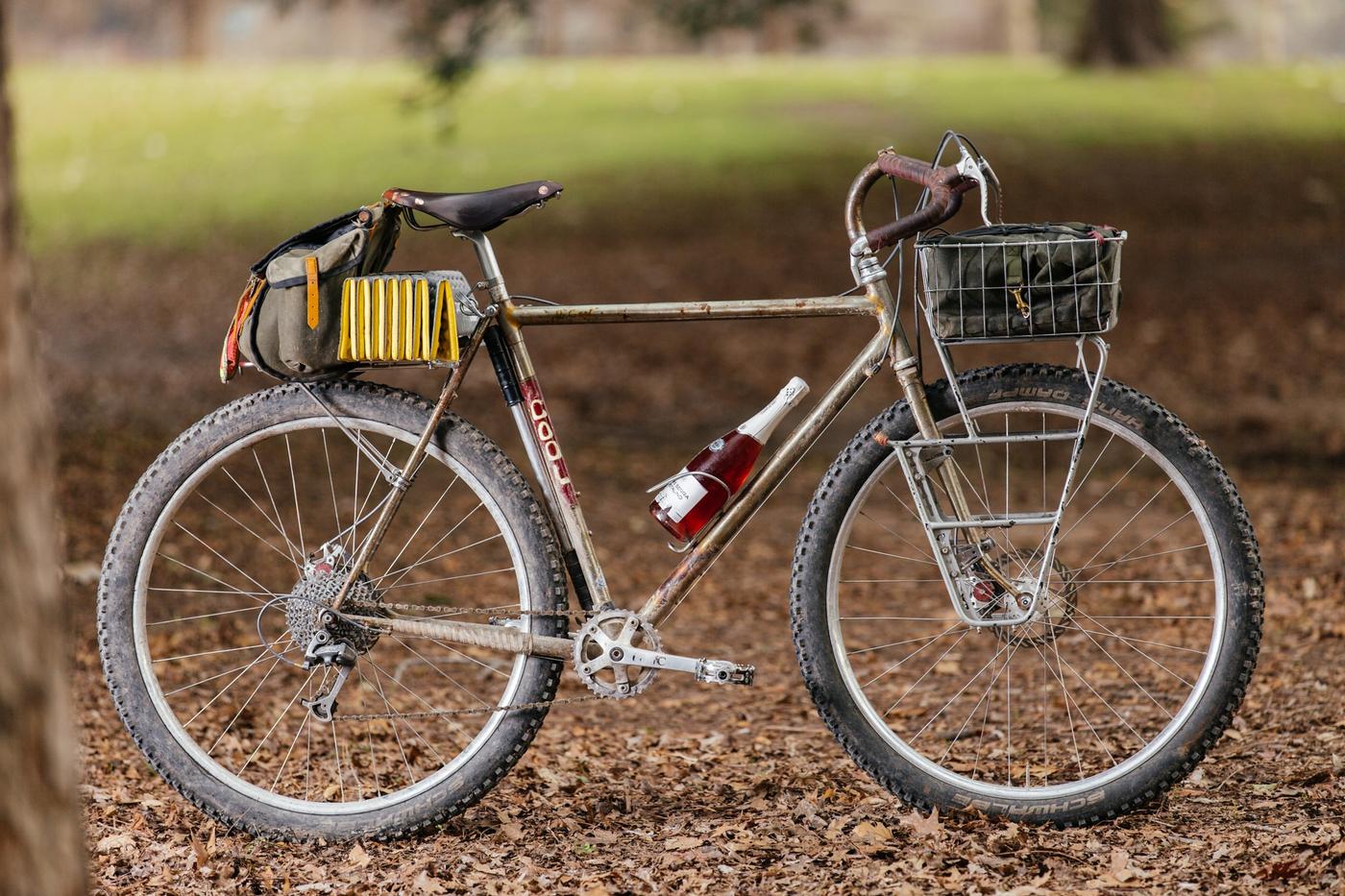 When I met Ronnie, he used to sofa surf around the American West when he wasn’t slingin’ fish off his pop’s commercial fishing boat. The down season for fishing meant it was time to tour around the country, leaving breadcrumbs of neo-retro bike KVLT fascination with every new town he visited. An Ultraromance run-in was like spotting Big Foot back in those days; every sighting came with elaborate stories, “Did you see he rode Mailboxes (a particularly rowdy trail in Santa Cruz, CA) on a Krampus?” “I saw him in Sedona on the same bike!” “Was that Benedict on the UCI Downhill live feed in Norway?!?!”

These days, you’ll find Bené René Ramsey on tree-lined doubletrack skidding leaves, smoking a titanium pipe along the Connecticut river like a biking Bilbo Baggins, slinging his bags in Nutmeg Needleworks, or testing out Ultradynamico proto rubber on his classic Italian road bike.

He’s embraced his roots and settled down in a homestead with Arya, his partner, and enjoys a local community of a supportive group of like-minded cycling superheroes. In doing so, a sense of regionalism and appreciation for this quiet corner’s vernacular country have (semi) grounded this once two-wheeled wayfarer. Ronnie, Arya, and everyone associated with Ron’s Bikes loves making products in good ol’ Nutmeg Country along the Connecticut River Valley.

… and how could you not fall in love with the area? Hailey so eloquently described it in her Nutmegger post! 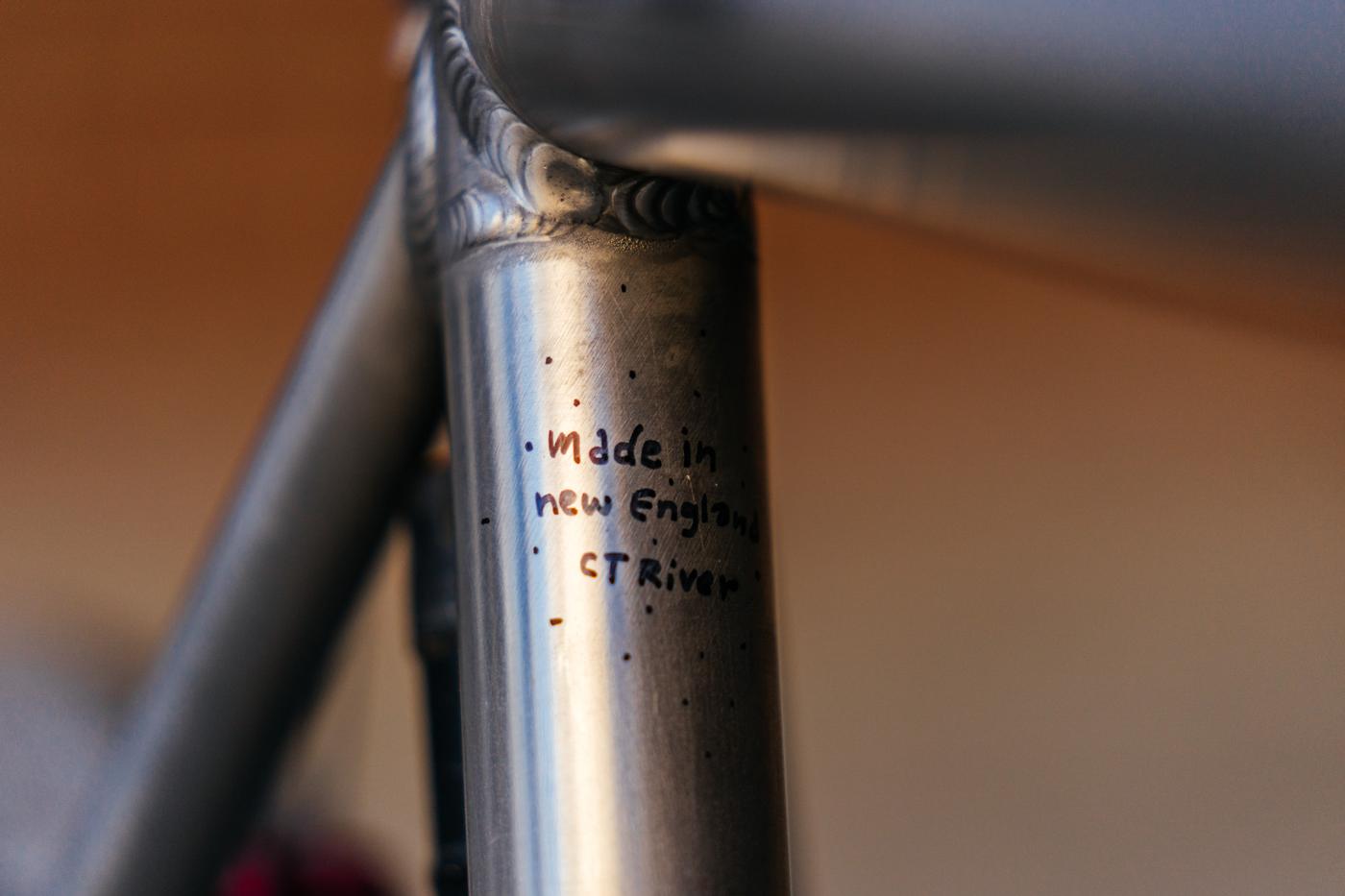 No, Alumalith isn’t a side project from Ronnie’s favorite band, Man-O-War; it’s an amalgamation of a few glacier events that carved out the Connecticut River Valley. This snaking graben spans over 400 miles through the most gosh darn scenic parts of New England. It’s a dropped area between horsts, or normal faults, on either side of the valley, with highlands flanking the Connecticut River.  These faults formed during the tectonic collisions that formed the ancient supercontinent of Pangaea. Once these schisms developed, they eventually provided the pathway for the Connecticut River. It was the glaciated movements that solidified the trench.

As Ronnie puts it:

“This bike is designed to move through the mountains and hills of the resulting “geologically tortured” river valley. This build is 26 lbs, and can be ridden or carried just about anywhere, and connect all the smoother roads in between. Aluminum is a fantastic, lively, and light weight frame material — victim of a big bike industry conspiracy theory to push carbon in the early 2000s. This bike is a culmination of everything I’ve learned in my bike lifetime.”

It’s Ronnie’s love for his locale that inspired the name for this frame, every part of which is made along this river valley. 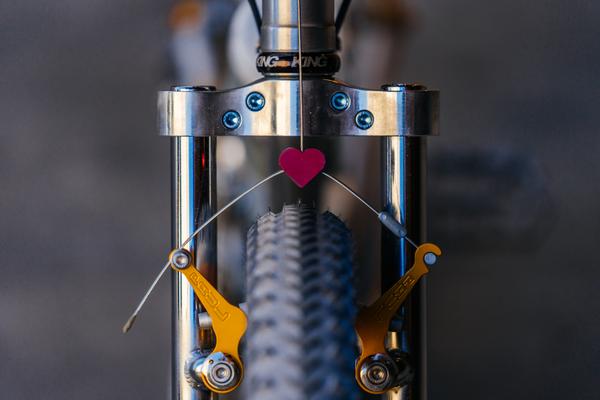 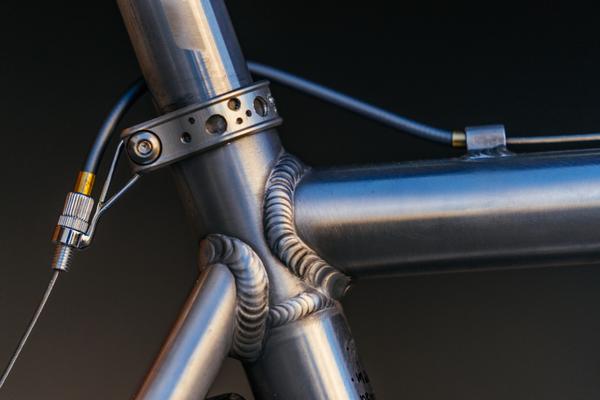 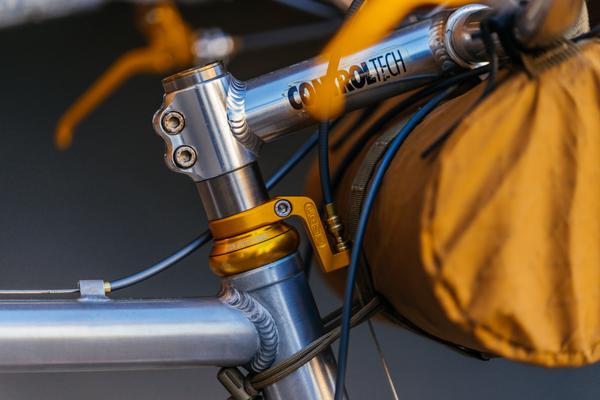 Brass Tacks: The Meat of the Bike

We saw in the Duralcan post that Ronnie loves his 90’s aluminum bikes, and that same Duralcan largely inspired the Alumalith. Once Crust Bikes pinged Frank the Welder for its Dead Sailor frame, Ronnie engaged with the legendary welder to begin work on this 27.5 ATB, which incorporates elements of the geometry found in the Crust Wombat as well. The proof of concept for this bike began with the OG Trek 970 I photographed in 2014.

He wanted a shreddy bike that could do it all, on all-terrain. From basket bike runs, to XC rides, gravel centuries, and even light touring, the Alumalith has lots of potential for those looking for a different modus operandi. Or at least a different look compared to the typical gravel bikes we see rolling around these days.

27.5″ wheels, rim brakes, dropper post routing (30.9mm seat tube), 2.6″ tire clearance, and a custom fork, also made in the area, are the bones of the bike. Ronnie’s neo-retro build includes parts bin heroes mixed in with staples of US-made componentry; Sal‘s lathe-turned brass barrel adjuster, Sam‘s heart-shaped canti straddles, and modern Paul brakes prove remarkably capable when hitched to such a vessel. A tilted Brooks address the Ortho Back Bars‘ riding position, Ultradynamico Mars tires keep the rubber side down while looking the part, and the palette overall harkens back to that fabled Trek 970. 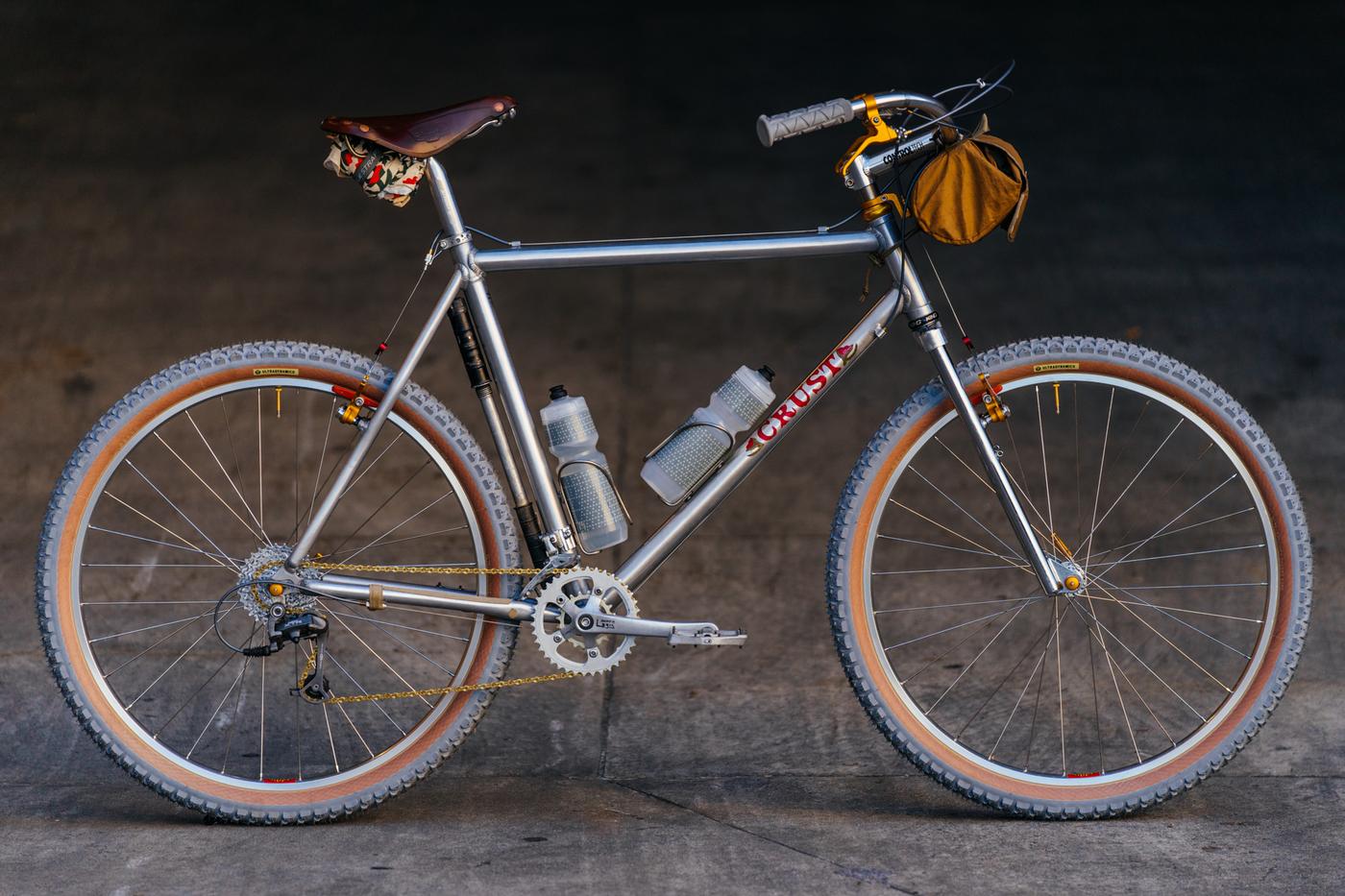 “The geometry is the bike’s skeleton, the build is the skin, and the rider gives it its soul.” – John Watson, third age.

Hold onto yer butts. This ain’t your typical NORBA-era race bike. With a 69º head angle, a 72º seat angle, 445mm chainstays, and a 49.5mm BB drop, the Alumalith straddles the line between modern gravel bikes and future/past ATBs in terms of geometry.

In the context of this geometry, a long stem allows for a more upright riding position, thanks to the handlebar’s backsweep. You could, of course, run a modern Nitto Bullmoose, or a shorty MTB stem and Doom bars, or even an LD stem and drops, depending on your preferred style of riding. 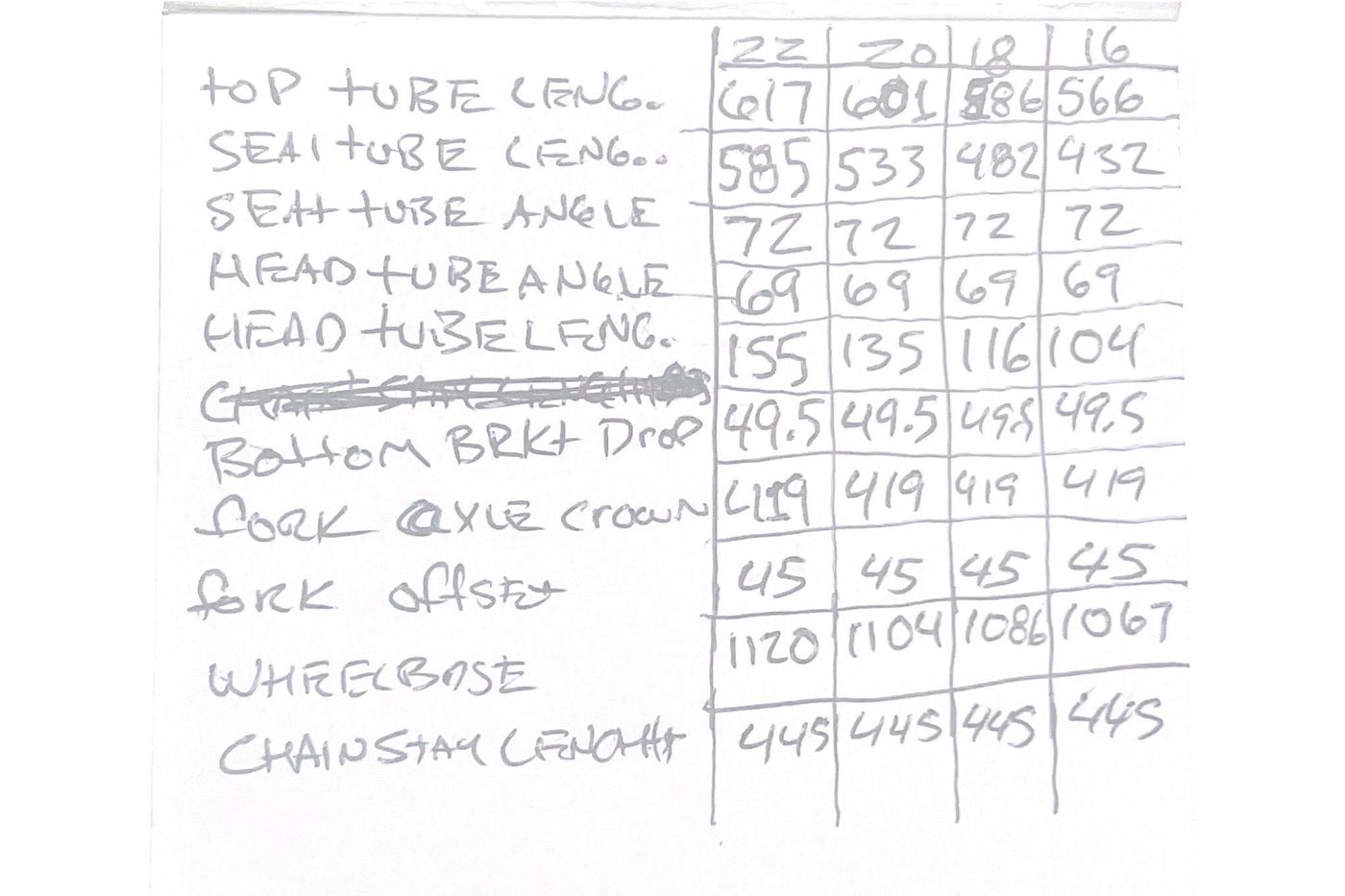 Geometry chart by Frank the Welder. As for the skeleton, the Alumalith is made from drawn 6061 tubing, solution heat treated and age hardened to T-6 condition.

Since these bikes will be sold as a frame/fork, the build kit will be up to you! Of course, Crust will offer a few complete builds, as they do with all their models from time to time, but the beauty is in the eye of the builder… Remember, it’s the rider that gives a bike its soul. 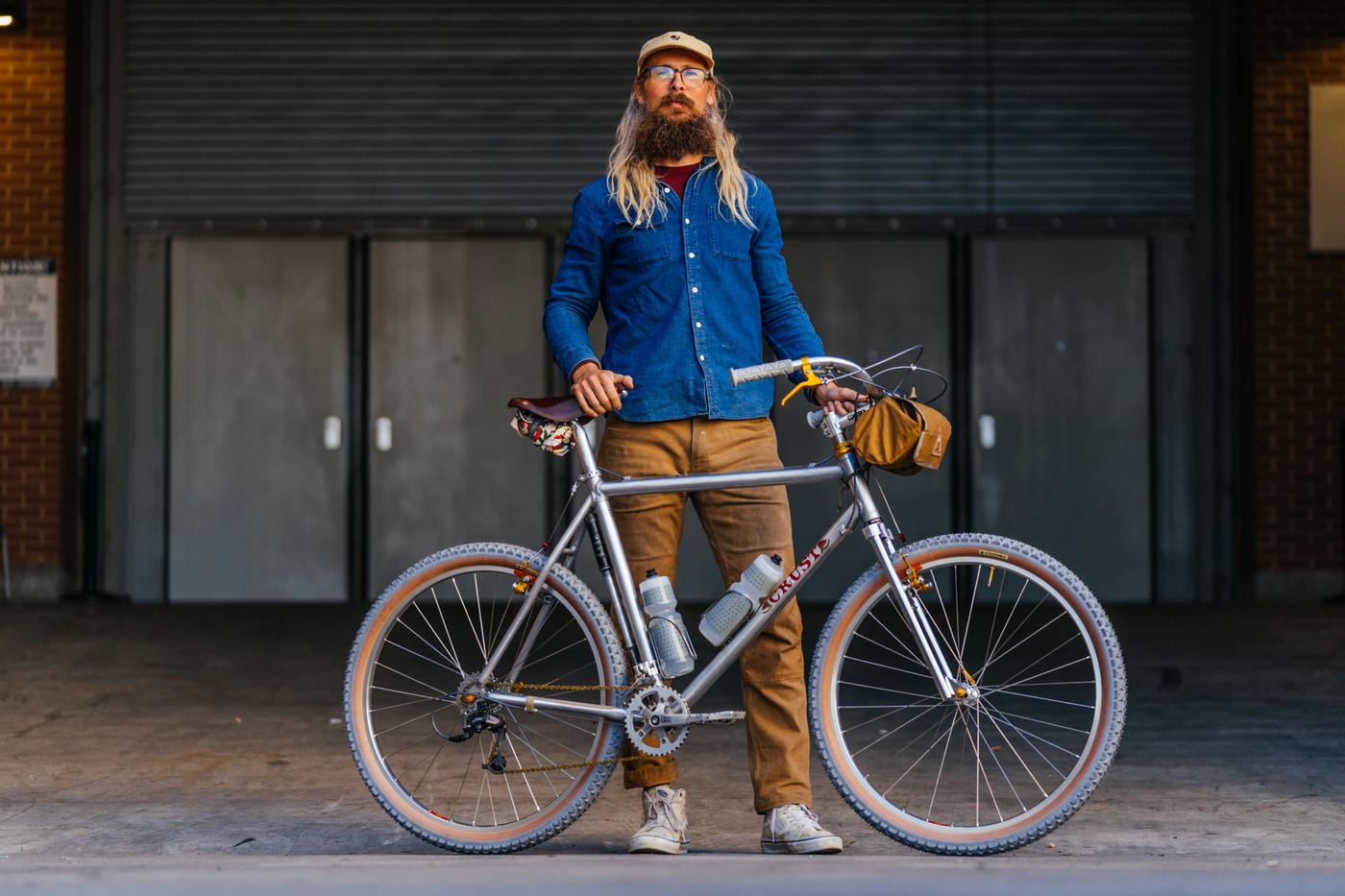 Yes, They Will Be For Sale

RonsBikes.com will sell these frames and fork sets soon. How soon? November 18th the pre-order opens. They could then be ready in December or Spring of next year. The retail will be $2,000 for the frame and fork with a lanolin polish or powdercoat (color TBD), and they will come in four sizes; 16″, 18″, 20″, and 22″. As for the build, you can always pay Ronnie to consult with on your build or scroll through our hundreds of galleries of 26″ wheeled MTB frames for inspo. I’d love to see one built with Suntour XC Pro or a mix-match of 1x drivetrains.

Got questions? Drop ’em in the comments below!