What will soon be seven summers ago, Crust Bikes CEO Matt pedaled his prototype Evasion to the end of Long Island to catch a ferry across the Sound to where the fishing boat I was working on docked each evening. I readied the lines as the boat backed into the harbor.  Looking up, I could see a backlit figure of a cyclist above the docks in the parking lot— late summer setting sun illuminating orange and golds through course, untamed hair.  Chest hair.  We had been expecting each other… 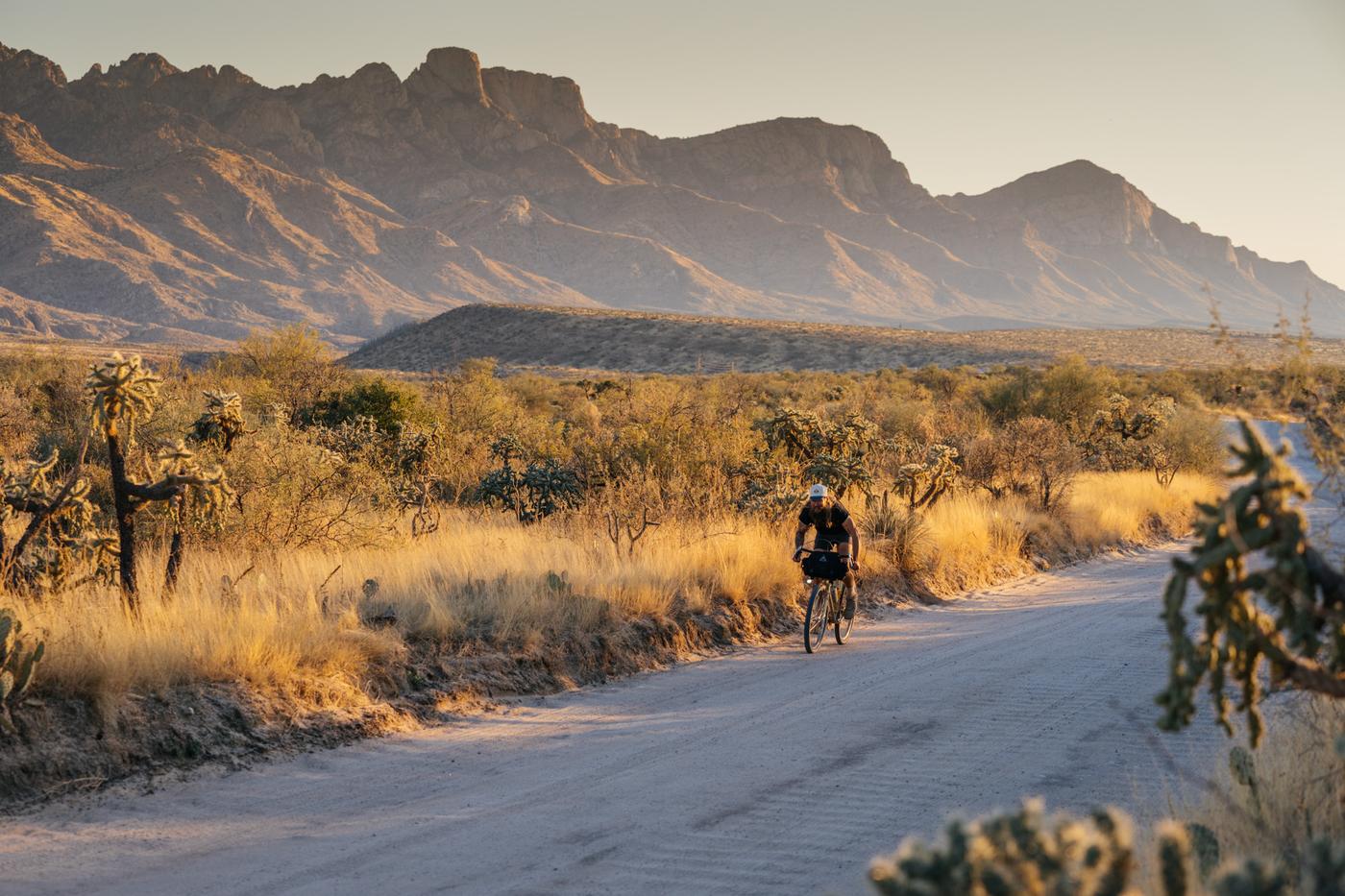 The galley of the boat smelled of rancid bluefish oil under what was left of the ice slurry in the fish box. The rowdy passengers we’d been cutting fish for smelled no better.  I stepped off the 60-year-old hag of a boat that was to be my inheritance both physically and occupationally, a business my father started a few years before my parents had me.  He stuck with it and it became his identity. I admire him for that — I had been working for him for sixteen seasons at that point; summers on for 80-hours per week, and winters completely free.  It’s a life I’d seen modeled for me growing up, and a life I’d become accustomed to after post-college career aspirations faded.  I definitely didn’t want that life though; I liked bikes and there was this new app that I was nuking my iPod Touch photos through, and it seemed promising. 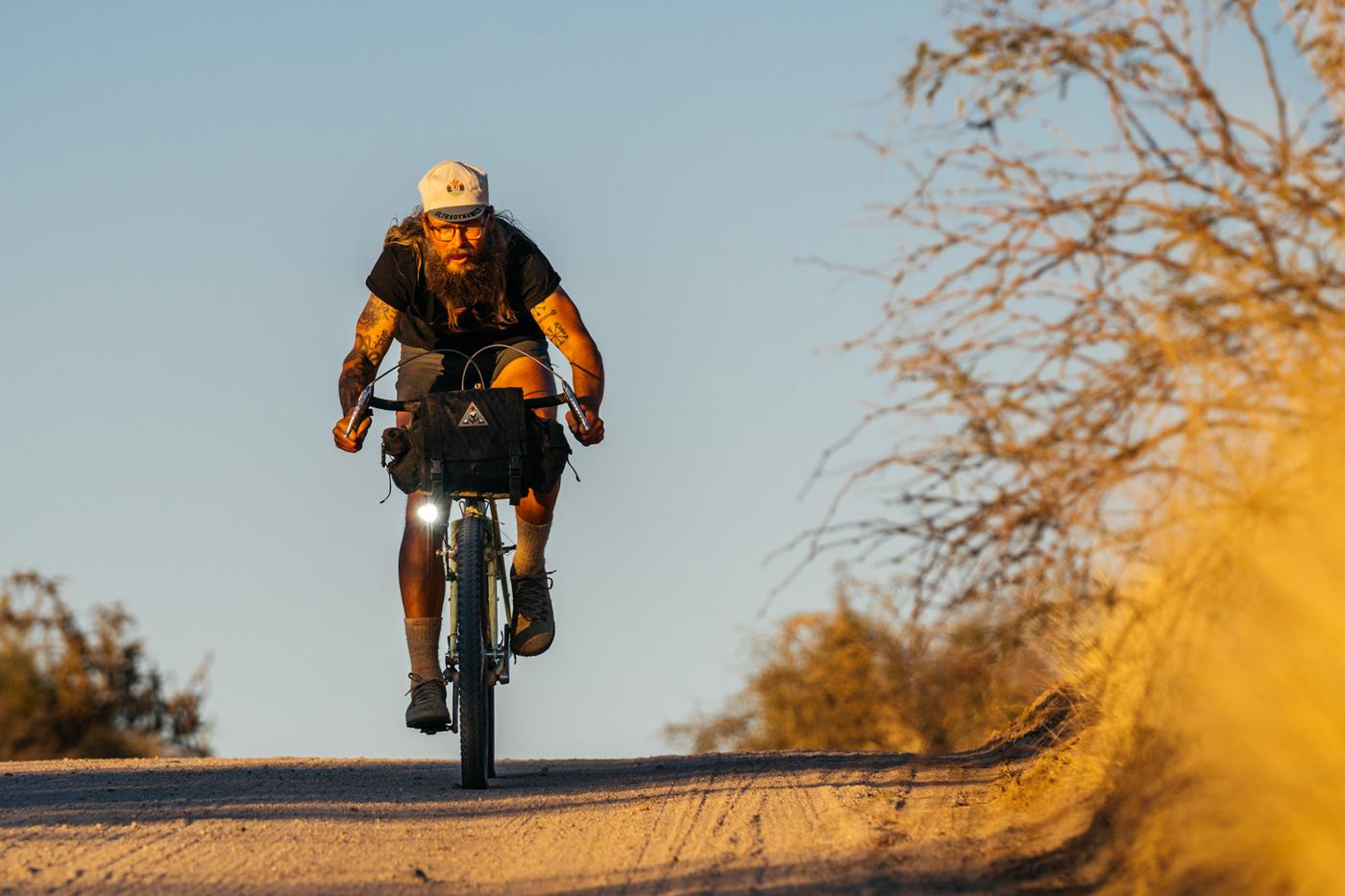 I walked up the ramp to the parking lot level with a trash bag full of bud light cans and headed towards the warm dumpster where this bike-travel-chiseled Aussie posed with his chubby touring bike – and then signature low rider panniers on 26×3” tires – waiting for me, chest hair a’ glistening.  It was the internet apparition himself —- Instagram 1.0 surf/bike traveler influencer @afewsketchymoments, soon to be Crust Matt. Matt had been pedaling around the west on this bike visiting all the bike IG 1.0-ers (the admin of this site included) advertising that he was starting a bike company.  I was intrigued, and he wanted to talk to me about some things, but I’d not expected much.  Bike companies were these big things that people like Mike Sinyard start — not this sunburnt punk next to the hot marina dumpster in my hometown. 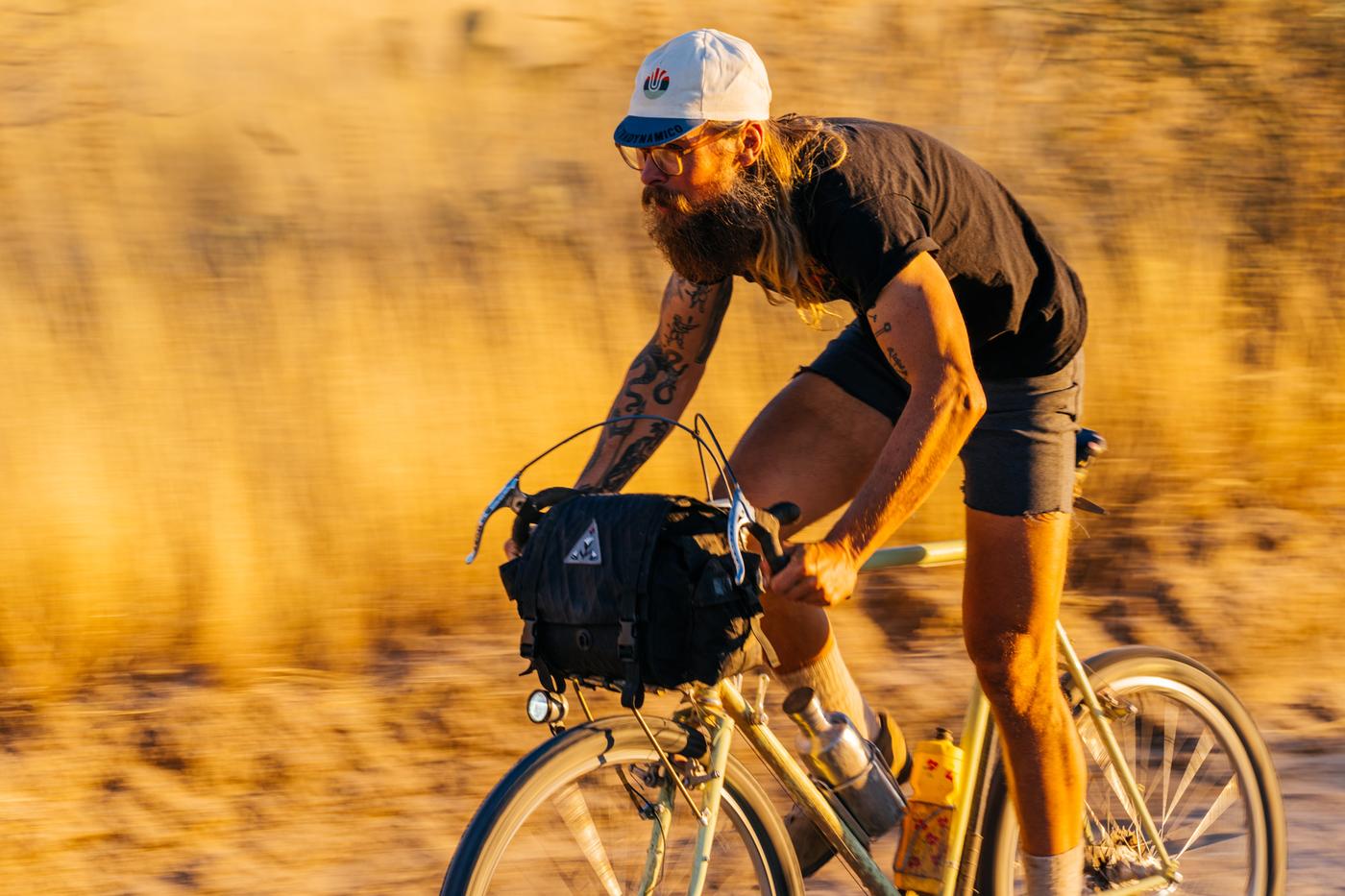 Small talk, then he helped me swab the ol’ deck and we pedaled back to the house Arya and I rented a few towns down RT. 1.  A warm summer night riding bikes talking bikes the whole way.

Matt slung his hammock in our backyard and stayed for a few days.  He wanted to run Crust like a BMX brand where each “pro” has their own “pro model” that they design.  I wanted something strange, including the stranger handlebars to go with it.  Matt, who had made a living as a plumber up until now, told me he could put my strangest dreams into production… I said ohhhkkkaaayy — and we sat there at low tide next to the docks chatting about trashy vegan food and 90s metalcore. Things moved much quicker back then than they do now and we had the first 62cm unpainted prototype sent over to me just four months later. A fully lugged Reynolds 853 1” threaded 26×2.3” optimized randonneur bike with disc brakes.  I built it up as soon as I had a day off and took it out for a ride through the woods.  The bike really moved on the roads but could handle the randier transitions and connector trails like a vintage mountain bike opening up a whole new level of terrain in my back yard.  It looked classic and performed modern – mixed terrain mastery,  just what I was looking for. I esthetically pedaled home and scribbled down my raw emotions: 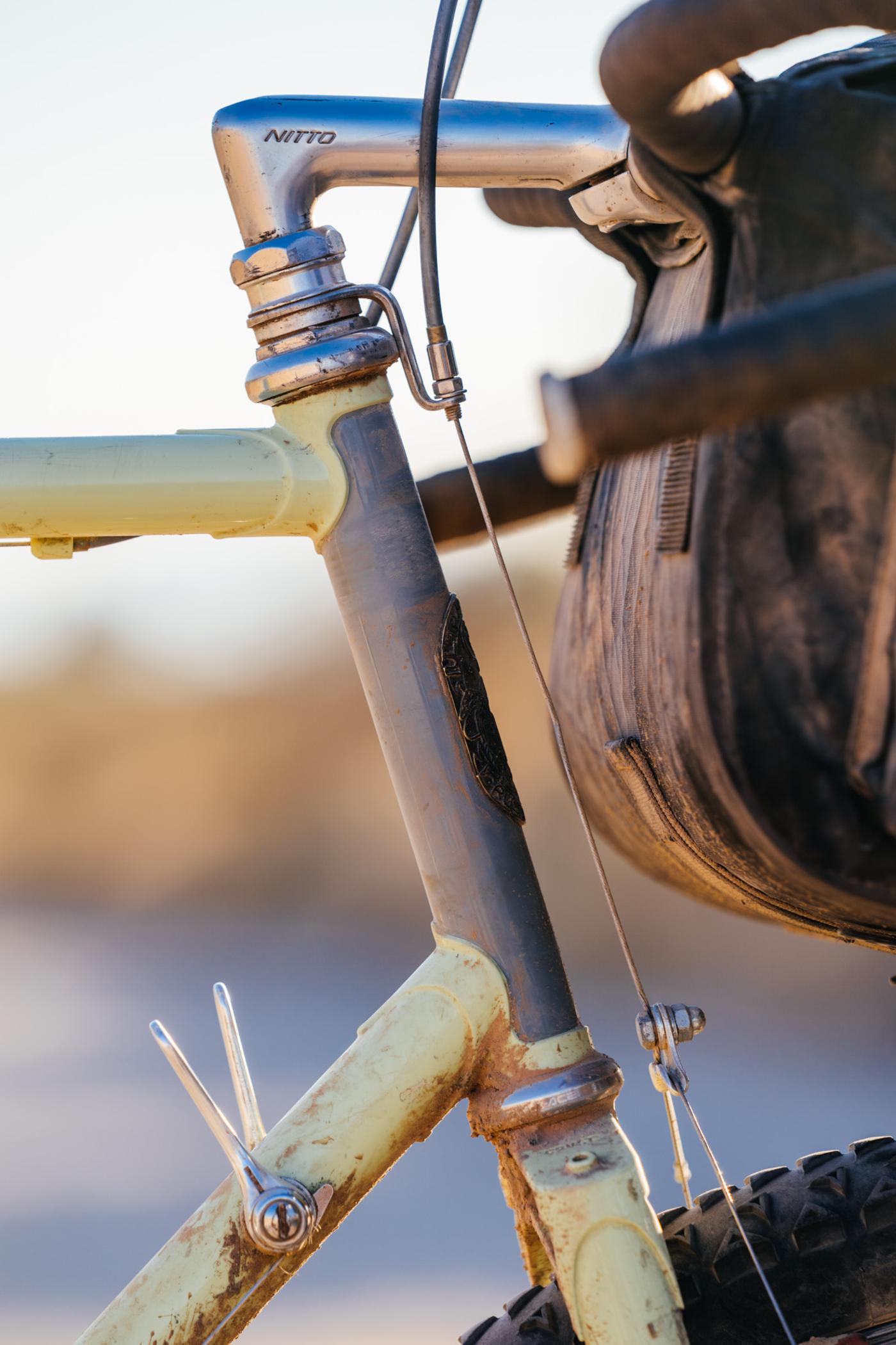 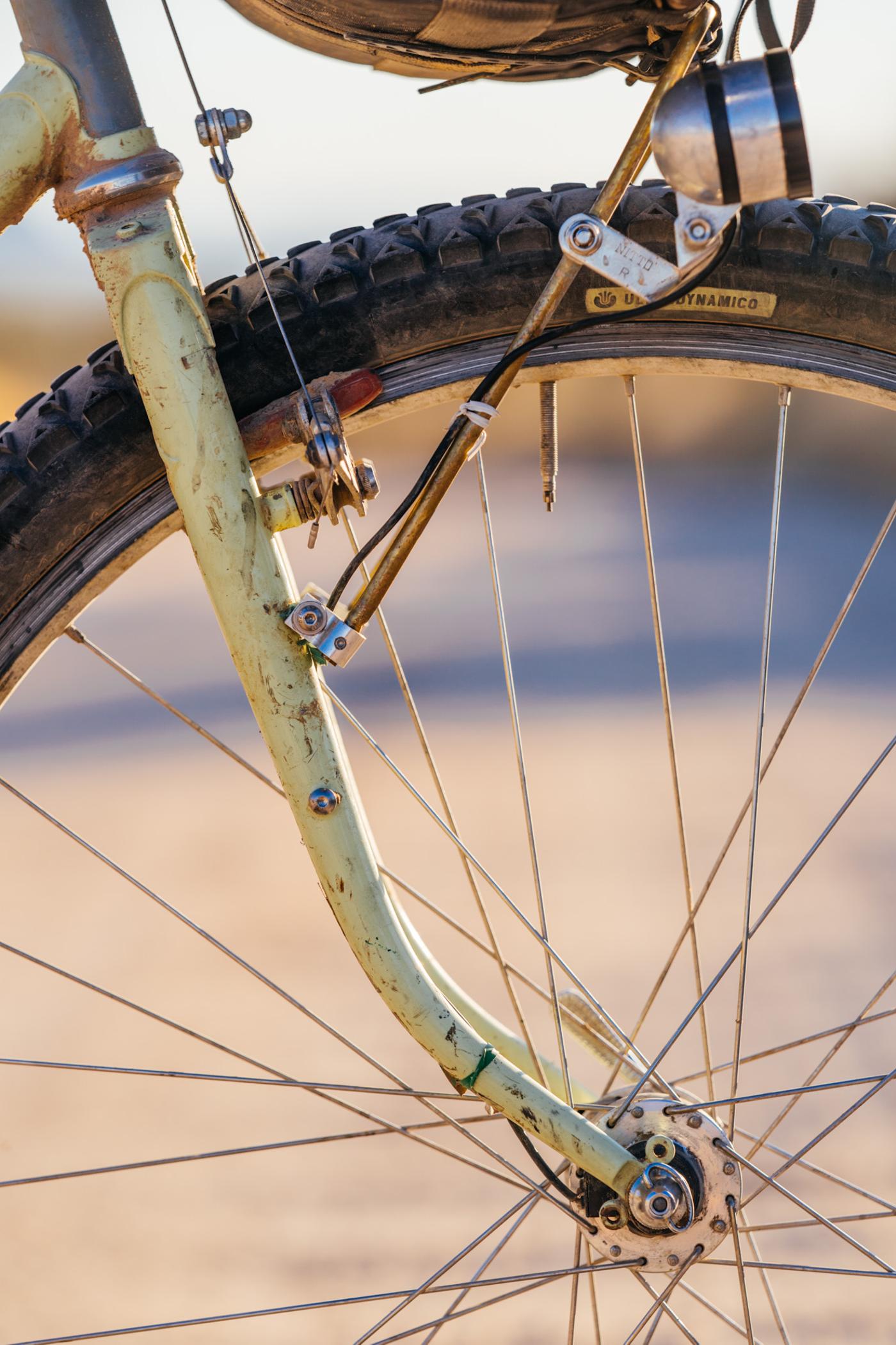 “The ROMANCEÜR is a swashbuckling tender heart of a fantasy warrior, who not only seduces its rider, but acts as a psychedelic aphrodisiac on the psyche. Together you become thee Romanceür, a sacred, lustful partnership rendering all riding surfaces swooned out and speechless, pining for an intimate evening including a tray of rosé Jell-O shots.” 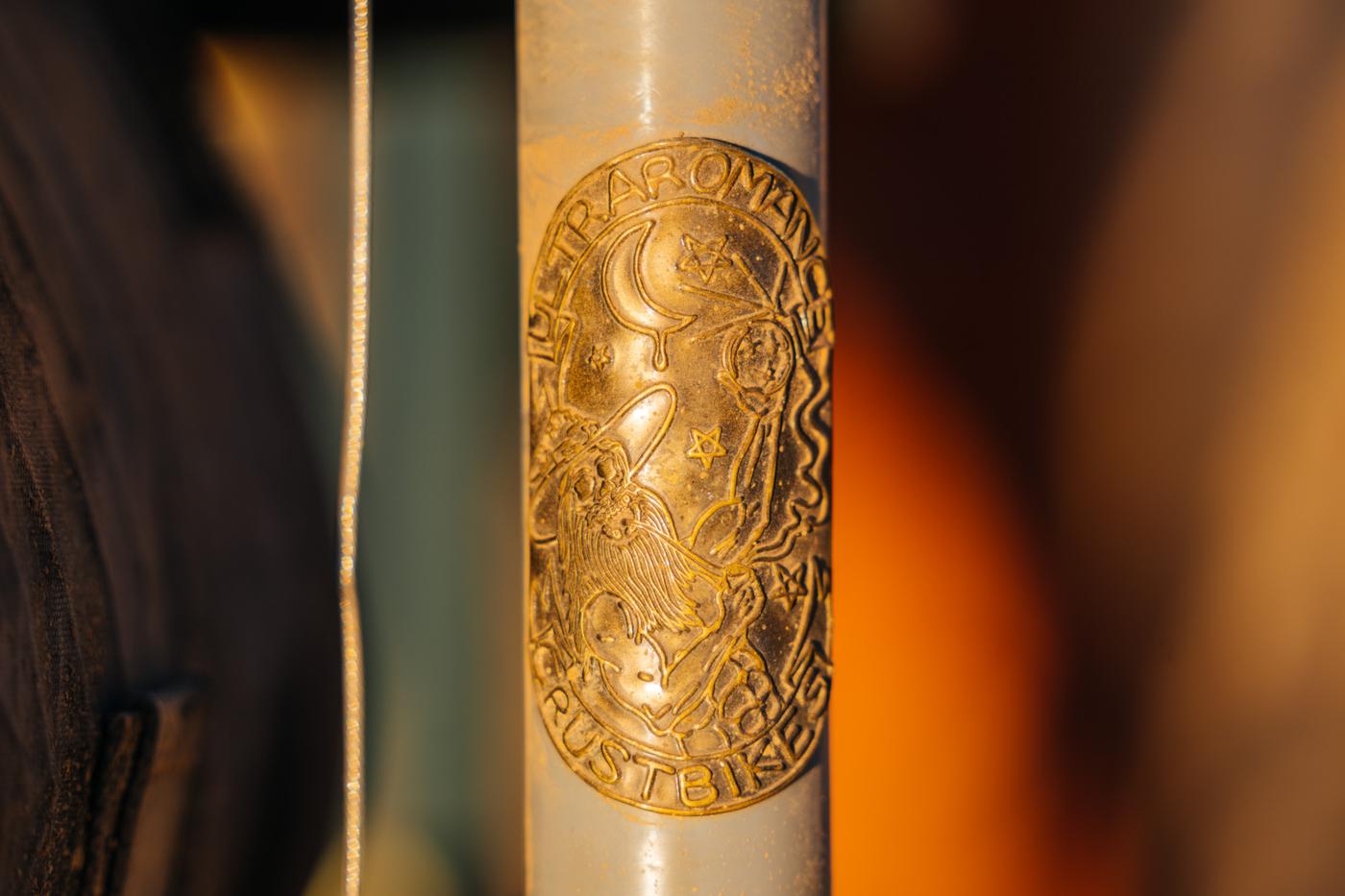 The Romanceür was released in November the following year in silver with gold writing that you unintentionally can barely see.  John shot some photos of that bike for the site back then. You will notice this bike also has the strange 66.6 cm Leather bar I mentioned in an earlier paragraph.  It was far from the drawing we sent the factory, but I thought they felt pretty good anyway, so to production they went.  I think we made 50 or so.  We were just so happy to have finally found a factory that agreed to make wide drops bars.  Four iterations later we finally got what we had originally intended, and 3.2 of iterations have been fun bars in their own ways, in my opinion. 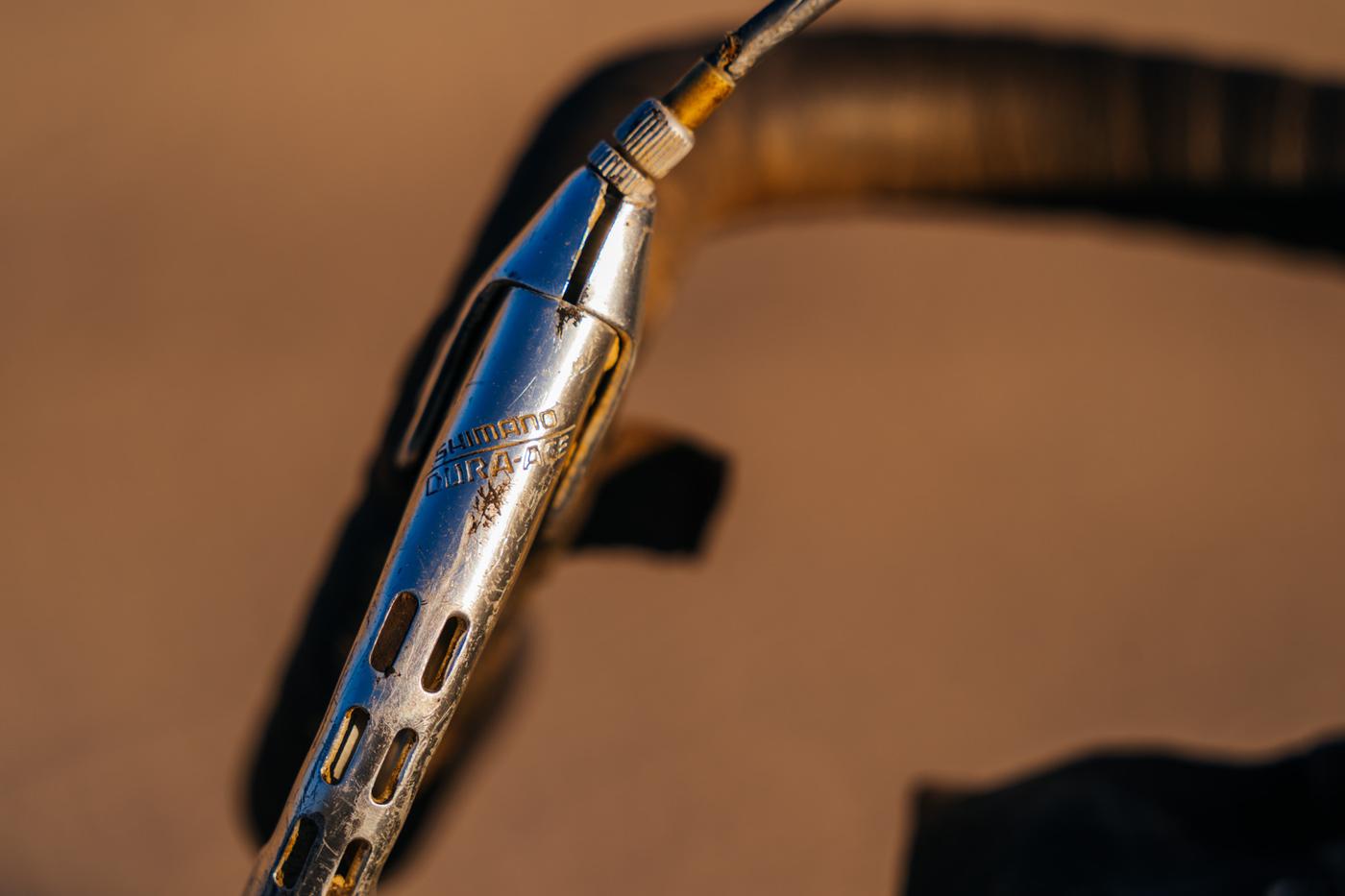 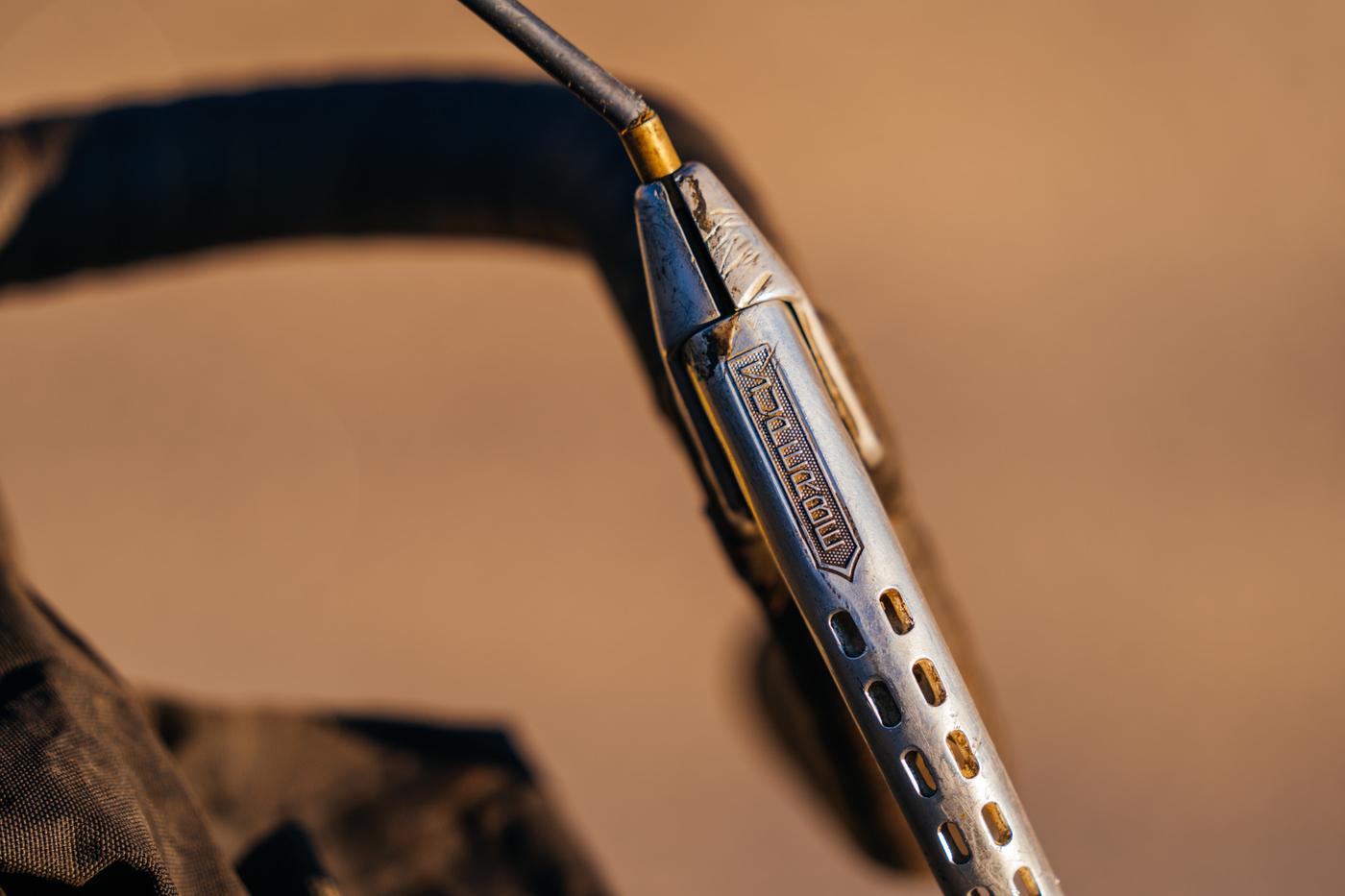 Matt is also the one who pushed me to get into the bike bag business that now floats our financial boat. He’s been a fantastic shoulder to cry on and inspiration for the tire business my pal Patrick and I started a few years back. Most recently he’s been indulging my costly divorce with disc brakes. 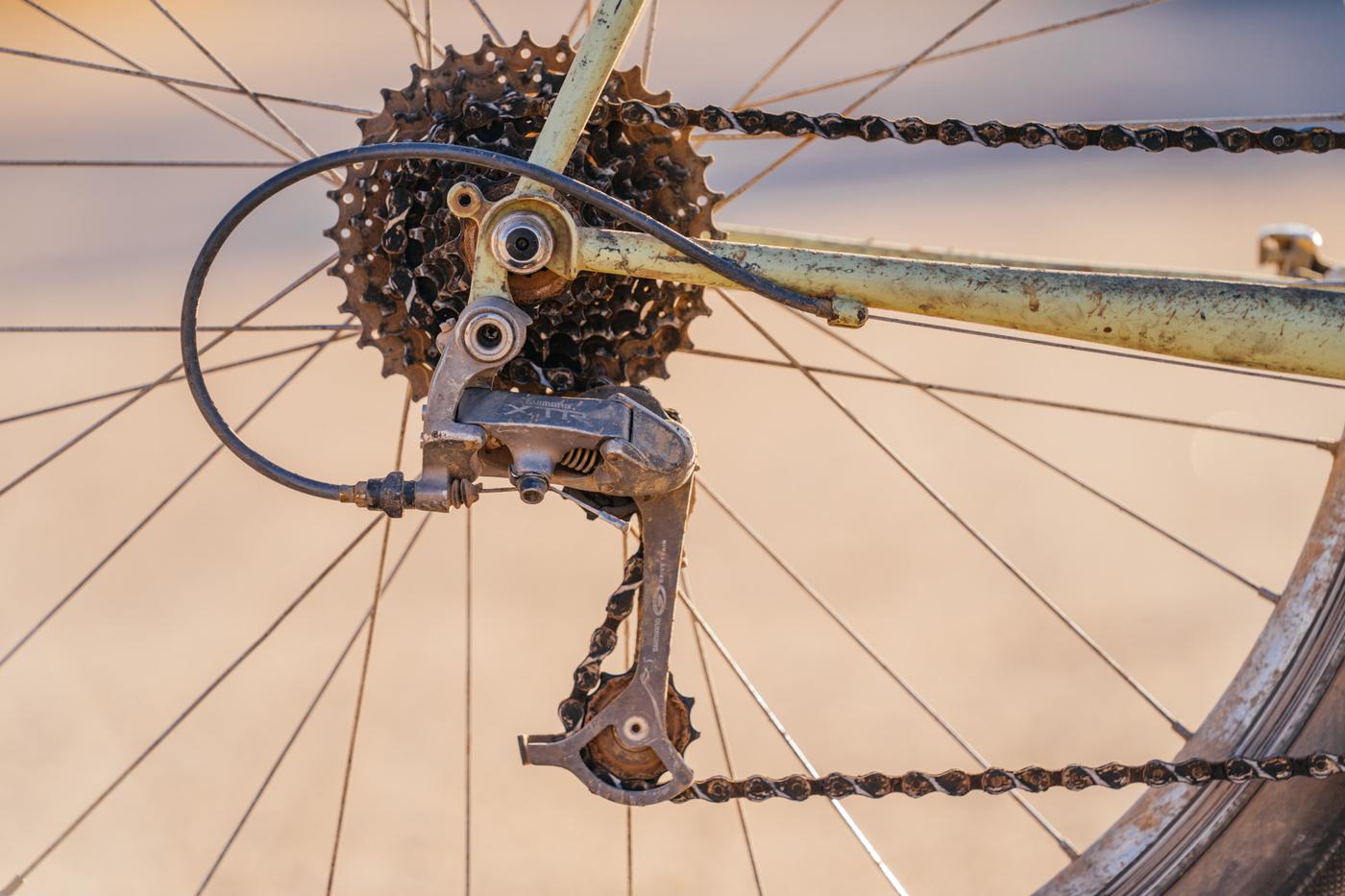 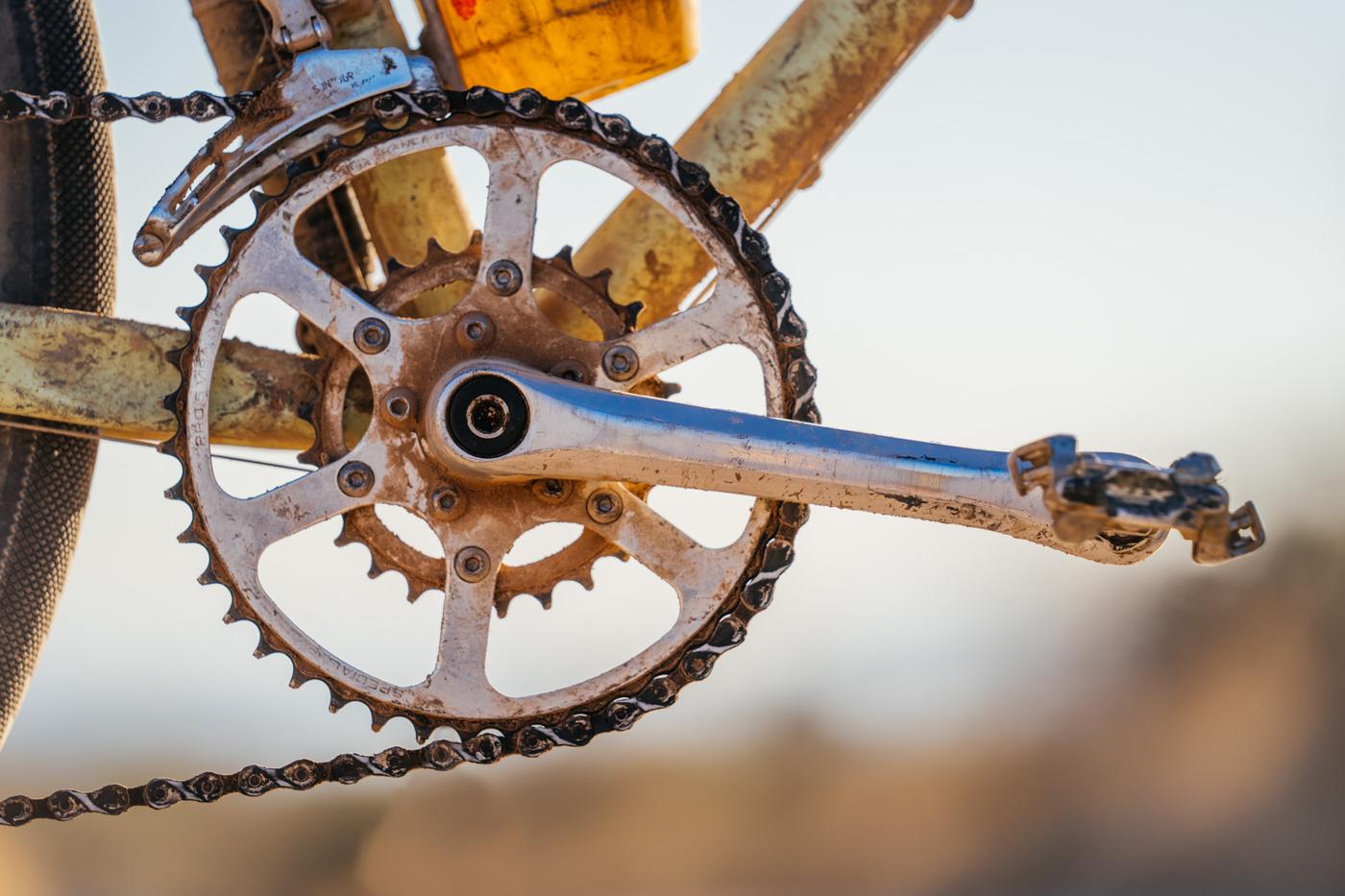 For unidentifiable reasons, I have nearly eradicated them from my bicycle collection. When set up properly, the only dissuading limitation to rim brakes I’ve found is when riding through water in the winter and having your braking surface freeze going downhill.  The only thing that can save you in this scenario is the disc brakes you don’t have. Aside from that, I enjoy the engaging modulation, predictable braking, more flexible fork, and aesthetic appeal.  And so subversive! Without further adieu, I present to you something I asked Matt for, and Matt made happen—- my year and a half old Cantilever’d Romanceür in Ultradynamico lichen colorway.  Although this frameset has yielded very little margin for both Matt and I (a different story), what’s hung on it (bag) and what it’s sitting on (tires), and what the bag is hanging on (handlebars) are designs that come together to earn a sustainable living for my partner and me. I’ve since come to appreciate the boat more since that day I first met Matt next to the dumpster, although I’d much prefer the view and mostly smell from where I type today.