The first time I caught sight of Ronnie at this past weekend’s Nutmeg Nor’easter, he was handing out welcome gifts as a crowd of riders waited for the ferry’s return on the west banks of the Connecticut River. “Get your poop bag, everyone gets a poop bag,” he exclaimed—like the bygone vendors who’d hawk peanuts at old baseball games—doling out little green compostable doggie bags between hugs and hearty salutations. I later learned 250+ riders had shown for the two-day rootsy New England bikecamping event; a far cry more than the group of five dozen that made up the inaugural Nor’easter six years hence. For me, this would be my first time in Nutmeg country! 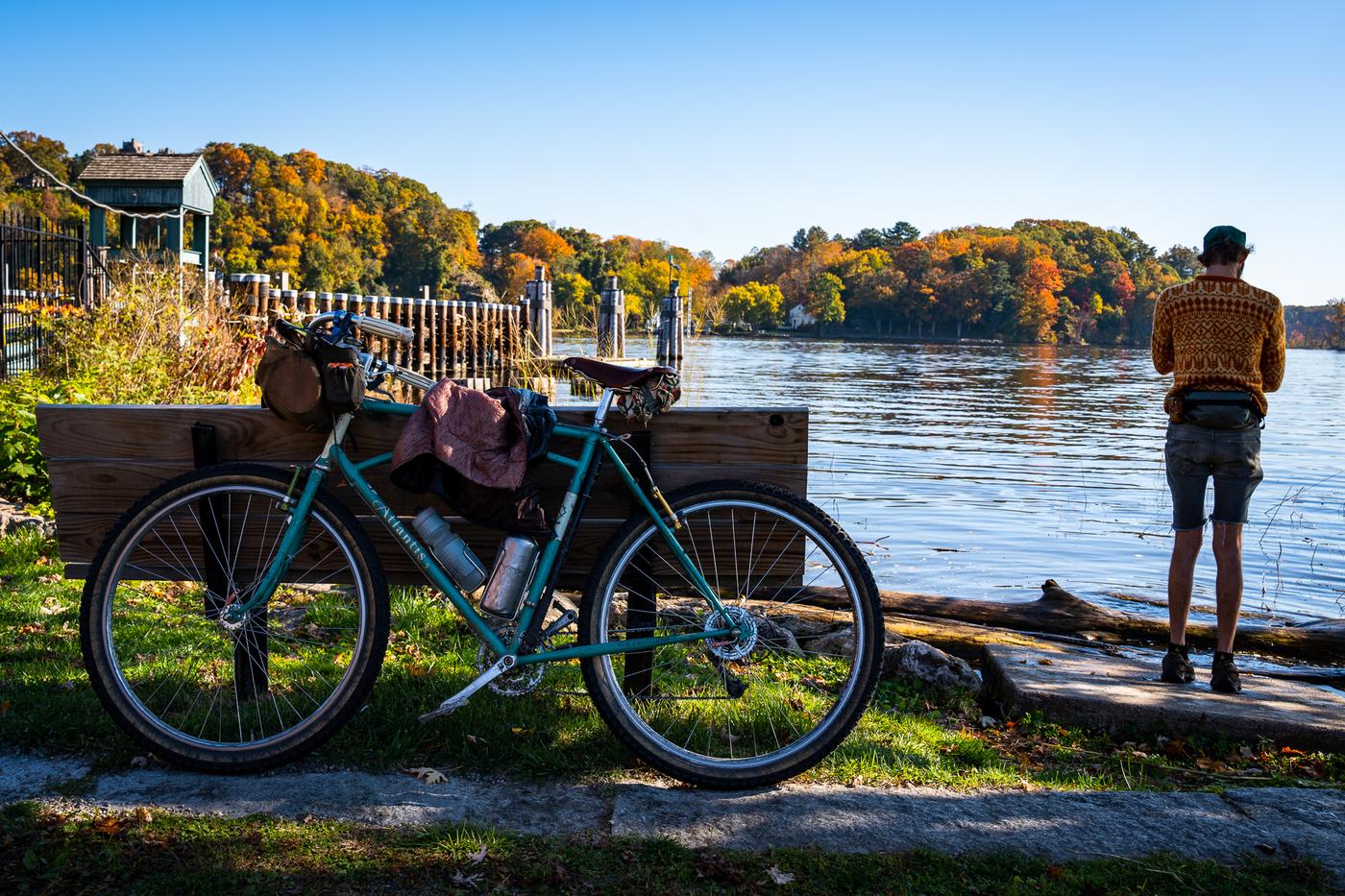 “I’ll take two,” I said as he padded over, socked-and-Birkenstocked. Upon turning around and realizing who the speaker was, his face broke into a smile and we exchanged hugs, while laughing at the absurd drive my partner, Tony (who’d just sprinted back to the car in downtown Chester to fetch something forgotten), and I had logged to get to the start. With a Boulder, CO to western NC trip already on the books for mid-October, we’d figured that “tacking on” the Nor’easter made perfect sense while we were in the distant Appalchia neighborhood. The 13 hour drive up the coast over the past 30-odd hours had made us question our sanity but we’d arrived in the quintessentially quaint town of Chester that morning, still with an hour to spare to throw everything on our bikes. Rolling down to the historic ferry crossing, I was astounded by how many eager cyclo-tourists had showed. 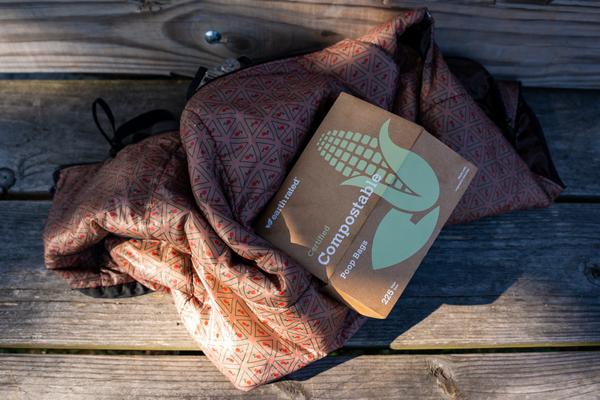 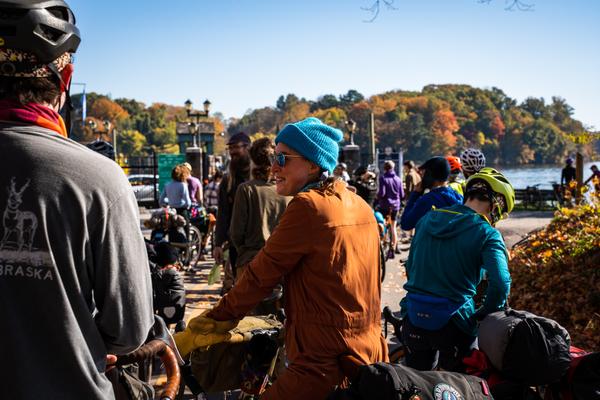 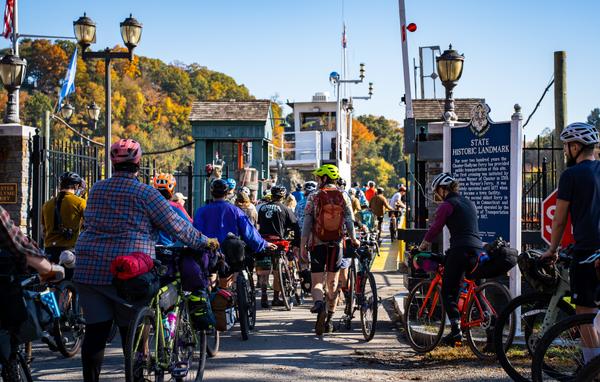 “It’s like the Sturgis of alt cycling,” joked Tony, as we found ourselves alone pedaling the quiet roads later in the day. His observation was especially funny given the town approval hoops that Ronnie and Arya had faced in the mere weeks leading up to the event. Evidently, a local busybody had misunderstood the event’s conceit entirely, and had spread word that the Nor’easter was, indeed, a motorcycle rally— au contraire! It took quite a bit of reassuring and cajoling from Ronnie et al to assuage these misinformed fears and assure the gentle townspeople that the only leather likely to be seen would be in the form of a parade of well-seasoned Brooks England saddles. We’d rolled out with the group to start—happily catching up with Ronnie and Adam Sklar—en route to the first, and delightfully unexpected, stop of the day: J.P. Weigle’s workshop, Rando Alley. Bikes were strewn everywhere as we rode up the drive—everything from Stumpjumpers to Salsas to Sklars. We were too late for donuts and cider, and instead were treated to stories from Peter—a generous and at-ease host—about everything from the first Pearl Pass klunker ride, to inventive proto-headlamp lighting solutions, and more. 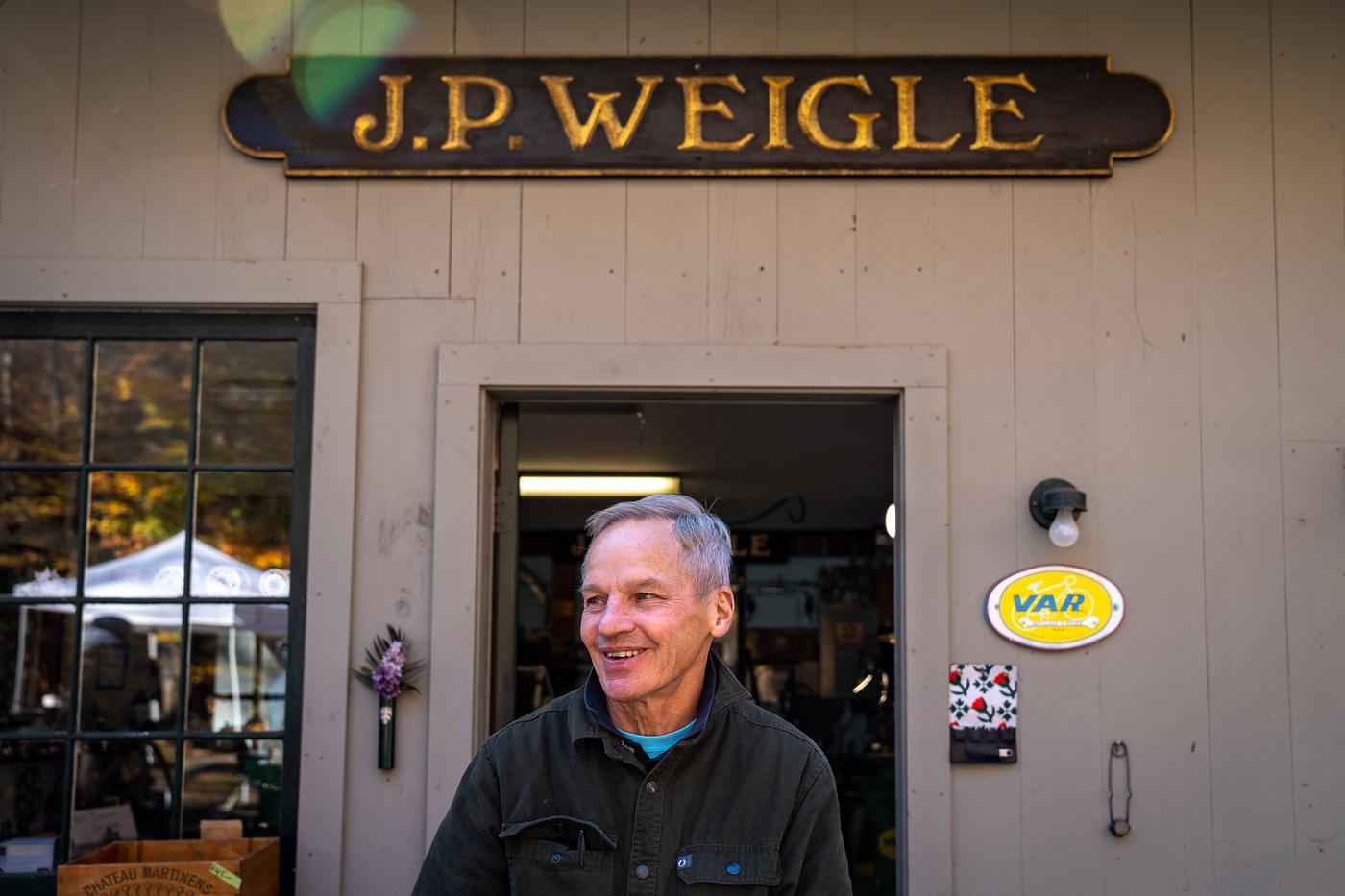 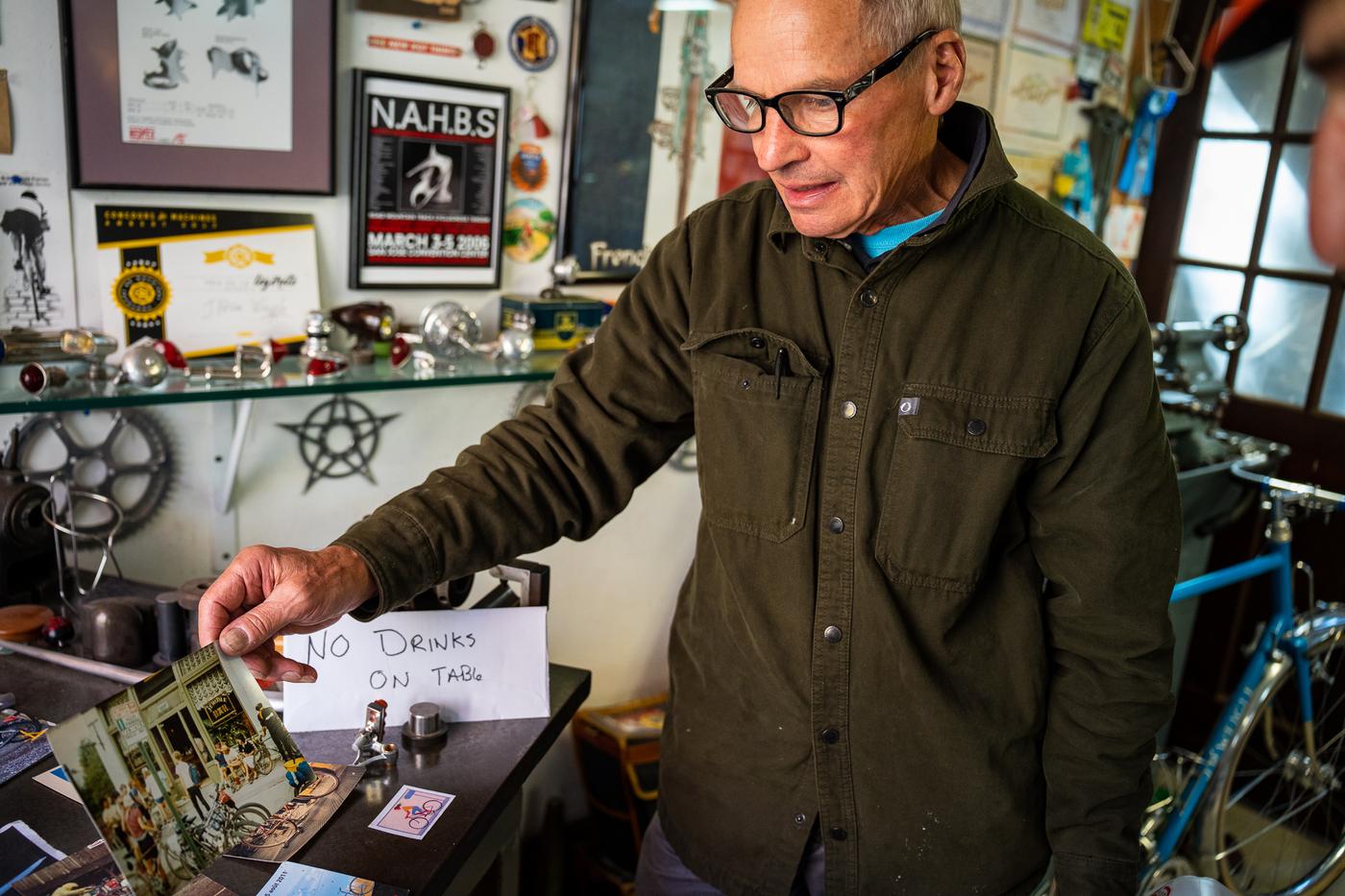 Our stop at Weigle’s easily rolled over an hour and we emerged from the lore-laden studio to find that most everyone had cruised on. Oh well—after all the recent car time, it felt nice to finally not be rushing.

And take our time we did—the weather was decidedly perfect all day as our route took us past roads with names like “Darling,” and “Beaver Brook,” and “Grassy Hill.”  At one point, the New Englandness of it all was feeling overwhelming and Tony called back “this is painfully quaint!” When we rounded the next bend, I almost fell off the bike. In the roadside cemetery was a single Revolutionary war reenactor (still over a week out from Halloween, mind you) and, on the porch of the next house, a woman sat carving a pumpkin in reflective solitude. 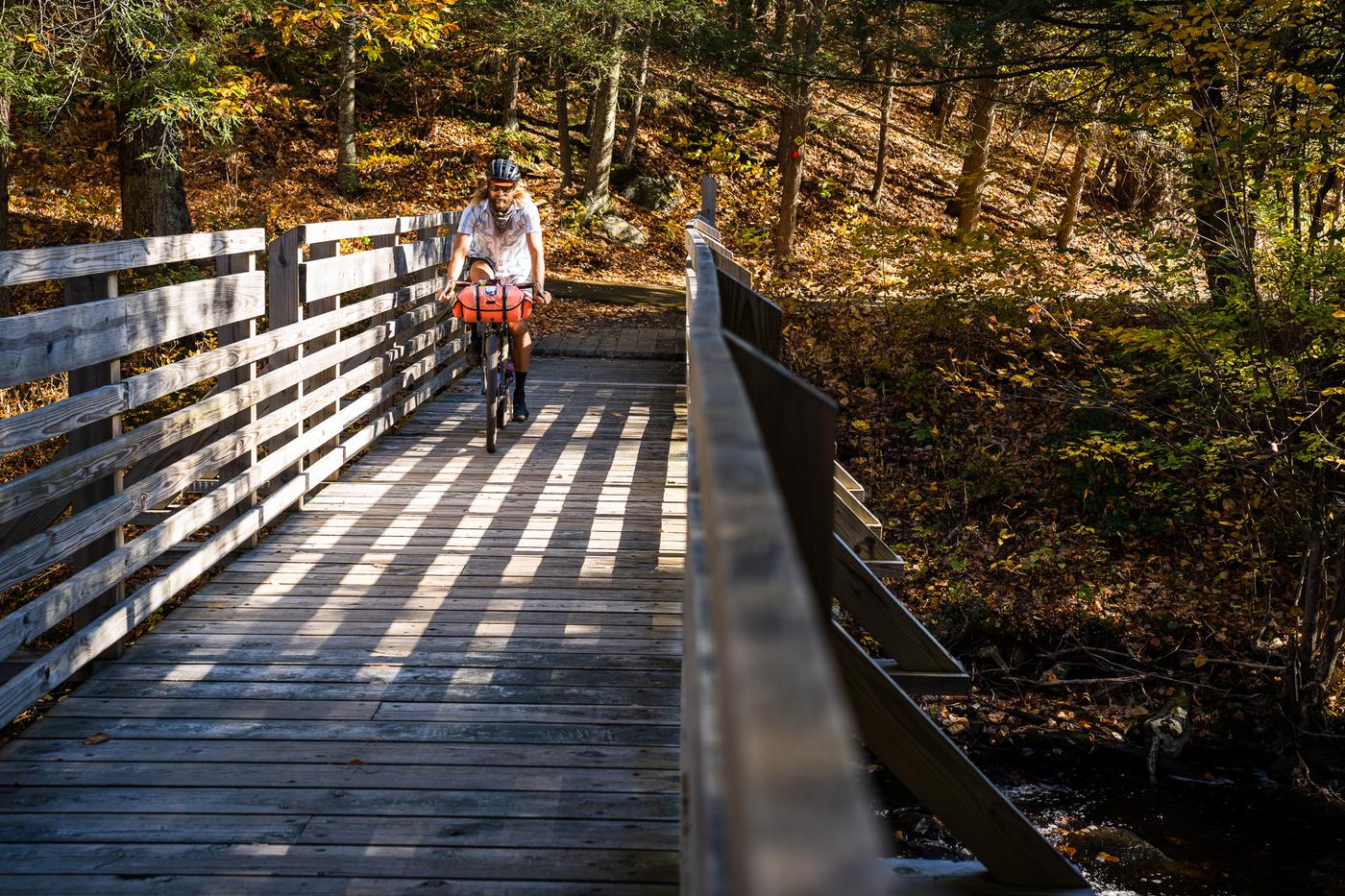 In total, the day’s ride (we opted for the medium distance loop) was a 40 mile autumnal meander complete with stretches of serpentine tarmac, skinny ribbons of leaf-framed forest cuts, a remarkable number of cemetery sightings, and—the highlight—final miles on railroad-graded gravel alongside the Salmon River. Admittedly, although I’m from the east coast, I’ve become accustomed to the wide sight lines afforded by the Mountain West since moving to Colorado and, as a result, heavily rely on high prominence landmarks (i.e. mountains) that are nearly always visible to orient by. In these Connecticut woods—stuck in the trees—I had absolutely no sense of where we were going or from which direction we’d come but it was a leafy labyrinth I was happy to be lost in for the weekend. 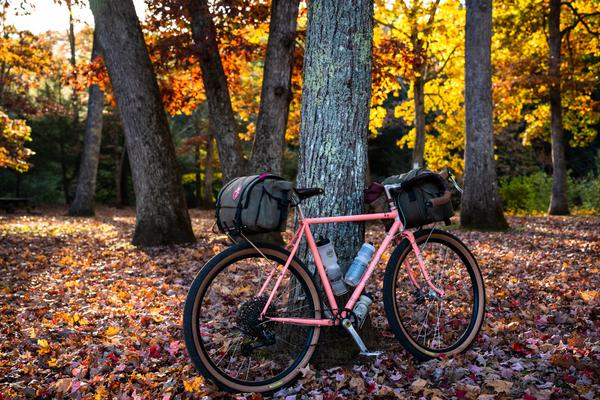 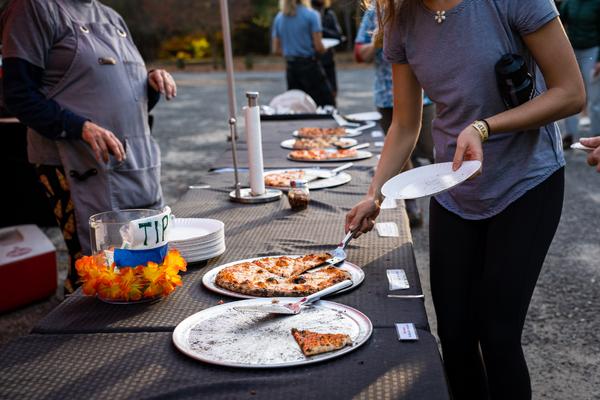 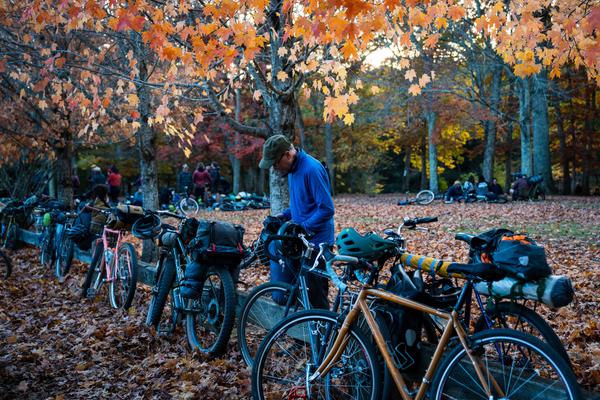 Cool air settled over the field in the park, our gathering spot, as the fading light danced off the still-hanging leaves, like so much colored glass. Arya handed out “V.I.P” wristbands (“everyone gets one!”) for the on-site pizza offerings and I was reminded that all food tastes better outside, especially if it was cooked there too. I met more folks than I could possibly remember and heard a few stories I’ll never forget, like Todd from NYC and his New Year’s Eve Brooklyn blizzard-bikecamping escapades (“we shouldn’t have brought the dog,”) and Ronnie’s mom, M.J., telling us of the four days she shared with her son on the CDT for her 65th birthday (“he built me a Romanceur!”), the memory shining bright in her blue eyes. 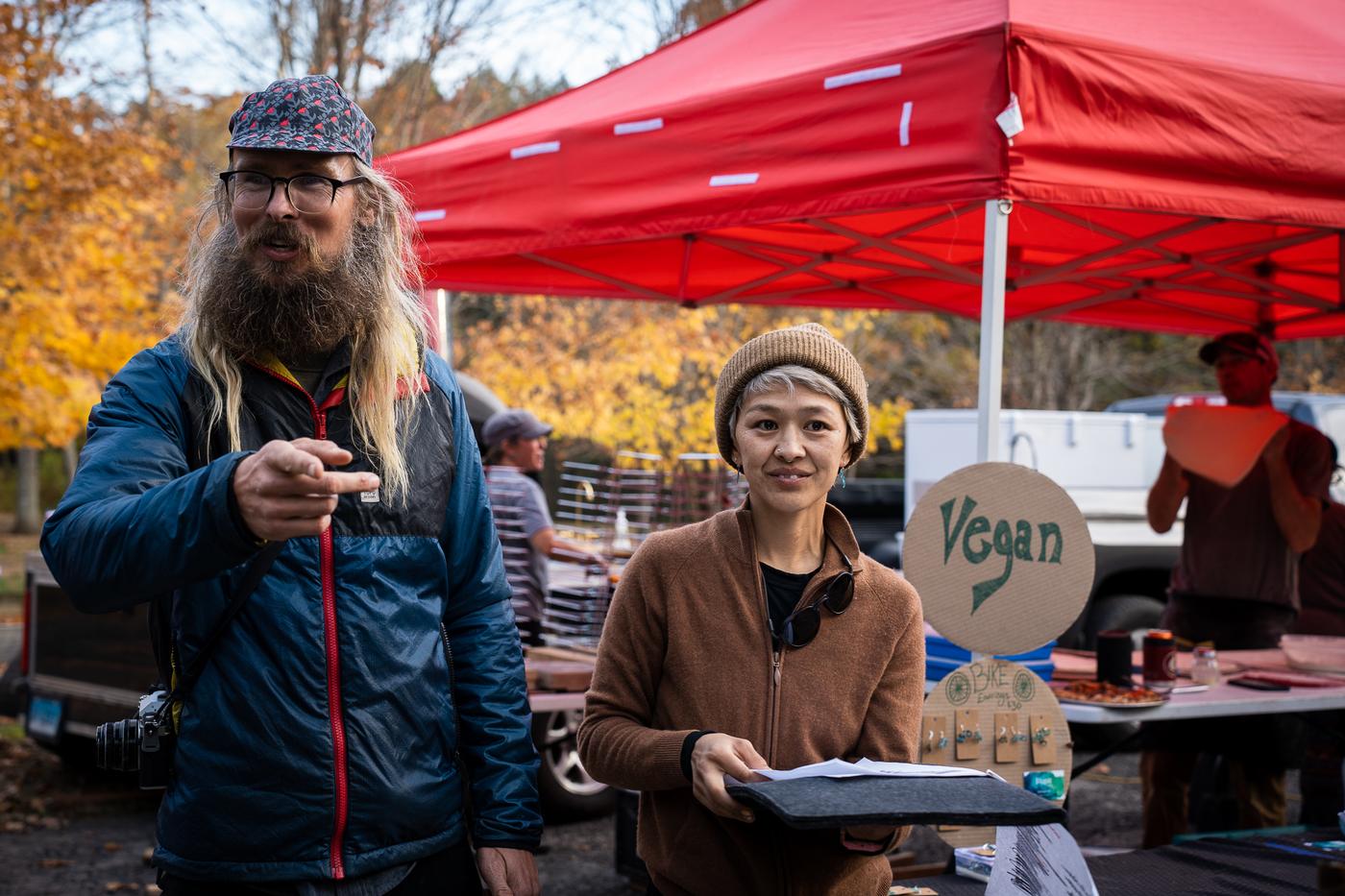 Once we were too embarrassed to sample anymore slices, we made the short pedal into the woods to properly settle into the night. After tents were pitched and bikes abandoned, a few of us gathered around an improbable fire, started on leaves and fed with the least soggy deadfall, right on the banks of the Salmon River. 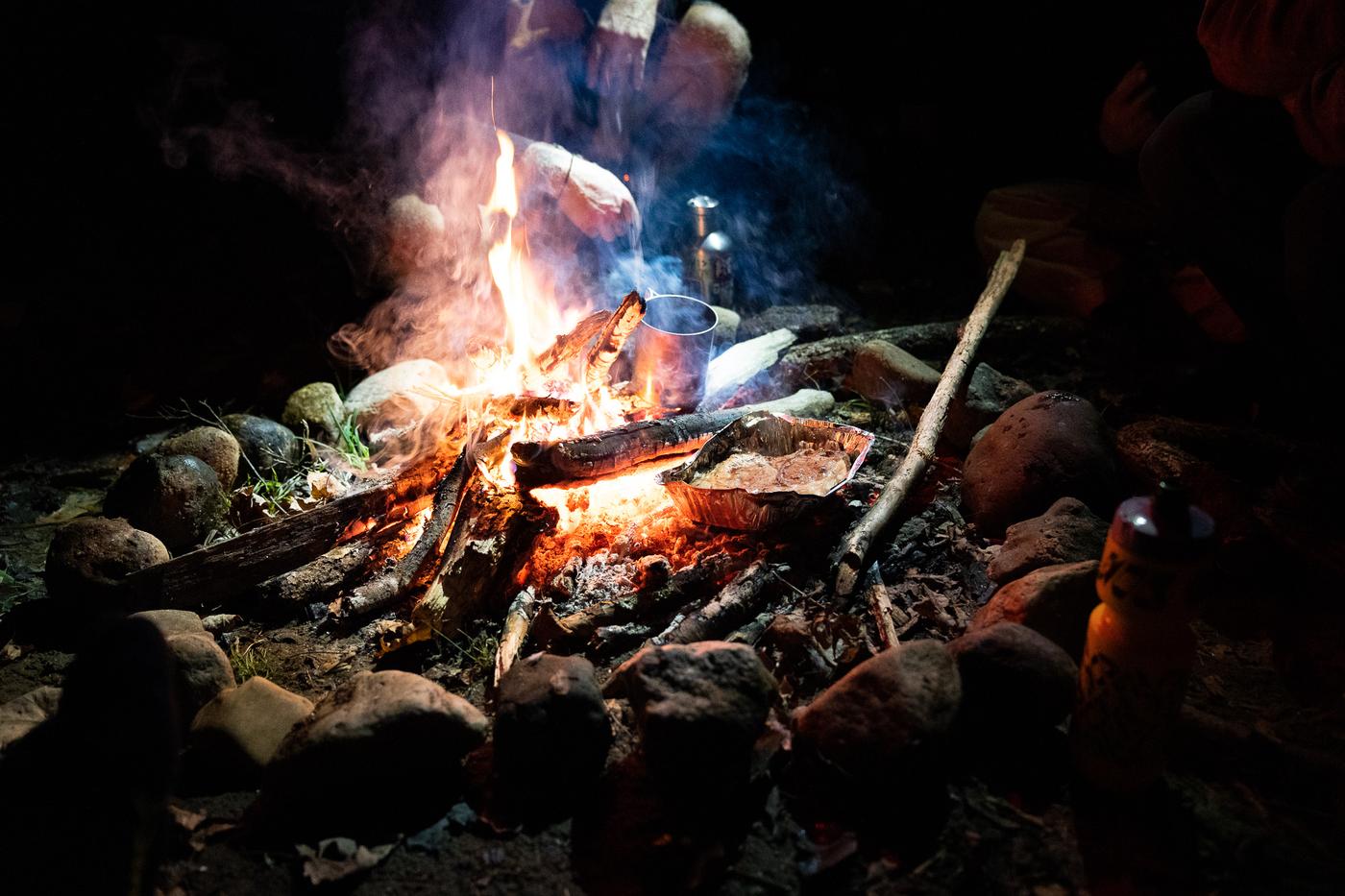 Nick, who’d scored a then-frozen pork chop at a local farm, had the most personal investment in seeing our blaze thrive and before long he had his cut cooking over a small bed of coals. As the dark deepened and our logs burned, we swapped stories from the day—mechanicals, bike set-ups, etc—and, despite all prior ribbing, we all cheered in solidarity when Nick’s chop was finished to a seemingly satisfactory medium well (“You got a vegan helping you cook a pork chop, but IDGAF. I’m just psyched you’re cooking on a fire.”). Our circle stretched, then shrank, as newcomers drifted over and others drifted off, the night sounds softened by all those leaves. 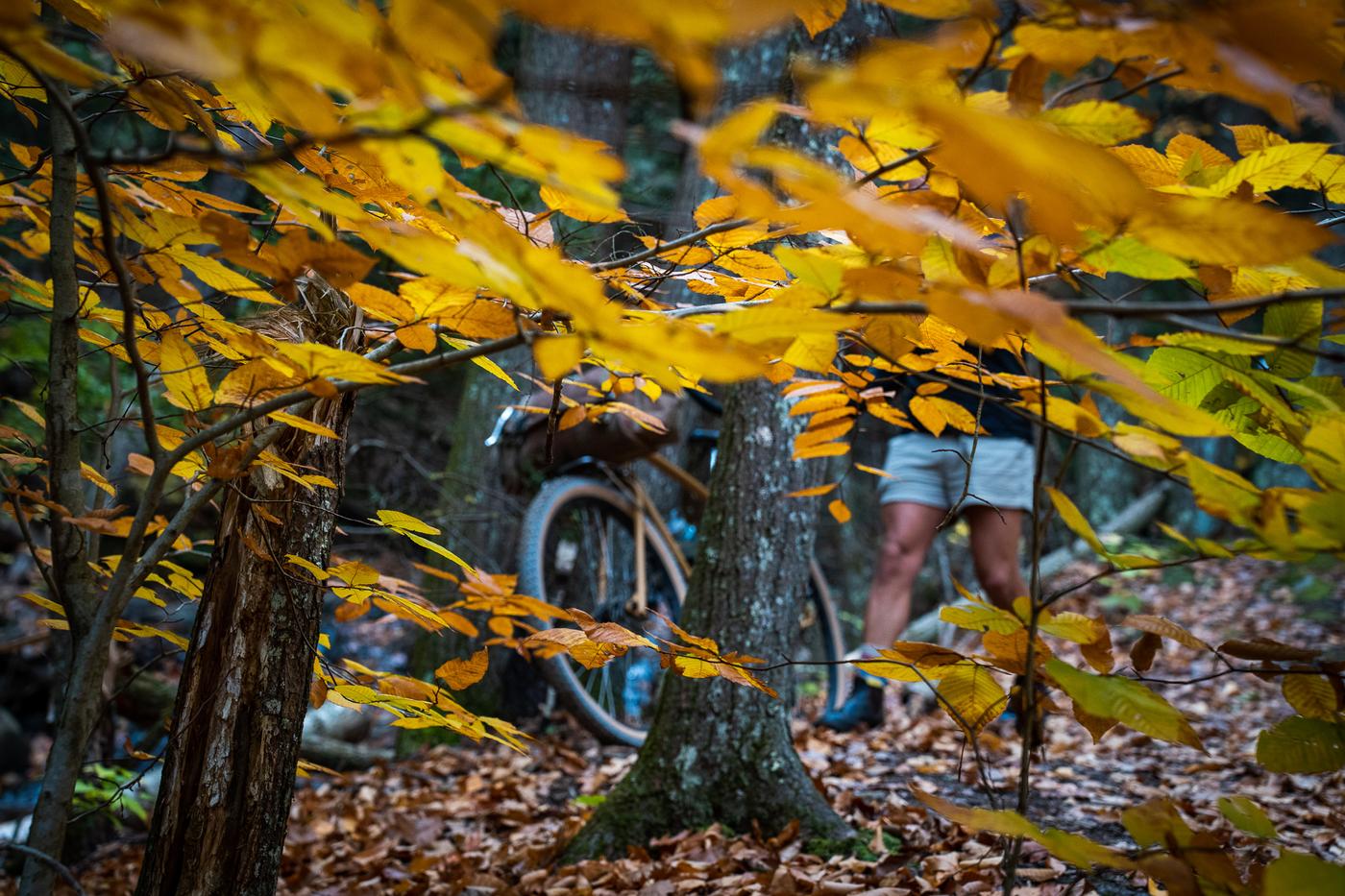 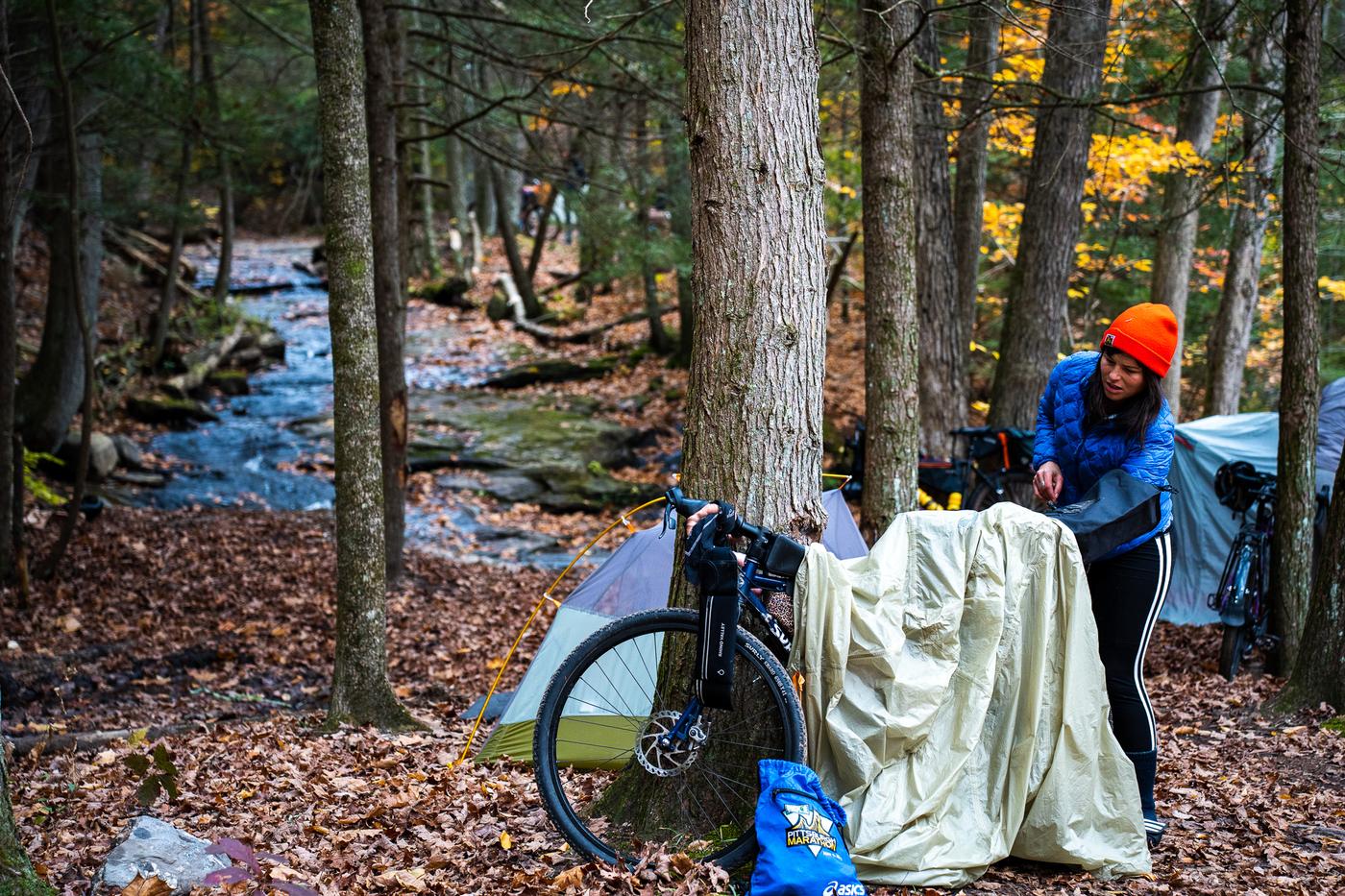 A gray morning greeted us bleary-eyed and caffeine-starved campers. With rain in the forecast, we packed up in a hurry and reconvened with Adam and Jordan to remedy the coffee situation. A few forest miles later and we found ourselves on a corner in East Hampton, at the Eco Coffee walk-up window. The proprietress presented a kind of stern hospitality, but after nailing our americanos (I prefer about equal parts coffee to water) and delivering first-rate breakfast sandwiches, she wholly won our group over. So much so that we stayed for nearly two hours—after a fast-paced summer, it was nice to linger. Soft times indeed! 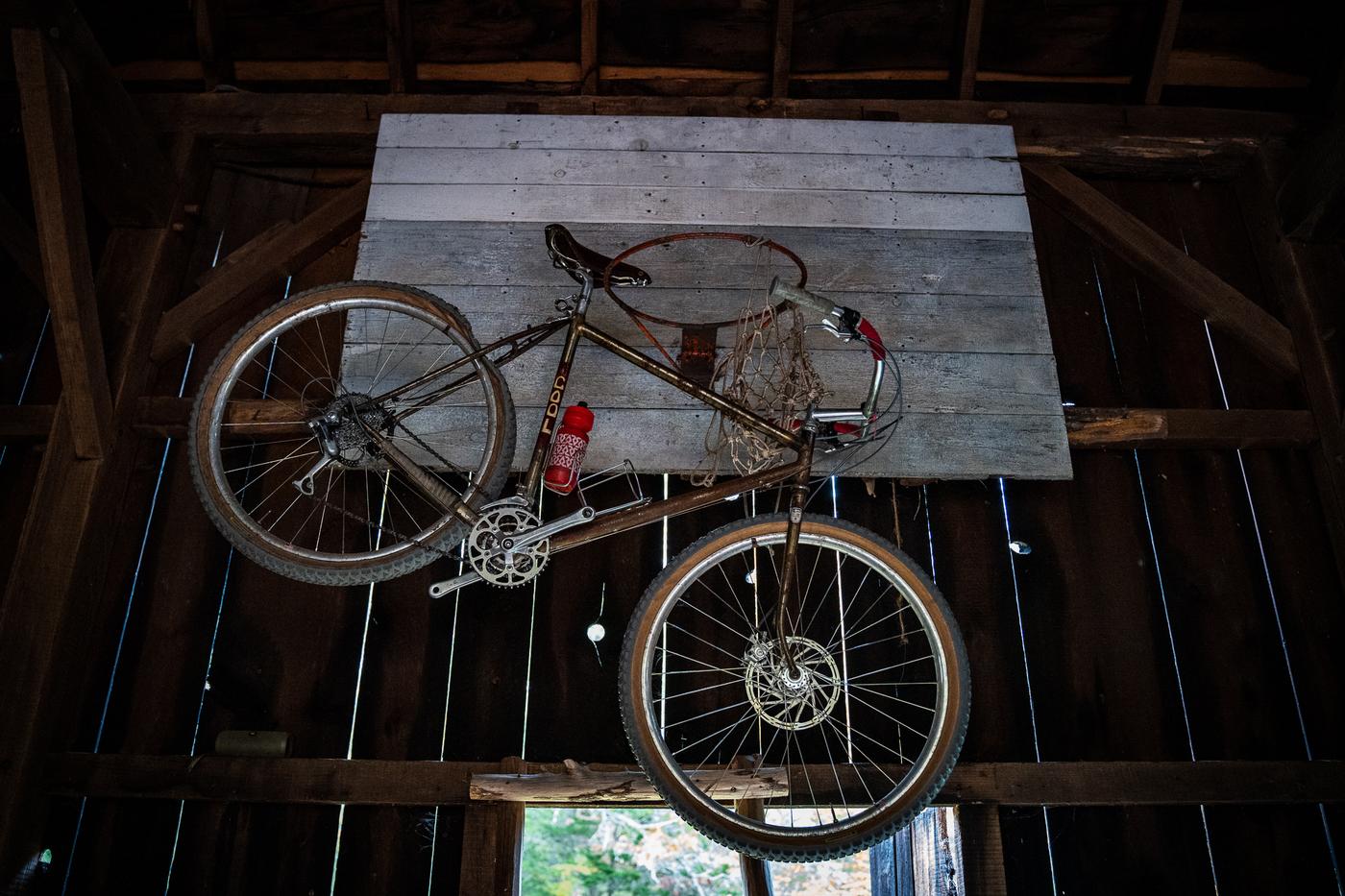 We closed the loop back to the car with whoop-worthy trails and dirt delights, a stop at Ronnie and Arya’s where our fellow Nor’easterers gathered in the barn-turned-workshop, and—finally—back across the ferry just as the forecasted sprinkles started to fall. On our return ride, the ferry MC (official title) was in disbelief at how many velo-roamers had come out for the weekend and was further bowled over to learn that someone on our very boat had come all the way from San Francisco.

Later that night, gathered around another fire (indoors this time), when asked why he keeps the Nor’easter going, Ronnie said, “I want to create an event that I’d want to go to.” From the looks of it—with all the love and thought that goes into it—he’s created one that plenty of others feel called to as well.