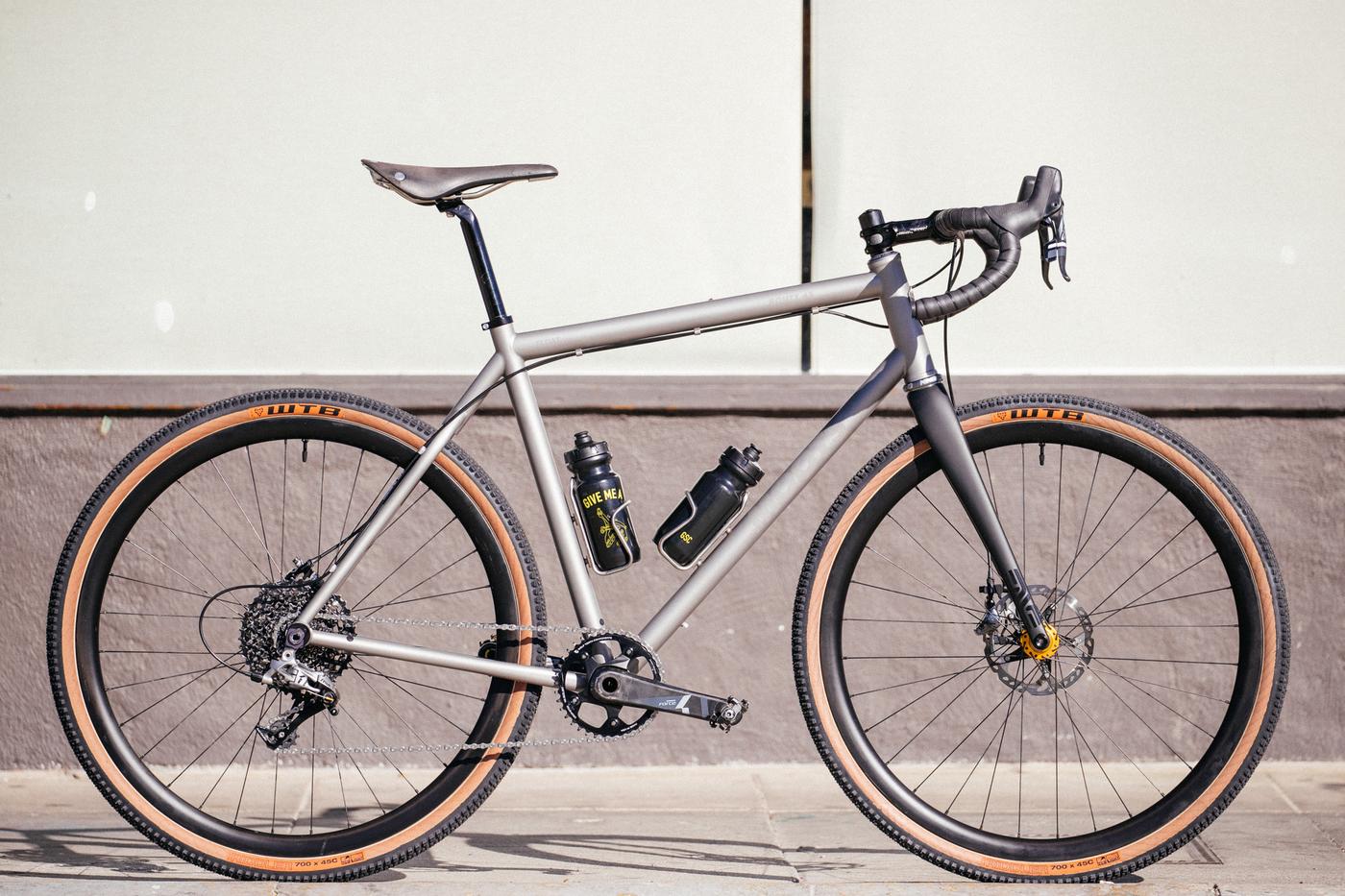 With a road geometry, clearance for a 45mm tire, longer stays and the zippy, lightweight feel of titanium, the Routt 45 is a contender for one of my favorite, production drop bar bike on the market. Over the years, we’ve seen Moots make large leaps out of the traditional, doctor and lawyer marketplace of high-end performance road machines into more back-country oriented exploration vehicle market. That’s not a great surprise either, as even the automotive and motorcycle markets have seen a shift from speed-centered experiences to more “adventure-driven” vehicles. People want to get out more, away from the crowds and away from the confines of asphalt-driven transportation.

Tom upgraded from a steel ‘cross bike that was a little short on him in terms of reach, had a higher bottom bracket, steeper angles and a shorter chainstay to Moots’ Routt 45 platform, a bike that addresses each of these geometric concerns with their own take on what it means to be a road bike tailored for all roads. 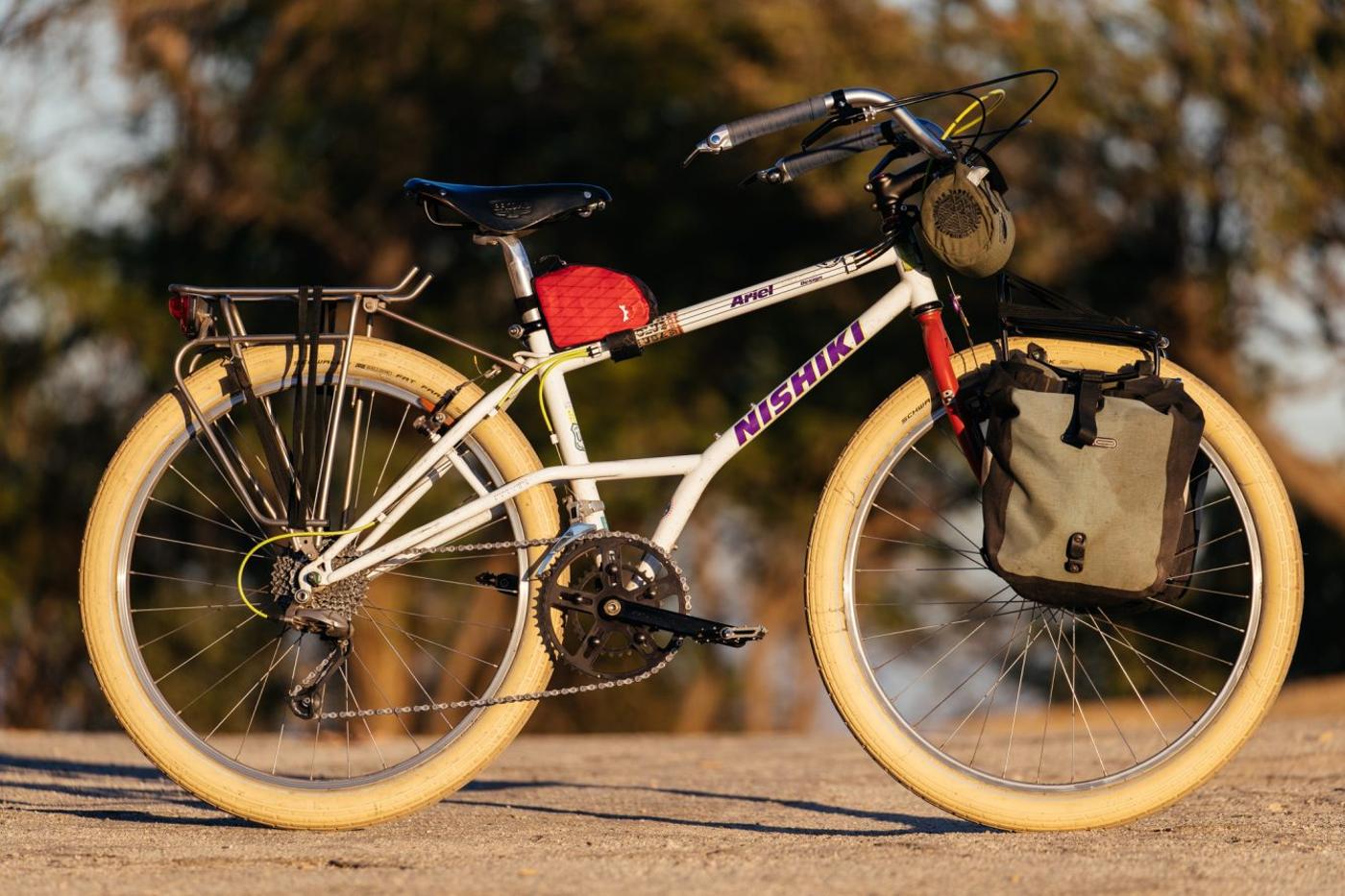 Scotty 2 Hotty is a local staple here in Los Angeles. He’s what I like to call an autodidactic raconteur or a self-taught man with lots of informative ramblings. For those of you who have ventured into Golden Saddle Cyclery, you’ll probably recognize him as a patron of the bike shop and literal sponge of knowledge. While Scotty is a farmer and a consultant for soil nutrition, his passions in life exist far beyond the liveliness of plants. His favorite subjects include but are not limited to fishing, gliders, obscure bicycle parts, firearms, fishing, boating, Shimano, both reels, and bicycles. His Nishiki is just another example of his keen eye for detail. 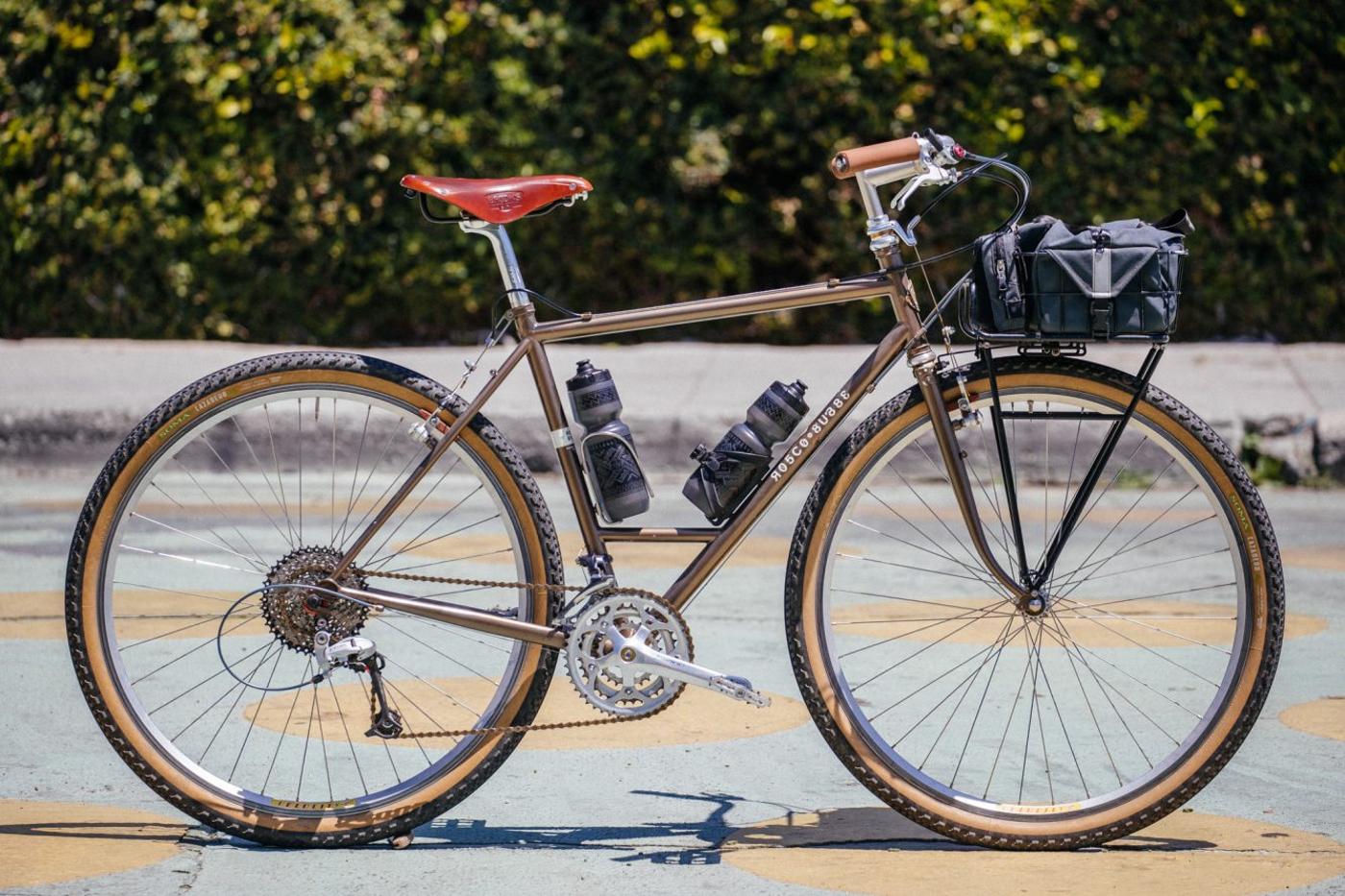 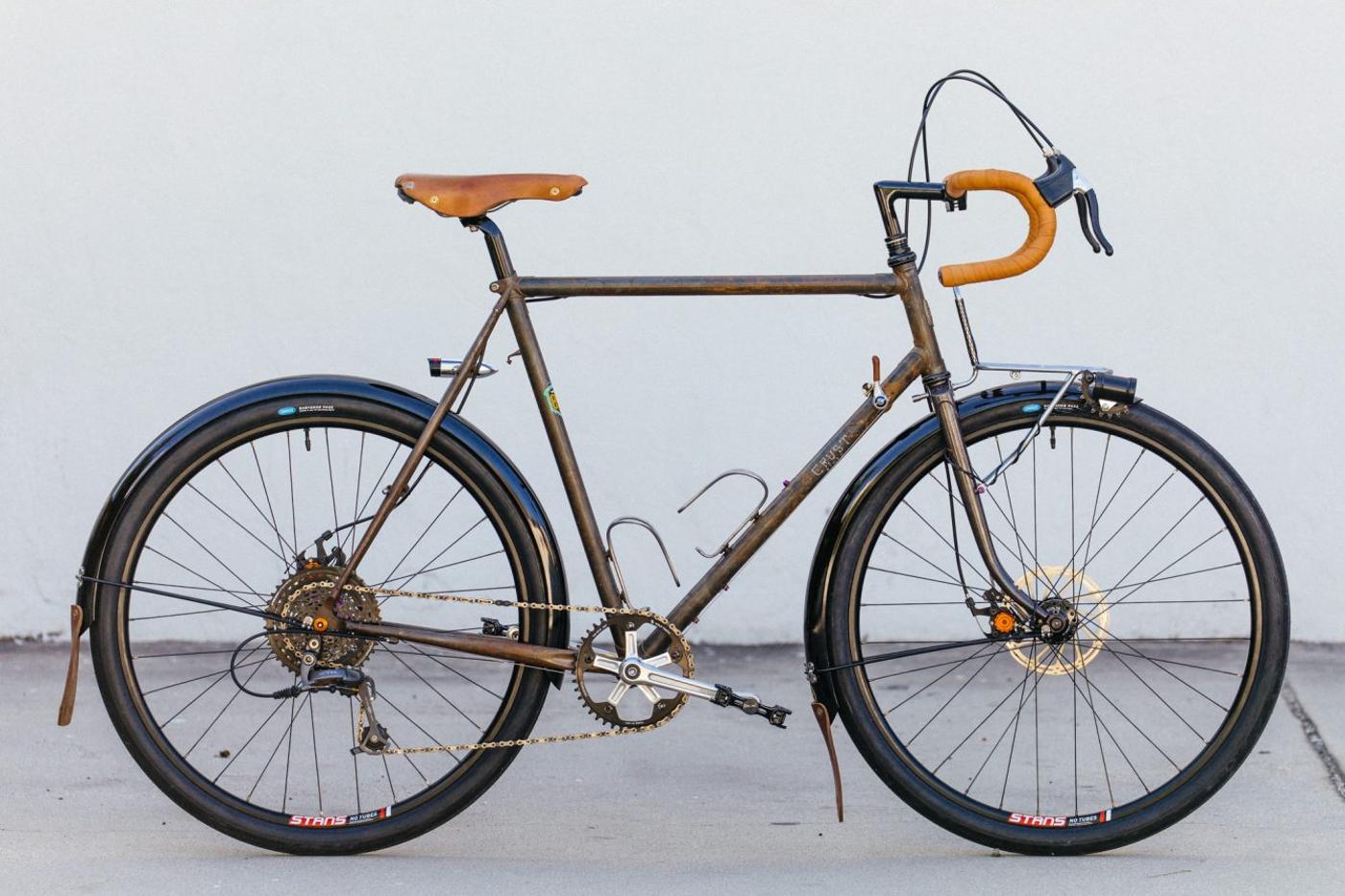 Scott’s Romanceur might just be my favorite Crust Bikes I’ve seen to date. Sorry, Poppi! So what makes this build so special? Well, for one, its build kit is well thought out, but not by any means standard. The components used are a healthy mix of classic and current, with a heavy nod to French constructeur builds. Gilles Berthoud is the brand of choice for all the leather work, yet the mix of Japanese drivetain components, updated with modern Wolf Tooth accoutrement. For instance, the Roadlink allows the use of older XTR derailleurs with cassettes like the E Thirteen wide range TRS+, all operated by a friction shifter. The classic Dura Ace cranks run a modern Wolf Tooth ring. From there, the build just gets better, with purple and blue anodized bits, including Phil Wood’s rear road hub and various bottle cage bolts. The front SON completes the hub selection, which are laced to Stans rims and rolling on Compass tires. These wheels are covered by Sim Works fenders with Gilles fender flaps. A Sinewave lamp is held to the Nitto rack by a chain ring mount hack. The Velo Orange bars are held by a Nitto stem, with a Cane Creek headset, and Mafac levers are paired with Paul Klamper brakes. One of my favorite details is the ultralight Tune skewer on the rear! 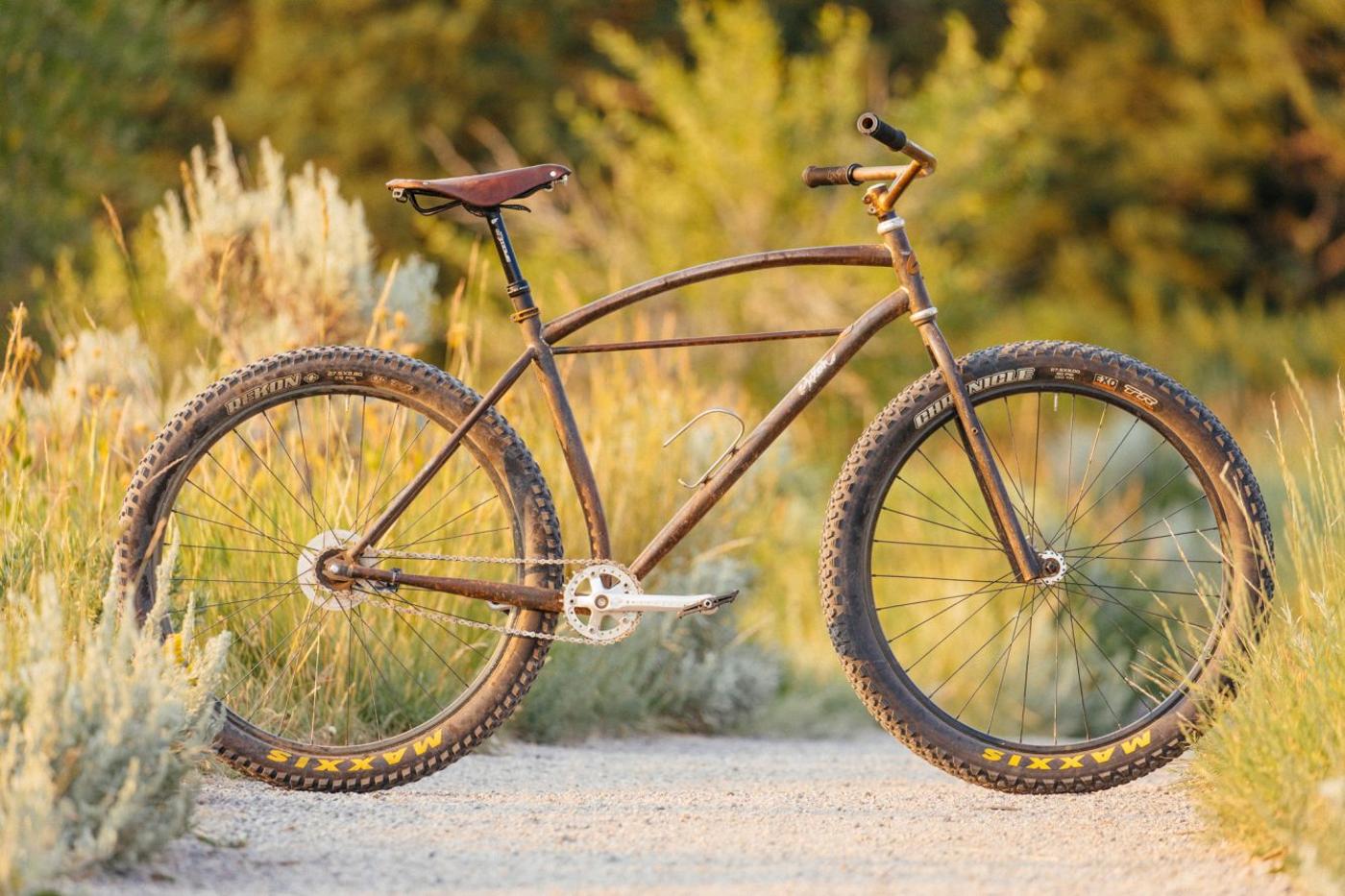 There are some bikes that deserve more than to be shot at NAHBS. That’s what I told myself anyway with this bike. When Adam brought his “Sklunker” to Connecticut this year for the show, he asked if I wanted to shoot it. My answer was “hell no! we’ll shoot it in Bozeman instead.” His face lit up since we had only briefly talked about hanging out in Montana briefly and already I was committed. Fast forward a few months and here we are, amidst the green grass and high mountains of this quaint little mountain town.

Adam had a good amount of scrap tubing laying around when NAHBS approached. Earlier in the year, he bought a tube bender to make unicrown forks, which he tested out before deciding to build the matching frame. He didn’t build this bike to bring to NAHBS, it just happened in a serendipitous way. So, he had the fork, and frame, but what about the parts? His buddy Corbin from Black Sheep makes these heat sink cooler hub shell clamp on jammers that prolong the lifespan of coaster brakes and reduces the wear and tear on the shell. They’re called Flat Out. They’re $100 and are pretty neat! 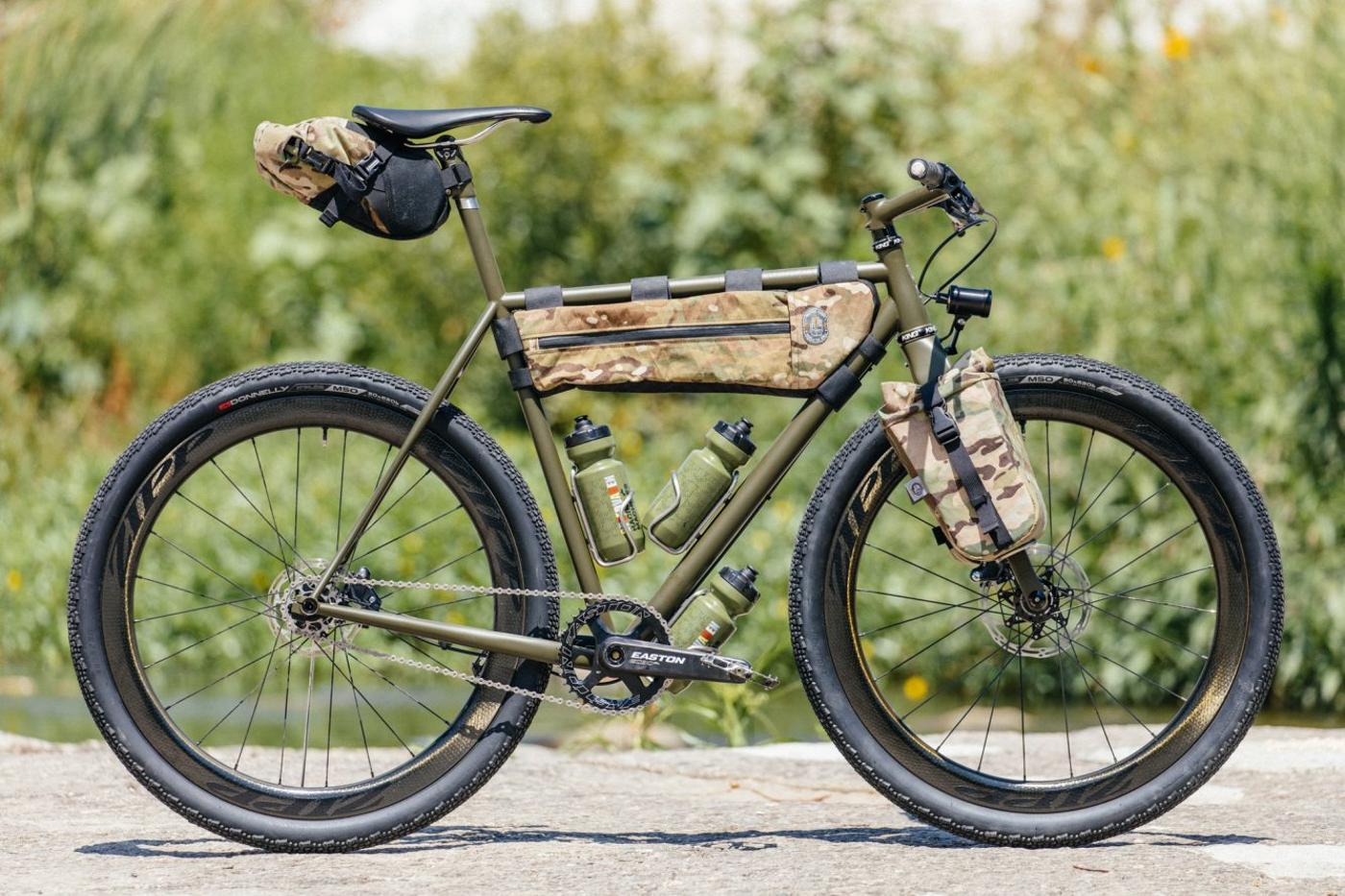 As part of the Vanilla Workshop Build Off is the Speedvagen GTFO, which is perhaps the most unique builds to come from the Speedvagen brand. The team began with the idea of the Urban Racer – a stripped down, fast-paced, innercity bike – and expanded on its usage to the city and beyond. After design meetings and prototype, the GTFO was born, a bike designed to get you out of the city as fast as possible for an overnighter.

The GTFO comes with Syntace dropouts, making it easy to run either geared or singlespeed, in two models; the PRO model comes complete with Andrew the Maker bags, a painted to match bullmoose cockpit, and ZIPP wheels, or the normal package, which comes sans bags, a standard painted to match stem, and EA70ax wheels. 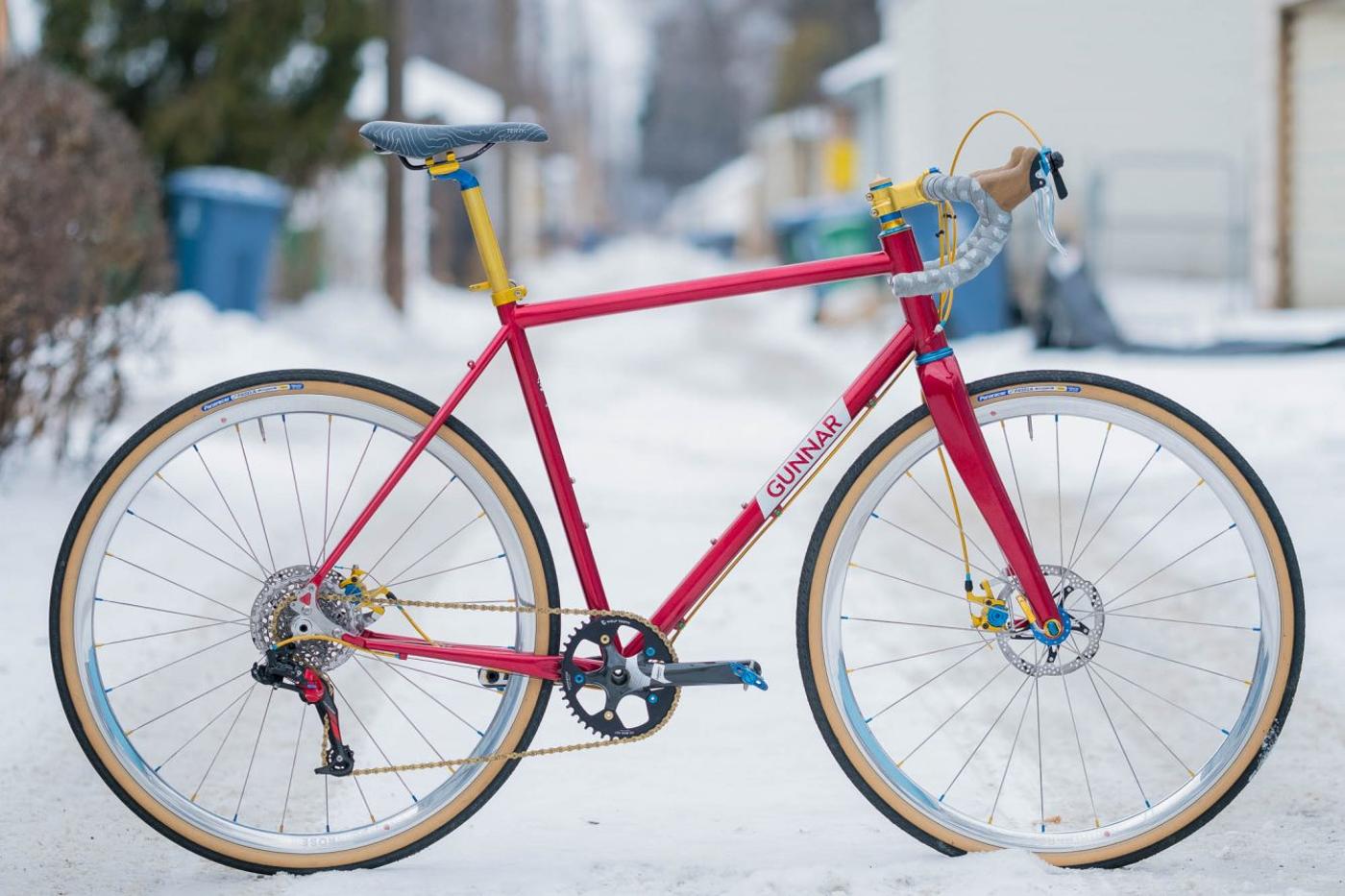 This bike has a lot going on and I love it for that very reason! I’ve seen a lot of bikes built around a theme, one where you wonder where the mind of the person wanders.  This bike is one of those.  Initially, an Ocean Air Cycles Stem Top sparked this build which then turned into one of the best uses for gold and blue ano on a bike.  The mash-up is so good, I had to double take.  Anna’s Gunnar is covered with matching Paul Component from top to bottom, but my favorite pieces are definitely the Klampers. From there its built with a wild set of Gevanalle shfiters, White Industries headset and a mix of SRAM components. 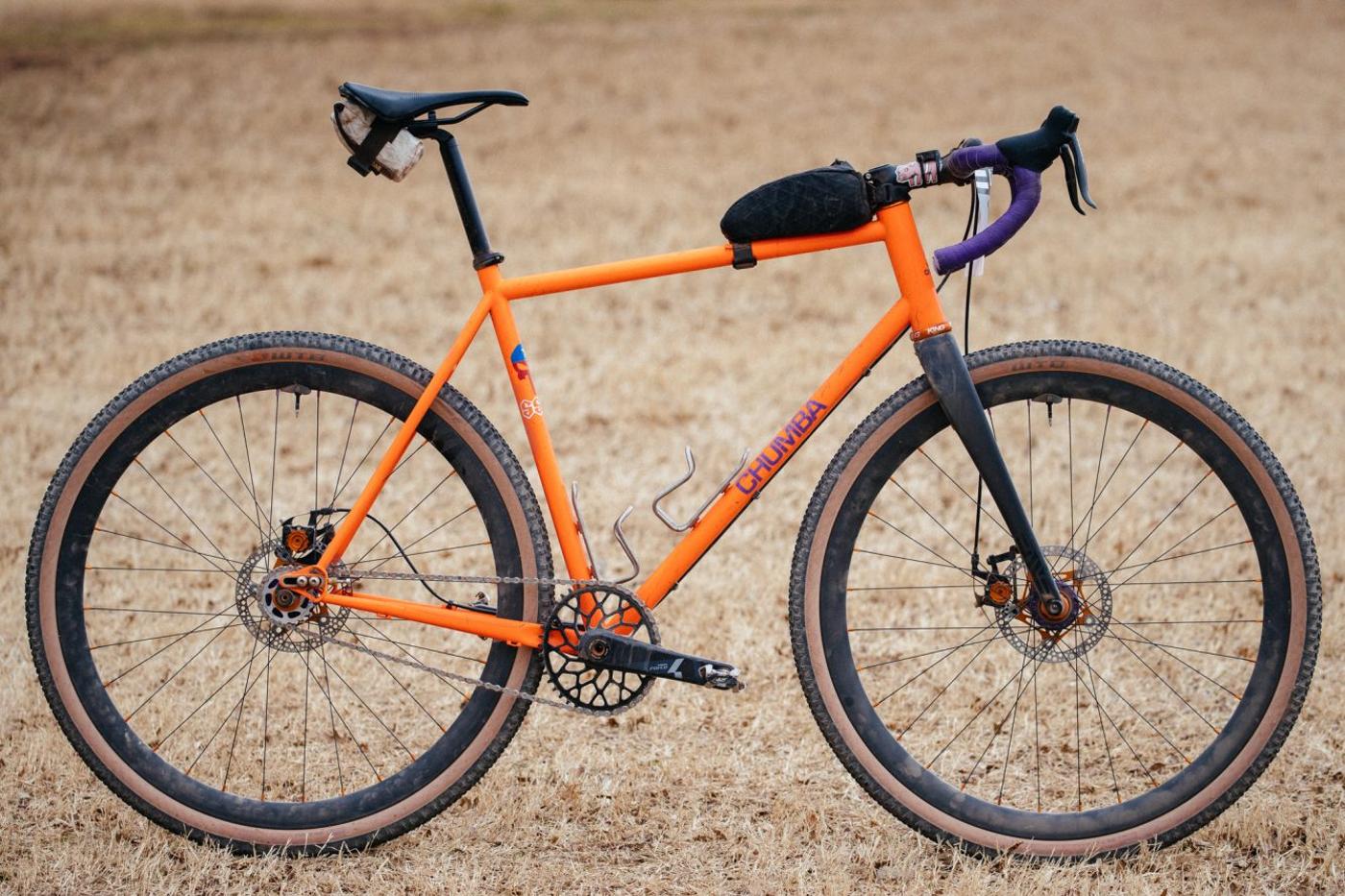 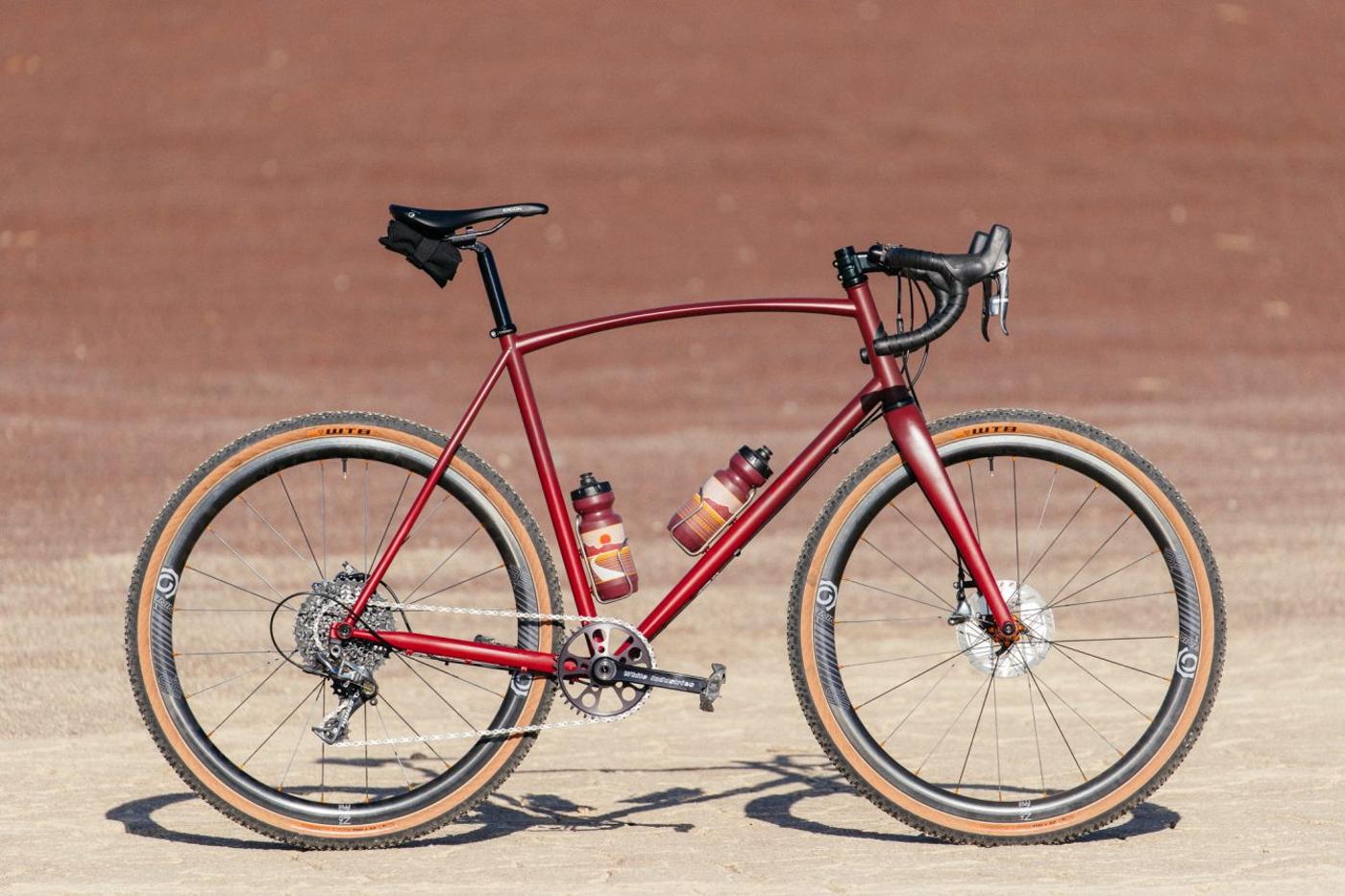 Then Adam Sklar sent me an email, asking if I had any desire to review one of his “team” MX all road bikes. I glanced at the geometry, saw the top tube length and thought it was going to be too long for me, especially for how I’d use it. Adam informed me of this bike’s design philosophy, which is part ‘cross geo and part modern MTB. Paradoxically, in short, Adam lengthened the bike’s top tube, slackened the head tube and lowered the bottom bracket. The bike is designed to run a shorter stem, a 70mm, versus a 110mm and with a longer head tube, puts the riding position a bit more upright. The consensus after riding this bike all year is, it rips! 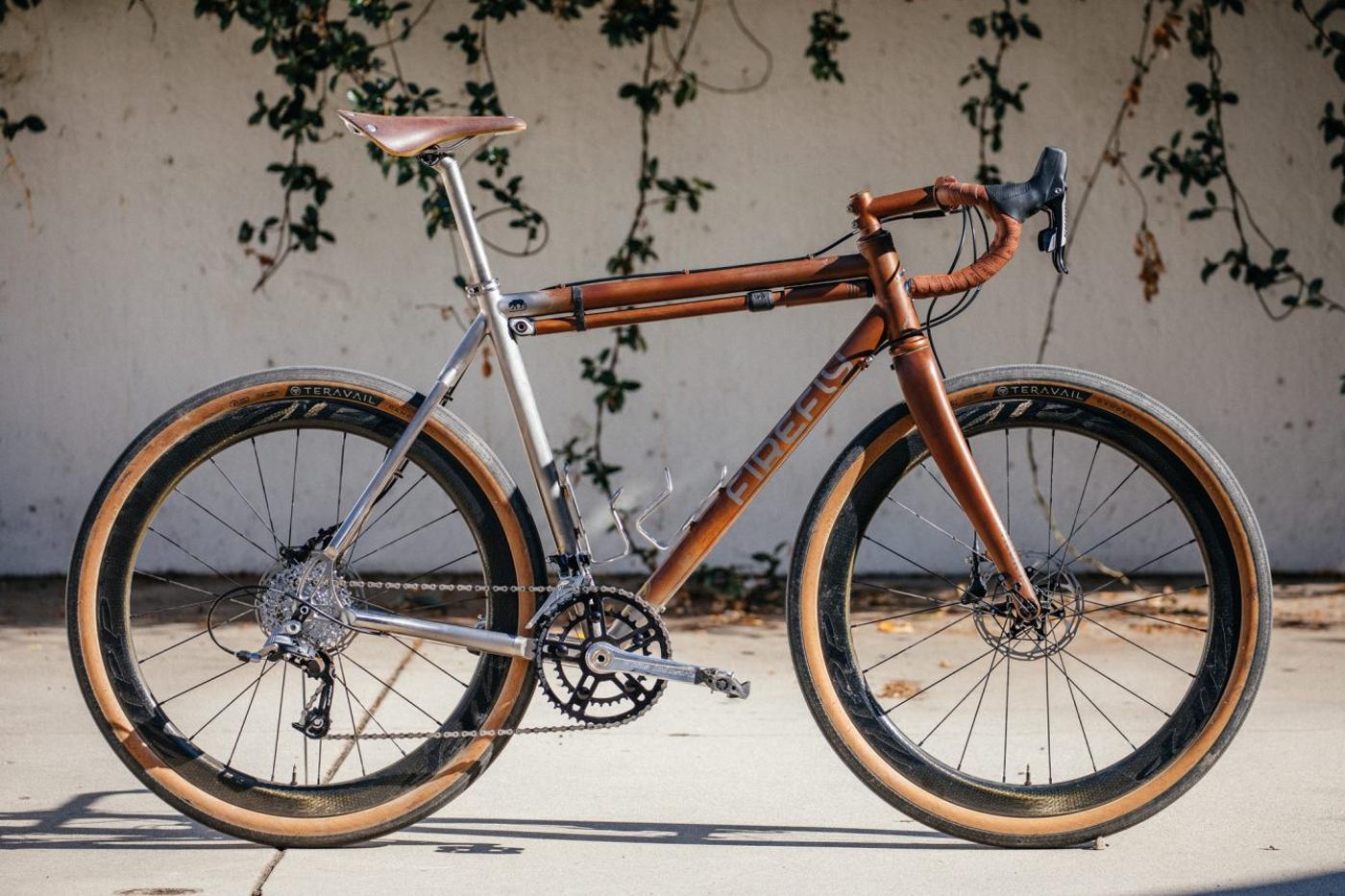 Much like this bike’s inspiration – a chopped and altered rat rod car – the Rad Rod shows use, not abuse, and now has a new found face as a 2x chubby road bike. The bike’s fit and build are perfect for dirt road rides in the mountains that surround my home in Los Angeles and beyond. Adapting this bike with Firefly to their new technology was a joy to watch and the bike itself has been a joy to ride! 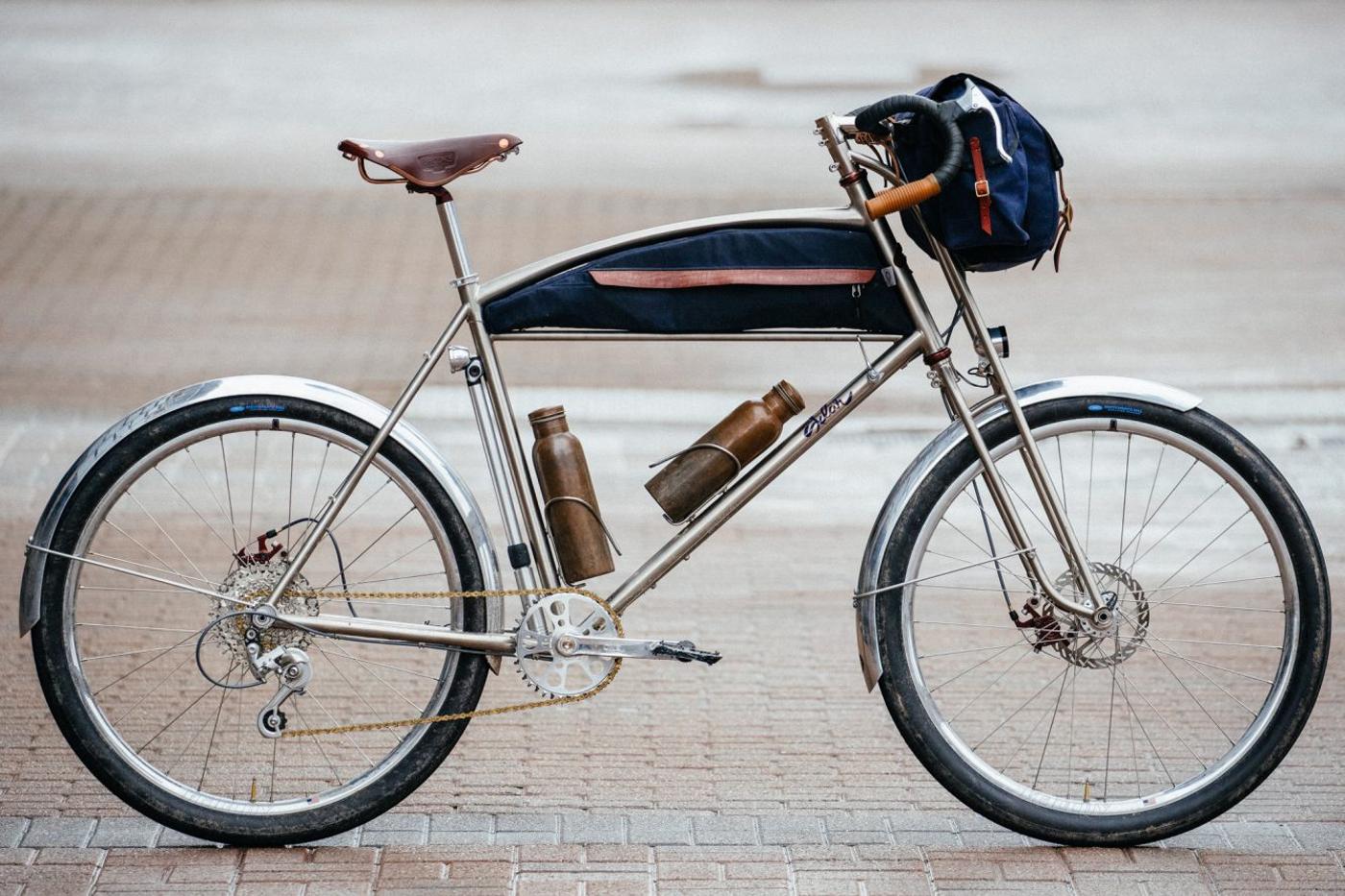 I mean… I know this makes three Sklar Bikes in this list, but look at this freaking bicycle! 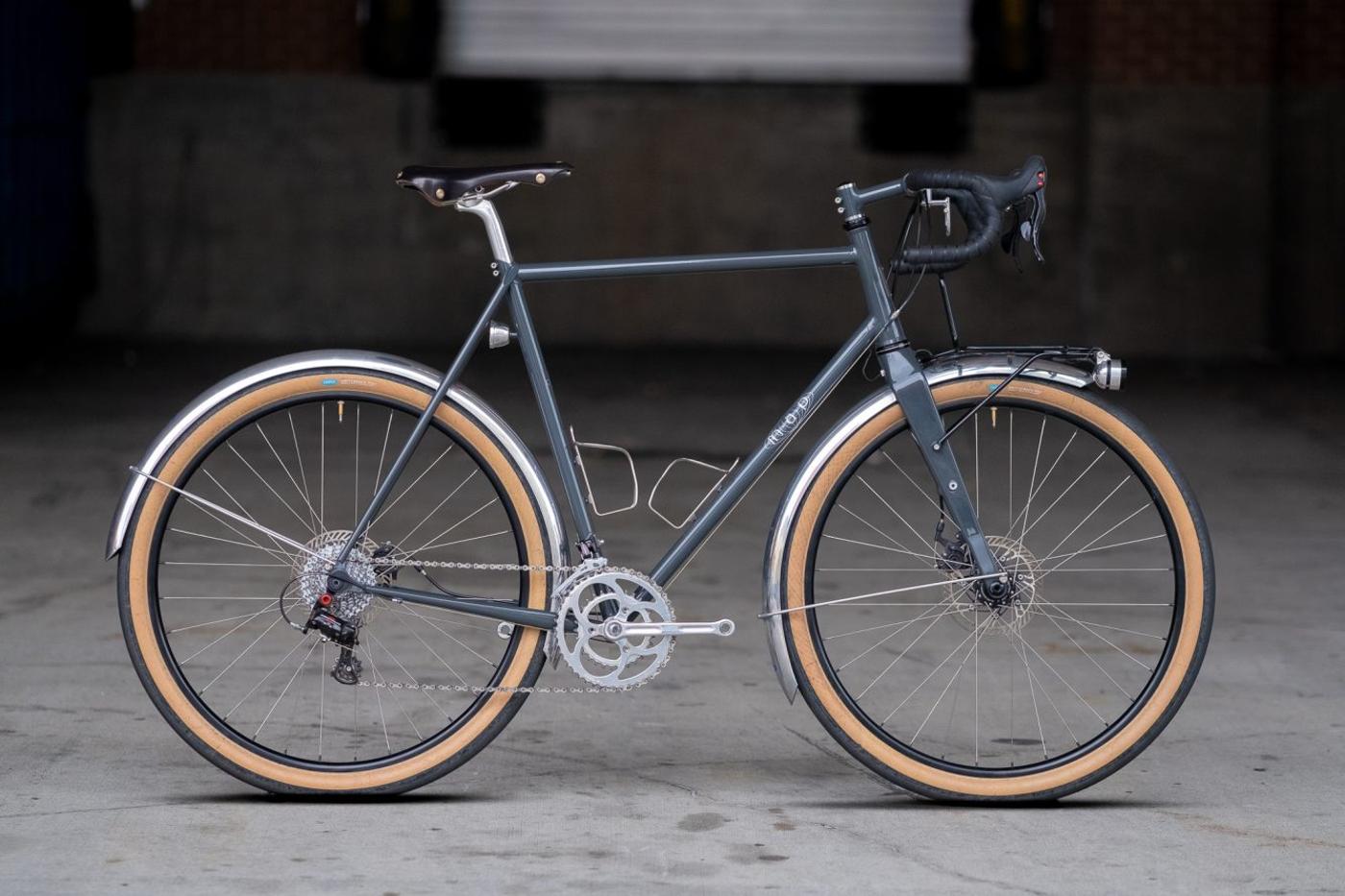 This one really sizzled from Jarrod Bunk’s Philly Bike Expo reportage. People loved seeing a disc Map Bicycles with a carbon fork. Mitch might be best known for making his classic randonneuring frames, so perhaps that’s why? Did you dig this bike? If so, explain why below. I’d also like to send some love to Mitch, who lost his entire shop in the Camp Fire.

Thanks to everyone who made 2018 such an excellent year at the Radavist!