I doubt the readers of this website need an introduction to the brand Salsa Cycles, but what about the brand’s genesis? Today’s From The Pro’s Closet bike features Ross Shafer, the founder of Salsa’s 1984 Custom. This bike, much like Salsa itself, is riddled with lore, so we pinged the lore meister himself, Tasshi Dennis, to dish out the goods. Grab a bowl of chips and a dish of salsa, and get yourself a big scoop below…

In 1982, while working a gig at Santana Cycles, Ross Shafer would construct what he would describe at the time as “the only five mountain bikes I will ever build.” Since these bikes were a distinct departure from the road, cross, and tandem bikes he was building under his own Red Bush label, he would give the novel knobby tire bikes a new “Salsa Cycles” name. As we know, 40 years down the road, this would turn into something much bigger. Today you can select from a wide spectrum of Salsa bike models, still primarily catering to a knobby tire or dirt-oriented ride. 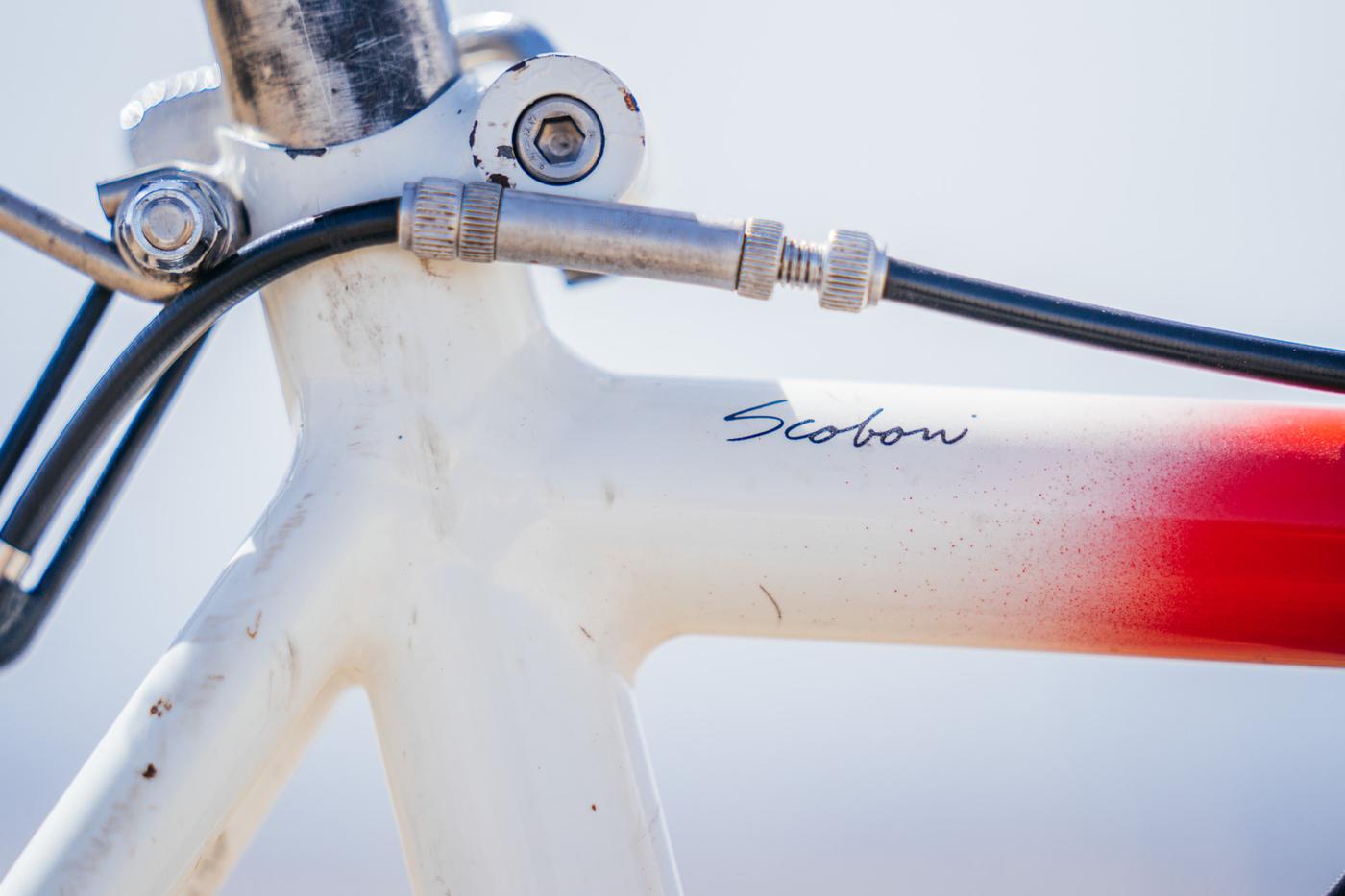 Ross’ first personal mountain bike, known by the serial number “SCOBO” as short for his Italian-styled nickname Scoboni, would get ridden hard for a couple years. While examining the bike in preparation for the Whiskeytown Off-Road race to be held near Redding, CA, Ross would notice that the downtube was cracked. Although the bike would eventually be repaired and used as a shop bike, loaner, and test mule for a long time, Ross was without a working bike with little time before the race. Dejected, Ross would rally and spend a sleepless night building an entirely new frame with lighter weight tubing and unicrown fork blades that had become available in 1984.

Having just a day left to drive up to the venue, there was no time to fully finish the frame, so Ross built it up with parts and took it to the event without filing down the bronze fillets joining the frame tubes. Finishing the fillets with files and sanding gives smooth transitions but is painstaking work. Of course, there was no time to paint the frame either, so it had a raw appearance that has only more recently become an aesthetic of its own. While at the campground during the race weekend, Ross was talking with aluminum mountain bike pioneer Charlie Cunningham and dreading the fact that he had to go back to his shop and clean up the fillets to make it look nice after getting home. 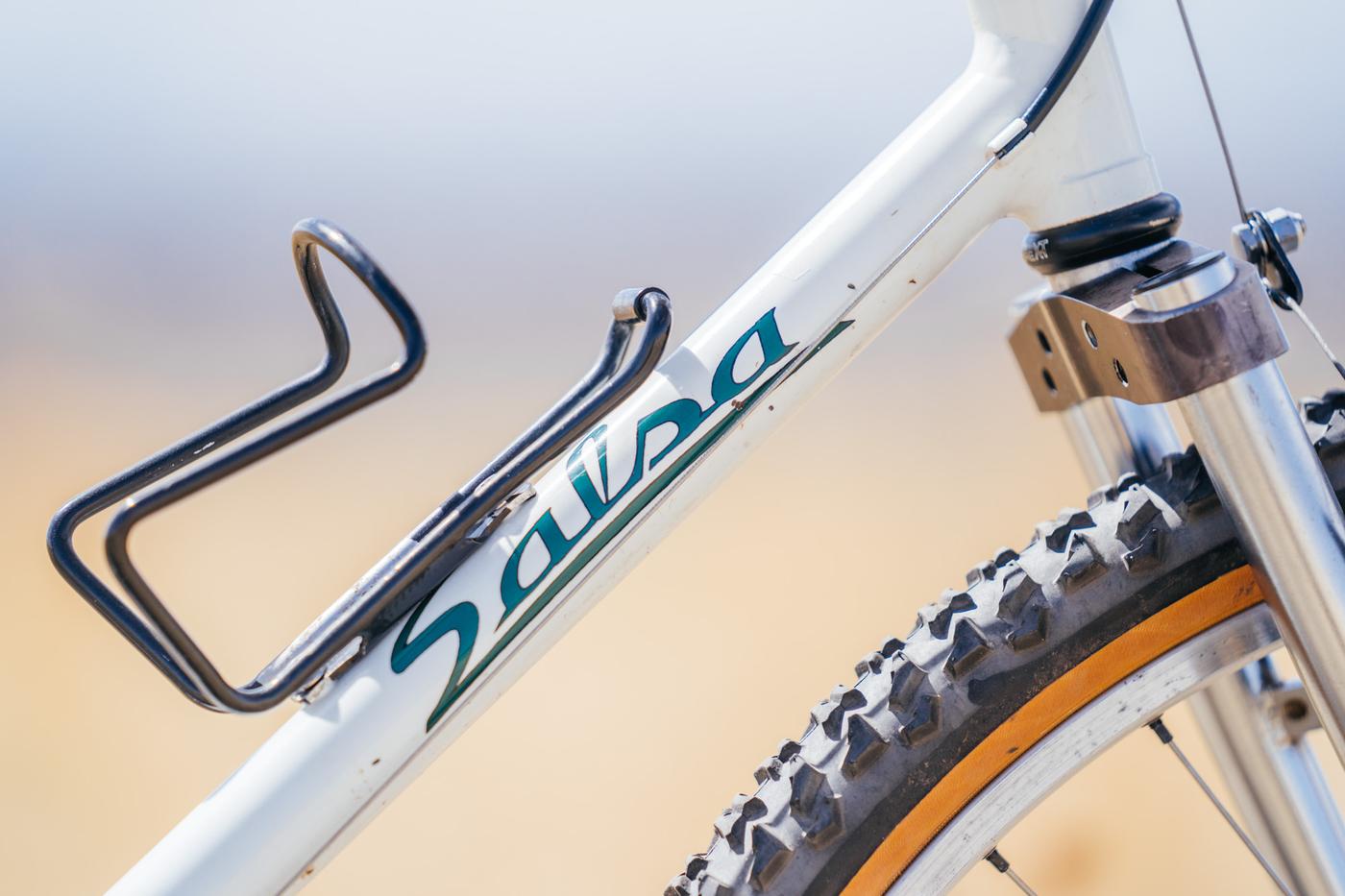 However, Charlie told Ross that his fillets looked great, the worst fillets can be filed to look great, and he should show off his workmanship instead of cleaning them up. From that point forward, Ross only sold one more brazed frame with fully finished fillets, by special request at an extra “con todo” up-charge of $300. Ross upped his brazing game and soon mastered the “no-file-fillet” technique, to the degree that it can be difficult to tell that a joint hasn’t been fully finished. 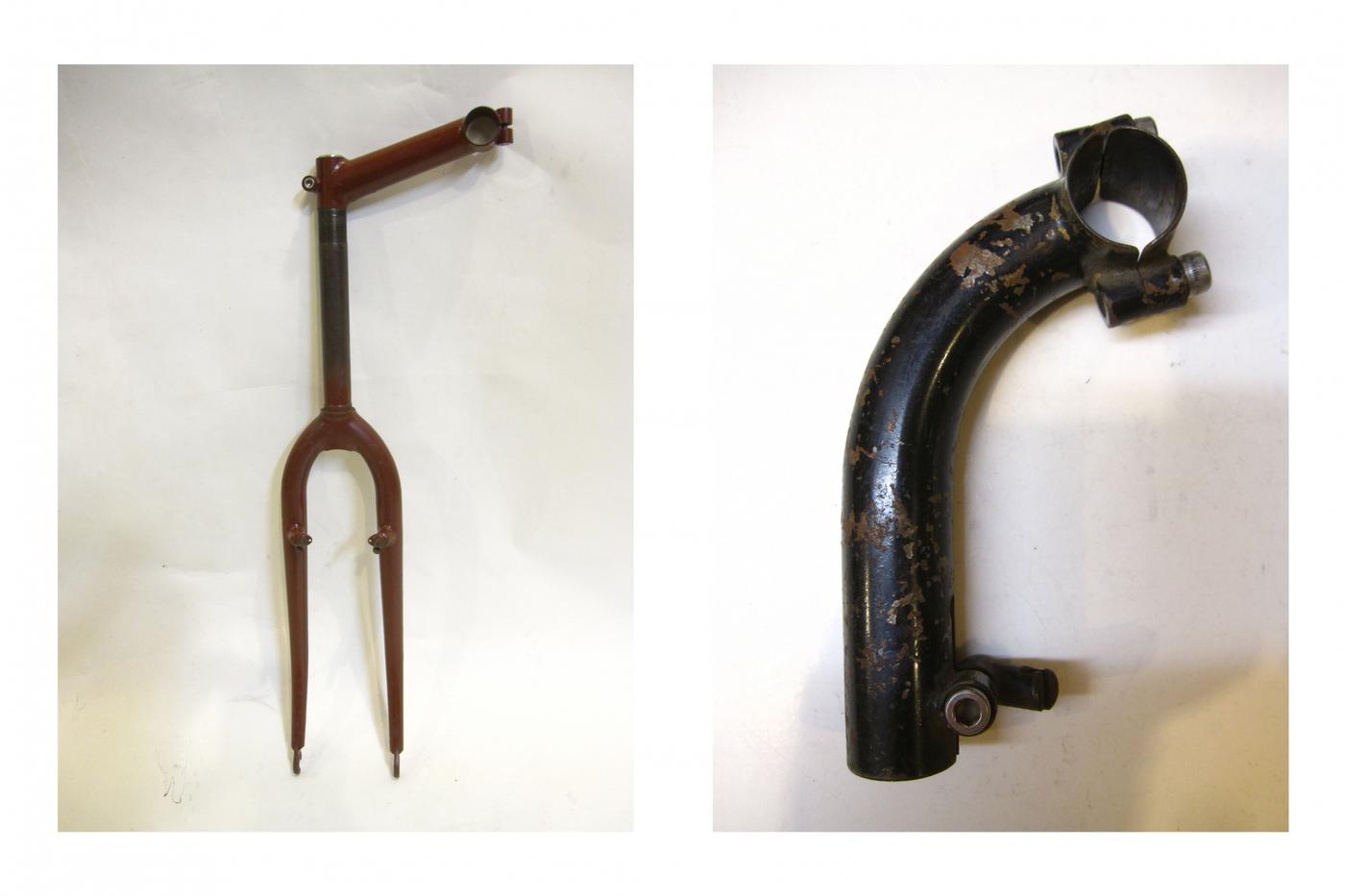 With a serial number of 37, this second bike was beloved by Ross and ridden hard for more than ten years, seeing various changes in configuration and components to adapt to evolving needs and preferences. The original unicrown fork was replaced with a Bontrager Race triple clamp, serving as a test subject before being made standard equipment on production Salsa Ala Carte frames. The Race fork has remained on the bike ever since, although the unicrown fork with original paint still exists, as pictured. 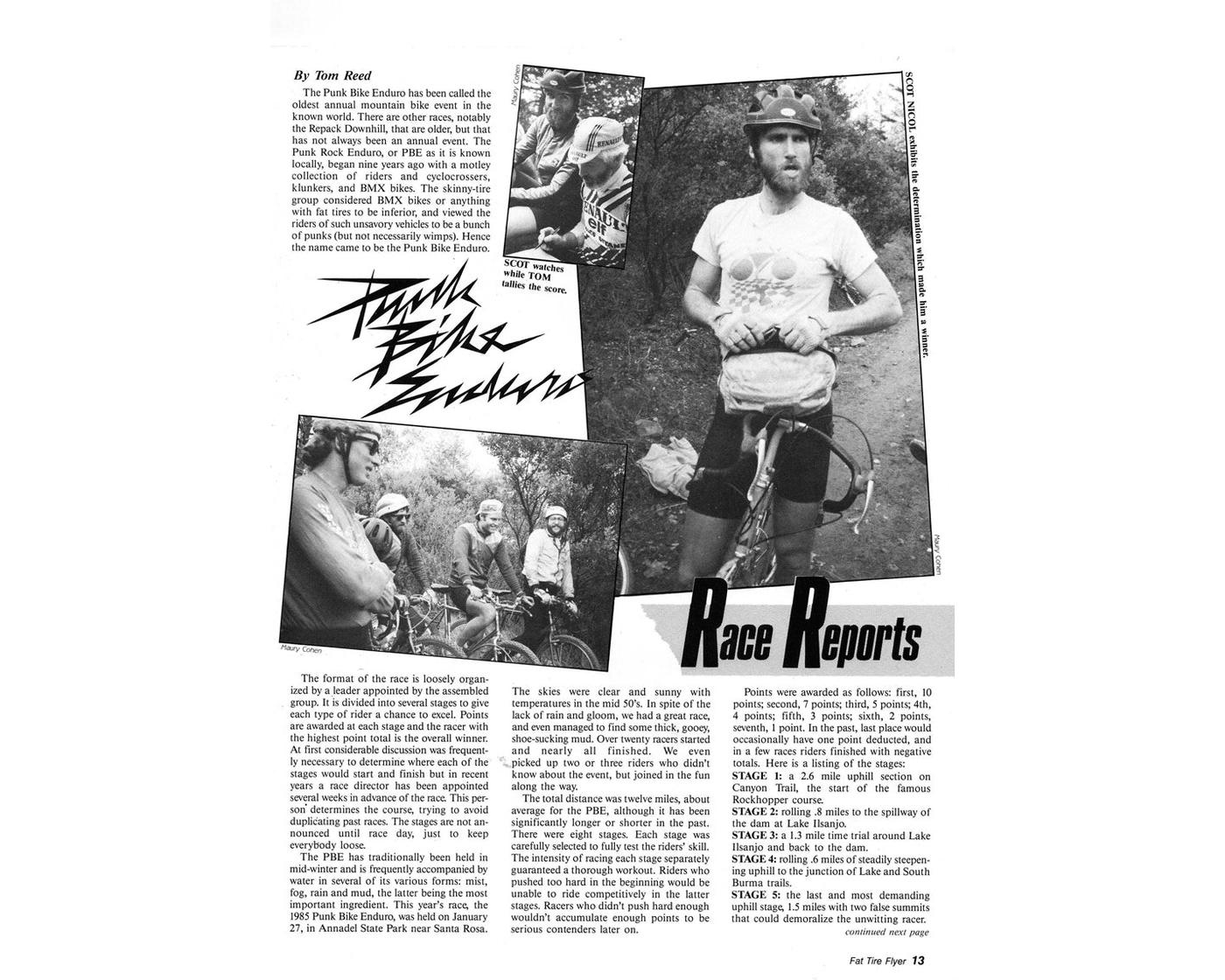 Ross is pictured here with flat bars on this bike, the left photo, the rider on the far right… Credit: Fat Tire Flyer Magazine

The original stem pre-dated the design of the iconic Salsa Moto with roller cable guide and features instead a simple vertical hole through which the brake cable passes. At one point this bike also sported a curved “LD” stem for drop bars, later to be replaced with a more conventional Salsa P7 model as shown on the bike now. 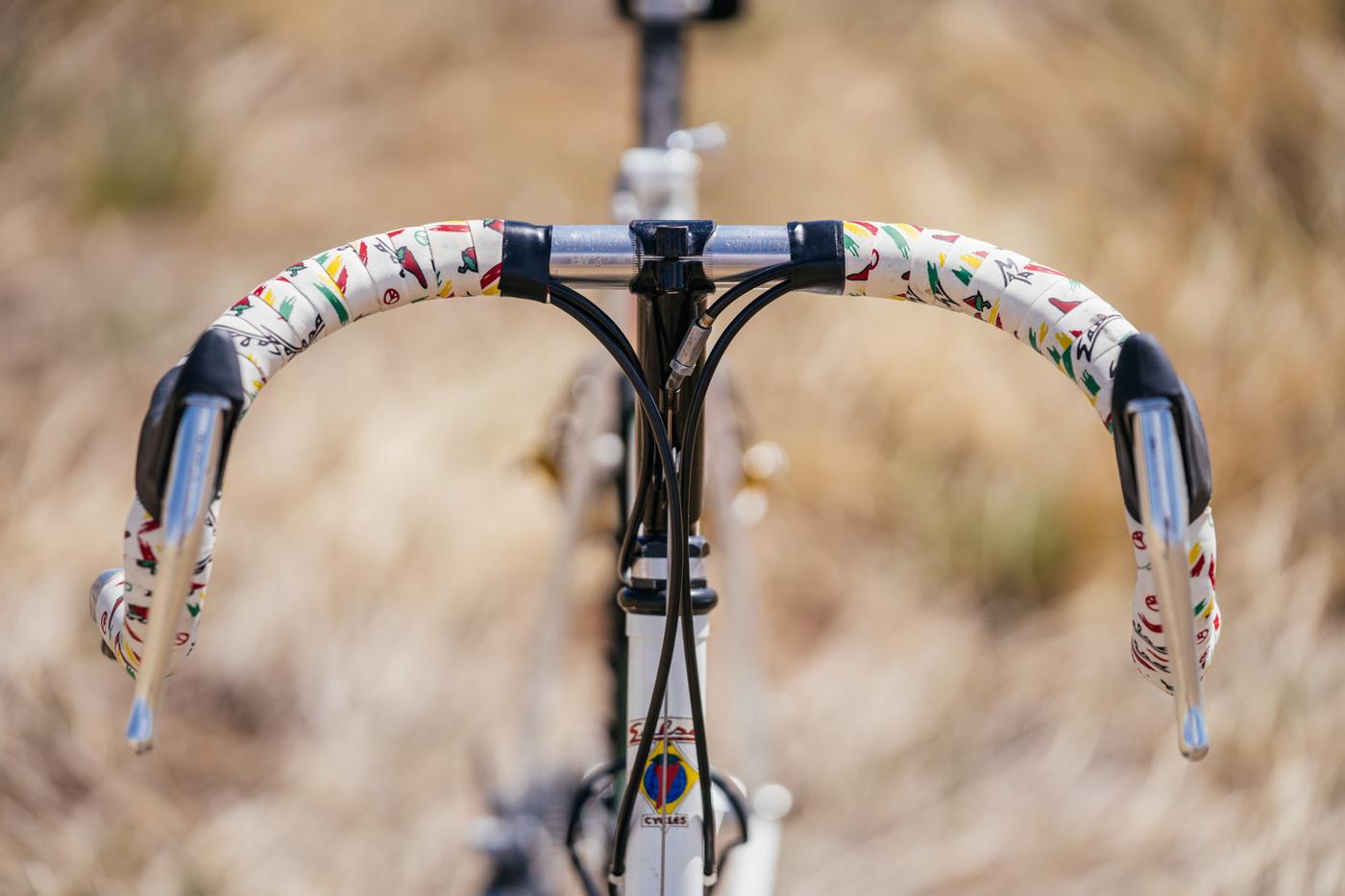 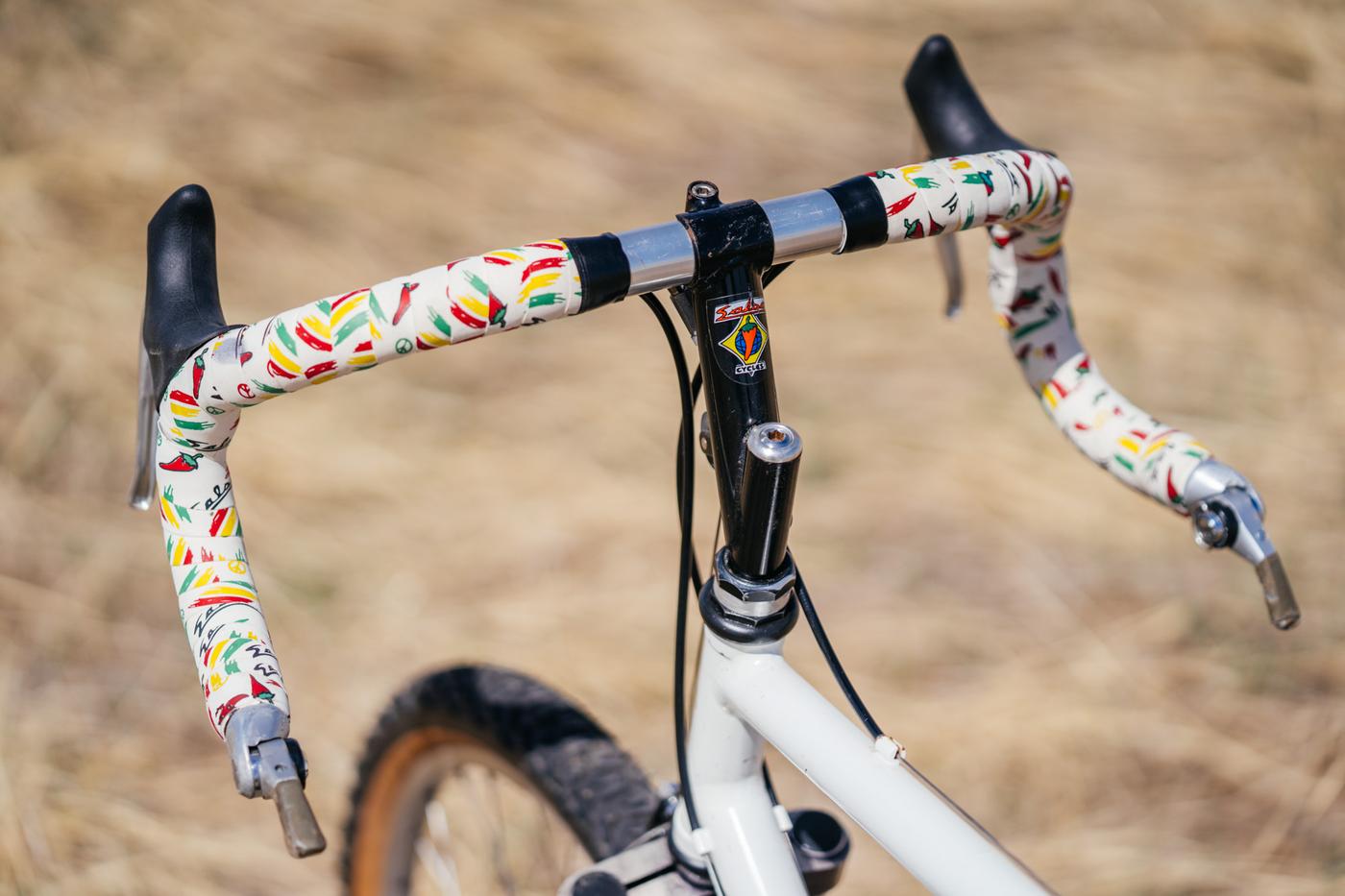 The Specialized RM-3 bars have a relatively small amount of flare for a bar intended for off-road use. However, the tops of the bars have a “criterium style” or track-bike bend to provide more wrist clearance, which in turn reduces the ergonomics of riding on the tops. With the plethora of modern gravel bikes today, there has been an explosion in handlebar options pushing the extremes of both width and flare. Looking back, it’s clear that the design of off-road drop bars is far from settled. 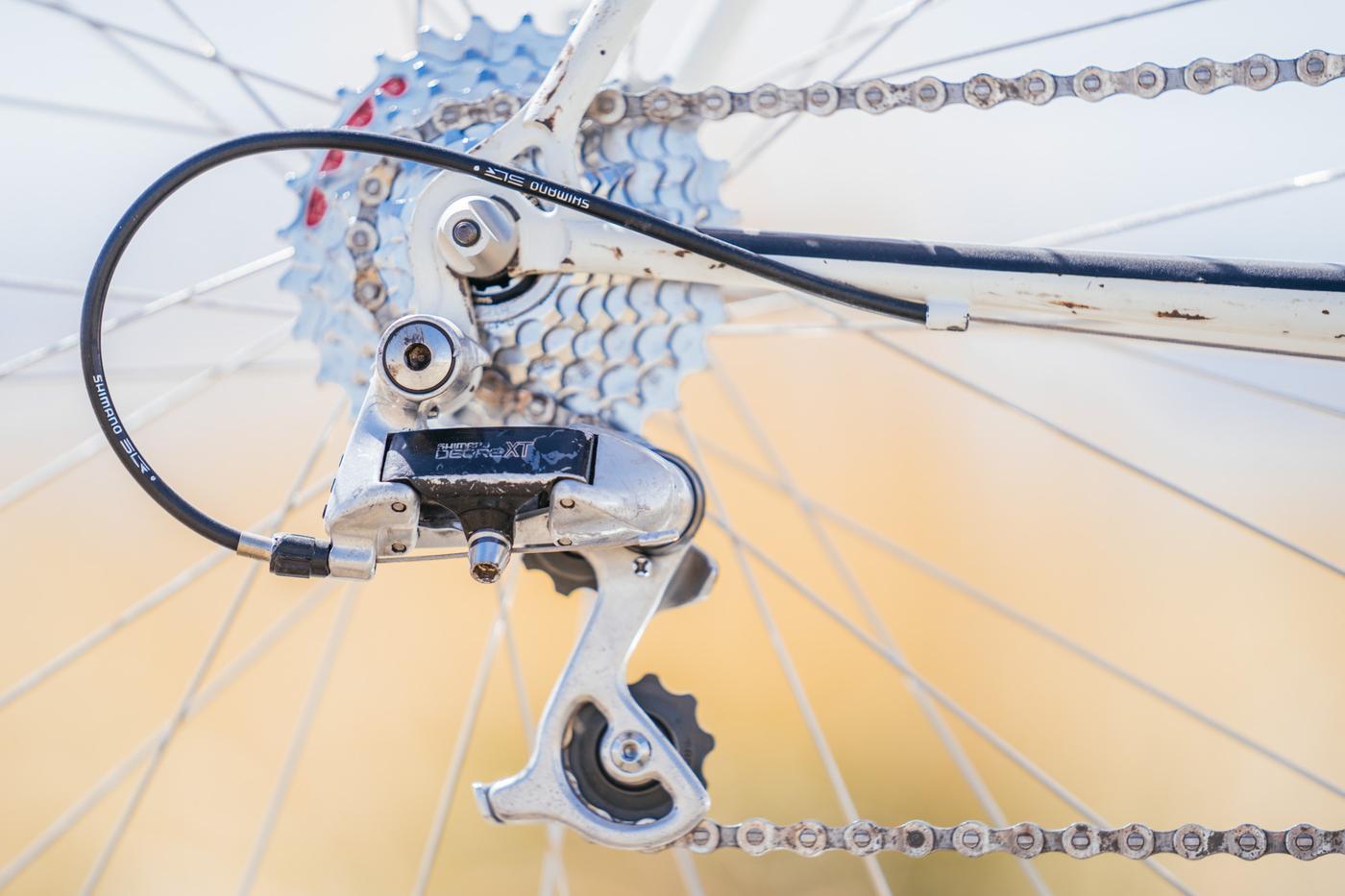 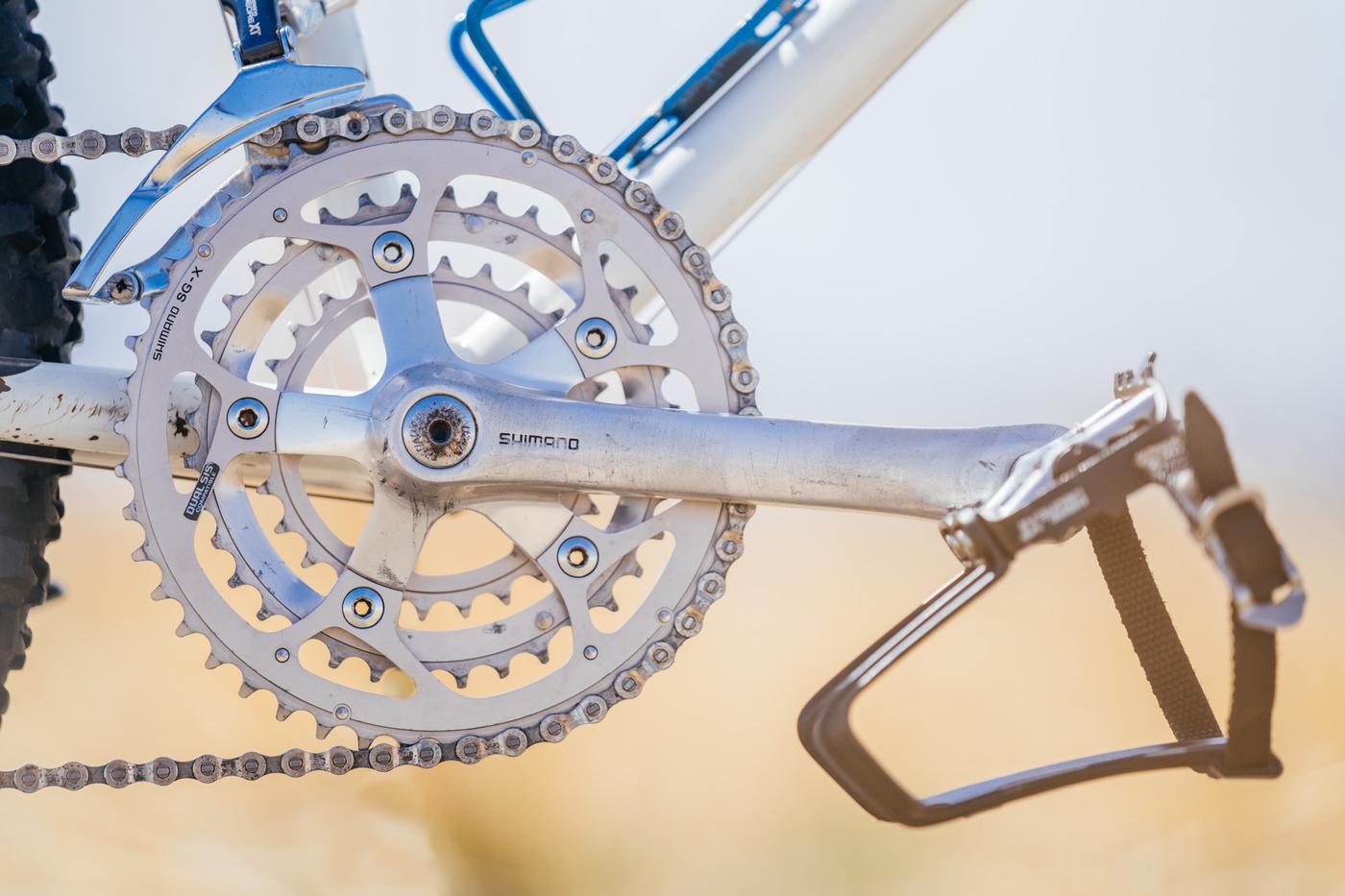 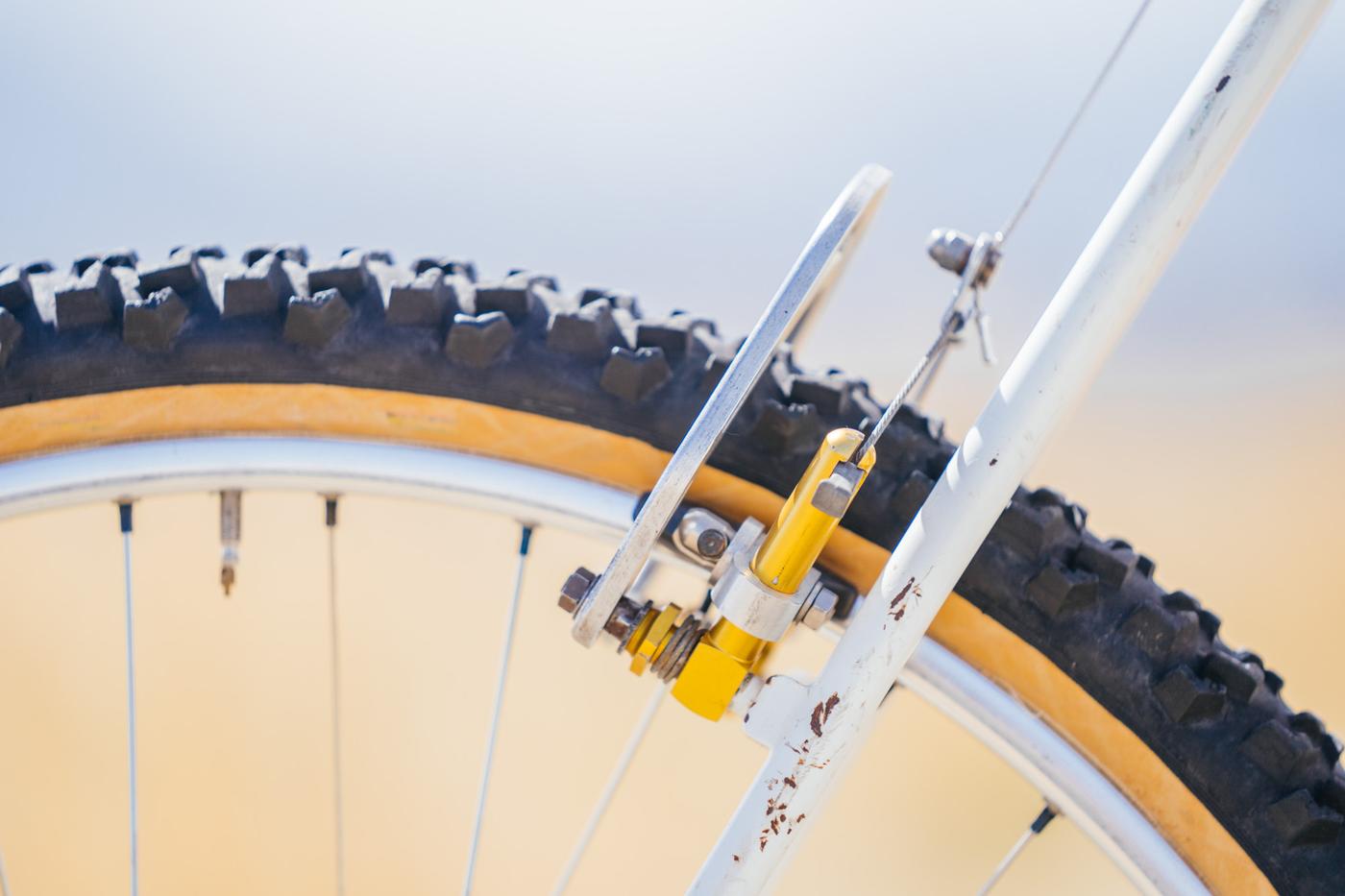 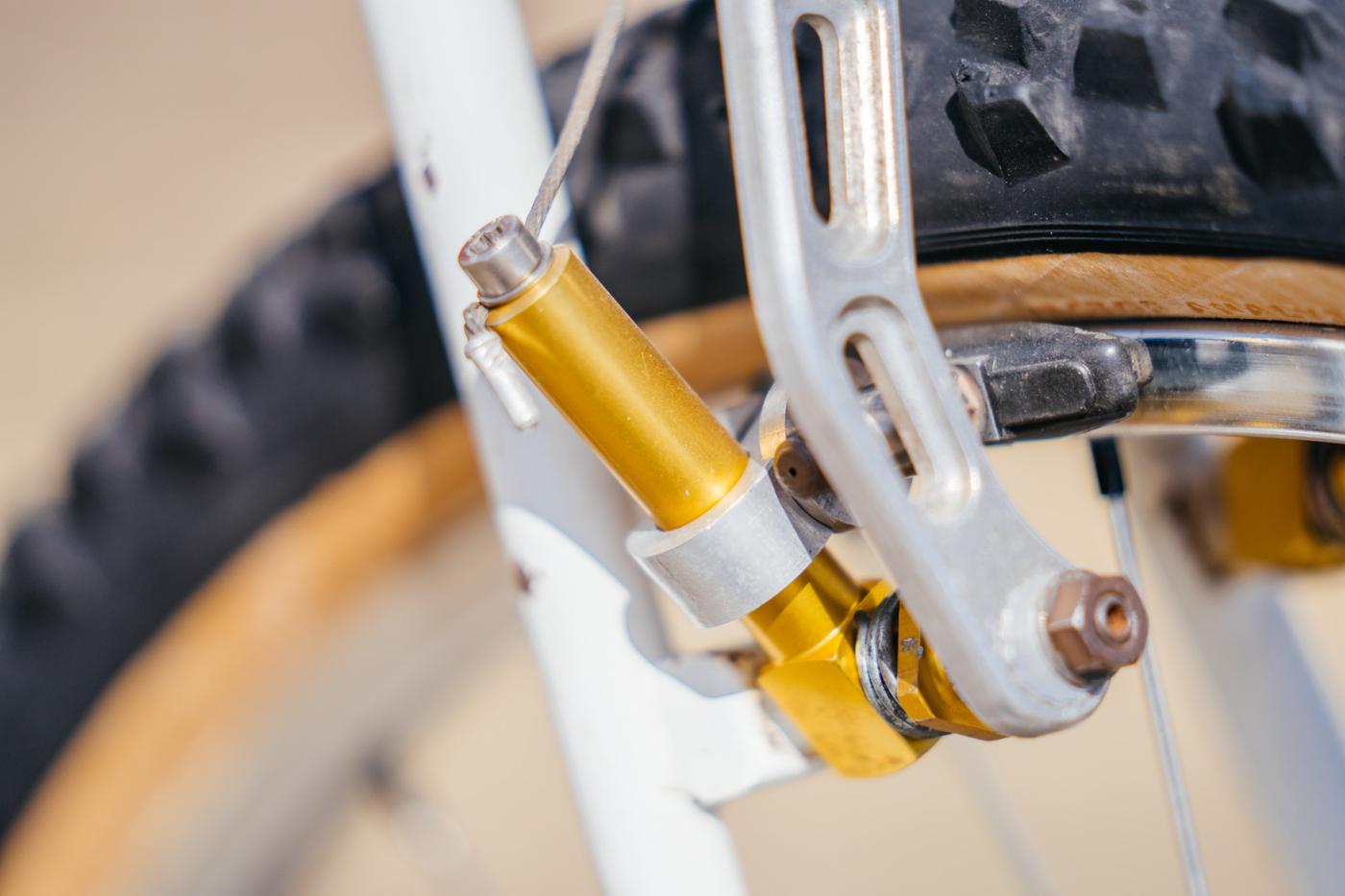 The components are an eclectic mix of Shimano, Suntour, and Specialized, spanning several model years. Prototype brakes from Paul Component Engineering grace the rear of the bike, and XTR M900 chainrings found their way onto the crankset at some later date. Ross’ preferred saddle, the bare plastic Cinelli Unicanitor, was used along with a Breeze-Angel Hite-Rite. The shoulder “portage” strap was made by Mike Pfotenhauer, the founder of Osprey Packs, just as he was getting started. 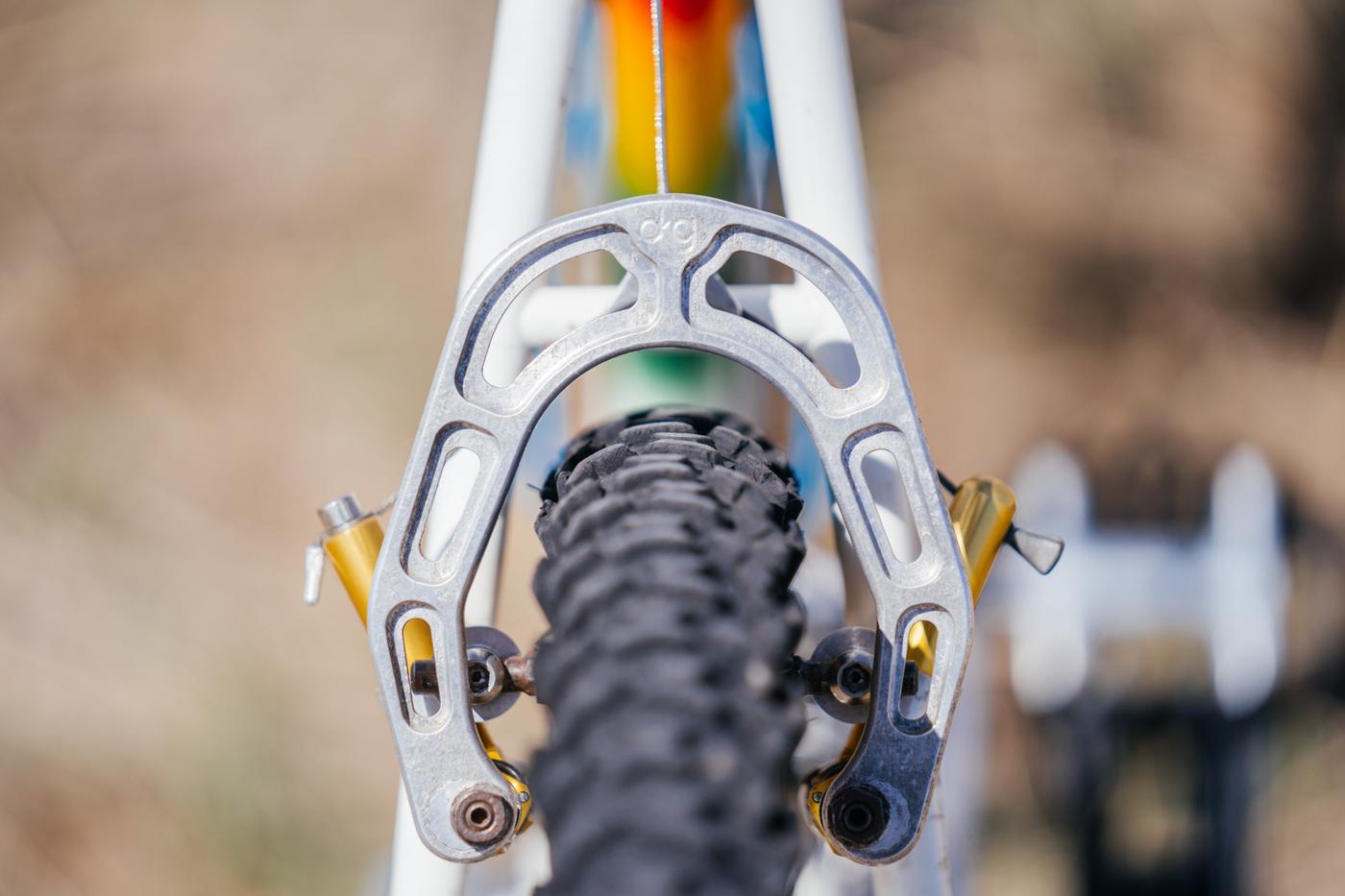 For rims, the hot ticket in the mid-80s was the Bontrager “cut down” in which the circumference of a 700c Super Champion or Mavic road rim was cleverly reduced and re-rolled into a 26” size. These narrow rims saved weight but also gave a rounded tire profile and opened the thread pattern. That said, the rear of the bike was designed to fit the small 1.7-inch version of the IRC X-1 Racer tire. In the front, the tire preferred by Ross was the big 2.125-inch version of the X-1 Racer. At some point it became difficult to keep sourcing the X-1 tires and Ross settled on the large volume Ritchey Z-Max 2.35 inch. Before front and rear specific tread patterns had been developed, it was common to use a small rear tire for pedaling efficiency and a large front tire for cornering traction and primitive suspension. The bike started out painted with a red oxide epoxy primer with a blue pearlescent clear coat, as seen on the original unicrown fork and stem. Later, the bike was repainted white with large Rasta stripes, consistent with the ska and reggae music that played often at the Petaluma frame shop. When it came time to paint the Salsa racing team bikes in the late 80s, Ross went with this same paint scheme to great effect. Topping it all off is spicy Salsa chili pepper bar tape. 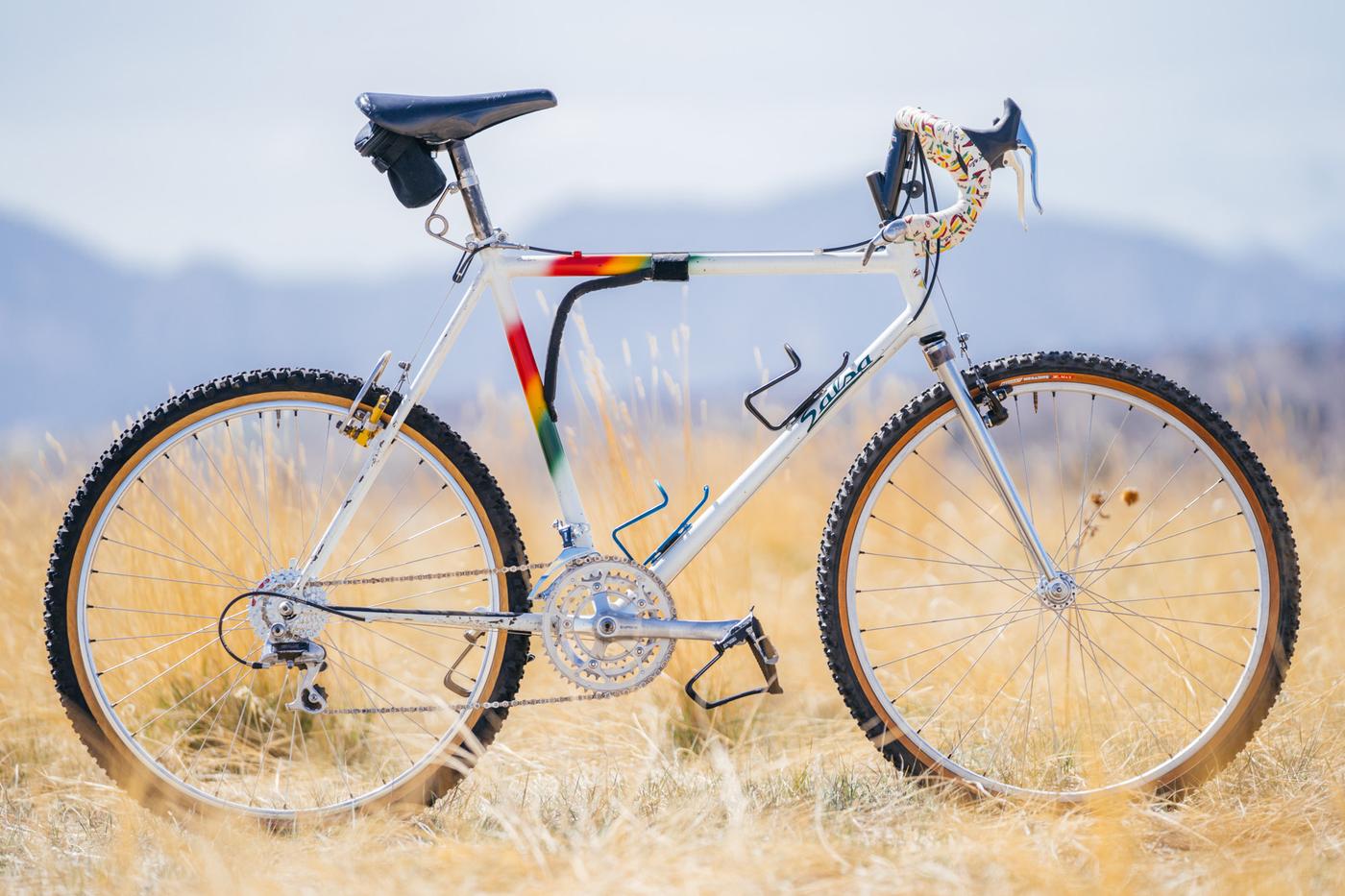 Although the last event the bike was entered in was The Alleycats Scramble in 1992, Ross would continue to use it well after as his primary mountain bike. As it rolls today, the bike represents a collective history of influential people, significant events, technology trends, cycling culture, and dedicated service.