Vintage mountain bikes have a special place in our hearts over here at The Radavist. From vintage klunkers to fillet-brazed beauts, it just seems like bikes from the early years of mountain biking were ahead of their time in a lot of ways. When the pandemic hit, I found myself browsing forums, eBay, and emailing collectors to build up some vintage rides. I was inundated with all the tech that was coming out, yet wasn’t available to consumers, and just felt like revisiting my passion for old bikes would reinvigorate my love of 26″ wheels and friction shifting. This Ritchey is the most recent of three bikes that I built up over the past few years in the pandemic and was by far the biggest undertaking for me. The process included painting some Tom Ritchey fillet Bullmoose bars to match and fixing some shoddy paint on the frame itself.

This bike needed a complete build kit, as I bought it as a frameset, so I spent a lot of time speccing the build while utilizing some of the NOS components I’ve been sitting on for a few years. The end product is something I’m truly proud of and Cari and I had a lot of fun with the photos here, so enjoy! In the late 1970s, Marin County was buzzing with the Repack crew, their “klunkers” and the birth of the mountain bike and while all that was happening, a young framebuilder by the name of Tom Ritchey began making bikes designed for off-road use. Tom first began making fillet brazed frames at the age of 15. We looked at one of those bikes in our Sea Otter coverage this year! As a senior in high school, Ritchey built between 200-250 frames and maintained that rate until 1980 when he went full time into mountain bike frame construction. 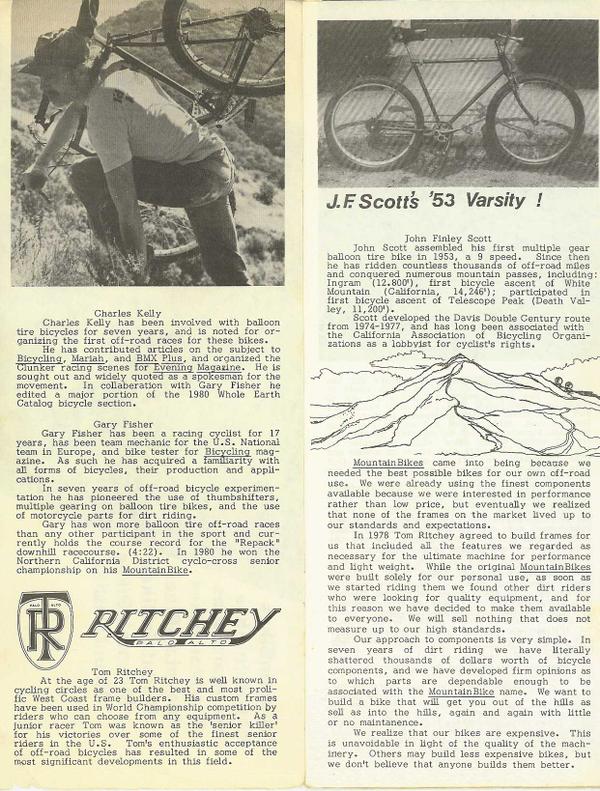 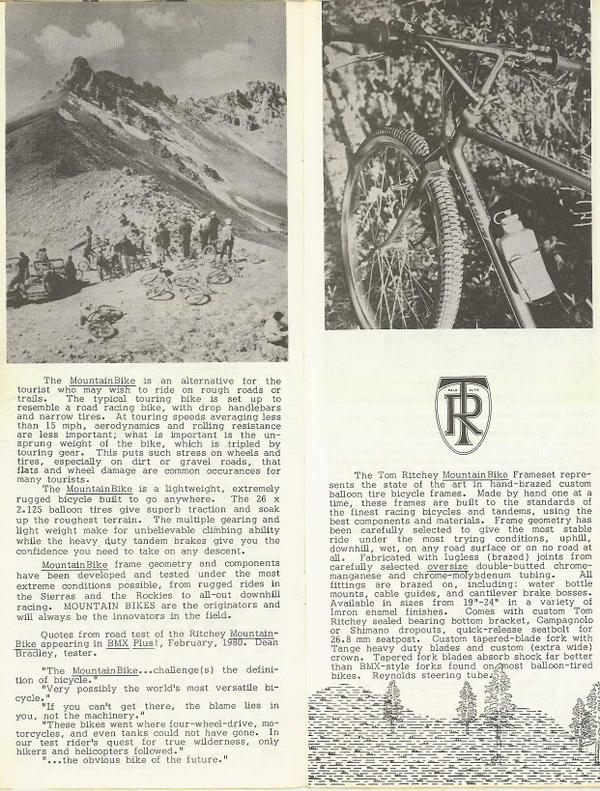 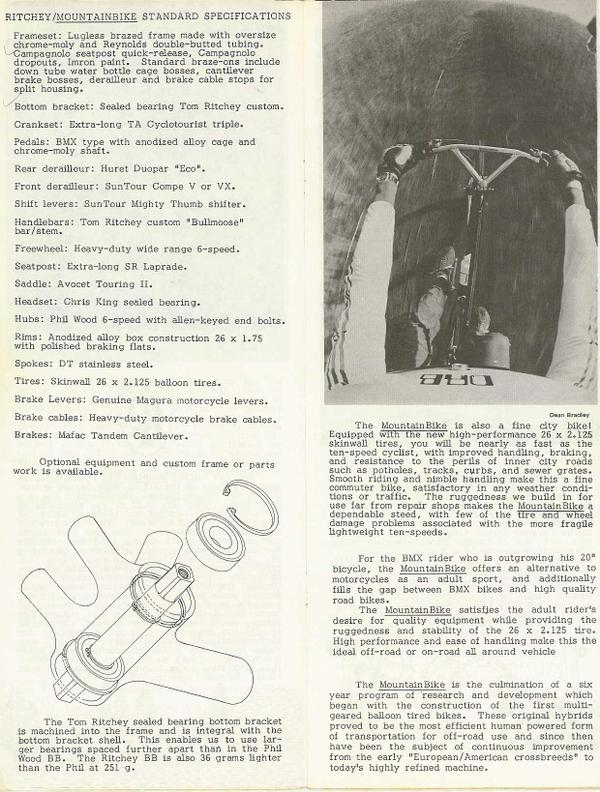 In 1979, Tom began building frames full time and he specced the frames with primarily French touring components like Mafac tandem brakes and TA cranks. Motorcycle levers from Magura were used, Suntour touring derailleurs, and BMX cruiser wheels and tires. Keep in mind that true-to-form mountain bike components didn’t come on the scene until 1983. 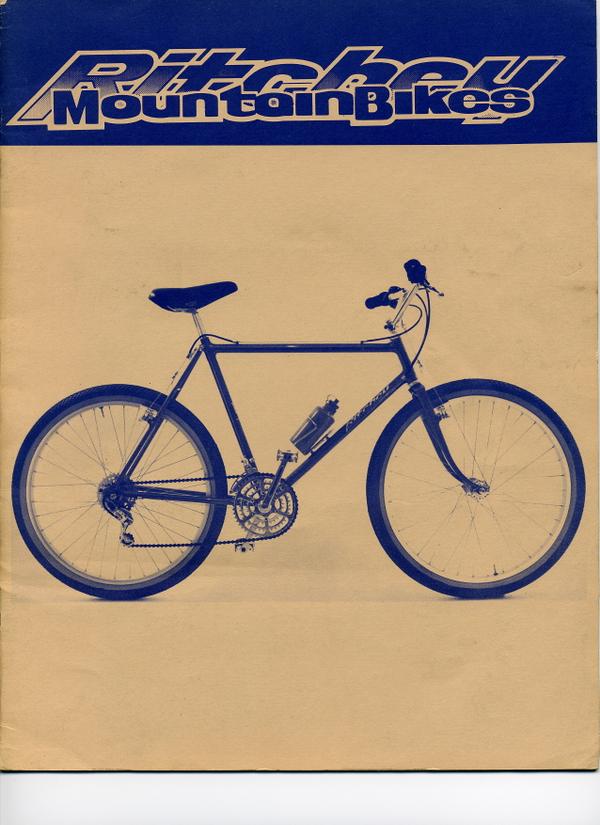 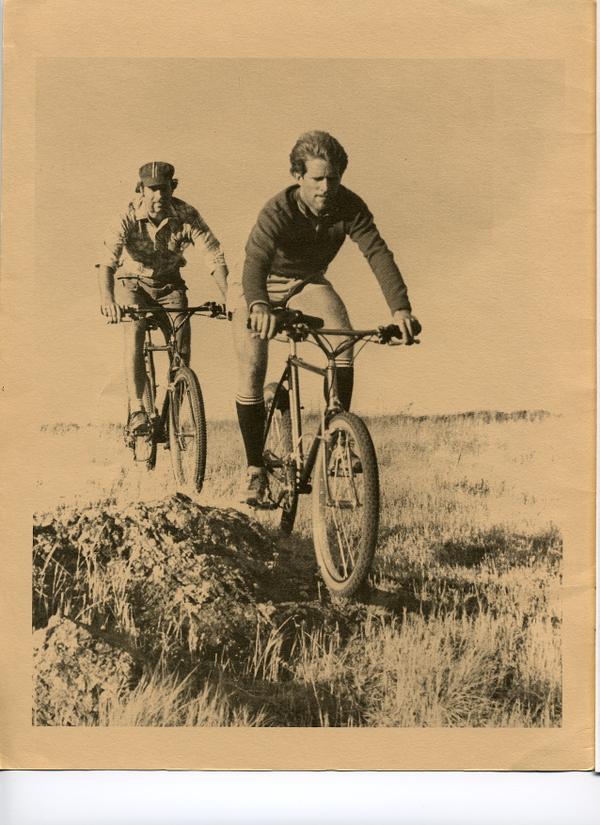 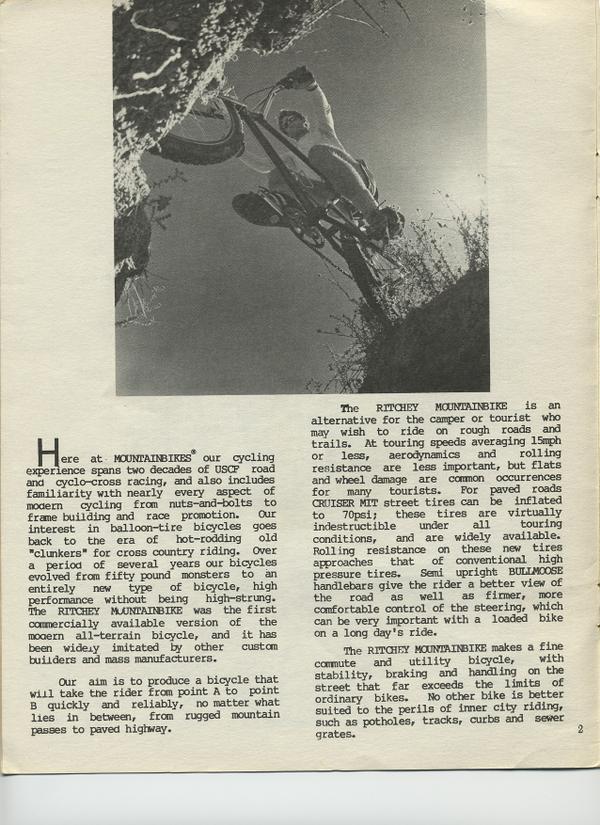 The early 80s brought about the first Ritchey production frames with “MountainBikes I” – or MBI, “A Bikes” – model landing in 1980 and “MountainBikes II”, or MBII, “B Bikes”, in 1981, which were more affordable framesets, sporting less-finished fillet work, and a non-machined head tube. In 1982, the Everest and Tamalpais were two of the flagship models offered, sporting a new decal on the downtube which read “Ritchey MountainBikes.” The Everest was akin to an MBI frame and the Tam, an MBII with much more affordable frame details.

In a story that is still repeated today, Specialized took note of Tom’s success and in 1981 they introduced the StumpJumper mountain bike. These bikes were reversed-engineered Ritchey frames after Mike Sinyard bought a frame from Tom and produced the frame in Asia to save money. It didn’t stop there. Tom and the entirety of the Marin County riders had spent years riding and testing components. They knew what worked and what didn’t and so Specialized copied their part spec for the first StumpJumpers. 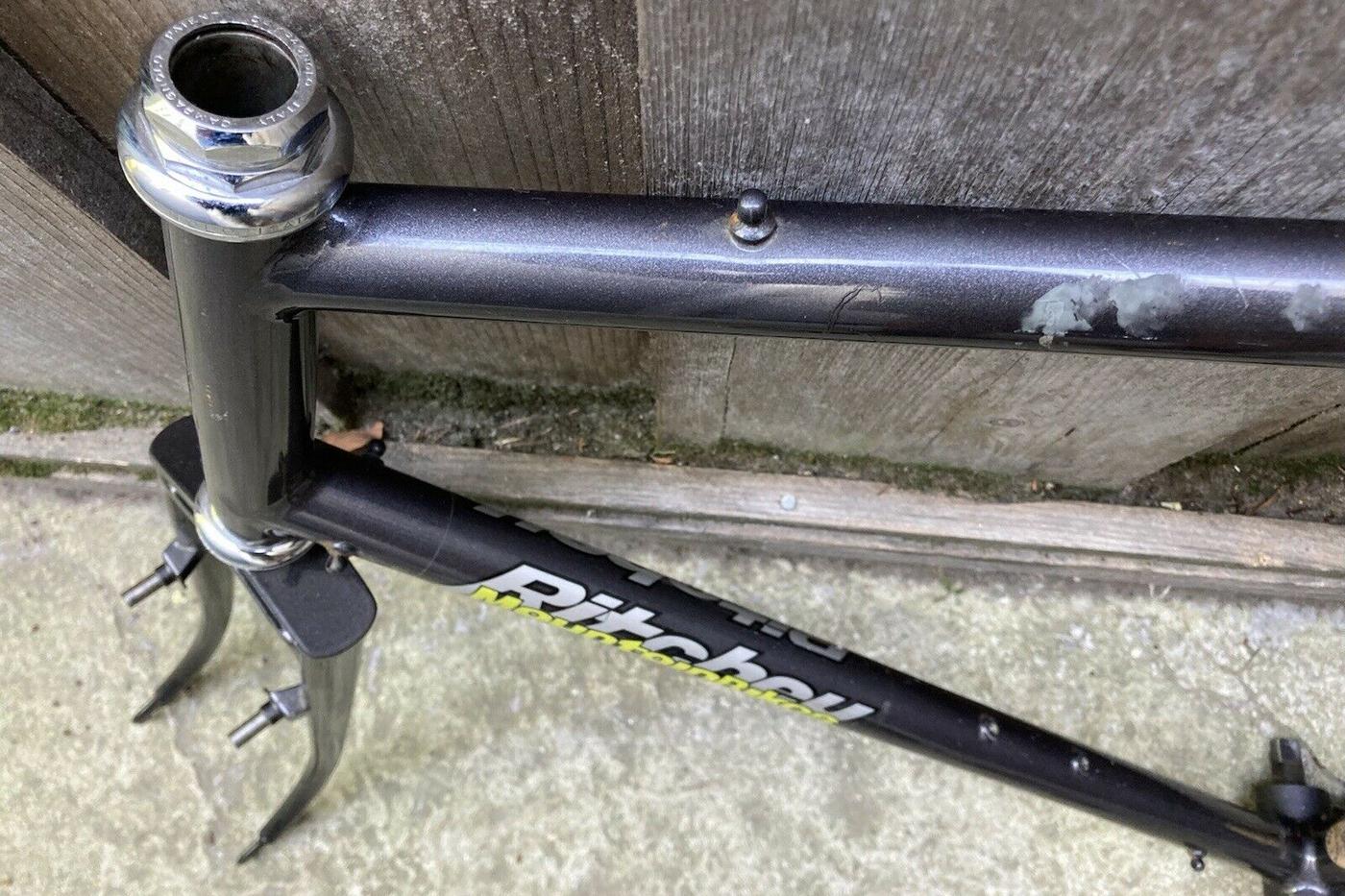 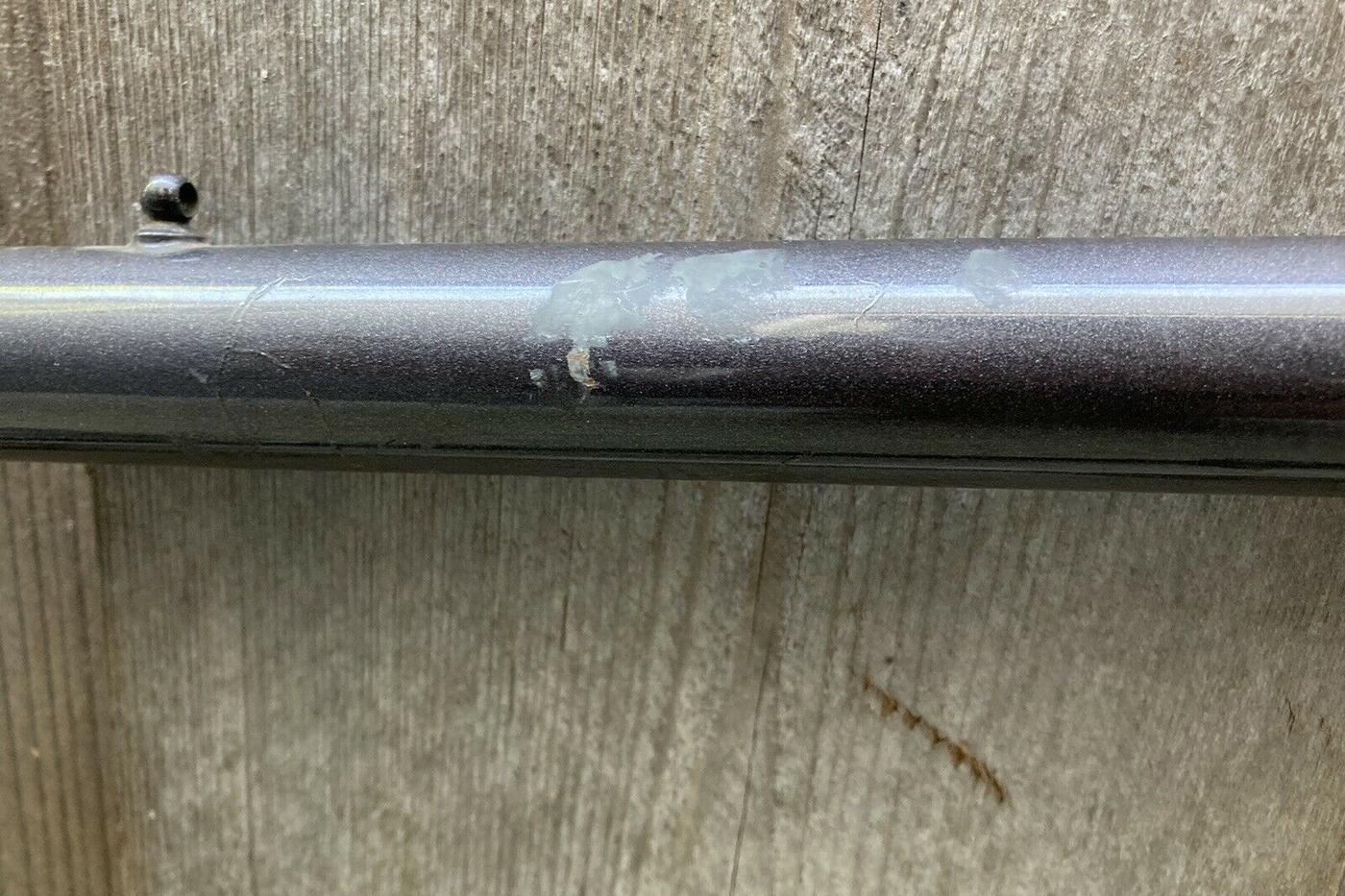 You never know what you’re gonna get when it comes to a 40-year-old frame and although it looked pretty ok in these photos, it was evident that it needed some TLC on the top tube, which meant I had to match the paint. After a few emails with Fergus at Ritchey (thanks dude!), we discussed Tom’s paint preference in the early days of his Mountain Bikes store. 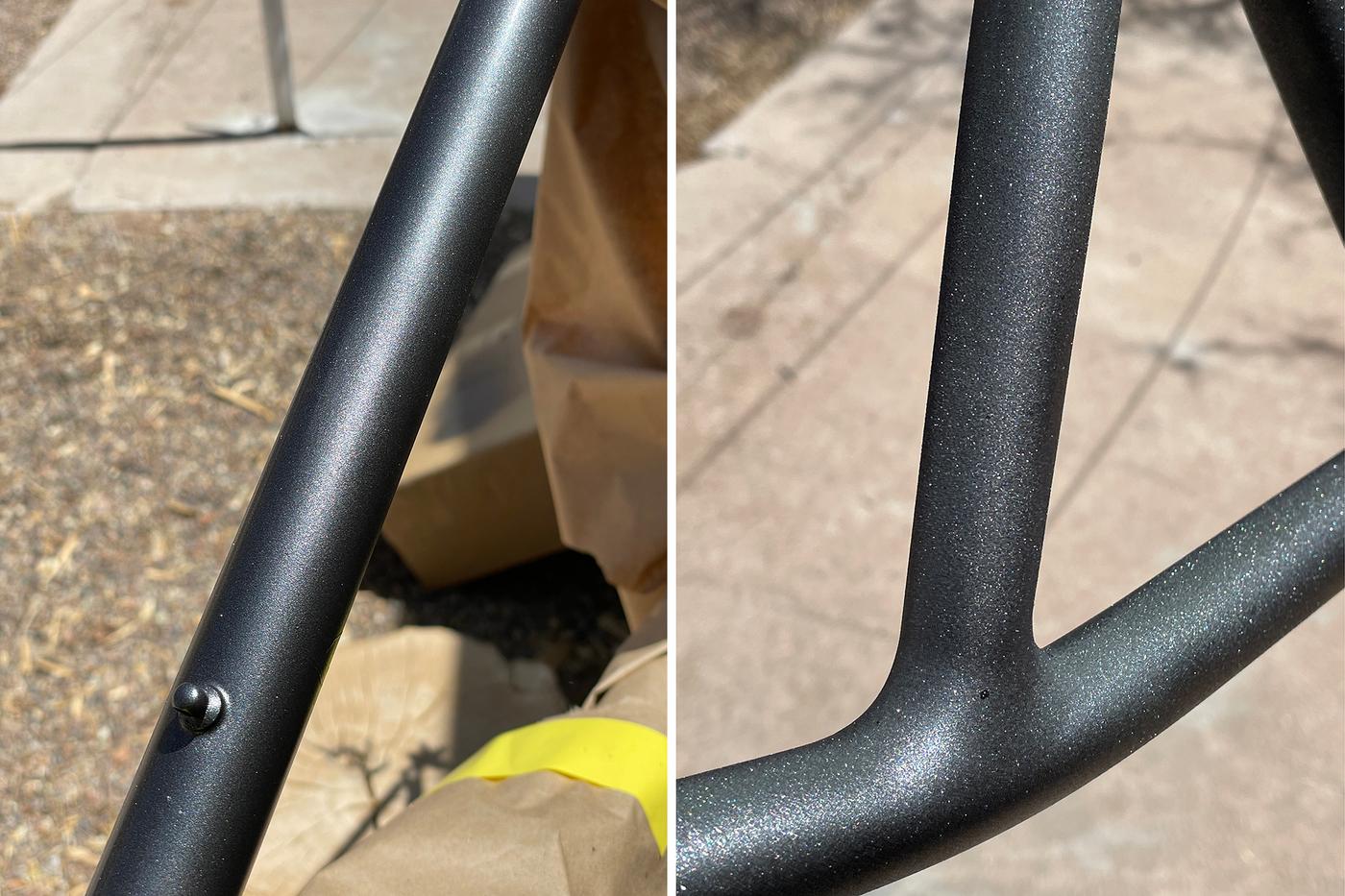 It seems that Tom painted his bikes with automotive paint that was in abundance. I took this frame to a local hot rod shop who was working on the exhaust on my Troopcarrier and they swore it was a late 1970s Ford pickup color. The painter handed me a can of touch-up paint, we sprayed a sample on some cardboard and it was pretty close. I got to work, masking off the trouble areas on the top tube, and began sanding down the paint with 400 grit sandpaper before hitting it with some etching primer and ten light coats of paint. It matched perfectly and after some clearcoat to protect the repair, the bike was ready to get built up. I did the same with some Bullmoose bars that I have had for a while. They were orange and in a really rare “low-rise” version. I sanded them down, primed them, and painted them to match. While neither the frame nor the bars are perfect, for the cost of two cans of paint from AutoZone, I can’t complain!

Next up was a bottom bracket refresh. This frameset came with the original press-fit bottom bracket. While the bearings felt ok, the spindle was too short for the TA Cyclotouriste cranks I was speccing it with. All I needed were a few more millimeters, so I called Dustin from Dust In the Wind Bicycle Repair. Dustin works at Phil Wood and after some back and forth, we determined the proper bearing size and spindle length I’d need to get crank clearance. Turns out, a 135mm spindle worked a treat, giving enough space for the bulky chainring bolts to clear the chainstay. It also widened the q-factor for those TA cranks out a bit as well.

What’s really cool about this whole process is Tom developed the press-fit system for his frames to save weight over a traditional Phil Wood bottom bracket. This design allowed for the bearings to be more outboard in the shell, resulting in a stronger and lighter design. Neat! 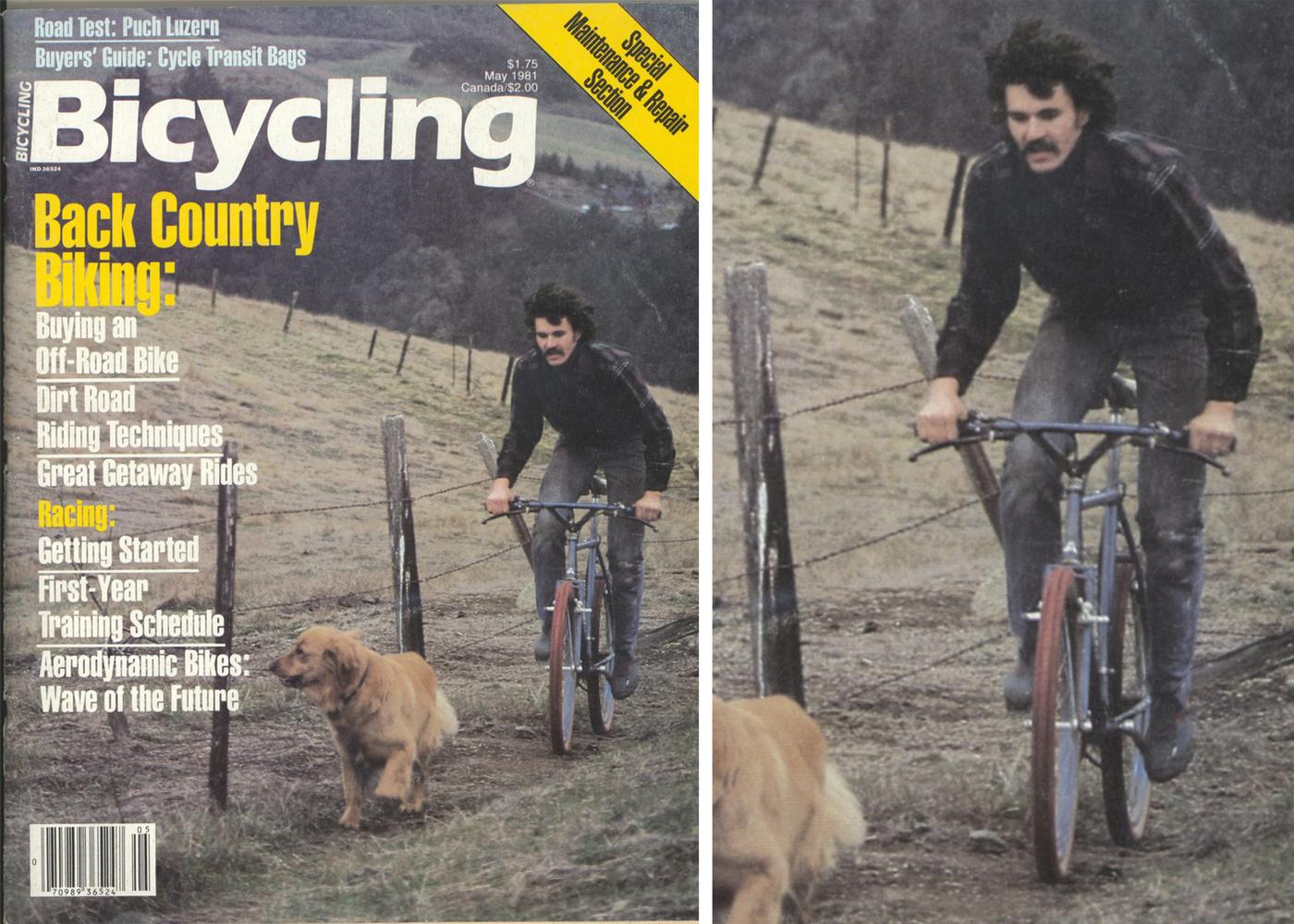 Around the time I was working on this, Ritchey posted this Bicycling Magazine cover of Tom on their Instagram on one of his first bikes, in the same color as this Tam frame, with red Snakebelly tires. I immediately broke out my Ultradynamico Mars tires and set the Deer Head and Araya rims up tubeless, using the same technique I posted about a few months ago… 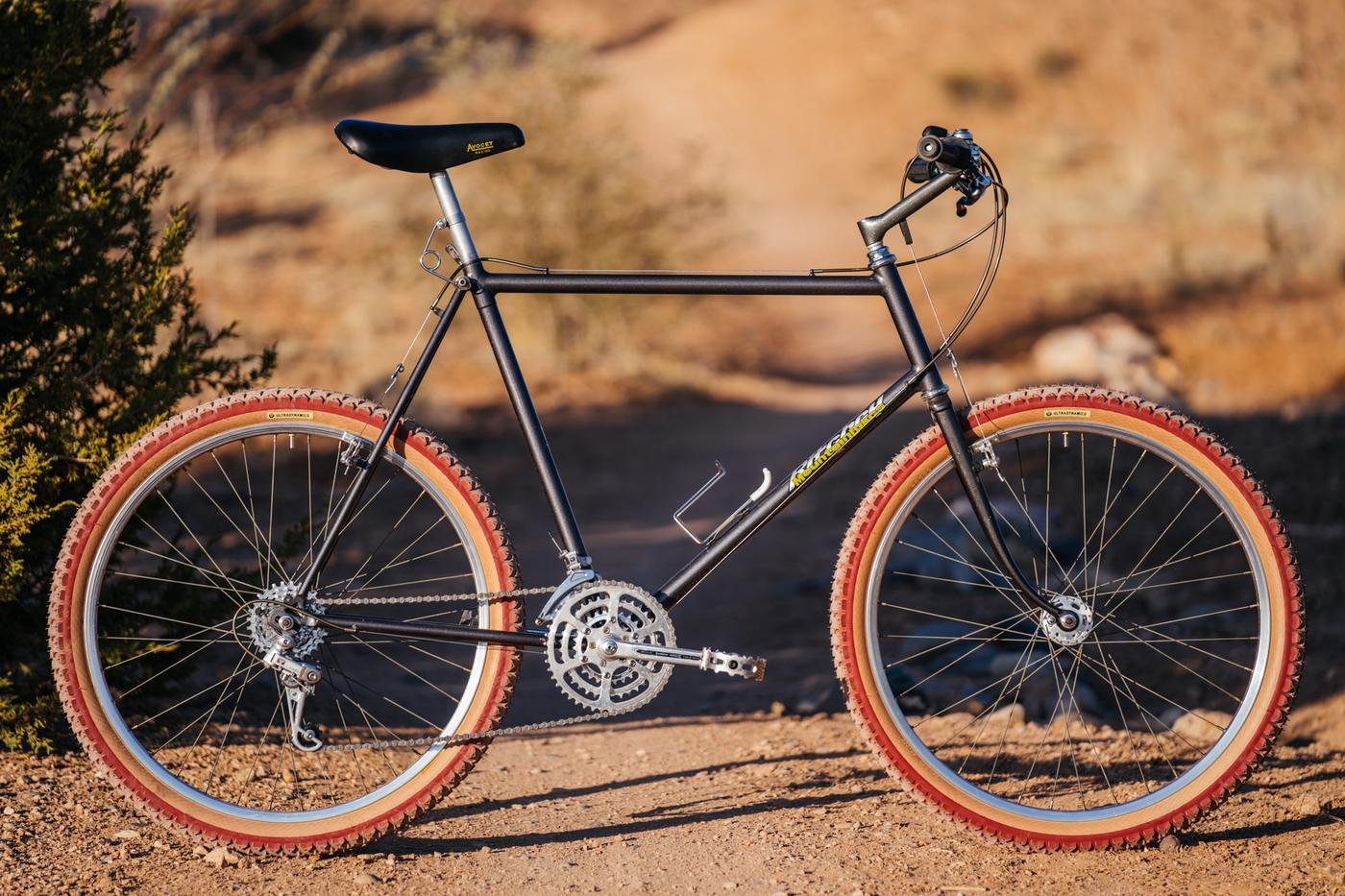 Geometrically Speaking and Riding the Tamalpais

With a 66º head angle and a 70º seat angle, the Tam is not too far off in terms of a modern XC bike. The slack front end of the early MBI and MBII frames stayed with Tom’s models in the early 80s and didn’t change until 1987 with the Super Comp, which was designed as a competition, aka race, frame.  The higher bottom bracket is a direct response to the 26″ wheels, long cranks, and pedal strike. The entire time riding the Tam, I kept having the sensation that I was nearing pedal strike but truthfully, I never clipped a pedal. 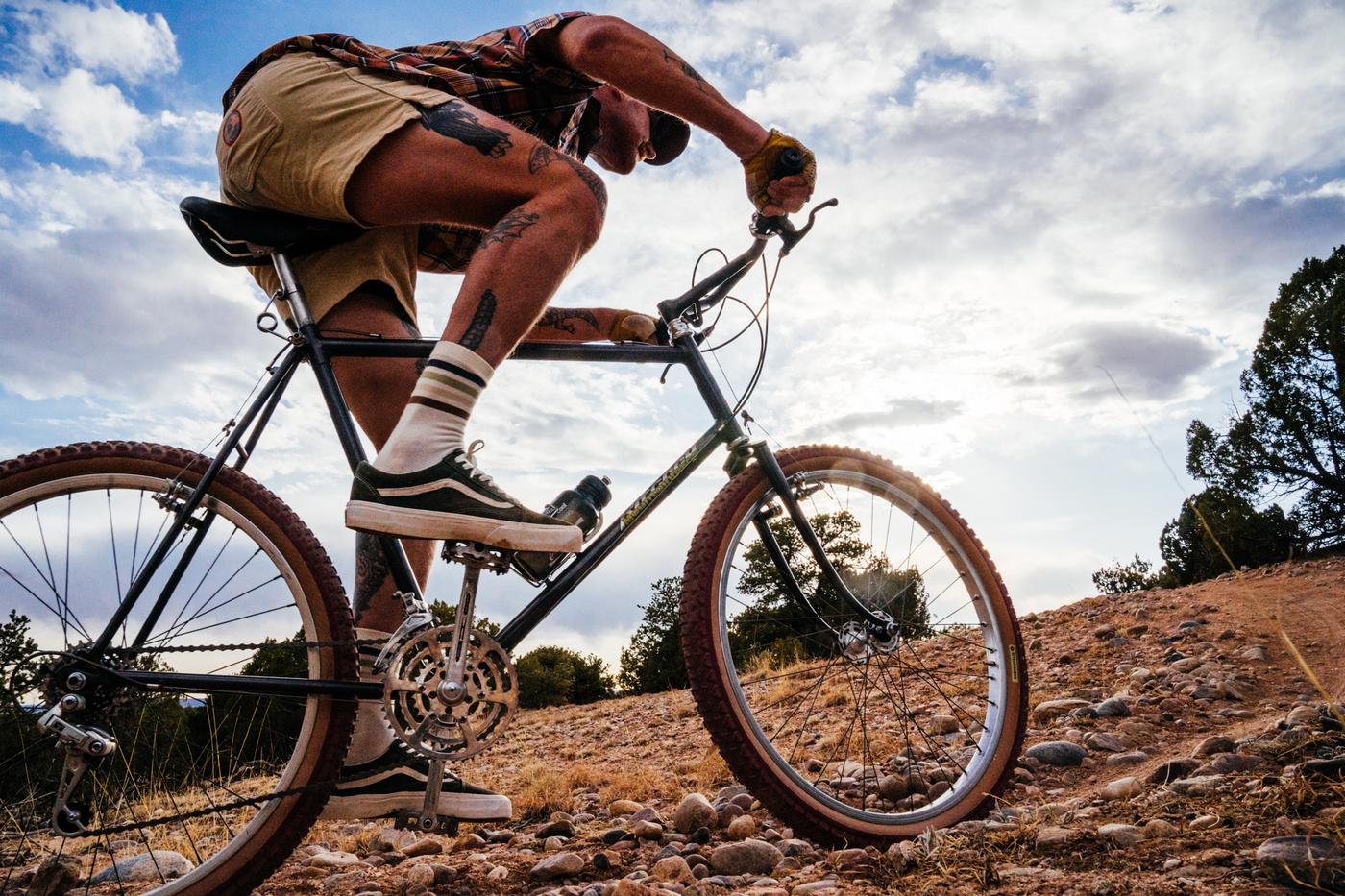 What’s most evident while pedaling the Tam uphill is the slacker seat tube and longer chainstays, which gives a sensation of falling off the back of the bike when compared to a modern, steep seat tube angle and tukt rear end. You really have to work to get closer to the bottom bracket of the Tam. Even on our XC trails, every pitch demands a shift in riding position to maintain your momentum. 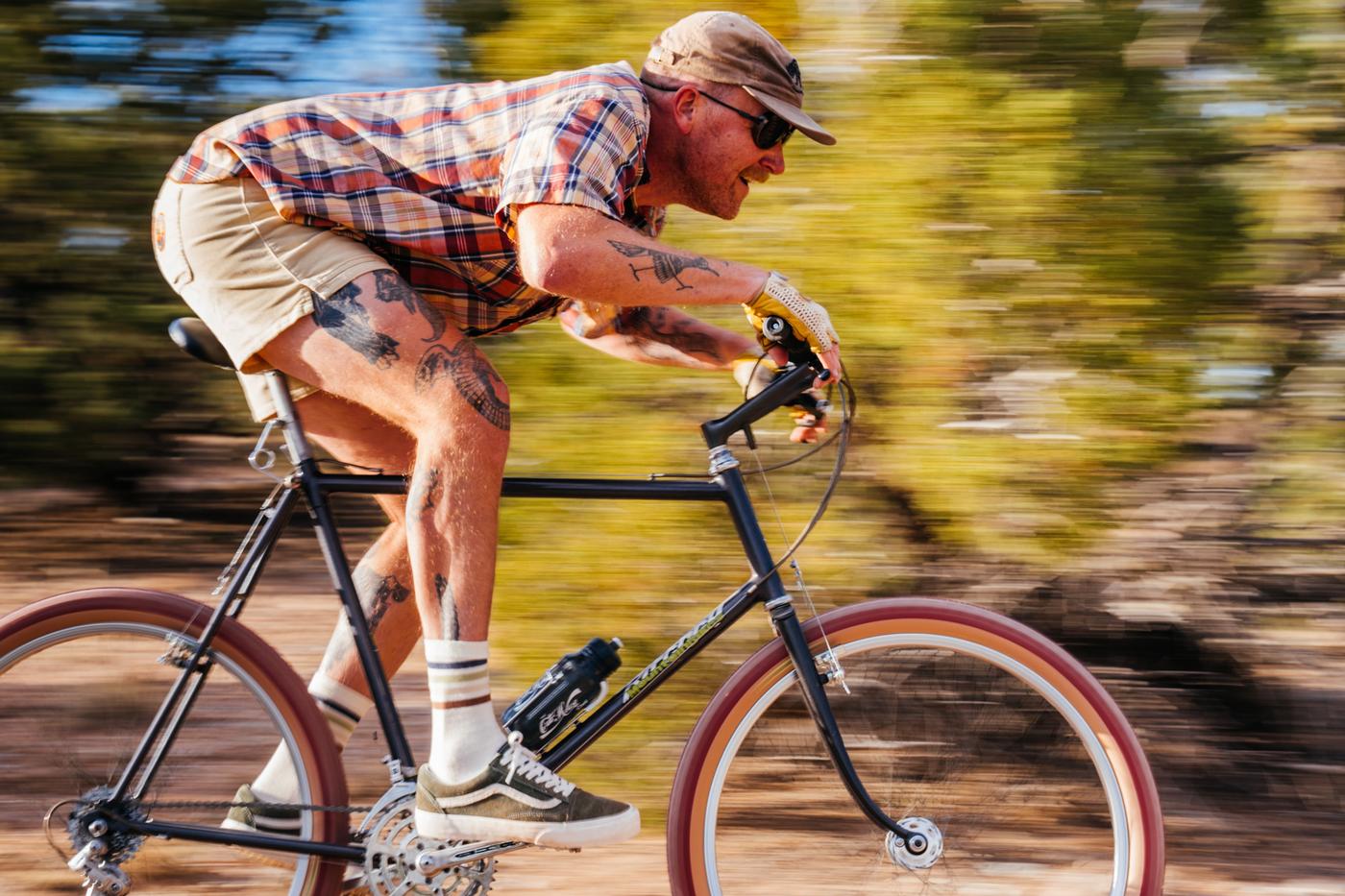 Yet, while descending, the slacker front end and elegant rake feel a lot like riding a randonneuring or touring bike on trails. The fork flexes, absorbing bumps and the bike tracks quite well at speed. Even with the long bullmoose stem, your hands are still well behind the front hub, firmly planting you on the trail. 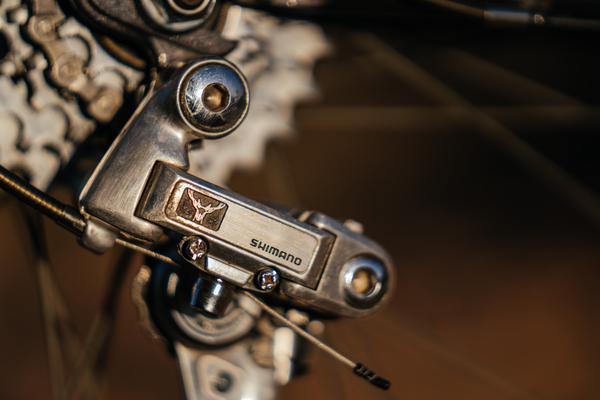 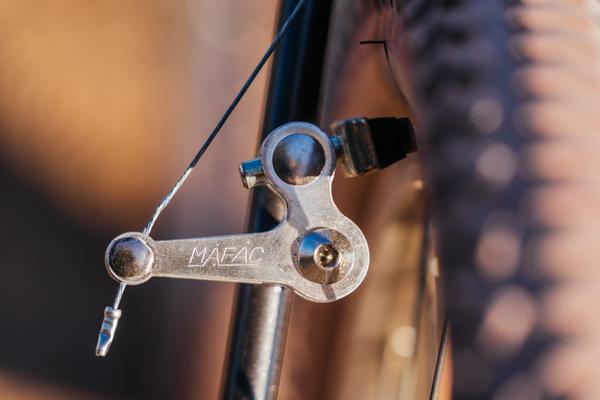 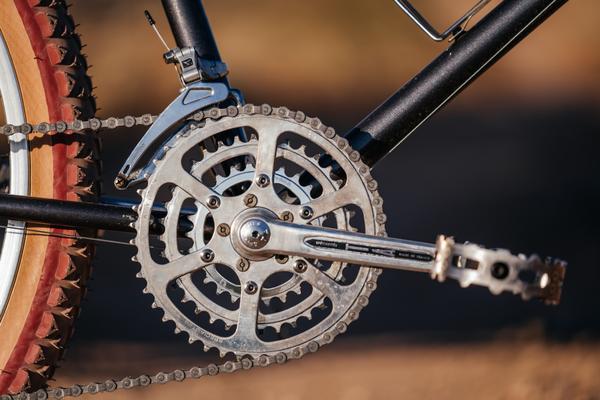 As previously mentioned, early mountain bike tech was derived from French randonneuring and touring bikes, with some moto and BMX cruiser influence. Tom selected some staple products from Mafac, TA, and Suntour on his early builds. This is where I took partial inspiration for this build. I had some NOS Mafac Tandem cantilever brakes and bought a set of TA Cyclotouriste cranks, which were the backbone for the build. In 1983, Shimano came out with Deore, which translates from Old English as “Dear Friend.” In a misunderstanding of the nuances of the English language, Shimano, who is based in Japan, took this to mean “Deer Friend”, which is why the first-gen Deore components have a picture of a deer’s head on it. I have had a set of NOS Deer Head components for a while now and was thrilled to finally give the shifters, derailleurs, and brake levers a home on this build. 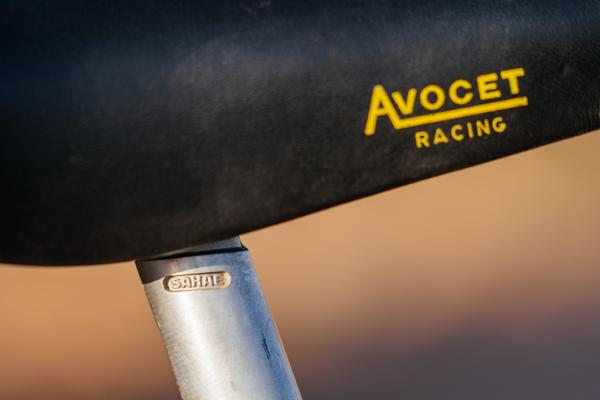 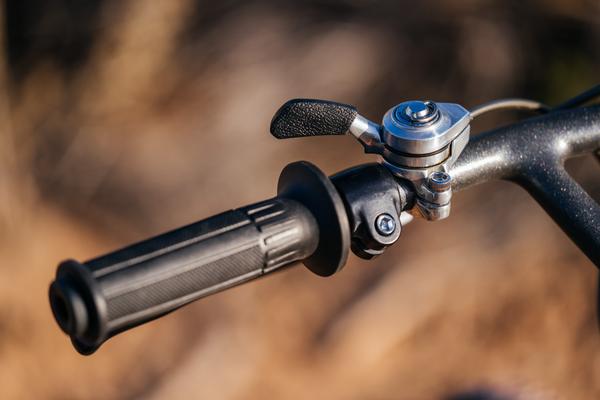 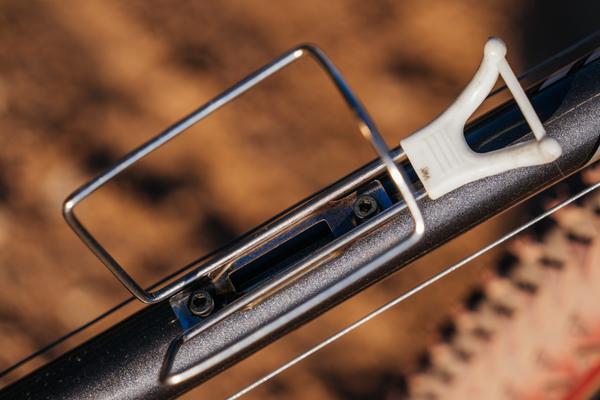 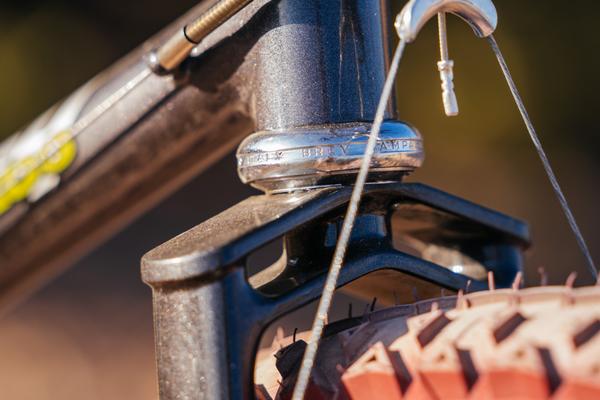 Other parts that rounded out the build were Deer Head hubs, Araya 1.75 rims, and Ultradynamico Mars tires (tubeless). When I build up a vintage mountain bike, I weigh both the history of the components and technology available at the time with the rideability of modern tires. I don’t want to mess with buying vintage tires that can exceed $300 for a pair with inner tubes in a land of goat head thorns and have found the Ultradynamico Mars tires to fit the bill. They look vintage, are nice and fat at 2.3″ and best of all, set up tubeless on a variety of vintage BMX cruiser rims. 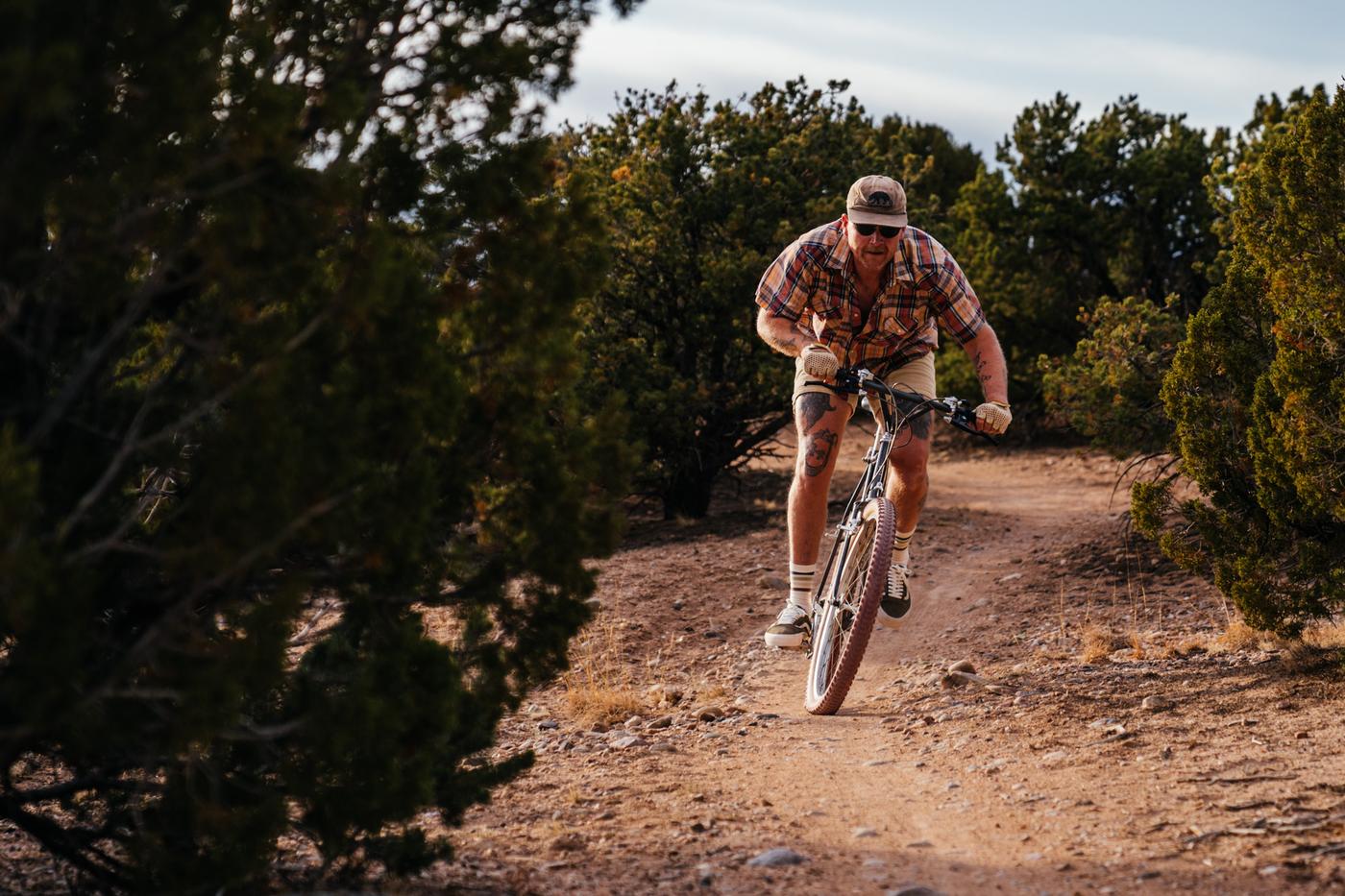 My first mountain bike was a rigid Gary Fisher I got from a yard sale in the late 90s and at the time, I had no idea of the rich history that came from Marin in the late 70s and early 80s. Mountain bikes have come a long way in that time and yet these vintage bikes are just as relevant as always. The same ol’ trails can get old real fast, especially in the time of a pandemic where many of us stuck to our local digs for two years. Over the past few years, I’ve built up a number of vintage bikes and this 1982 Ritchey Tam is the result of countless hours tinkering, reading, and talking with collectors. For me, the process is as addicting as the final product is rewarding. Vintage bikes ride so well and I’ve been having a blast in our local XC trails on this bike. While I have no plans to take on our more rocky trails, the Tam excels at cross-country rides including flowy singletrack and scenic doubletrack. Although maybe I’ll take the Tam to the Keyesville Classic next year! I’ve long been a fan of rigid mountain bikes and it’s been fun re-acquainting myself with rim brakes, 26″ wheels, and friction shifting. You can still shred these bikes, it just takes a different mindset.

If you have anything to add to this article or have your own stories to add, please do so in the comments where I’ll also do my best to answer your questions! Much love to Bailey at Sincere Cycles for always being willing to tinker with my weird projects. Thanks to the Vintage Bicycle Database for all these catalog scans! Thanks to Nick Martin, Martin Kozaczek, Fergus Tanaka, and Tasshi Dennis for all your help. Thanks to Cari for your patience with shooting these action photos!