We’ve all heard the term “Klunker” before, but as a modern misnomer in cycling, it’s been used to refer to coaster-brake actuated cruiser bikes. This, my friends, is a true-to-form klunker, using gears and brakes, but it was built upon a cruiser chassis. For today’s From The Pro’s Closet story, we have Tasshi from Vintage MTB Workshop sharing the story of Steve Cook’s personal Cook Brothers Racing Cruiser, so read on for all the nitty-gritty on what makes this wild bike so unique and how it would shape the future of mountain biking… 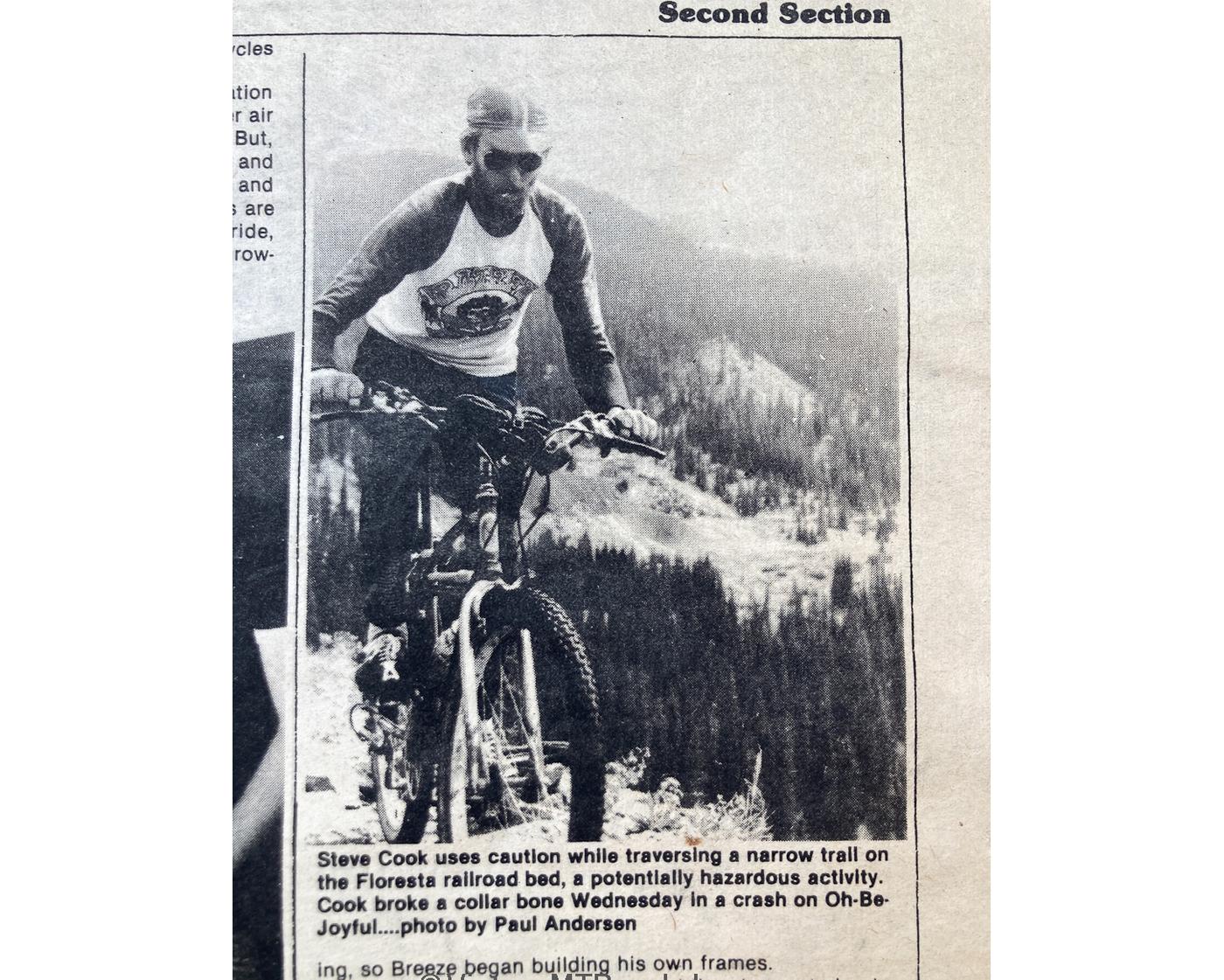 Steve riding his bike as it appeared in the Crested Butte Pilot, 1980. Paul Andersen photo

Who Was Steve Cook?

As an accomplished racer and trail pioneer, Steve Cook was inducted into the Mountain Bike Hall of Fame with the inaugural class in 1988.  Steve got his start with off-road riding in 1980 by assembling klunker bikes to explore the high passes around his town of Durango, Colorado.  Later that year, while visiting his brother Don Cook (Hall of Fame class of 1989) in Crested Butte, Colorado, he would buy a 26-inch wheeled BMX cruiser frame and fork from the Bicycles Etc. a shop run by Neil Murdoch.  As it would turn out, Murdoch was the fugitive Richard Bannister and became an inaugural inductee of the Hall of Fame for organizing events like Fat Tire Bike Week, which made the small ski town an early mountain bike mecca. 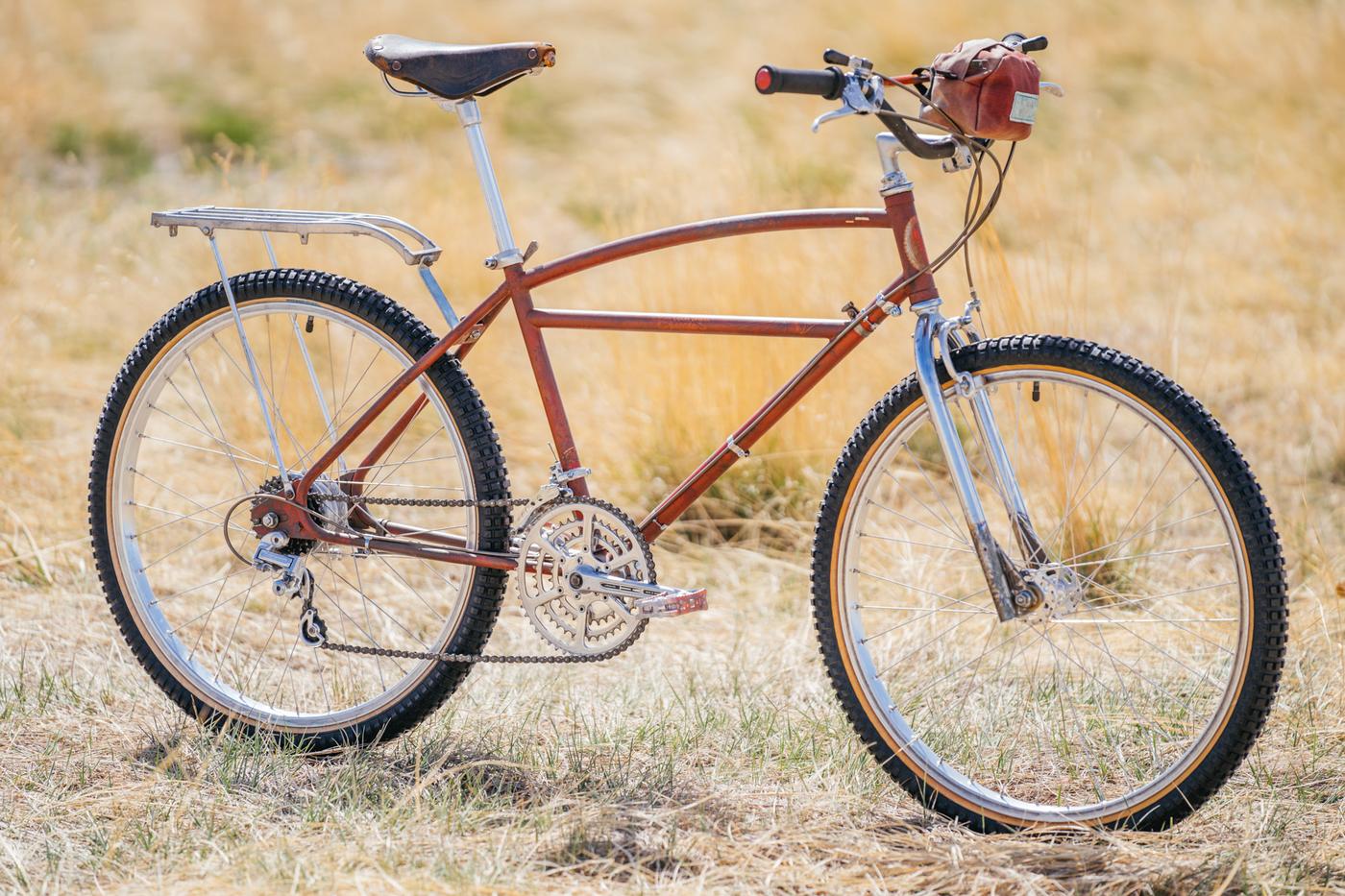 Here is the cruiser frame that Steve bought, a 1980 Cook Brothers Racing cruiser made by Craig and Gary Cook of Santa Ana, CA, with no family relation to Steve and Don.  At the time, these single-speed frames were a budget way for off-road enthusiasts to assemble their mountain bikes.  The frames and forks were made of Chromoly steel and far stronger than the klunkers made from pre-World War II paperboy bikes like the Schwinn Excelsior. 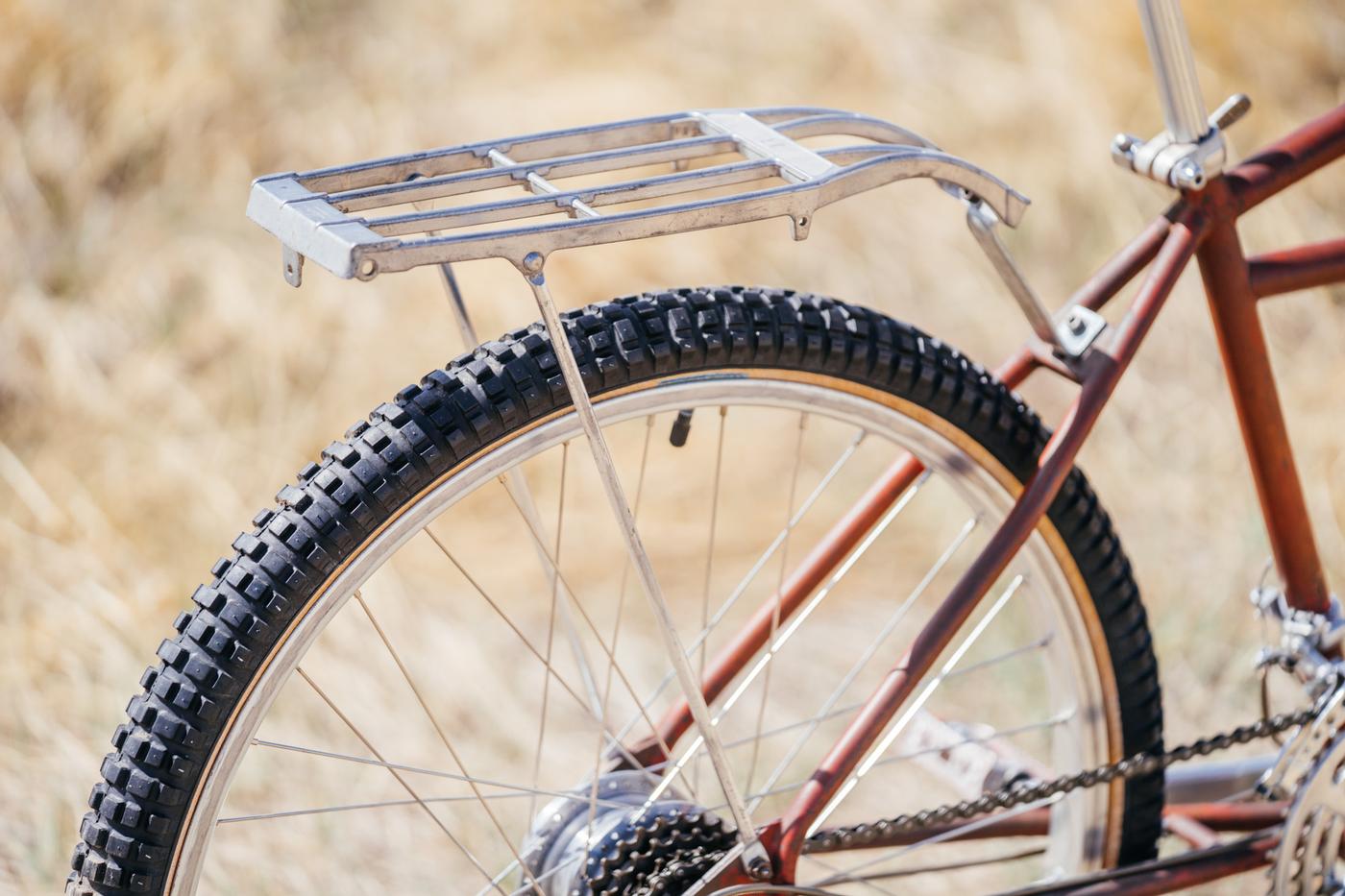 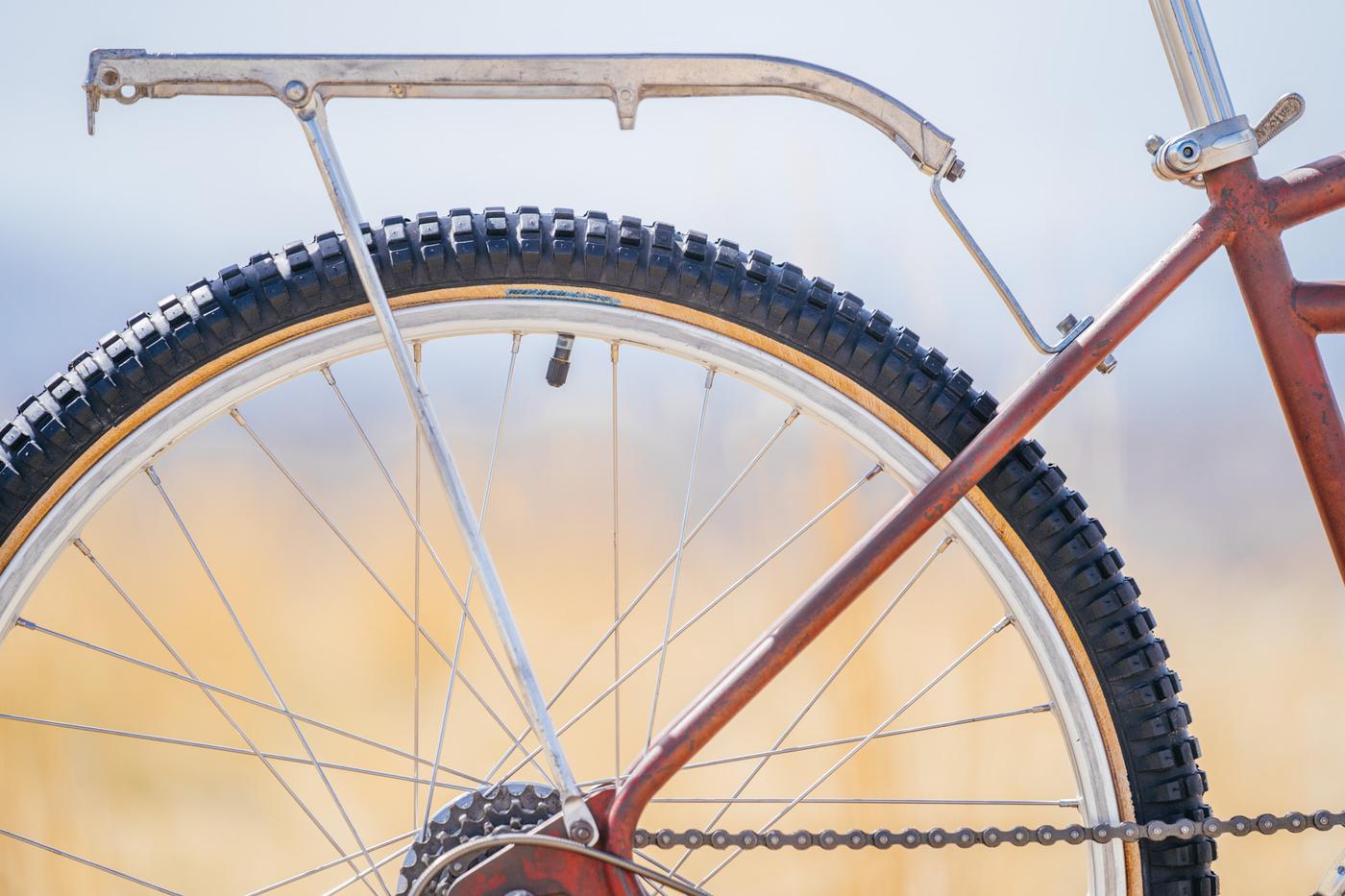 The geometry was more stable than a road or touring bike and designed to handle rough terrain.  The frames were designed with sufficient clearance for big tires such as the Uniroyal Nobby or the Cycle Pro Snake Belly.  Finally, the frames were substantially less expensive than the few purpose-built mountain bike options at the time, such as the Breezer and Ritchey MountainBikes. 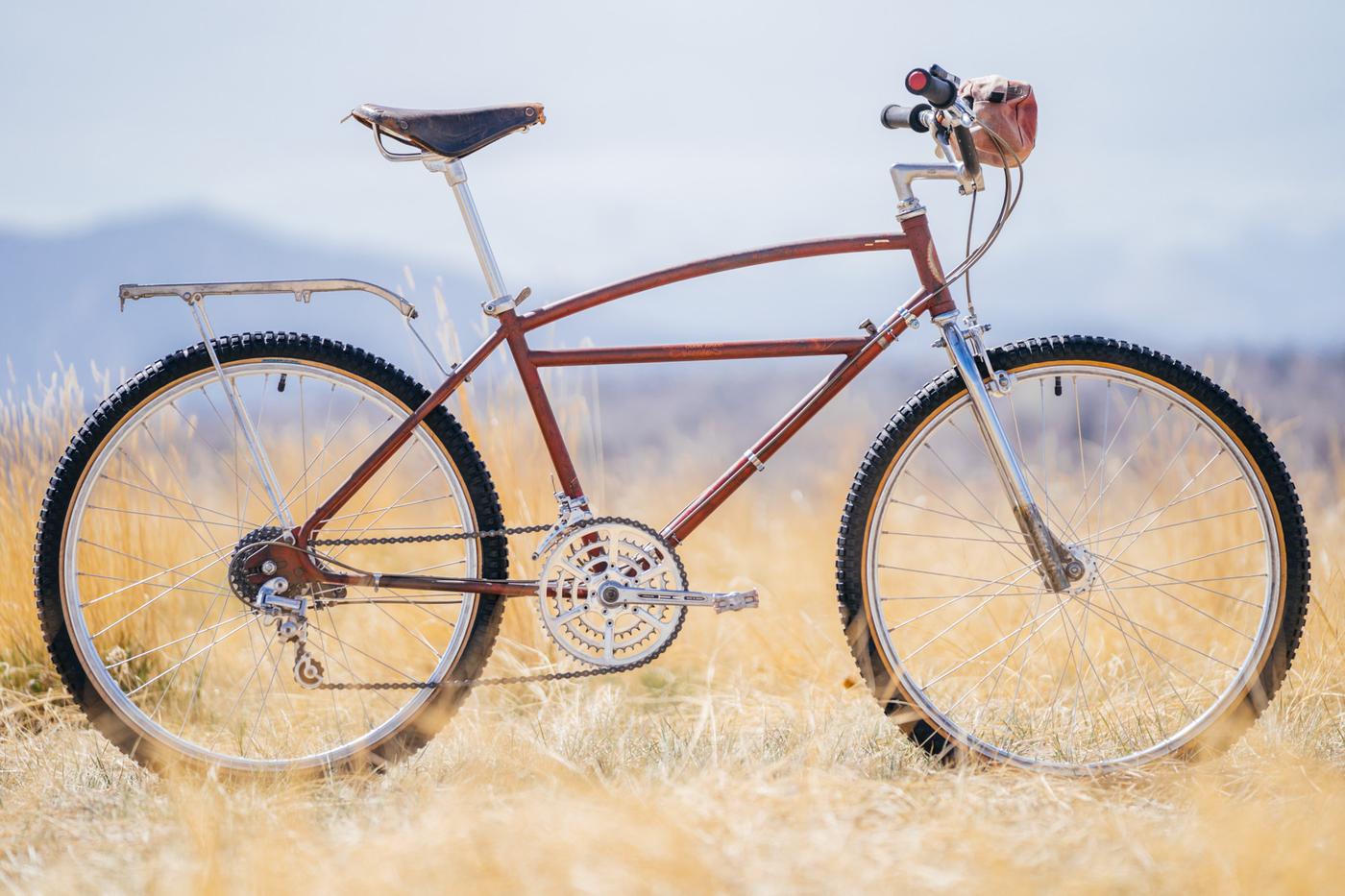 Steve took his purchase back to Durango, where a friend welded up stiffener plates to the dropouts of the Laguna fork and attached a rear derailleur hanger.  Steve also fashioned steel plates to stiffen up the rear dropouts to prevent them from flexing and breaking the axles of French Atom drum brake hubs.  Because many of these hubs were designed for very thick 12-gauge spokes, nipple washers or a new set of holes would be alternately drilled into the flanges to anchor lighter spokes.  In rebuilding this bike with an Atom hub, the approach of drilling new holes was applied. 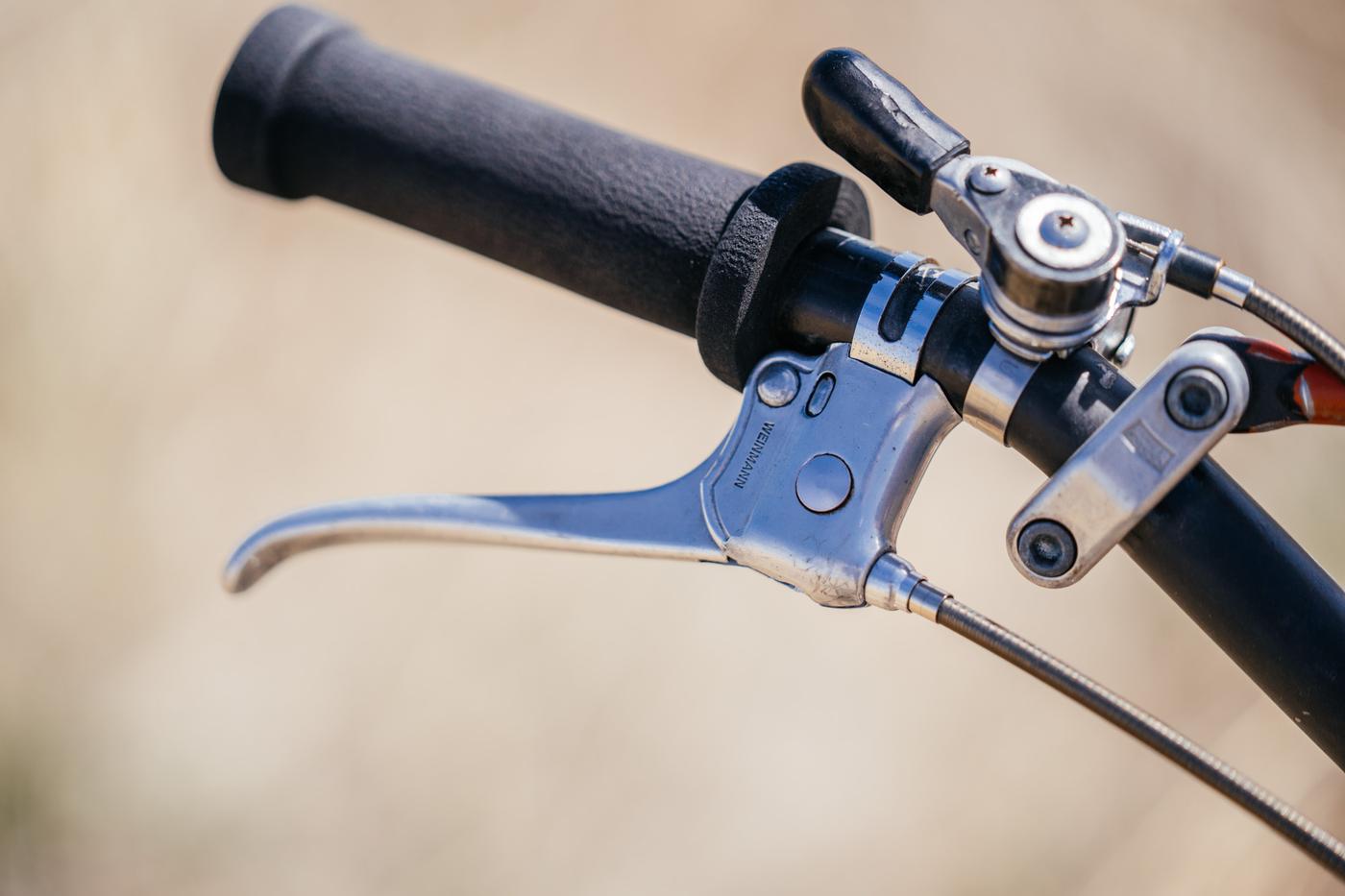 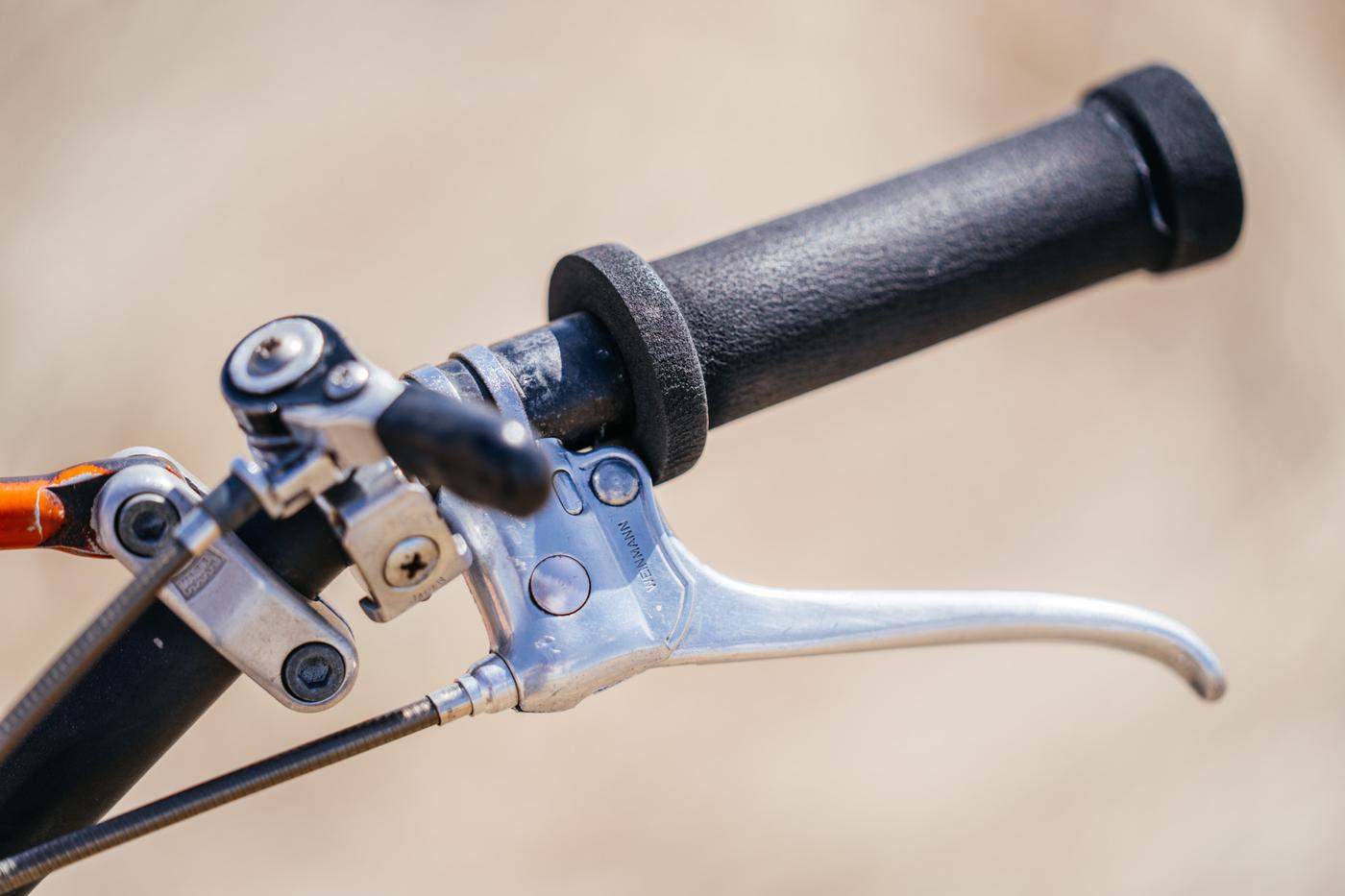 As a super strong rider, Steve set up the bike with a Spécialités T.A. Cyclotouriste triple crankset having the 30, 40, and 52 tooth chainrings of a touring road bike.  As was standard, Magura riser handlebars with a cross brace for off-road motorcycles were used and shimmed to an SR road stem.  Ratcheting Suntour Mighty thumb shifters designed for beach cruisers and upright touring bikes were the highly preferred actuation option.  To round out the braking, an almost entirely ineffective caliper brake from Weinmann graced the front of the bike.  Since the frames were not intended to be used with derailleurs, a plethora of clamps and zip-ties were used the attach the cable housing to the frame. 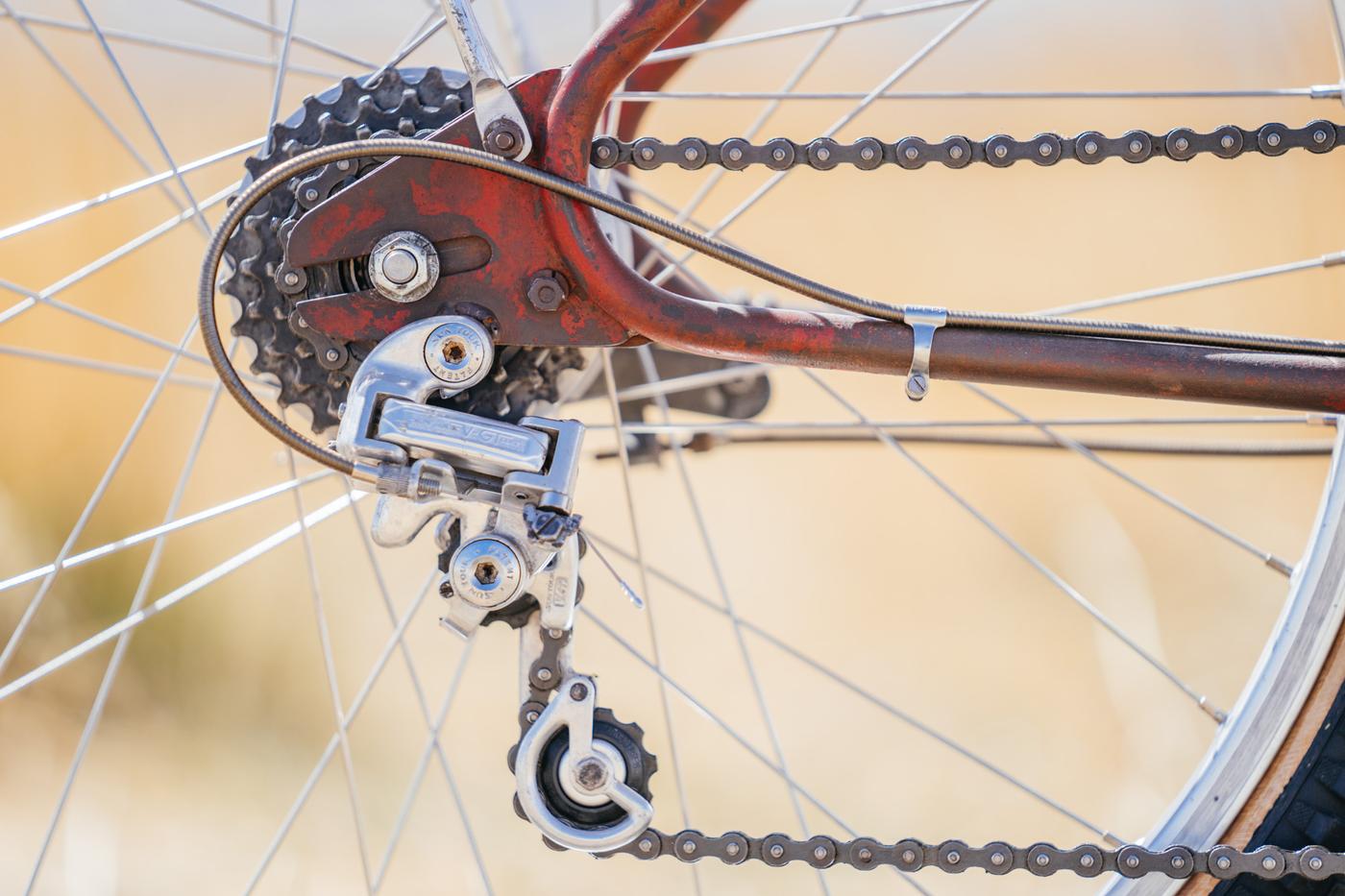 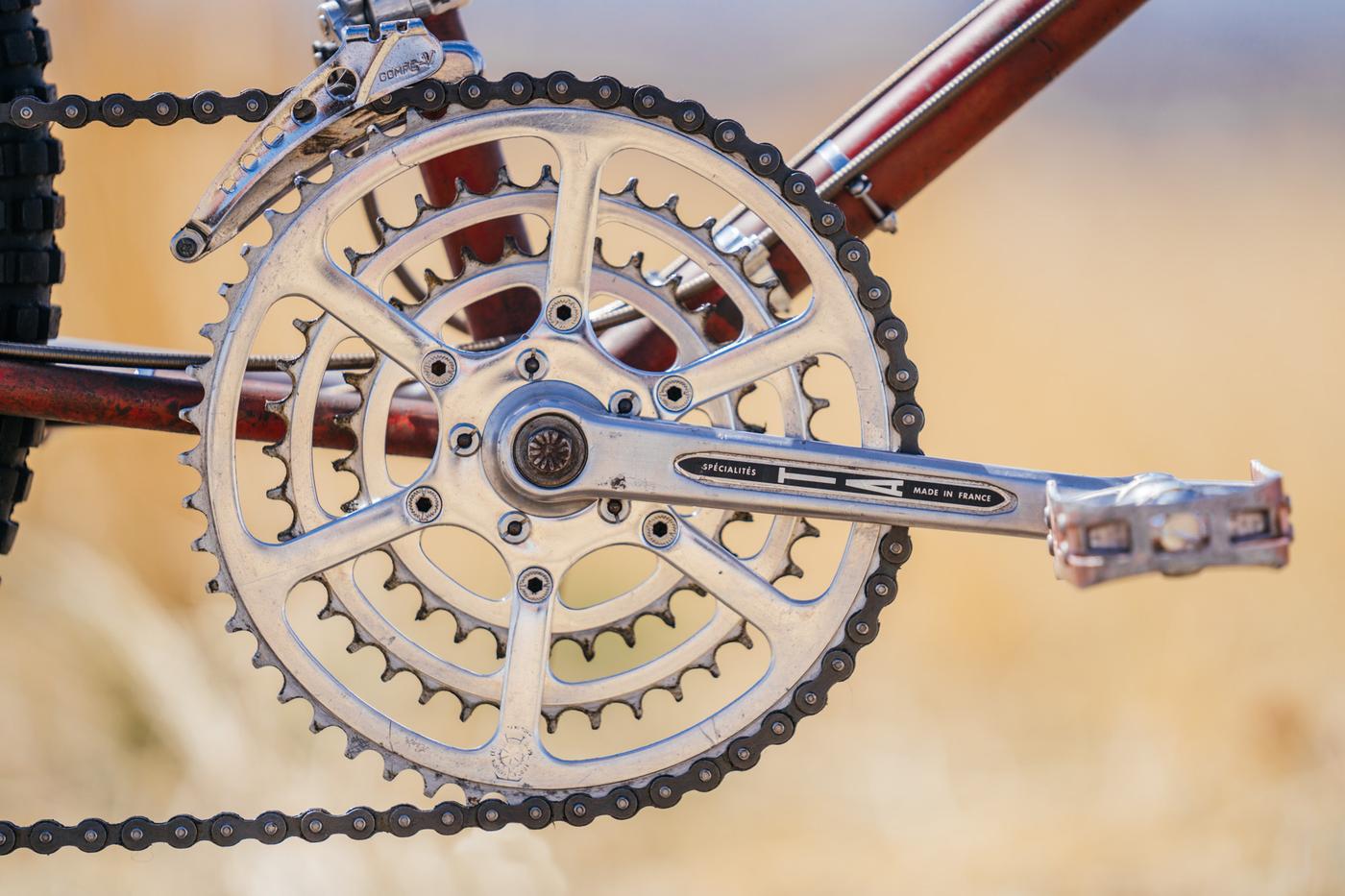 Steve used this bike to explore the trails around Durango and Crested Butte, where he would later settle and set up his bicycle shop.  His bike can be identified in several historic photos presented here.  In a photo taken by publisher Charles Kelly, Steve is seen on this bike (far right) at the Crested Butte ski area with brother Don in the middle and fellow Hall of Famer Mike Rust on the left.  Even from this frontal view, the similar approach to setting up a klunker mountain bike at the time is evident, adapting parts from motorcycles, BMX, and road touring bikes. 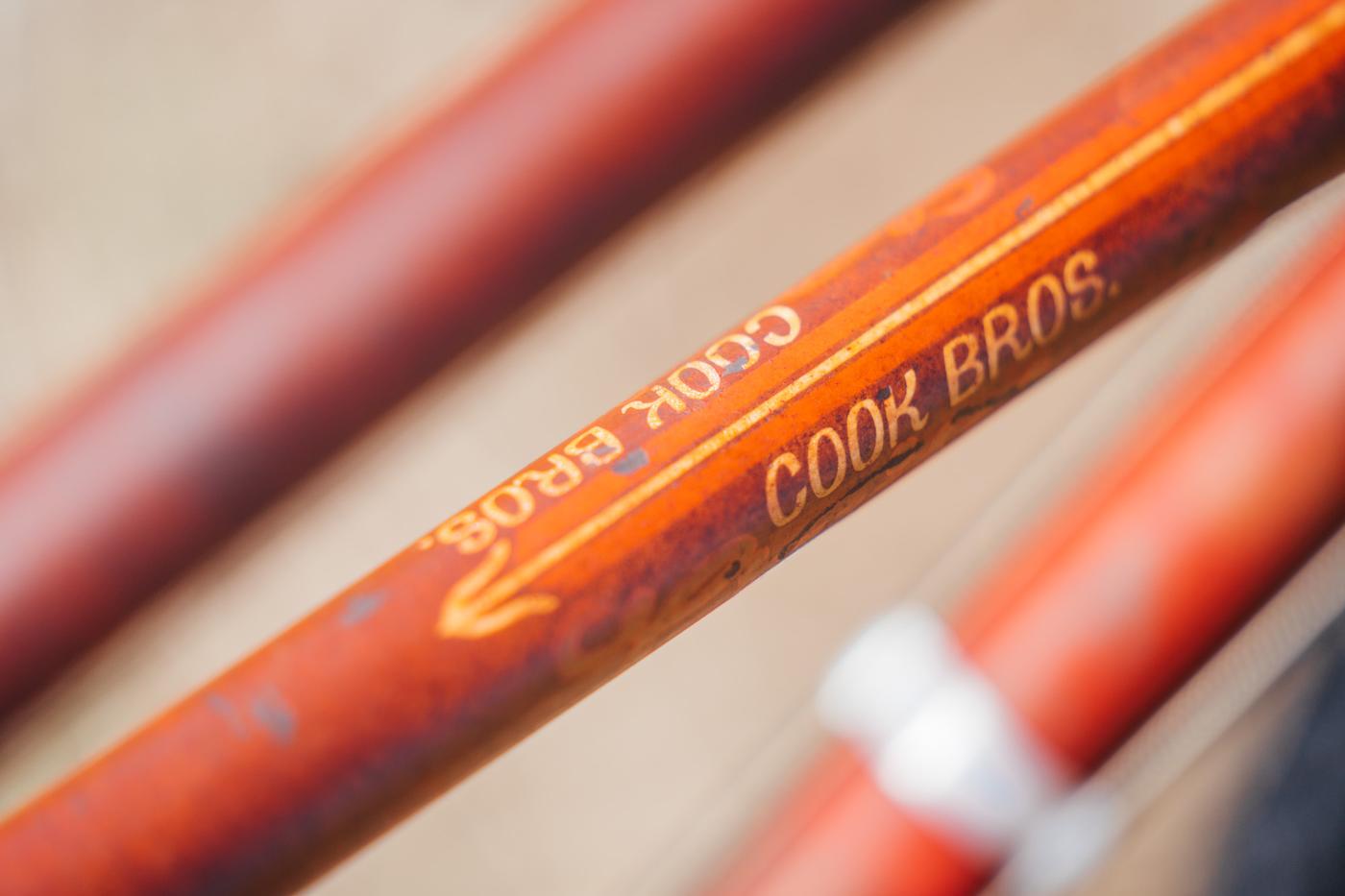 A photo of Steve riding this bike near the Floresta coal mine outside Crested Butte appeared in a 1980 issue of the local Pilot newspaper, which also described the growing popularity of mountain bikes.  A third photo shows Steve in the middle of a collection of local riders lined up in the Oh-Be-Joyful valley outside Crested Butte, now a designated wilderness area. In what was intended to be a purely Cook Brothers Racing lineup, 5 of these bikes with similar adaptations are shown.  Cotton T-shirts, loose shorts, hiking boots, and socks were the apparel of choice, with not a cycling helmet in sight. 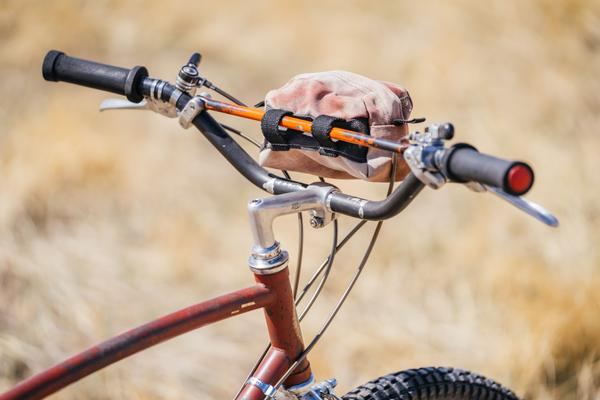 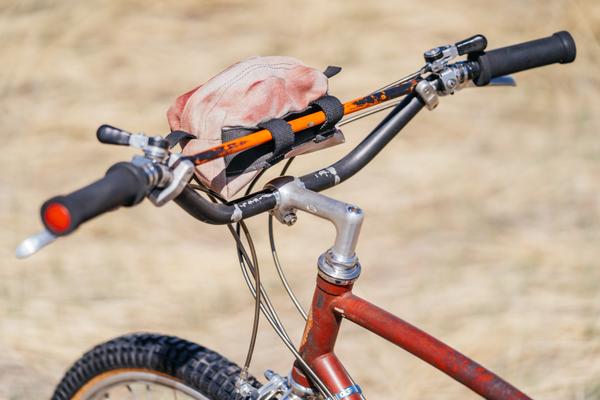 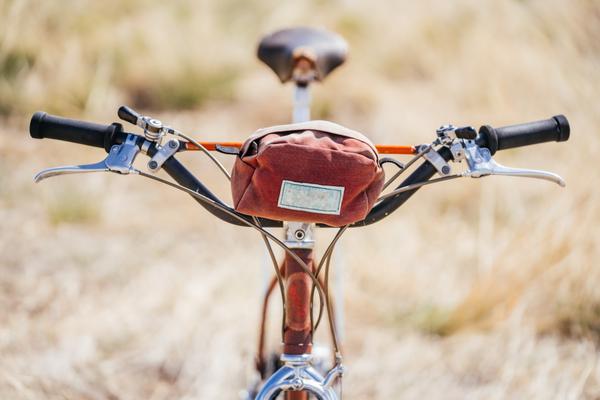 Steve would own three Cook Brothers bikes in the early 1980s, two of which are still known to exist, while the third was stolen.  Before restoration, this bike was found rusting away in a garden.  Some 800 or so Cook Brothers 26-inch wheeled cruiser bikes were made, with the vast majority remaining as single-speed BMX bikes.  However, the small amount converted to geared bikes ended up playing an essential role in the history of the mountain bike as an inexpensive entry point for many to the burgeoning sport.  Sadly, Steve Cook recently passed away; however, his legacy will be remembered in a series of future articles featuring his historic bikes as they are restored.

The bike as found outside before restoration work began. Frank Dejonghe photo. 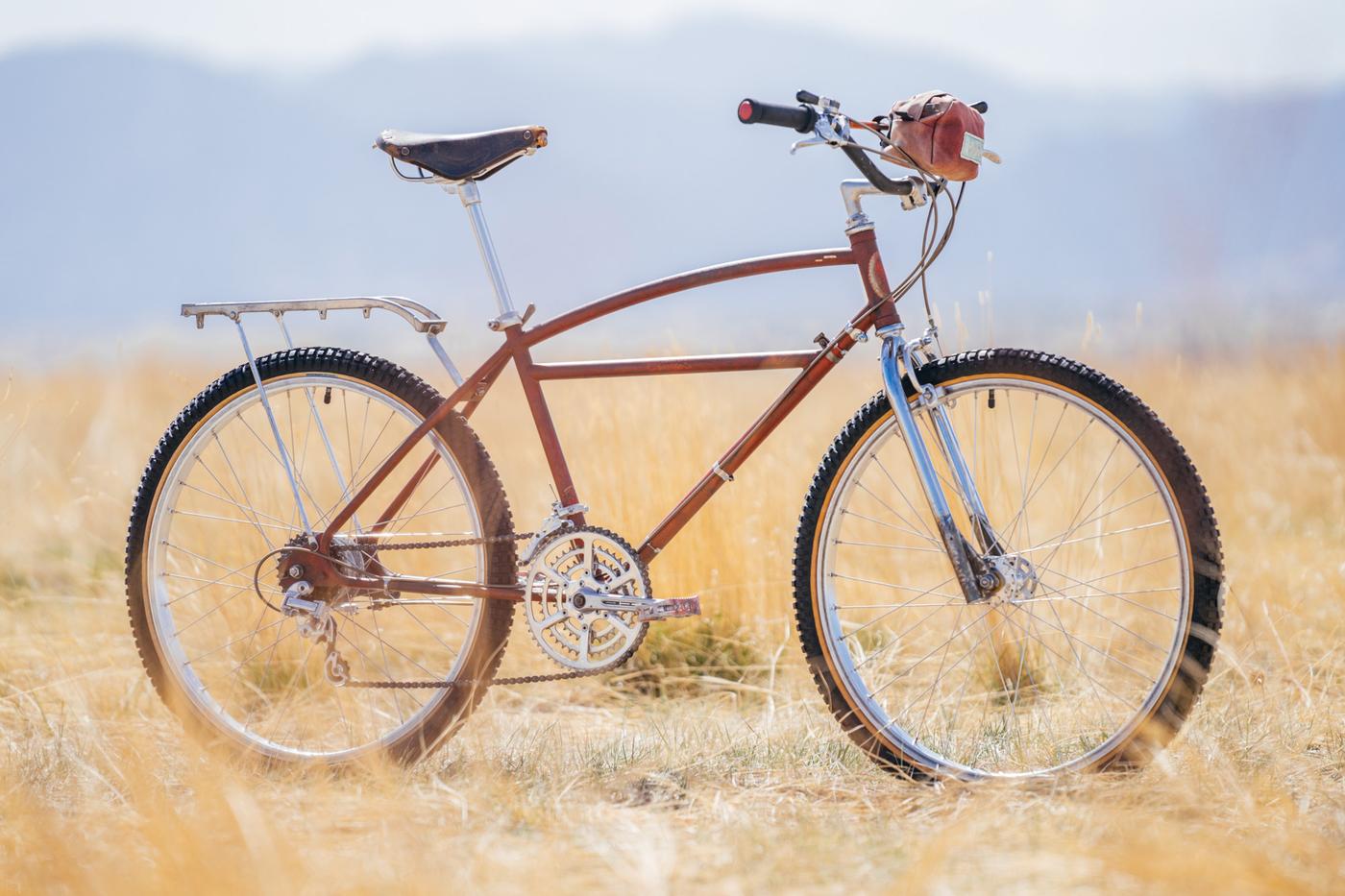 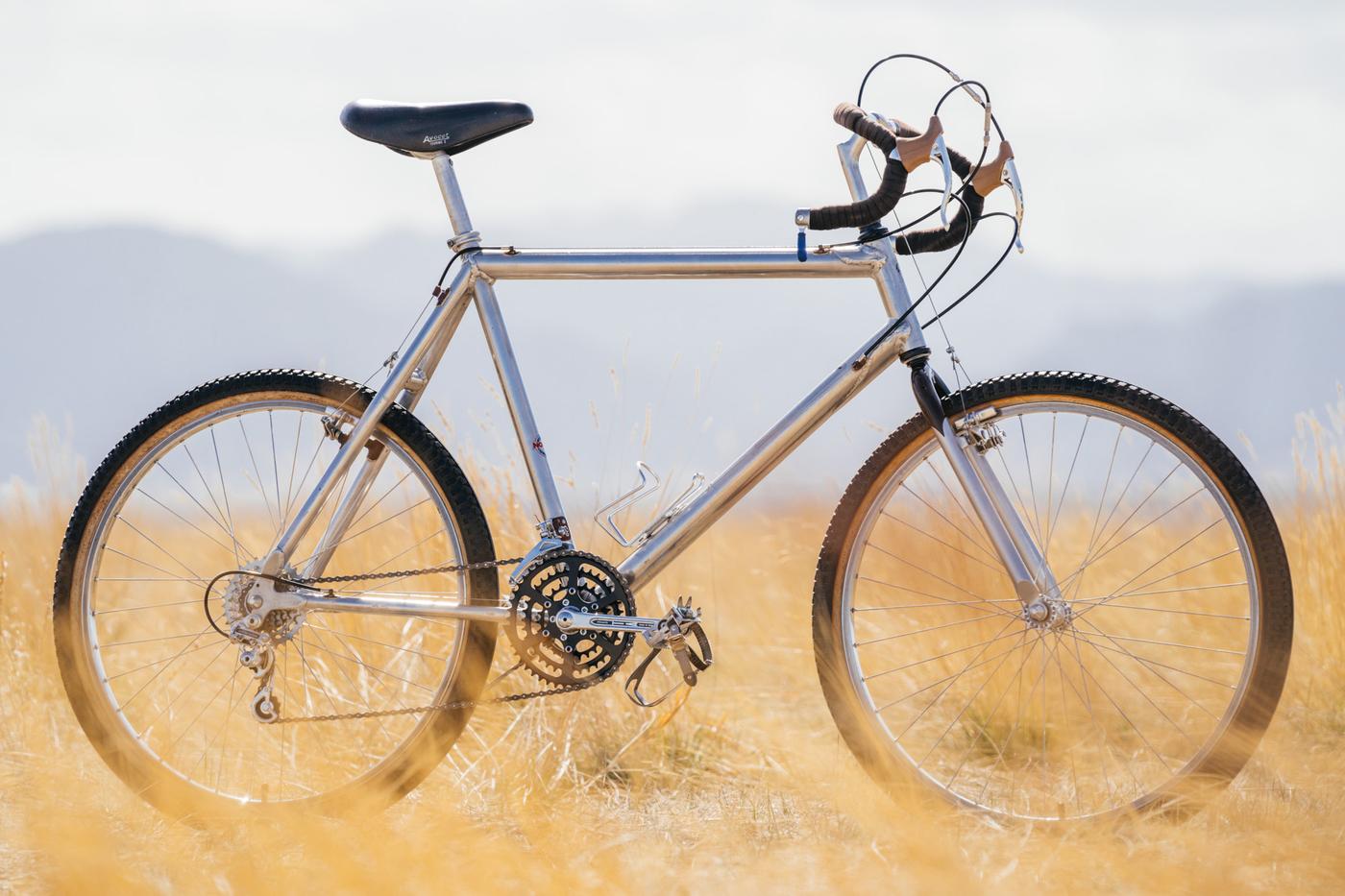 What is most interesting about this Cook Brothers is how Steve modified a racing cruiser to fit into his definition of a Klunker. He modified the frame and components to suit his needs and make the bike a more robust platform for legit backcountry exploration, hence the rear rack! Although, less than a year later, he would drop this platform for something “new” from Cunningham… stay tuned for the story on this one later!