Electronic shifting? Aero, integrated bars and cables? Stiffer, lighter, stronger? E-assist? GTFO. This is what we want to see from brands in 2022. The problem is, not many brands have a legacy like this backing them! Ritchey displayed this wonderful bike Tom built for his dad in the 70s and it has details to spare! Check out the rear brake cable routing… The Hudski Doggler is a perfect all rounder bike for city, gravel, or singletrack. At the ‘Otter this year, the brand displayed their new geometry, featuring a “little bit more bottom bracket drop” and “a little bit slacker head angle”, following suit of the cycling industry’s never-ending pursuit of geometry perfection. Need mounts? This bike has them all. Best of all, the new 2022 model is available for pre-order in Mountain, Gravel, and City build kits, all for $2200… Marin, like a lot of California companies, have been coming to Sea Otter for decades displaying its bikes designed for dirt roads and singletrack. While the modern Bear Valley might be an entry-level hardtail, this vintage Bear Valley from the 1990s caught our eye. What’s really neat about this bike is the paint jobs from this era are inspiring and influencing Marin’s current offerings. It’s always nice to see brands nod to the past in current catalogs. Also, we love the modern Dart and Smoke tire offerings from Panaracer, which are perfect for your vintage steeds! We like ti bikes, thicc tires, and forks made of steel over here so when we saw this Corvus Crow Pass Ti in the Corvus tent, we had to document it. With a steel fork, sliding dropouts, clearance for 27.5+ or 29+ wheels, a machined yoke, and a hike a bike grab handle, this one checks a lot of the adventure touring boxes! 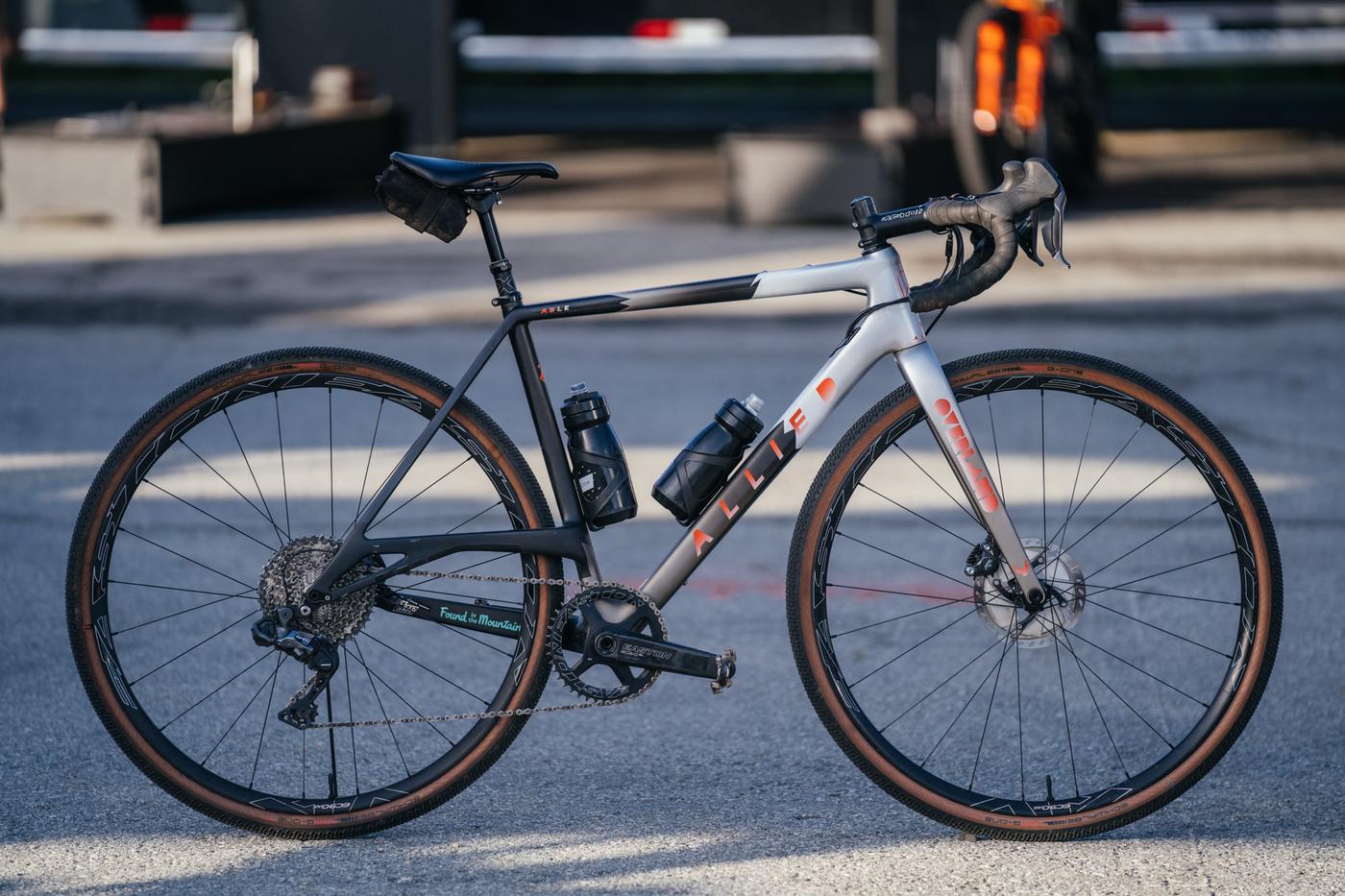 You’ve heard of people vinyl-wrapping their cars, but what about their bikes? Matt from Easton utilized RideWrap’s Tailored Protection™ kit to give his Allied Able a bit more pop. Built around Easton’s many gravel components, this one jumped out at us, as you can really tell Matt rides the piss out of this thing. The best part is, if he ever wants to sell it, the factory paint will be protected by the RideWrap. While we jest about not liking electronic shifting and integrated cockpits, something is soothing about seeing a modern bike with clean lines, especially one designed, engineered, and manufactured in the USA. ENVE’s Custom Road Bike is only offered as a 100% custom geometry and is already stunning, but when you check out this paint job in detail, prepare to have your mind blown. 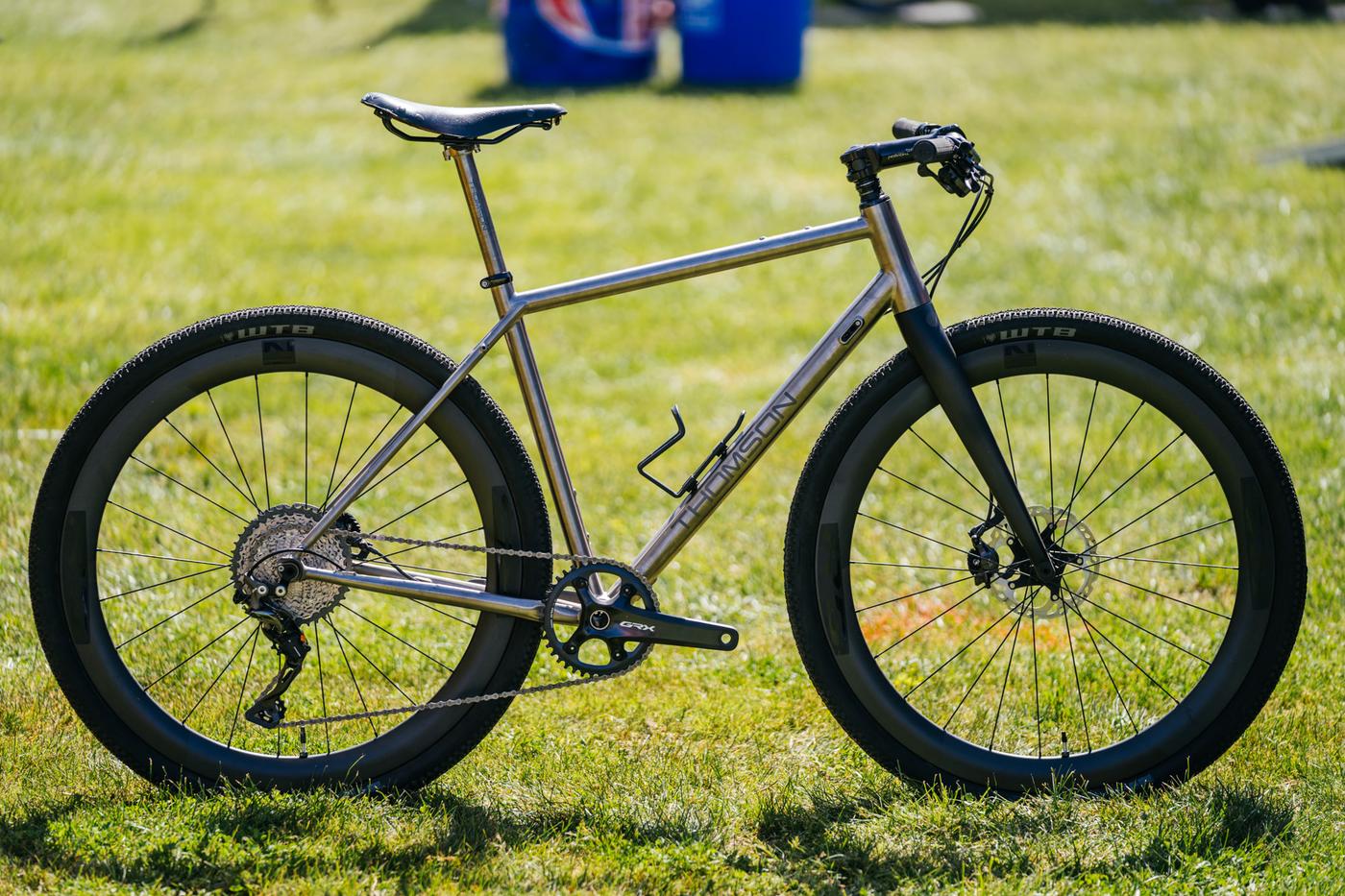 Thomson titanium gravel bike first landed here on The Radavist in March of 2019 and since then, it’s undergone a few changes, most notably being the adoption of the T47 bottom bracket standard and improved tire clearance which was on display at their booth at Sea Otter. Flat bar bikes like this look so damn good! The Waheela is a carbon chassis gravel bike from Otso Cycles with a few nifty features like an adjustable rear geometry vis a vis, a nifty rear dropout tuning chip, ample tire clearance (700c x 54mm, 650b x 54mm, or 29″ x 2.1″ tires.) and it’s designed to fit a road double crankset. New for 2022 are a few new colors, of which this copper really caught our eye! It’ll catch our attention if your brand brings a rim brake gravel bike to a tradeshow. If it’s an English Cycles, you can expect a lot of bike nerdery to ensue. We took our time documenting this stunning English, complete with a truss fork, double chainstays, a wishbone seat stay, EE Wings cranks, and some g’damn beautiful concept EE Brakes. We’re not drooling. You’re drooling… Kona’s homage klunkers from the late ’90s are coveted for their attractive lines, fun colors, and serve as capable chassis for funky builds. Colin was proudly showing off his “stars and bars” edition, which was Kona’s take on the Cook Brothers Cruiser from the early ’80s. He lives in San Fransisco and uses his A’ha as a Golden Gate party bike and on other cutty trails around the city. It’s a hodgepodge of 90s goodies, featuring a Cannondale Pepperoni fork and a Spin trispoke front wheel, White Industries freewheel and Porkchop bmx chainring. Colin installed the NOS green Michelin WildGripper just for the event. After looking for a WildGripper since 2014, he finally found one in his hometown of Durango, CO last summer and had been saving it for a special occasion. Thanks for chatting, Colin! The Radavist patch on Brian‘s rack bag caught our attention while walking the expo isles and the details and build accouterments of his custom Garbaggio pulled us in further. His custom frame is one-of-a-kind (well, technically, two-of-a-kind) and has a great backstory. From Brian: “After riding the Nutmeg Nor’Easter V last fall, my business partner and I realized that we needed a special bike to tackle those mysterious chunky wooded “trails” again. Not a gravel bike or mountain bike, but a rugged, fast-maneuvering party bike, with fat tires, bull moose bars, and a rack for seasonally appropriate refreshments. Oh, and a handle, so its easy to carry over downed trees, streams, and boulders that attempt to dissuade our passage.

We worked with Nick who we hung out with at the Nor’Easter, who had built some bikes for the folks at Crust, and jammed on ideas. His nascent artsy frame series “Garbaggio” was a perfect fit. Fun, functional, chaotic bikes that rip. Nick built the frame set with his own concept for the final paint job, and we built up the bikes, featuring lots of goodies from Paul Components (Klamper breaks, Love levers, Tall and Handsome seat post), White Industries (cranks, chanring), mixed with some modern flair — Hunt Adventure 650b carbon wheels with SimWorks Homage tires, and SRAM mountain drivetrain. The Surly 24-pack rack and ILE Porteur bag means there’s always room for treats on the trail. I rode the gravel/XC course at Sea Otter twice on this bike, and couldn’t have been happier. This bike knows how to party! (Although Tom Ritchey mentioned he’d like to see this upgraded with Ritchey carbon bullmoose bars. We’ll see!)” To read even more about Brian’s Garbggio, head over to this blog post. State Bicycle Co. and Dynaplug are auctioning off a collaboration Meerkat Klunker to benefit the Sierra Buttes Trail Stewardship (SBTS). The bike is built on State’s revered Klunker frame, with Velocity rims, Paul Component hubs, a White Industries crankset and headset, and a Thomson seatpost. All proceeds from the raffle will be donated to SBTS, contributing to their mission to build trails and communities in California’s Lost Sierra region. We’ll have more info on how to enter the raffle in the coming weeks! 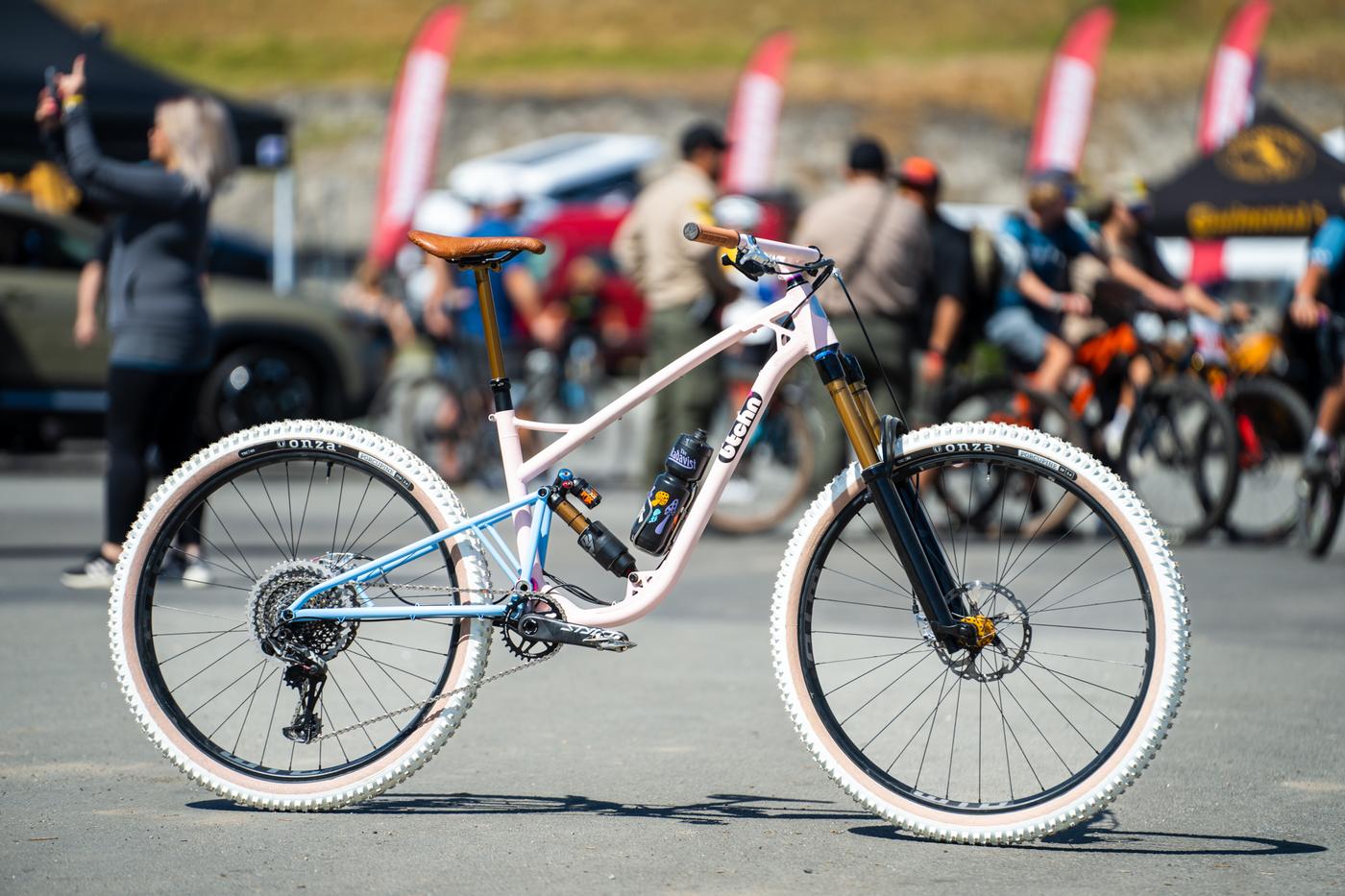 Did we save the best for last? Perhaps! Tyler of BTCHN’ was cruising around his new 160/170mm full suspension, mullet, enduro bike at the show. The chromoly single pivot frame utilizes a threaded bottom bracket as the main pivot and looks gorgeous! It’s rocking a progressive geometry that’s entirely designed and built in Tyler’s Chico, CA shop. This is not a one-off design, but rather a foray into a small batch launch that will be available in the near future and we’ll be sharing in-depth specs and info when it is. So, stay tuned!