From Snow to Sand: The Otso Voytek is More Than Just a Fat Bike

Photo via the Pro’s Closet Museum

The Problem with Fat Bikes

In 1992 when Clark-Kent bikes introduced their “fat bike” which was, in reality, two rims laced together to form a wide wheel footprint, complete with two tires on each wheel. The bike was built for the Iditabike race, a 200-mile point-to-point race in Alaska. It would be years until brands like Surly would introduce a production model fat bike with actual, wide rims, and tires designed for said rims. These bikes were veritable tanks, with wider q-factors to clear the 4.5-5″ tires and a stout steel frame. They were stable and capable in powdery snow and with studded tires, even able to take on icy conditions. 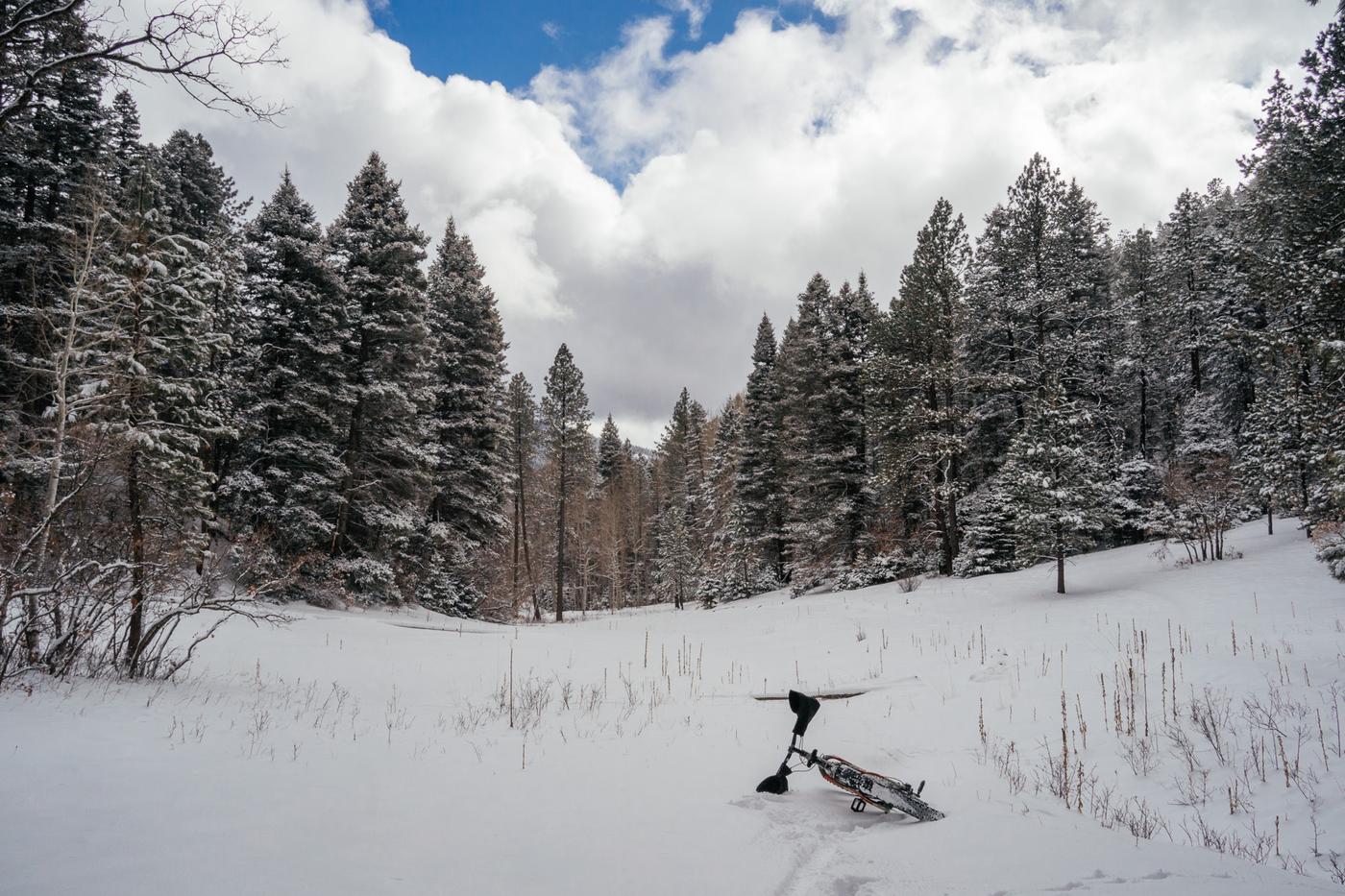 A decade later and just about every brand had designed carbon frame fat bikes which cut down on the weight considerably but neglected to solve one of the main issues riders have with these bikes: the wide q-factor. This is what I believe to be the reason a lot of fat bikes just sit in the bike shed during the warmer months when they’re not being pedaled in snow or deep sand found in desert touring conditions. Pedaling a fat bike q-factor, in between riding “normal” q-factor bikes can be a jarring experience. To be honest, it’s kind of why I never really felt the need to own one. My experience with deep sand in the desert is it’s always easier to walk or push your bike and we didn’t really get much snow in SoCal.

When we moved to Santa Fe in early 2020, that changed… drastically. 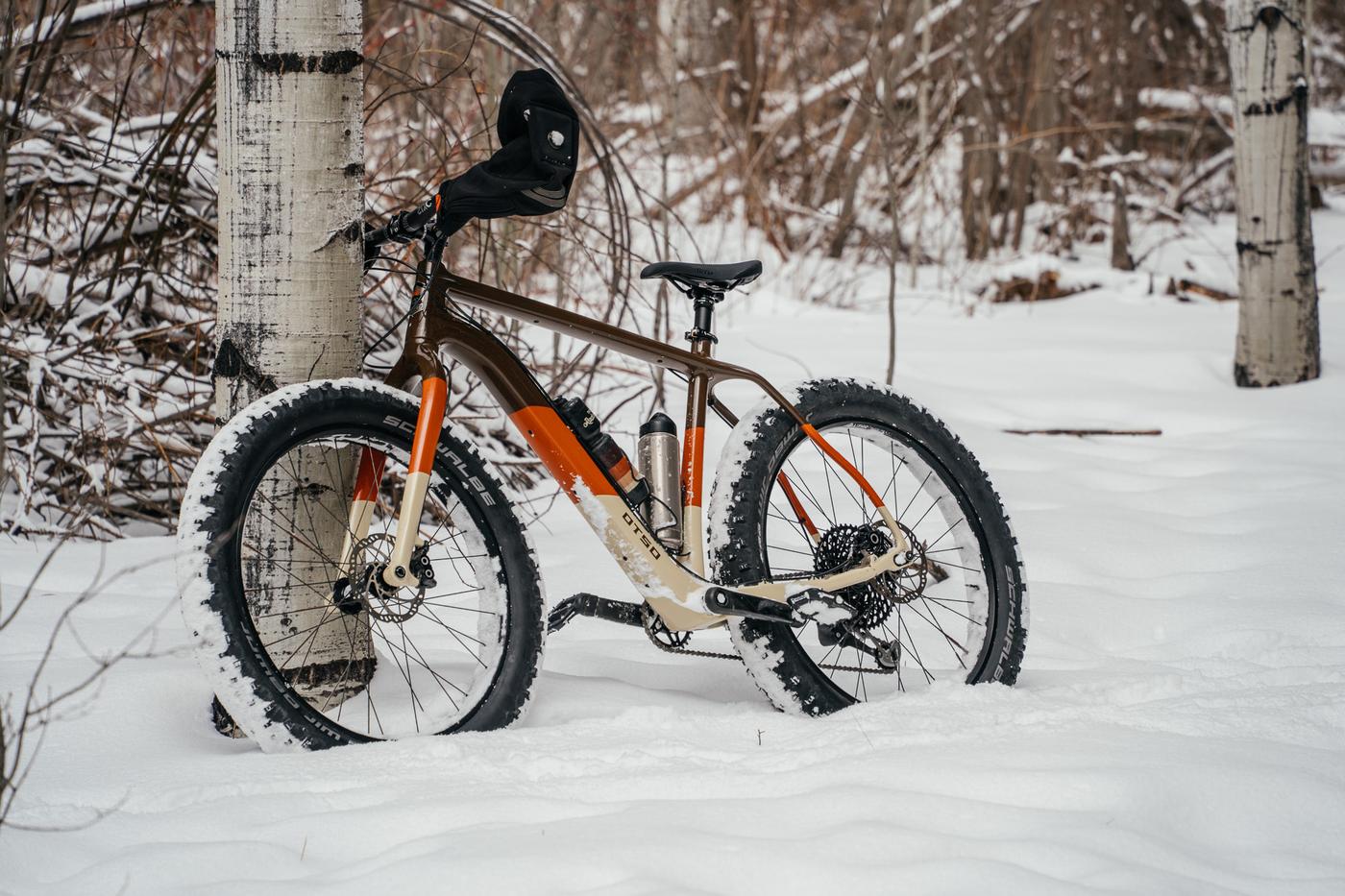 Otso contacted me last fall, asking if I’d want to give their Voytek a whirl. They have this cool program where you can get custom paint colors using their paint scheme, so we worked up a design based on a water bottle design we had at the time. A few weeks later and this beautiful, plump, and light bike showed up. The box was so light I thought maybe it just had wheels in it. There can’t be a bike in there, no way. Well, there was, and once the snow fell here in town, I began to ride it on our trials. Before we get into that though, let’s look at what the Voytek is… 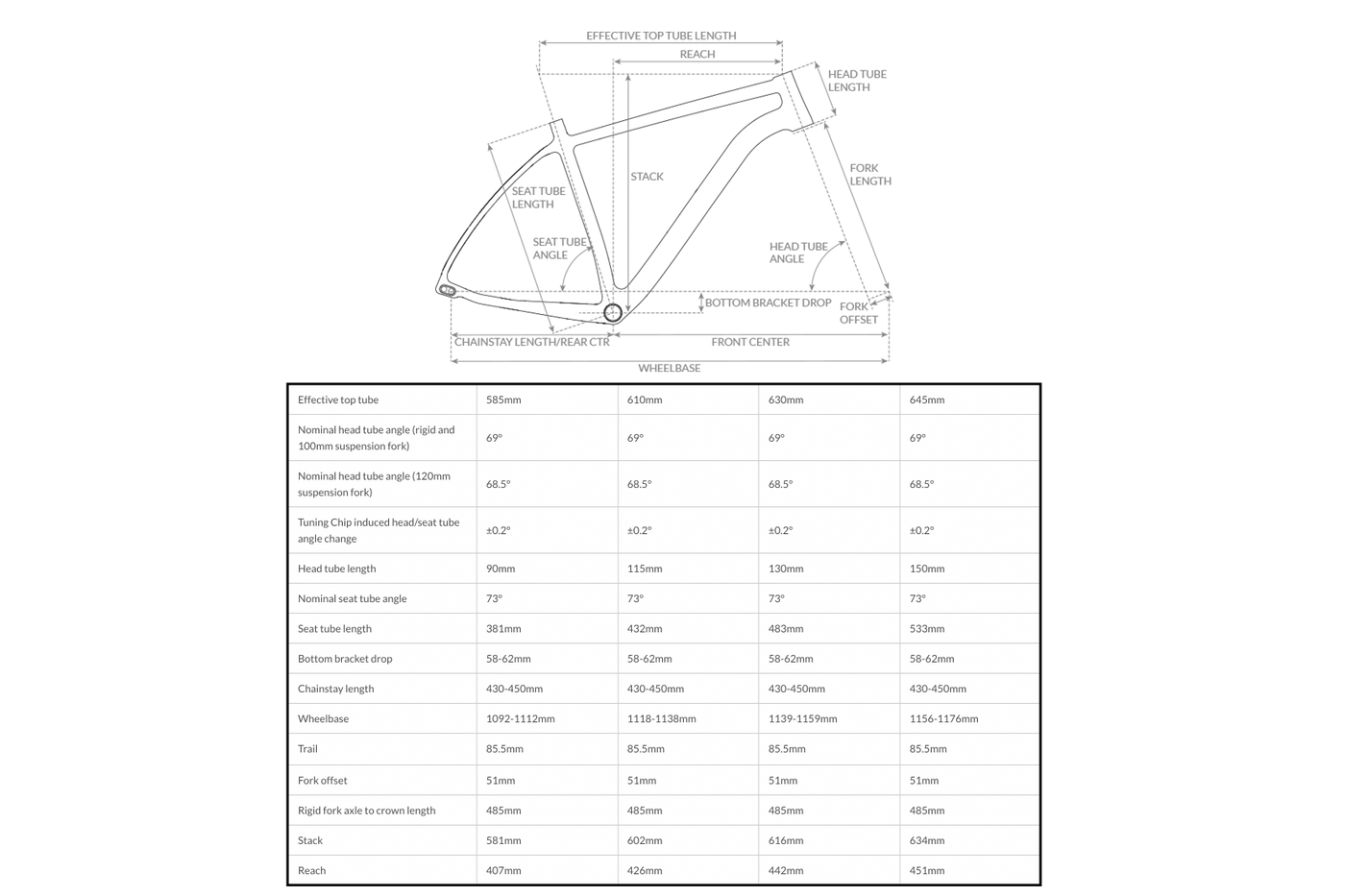 It feels weird to call a fat bike an XC bike but the geometry doesn’t lie.

What’s unique about the Voytek is it can take wheel sizes from 26+, 27.5+, and 29+, and thanks to the Tuning Chip, you can fiddle with 20mm of wheelbase length and 4mm of bottom bracket height. This allows the geo wizards to have their heyday fine-tuning the ride quality based on whatever wheel and tire combo you’ve got installed. 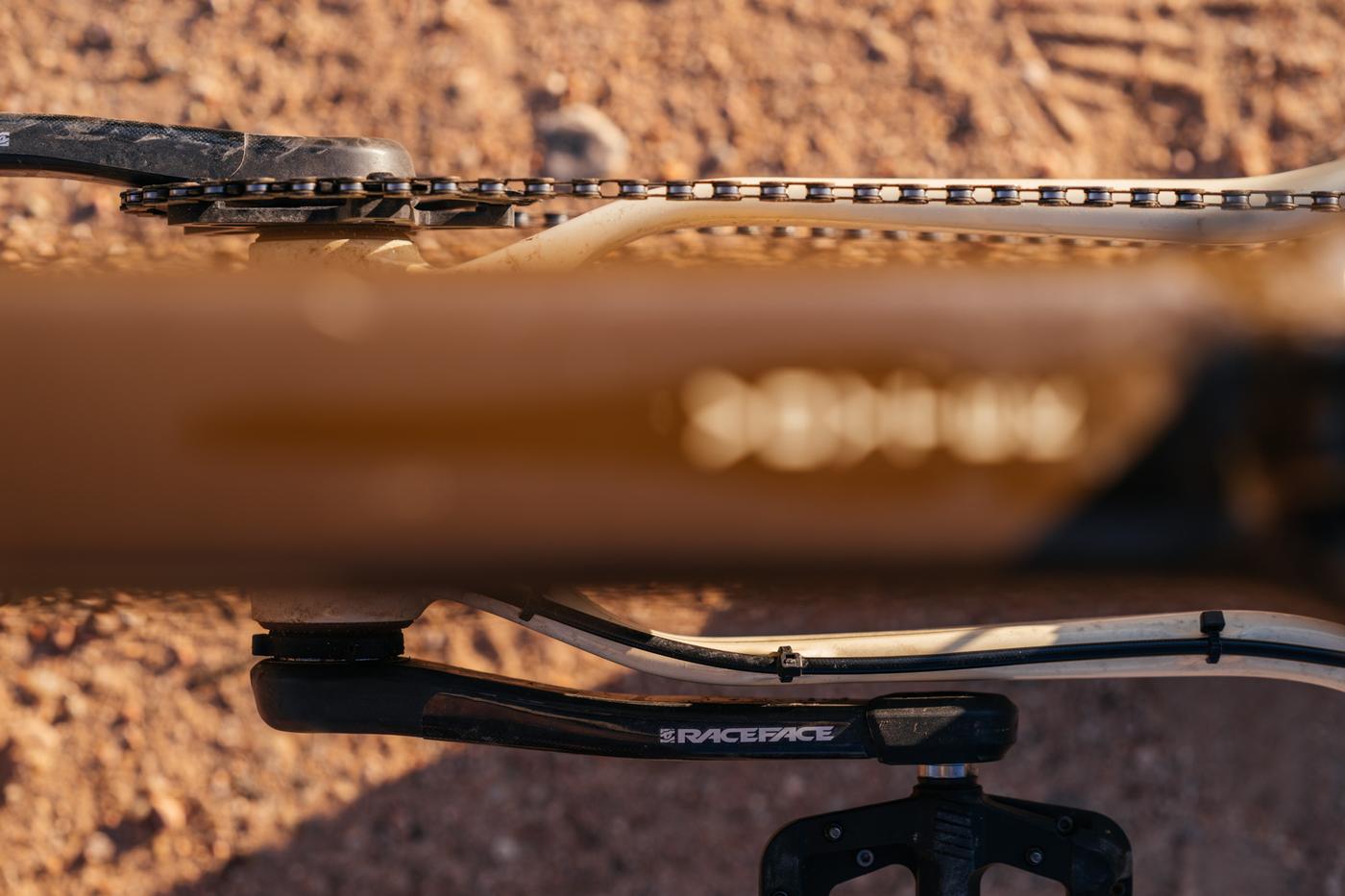 Its main accolade and perhaps the kingpin to its versatility lies in the fact that the Voytek has the narrowest q-factor out of any production fat bike. The frame uses an 83mm bottom bracket standard, which results in a 183mm q-factor. For comparison, that’s only 10mm wider than a standard mountain bike q-factor, or 5mm per pedal side. If that seems like a lot, pick up a metric ruler and look at 5mm. I’ve only ridden the Voytek with flat pedals and can say with confidence that the wider q-factor is not noticeable.

The frame itself is dropper post-compatible and is able to morph into a hardtail easily, as it’s designed for a 120mm travel suspension fork. For the rigid purists, you can just run it with the suspension-corrected Voytek fat bike fork. 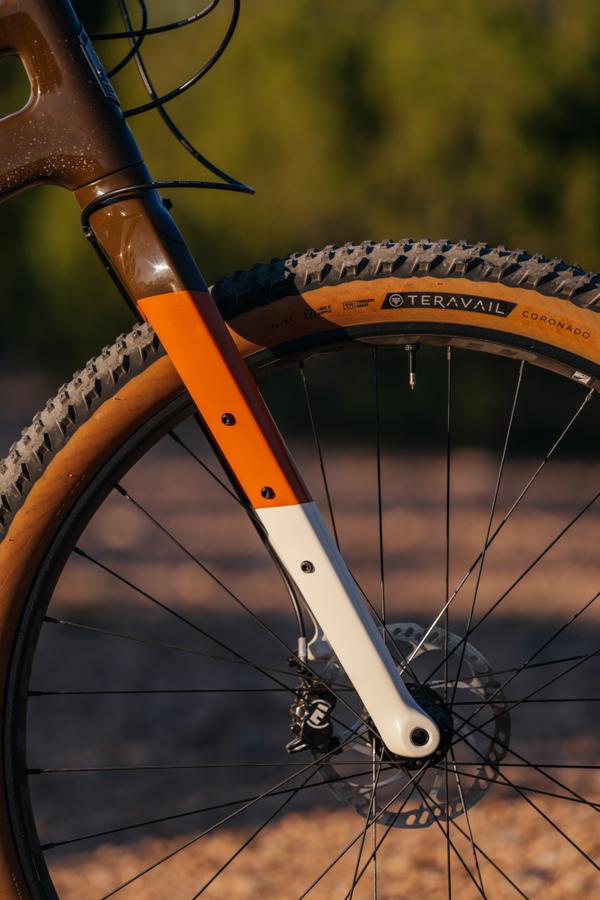 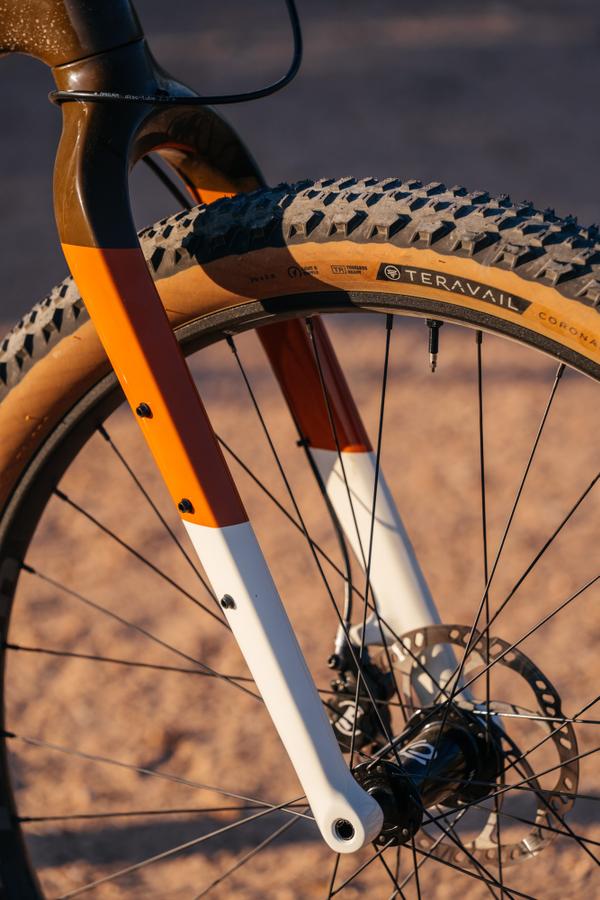 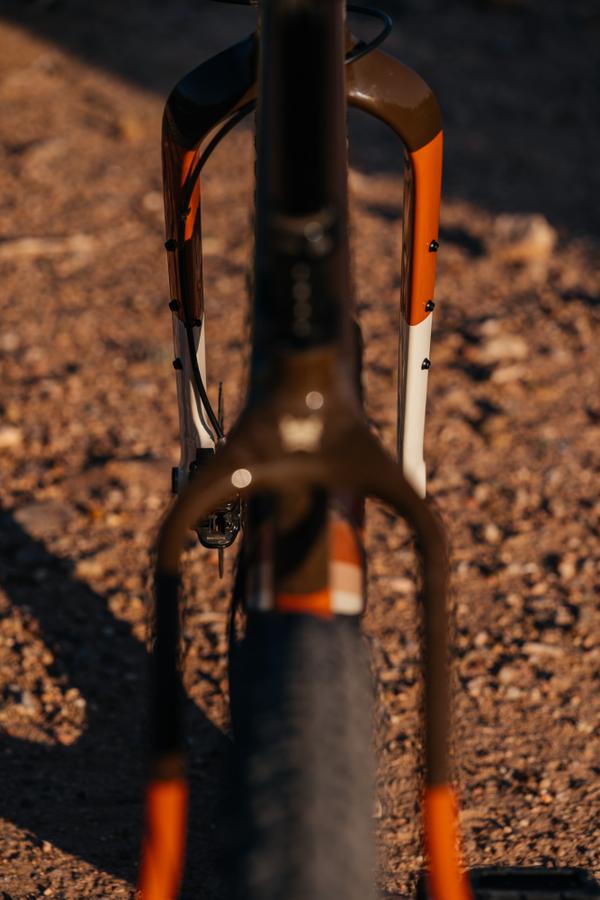 Speaking of the Fork

When I first received the Voytek, it had the older style fork on it. You can see it in the snow photos. More recently, I’ve been riding the new fork, which now has cargo bosses for bike touring or carrying more water on desert rides. This fork, much like the frame, has a unique body language, meshing hard angles with rounded contours quite well. The axle to crown is 485mm in length with a 51mm offset. 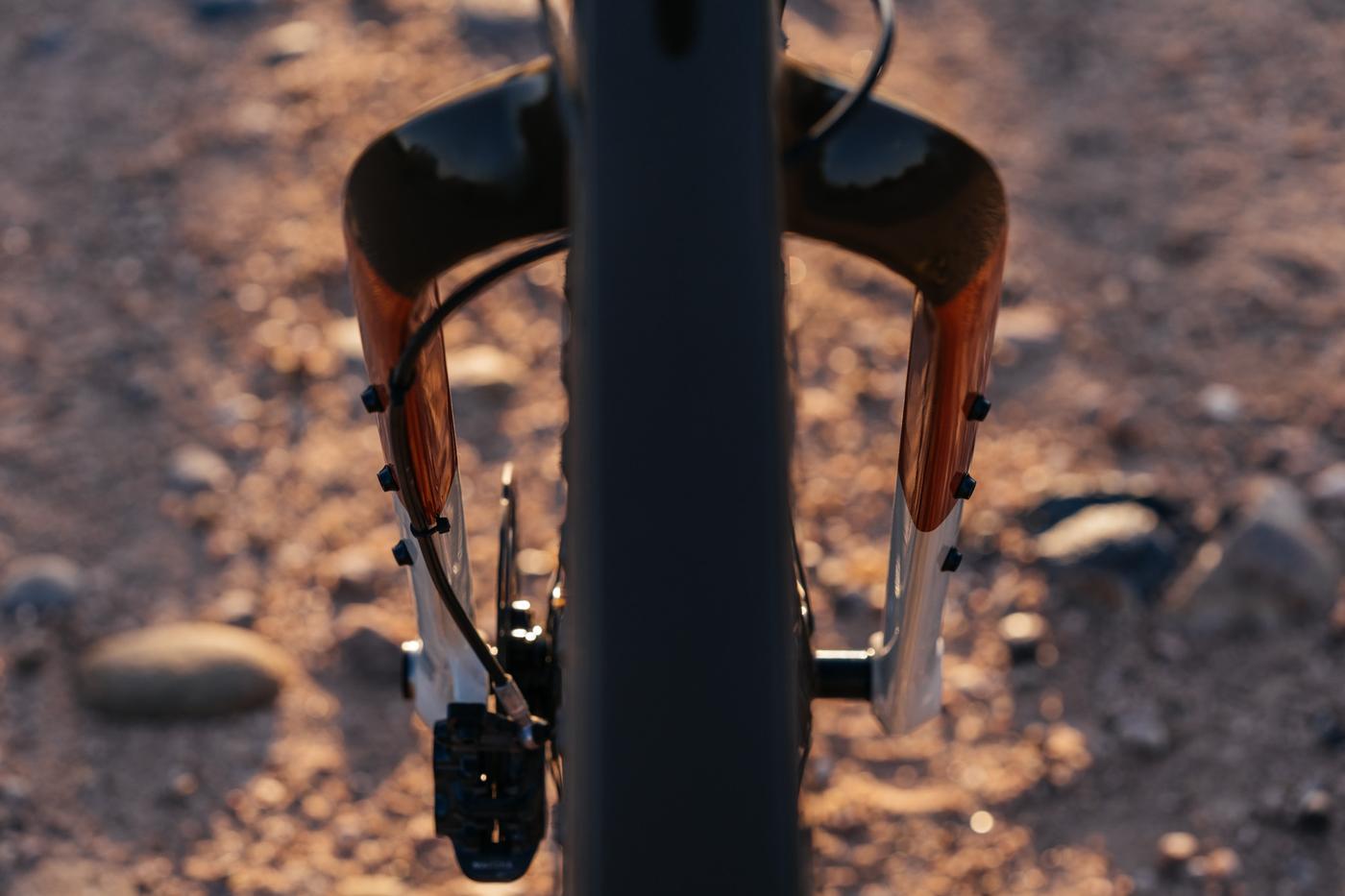 Much like the frame, the fork feels very roomy, making these 2.8″ 29er tires look dainty. It’s definitely something that takes a little to get used to. But look on the bright side, if you hit our sticky “caliche” mud on a ride, there’s plenty of clearance. ;-) 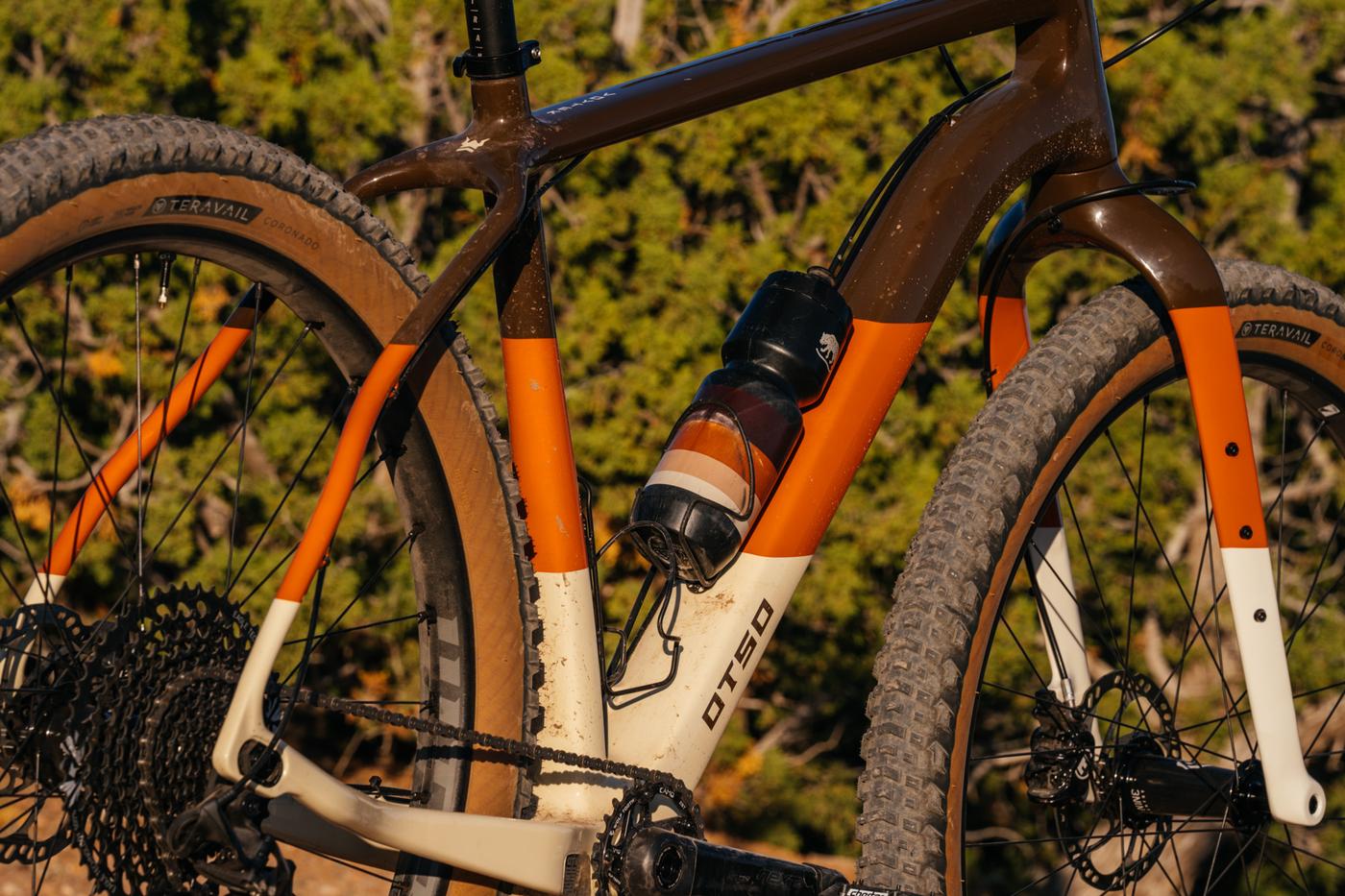 The Voytek is not a rebranded frameset found in a Chinese blank product catalog. It’s been designed from the ground up and it shows. Making a fat bike that looks as good with 29+ wheels ain’t easy but the Voytek utilizes the massive tubing profiles to ease the eyes and has plenty of beautiful moments where the tubes transition from hard, angular lines, to organic, swooping curves. 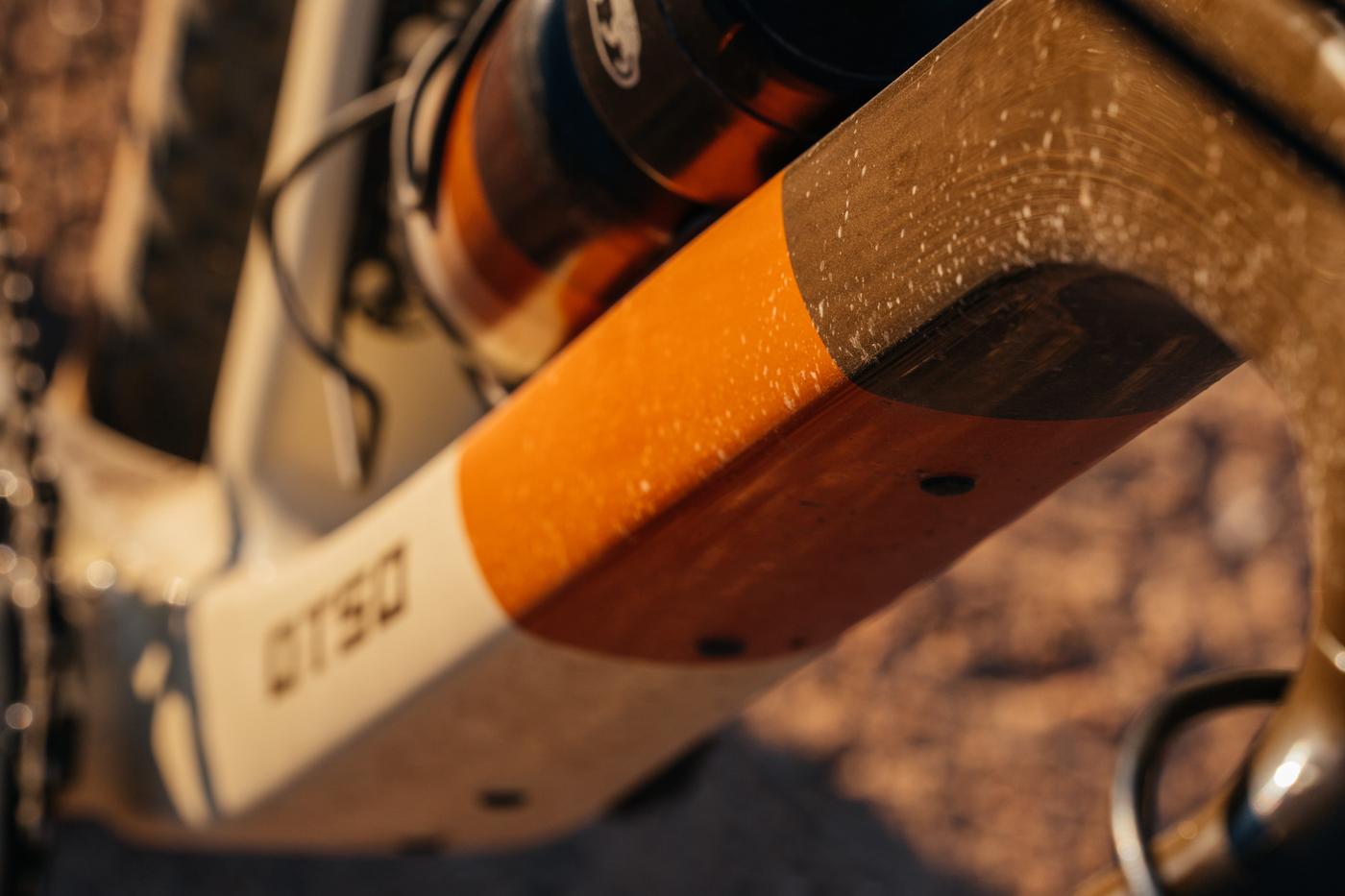 Carbon chassis bikes can go either way with too-angular profiles or too-swoopy but the Voytek is a pleasant hybrid of both. 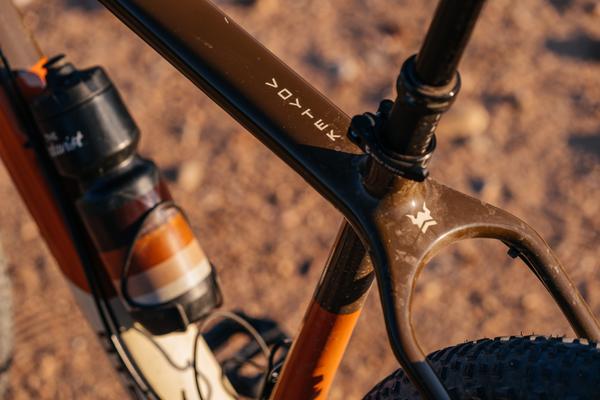 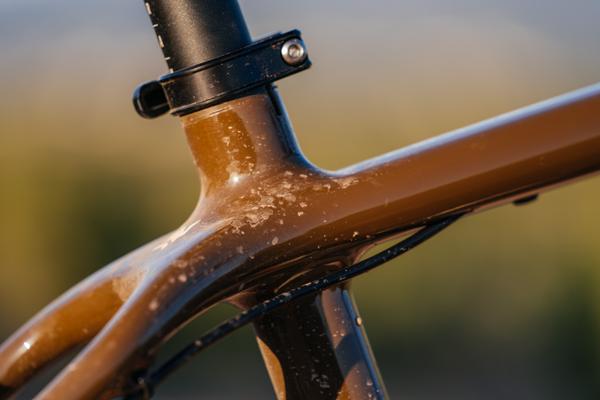 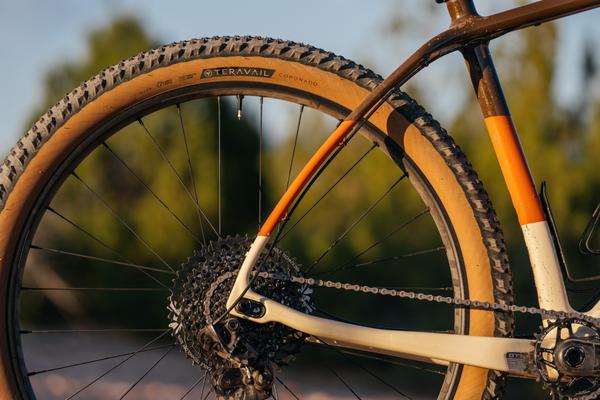 On top of the normal accouterments you’d expect from an expedition-friendly bike, the Voytek has beautiful brake line mounting points, extra bosses on the downtube for a bolt-on fender or a third cargo cage location. The tuning chip dropouts are easy on the eyes, integrated in a way typically reserved for organic evolution. 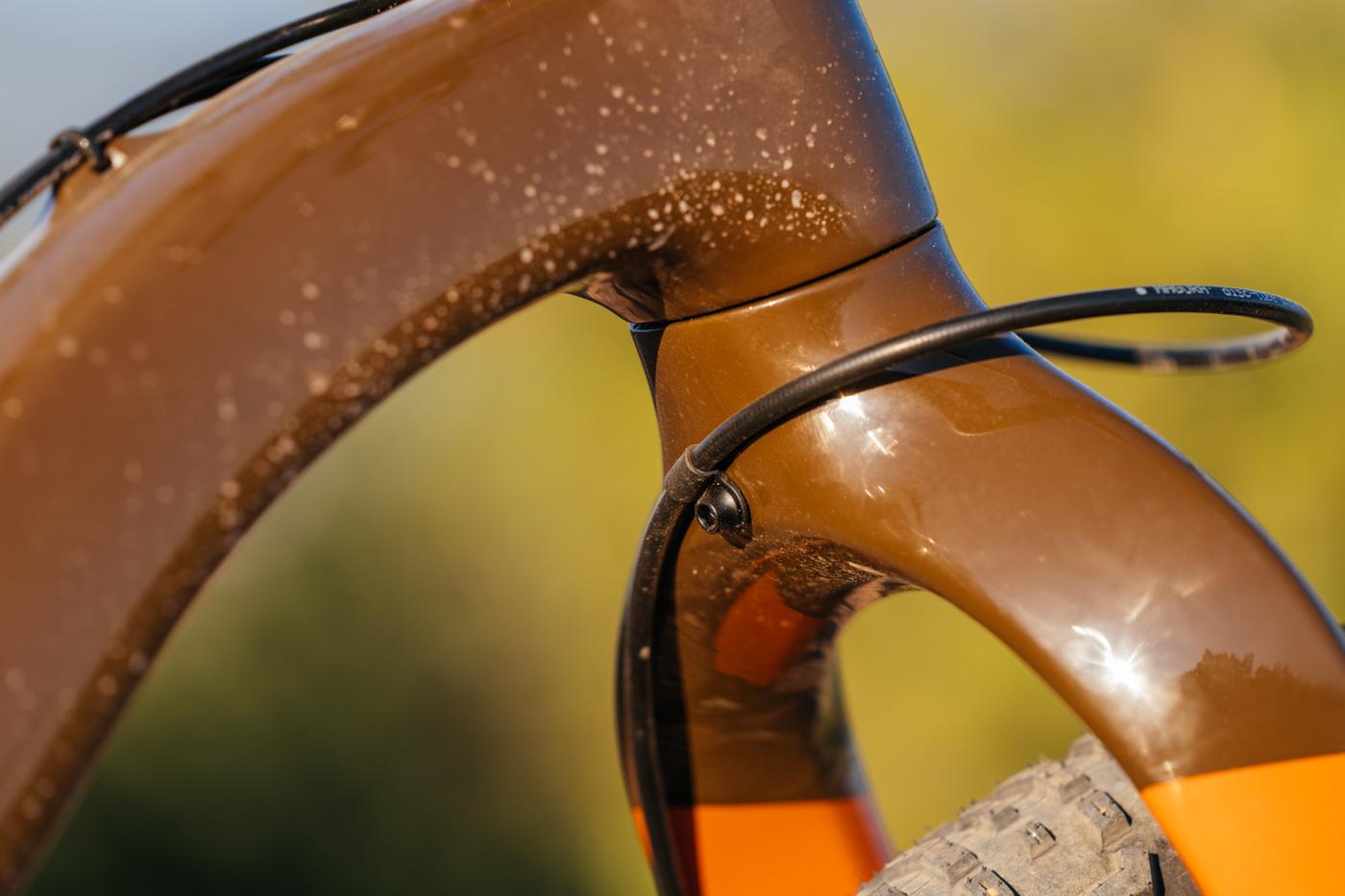 The subtle kink in the downtube is to allow for a suspension fork crown clearance and usually, this can look out of place when a bike is built rigid, however, this offers an intentional transition from the big, meaty downtube to the elegant and shaped fork. 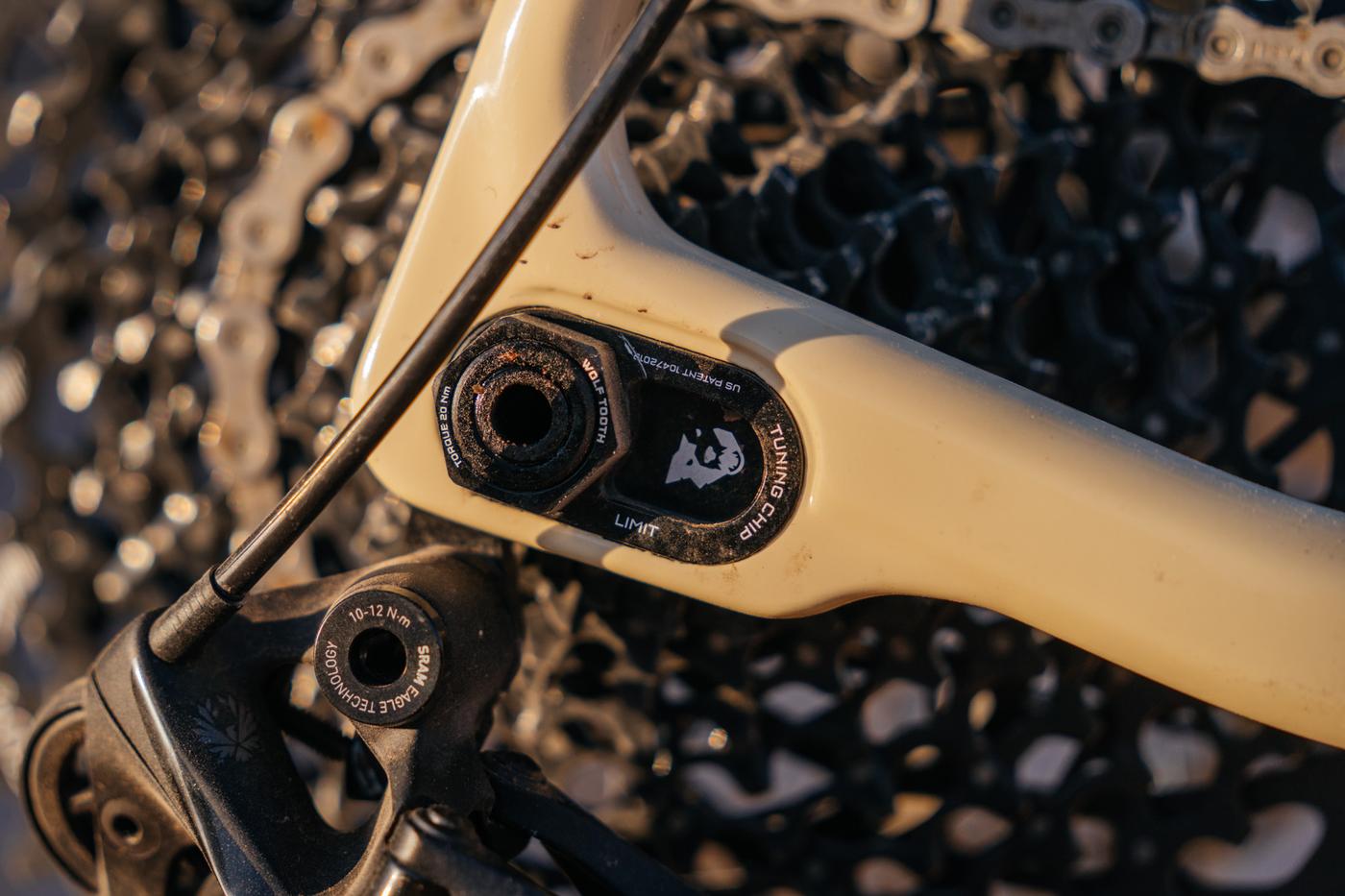 I know I’m giving this bike high praise and it’s because it deserves it. In fact, my only critique is I wish the Singlespeed Conversion Tuning Chip kit worked on this bike because it would be an amazing contender for an easy singlespeed conversion. 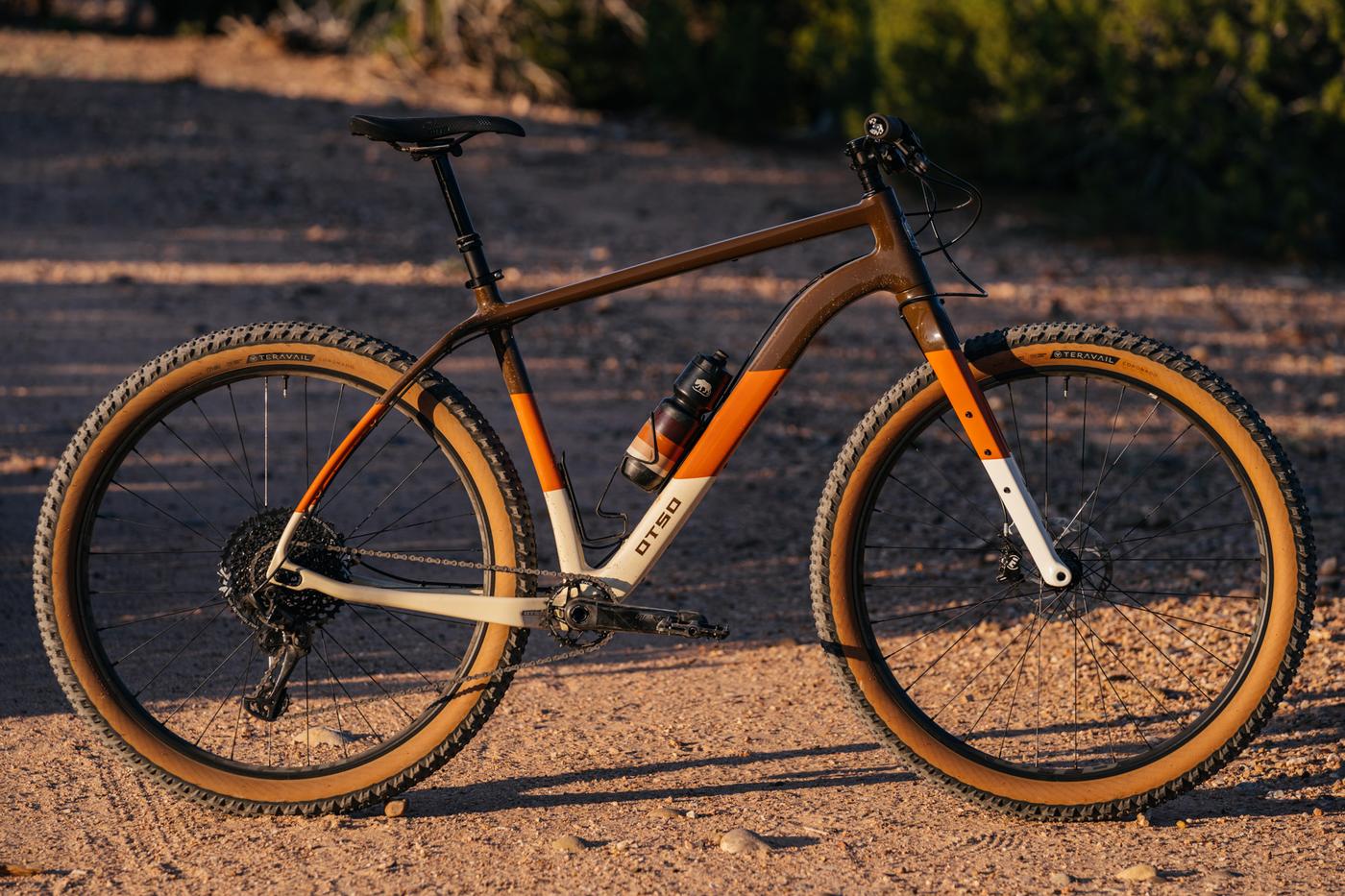 As I hinted at earlier in this review, the Voytek is light. I’m talking gravel bike light. The size XL I reviewed weighs in at 23lbs on the nose, even with the dropper post. That is light. It’s the difference between throwing your back out lifting it over deadfall or barely noticing the weight as you portage it with ease. Even with the massive tubing profiles, the Voytek’s seat cluster features a nice, flat seat stay wishbone which tapers down to some dainty seat stays, offering a bit of give when the trail or road gets bumpy.

In its current build form, it floats across sand like a sidewinder and offers exceptional cornering due to its zippy and responsive XC geometry. With the right amount of pressure in full fatty mode, this thing is a traction king begging to be leaned into just a bit more on each turn.

Now, it’s a completely different beast on 26+ wheels with 4.5″ tires, and if I owned this bike, I’d err on the 29+ wheels until it became absolutely necessary to switch to the 26+ wheels. There’s something I like about the 29+ platform. Maybe it’s because I have a 36″ inseam and like feeling a bit higher off the ground, or it could be the cornering, the traction, and the softer ride a higher-volume, lower-pressure tire offers. Especially for touring, a 29+ wheel at various pressures can do just about anything. 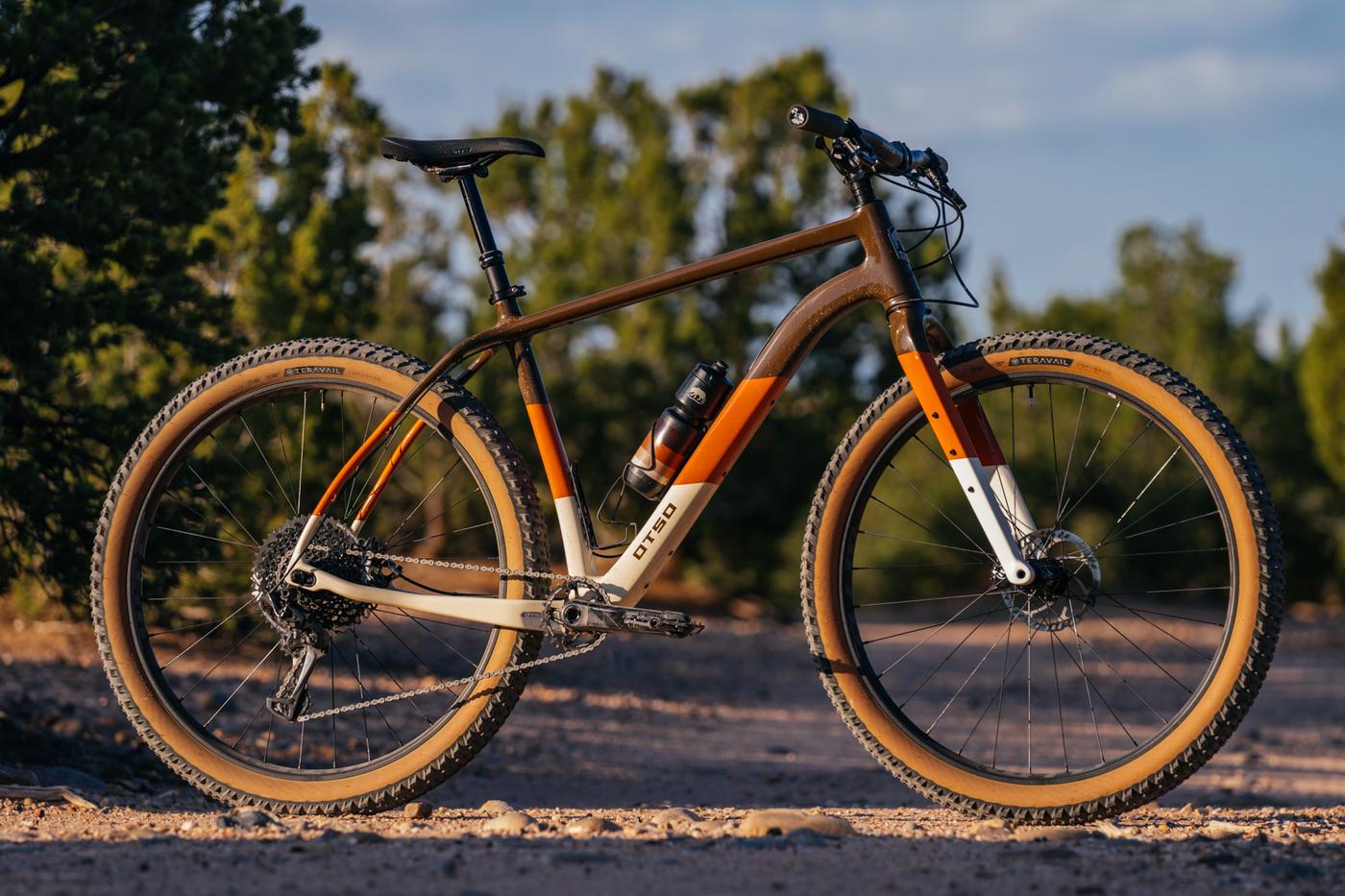 The Voytek is the next step in the evolution of the fat bike and Otso gave this platform a chance, delivering one of the most versatile bikes on the market. If you want the familiar feel of a mountain bike with the ability to traverse a variety of terrain, in all weather, then it’s a top contender. The lightweight carbon chassis is as beautiful as it is a joy to ride and with the XL frame built up as shown weighing in at 23 pounds, it’s a no-brainer for a big, burly tour in the backcountry.

You can buy the Voytek from Otso as a complete, specced similarly to shown here (dropper not included) for $3,770, or as a frameset (including BB+cranks) for $2,650. If you want this particular color scheme, you can drop them a note before you order…

Many thanks to Otso for letting me wield the Voytek through the seasons. If you have any questions, drop them in the comments.