Last year, while building up a Ritchey frame, I reached out to Martin at Second Spin Cycles, asking if he had any early Ritchey-brazed bullmoose bars. He responded “no,” prompting me to ask if he had any large bikes he was looking to sell. He responded with “actually… yes.”

Martin and I discussed price, shipping, and a few days later, a box showed up with my new-to-me 1984 Mountain Goat. Before we get into this story, let’s look at the who, what, and why of Mountain Goat Cycles! 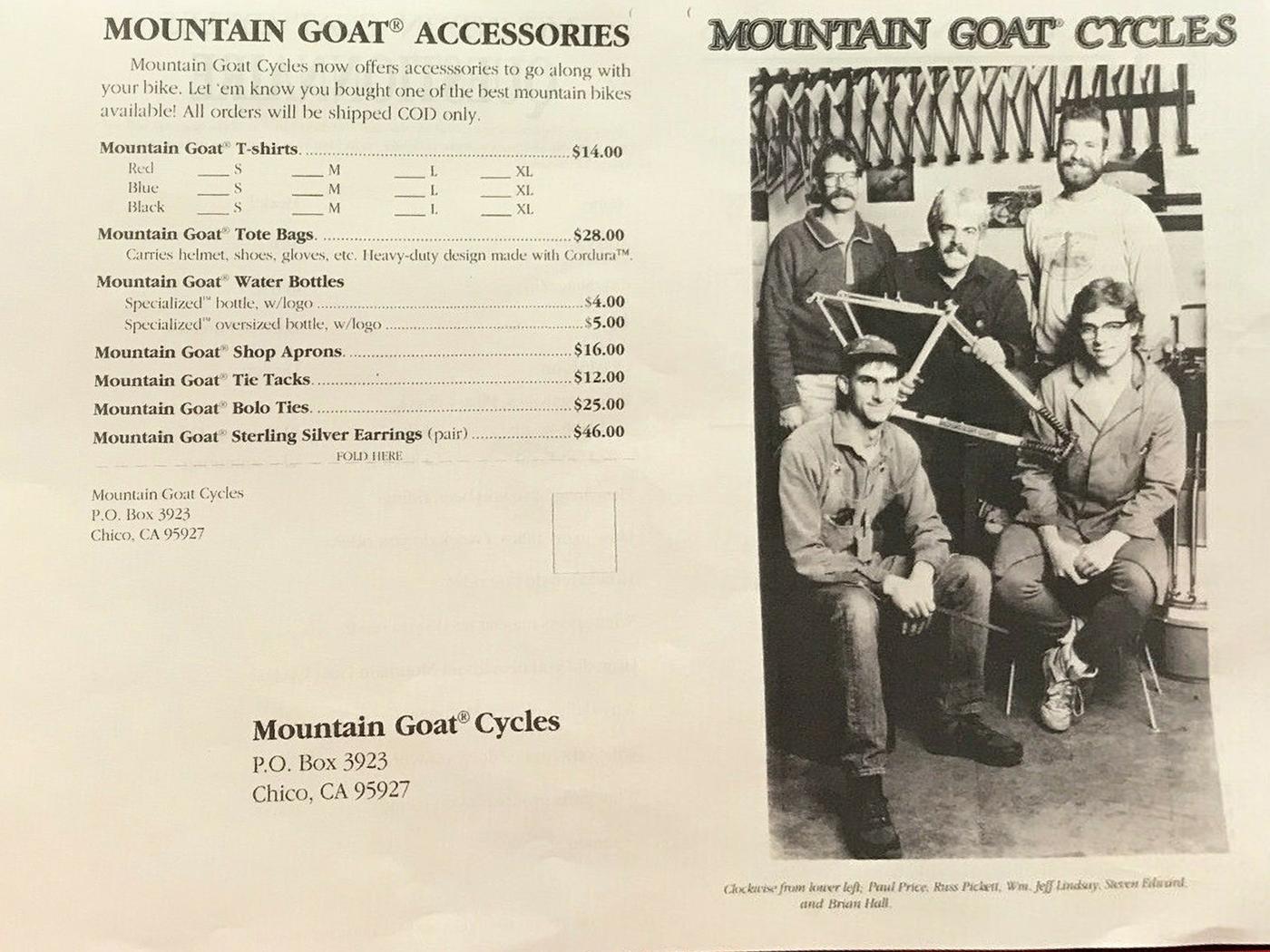 In 1972, a fella named Jeff Lindsay, out of Chico, California built his first road bike as a high school senior project. In a story still repeated to this day with new framebuilders, Jeff’s friends saw the frame and asked him to make them a bike. Shortly after, Jeff was building bikes under his W.J. Lindsay moniker. 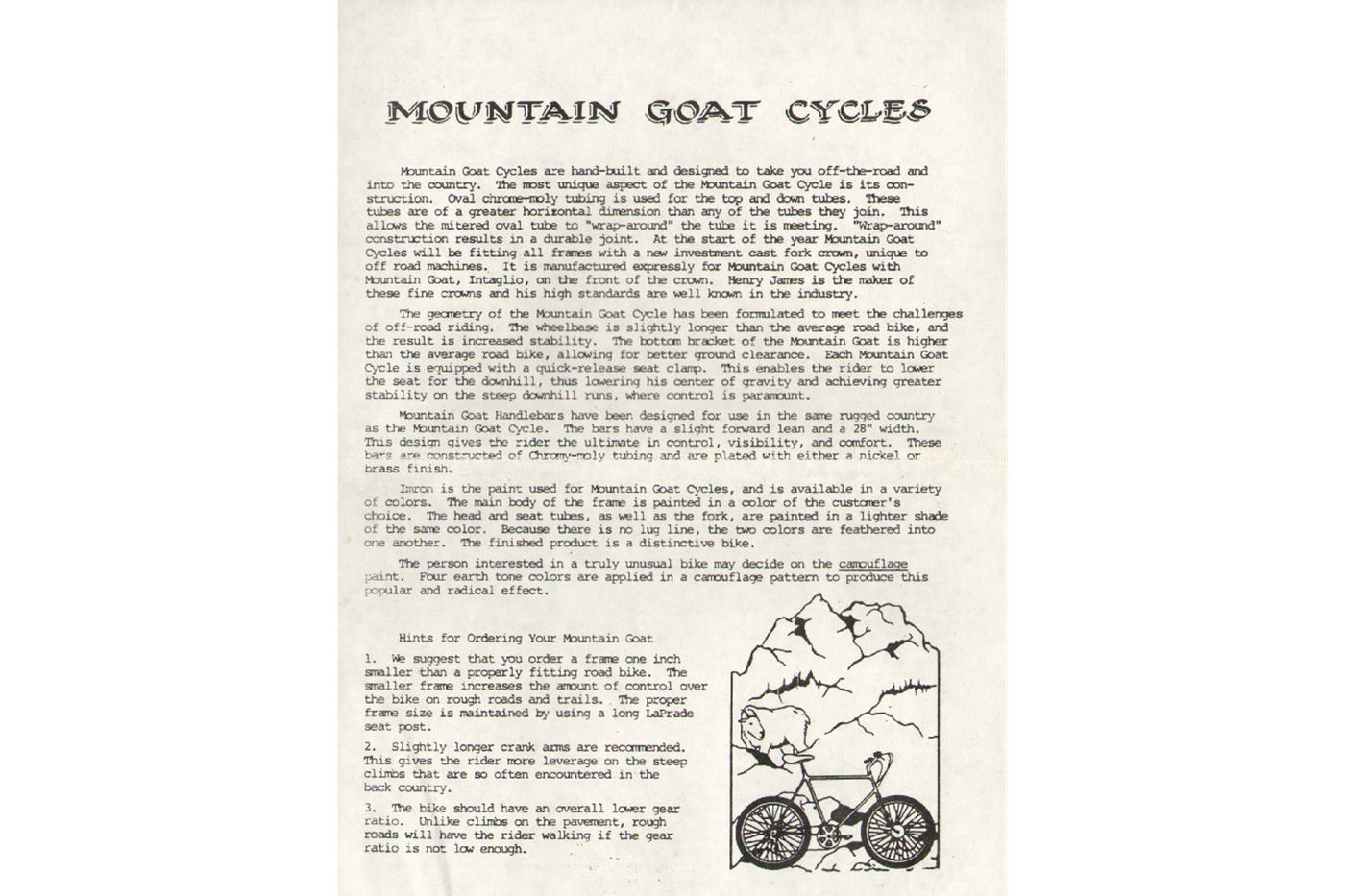 Jeff continued to pursue his framebuilding passion project, building mostly road bikes. In the late 70s and early 80s, Jeff began designing mountain bikes. In 1981 at Interbike in Anaheim, California, three mountain bikes were displayed: Tom Ritchey/Gary Fisher “MountainBikes”, Victor Vicente, and Jeff Lindsay. Yet, rather than using his W.J. Lindsay name, he displayed one of the first Mountain Goat bikes. Similar to what would become the Deluxe, this bike had an ovalized, flat top tube, a one-piece bar/stem combo, and a beautiful paint job Mountain Goat would be known for, for decades to come. Like the Ritchey Tam I featured, these early Mountain Goats used re-appropriated randonneuring/touring, BMX, and even moto parts. The parts kit on these early bikes included Mafac “four dot” tandem brakes, TA Cyclotourist cranks from France, Suntour touring derailleurs, and Suntour BMX pedals from Japan. Many wheels were made with Phil Wood or Bullseye hubs from the USA, BMX cruiser rims, tires, and spokes while relying on brake levers and cables from Magura, a motorcycle brand. 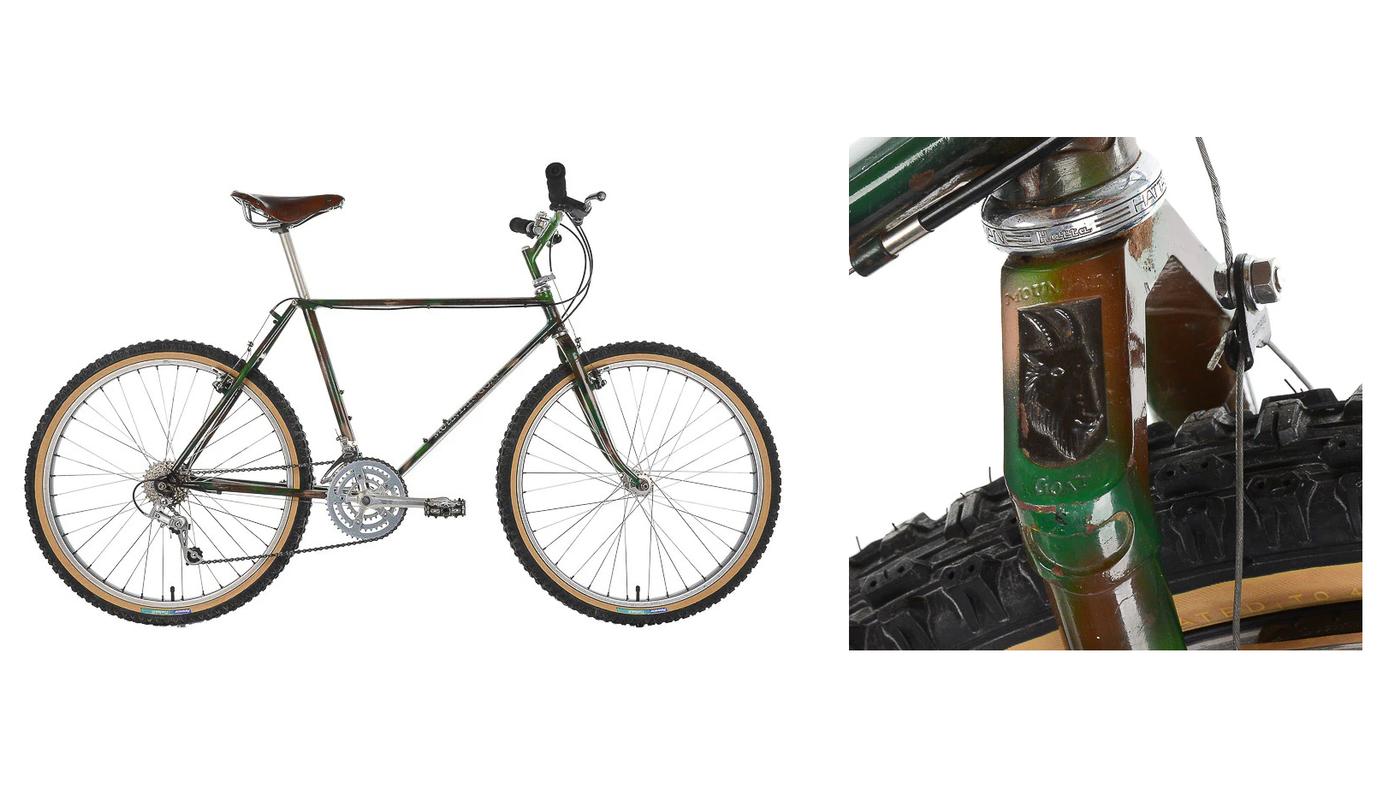 A 1985 Mountain Goat Deluxe from The Pro’s Closet Museum

Once mountain biking kicked off full-steam in the mid-1980s, Jeff developed more Mountain Goat models, utilizing what he dubbed the “RAD Geometry” – or Ride All Day. The Deluxe model utilized this geometry philosophy with slacker angles, a more upright riding position, and stout tubing. Think of the Deluxe as a backcountry bike, whereas Jeff was cooking up something special for racing bikes.

The Whiskeytown Racer, named after an early “downhill” race in California, was the lighter, more aggressive race bike sibling to the Deluxe. Whereas the Deluxe was designed for all-day riding, the Whiskeytown was a race bike, sacrificing comfort for a race-oriented geometry. As for the paint job, Jeff found inspiration for the colors while driving out to the race one year: he saw a Forest Service fire helicopter that was painted bright green with orange stripes and immediately took a liking to this color combo. 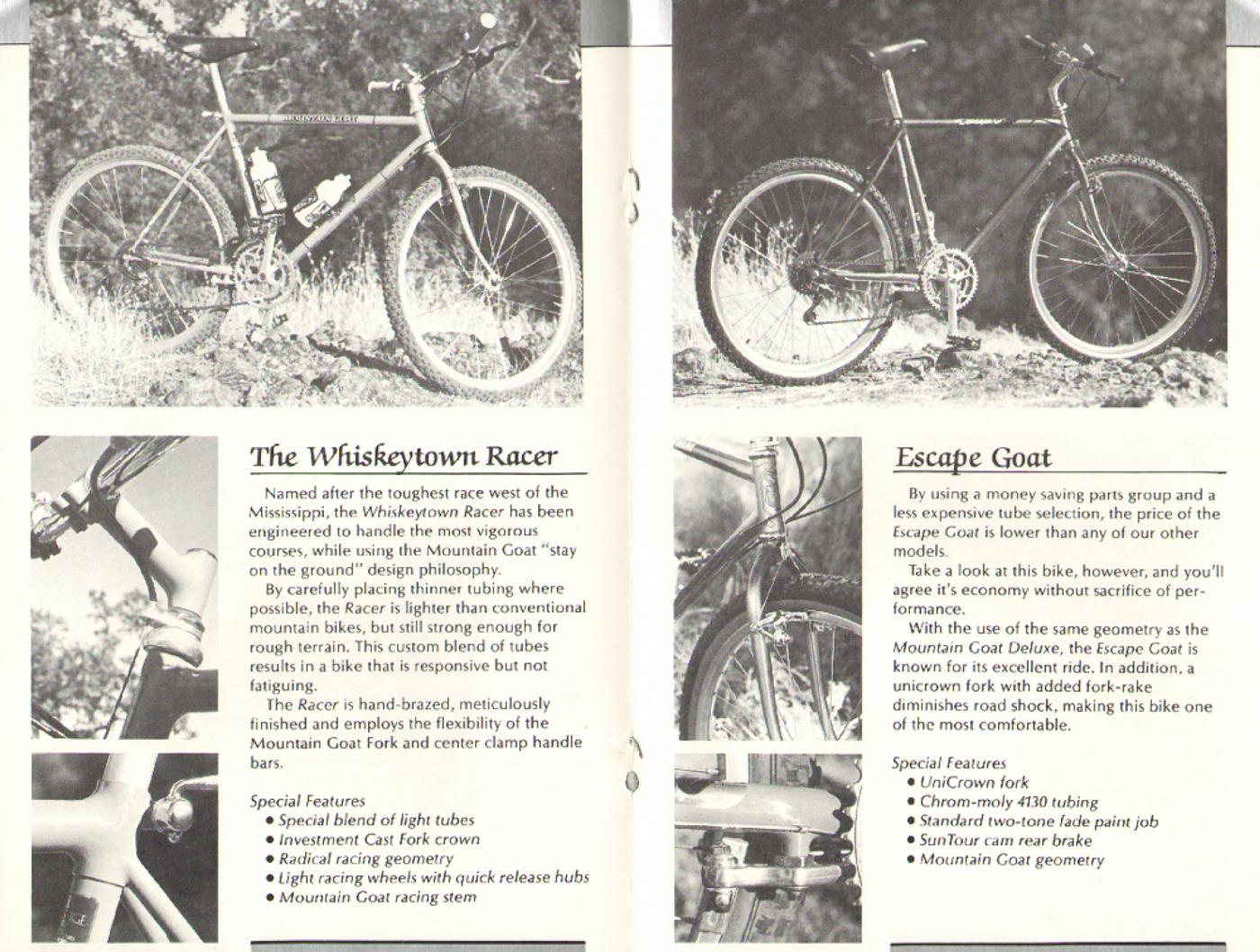 Rounding out the trifecta of 1980s Mountain Goat models was the less expensive, tig-welded, middle-end tubing Escape Goat. This model utilized the RAD geometry of the Deluxe but at a more affordable, tig welded pricepoint. The Escape Goats were all coated in wonderful paint jobs thanks to Russ Pickett of Air Art paint, and marked a sea change for Jeff and his team at Mountain Goat. Around this time, in 1988, Paul Price joined the team, finishing fillets, and picking up tig-welding before Jeff moved Paul to the machine shop. Jeff told Paul he had the mind for machining after Paul’s tig welded stems didn’t pass QC. 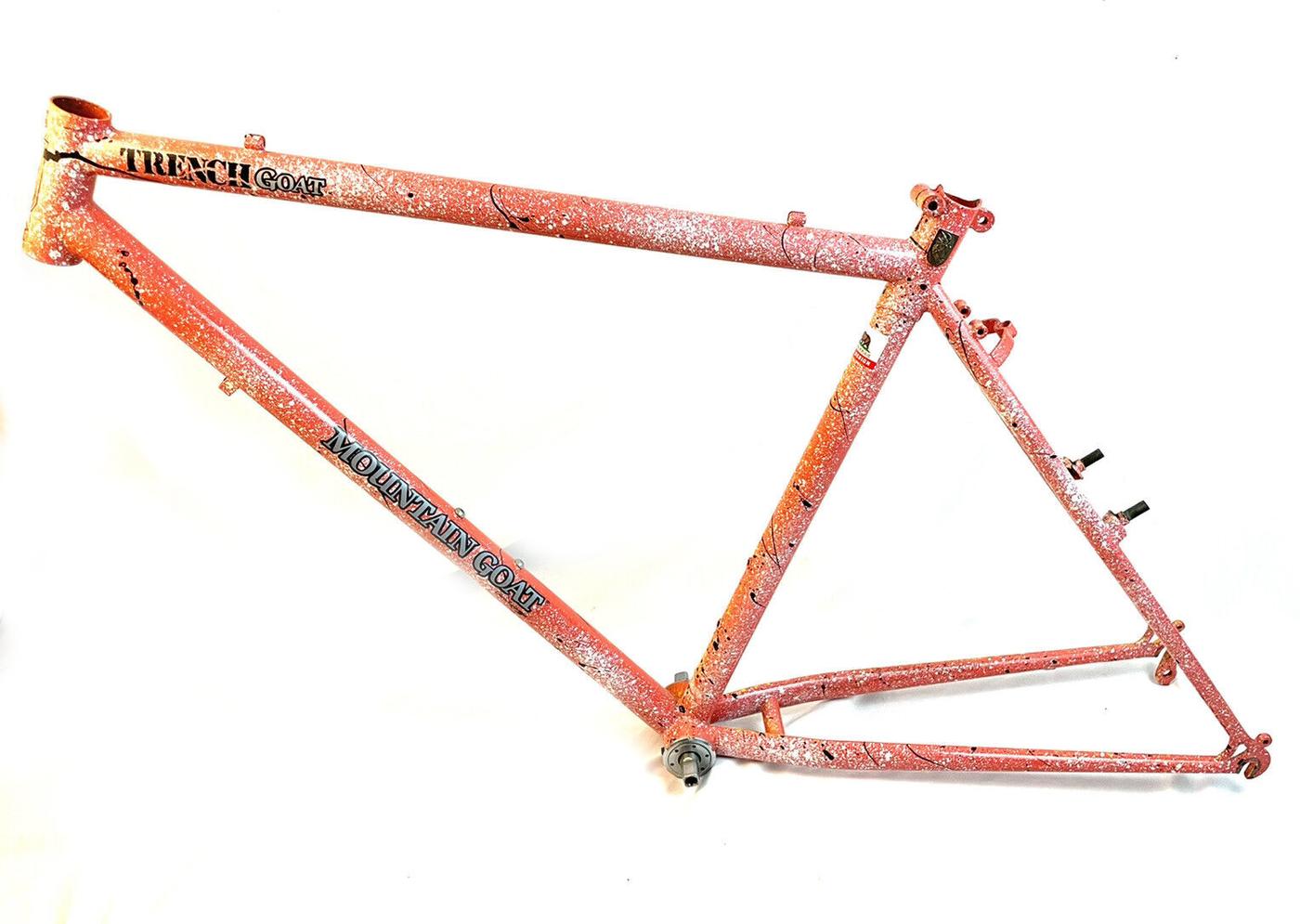 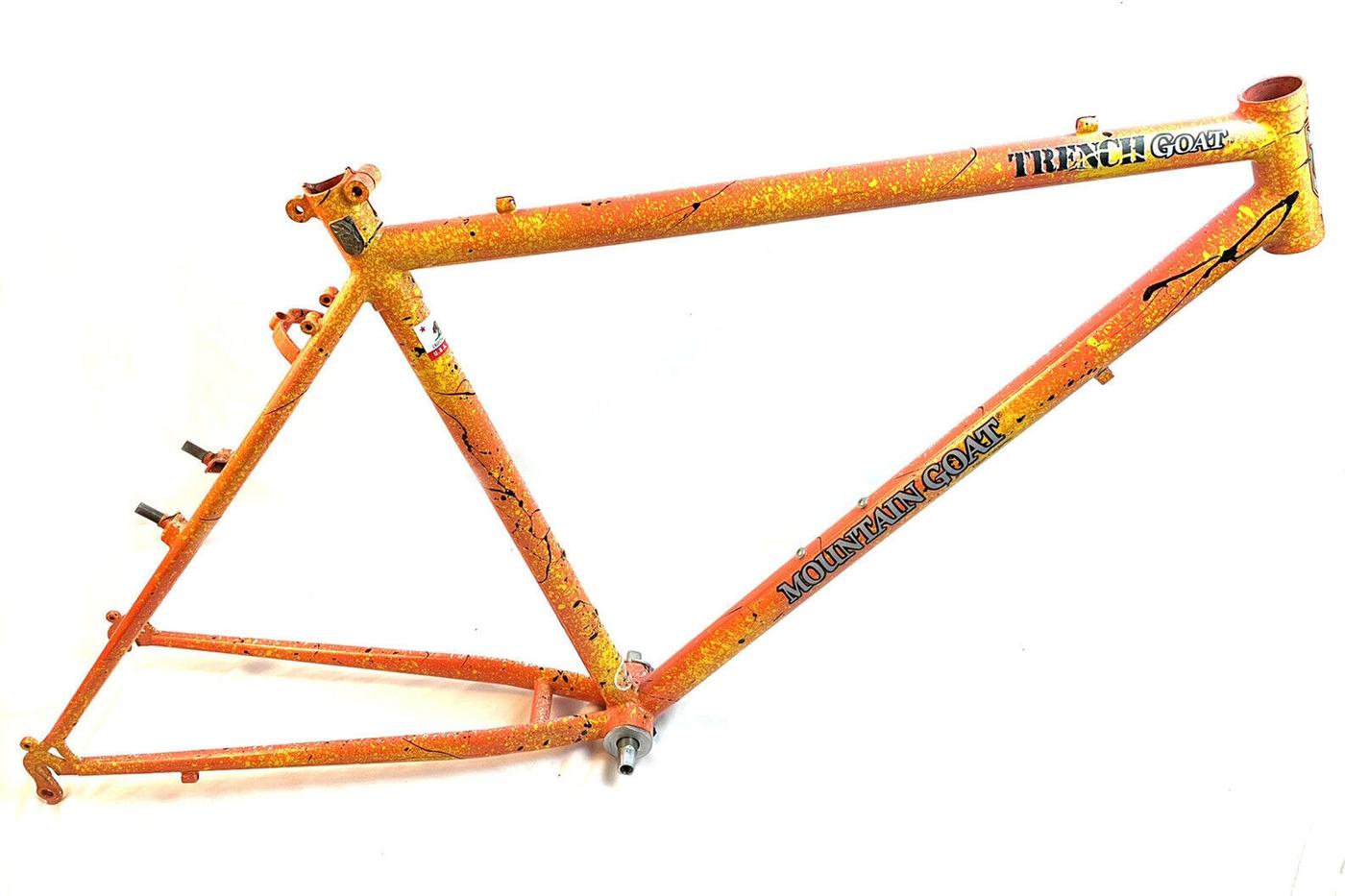 In the late 1980s, the US was abuzz with this new form of cycling, mountain biking. To keep up with the increasing demand, Jeff and the team at Mountain Goat, produced the Trench Goat model. It was designed by Jeff, featured the RAD geometry, but was tig welded overseas. These bikes had a two-tone paint job with one side being salmon colored and the other a yellow/orange tint with splatter.

Jeff Lindsay was inducted into the Mountain Bike Hall of Fame in 1989. He left framebuilding to pursue his passion of glass blowing full-time in 1997. The Whiskeytown Racer was introduced as the higher-performance race-oriented companion to the Mountain Goat Deluxe. Its steel chassis was fillet brazed in the early models such as this while using head tube reinforcement collars (which I have in my collection.) These lugs were intended to brace the head tube of these bikes from impacts suffered during racing. A standard headtube can ovalize from too many impacts, and these lugs were one way to strengthen them. 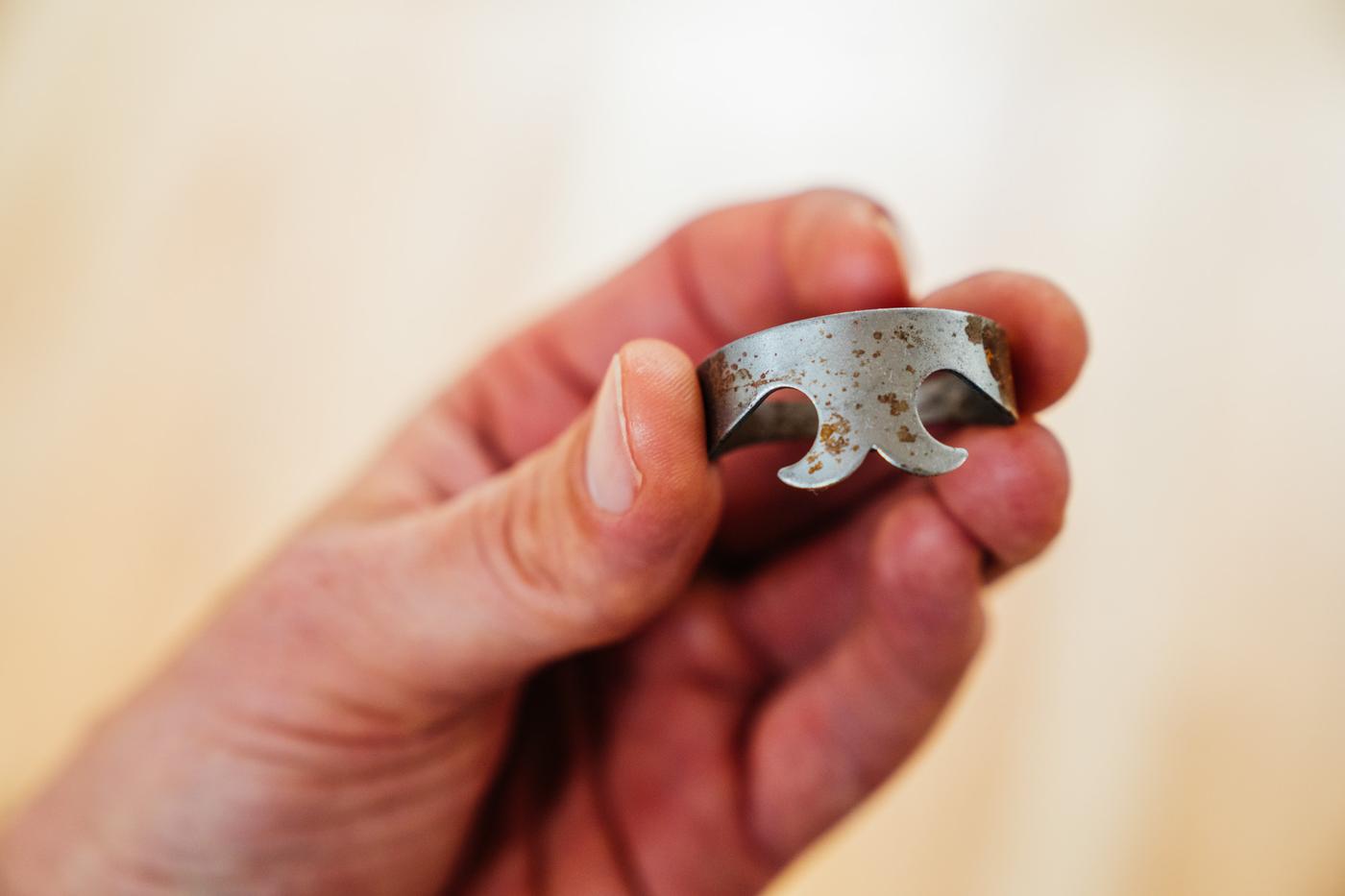 Jeff later switched to tig-welding on the future Whiskeytown bikes.  One of the stand-out features of these early Mountain Goat mountain bikes was the Henry James fork crown with custom Mountain Goat inlays, cast by Mike Cherney. 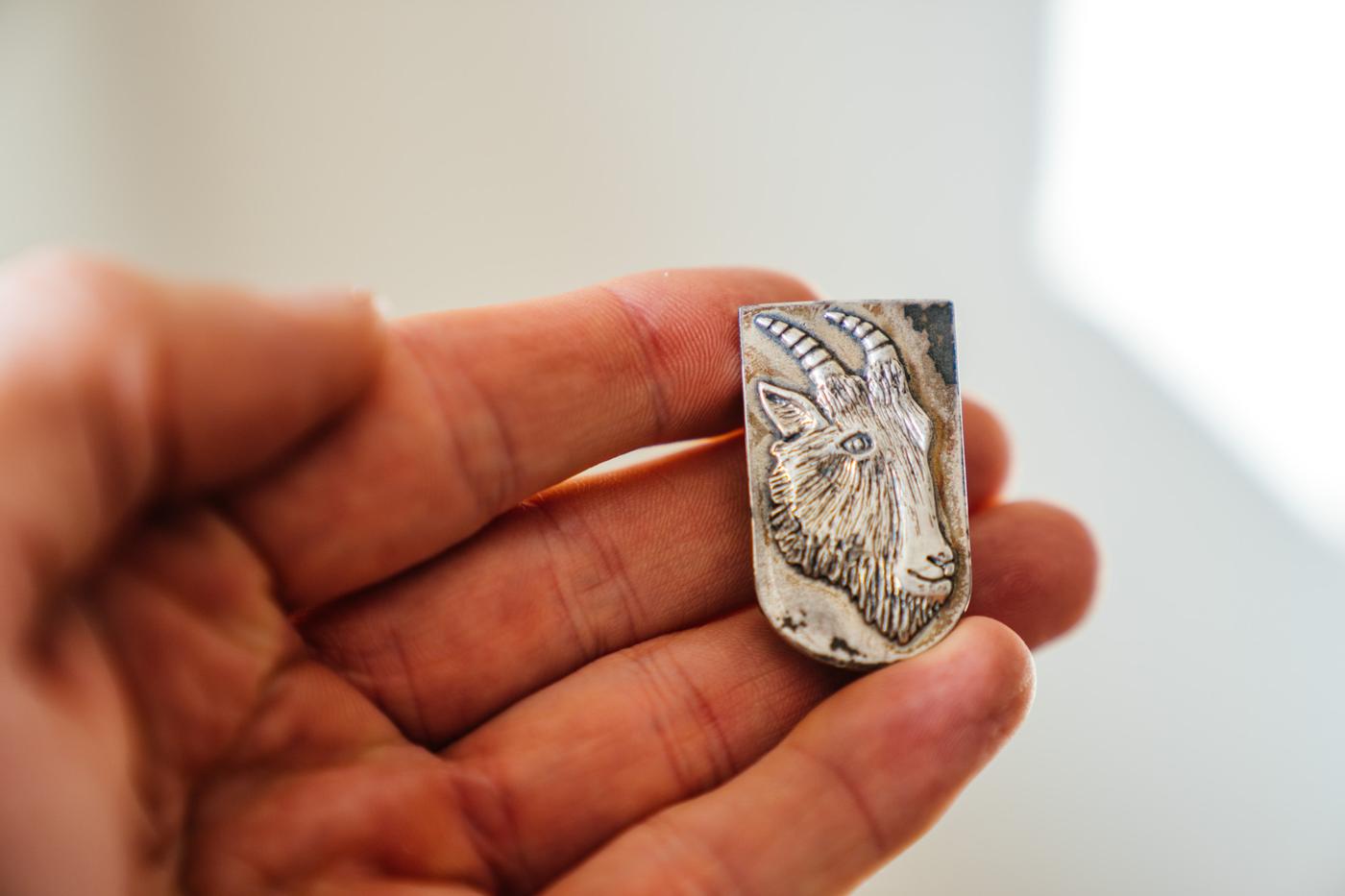 Mike also made custom Mountain Goat bolo ties back then. I’ve got one, too! Thanks, Mike! 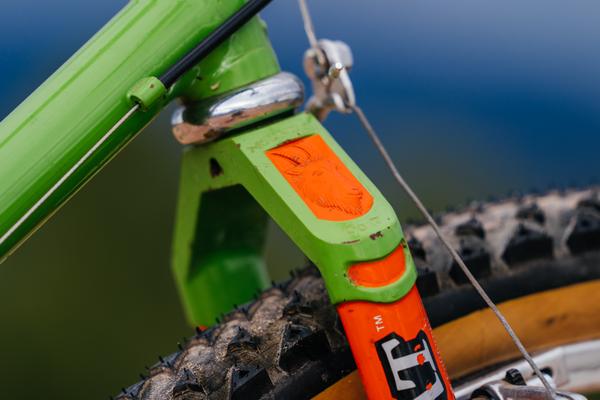 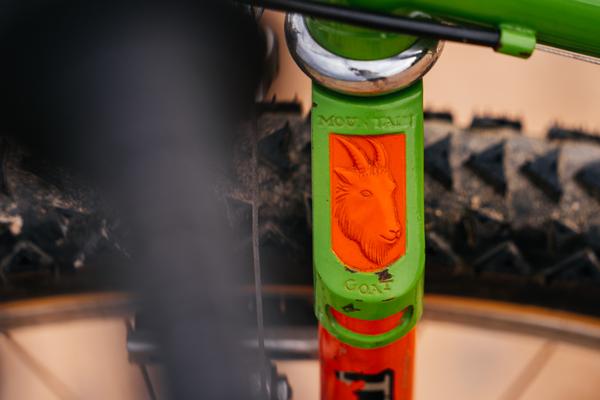 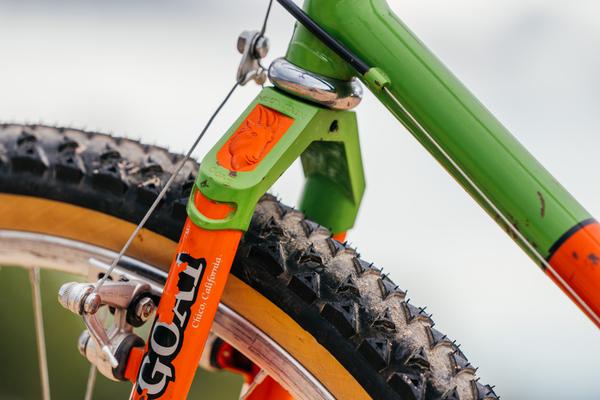 The survey is still out on whether or not these fork crowns were prone to breaking. Some collectors I talk to say, “don’t you dare ride that fork!” while others have said, “it’s steel! ride it!” I ride this bike but try to be as smooth as possible. As with any older frame, inspecting it for cracks or buckling periodically is best. Due to the rarity of this Whiskeytown Racer, I don’t want to add to the patina too much. 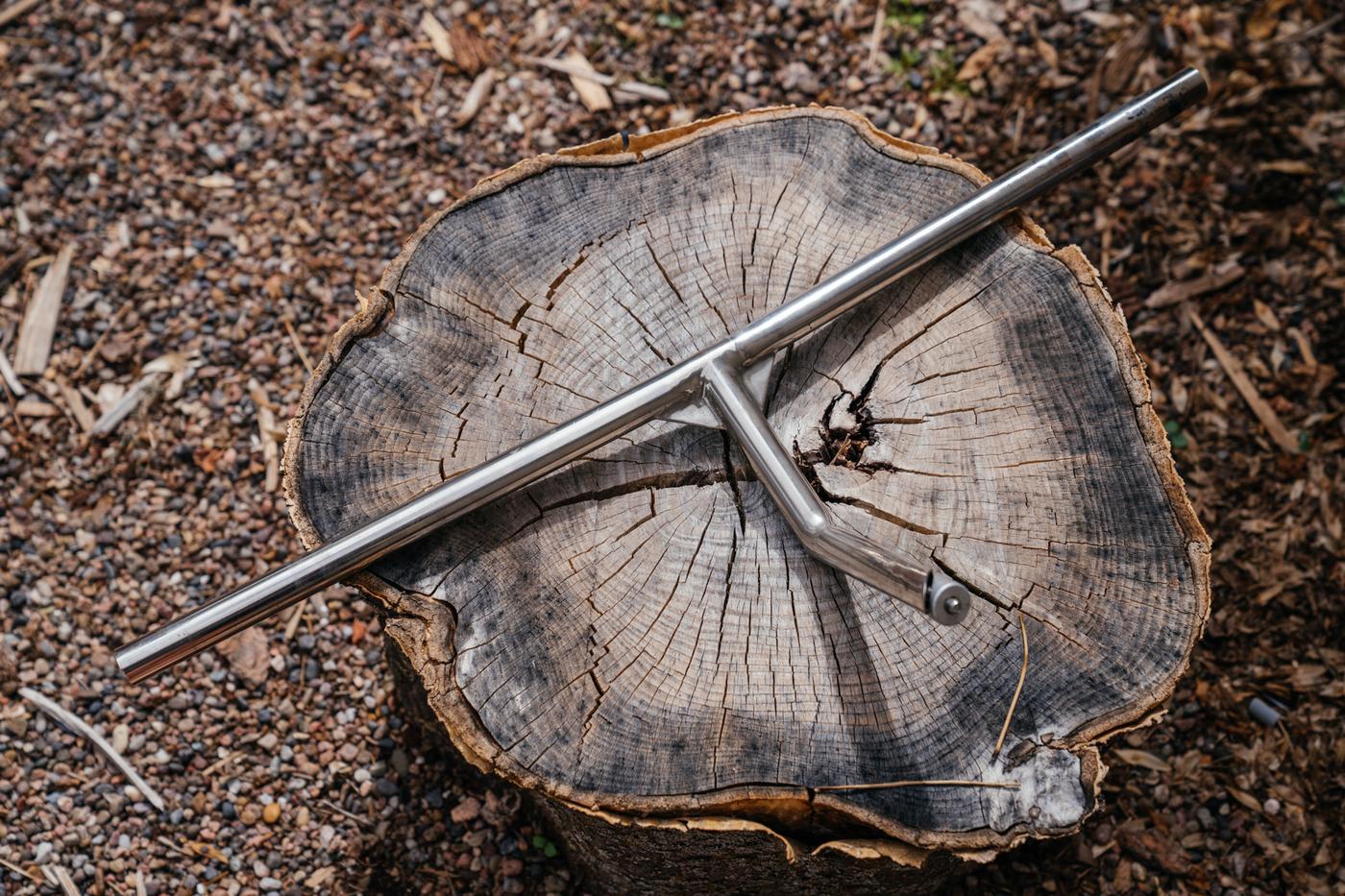 What was indeed prone to breaking are the original one-piece Escape Goat brazed, nickel-plated bar stem combos. These are my personal bars; no, I won’t be riding them as they’re already buckled. 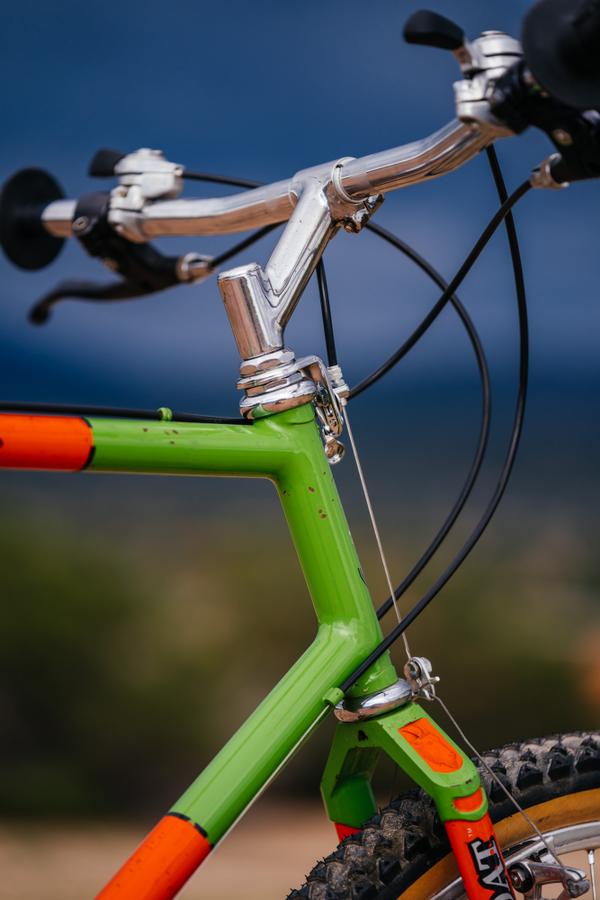 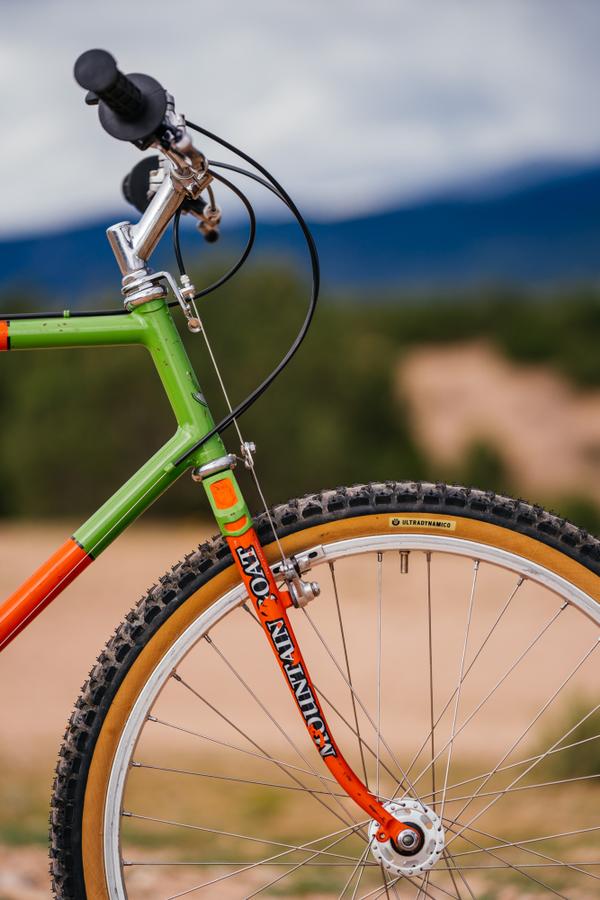 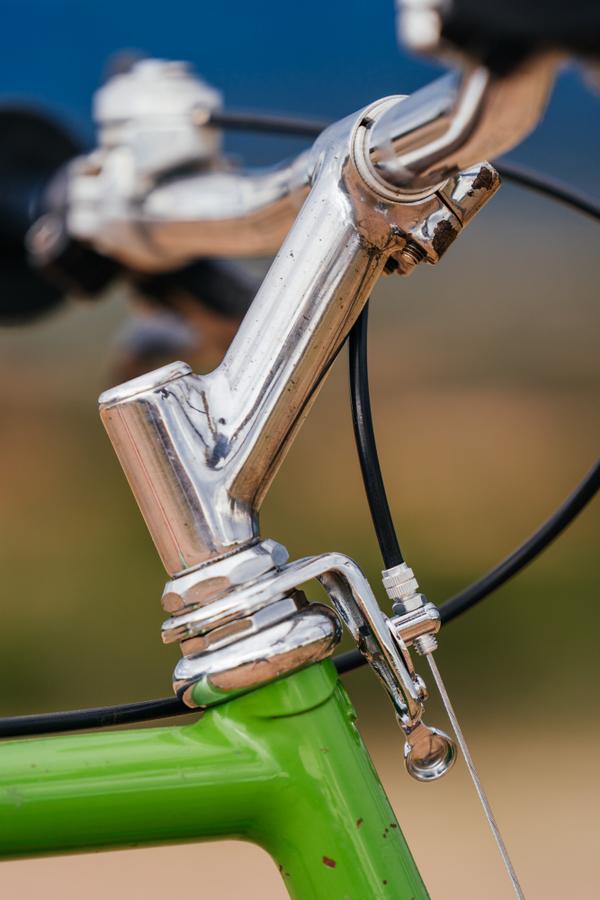 Yet, what came from the one-piece bar failures is this beautiful Mountain Goat Racing Stem. Jeff primarily made short and stubby stems, in direct opposition to what other builders were making in that era. These short, high-rise stems, allowed riders to get further behind the saddle on steep rock roll-ins. Anecdotally speaking, riding this bike in steep terrain is much easier than my Ritchey Tam, which features a very long and low bullmoose. 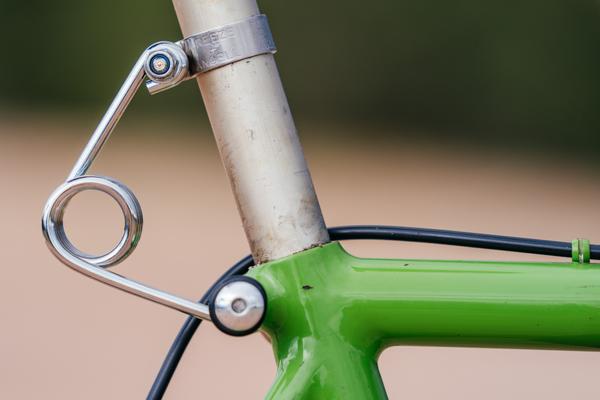 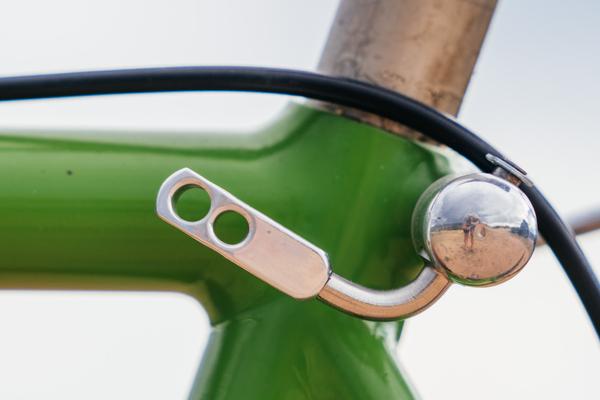 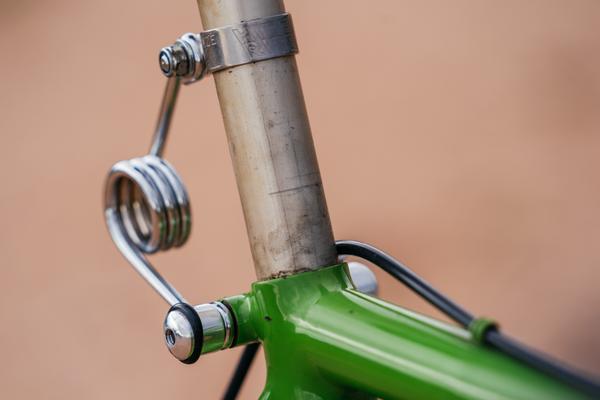 I mentioned that Paul Price from Paul Component began working at Mountain Goat in 1988. Paul started with fillet braze finishing and eventually moved to the CNC shop where Jeff asked Paul to develop some in-house hardware items, mainly QR seat post clamps. Well, you’re looking at one of the early (if not the first) prototype QR collars. Later, Paul would start Paul Component Engineering and maintain his seat collar QR clamp design, making wheel QR, brakes, and more. Thanks to Travis and Paul for this unique piece of history!

At the 2:00 mark in this video, you can hear Jeff talk about Paul’s role at Mountain Goat Cycles: “All you wanted to make were quick-releases. You didn’t care about making bikes for us.” Then, at the 4:20 mark, Paul takes us to the shop where this very bike was sold! I highly suggest watching this video in its entirety for some Chico, California context! 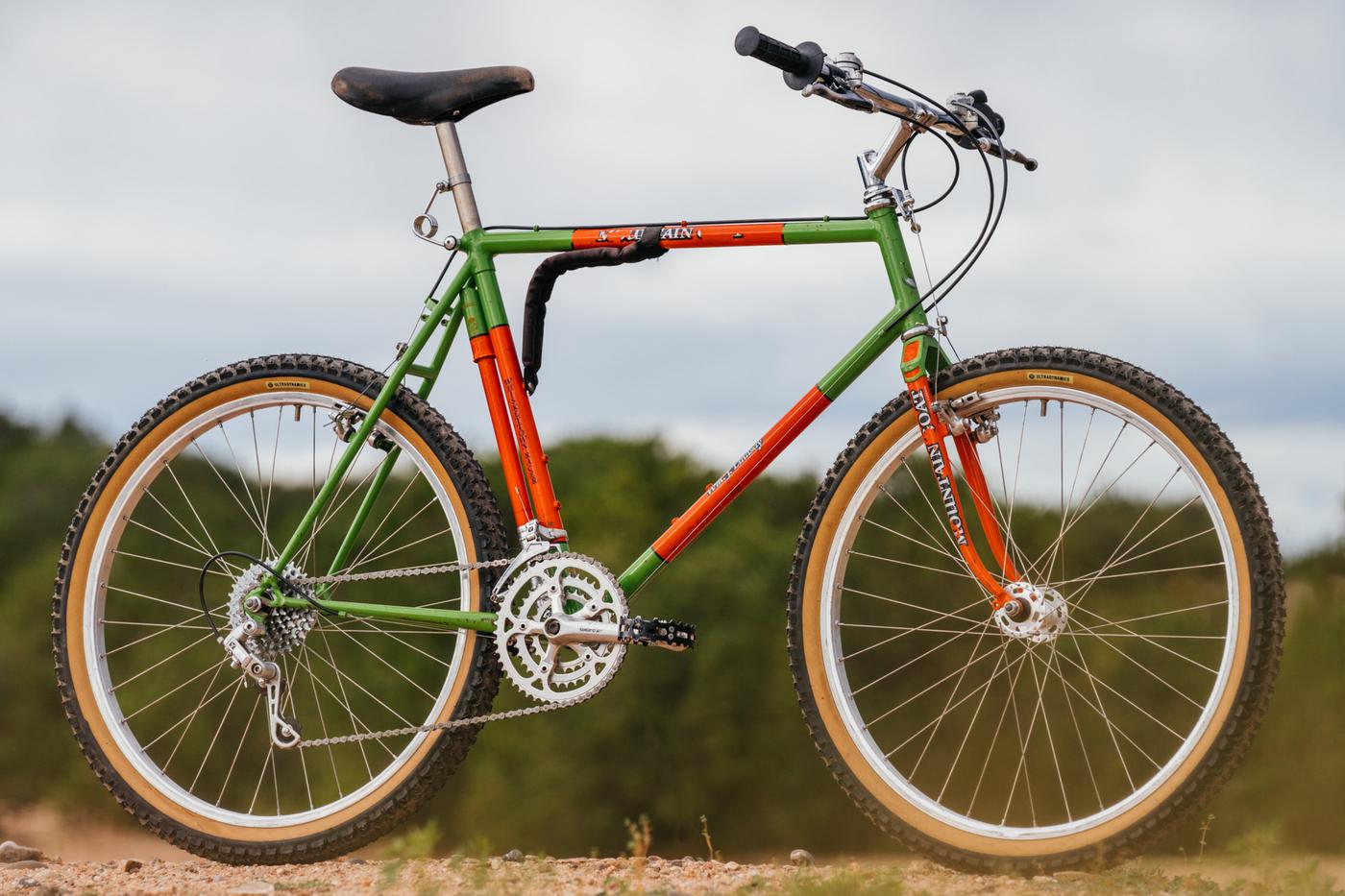 Before Martin’s ownership, this bike was owned by Jeff Archer of First Flight Bikes in Statesville, NC. He documented it with a few different parts for the MOMBAT website. Upon Jeff’s passing in 2016, his collection was sold, and Martin bought the Whiskeytown Racer.  Martin held onto it for a few years until selling it to me in late 2021. I used to go to First Flight Bikes growing up in North Carolina, so I feel a strong connection with this bike. As its current steward, I plan to take great care of it.

Many thanks to Martin from Second Spin Cycles for this bike, the Goat bars, Bailey at Sincere Cycles for the build, Adam Sklar for the Mountain Goat headtube “head tube reinforcement collar”, Travis and Paul from Paul Comp for the prototype seat post QR, and Mike Cherney for the Bolo.