This entry from The Pro’s Closet museum is my personal favorite bike I’ve shot thus far. It’s not often you find such a clean and pristine example of a 1980s Potts Signature, complete with WTB dirt drops, a LD stem, and a full WTB/Suntour Grease Guard kit. Today we’re stoked to feature this gem with words by the Vintage MTB Workshop‘s Tasshi Dennis so read on below for more! 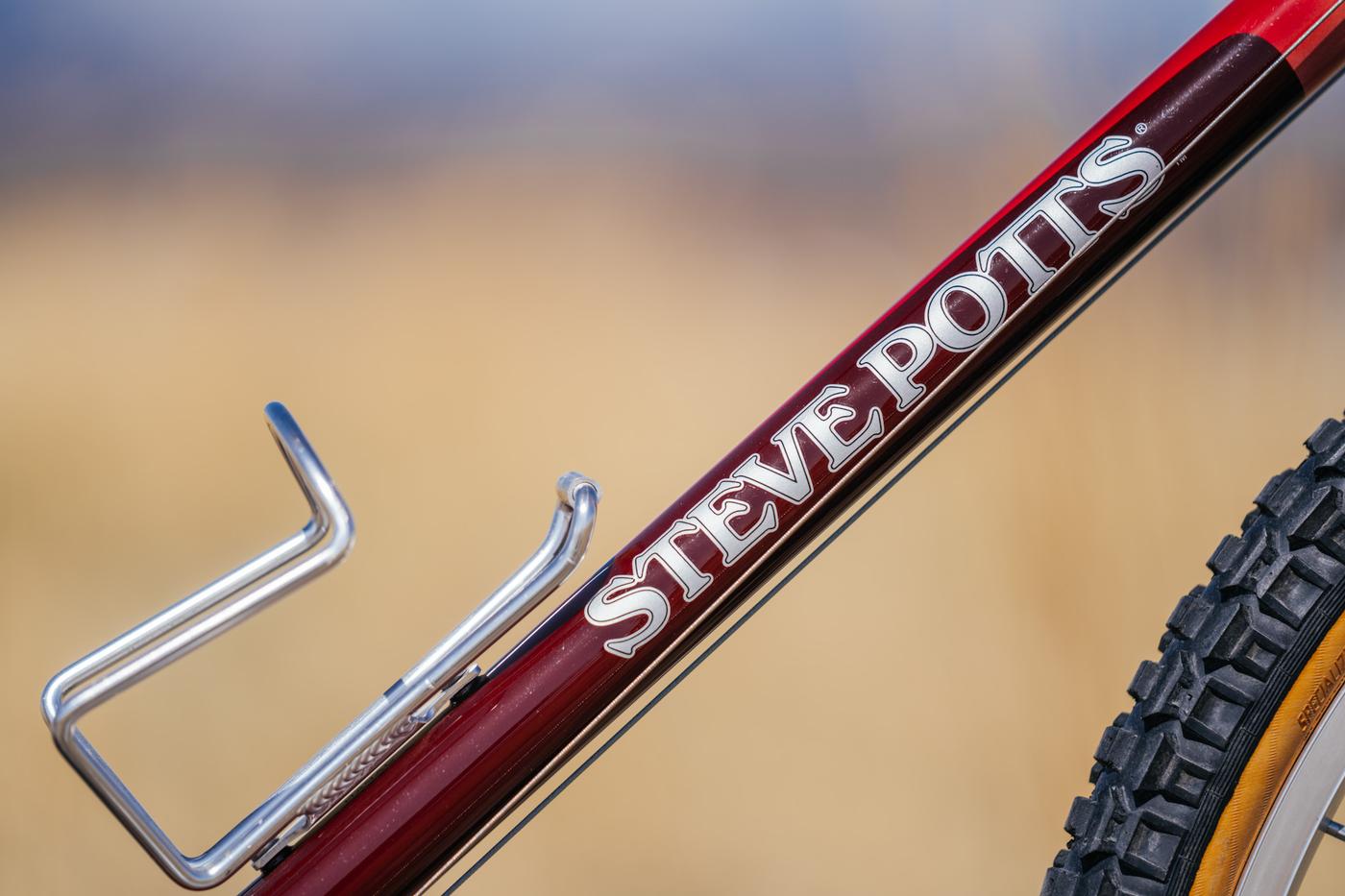 There would appear to be several reasons why the San Francisco Bay Area was fertile ground for the development of the mountain bike. Of course, the first was the nearby mountains, including Mount Tamalpais in Marin, Mount Diablo in the East Bay, and the Santa Cruz Mountains. The second was an affluent population which included entrepreneurs, people in finance, and celebrities who were willing to spend real money on the specialized equipment of a nascent sport. The third and very important ingredient was available engineers, garage tinkerers, and skilled craftsmen who could make this new equipment. Since the early 1980s, Steve Potts from Mill Valley, CA has been one of those very skilled craftsmen.

For the better part of his first decade of frame building, Steve’s construction method was fillet brazing with brass, which required painstaking hand finishing to obtain the smooth joints seen throughout this 1987 Signature frame. As the size of a fillet increases, so does the demands on the finishing, and Steve was responsible for some of the largest and most graceful fillets in the industry. A look at the back side of the fork crown shows this well. 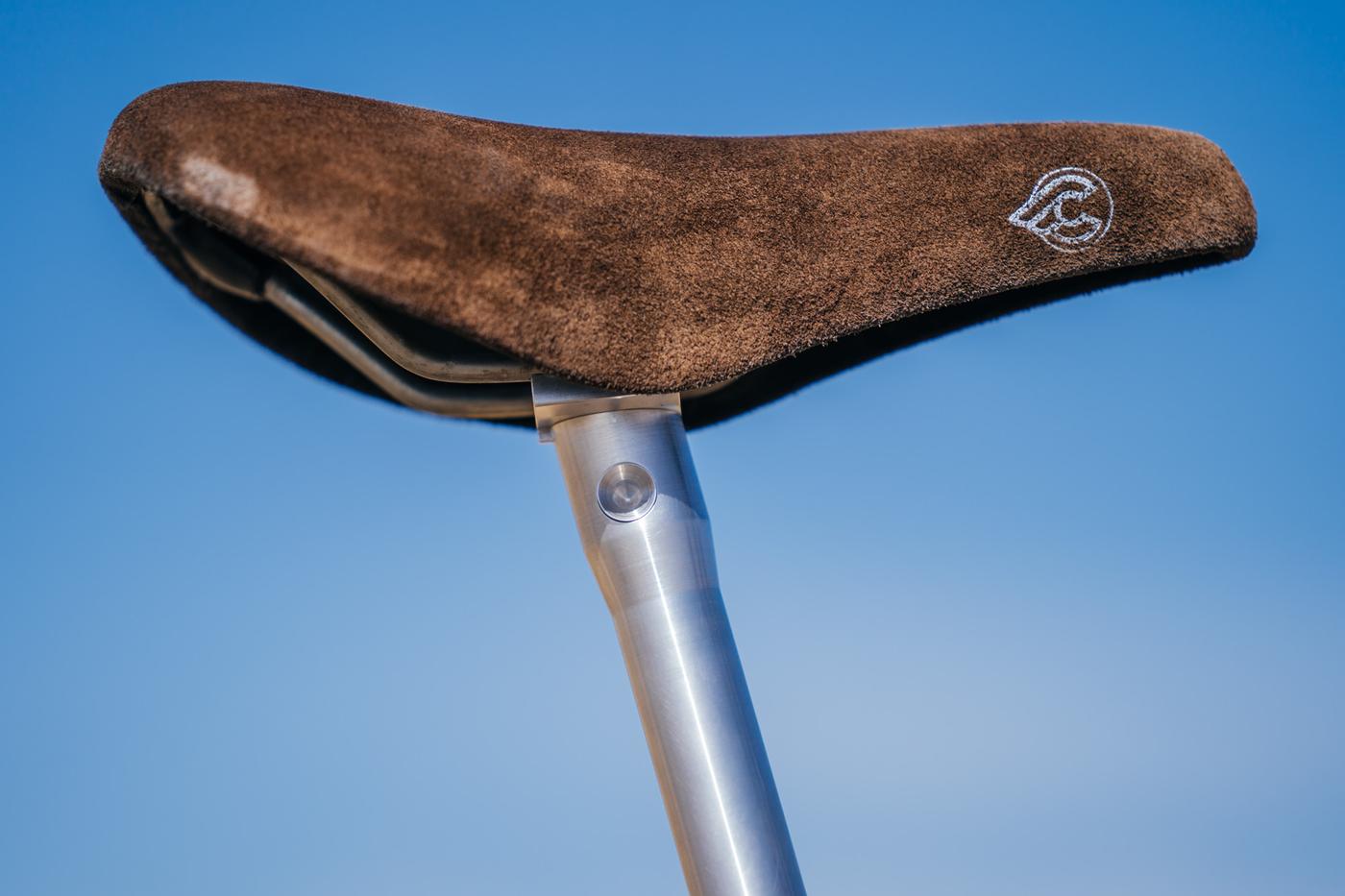 One might be inclined to think that this level of craftsmanship was limited to a select number of the frames Steve produced, but he was incredibly prolific as a custom builder. This industriousness inspired the nicknames “Steve Potts – The Machine” and “Stevie Wonder.” Looking back even today, Steve shudders to think how much time and effort went into creating these early frames and the physical toll it took on this body. As well, Steve often did his own paint work as well as that for other builders, exposing himself to nasty chemicals. In short, frame building is not a glamorous profession! 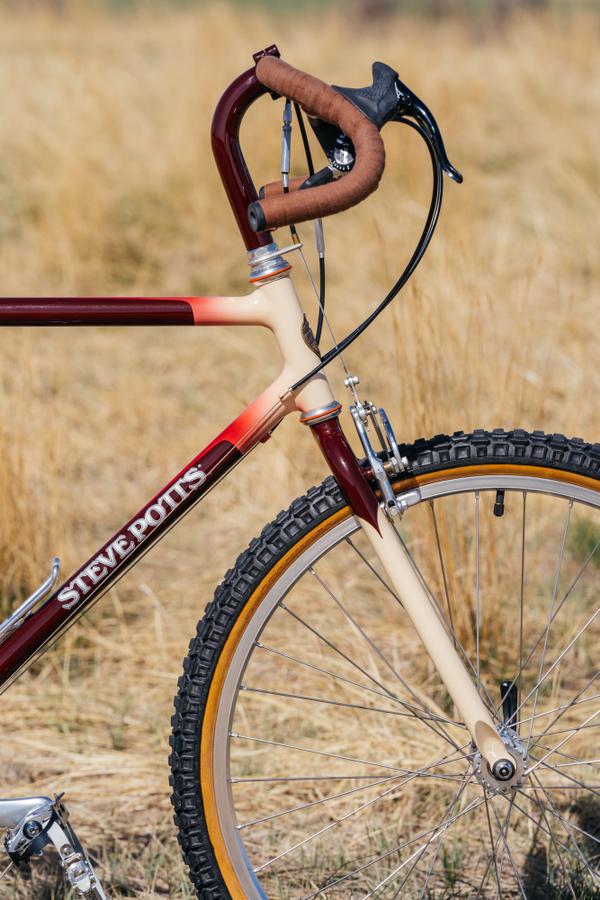 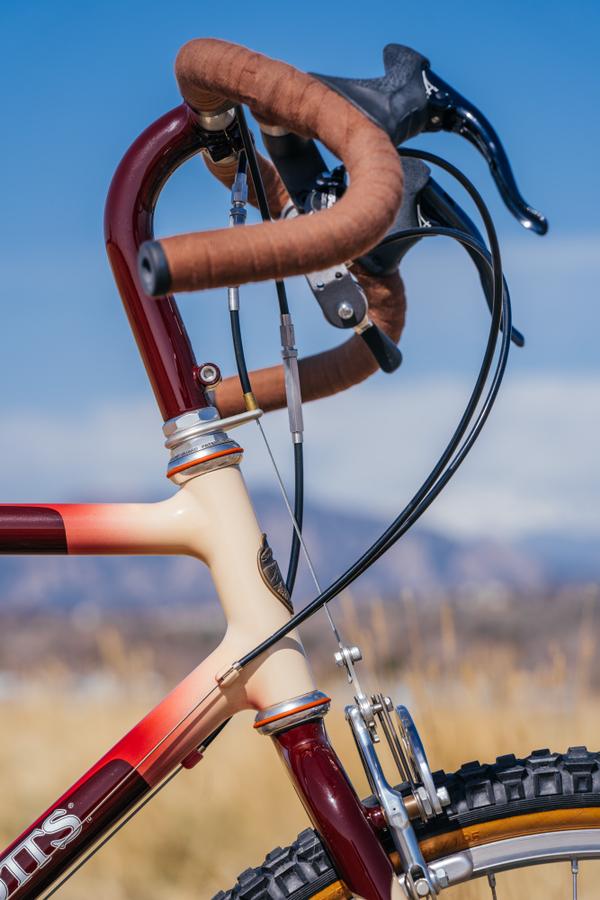 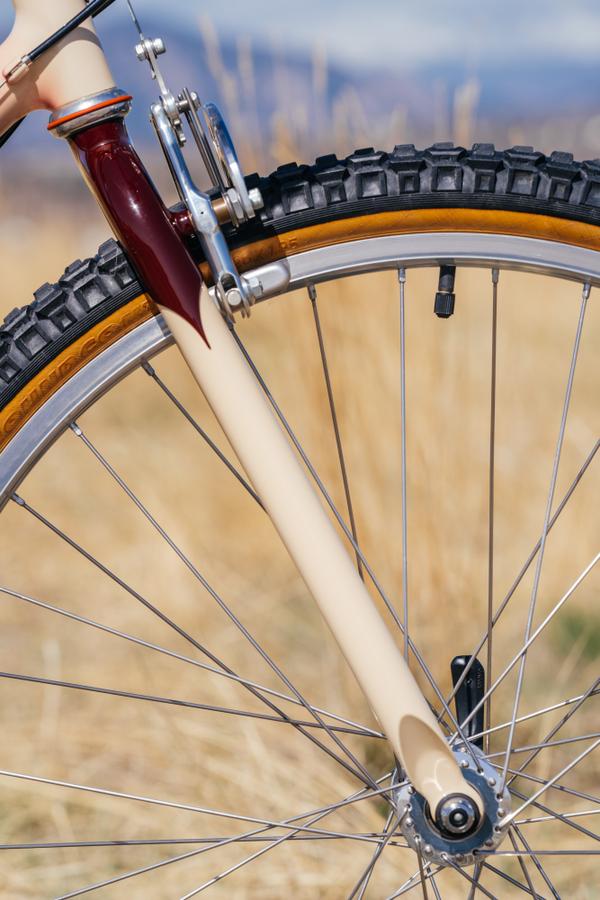 Despite these challenges, Steve produced thousands of custom frames. This Signature is a prime example of the best features found on these premium bikes, including a Type II fork, off-road drop bar setup, Imron paint, and a full complement of classic parts from Wilderness Trail Bikes (WTB). Close friend and aluminum mountain bike pioneer Charlie Cunningham had been responsible for developing many of the innovations found on this bike, but it was Steve’s craftsmanship that perfected their execution. 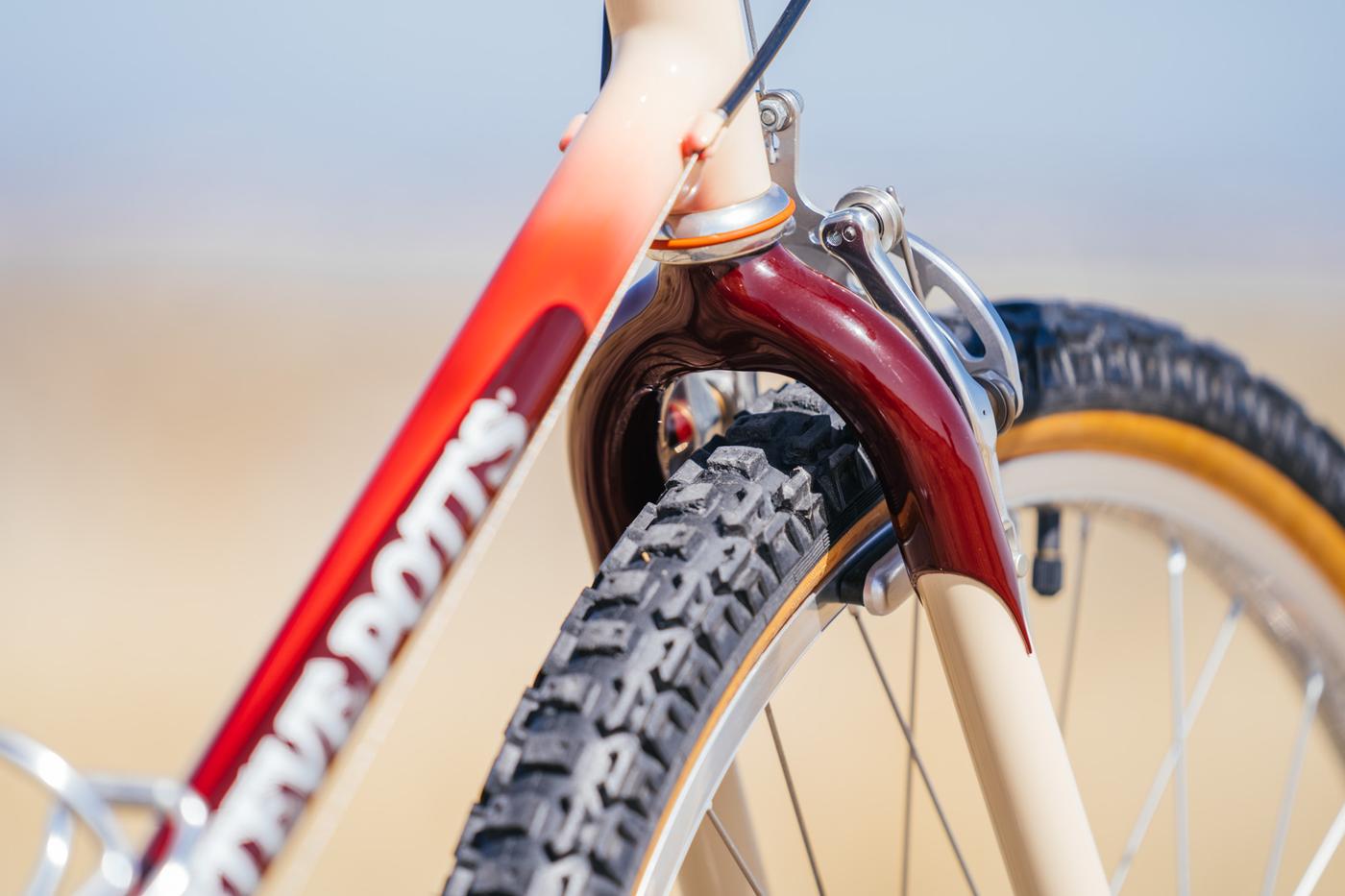 For example, Charlie designed the Type II fork to have an ultra-stiff crown to which the rollercam brakes would be mounted, but very thin blades for a compliant ride. To get those blades, one-inch diameter double-butted Ishiwata toptubes were cut in the middle so the fork ends were just 0.7 mm thick where the dropouts attach. Steve then built-up generous fillets so everything flowed smoothly into the steerer, with scallops on the ends of the crowns and at the dropouts for more artistic flare. 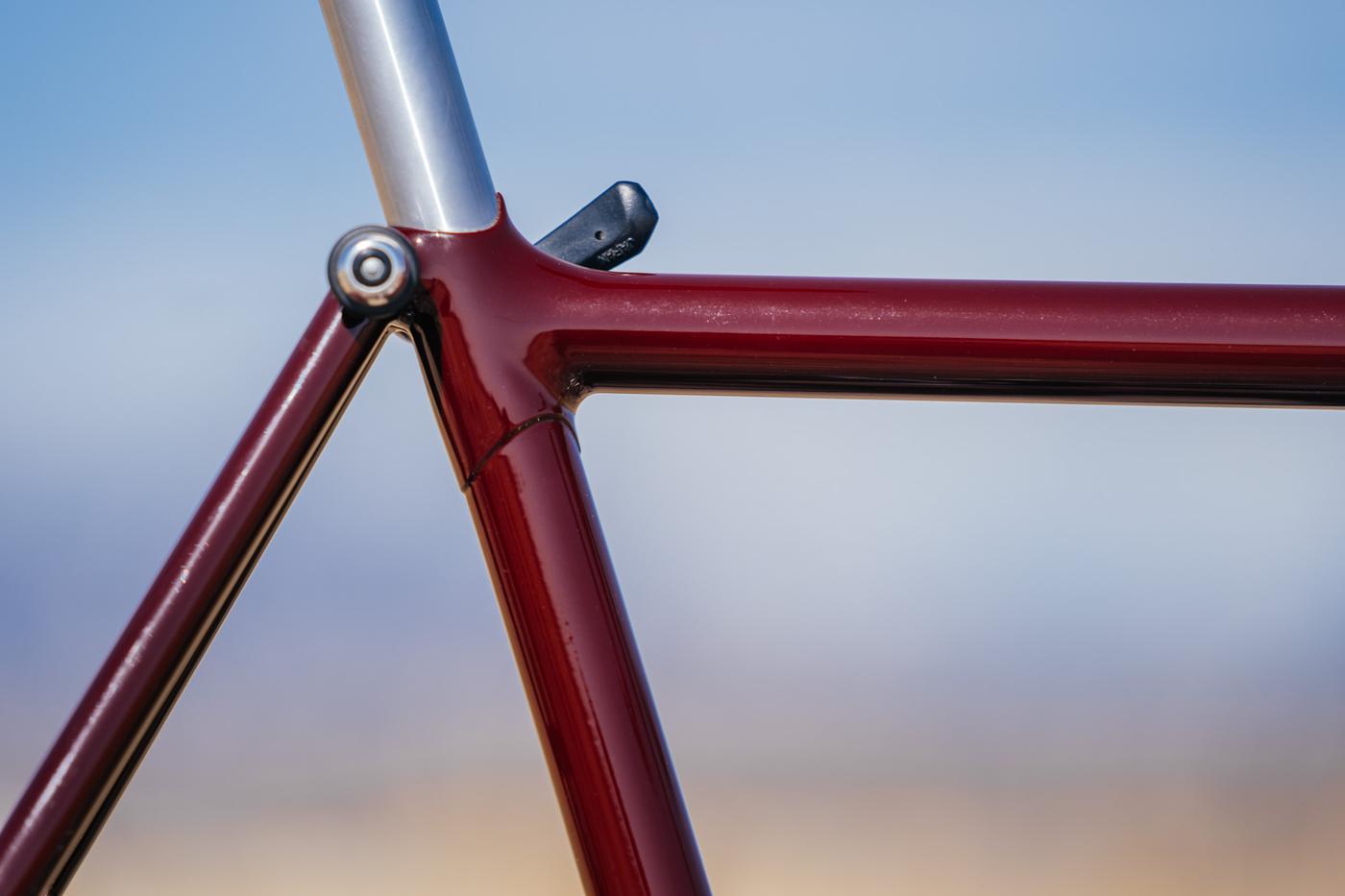 Construction of the frame is equally elegant, with points at the top and bottom of the seat collar and a fastback seatstay attachment. The seattube is ovalized where it joins the bottom bracket shell to enhance side-to-side rigidity and finished off with generous fillets that melt everything together seamlessly. The final finish is Imron paint which has long since been banned by the EPA for its environmental hazards but it unmatched in the way it would flow. The scheme is a classic Steve Potts design topped off with a cast bronze headbadge which features Mount Tamalpais rising above Mill Valley. 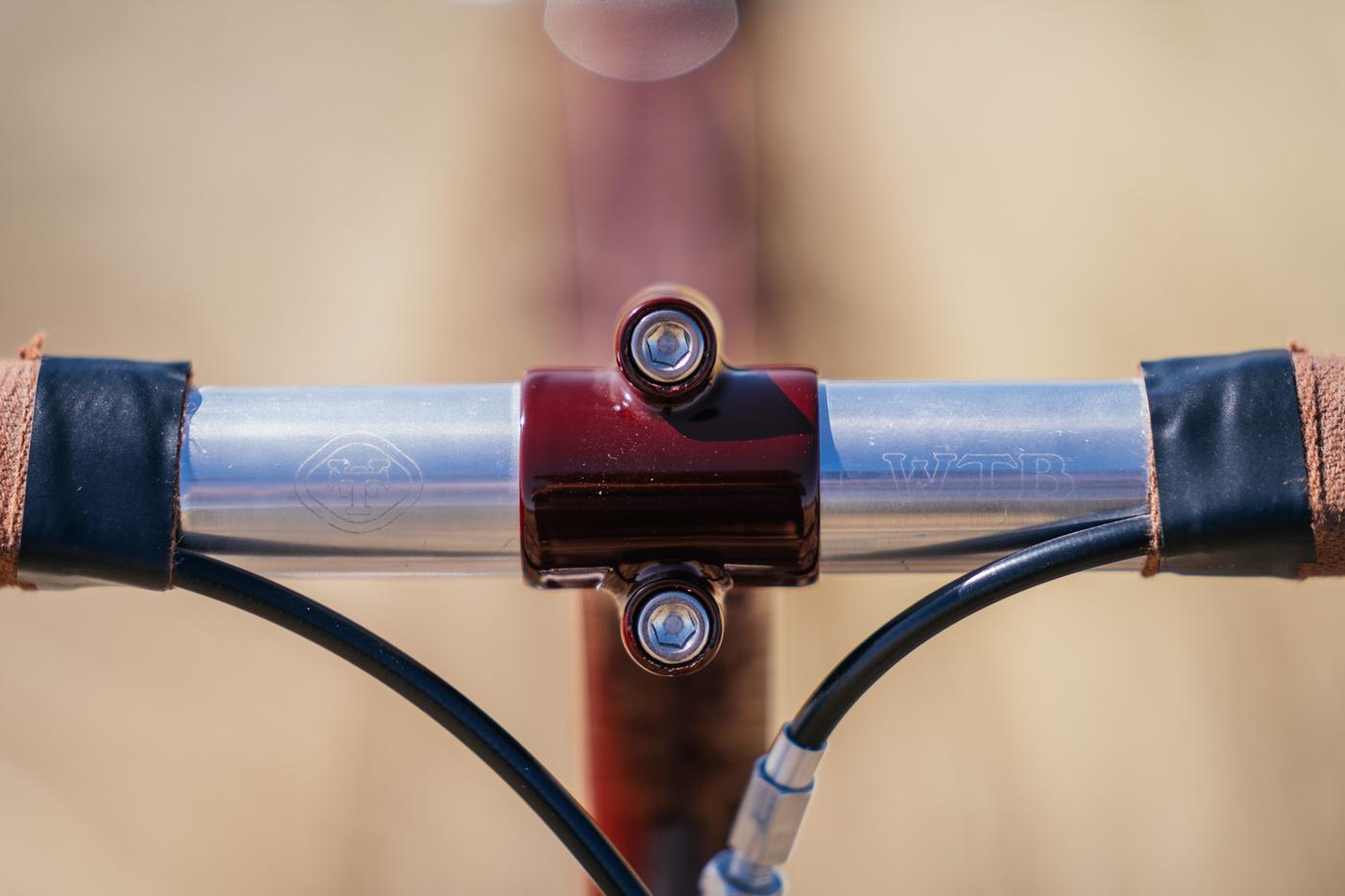 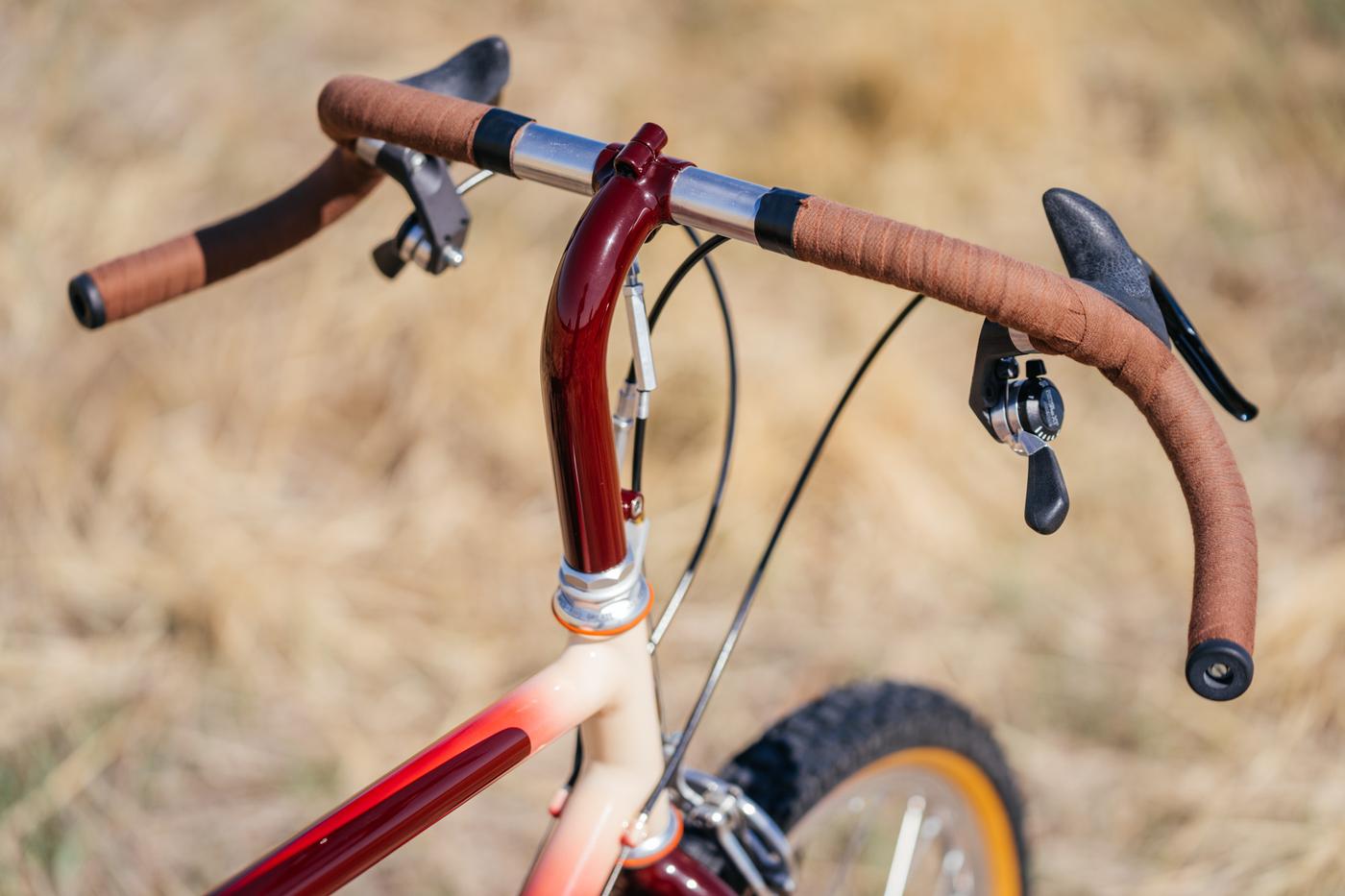 People might be quick to identify the flared drop bars as typical of gravel bikes today, but these were originally intended to be use on mountain bikes for mountain biking. Beginning with Charlie’s first bike in 1979, he had been cold-setting Cinelli Giro D’Italia bars with flared ends to provide better leverage and better wrist clearance during technical riding. By the time this Signature bike was constructed, WTB had their RM-2 bars made by Nitto of Japan to their off-road specifications. As gravel bike riders know today, there is a secure feeling in the drops when it gets rough, and Charlie knew this from the beginning when others wrote them off. Although Charlie was fond of bar-end shifters from Campagnolo and Suntour, it was Steve along with WTB co-founder Mark Slate that really focused on developing the Multi-Mount shift adaptors for drop bars. 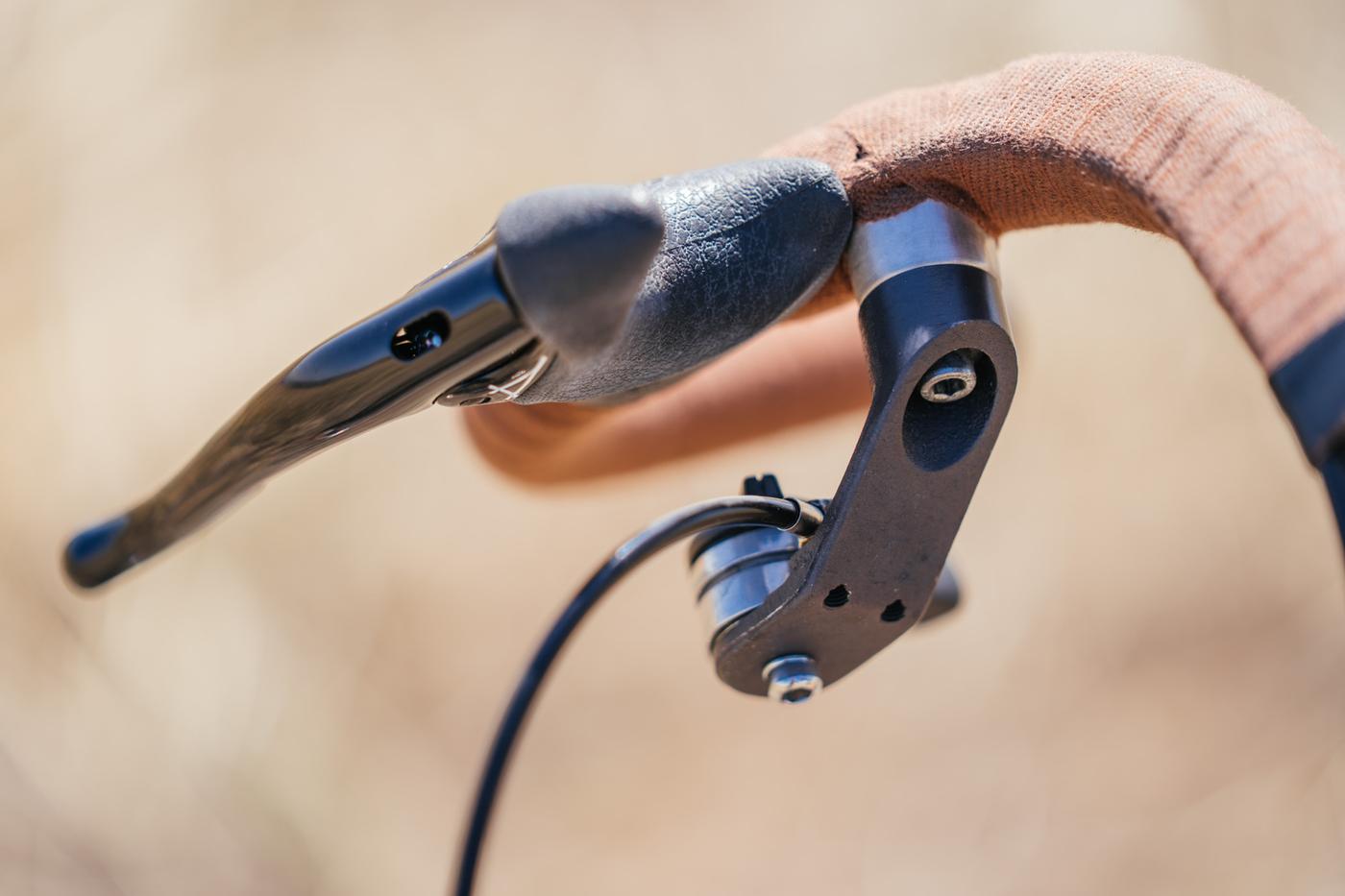 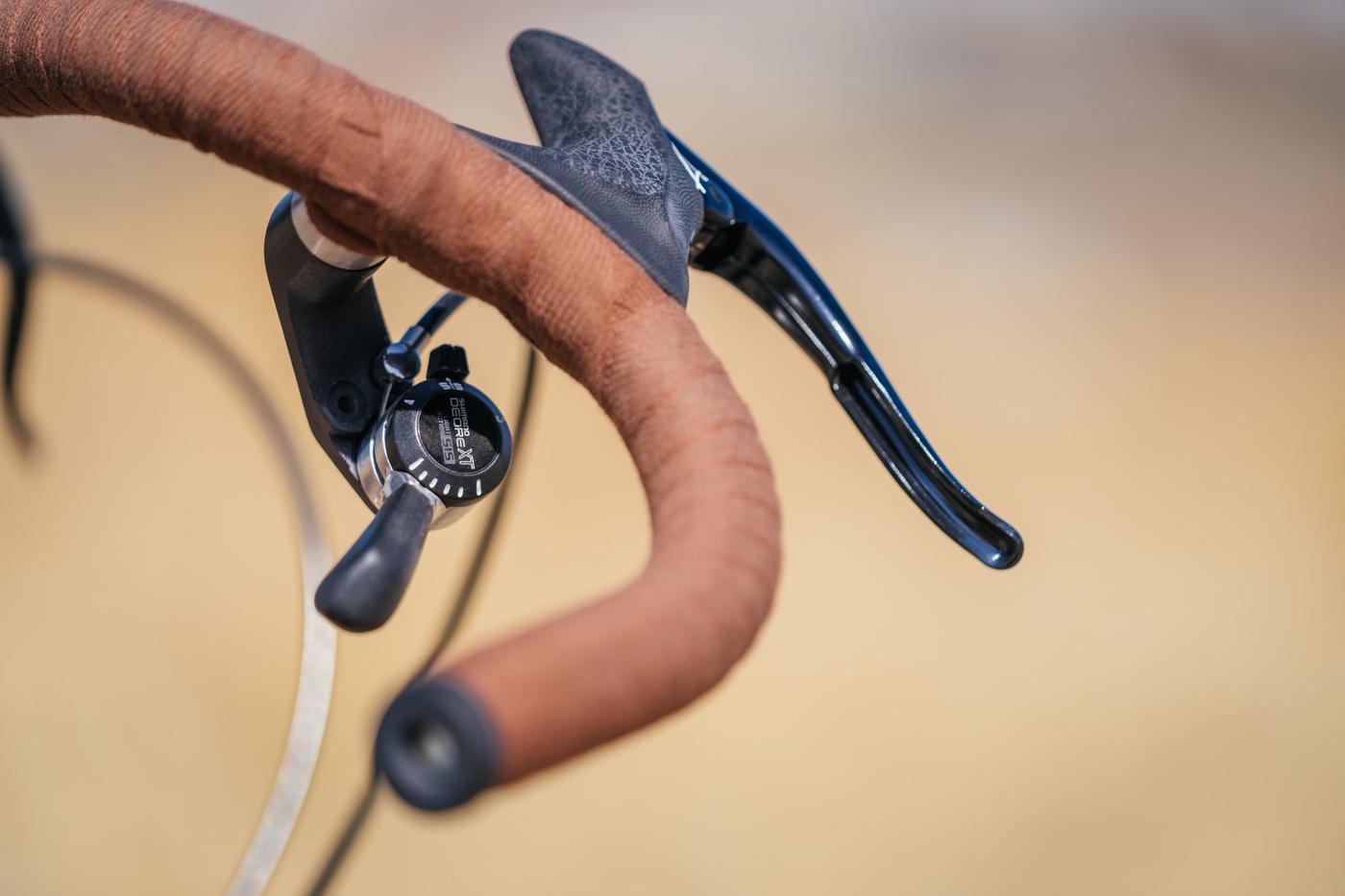 These put thumbshifters in just the right spot, so you didn’t have to move your hands between braking and shifting positions. For drop bars to work on technical terrain, they need to be positioned way up, otherwise, you’re left staring at the front tire like on a road bike and not down the trail. Essentially, you want the drop bar riding position to mimic the same riding position as a flat bar. To do this, you need an unusual-looking stem like this gooseneck made by Steve from mandrel-bent tubing. Overall, the visual appearance of the drop bar setup clashes with what we have come to expect as derived from motorcycles, but it all makes sense after you ride it. 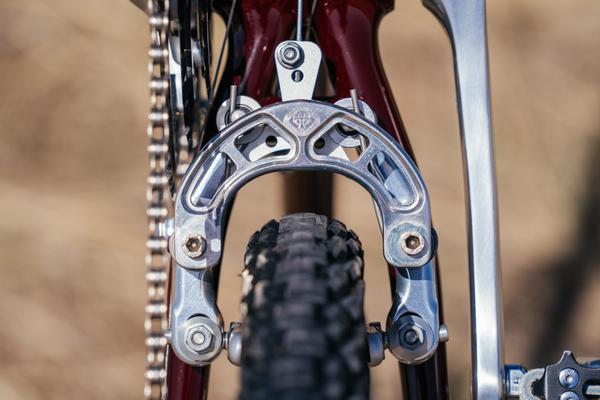 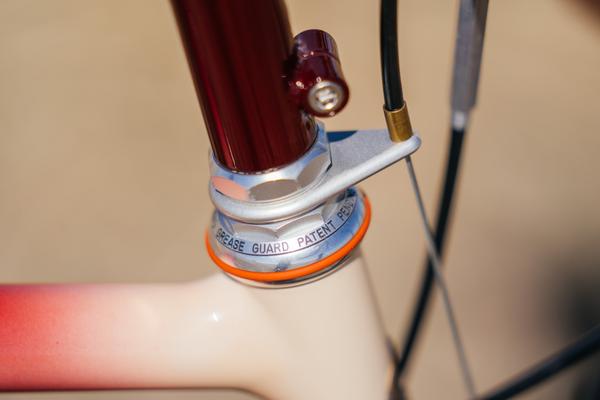 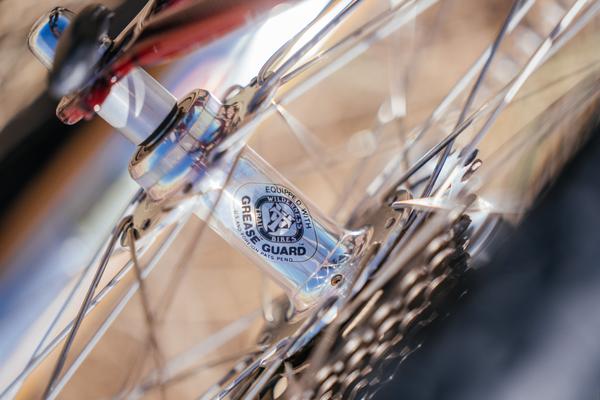 As a co-founder of WTB, the bikes Steve made were designed for and adorned with WTB’s jewelry-like parts. Contrary to many shrewd business models today, these parts were designed to last forever. While this is one way to eventually put yourself out of business, classic WTB parts gained a loyal following for their beauty, function, longevity, and serviceability. As you can imagine, they are highly collectible today. A central feature to moving parts was the Grease Guard system designed by Charlie Cunningham in which integral ports allowed new grease to be pumped into bearings while the old grease was automatically purged out. On this bike, Grease Guard is featured on the cartridge bearing bottom bracket, WTB/Chris King headset, Speedmaster Rollercam brakes, and cartridge bearing hubs. Besides the previously mentioned Multi-Mounts and RM-2 drop bars, other WTB parts on this bike include the Fixed Angle Seatpost and Toe Flips on the pedals. It must also be mentioned that the legendary Specialized Ground Control tires were designed by Charlie Cunningham as the first tire which accounted for how a bike handles off-road while leaning into corners. Prior to this there wasn’t a concept of transition or edge knobs for off-road bicycles. 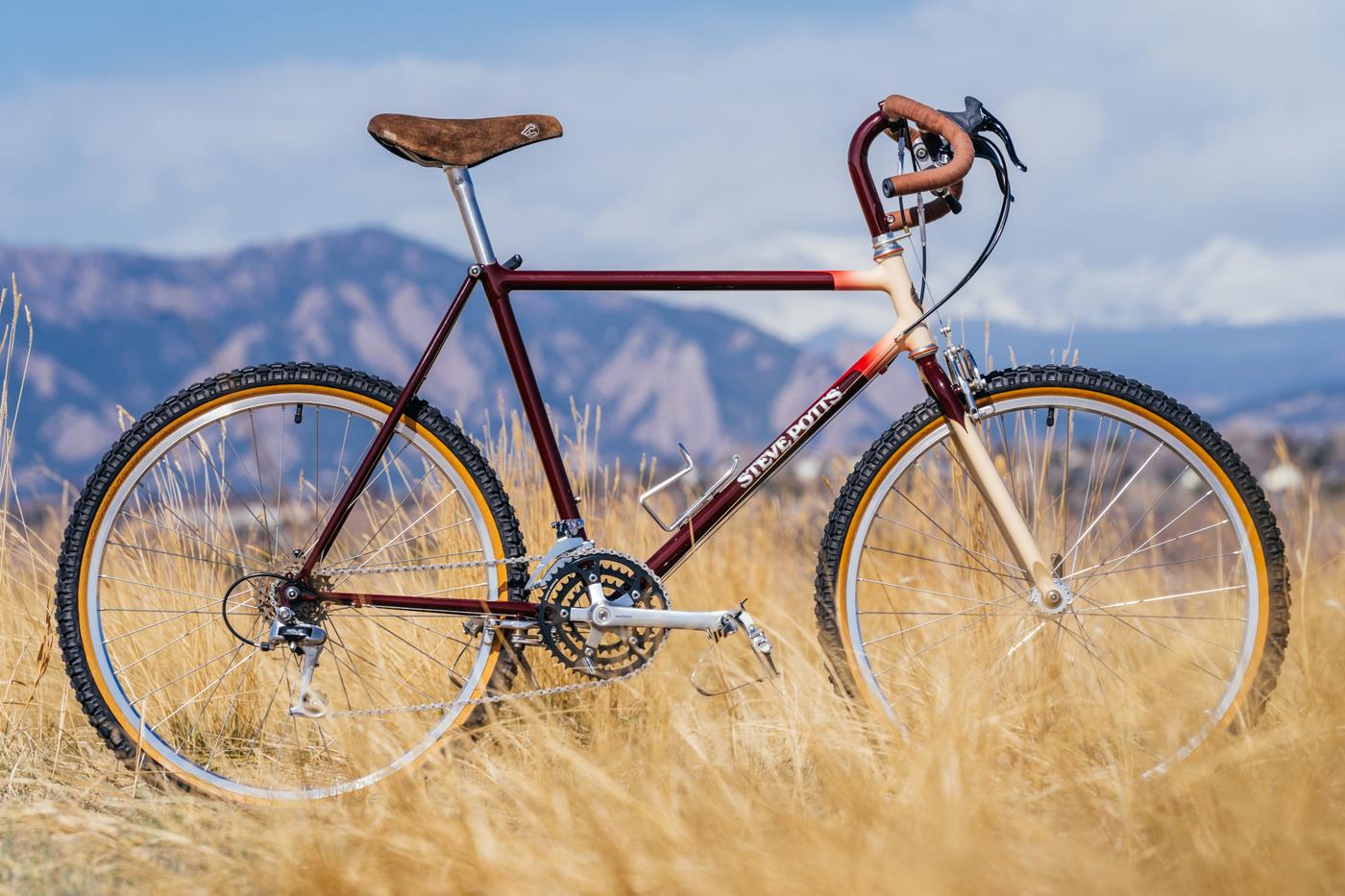 Besides being one of the nicest people you will meet in the bike industry, it should be obvious why Steve Potts is still a highly sought custom frame builder today. Steve primarily builds titanium frames now but still finishes many of them off with a Type II fork at the request of the customer, whether it is for a rigid mountain bike or a gravel bike. In this world of carbon everything, a steel fork still provides a fantastic ride for the most discriminating cyclist. With a fork design that is 40 years old and Steve building for the same amount of time, this is clear proof that people value superb craftsmanship, then and now.