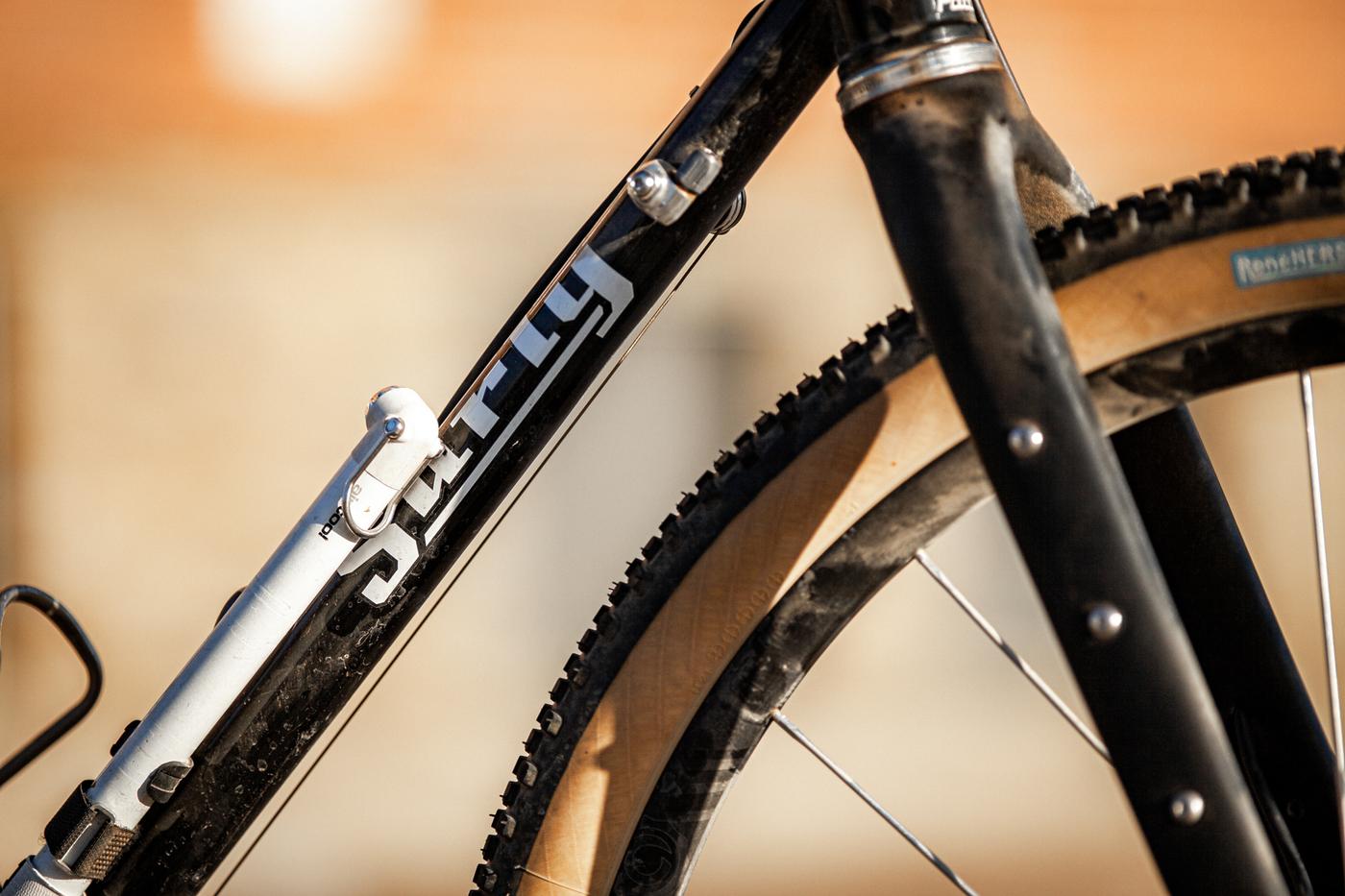 So many beautiful bikes come through during race week. We see everything from simple steel single speeds to custom titanium “gravel-daddy” bikes equipped with the latest wobbly springer forks and carbon handlebars that resemble a bookshelf more than a bicycle part. A couple of my favorites from the weekend were the shop’s mechanics’ bikes.

This fact makes perfect sense if you think about it. Often behind every great build is a great bike mechanic. They are the unsung heroes behind all these drool-worthy bicycles you share in your Instagram stories, pasting a colorful cosmic GIF caption that melts the letters N-E-E-D across your phone’s screen. Naturally, their bikes are just as good. Sometimes they are better, or at the very least, more clever. 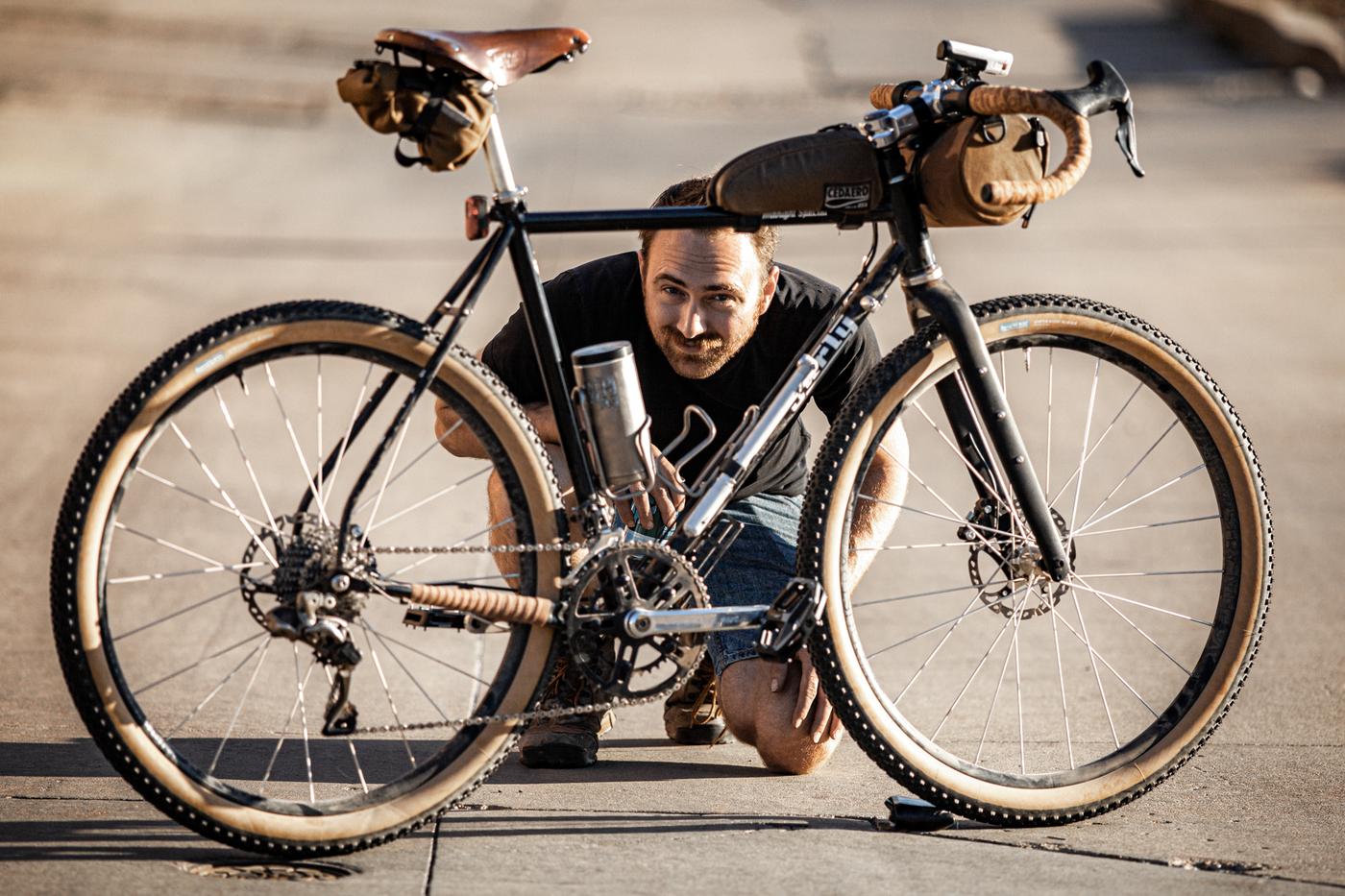 Austin from District’s Midnight Special is precisely that: clever. The build hits you slowly. It makes you take a second, or even a third, glance, causing you to exclaim, “Woah! wait, what?” It inspires me to showcase more bikes owned by those behind the scenes, the mechanics who build your dream bikes and keep you moving. I asked Austin to write a few words about his bike:

“Do you ever have a backlog of bike parts, but no frame interesting enough to give them a home? I do. I guess a lot of bicycle mechanics have this problem. Woe is us! When you, however, set out to use the best components you own for a bike that you can take on some epic journey that only a handful of people have done, that is special. Unfortunately, this is not that type of bike. 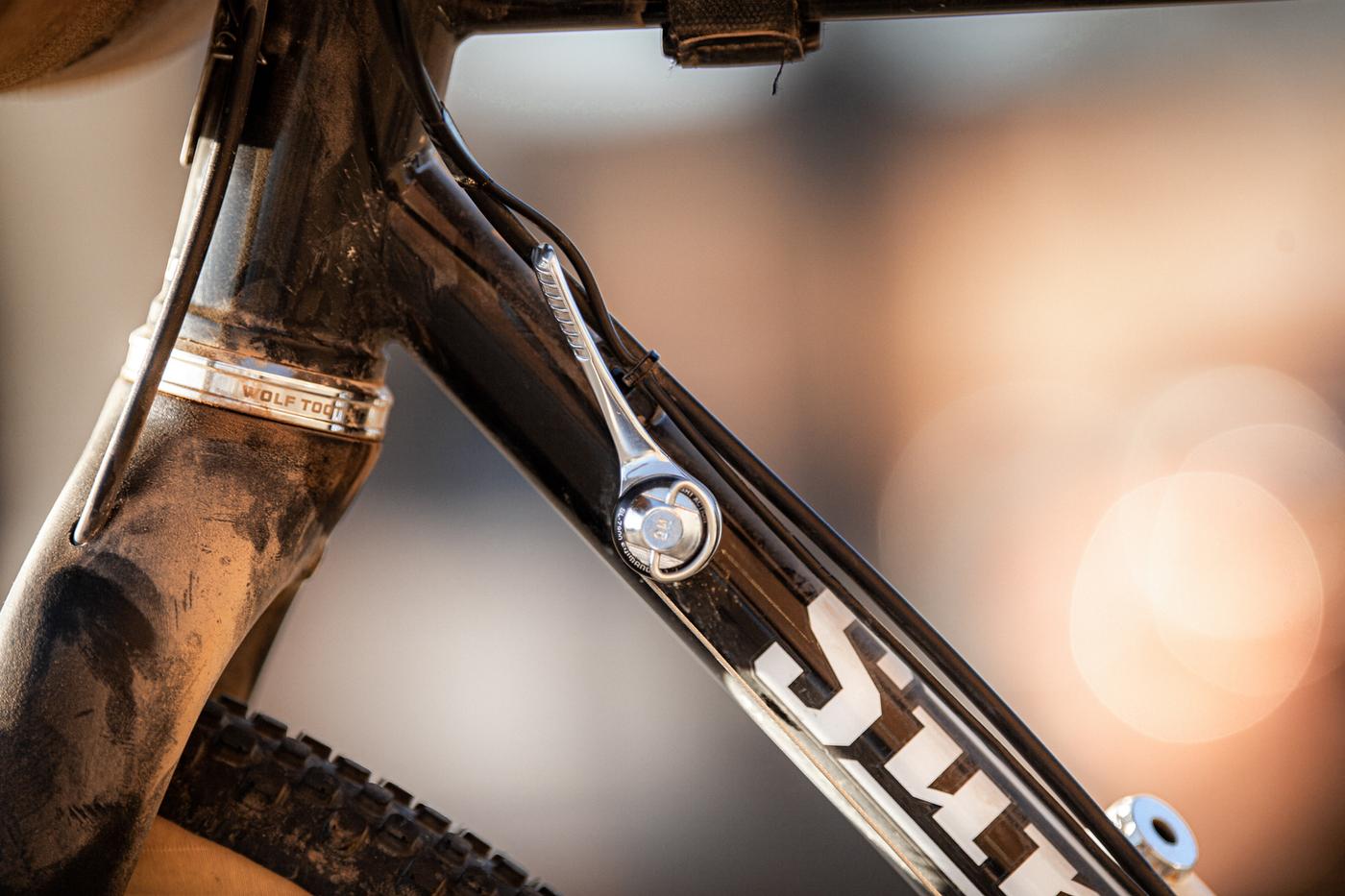 Two years ago, during the thick of the pandemic, I bought an All-City Super Professional and began putting all my favorite stuff on it: Custom bags, MUSA components, Di2 drivetrain, all the best. I even took some sandpaper to the frame and spray painted it as an homage to my first adult alternative transport; a cheap-as-fuck ten-speed road bike called The Hawk. 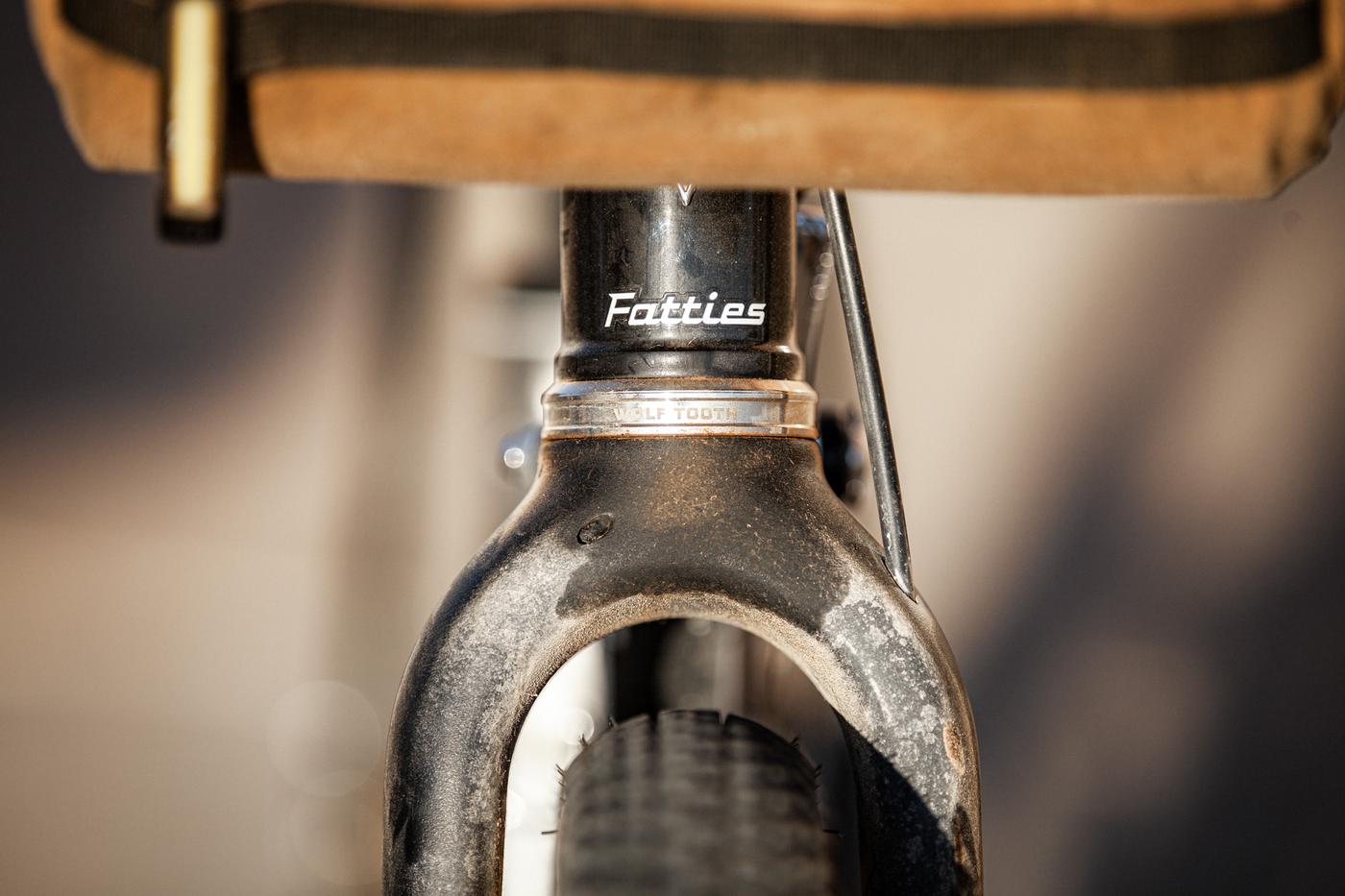 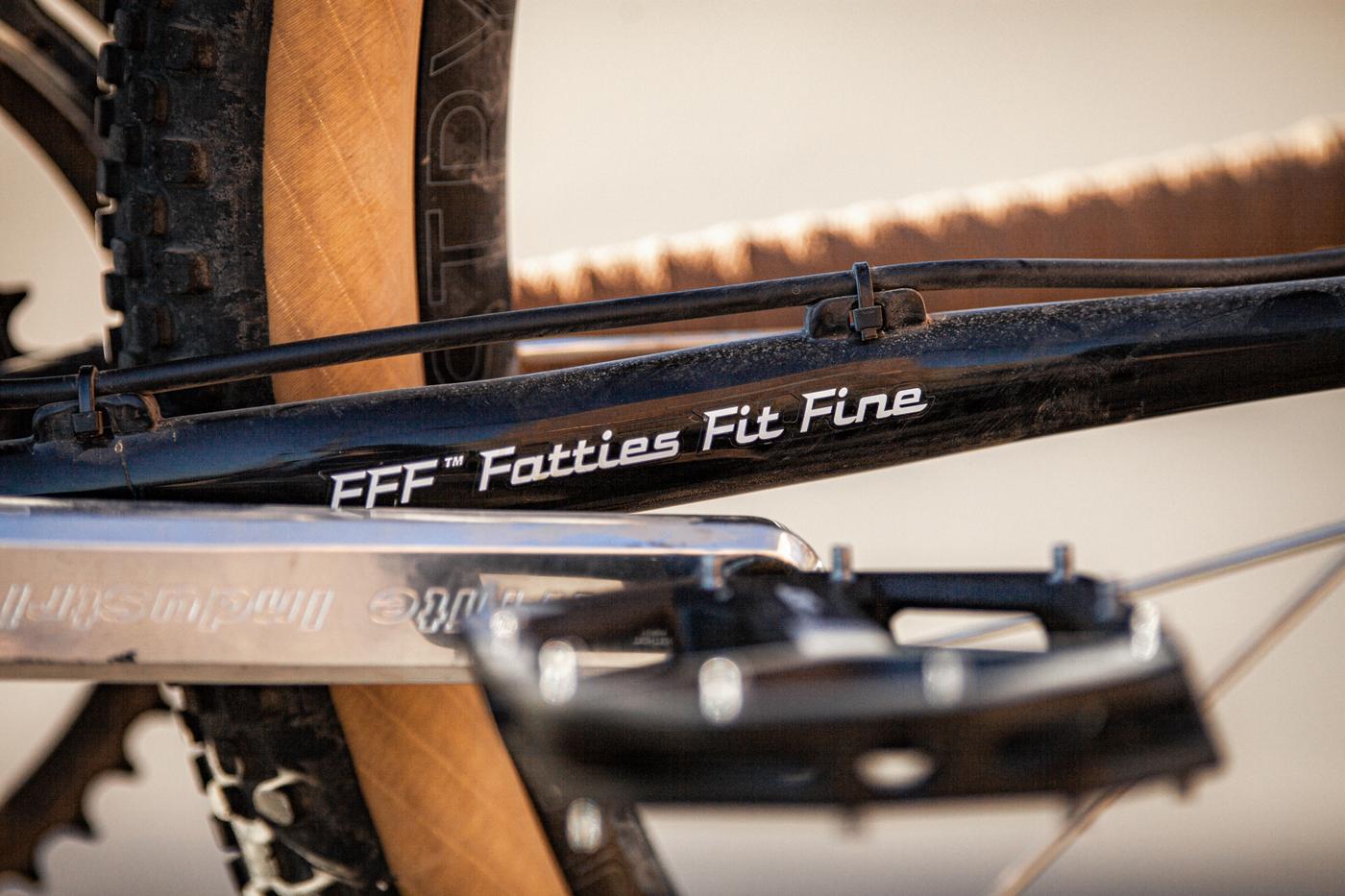 Surprisingly, it came out great. It looked so much like my old ten-speed it was freaky. Like someone who decides a vintage car will make a reliable commuter vehicle, I rode my new Hawk well past its intended use. It rocked. We had many great experiences together. The bike even successfully carried me across the finish line at the Arkansas High Country bike-packing race in 2020. But with a raging pandemic, a contentious presidential election, and a never-ending stream of angry dogs, I rode that bike through the most consistently treacherous landscape I have ever experienced. Sadly, in some twisted irony, the bike is now gone. The downtube crumpled from running into a small boulder-shaped dog that ran out into the road I was on to greet me. So-long Hawk. 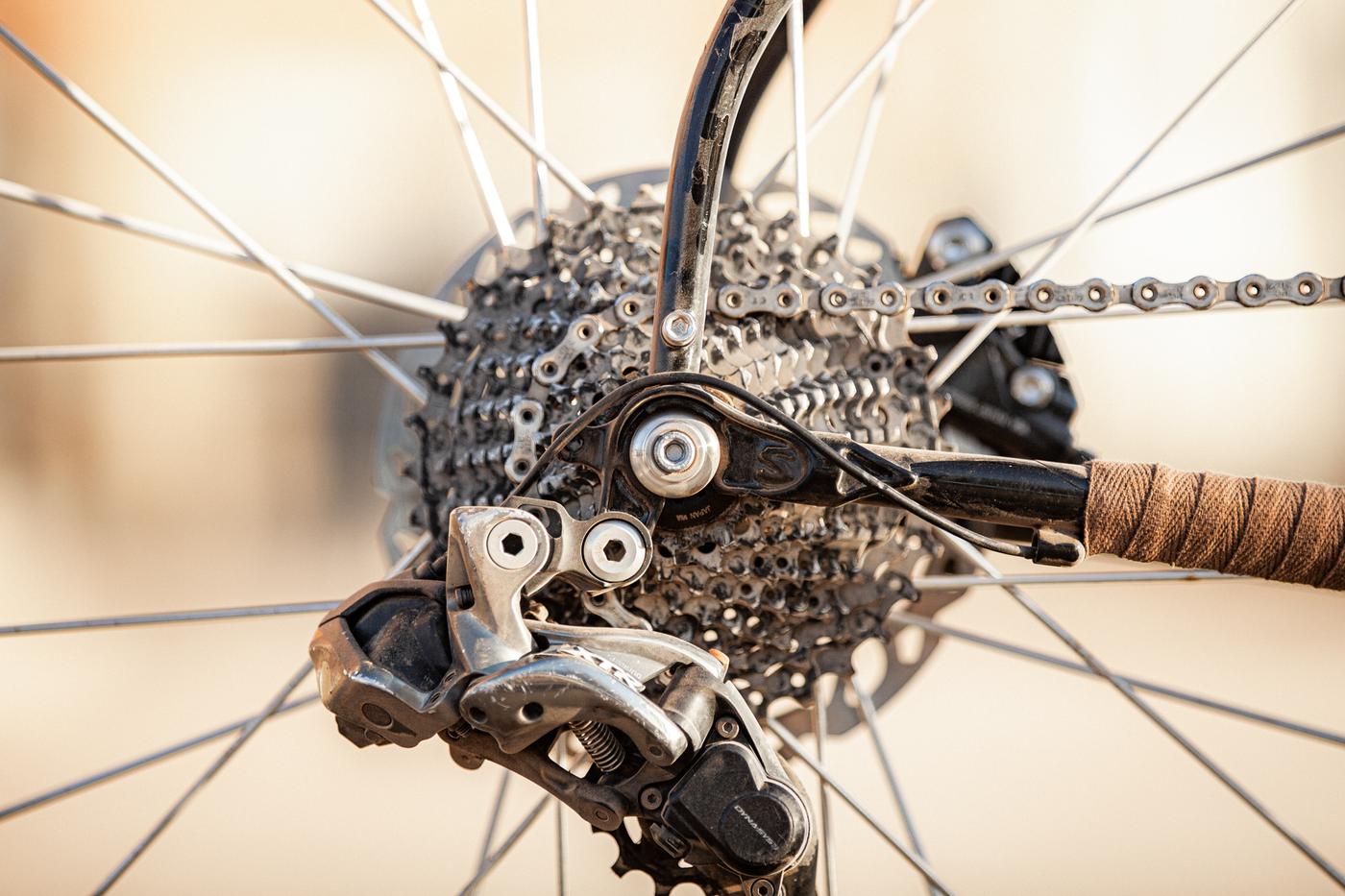 This Midnight Special makes up for that tragic end in an almost serendipitous way. Since bikes were disappearing from bike shop floors faster than they were coming in, this Surly was all that was available at that time. It was not exactly what I wanted, but it suited all my parts, some comically large tires, and it gave me a wonderfully nerdy problem to solve: How to run Di2 on a non Di2 bike.

Problems like these are the quickest ways to satisfy my bike mechanic heart. 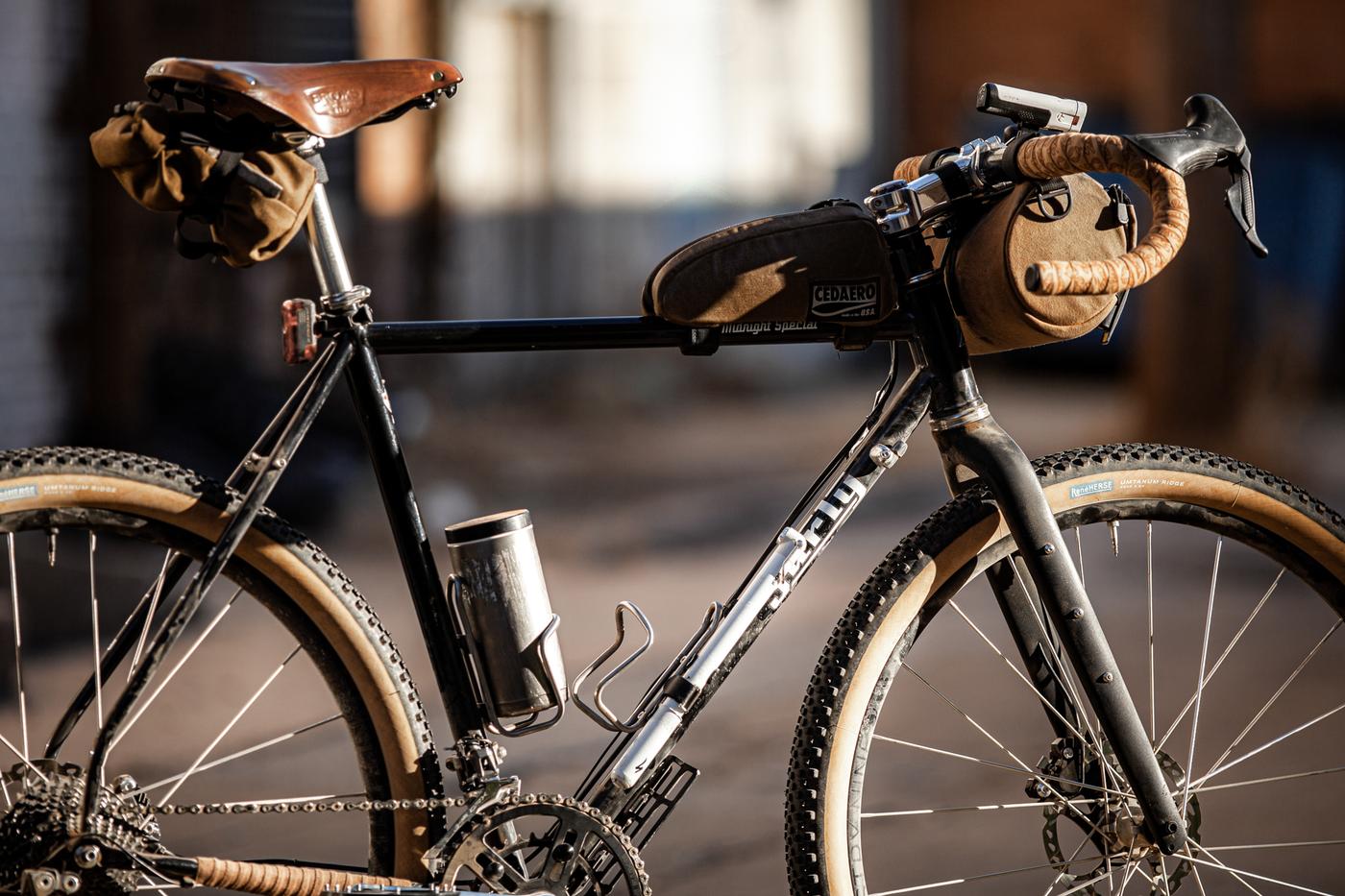 Why Di2? Well, for one, bike-packing hurts. My wrists do not like mechanical brifting over long periods. I used the drain spout and cable guide on the bottom bracket shell to squeeze a single Di2 wire through it and still had a portion of the cable guide, allowing a Di2 1X drivetrain. I paired this with a mechanically actuated double via a downtube shifter. In my opinion, this is the best of both worlds. It is aesthetically diverse, ergonomically ideal, and dependable as hell. The bike is perfect despite my initial hesitation. Surly provided the most optimal blank canvas to paint all the colors of my dashed dreams and minor bodily trauma.

So if you have all the best parts, and are waiting for THAT ONE bike to come along, maybe don’t? I suggest you build something (anything), ride it, break it, build it again, and repeat.”