Cruiser, Klunker, ATB.  These terms get thrown around a lot and yet they represent pretty much the same thing: a rigid mountain bike. For me, the granularity of these denotations is intriguing. In modern times, these words have people debating about the proper nomenclature for each of these bikes, and there are opinions on every side of this argument. For those curious, I understand that a Cruiser is a coaster-brake bike with no gears and no hand brakes. A Klunker is a rigid mountain bike with gears and hand brakes. An ATB is simply an “all-terrain-bicycle” and was historically used to refer to a mountain bike with flat bars. “ATB” was used to denote a new, increasingly popular form of cycling at the time: “off-road” riding. AKA, riding on dirt, not pavement. Since the genesis of the term “ATB”, it has been co-opted to mean drop bar bikes as well. Being the trend-setter he is, once Ultraromance dubbed these bikes “ATB,” everyone jumped on board.

Time is a flat circle, like a wheel, so what was once a pariah in the cycling industry is bound to become the savior at one point. That’s kind of how mountain biking started, right? A bunch of misfits took the hills of Marin and the mountains of Colorado and began riding inappropriate bikes inappropriately.

Then, thirty-odd years later, Grant Petersen of Bridgestone and Rivendell fame designed the Hunqapillar, a true-to-form Klunker. I first rode one back in 2014 and immediately was drawn to the bike’s capabilities and unique ride quality. Yet, for some dumb reason, I didn’t buy one and missed out on every opportunity to own a size 62cm until recently. So why did the guy with too many bikes buy a Hunq? Well, read on below to find out. You gotta hand it to Rivendell. Grant has done an amazing job with the Riv catalog over the years. The bikes have a similar aesthetic, with intricate head badges, beautifully paneled paint jobs, wonderful lugs, and rim brakes only! To the average person, the Atlantis and the Hunq might look like the same bikes, but as cycling geeks, we know they are two very different models.

“It’s a stout touring-trail bike with elements of both the Atlantis, our standard touring bike and the Bombadil, our stout-as-all-get-out touring & mountain bike… Back to Bombadil-like, the Hunqapillar has an expanded frame, meaning the listed size is the length of the seat tube; and from that point the top tube slopes up six degrees to its junction with the head tube. This increases the standover height, and so you ride about 3 to 6cm smaller than you’d ride if the bike had a level, or way less sloping top tube. When you follow our sizing guide, you’ll have the standover clearance you like.”

So, in essence, the Hunq is a mountain touring bike. A bit stouter than the Atlantis but with touring accouterment for the long haul. If anyone has a 62cm Bombadil, please let me know as that’s the other Riv I’d love to have in my quiver! 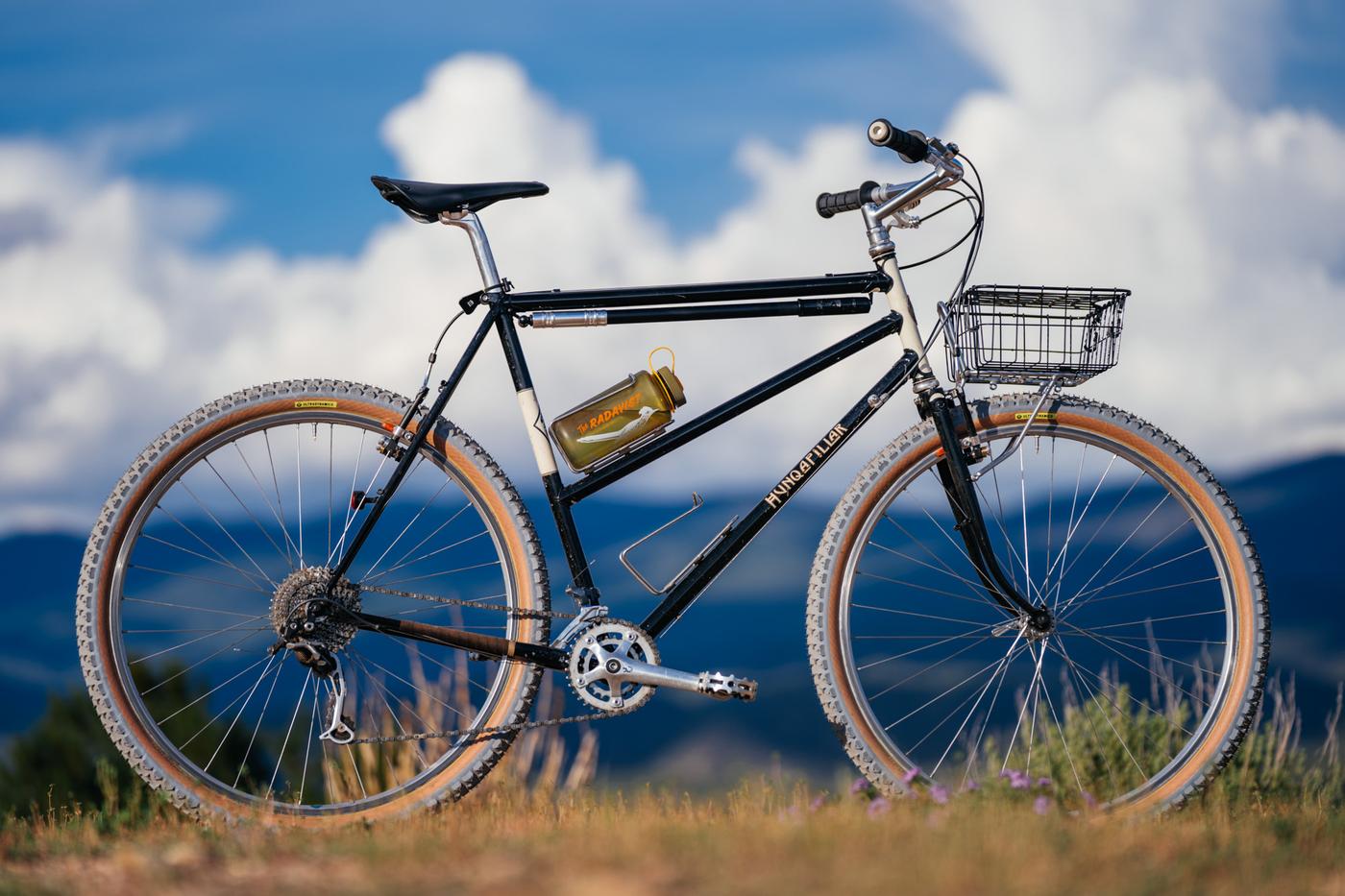 But what is the Hunqapillar to me? Well, it’s a bit of an all-rounder. I hope to do some rack-n-pannier dirt tours on it with some Nitto and Tubus racks, but now I use it as a basket bike and my casual trail bike. I’ll rip around the urban singletrack on it and have taken it on my favorite gravel loop in town, which includes singletrack and a long ascent into the alpine.

I like to ride the Hunq how I imagine Joe Breeze, Tom Ritchey, and the “founders” of mountain biking rode their first bikes: flat out, cooked corners, spitting up gravel on fire road descents, and pedaled without intention, without a care in the world. 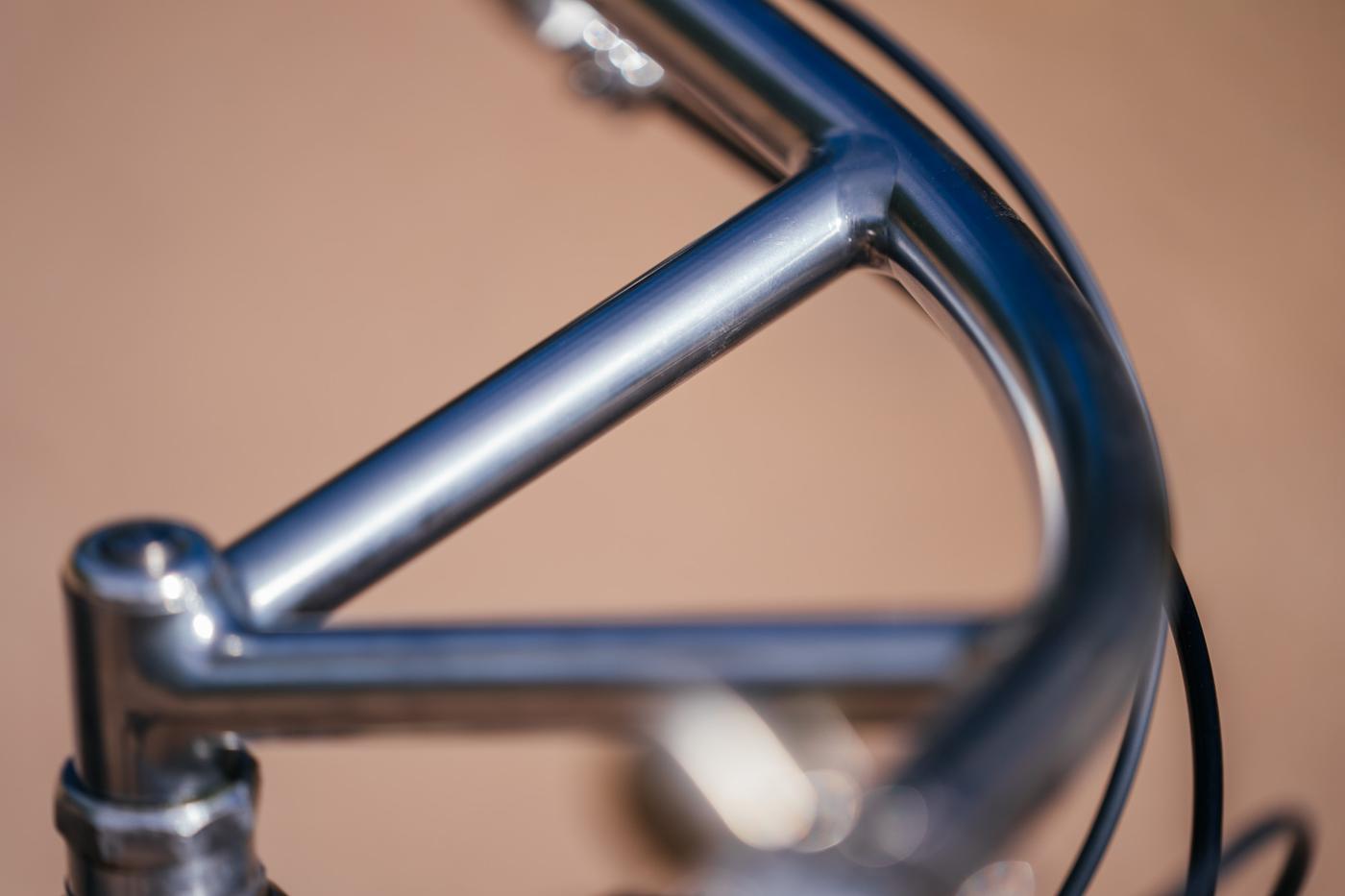 When I bought the Hunq from a friend in Santa Fe, I didn’t change much about the bike. The previous owner, Aron Dubois, a friend of mine, did an exceptional job with the build, centered around a Rivendell fillet-brazed Bullmoose bar. These bars were made with the blessing of Tom Ritchey by Nitto for Rivendell using a modified sweep, rise, and width, differentiating them from Tom’s original design just enough to call it their own.

At the time I bought the Hunq from Aron, I was refurbing my Ritchey Tam, with some Tom Ritchey-made steel fillet Bullmoose bars. Back then, Tom made each of those bars by hand, and I was enamored with the set I had scored for the Tam. So when the Hunq rolled into my stable, I felt like it had found a kindred spirit with the Tam. Yet, the Hunq is arguably more modern. 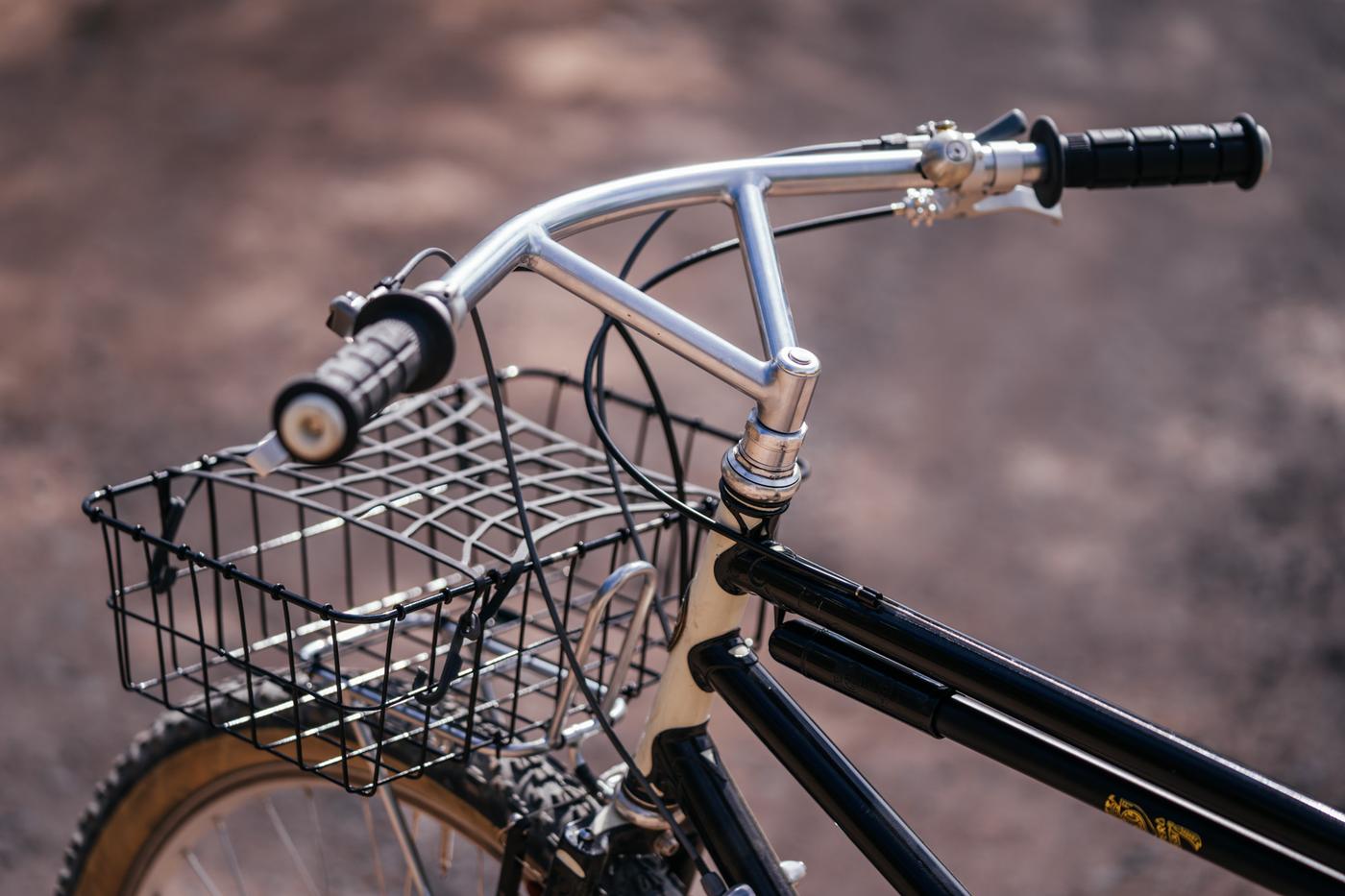 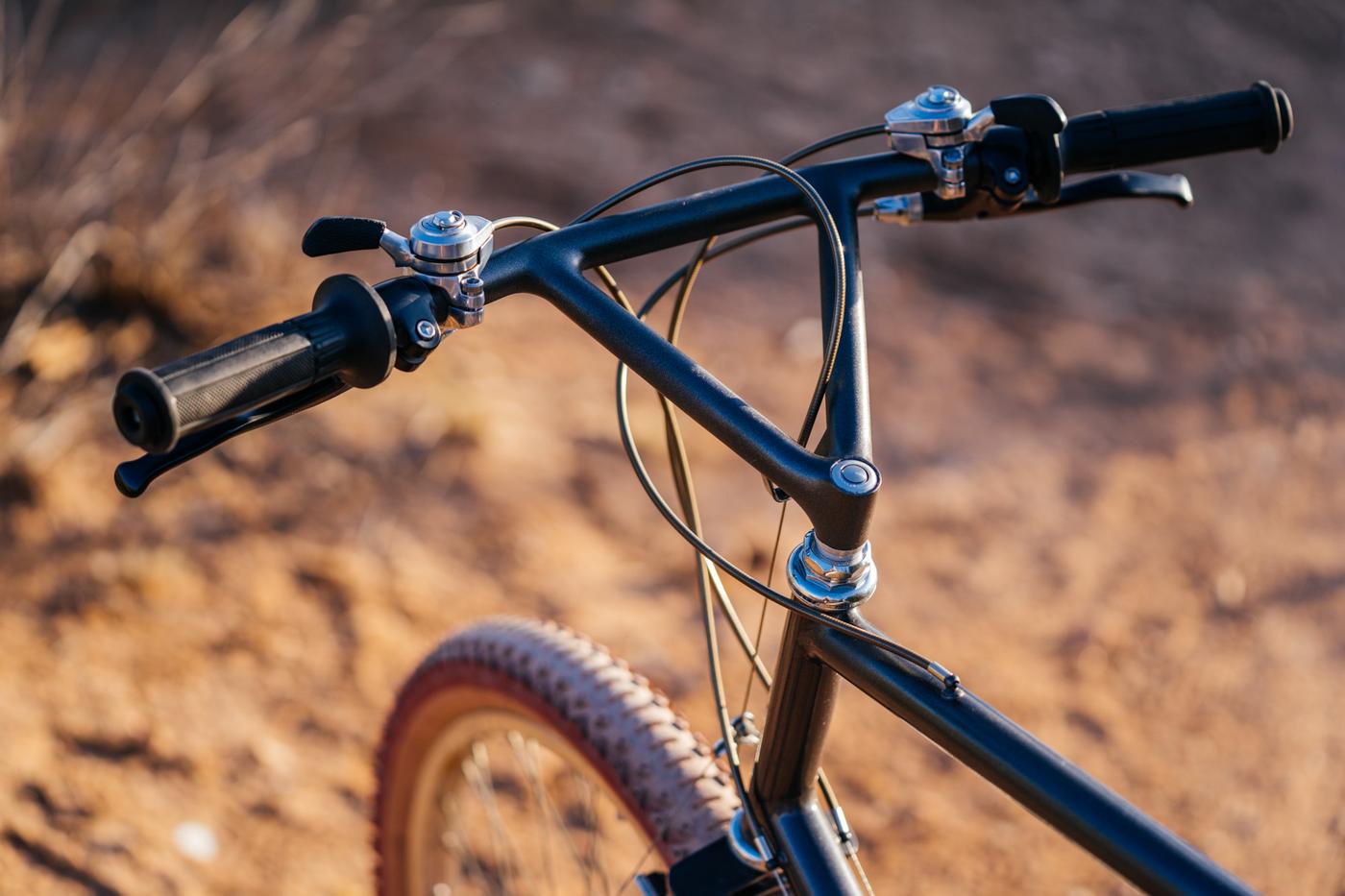 As you can see, the bars are very different while looking strikingly similar. The OG Bullmoose has considerably less sweep, longer extension, and less rise. Both are stiff and add a wonderful bit of flair to these noble steeds. While these two bikes might look completely different, there are some similarities. They’re both friction-shifting, rim brake actuated, and were designed to take on fire roads and singletrack alike. 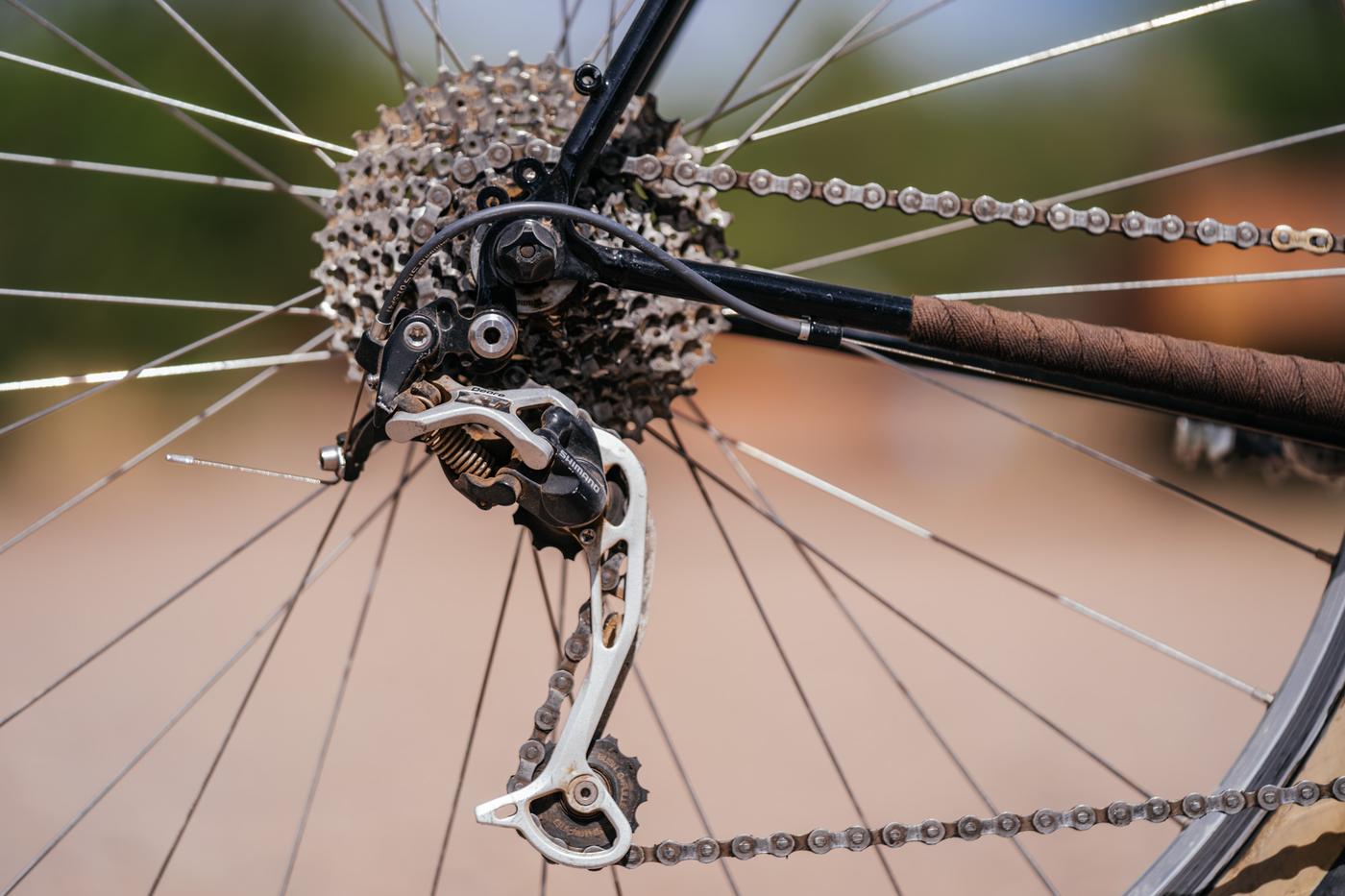 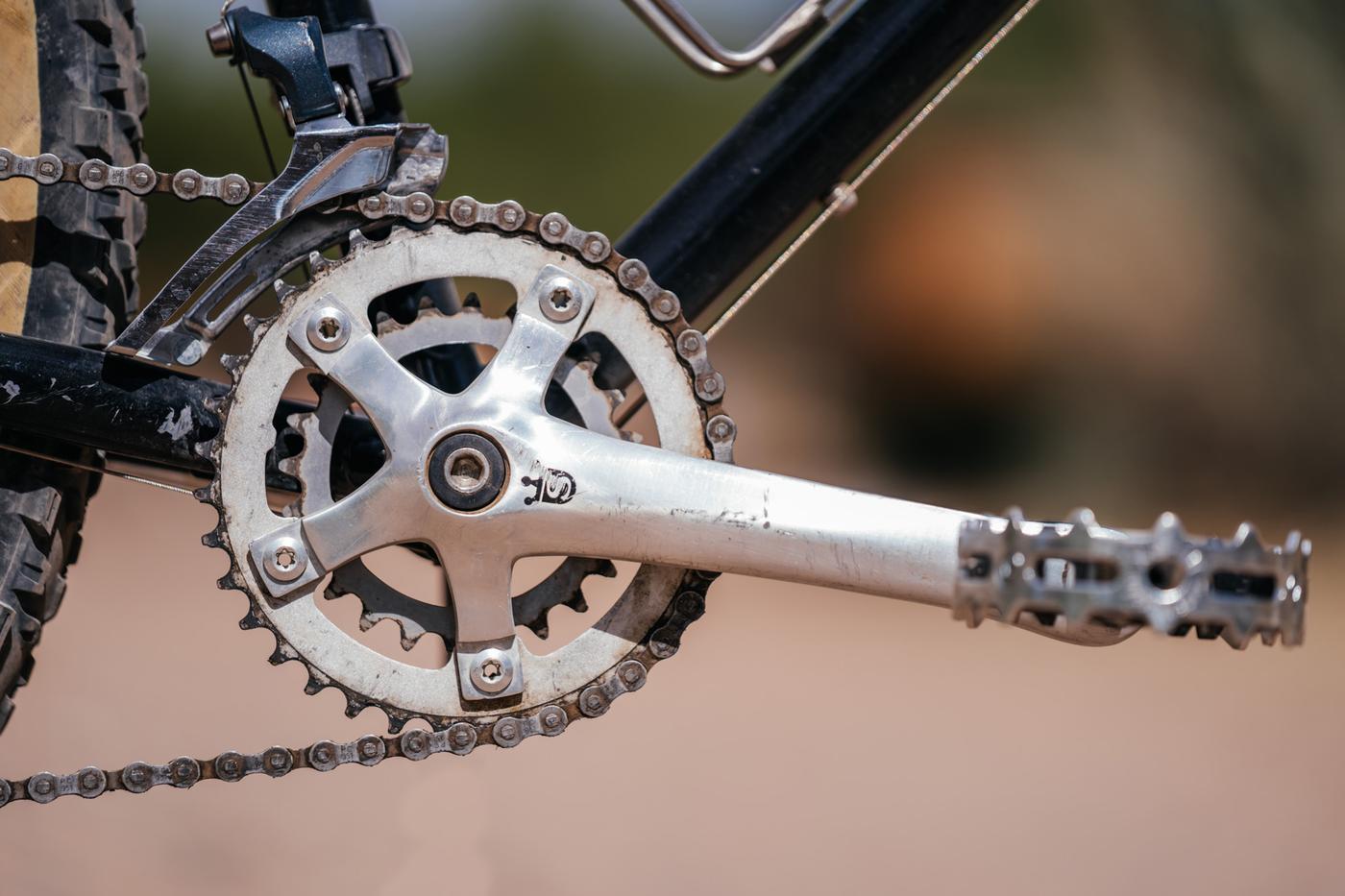 I’m sure many of you agree, but 8-speed bikes with friction shifting are addictively smooth. With Paul thumbies, Shimano shifters, XT rear mech, a Sugino crank, and a XT front derailleur, it’s about as good as it gets. Remember, I ain’t racing this bike. It’s all about smooth spinnin’, alpine climbing, and bombing through juniper and piñon forests, all en route for a tasty cold brew coffee. 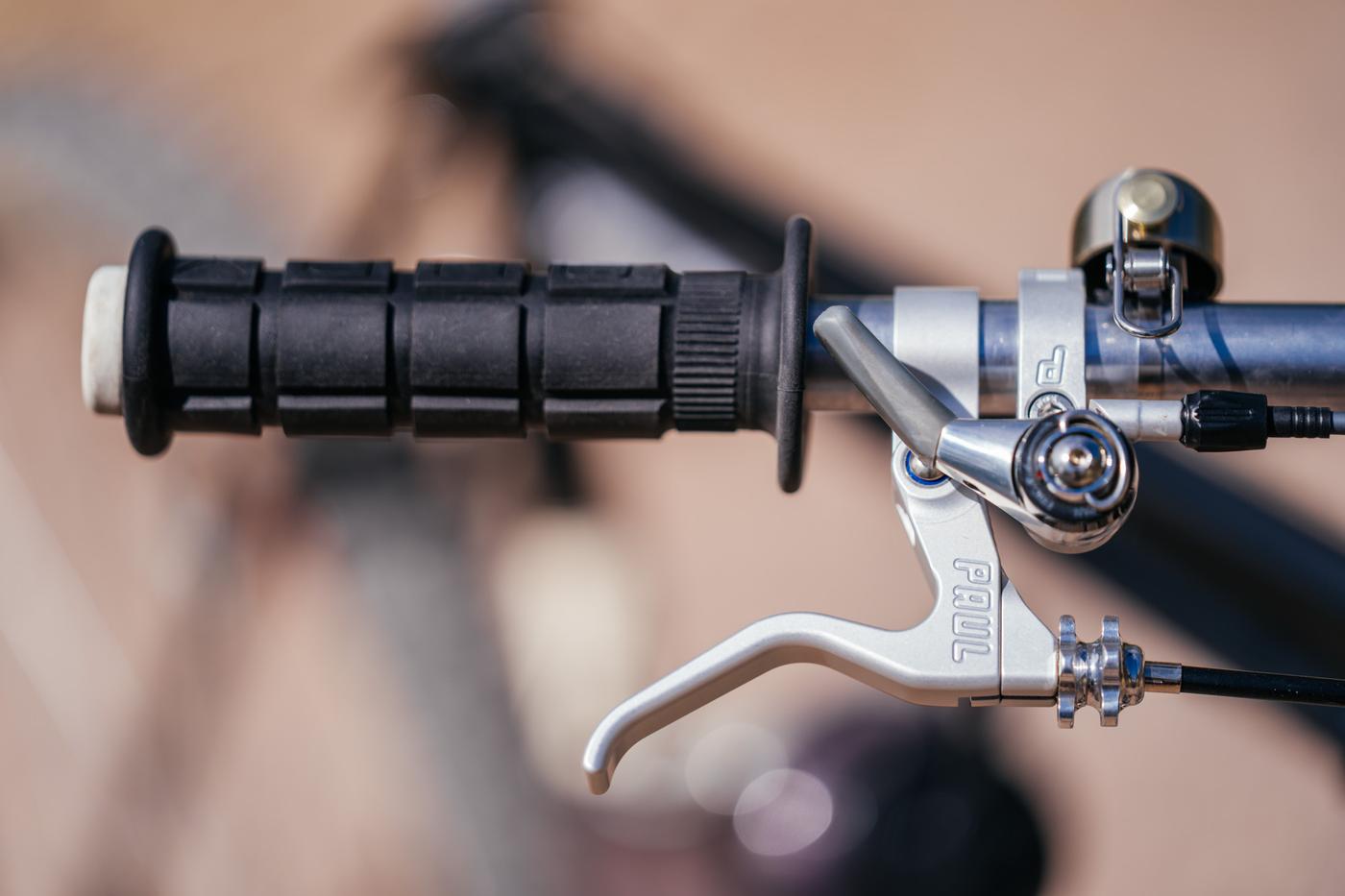 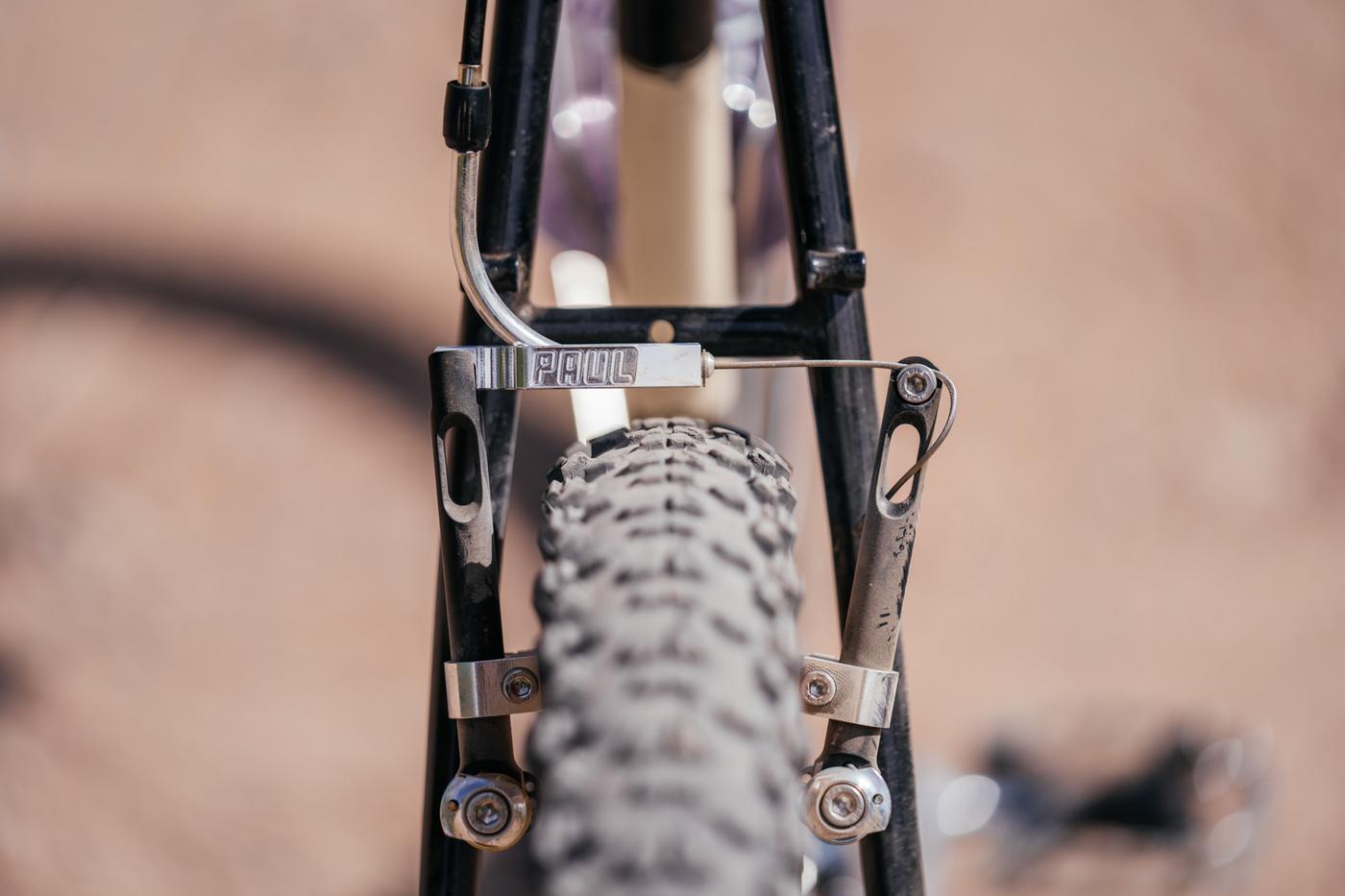 One of the details I love about Aron’s initial build that I kept were the black Oury grips with white bar end plugs. There’s something about Oury grips on a klunker that just feels right. Like pineapple and pizza! I added the Paul Moto Lite brakes, Love levers, frame pump, Brooks Cambium, and just installed some fancy new tires. 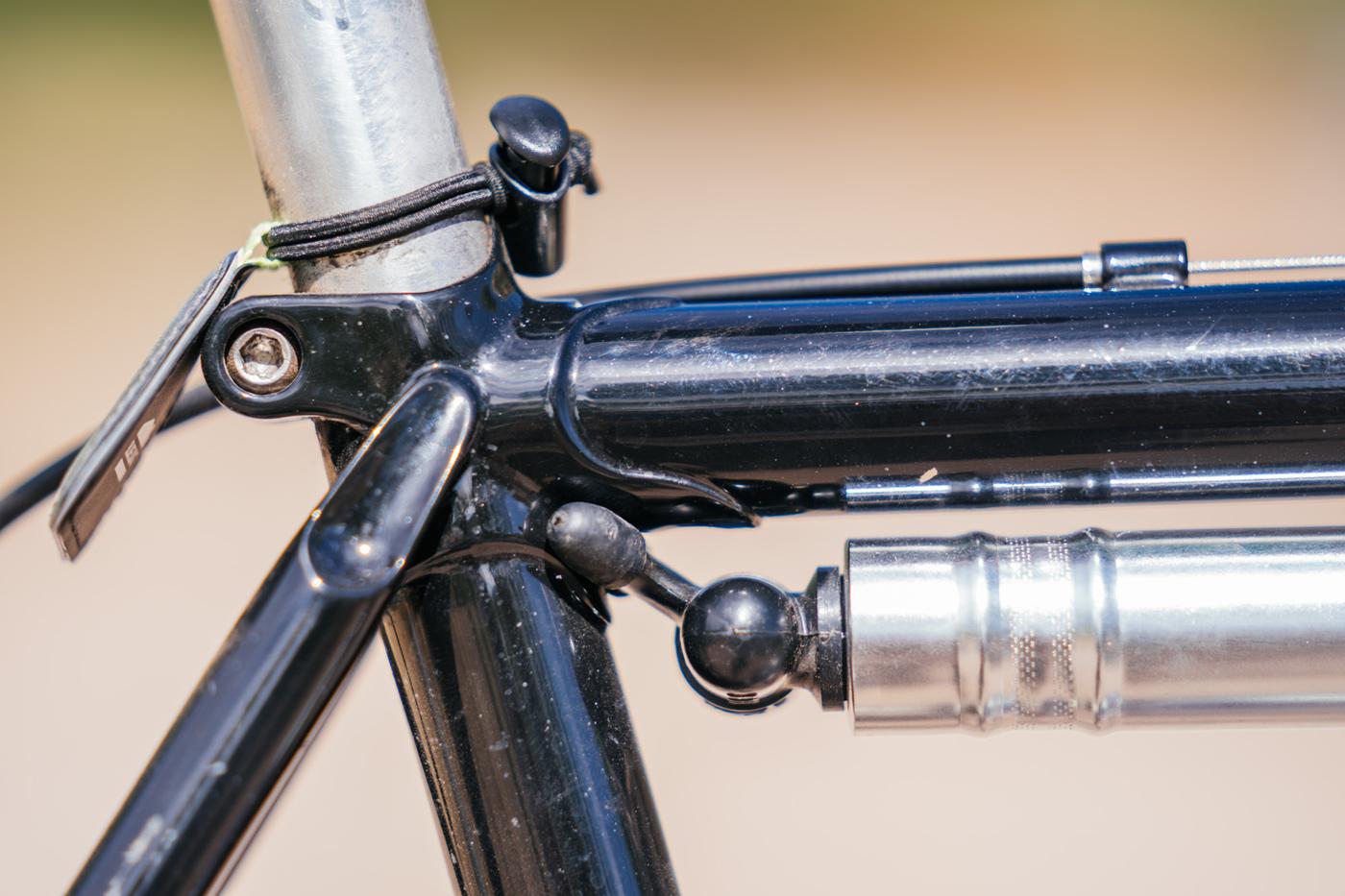 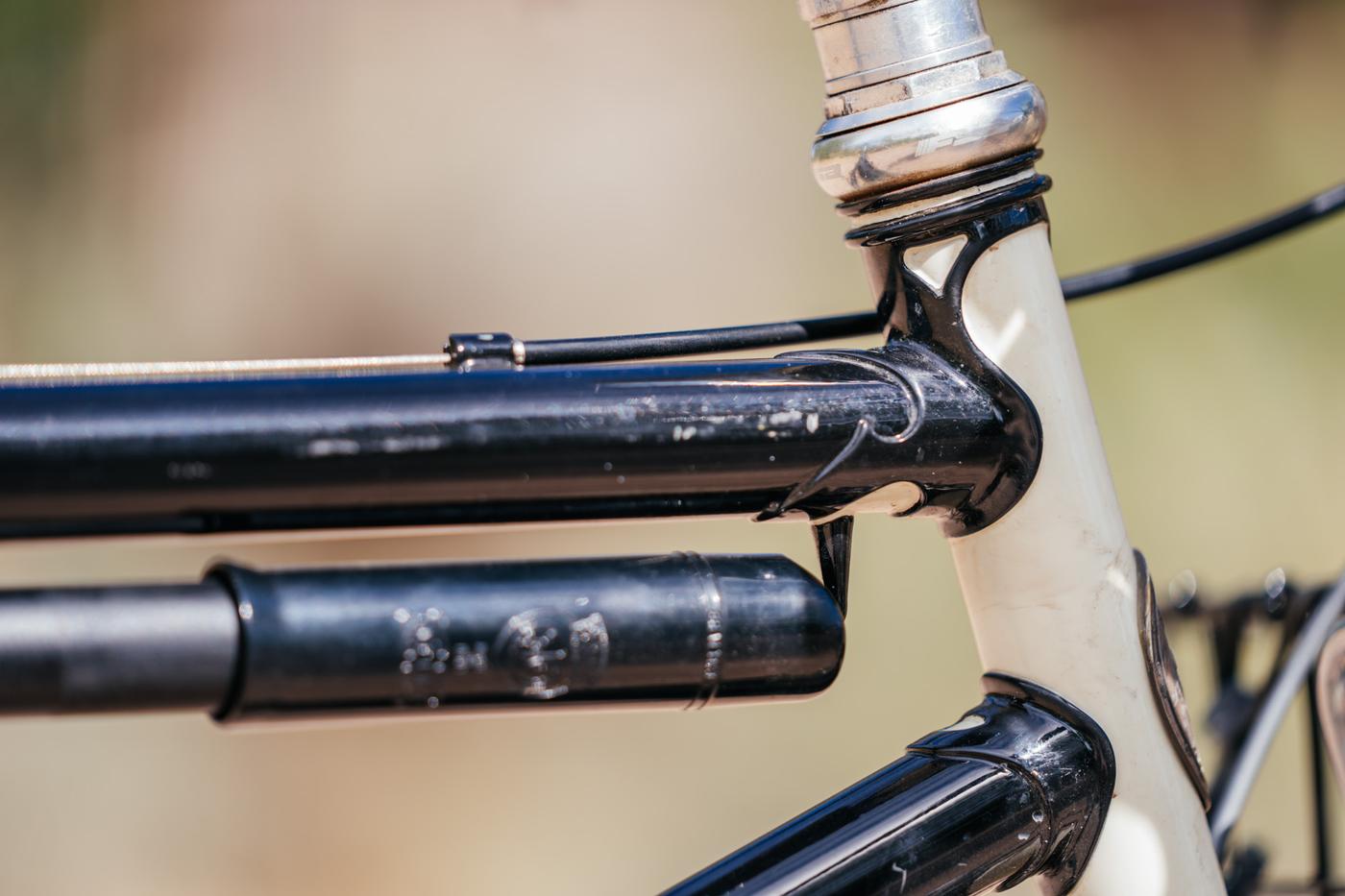 I mean, if your bike has a pump peg, why not add a pump to it? I rebuilt this old 1970s Silca frame pump with a new bushing and spring, and it operates as new now. Pumping up a 29er tire takes a bit of time, but again… we’re not in a hurry on this bike! 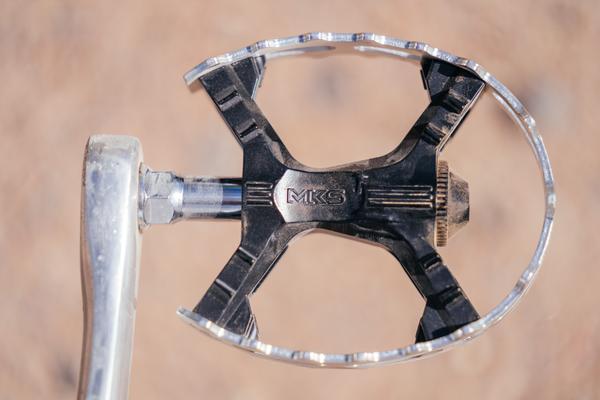 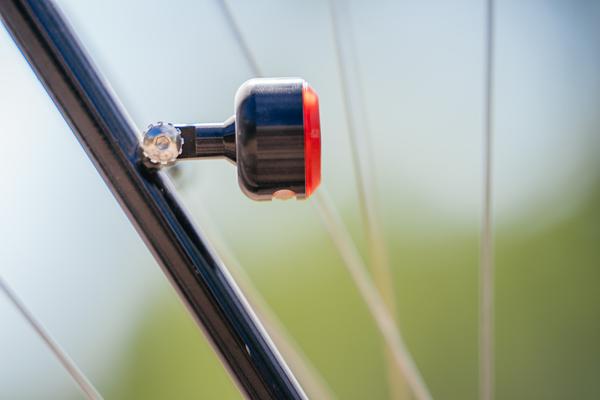 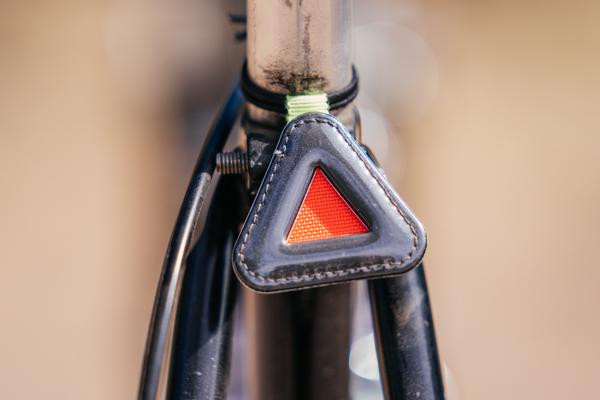 From my friends at Hope Cyclery, I bought those nifty MKS XCiii pedals, a mini reflector triangle, and a Blue Lug Komo light. 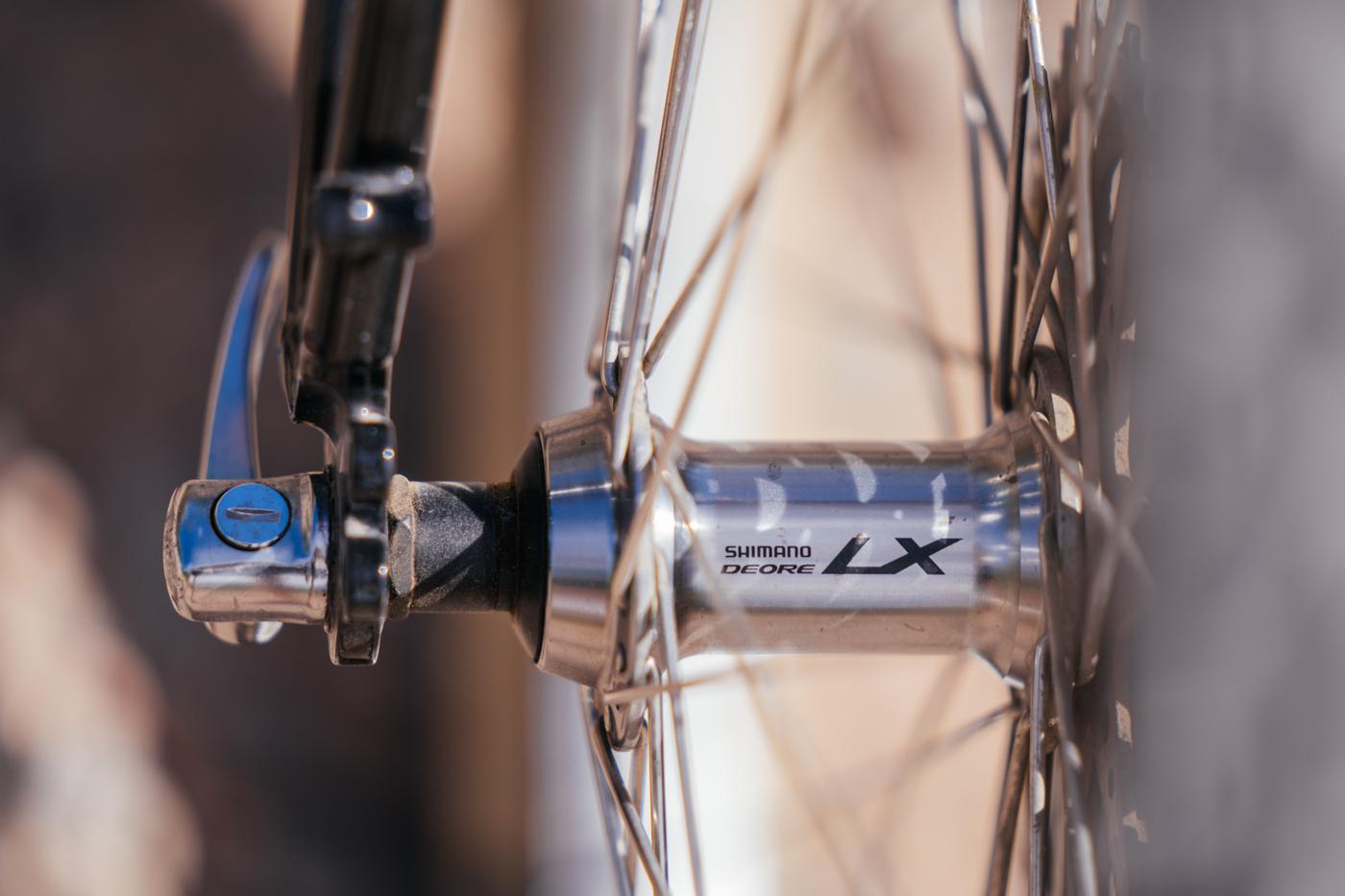 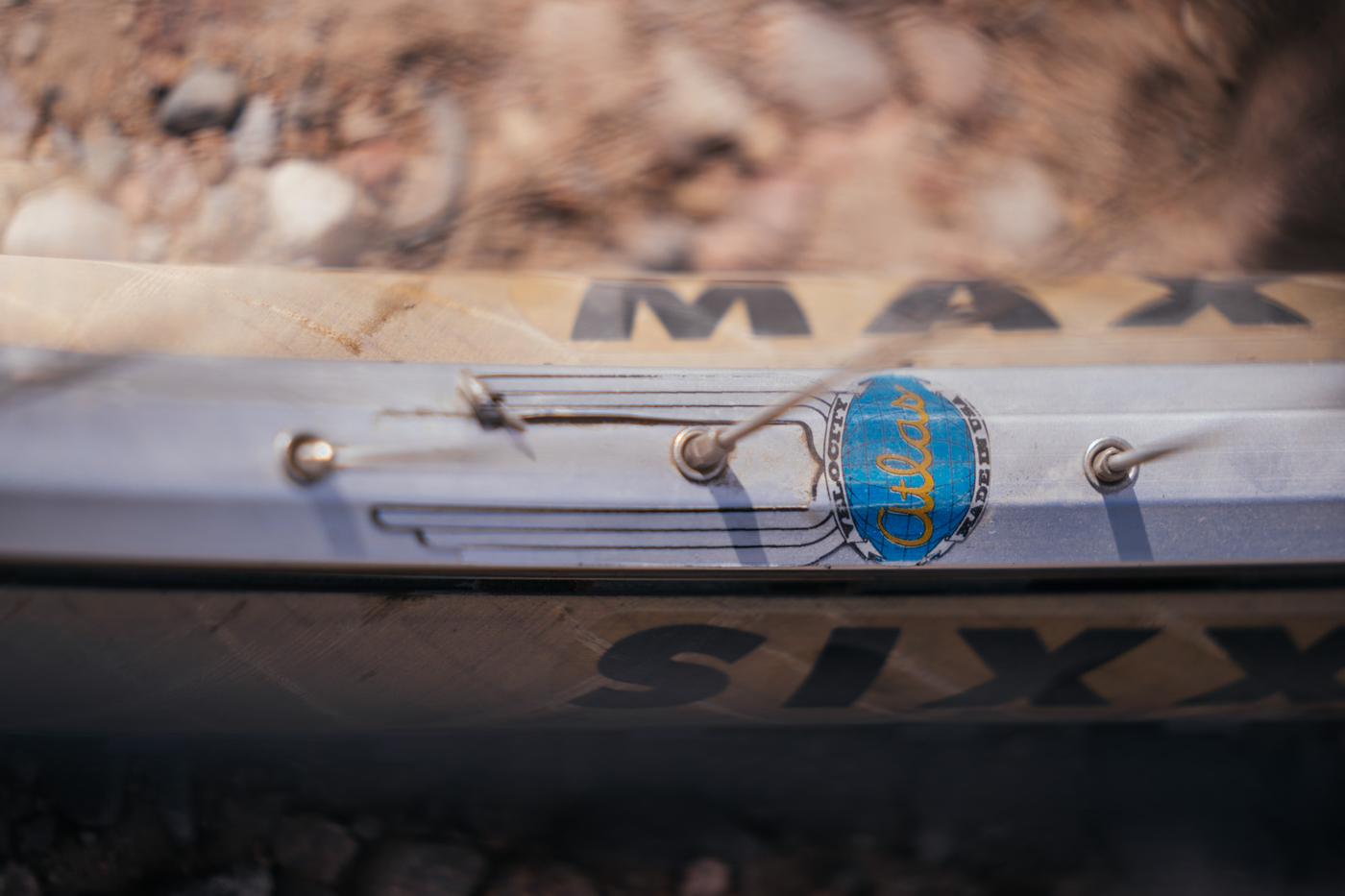 While I love the Deore LX hubs and Velocity Atlas hoops, I’d love to lace up a generator front wheel and a rear hub with more engagement. With friction shifting, it gets hard to “feel” which gear you’re in, and on a few occasions, I’ve gotten chain suck as the chain kicks off the front rings from being in-between rear cogs. Let me know if anyone has an 8-speed 32h, rim brake, King hub! 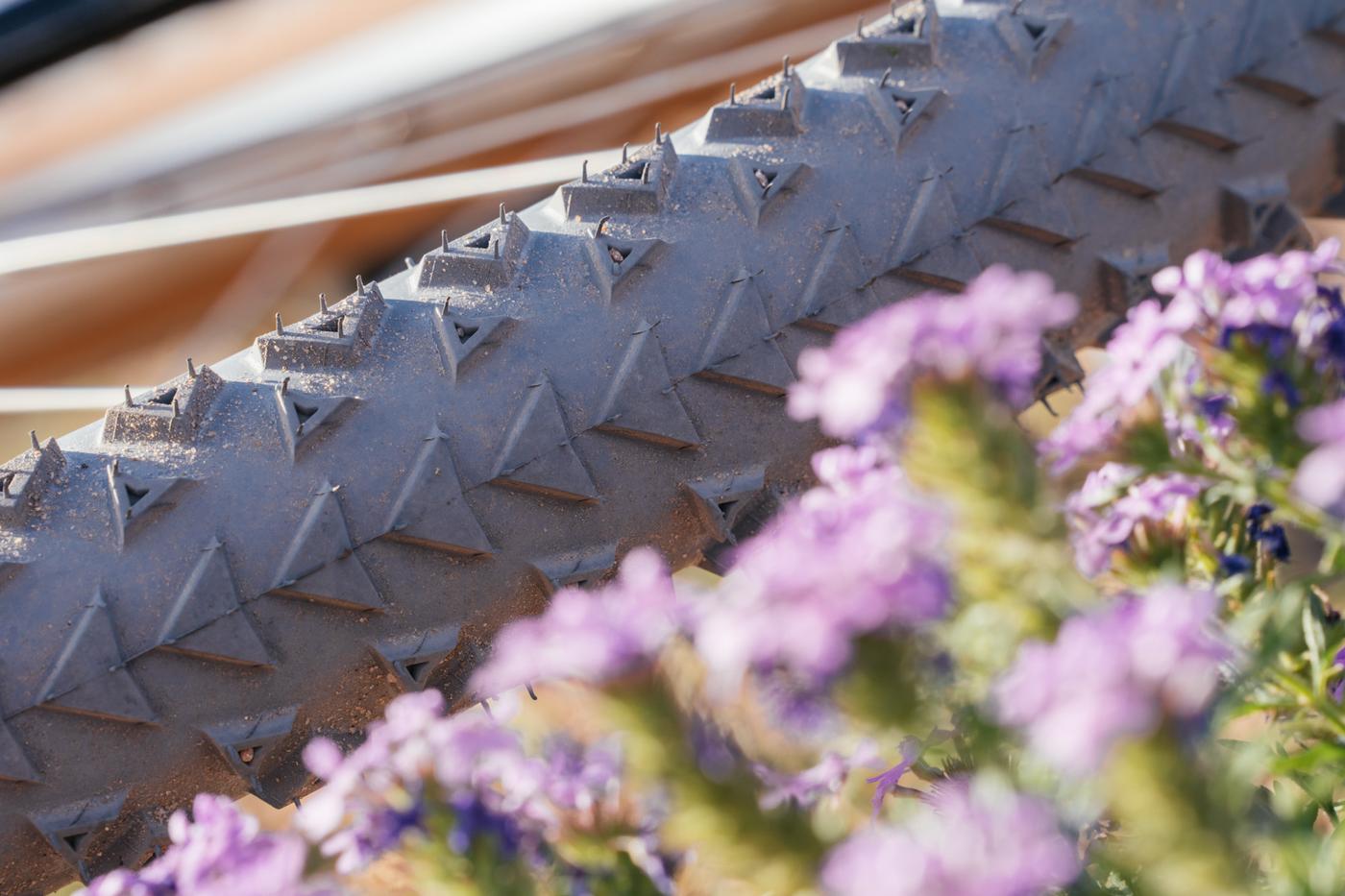 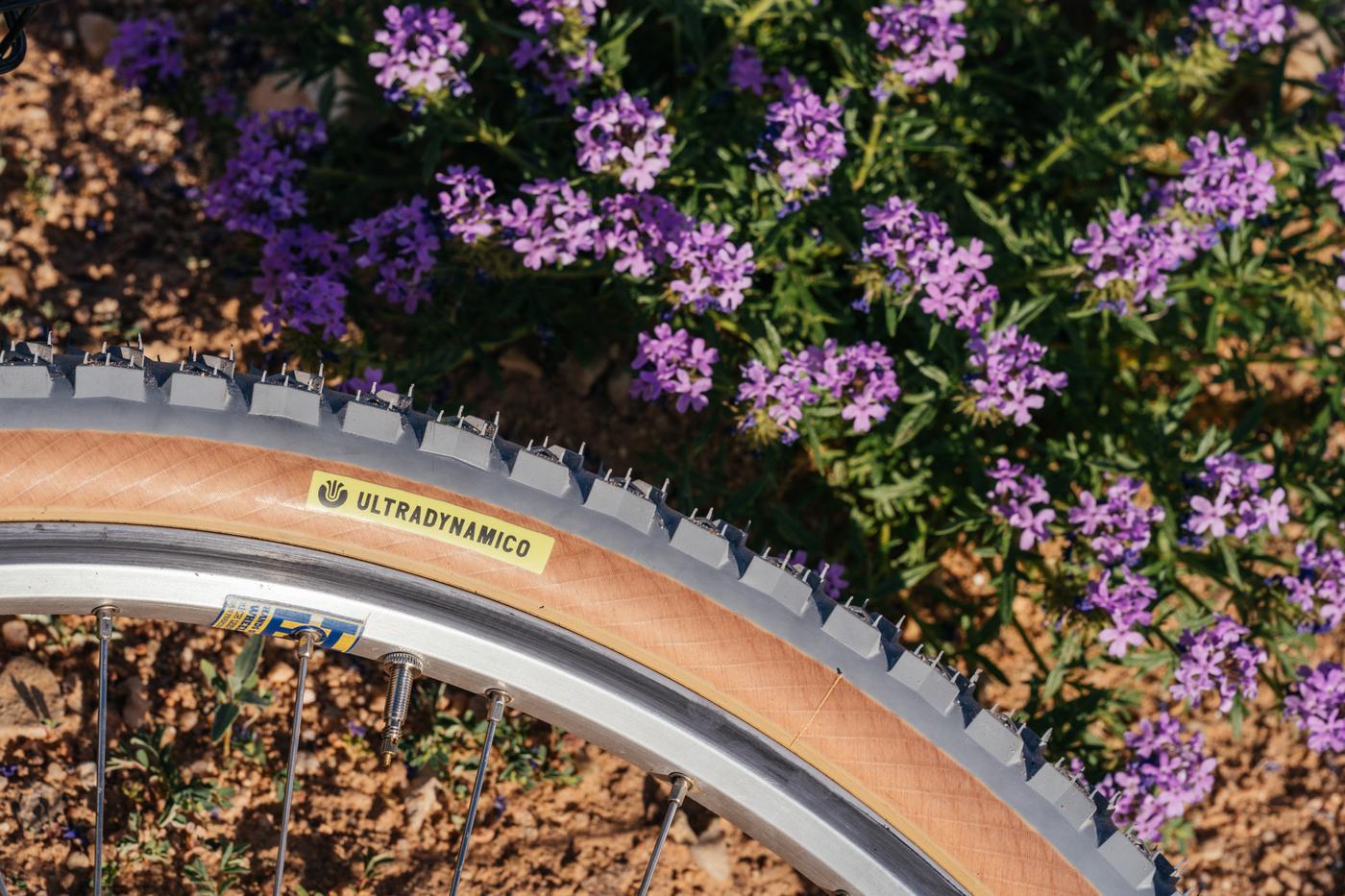 I’m elated that Ultradynamico finally produced its Mars tire in a 29er. These are 2.22″ inches; having just mounted them, they’ve yet to blossom into their full, plump ‘n’ supple selves. Will they stand up to Rocky Mountain rides, sharp basalt, and quartz chunder? Time will tell, although they’ve been a blast on my Ritchey Tam, and Cari has yet to kill hers, so we’ll see! Do they look good? You bet your tanned ass they do! They pedal nicely on mixed terrain, too. After setting them up, I had to shoot a few more photos. Is the Hunq perfect yet? 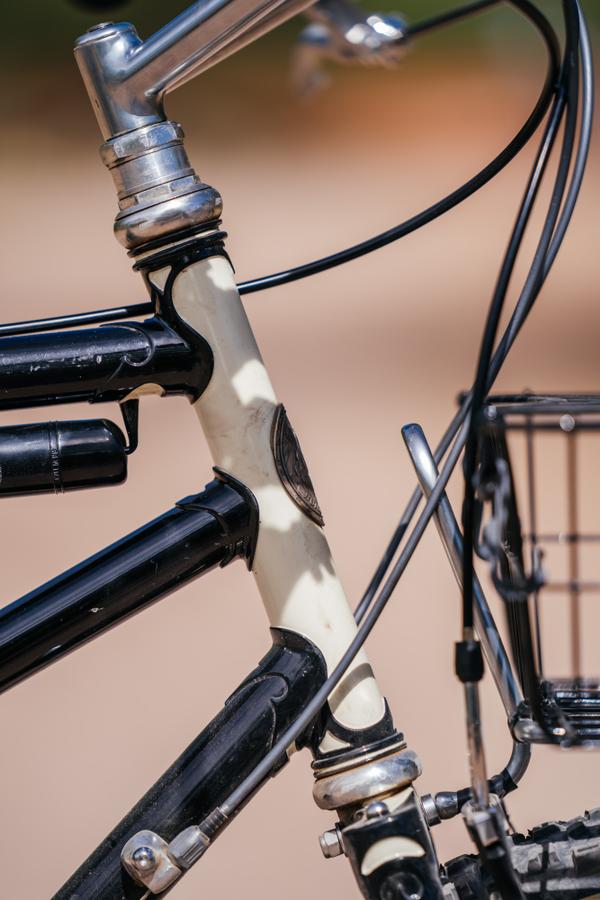 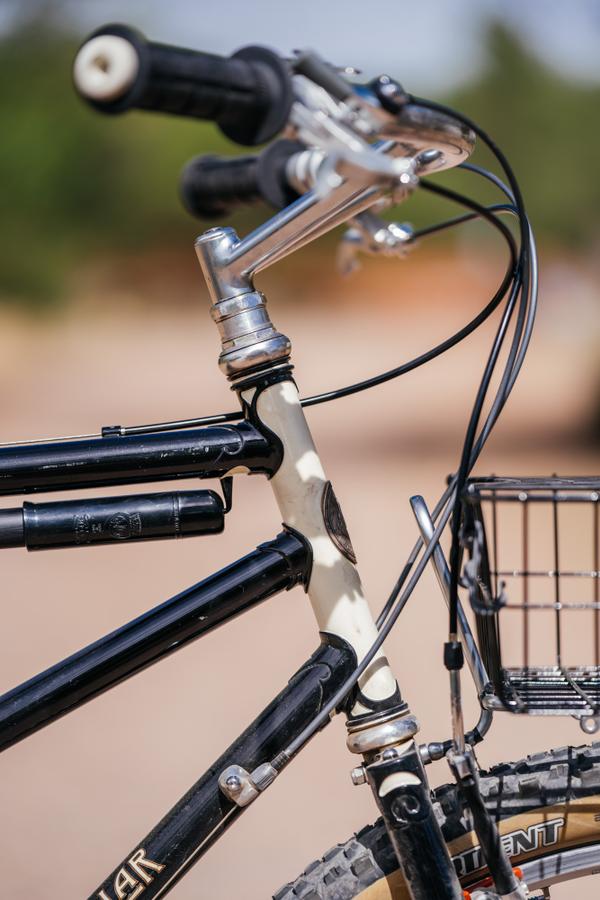 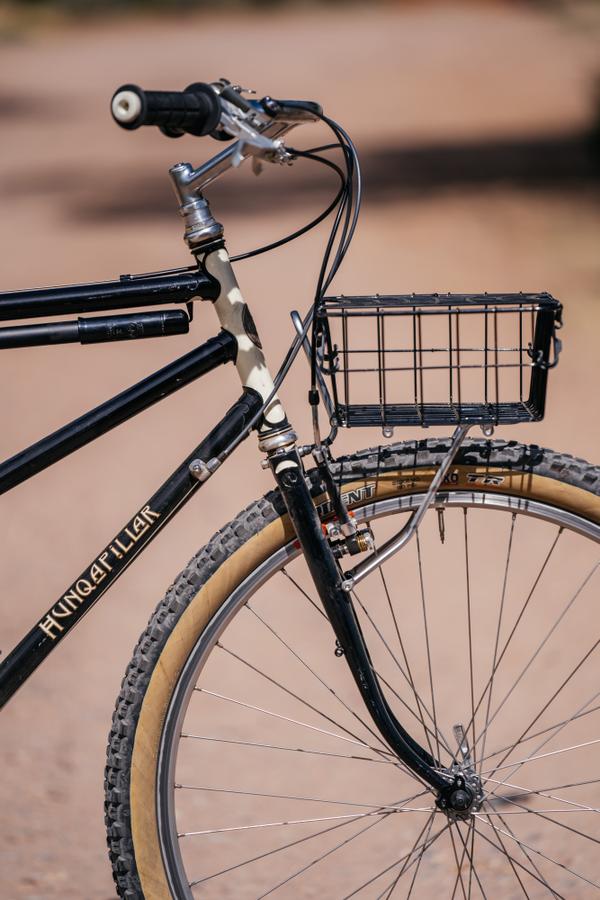 A Nitto Campee rack and, of course, a Wald basket finished the build and added a bit of utility to the bike. I don’t mind doing long, day rides with the basket, nor does it alter the handling. Everyone should have a basket bike. I love the way a Rivendell looks with a front Wald basket. Also, how neat are the double-top tube lugs? 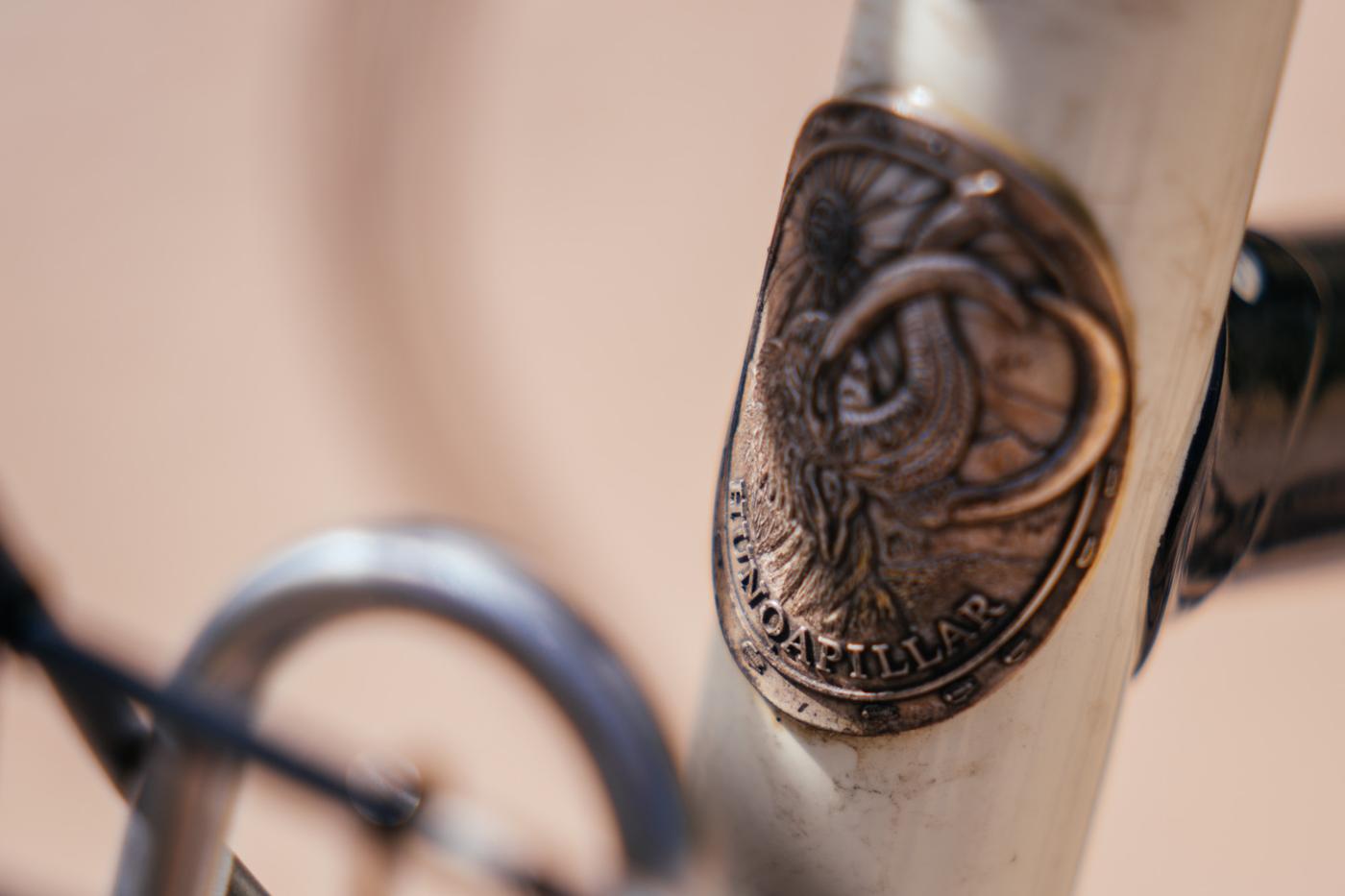 Rivendell puts so much thoughtful energy into the details of their bikes. As an ex-architect, I can appreciate this clear design intent and development. Each bike has a head badge, and the Hunq might be their best ever (I’m biased!) Yet, the details don’t stop there. As previously mentioned, the lugset is specific to the Hunq, with a kickstand plate under the chainstays and a beautiful fastback seat tube cluster. 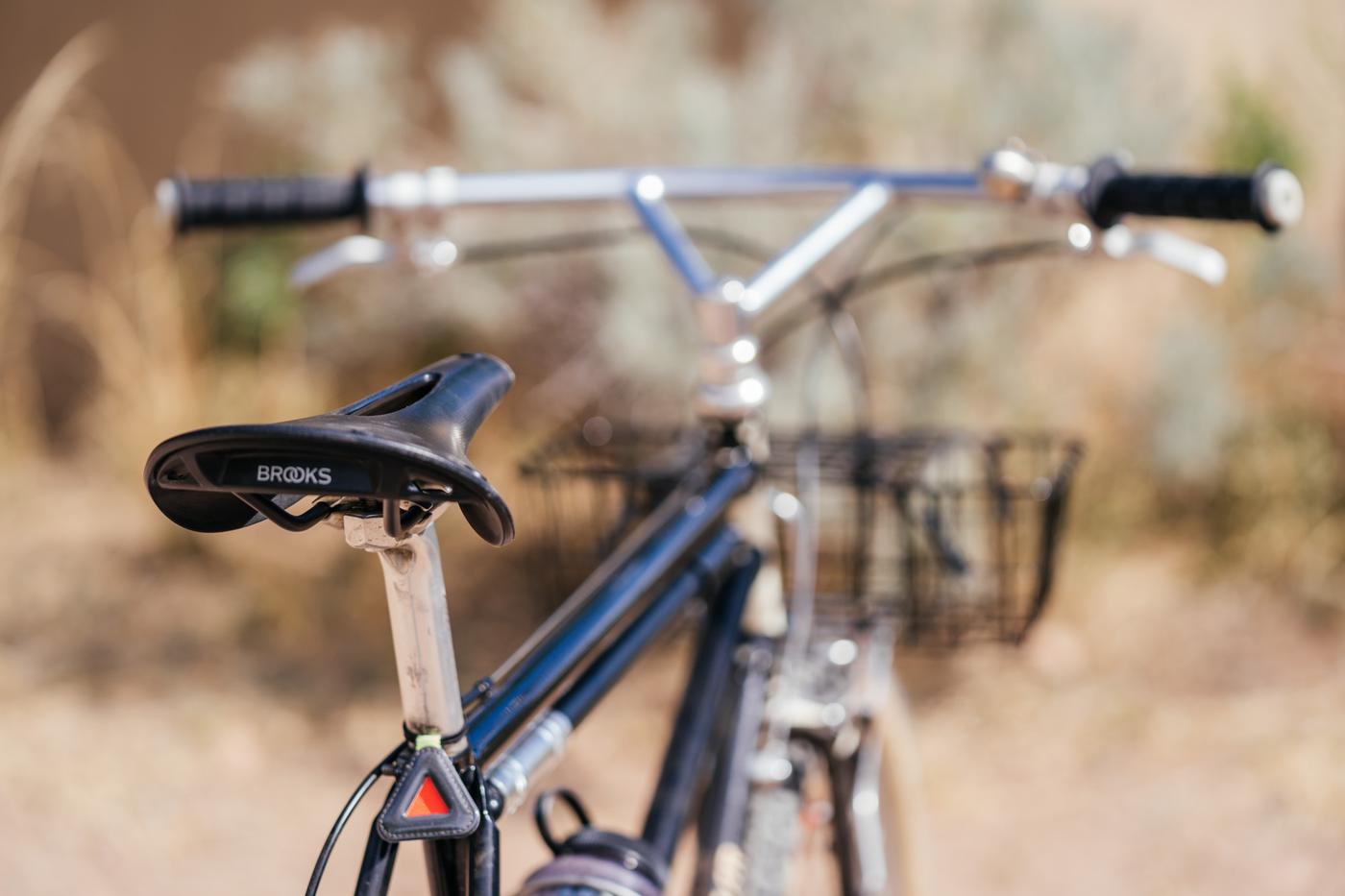 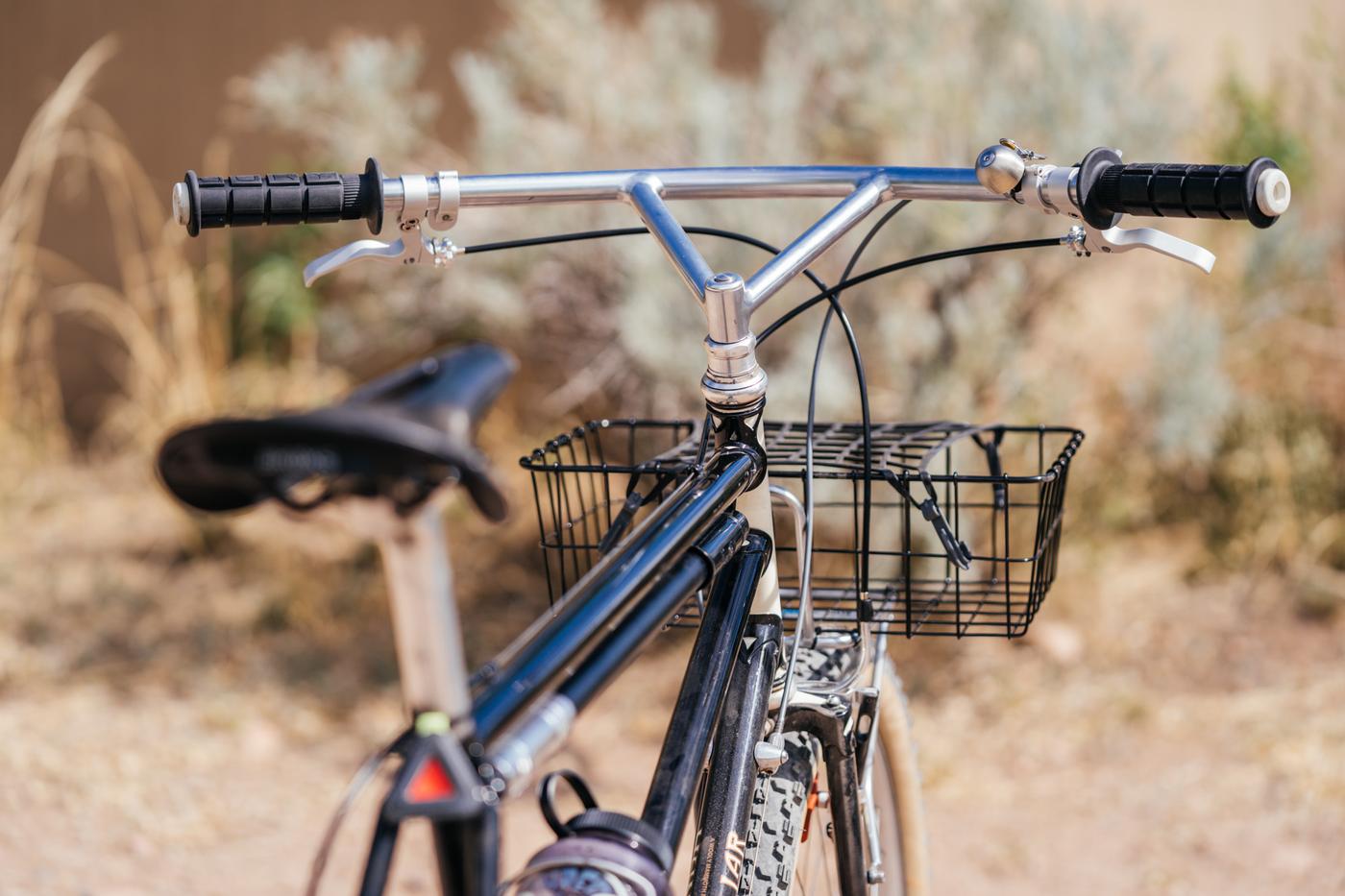 What I love about the bike is the handling, the fit, and the stance. It’s such a rad machine, and the compliments from strangers are never-ending. Ol’ timers love the vintage aesthetic, 8-speed drivetrain, and tourists from the Bay Area always give me a “Beautiful Riv!” as I roll by. As you can imagine, a 62cm steel bike might be a bit too flexy for big tires, yet the double top tube stiffens up the ride. Watching the fork flex across washboard descents is a real hoot too! I really love this bike and am glad to finally join the cult of Rivendell. My summer plans with the Hunq include a few overnighters, a bigger tour in central New Mexico with some friends, and countless coffee/grocery runs. Cari and I love to cruise around town during the golden hour, and let me tell ya, an Elephant NFE and a Hunq are two good-lookin’ bikes!

As for nomenclature, I call this my “Klunkapillar” because I can’t help but think this bike would have been at home in those early days of mountain biking. I know some of you have Hunqs, so let’s see them in the comments!

Thanks to Aron for selling me this beaut. XO, friend.