Finding the right tent for a bike trip is always tricky. It’s all about striking the balance of size, weight, livability, storm-worthiness, and durability that fits you and your plans.

Before heading to Turkey, I knew I wanted to try to eliminate full-sized panniers from my setup, which meant leaving a few things back home and downsizing a few other pieces of gear to make that possible. The tent was one of the first items I looked at since my Tarptent Stratospire 2, while super bomber and massively spacious, is not the smallest option when packed, and probably a little overkill for this trip.

That’s when I landed on the Six Moon Designs Lunar Solo. On paper, at $250 (minus stakes, pole, and seam sealer) and sub-1kg all-in, the Lunar Solo ticked an awful lot of boxes in terms of size, space, and cost, so I gave it a shot.  After a year and countless nights in the mountains of Turkey, the Andean Puna, and the forests of Michigan, I’ve come away impressed. 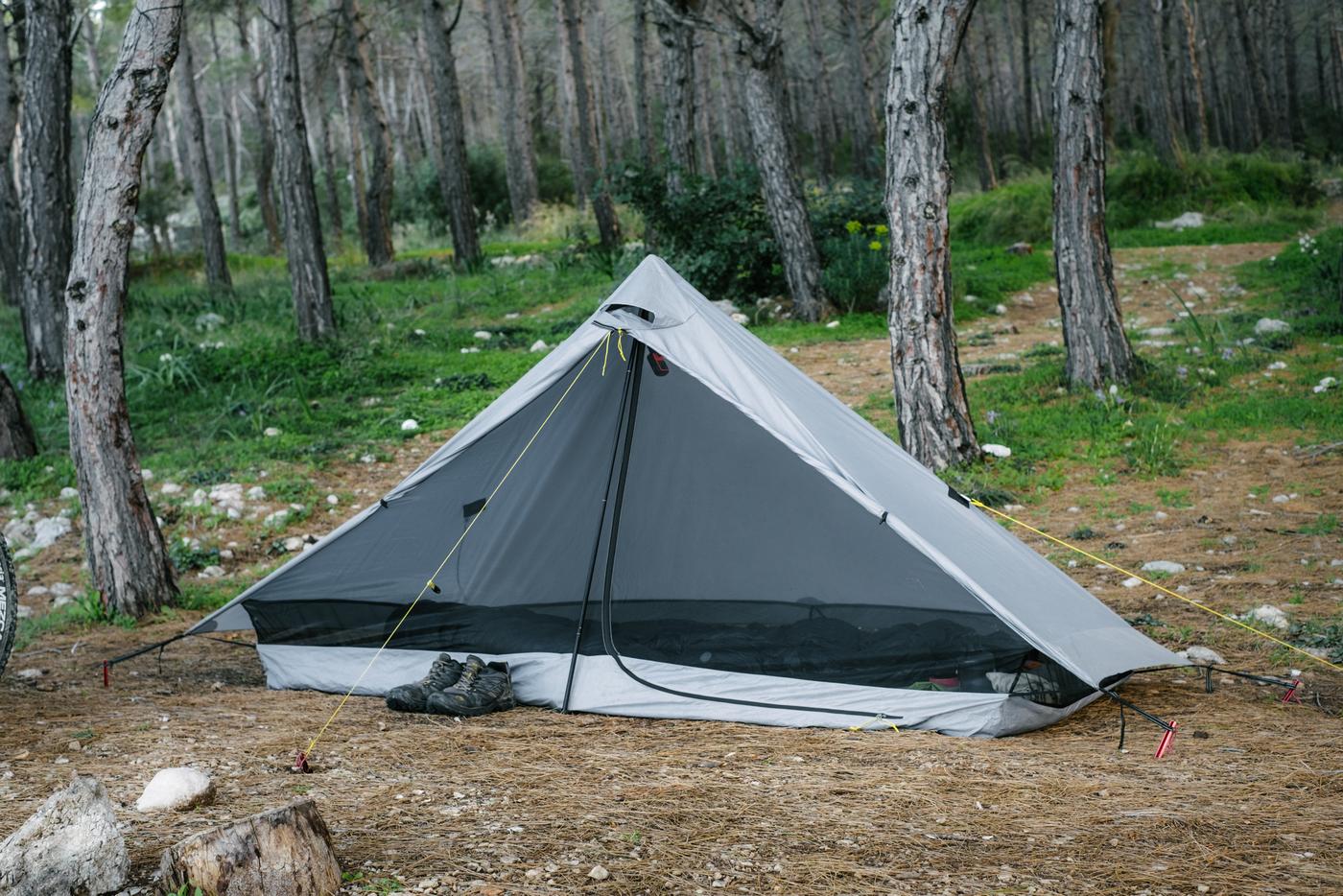 The tent, stuff sack, and guy lines weigh in at about 740g. Add in 90g for a foldable alloy pole and another 60-80g or so for 6-8 stakes and you’re looking at a tent that weighs in at about 900g or 2lb. While it’s not as light as some of the pricy Dyneema options out there, it provides great bang for the buck considering the price tag and roomy interior space. 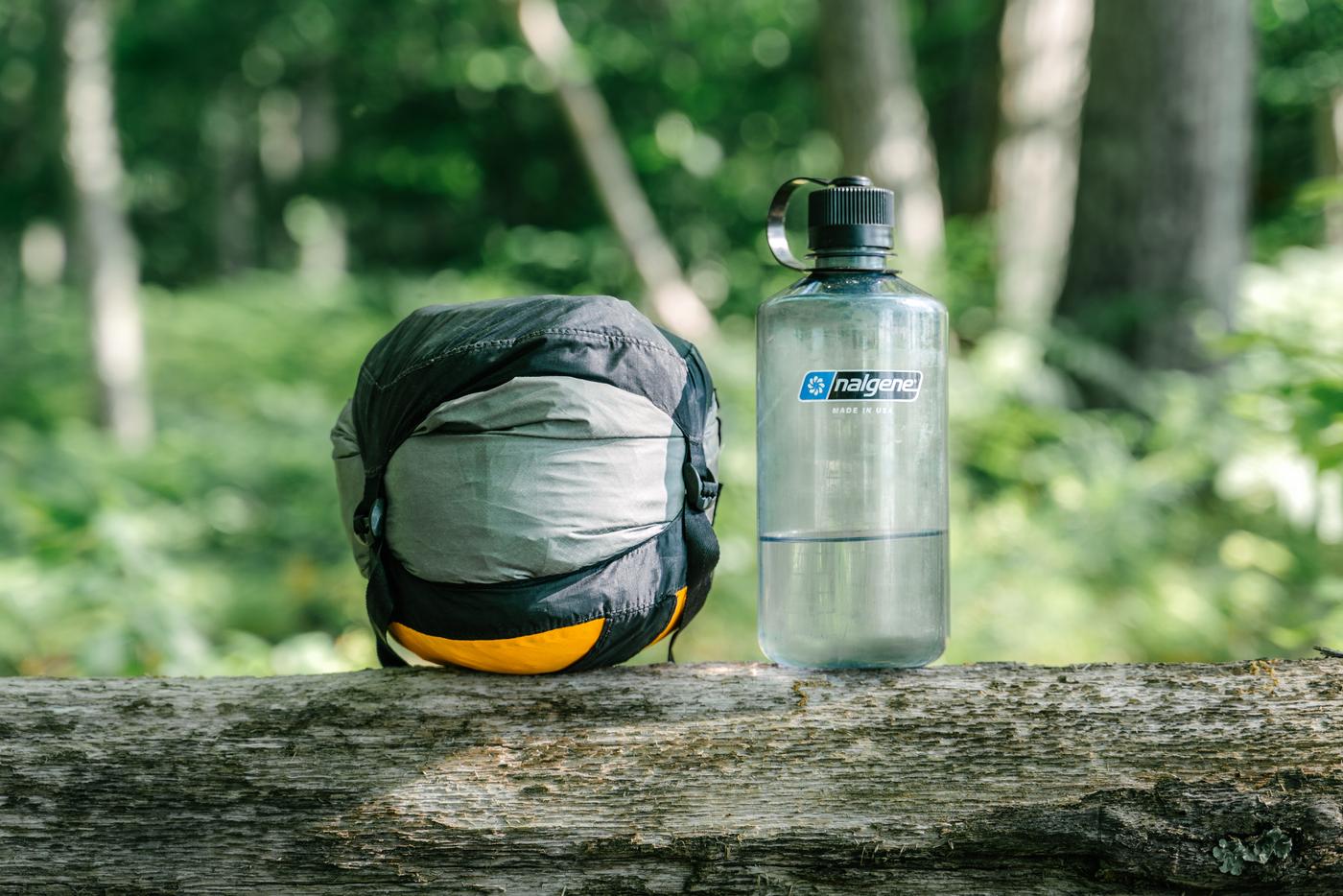 This is absolutely the biggest selling point for me. While a fancy Dyneema tent will always be lighter and certainly has some advantages when it comes to keeping a taught pitch in wet conditions, it cannot match the Lunar Solo’s SilPoly material in terms of packability. Combined with the lack of funky struts and rigid bits to complicate matters, it makes this one of the smallest bug-proof shelters on the market with this kind of interior space when it’s all packed up. It fits easily into my Apidura fork bag with some room to spare, but could be compressed down even more if needed.

As a bonus, the single 49” pole that the tent uses packs up nice and tight when compared to the tangled web of fragile chaos that comes with many dome-style tents these days. I dig strapping mine to the downtube with my Tarptent PolePouch! 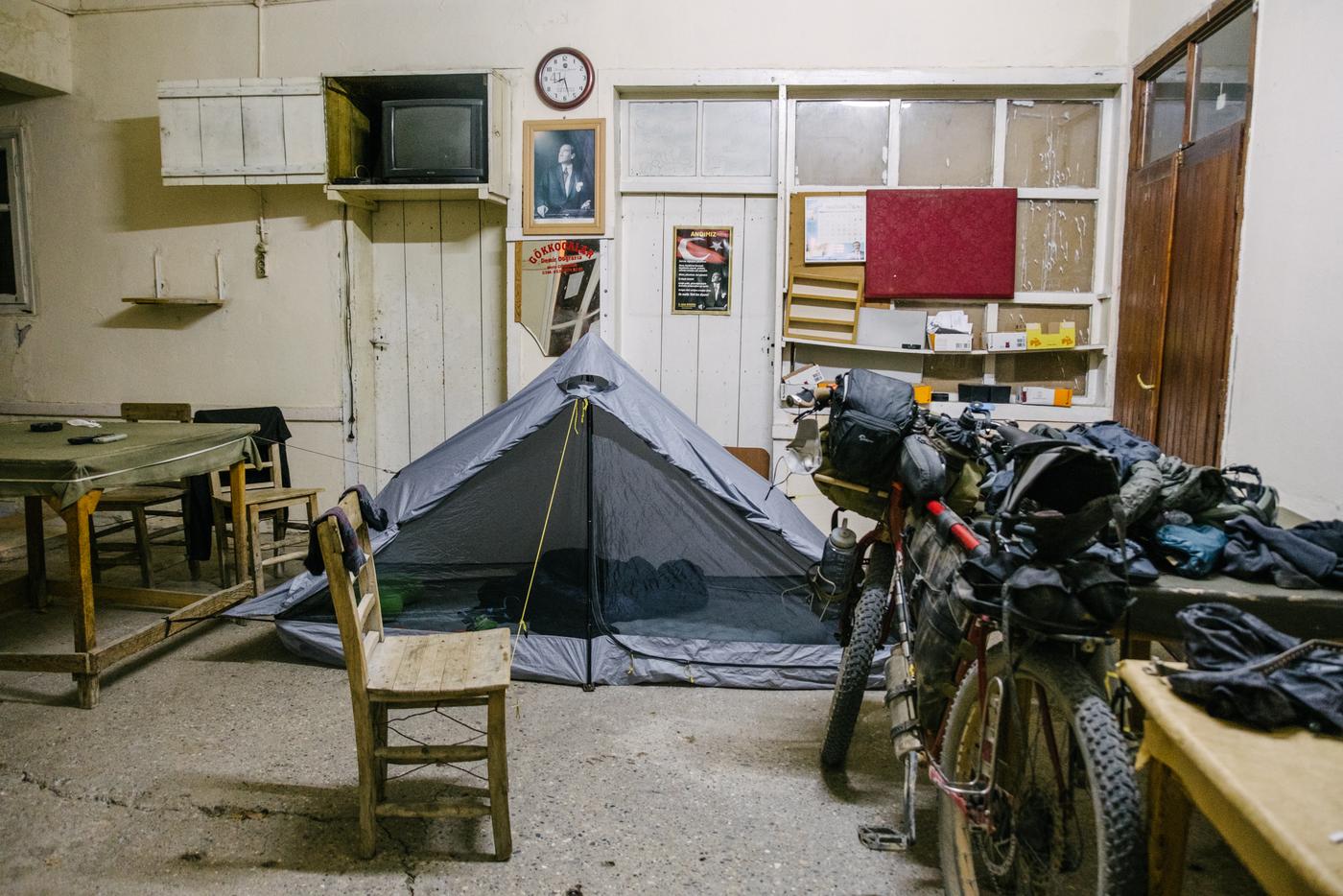 The Lunar Solo is not a free-standing tent, so pitching on hard surfaces definitely takes some extra ingenuity, and you can’t easily move spots once you’ve got it set up. Getting a proper pitch takes a few tries to perfect, but I found that it became quick and easy after a handful of nights getting the hang of it. The overall footprint also isn’t the smallest for a 1-person tent, so you have to be mindful of having enough room to pitch it. 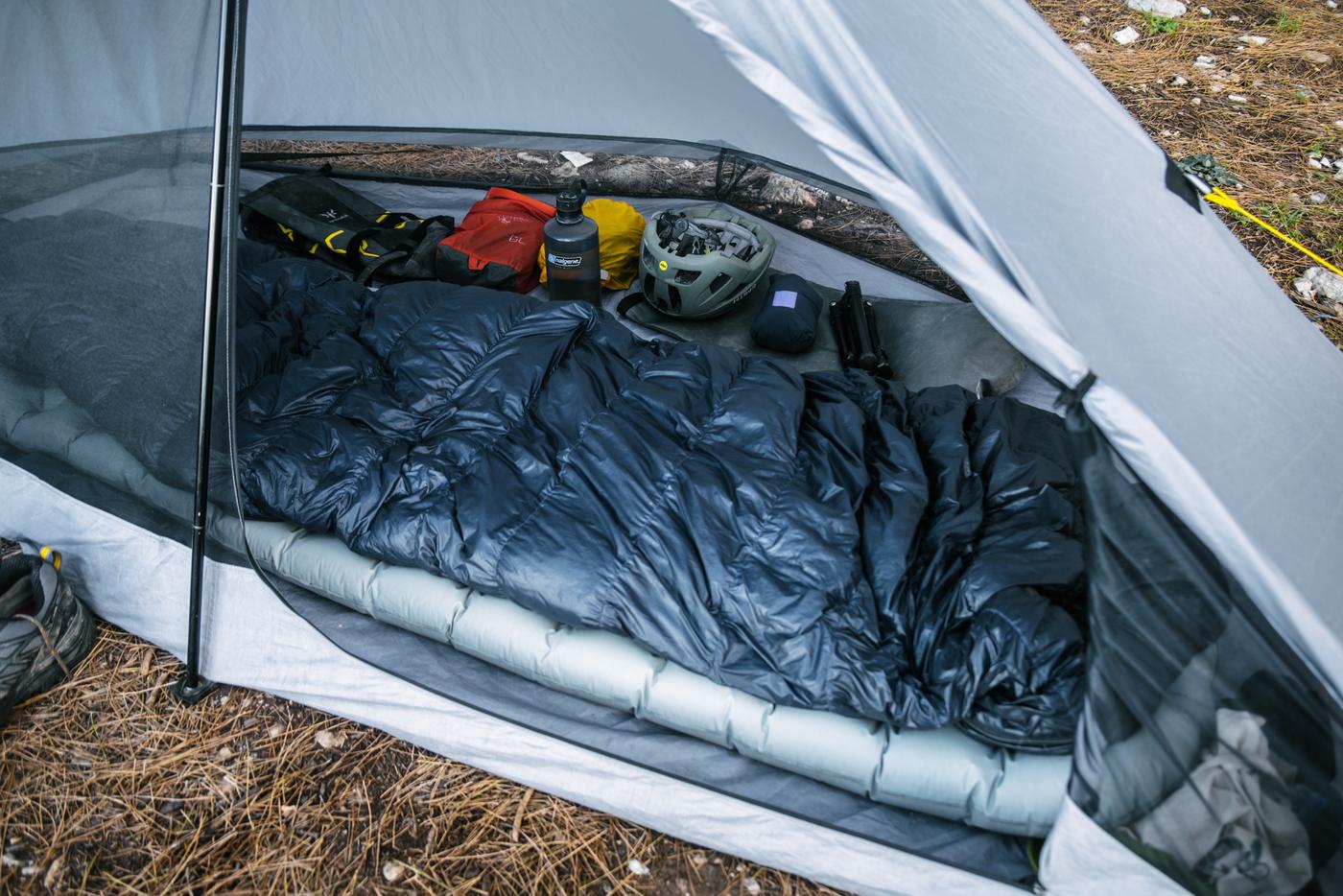 The idea of getting into a claustrophobic cocoon at the end of a long day of riding is not particularly appealing to me, so I will always opt for something that gives some room to breath.  I also prefer to keep as much of my gear inside the tent as humanly possible, so bivy sacks and little shelters you have to crawl into are not my thing.  The Lunar Solo strikes a nice balance as a “1+” tent, providing ample room for a large sleeping pad and enough space to keep all of your other equipment safe and sound next to you.  Inside there’s also a little mesh pocket to stash your phone or other small items as well as a clip from the peak to hang a light or whatever else you’re looking to dangle.

While the inner floor is about 90 inches long, the sloped angle of the walls trims down on the usable space a bit. I’m a shade over 6’2” (1.88m), and on my 4” thick Sea to Summit EtherLight pad, the toe box of my sleeping bag is always extremely close to the wall, if not touching. The tent has guy-line points near the head and foot, which are crucial for anyone over 6 feet tall, and help provide a bit of extra breathing room at the head and foot area. However, If you’re much taller than I am, it will definitely be close.   I’d love to see a Lunar Solo “XL” version that adds just a bit of length and height for us tall folk.

Out front, the vestibule is a decent size, though the design leaves an intentional gap between it and the ground, which means gear stored there has a little bit more of a chance to get splashed during a storm if it’s not pressing right up next to the inner mesh. 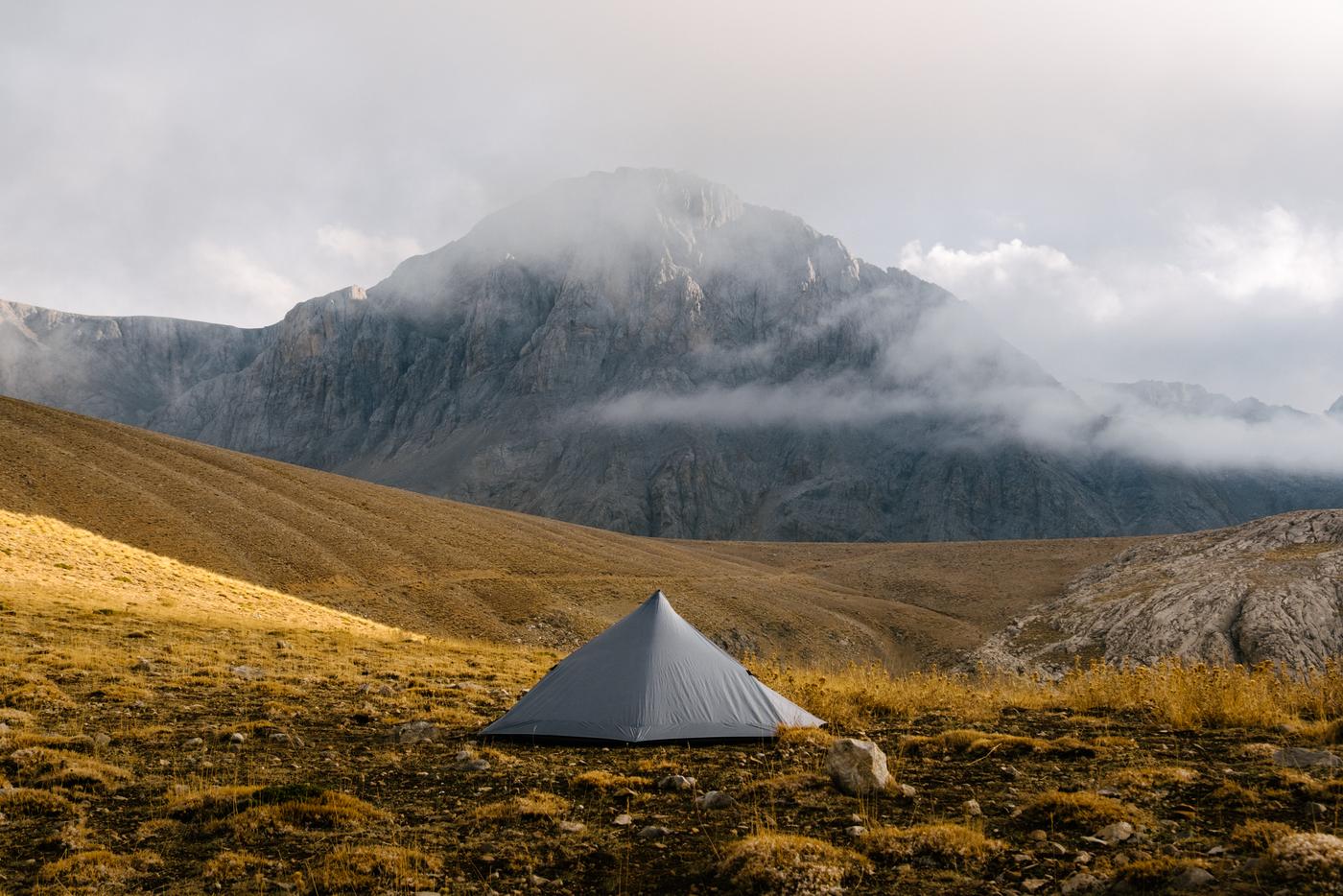 I’ve put this tent through some rough nights over the last year and have come away impressed overall. First, I’ll say that upon initially pitching the tent with the über-light carbon pole that Six Moon Designs sells, I had very little confidence in it. I found that before I got to a tension that I was confident would hold up to windy conditions, the pole would start to bend. So, I immediately swapped to a more beefy (0.49in diameter) aluminum pole that I had sitting around and that felt much better. The result was nice and stable at moderate to strong winds.  If you’re mostly pitching in wooded areas below the tree line, the carbon pole will likely be totally fine, but if you’re heading for unpredictable weather, I’d recommend sacrificing the extra grams for something a little stronger.

In rains, the tent held up just fine. It doesn’t come seam-sealed by default, but once it’s sealed I had no issues with leaks, and no notable splash-back problems as long as I had a proper pitch.

The tent pitches all at once, which is great for keeping the rain out of the inside if you’re scrambling to set up as a storm rolls in (a common occurrence in the Andes). This is a clear advantage over many of the dome-style tents from larger brands, where setup can be a scramble to limit the water that breaches the interior. 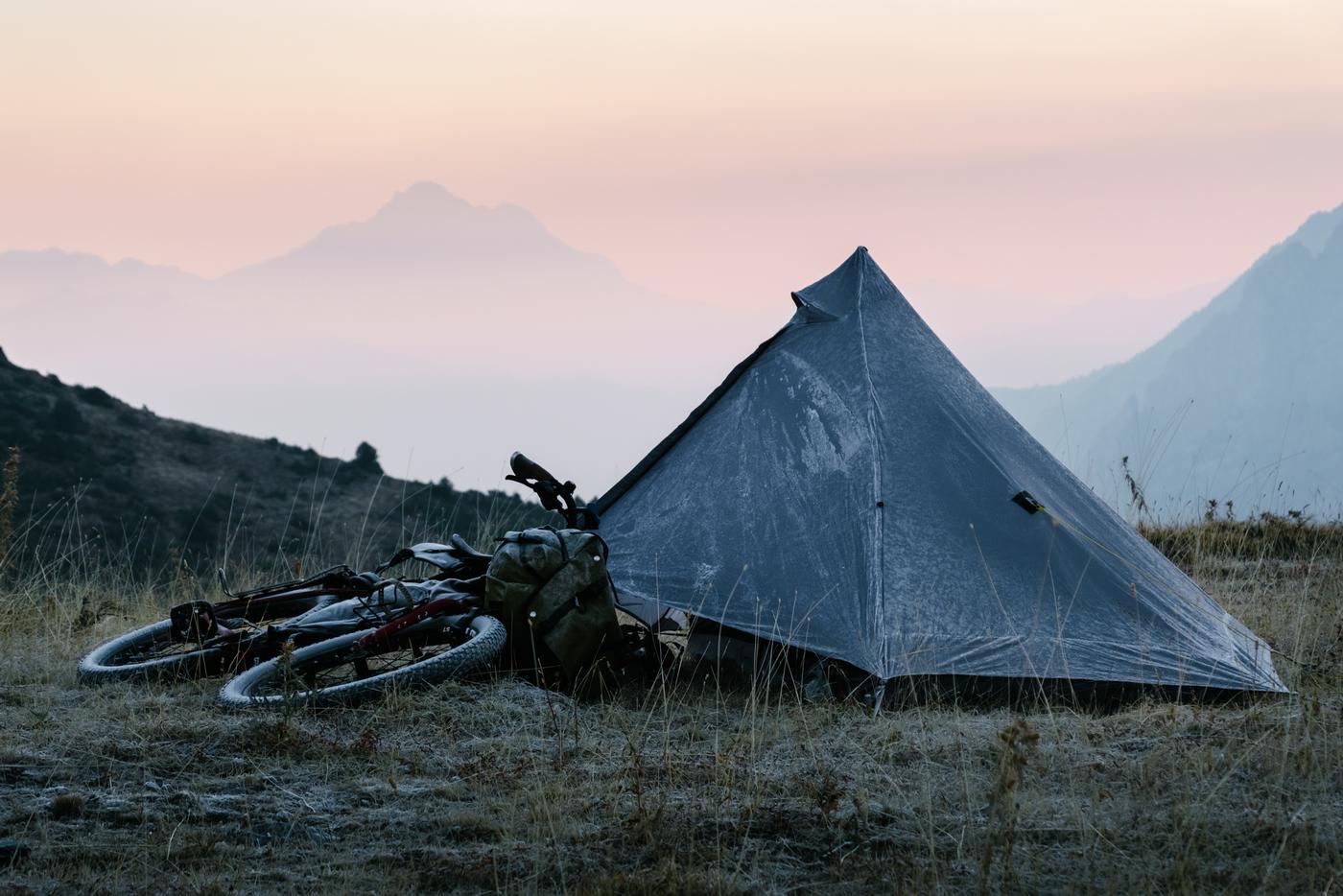 And now the elephant in the room… The Lunar Solo is a hybrid single-wall tent, which means that while you’re completely protected from precipitation via the SilPoly outer shell and bugs via the integrated mesh, there is no layer of mesh to act as a buffer between you and the potentially cold and damp embrace of the outer canopy.

With any single-wall tent, the conversation always revolves around condensation. No tents are immune, but with a single-wall tent, the stakes are higher.  No one likes to have their face brush up against a cold and wet surface first thing when they sit up in the morning, so it’s something you have to be aware of. The Lunar Solo tries to mitigate condensation with airflow. Not only is there an upper vent near the peak, but the front vestibule is designed to be pitch pitched at varying heights, so more or less air can be allowed to pass through depending on how you’ve got it set up.  For me, on nights where it isn’t raining or well below freezing out, I always keep one of the vestibule doors completely open to get the air moving as much as possible. If it’s reasonably mild, I’ll keep both sides of the vestibule open.

Without a doubt, this means that the tent isn’t going to provide as much warmth, so you need to make sure you’re getting enough of that from the rest of your sleep system. And still, if the air is humid enough or it’s raining out, the build-up of condensation is inevitable.

When it’s not raining on a nightly basis, this hasn’t been an issue for me. I always keep a little towel handy to dry off the inner first thing in the morning, if necessary. I also put the toe box of my sleeping bag inside my rain jacket, so if I do brush up against the tent wall at night, it doesn’t get the sleeping bag wet.  While the tent is designed to allow condensation to glide down the sides and out via the surrounding mesh, this does not always work out perfectly, so it’s important to be proactive with the towel before things start dripping in the morning.

The only time it has been a notable inconvenience for me is if the wind picks up after a long night of rain. When the tent walls start flapping, that moisture tends to shake off like a wet dog.   Not a fantastic thing to wake up to.  Still, this problem has only come up on a couple of occasions over the last year+ and just requires some extra attention to minimize. Any ultralight tent in this category will require a certain level of care to keep it lasting through the years, but I’ve found that the Lunar Solo (manufactured in China) has held up well. Some of the edges of the fabric near the seams are not particularly neat and have frayed in a few spots, but this hasn’t been an issue at this point. The 40D floor has also held up very well to the often spiky ground found in the Taurus Mountains, despite not using a footprint.

If you know me, you probably know about my strained relationship with zippers on tents. I’ve never used a tent on tour where the zips have survived the full trip. Too often when companies make ultralight tents they put in these fragile little #3 zippers to shave off a few grams, which are ticking time bombs, and always a weak point in the entire design. No matter how much care you take and how often you try to clean them, grains of sand find their way in and wreak havoc eventually. Sadly, it’s no different with the Lunar Solo, where the inner zips have both failed on me.

I’ll say this though, the design of the vestibule door does seem to help to extend the life of the outer zip, as it’s easy to zip the door down with very little tension on the zipper itself and then slide down the little guy-line knot to give it tension once it’s fully closed. Typically, when I have a zipper fail, it’s an area that tensions using the zip itself, so this design is an improvement over many.   One quirk with the vestibule door is that the little nylon loops it uses to attach to the apex guy-line can be fussy to attach in any condition and especially so when your hands are freezing.

As a general rule of thumb: Until companies start sacrificing a few grams on the spec sheet for burlier zippers, it’s crucial to carry a few spare zipper pulls on longer tours. 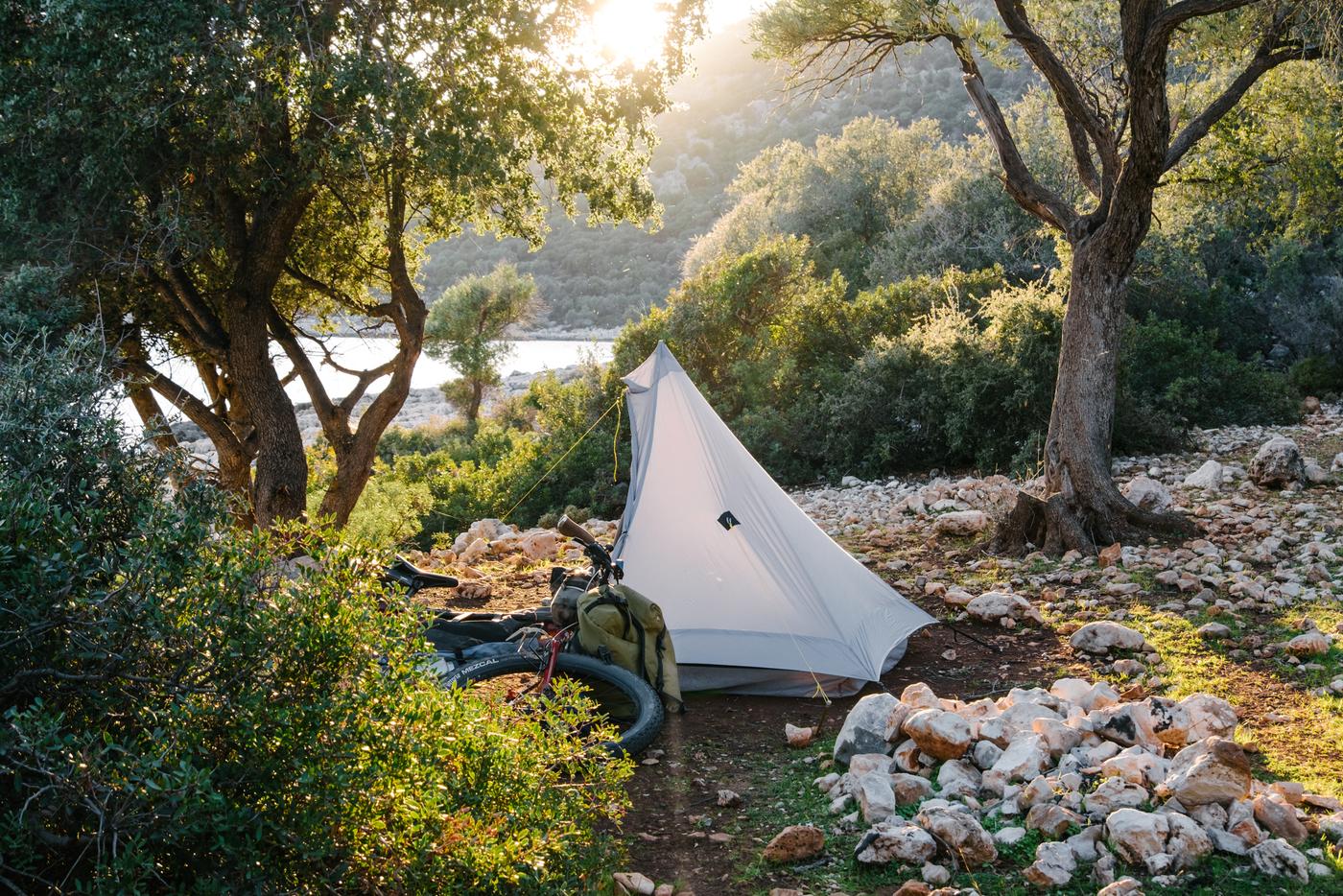 At under $300 all-in, if you’re looking for a lightweight and spacious 1+ person tent that packs up super small, and you’re willing to live with the trade-offs that come with a single-wall tent, the Lunar Solo is a great option. It certainly isn’t the perfect tent for every situation. If you’re going to extremely humid and wet environments, you’ll probably be better off with a double-wall option.  Also, If you have a lot of very tricky places to pitch like rock surfaces or platforms, a free-standing tent will be easier to deal with. However, if you prioritize packed size while still wanting good living space, it’s hard to argue against the Lunar Solo.