From the comforts of the coastal city of Antalya, I took to the surrounding hills for short rides between the abundant days of rain that come with the wet season in this region. Turkey had imposed significant covid restrictions for the first time since I was in the country, including full weekend curfews, so this gave me plenty of time to plan out what kind of route would still be possible when the situation improved.  Accepting sudden changes in plans and having some patience has always been important for bike touring and that is especially true these days. Sitting on the balcony of my hotel room enjoying a dürüm from the local döner spot I’d gauge the snow line on Tunç peak in the distance, trying to get an idea of which options may still be passable amongst the extensive web of paved and dirt roads in this region of the Taurus Mountains. After a few weeks of this, I was getting pretty antsy to hit the road, and the (amazing) Turkish food was taking its toll on my fitness, so I was excited to see a nice gap in the weather time perfectly with the easing of restrictions.

I’d been eyeing the Lycian Way trail for a while. At about 540km, it’s the longest continuous trekking route in the region that has slowly gained popularity for its mix of historical sites, mountain views, picturesque villages, and secluded beach campsites. With a few stints on Taurus mountain single track already under my belt I knew that the extremely rocky terrain in Turkey would not lend itself toward being very bike-friendly (especially while fully loaded), so I was under no impression that I would tackle significant portions of the trail itself. Instead, I mapped out a route that followed it along dirt roads while avoiding most of the brutal hike-a-bike of the single track outside of a couple of spots where the only alternative was the main highway. I hit the road out of the city, making my way toward nearby forest roads that I’d already become very familiar with on my day rides. I had a campsite in mind already, which I’d spotted weeks ago, wondering what the view would look like while perched above the glow of Antalya’s lights at night.

From there I climbed through a few small settlements, taking tips on road conditions from curious locals. A recent warm rain followed by a couple of days of sunny skies had opened up a few options that I didn’t suspect would be passable just a few days ago. Taking full advantage of that opportunity, I climbed up to a track that seemed to be abandoned during this time of year, with no signs of recent tire tracks for large sections, and landslides haphazardly strewn across the road. The only signs of life remaining were the abundant tracks of wild boar. After a night camping atop a quiet ridge, I woke up to fog filling the valley below. A momentary gap in the clouds brought a spectacular alpenglow sunrise that lasted all of 20 seconds before I was engulfed in fog.

I packed up my tent and set off down the 35-kilometer rolling descent. Quickly, I dipped below the line of fog and passed through a village that leads back toward the main road, with no shortage of confused stares from the handful of locals congregating outside, wondering where I could be coming from already at 8 am. A brief stint on the paved road led me toward a nice detour across an open meadow before twisting and turning through the forest. Canyon walls began to rise around me as I plunged to lower altitudes until the mouth of the canyon opened back up to reveal the coastal city of Kemer.

Even with the pandemic going on, I’d seen more than enough of the hordes of tourists and locals flocking to seaside resorts near Antalya to largely stay away from them during my time in Turkey. If you’ve followed along on any of my previous articles on this site, you probably know that this is not exactly my scene. However, the promise of a quiet beach that is only accessible by a gnarly jeep road or by boat? Yeah, I could go for that. 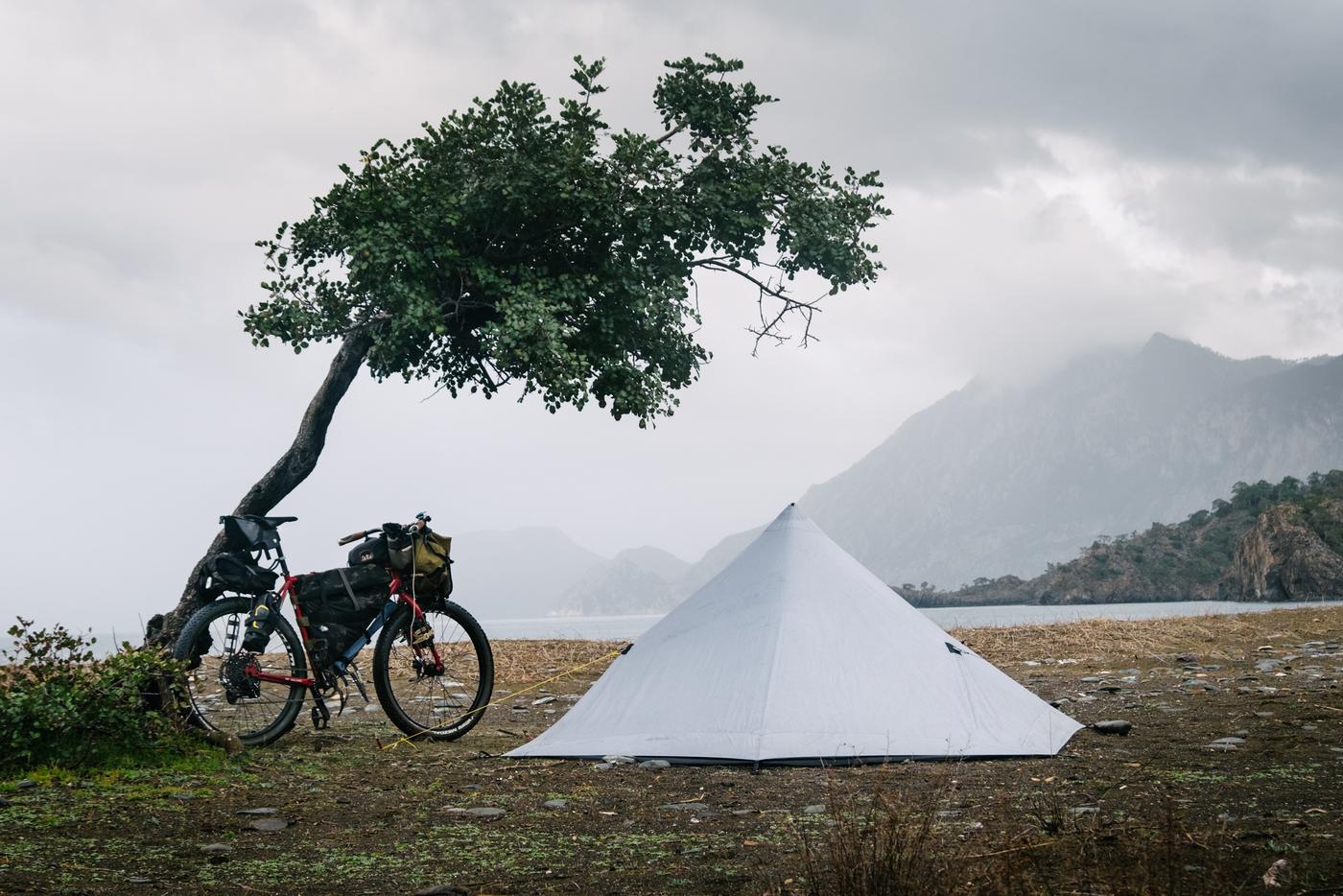 After a night in Kemer, I undulated along a gated 4×4 road that seems to only service the occasional Lycian hiker these days. A few hours of pedaling along the steep trail hugging the sea led me straight to an isolated little cove. As soon as I spotted it from a distance, I knew I’d have to cut short my plans for a long day of riding and take advantage of my own private beach for the night. The next morning I passed through the ruins of Olympus, which date back to the 4th century BC. A small tourist town has formed on the outskirts of the ruins, but it is all but empty at this point with only a few stray tourists around. My dreams of a restaurant lunch were dashed, but the day was young, so I set my sights on riding toward a quiet stretch of coast that I’d heard had some excellent dispersed campsites, which I managed to make it to just as the sun dipped below the horizon. With my Turkish visa running out, I made my way to Finike, where I had initially planned to cut back to Antalya, straight over the high plateau. That night a storm rolled in and dumped snow down to sea level, which I happily took that as a sign to extend my route out a bit further along the coast instead of heading straight for the icy highlands. After a couple of days off to let some of the snow melt, I took a relentlessly double-digit grade road out of town and briefly crept up above the snow line. It was the weekend and a few groups of locals from the city were up in the mountains enjoying the snow and whipping up roadside barbecue feasts, which they kindly offered up to me in the form of possibly the largest sandwich I’ve ever eaten. After piecing together a conversation with them in a mix of Turkish and English for a while, I bundled up and descended the muddy road toward Demre.