Not a bad place to fish

The world works in mysterious ways. Until 2020 hit hard and crashed my plans to return to Nepal (and beyond), I never really had Turkey too high on my radar. Off the top of my head, I could have probably listed at least ten or fifteen countries that I was clamoring to ride in before I’d mention the Mediterranean nation that hugs the border between Europe and Asia. Then a series of events kicked off that resulted in me booking a last-minute flight to the Turkish seaside city of Antalya.

Of course, I brought my bike, but I really had no idea what I’d be able to ride. Often when I head to a country, I already have the basic building blocks of a route in mind. Scouring the internet typically results in ideas from fellow bike travelers who have a similar passion for dirt tracks in remote places, and while Turkey is a place that long-distance cyclists often cross on round-the-world trips, most info I tracked down was from folks taking more straightforward paved routes across the northern side of the country. So with that, I decided to fully embrace my OSM terrain maps and Google satellite images and figure things out entirely as I go. Taking routes that you know are going to be amazing in advance is always fun, but there’s something special about not having a damn clue about what you’re getting into every morning you wake up.

Leaving the coast of Antalya, I made a bee-line for the mountains. The tarmacked road was already radiating 100°F heat at me by 10 am, so I was desperate to gain some altitude. After a couple thousand feet of climbing, I was feeling some serious effects of having not climbed a mountain on my bike in more than 6 months (thanks, Michigan!). Add in the liter or so of sweat I’d lost and things were looking just a little bit grim only a handful of hours into my first day back on the bike. But that feeling was back. Amidst the simple struggle to make it up a mountain road, my brain even allowed a few hours to pass without thinking about viruses and the domino effect for the first time in many months. 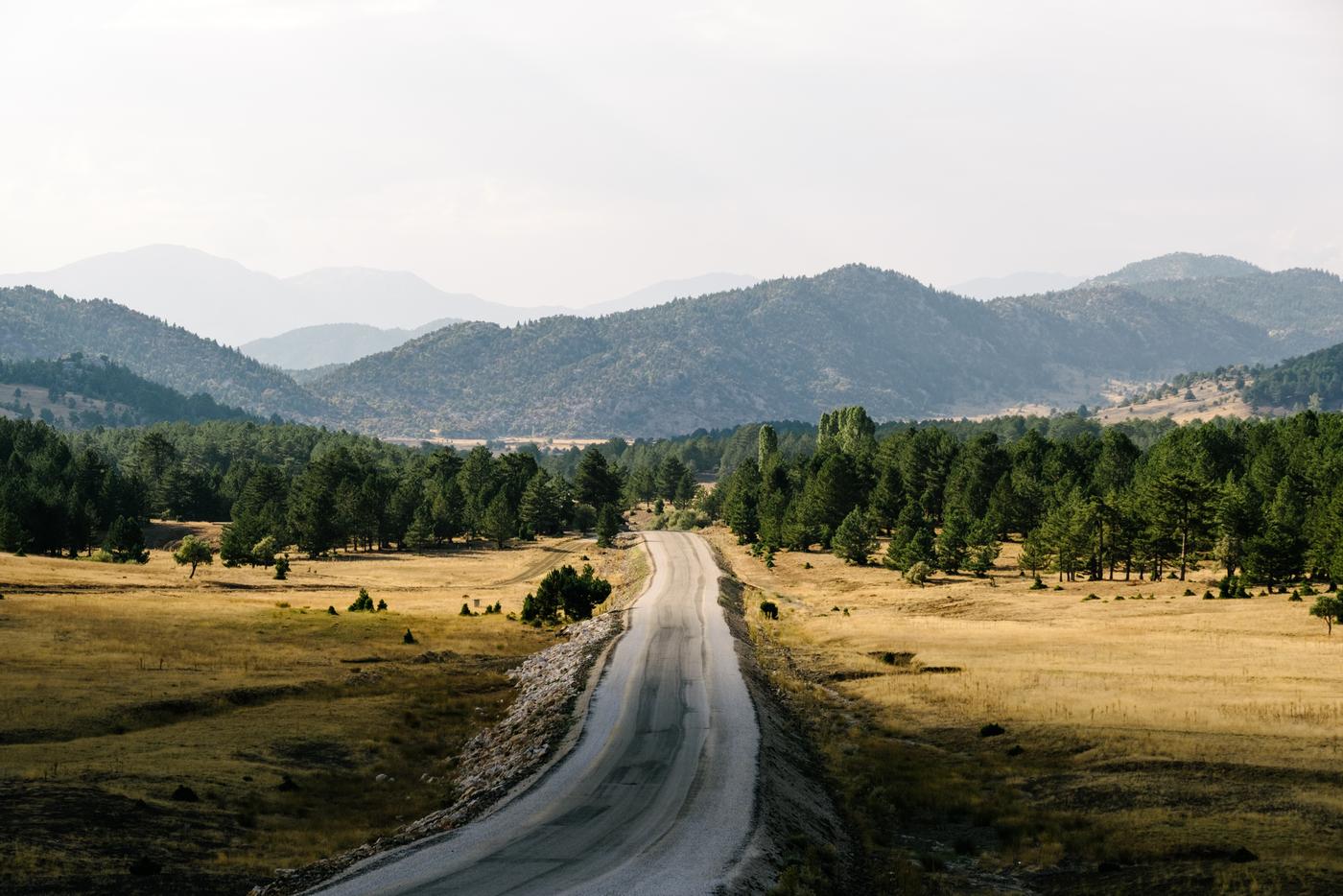 I was stacked with supplies in an effort to limit interactions in smaller towns, so there was no rush to keep pushing on. I retreated to a patch of roadside foliage and enjoyed a relaxing afternoon in the shade while I waited for the evening hours to take the edge off of the sun’s rays.

After a couple of hours, I hit the road again, utilizing the (slightly) cooler temps by riding until every drop of light was gone and then going a bit further still. I set up my tent in the dark and set my alarm for 4 am, hoping I’d be able to make it far enough up the next climb before being melted by the midday sun. After that, I had tentatively planned to stay above 3,500 feet of elevation for the foreseeable future, avoiding the scorching lowlands. The terrain of the Taurus mountains is distinctly Mediterranean, with scattered forests lining the lower slopes, draped along a jagged limestone underbelly. Above 6,000 feet, the trees begin to thin out, and the rugged nature of these mountains is revealed. Up here the paved roads are few and far between. The villages are sparse and seem to be occupied by far more goats and shepherd dogs than people. While it may not be physically far, it feels like lightyears from the fancy resorts and kebab restaurants that line Turkey’s tourist-filled coastal cities.

The call to prayer echoes off of every mountainside five times per day like clockwork. No matter how remote you think you are, that familiar sound always seems to work its way through canyon walls and over hillsides, reminding you that you’re never as far from civilization as it may seem. Camping comes easy around here, with plenty of open spaces, and people that are very friendly toward travelers, though it’s not without a few quirks as I found out less than a week into my time here.

About half an hour after dusk, I set up my tent in a valley down the faintest of 2-track roads, just off of my primary route. Generally, this is a pretty ideal scenario. Not far from the road, but no risk of unexpected visitors stumbling upon me at night.

The final call to prayer faintly echoed from a distant village, and I quickly dozed off. Within a matter of minutes, I was jolted awake by a sound. After sitting up in my sleeping bag, I made myself still to listen closer. At that moment, I heard a thunderous groan and a huge release of air from the nostrils of a very large and very close beastie.

“Hello!?”, I said, quietly hoping that some abnormally large domesticated animal made it over toward my tent in the night.  Odd that in my startled condition I assumed a Turkish cow(?) would speak English, apparently, but here we are.  Another groan was let out, even closer this time. I grabbed my headlamp and unzipped the tent just in time for a large (and annoyed) brown bear to catch a direct glimpse of my light from 20 feet away and stumble around, back toward the rear of my tent.

I left my light on and began talking to the bear in calm but firm tones. “That’s what you’re supposed to do, right?” I thought to myself, having not dealt with a brown bear before. Eventually, the bear slowly began to make its way to the opposite side of the valley, away from my tent. After 30 minutes, I could still hear the distant groans, exhales, and the sound of foliage cracking under the bear’s paws.

It was only 11 pm, so I knew I was going to be in for one long-ass, paranoid, night.

I must have been next-level tired because I somehow managed to fall asleep again just as the sounds got far enough away that I couldn’t hear them anymore. The dream that this bear had been spooked away for good faded pretty quickly when I woke up to it snooping around, just above the head of my tent 30 minutes later.

This cycle of scaring away my new Turkish friend, and having it return later happened six or seven times that night. From then I just committed to staying awake all night and not letting it get close by waving around my light periodically and serenading it with my lovely singing voice. Mercifully, the morning sun came, and the bear retreated up into the cover of the trees. Oddly, it never made a move toward my food stash, which was slung up in a tree further up the valley. Must have just been curious about the strange new visitor in their valley. The call to prayer rang out as I packed up my campsite as quickly as I ever have in my life, and I was never so happy to pedal my way back toward civilization.