Not a bad place to wake up.

One of my favorite aspects of traveling to a new place is discovering the local music. Inevitably, I’ll be at a restaurant or shop and a song over the radio will catch my ear. In my experience, there’s very little that will bring the enthusiasm out of a local like a tourist showing an interest in their favorite local classics, so asking about the song will often open up a whole conversation and a slew of other recommendations. With that in mind, here’s a short playlist of Turkish classics from the ’70s and ’80s that folks turned me onto along the way:

After another night listening to the waves crashing against the coastal rocks from outside my tent walls, I made my way to the ruins of the Ancient Greek city of Myra. Once one of the largest cities in the Lycian League, thousands of years ago, now it sits on the edge of the Turkish town of Demre, with tombs cut into the side of the mountain. Nearby, loads of empty tourist shops stock year-round Christmas souvenirs as this ancient city is known to be the birthplace of old Saint Nicholas himself. Surely in “normal” times, this place must get pretty busy, but on this day, I was the lone visitor. 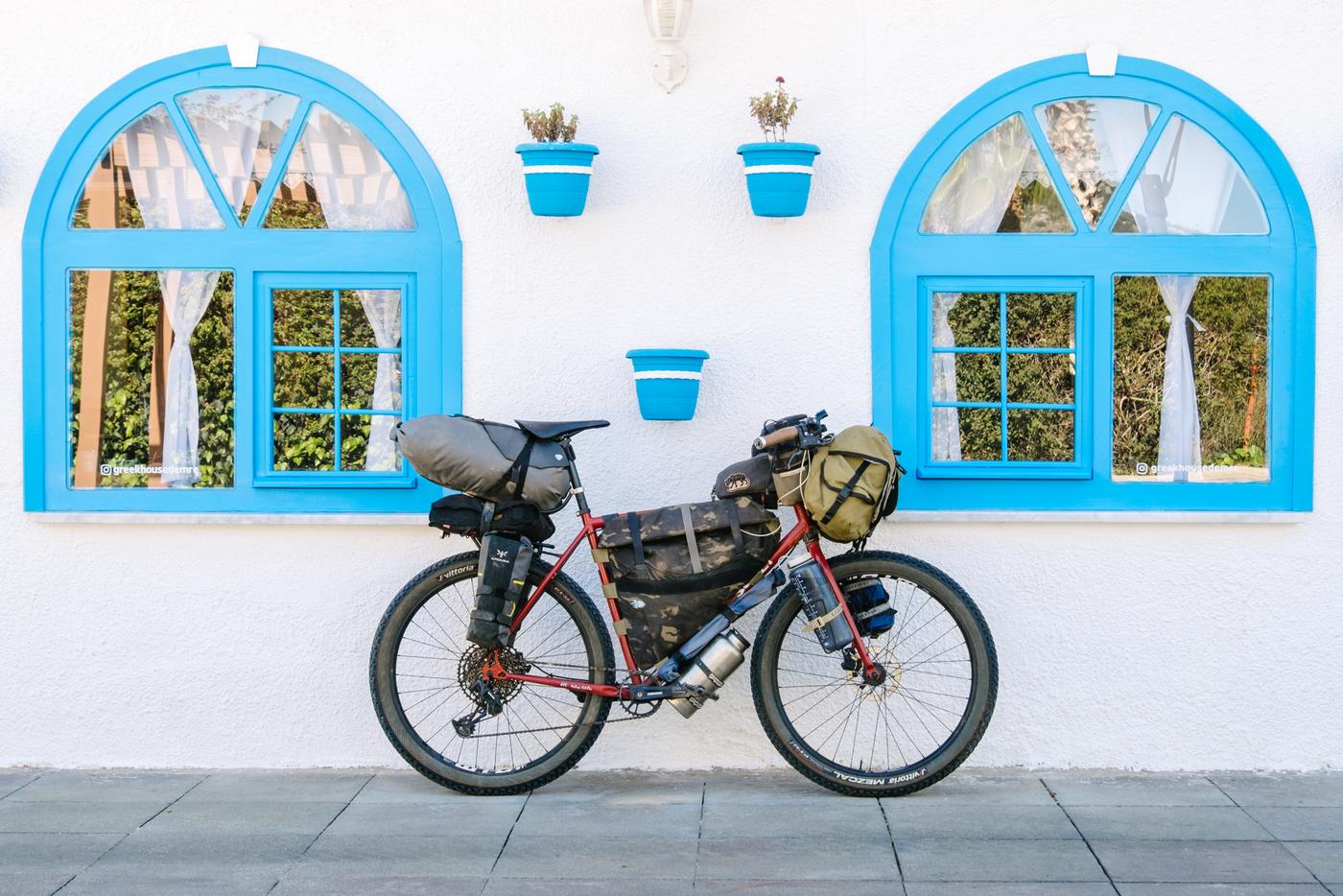 From Myra, I climbed along a quiet paved road that undulates amongst the rock-strewn hills. A few small towns are nestled inside dips in the topography. The call to prayer from the mosques in each village echos off of the surrounding mountains simultaneously.

The villages on this road became smaller in size the further along I went. Eventually, I knew the road would run out altogether, but not before a nice dirt track descended toward the sea.

Here I’d have my first taste of the Lycian trail proper, with a tiny 2km stint of absurd rock hopping, bike-carrying, self-cursing, thorn-stabbing, and shin-smashing “fun”. A few hours of that went by before the end of the trail mercifully came into view. A few police officers were hanging out at the beach, catching a glimpse of me dragging my poor bike over the final section of boulders with a puzzled look on their faces, wondering what I was doing. They pointed toward the road, which was a big relief to see, even if its gradient wasn’t particularly friendly upon first glance. It was at that point that I swore off dragging my loaded bike along Turkish trekking paths for the foreseeable future.

I continued up the coast briefly before catching a glimpse of the high mountains, which tempted me enough to change my plans and map out a route up toward the Elmalı plateau. Here, the vibe is totally different. Snow covers the surrounding mountains. Many of the smaller villages above 1500m are still all but entirely abandoned for winter, with only a few inhabitants willing to endure the unpredictable weather.

One local came down to the road as he saw me climbing up through his village. We shared stories of chilly nights and he showed me a picture he took on his phone of a set of huge bear prints he found in the snow a couple of days prior. While I’d had plenty of recent nights questioning the sounds of wild boars getting into mischief near my tent, it had been a while since I’d heard much about the Turkish brown bears, whom I don’t care to have another interaction with anytime soon.

Around here it’s actually not the bears that locals will typically warn you about. Instead, the number one thing people say to look out for is the massive Kangal shepherd dogs. These can grow to be absurdly huge and are known to be very protective of the herds of animals they’re trained to protect. There are few sounds as unwelcome to a cyclist in the Turkish mountains as the thunderous bark of a Kangal who has spotted you from a distance. Often these shepherd dogs are sporting a collar of impressive metal spikes. It’s not there just to make them look even more badass and intimidating (that’s just a bonus), the real function is to deter the wolves and bears from trying to attack their necks, should a confrontation occur. It’s also common to find the dog’s ears have been cut short to prevent a worse injury from occurring during a fight with a wild animal and also to improve hearing.

Up on the plateau, it’s not uncommon to encounter 10+ shepherd dogs per day, and while many simply bark from a distance as a warning shot, that’s not always the case. People often ask about my approach to dealing with aggressive dogs, so here’s what I do: Continuing along the plateau, I made my way to the lovely mountain town of Elmalı before an isolated climb over a snowy pass that obviously wasn’t getting much traffic at this time of year. The arid terrain here is so different from the other side of the mountain where I’d spent the last handful of weeks. Here, the high mountains block most of the coastal rains, creating a stark contrast from one valley to the next. A calm (and bear-less!) night camping outside of the village of Ovacık would make for a nice final send-off as I would soon rejoin the paved road and cruise back toward the familiar shores of Antalya before packing up to head home. It’s funny to think that before this trip, Turkey was so far off of my touring radar. Then, a handful of circumstances accumulated and I found myself there for many months on end. In the final weeks, I was even reluctant to leave. “Maybe I should just push this on into the summer, head for the Black Sea, and up into the Caucasus?”. It was more than a little tempting.

It can be so easy to have a preconceived notion of a country painted in your head based solely on the things you see in news headlines, or from curated images of the same three tourist hotspots you see repeated endlessly on social media. But experiencing the nooks and crannies of a country and the culture in person and approaching it with an open mind is always revelatory. The hospitality of the people. The sense of humor that can’t be slowed down by any language barrier. Their excitement to share their culture with you. The diversity of the land. Seeing places that you had no idea existed before being there and witnessing them for yourself…  Sonra Görüşürüz Türkiye