Let’s not sully the holy sanctity of this article with such petty things as single speed arguments (for or against). What a cliché. If you’re new here, suffice it to say there are all sorts of reasons—from cost to curmudgeonliness to cache—to ride single speed mountain bikes. Those reasons don’t necessarily make sense. If you’re a regular reader, you already know how 1-speed bikes fit into today’s bike culture…enjoy your unsullied reading.

This article is about the bond shared by single speeders and how events like Single Speed USA (SSUSA) carry and strengthen them. I also want it to be about bikes as well, as I know more than a couple of people here might be into them. 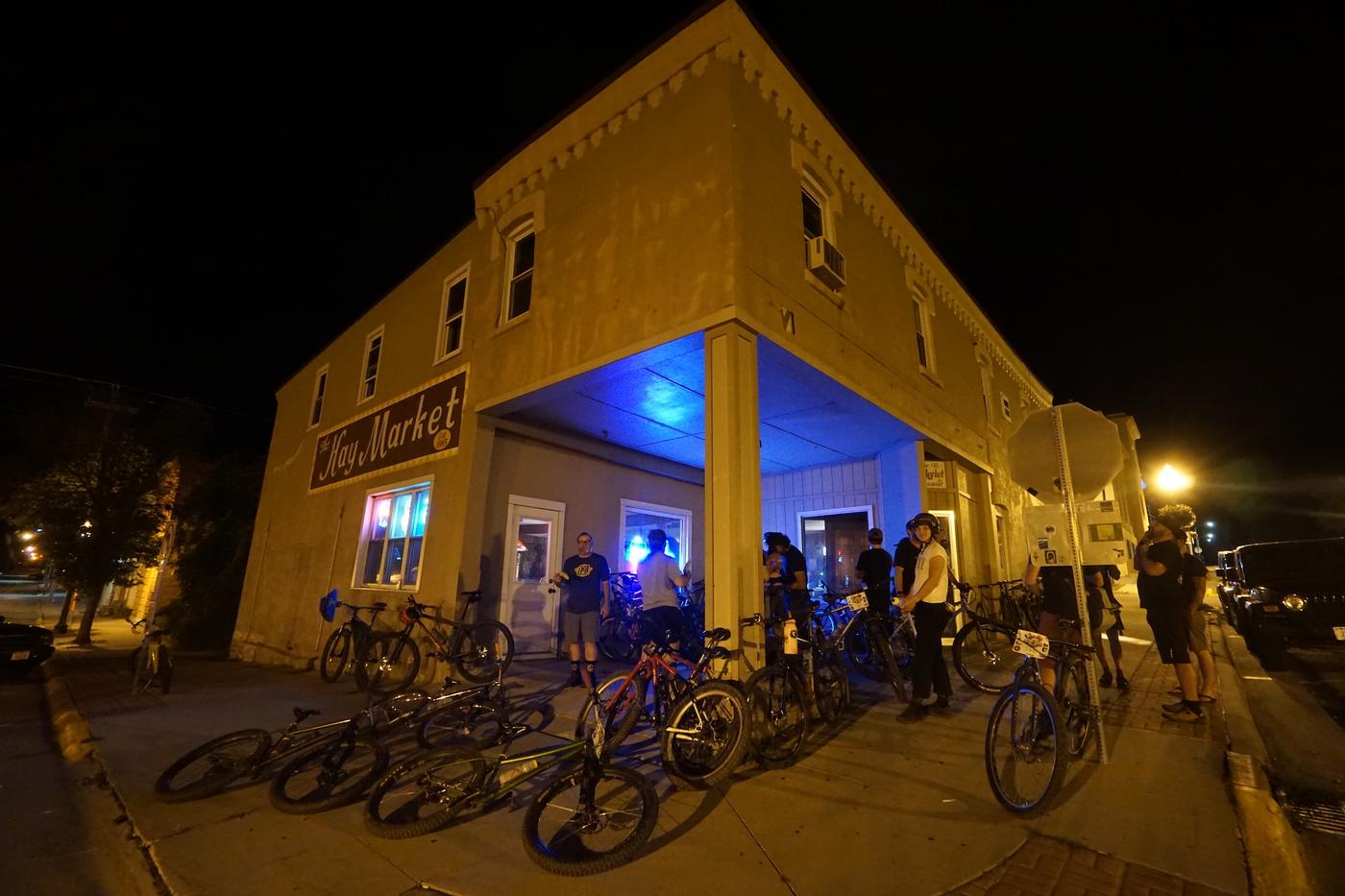 SSUSA is a single speed mountain bike “race,” “event,” “gathering,” “imagine over used air quotes here,” weekend that travels around to different places in the United States. The general format is a bike race with a small number of people who are interested in being the fastest at, a couple games of footdown to decide the men’s and women’s champions and holders of the champions’ belts, as well as another contest or two to decide who hosts the following year. 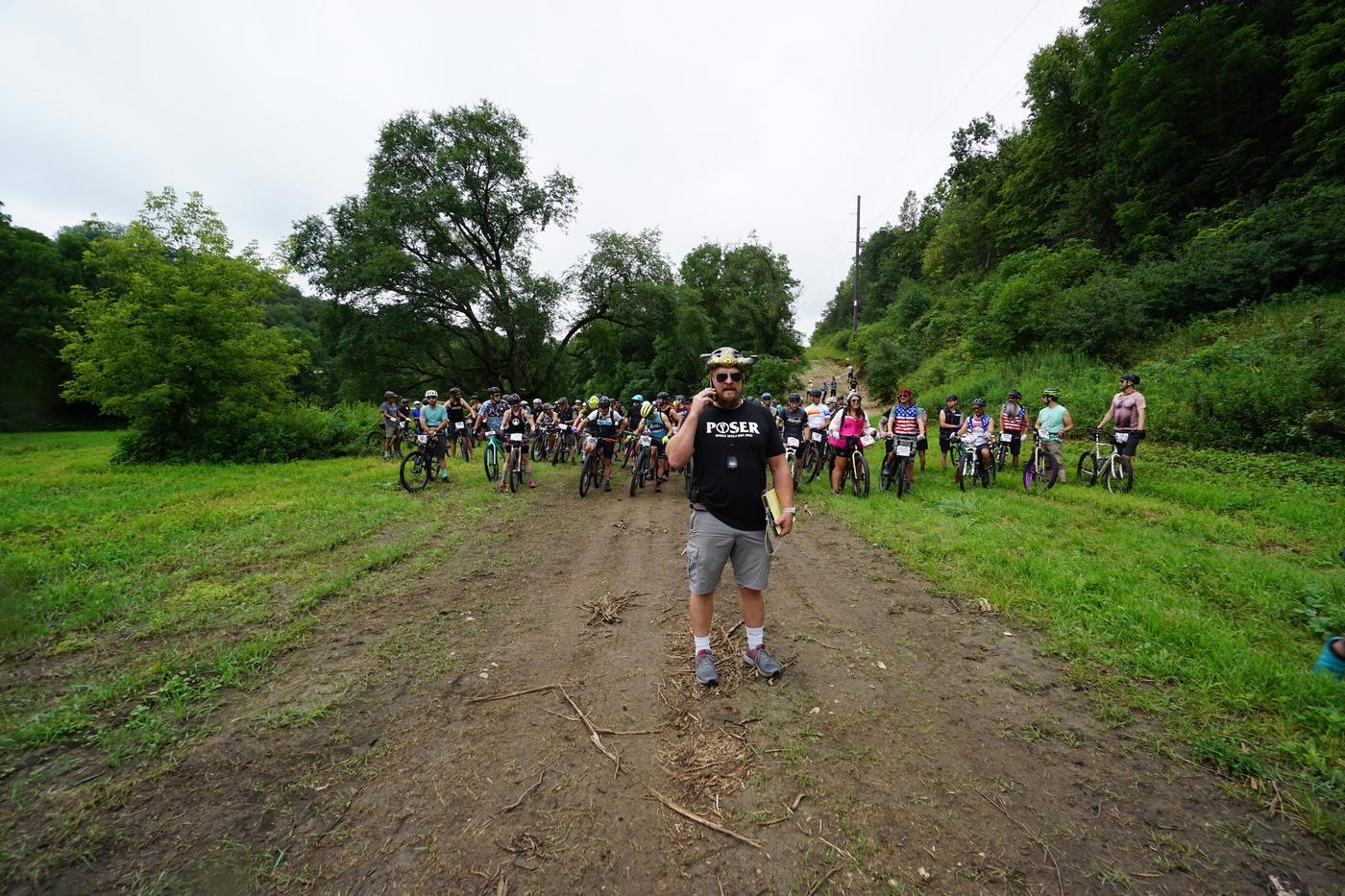 Jesse Ryerson, or “Spinner” to most, brought the event back to Iowa from Maine, where last year’s event was hosted. Spinner did the best job of riding a kids bike through a skills course and down some skinnies. Fun facts about Spinner: his name appears on the belt twice for 2013 and 2017. He also had my mother for a high school teacher back in southern Minnesota where he got his nickname from spinning off would-be tacklers playing high school football. Foam hats off to Spinner for hosting an awesome event that had all the makings of a good time 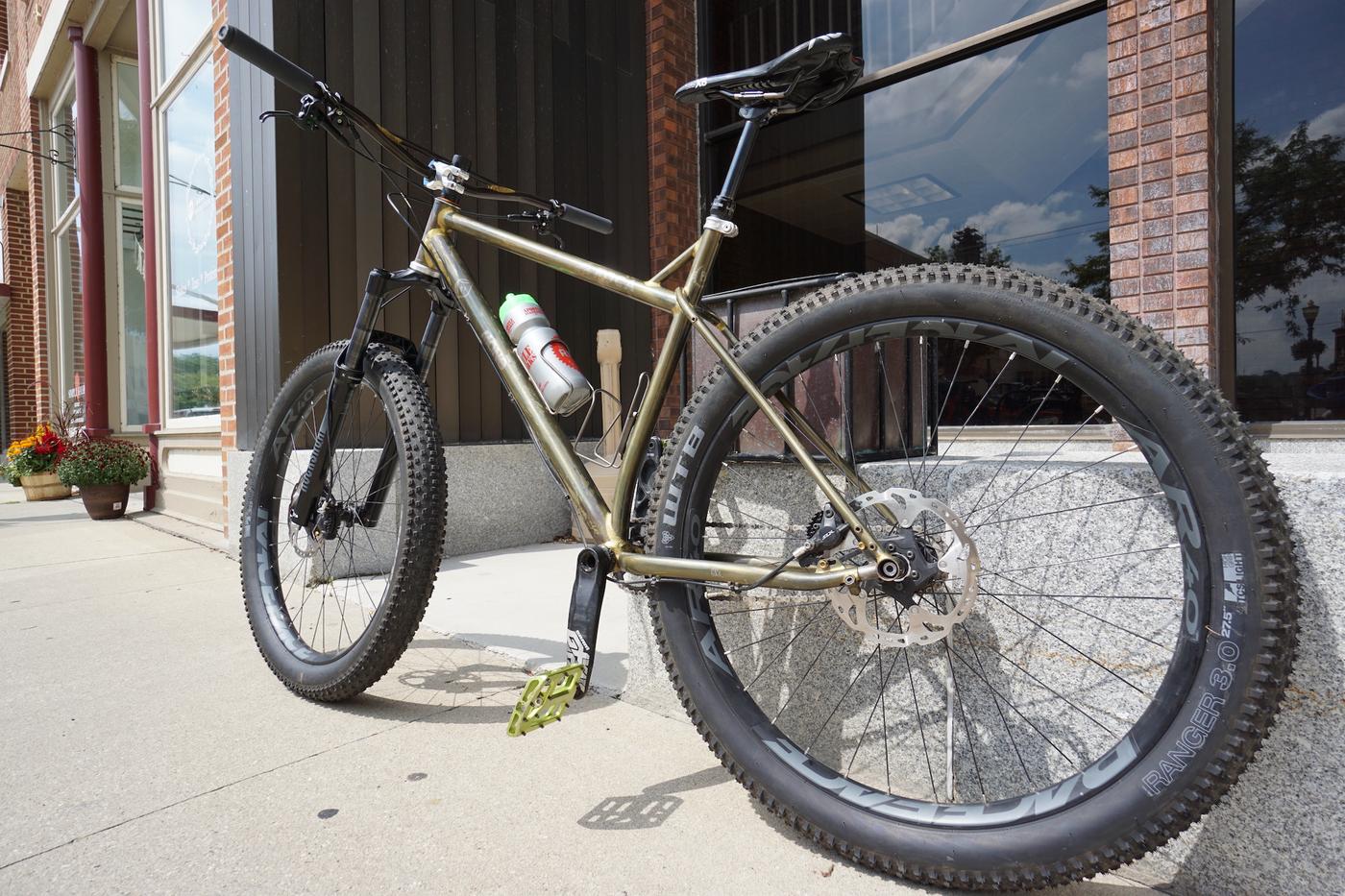 I grew up three hours from Decorah, Iowa, so a trip home to see the fam plus a single speed event were reason enough to get me on an aircraft, or four. Since flying with my bike isn’t my idea of a good time, it got me to thinking that maybe my buddy Adam in Wichita might be driving up and maaaaaybe he’d lend me his Monē Bikes La Roca. Bingo. Adam could ride his drop bar Monē El Continente or his super rare (1 of 2), four-bar, hand-brazed Monē full suspension mountain bike. Or an old Schwinn; who knows. Needless to say, Adam and I have similar bike taste so it worked out great. Adam single-lated his Full Enjoy brazed full suspension bike that I sold him a few years back, and set his La Roca up special for me. It was a super rare pre-production La Roca formerly owned by Bicycle Pubes himself, which not only adds countless amounts of monetary value, and also a few scrotums inlaid on the Turbo Midnight finish. 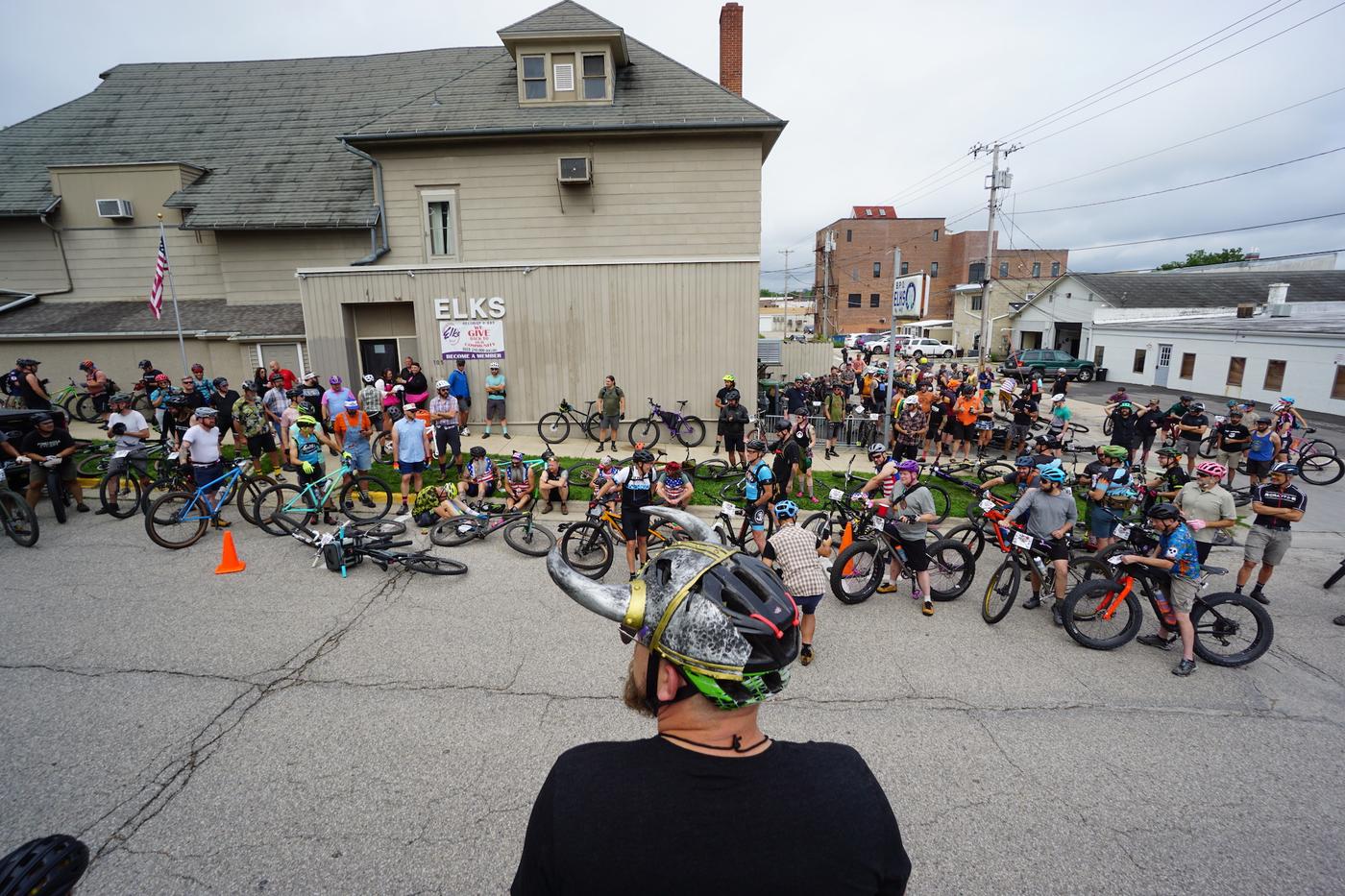 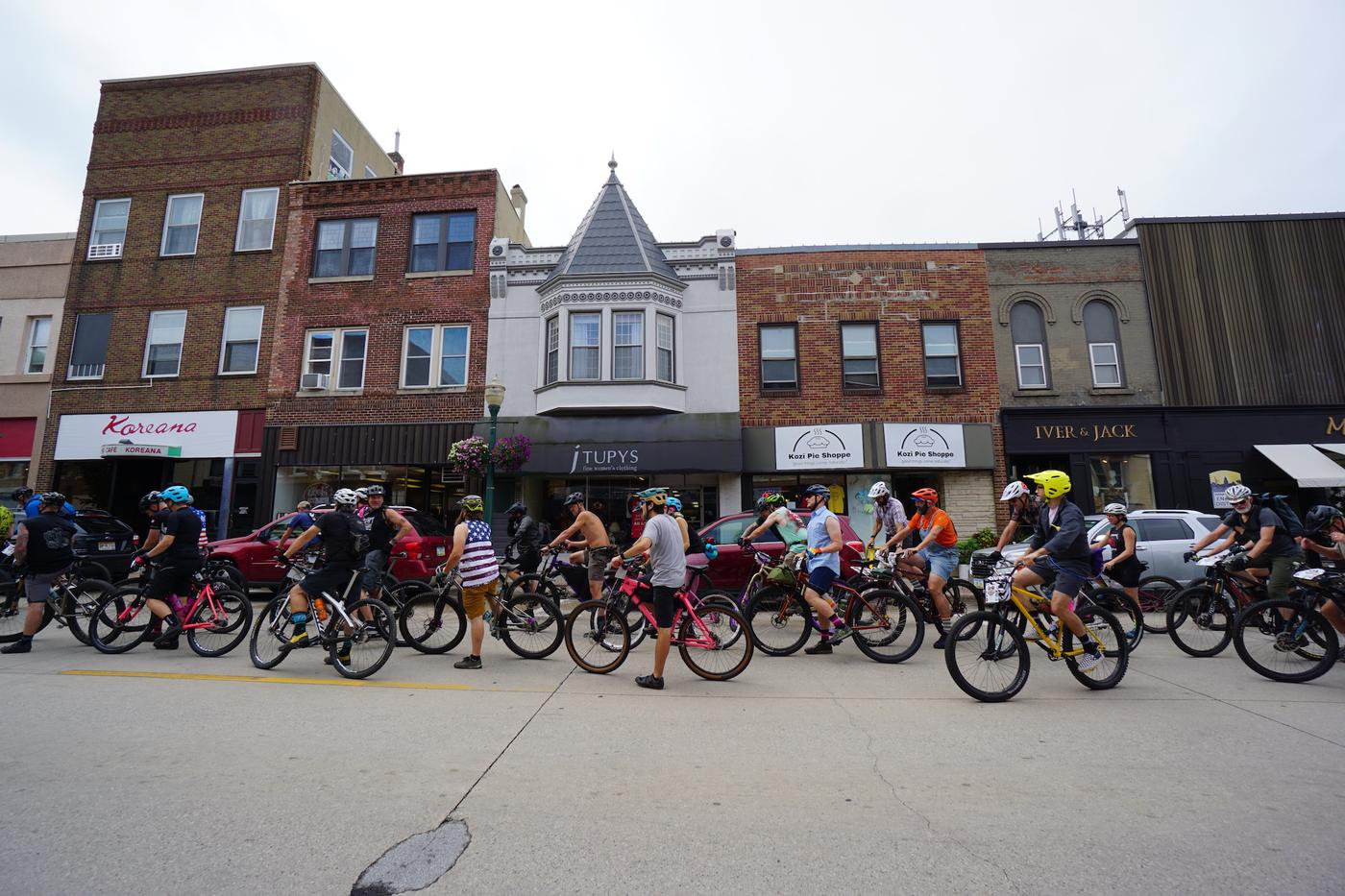 Decorah, IA is located in the northeast part of the state known as the “Driftless” zone. Drift is the smutz that a glacier leaves behind. The Driftless zone had less hot glacial action and less of the landscape-filling drift material and, as a result, the landscape is dominated by big bluffs and bedrock-exposing relief. It’s pretty there—and not just for Iowa—and is actually a really great place to ride some bikes.

The town itself has a big old timey midwest vibe complete with more than a few Amish driving horses from blacked-out carriages. 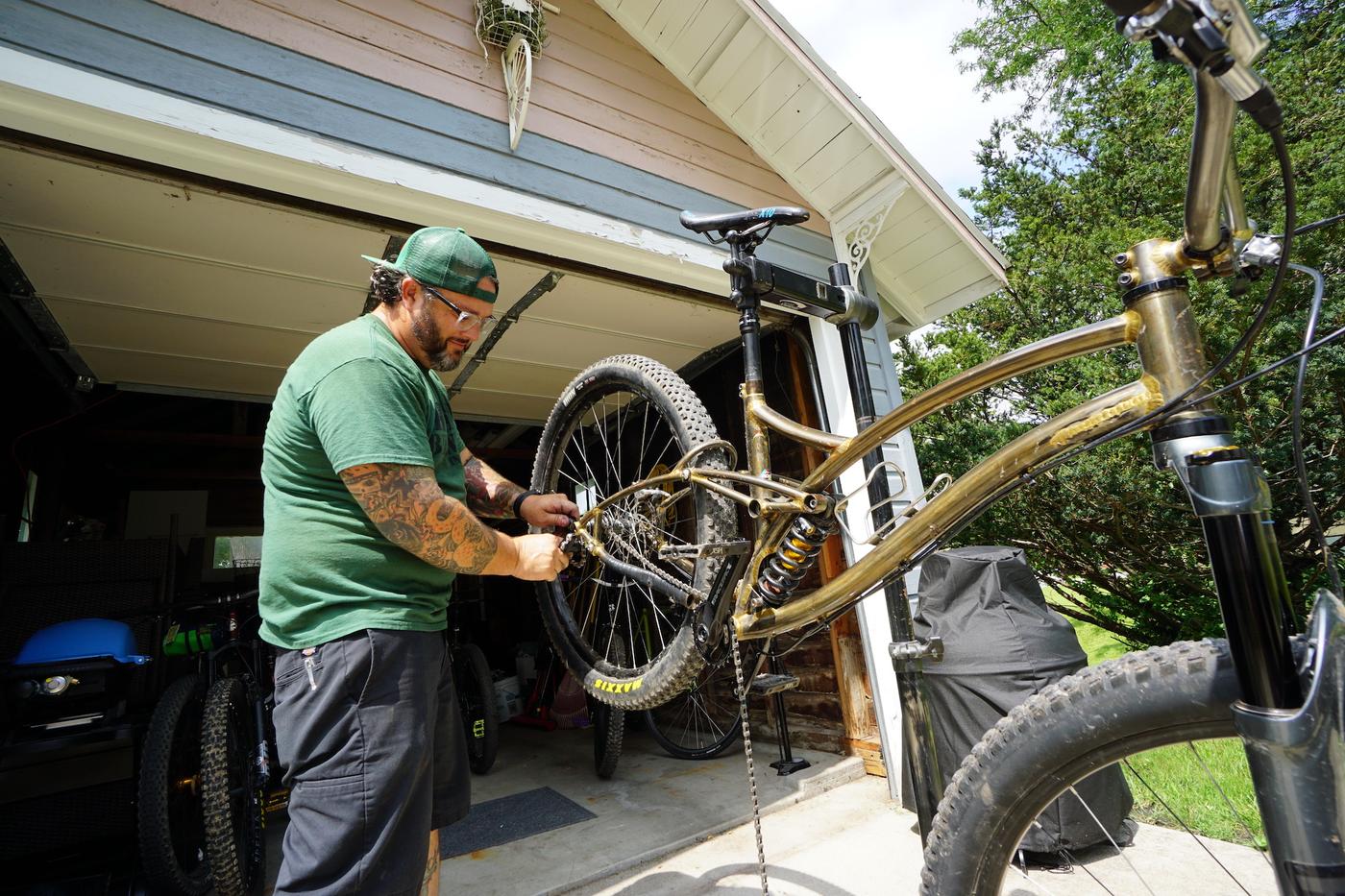 My arrival was met with a celebratory beer while I watched Adam dial in the double pulley chain tensioners. Because chain length grows on most full suspension bikes through their travel, a chain tensioner, like a derailleur for most, or a little derailleur-like spring set of pulleys keep chain tension when you don’t need to switch gears. If your brow is furrowed as you read this and are thinking why in the hell would you replace a derailleur with a derailleur-like thing that doesn’t shift, then you’re that much closer to understanding that lunacy is a big driving force at these events. 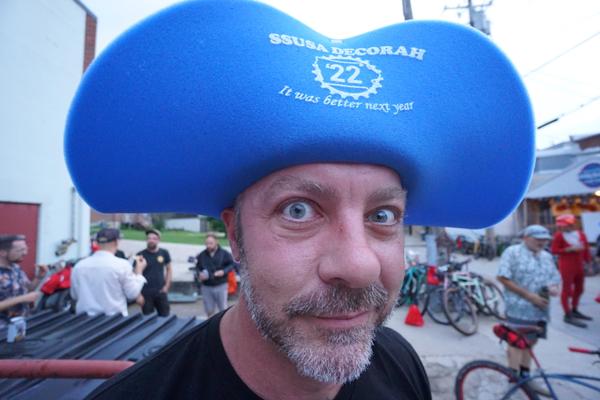 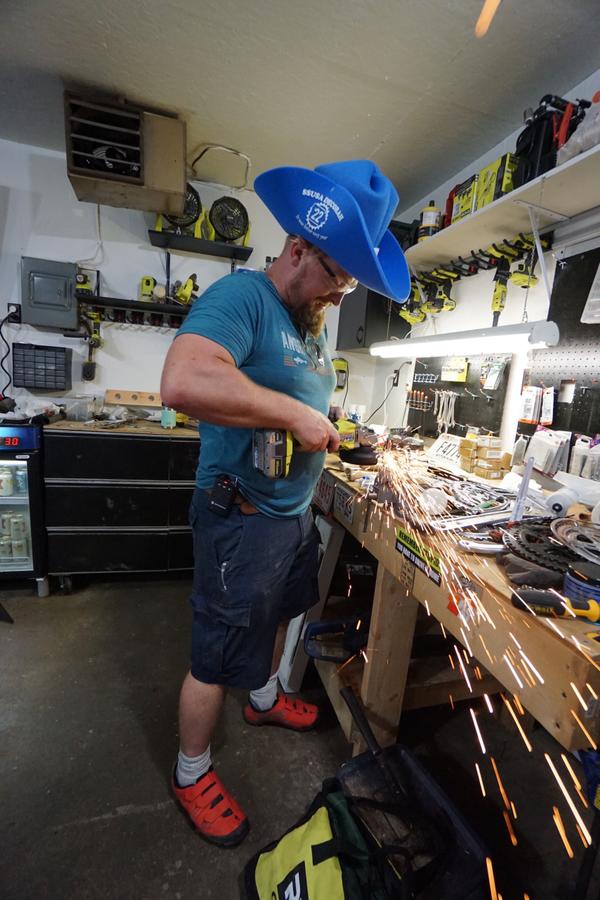 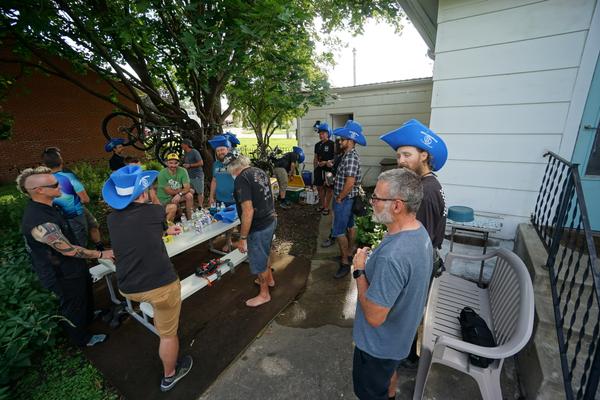 After Adam was properly supervised doing more bike work than anyone should expect to do under such a fraternal atmosphere, I wandered around town running a few errands. Eventually, I found myself kicking back at Chuey’s place with long-time chaos captain at these eventsÚ Scandinavian Jesus from Arizona. Scando Jesus, as I lovingly refer to him, had organized and financed the production of 150 oversized foam hats for the event to “just be at a bar with over 100 people wearing matching larger than average cowboy hats.” Chuey, who hails from an hour north in Minnesota and is another longtime SS event legend, has a little cottage in Decorah where we quickly fill the backyard with 30 or more foam hat wearing, single speed riding riffraff.

After the number of beers consumed exceeded the number that is advisable before operating power tools, we headed back to Spinner’s to do just that. Spinner and myself put the finishing touches (read: made from start to finish) the trophies for the winners. A few cut up chainrings, hammer handles, and some bar tape and… VOILA! Beautiful champions hardware was born. 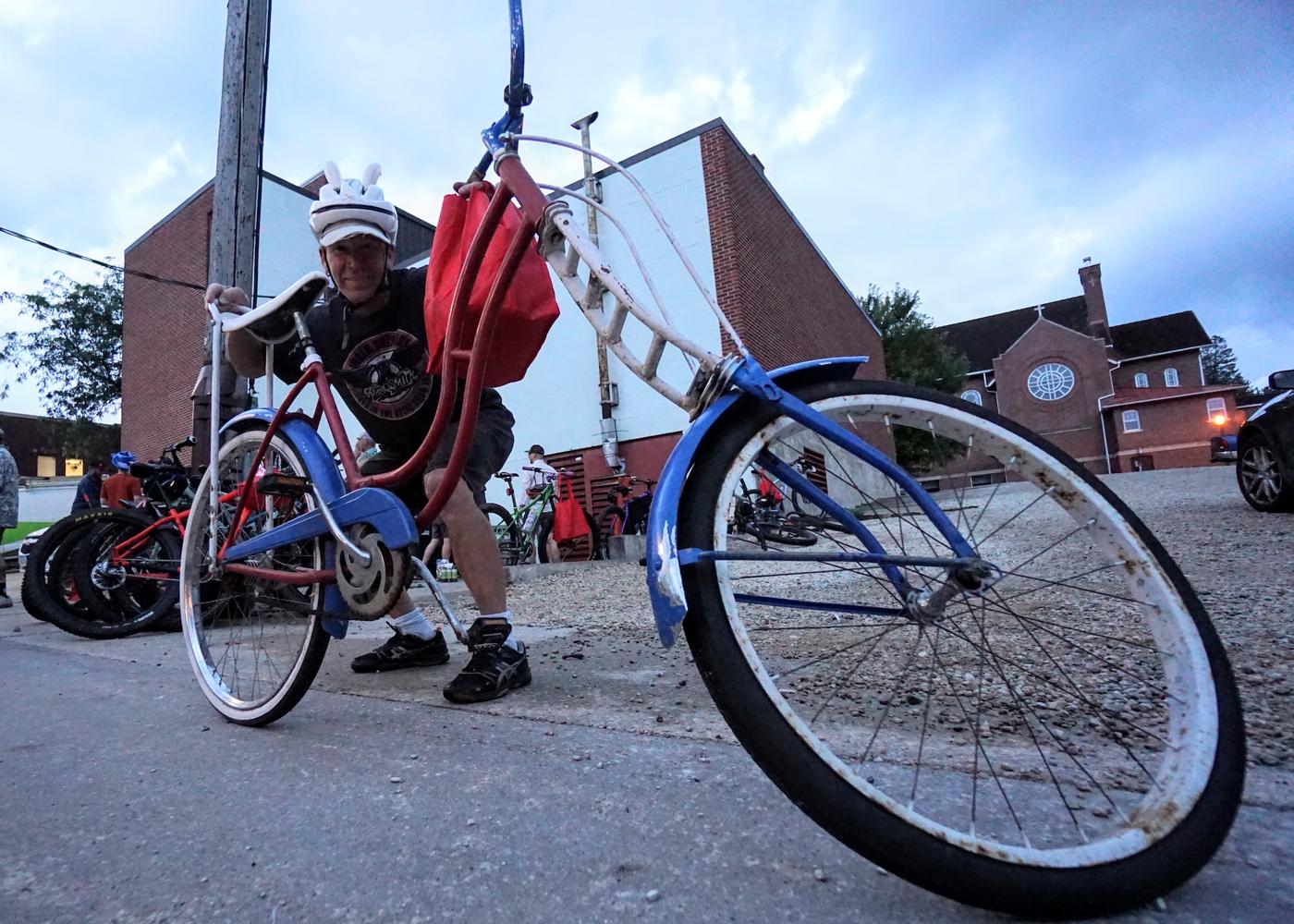 The foam hat scene blends into the bar scene where Scandinavian Jesus’ dreams are realized as most of the “athletes” from around the country congregate in their glorious blue foam cowboy hats. Kansas City was represented strongly with big names in the scene like White Mike, Bikeshop Beth, and Box Wine Dan to name a few. The Colorado contingent also showed up with their beautiful bikes from Front Range builders like Black Sheep, Oddity, REEB (that’s beer spelled backwards, for the kids) and the ever-elusive titanium Moonmen. Greater Iowa brings in some familiar single speed family which is only outdone by people from the Minneapolis scene. Come to think of it, the majority of the group was pretty “Minnesota Nice” overall.

A 10:00am rollout had all ~150 participants milling around the local Elks chapter building. Spinner donned his very nordic set of horns and addressed the crowd with a bullhorn. The critical mass style rollout was cool with all riders spreading out down Main Street, Spinner riding with a big American flag, followed by a huge parade of weirdos riding 1-speed bikes. 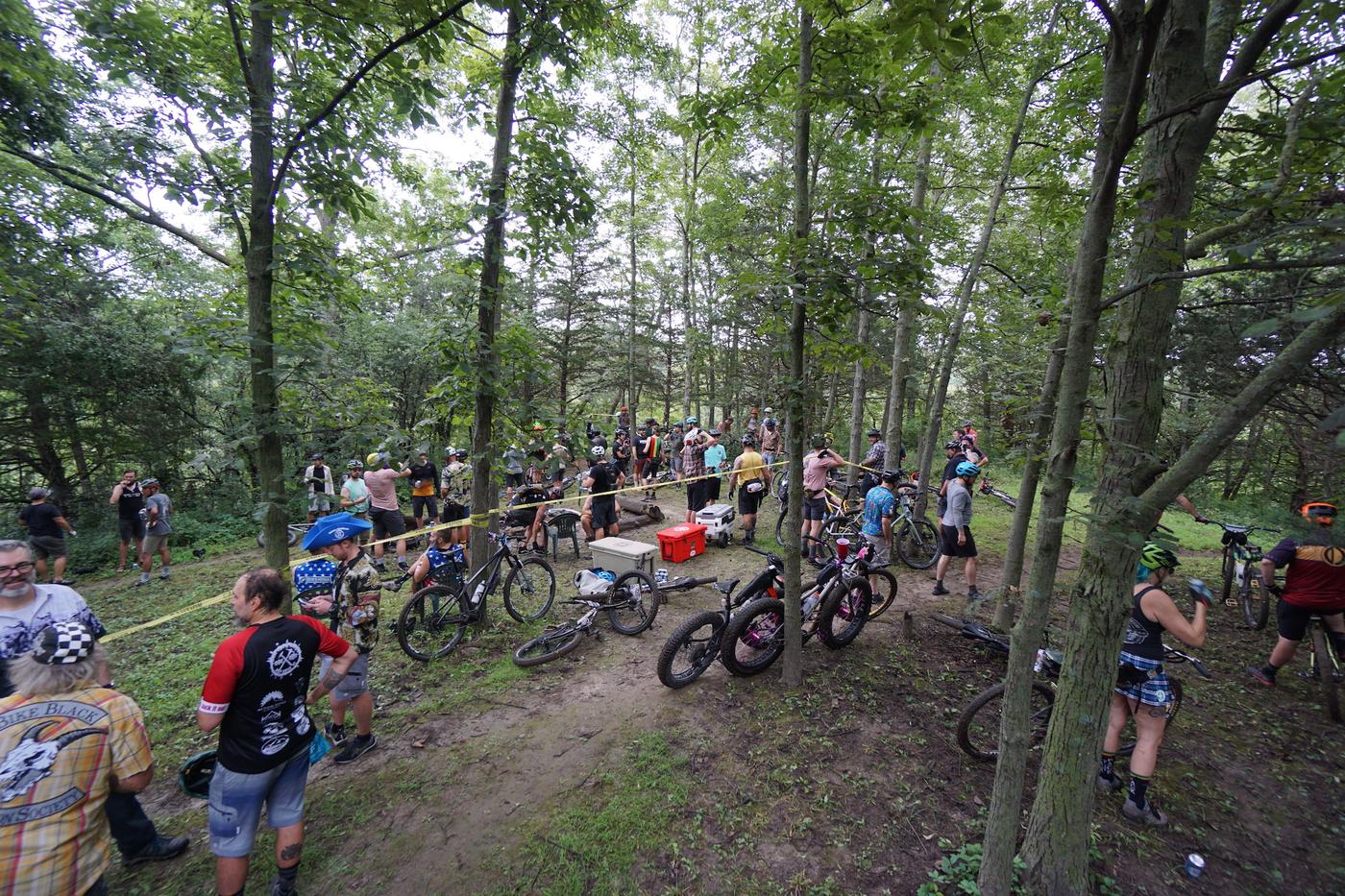 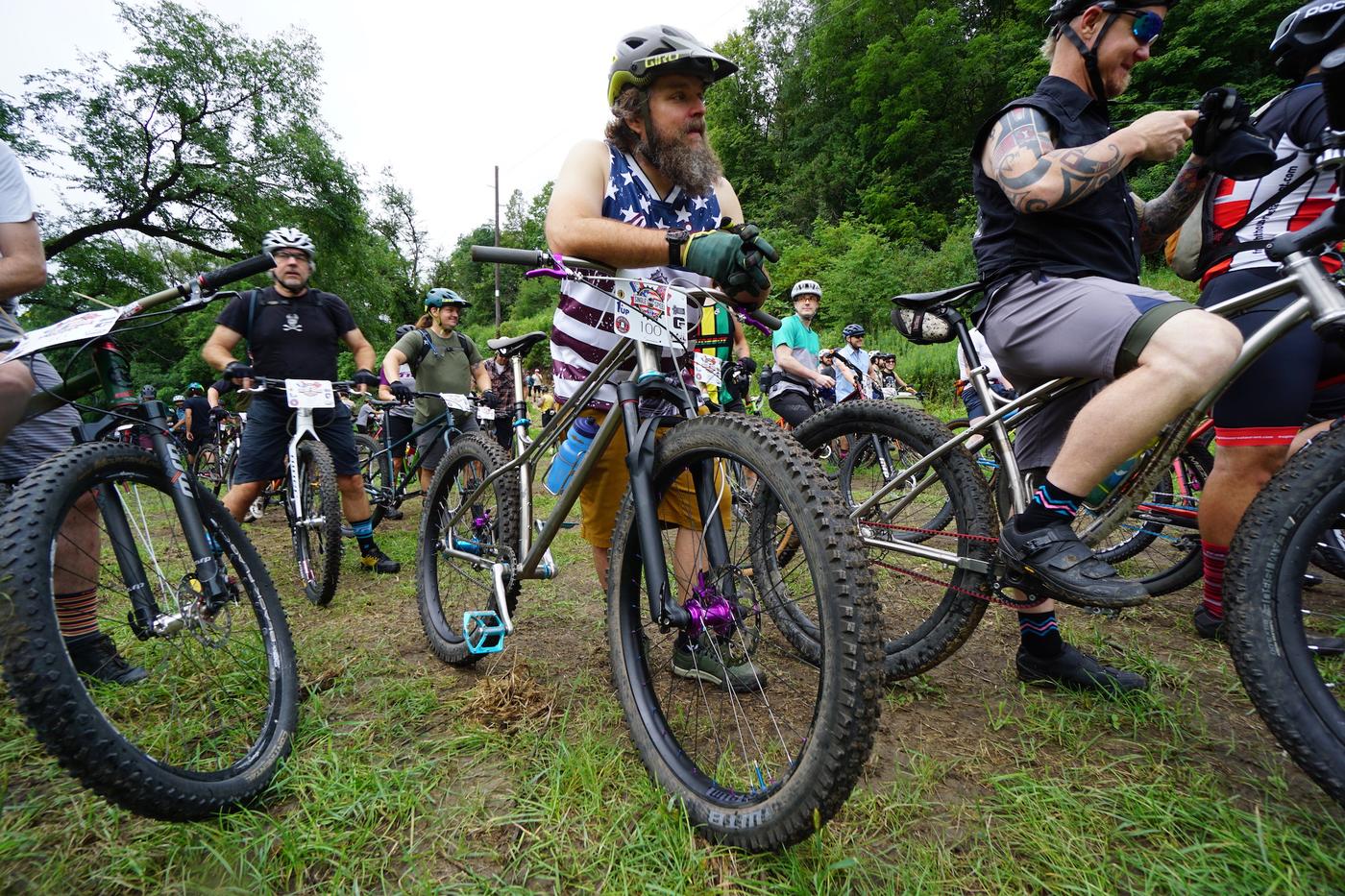 The clearing at the bottom of the trail system is where most people shared beers and psychedelics, or gospel scriptures, depending on who you were looking at. Spinner said some more things on the bullhorn and there was something like a race start, where the quicker among us shot off the front with most others filing in behind. I noticed Box Wine Dan didn’t even bother mounting his 1990 Rockhopper, complete with a rack supporting his favorite Franzia rosé. He instead opted to walk the first portion of the course and converse with passersby. He eventually got to share his three-liter bounty with all his new friends on the footdown derby track at the end. 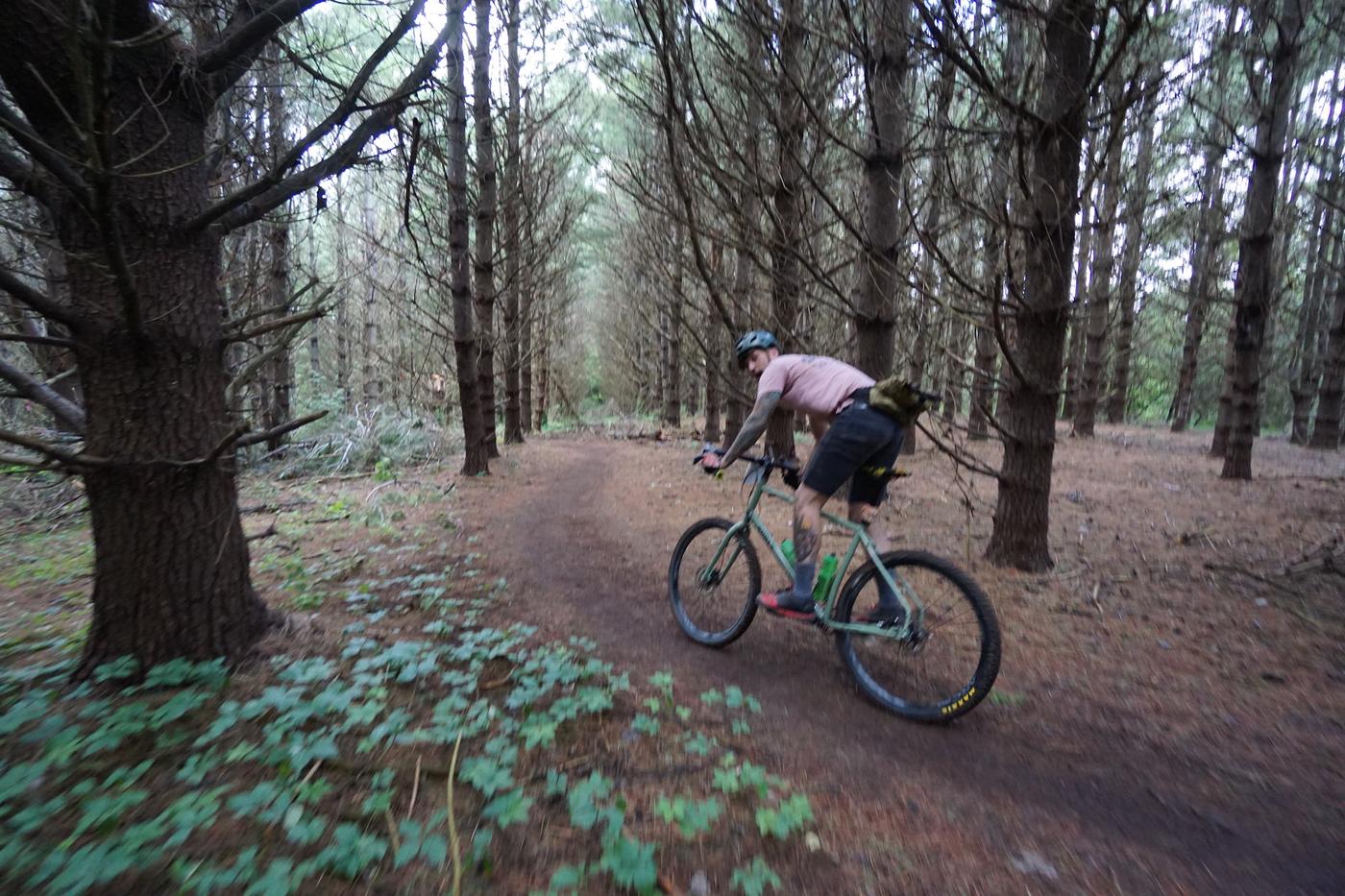 I pedaled early on with Arizona regulars like Candy and Jolly from Tempe. Core-est of the core when it comes to single speed family. We traded off between pedaling and walking frequently on the greasy steep grades of the Driftless zone around Decorah. It was a beautiful mixed forest with huge stands of cottonwoods intermingled with pine trees. The local turf was just about everything you’d want in mountain bike trails: well-designed with low grades and long lines-of-sight made high speeds feel even higher as many of us were twisting wide riser bars through impossibly skinny tree gaps. From time to time, the trails felt a tiny bit meandering, but the heavy cover let through only the whoops and shrieks of fellow single speeding idiots twisting about in the woods. 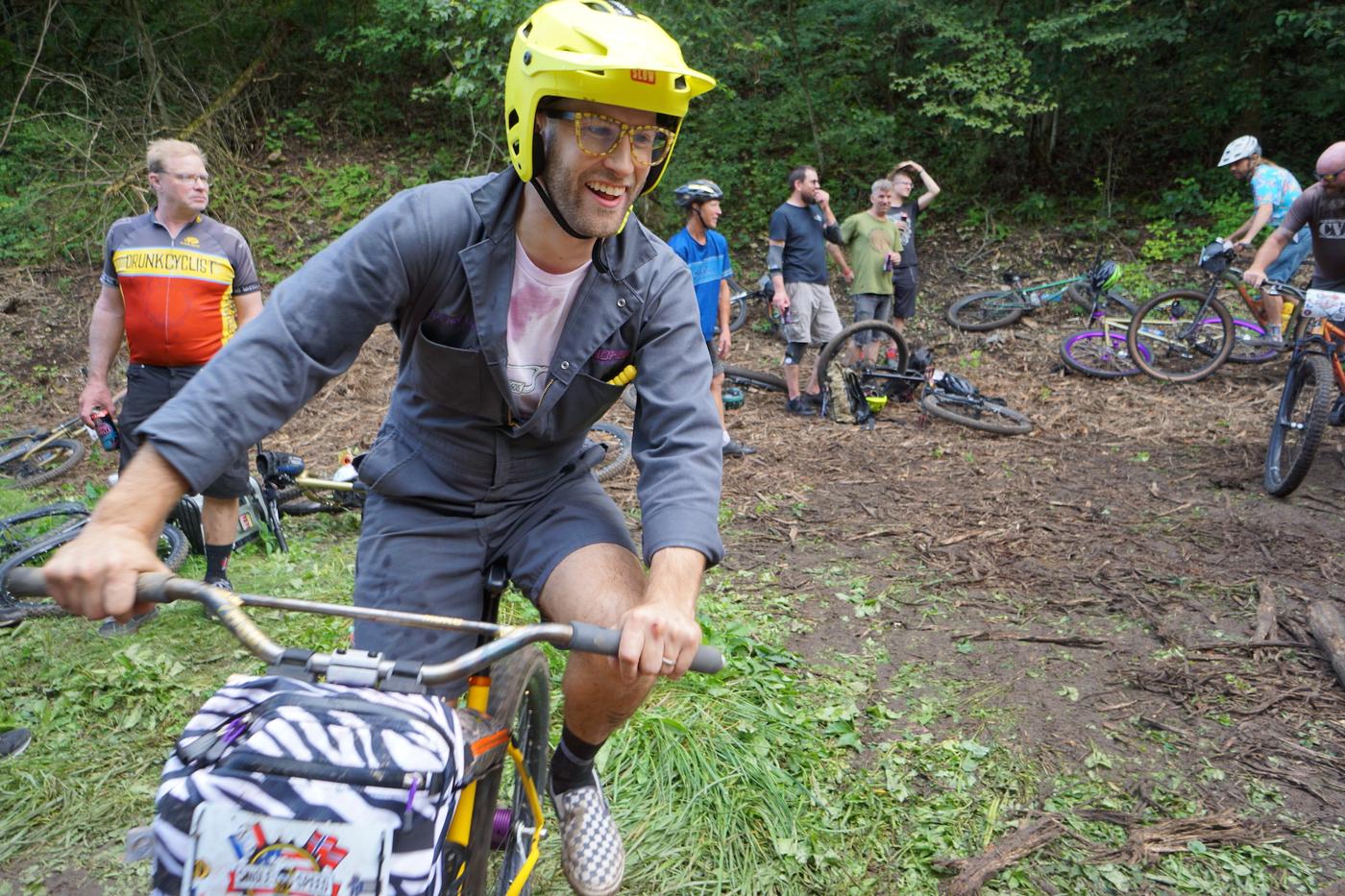 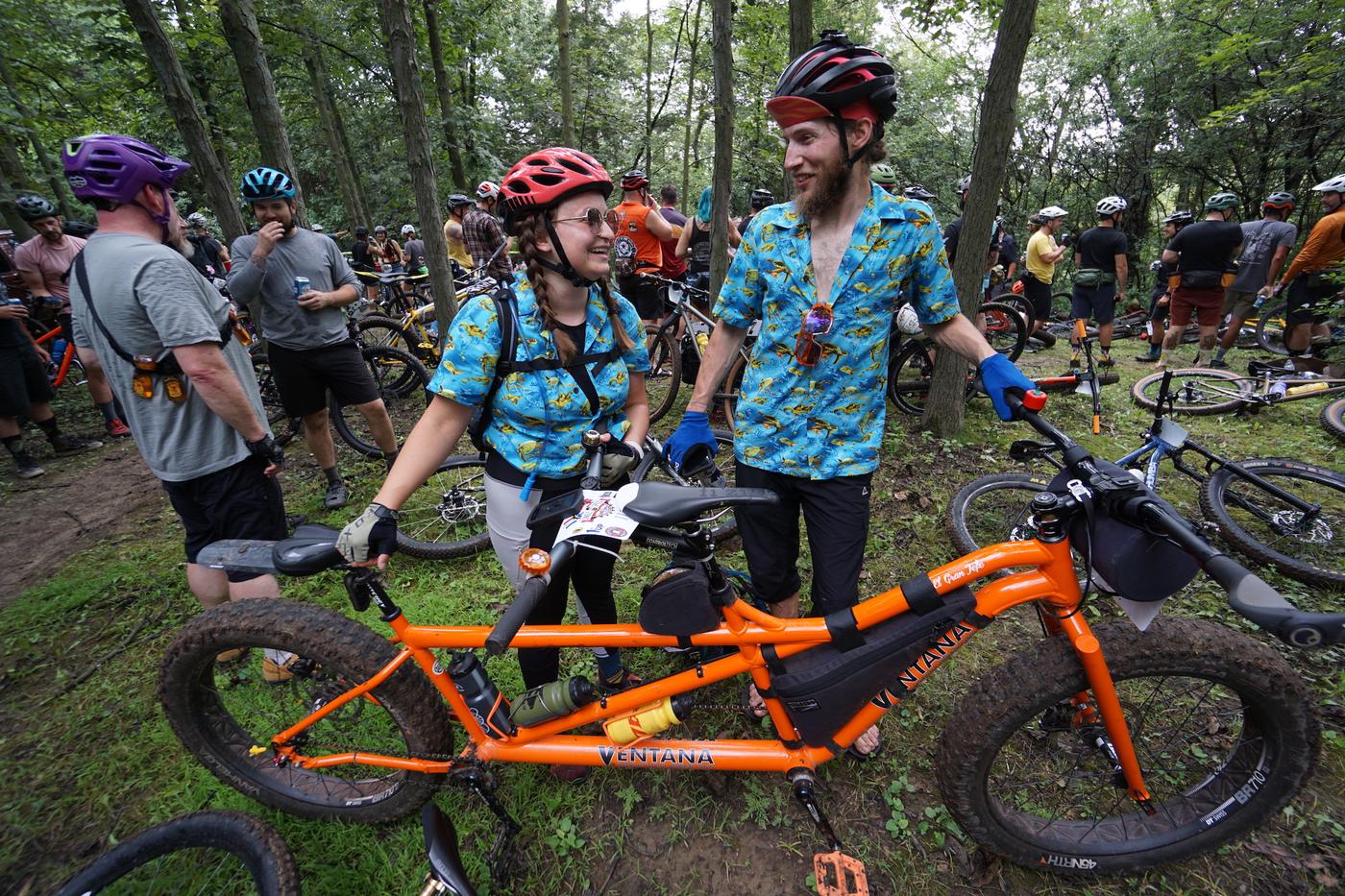 A gathering point where 900 Busch Lites and La Croix (both local the to area come to think of it) filled comically large coolers appeared in the middle of the forest. Sal, from the old guard at Surly, played the banjo and entertained riders while a few from Maine failed to make a fire out of the moist combustables on hand. I got to kick it with the Bad Bitch Brigade and we compared bike tattoos —Jules’ “holy cromoly” was only bested by Jenny’s drunken stick and poke of a Fox 34 that Jules gave her. Is it even worth mentioning that they were on rigid steel single speeds? They were probably designed by Jenny herself, an engineer formerly at All City, now at Salsa (basically the same place, according to everyone who doesn’t work there). 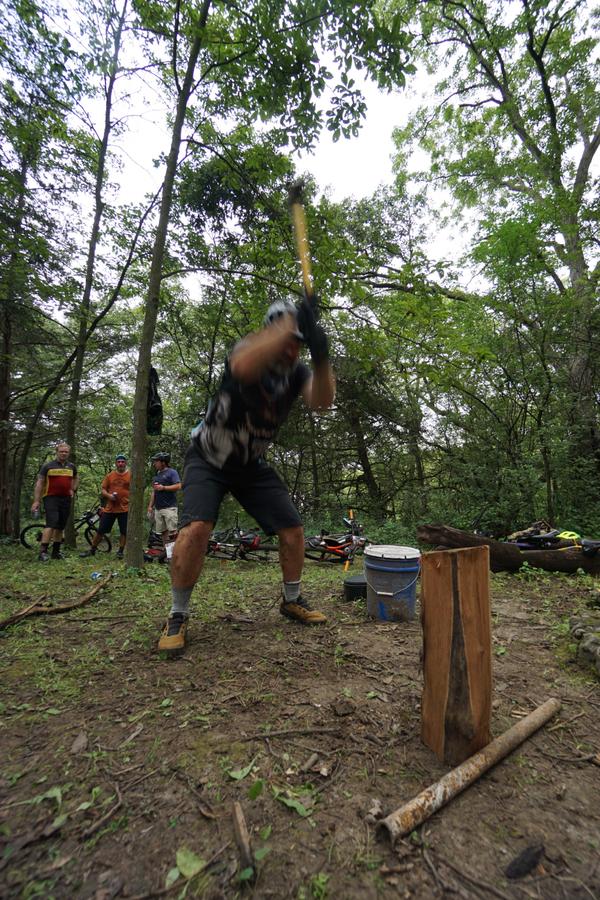 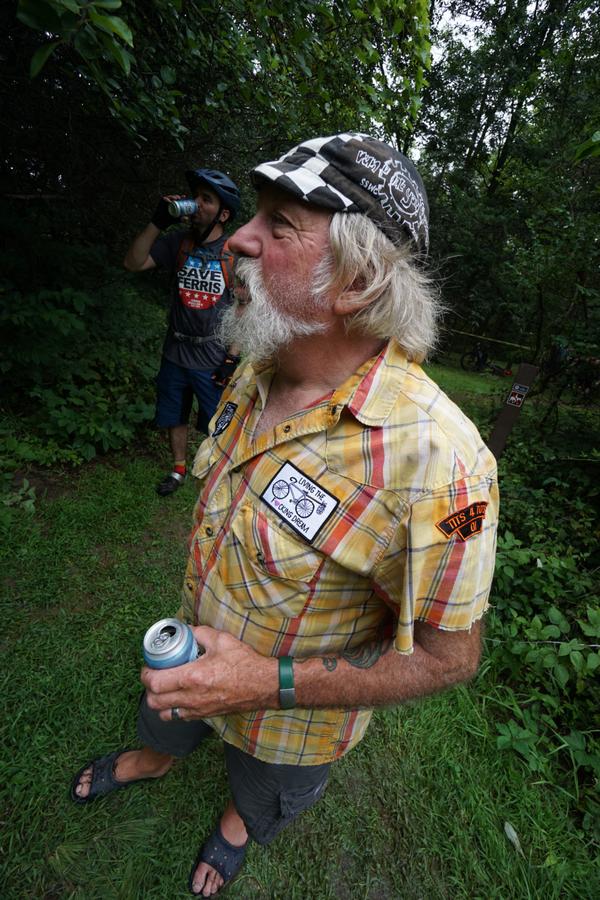 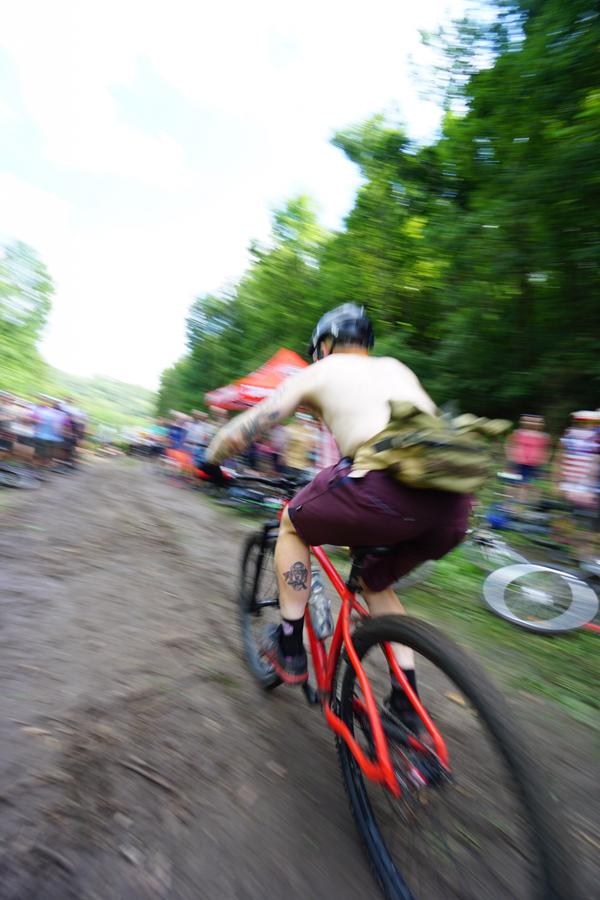 This party was optimal as the course looped back to it two more times. Bonfire still not going after every loop. Light lagers and La Croix in lieu of any actual nourishment. I rode most of the course with Karl, my finish guy from Phoenix, and White Mike from KC. Mike jinxed the fuck out of himself by recalling a story of our buddy Corbin losing his crank arm in the middle of a big White Rim tour in Utah…and wouldn’t you know it, Mike’s cranks on his new custom built Ghost Grappler did the same darn thing. Karl had his hands full even with solidily fastened cranks, piloting his fly-ass custom Rusty Trucker (as seen here) coaster-only in the tight trees. 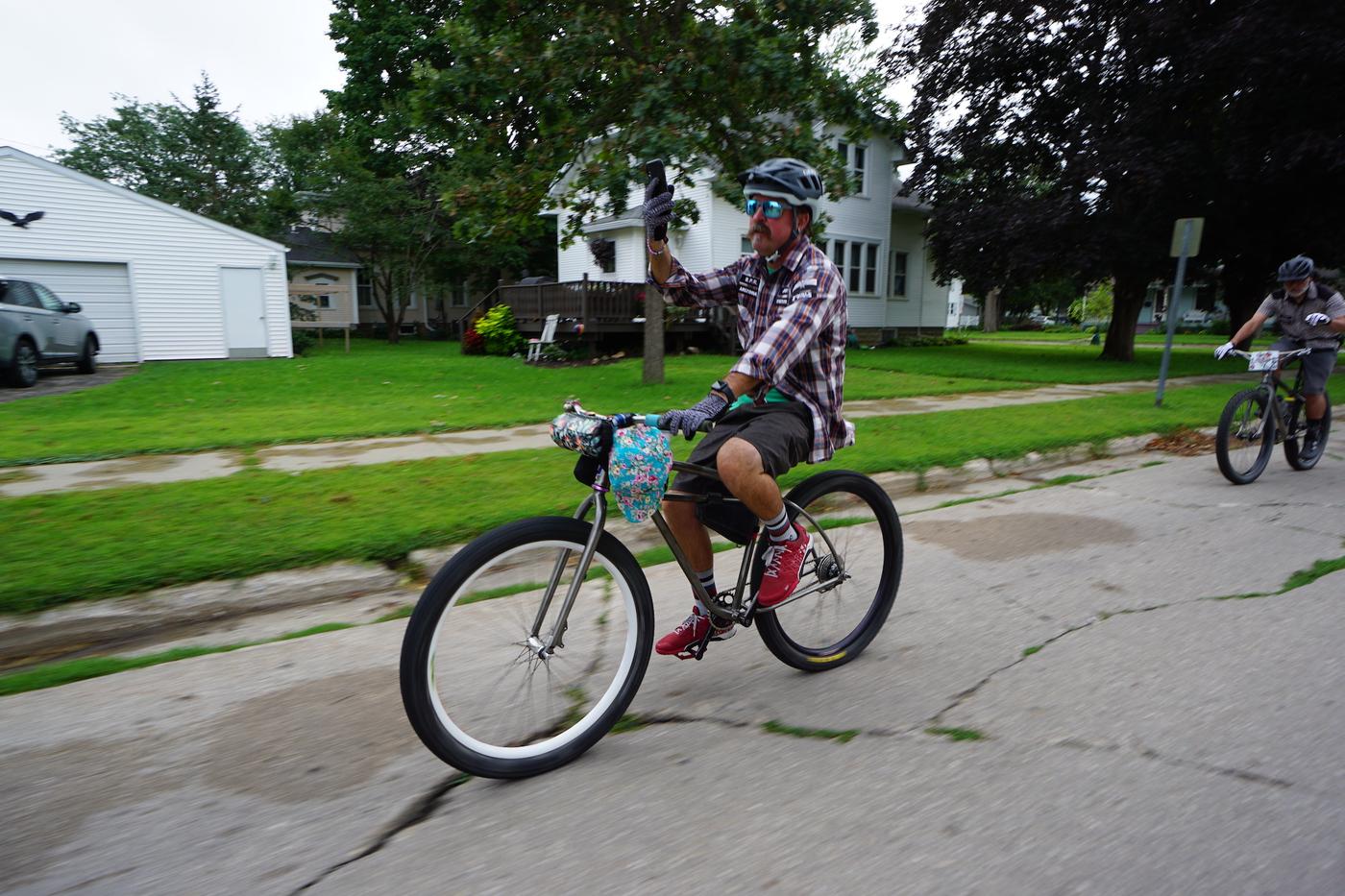 Let’s talk coasters for a second. Probably 10-15 folks represented the coaster brake lifestyle at the event. Aside from Karl and James Rooke (the Rusty Trucker himself), Tyler from Proper Engineering in KC was sporting one of his fresh Peru built coaster-only builds. Tyler leaves nothing on the table when it comes to these weekends. Little power naps between shots of whiskey seems like it works for him. Jason from Iowa was on a pre-war rig that, to my naive eye, probably weighed in the mid to high 40lb range. It was a very pretty coaster-only bike that had all the right patina and choice hand-selected build. 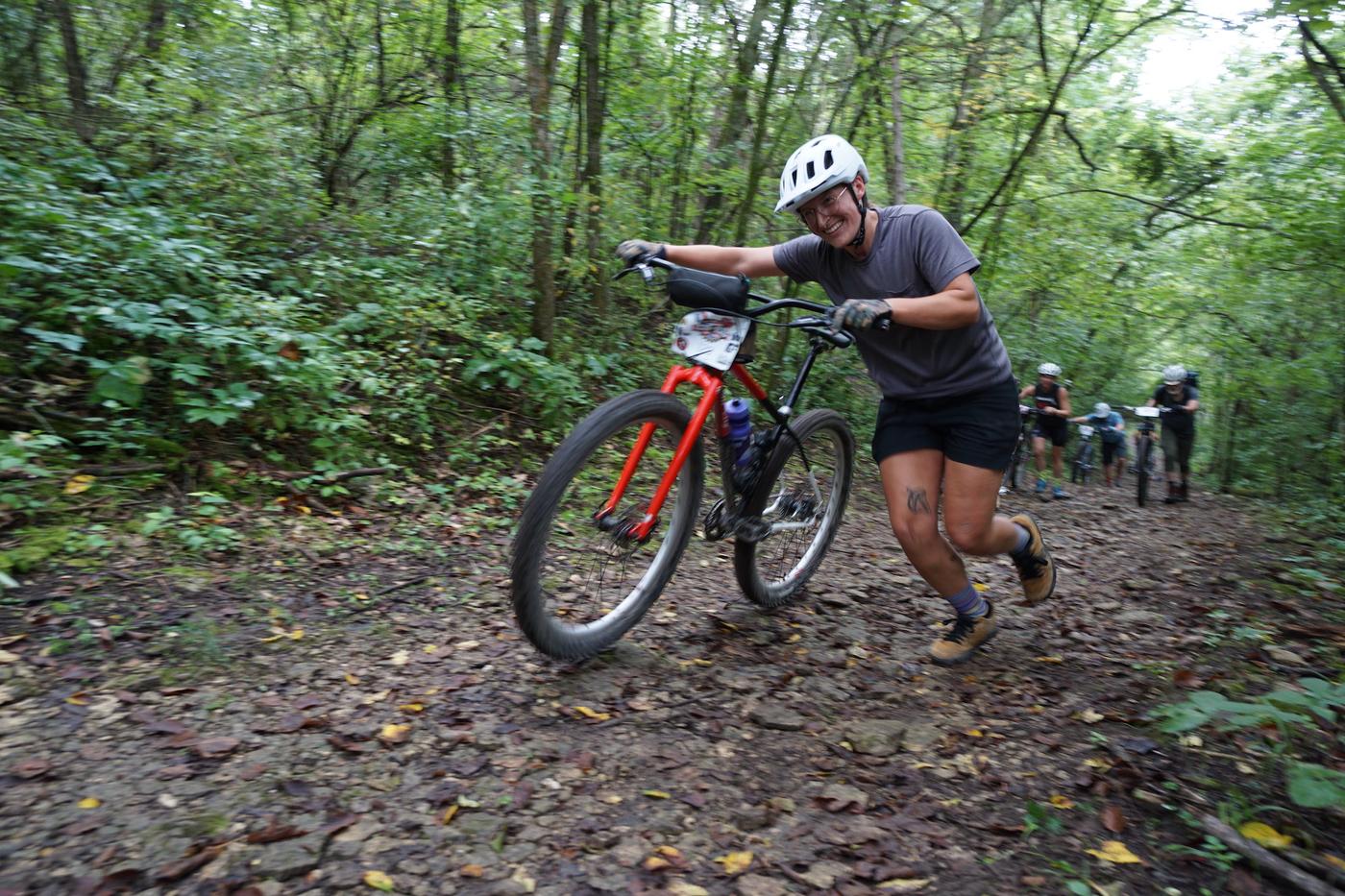 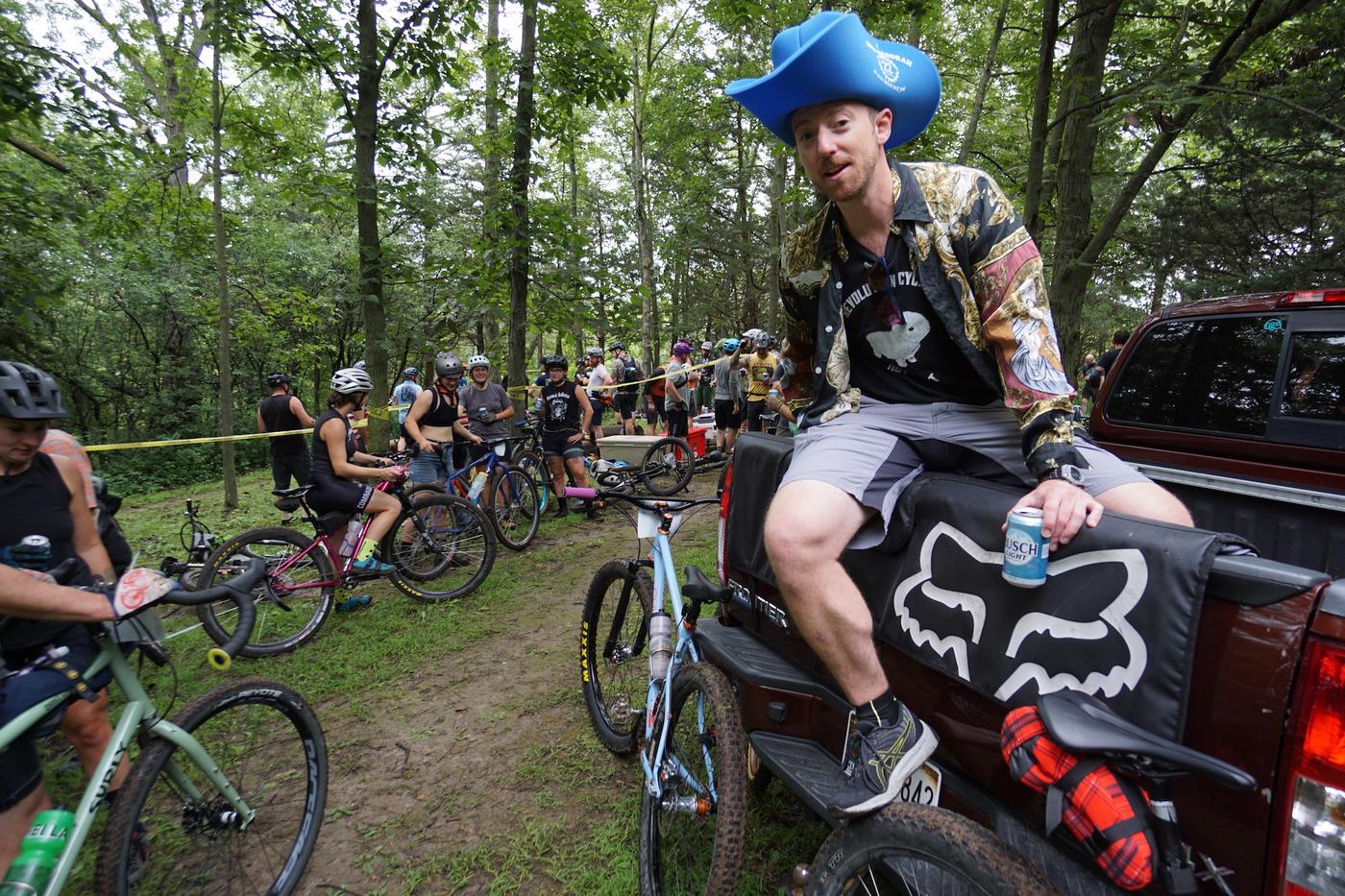 The end of the racing culminated in feats and skids of strength followed by a derby around a couple popup tents and some box wine handups. Tyler took a nap. General revelry ensued. 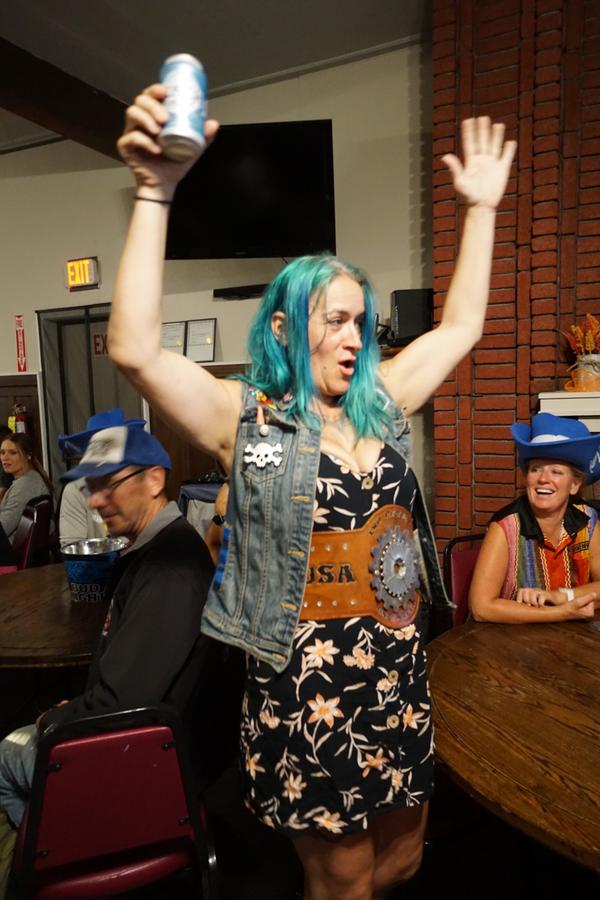 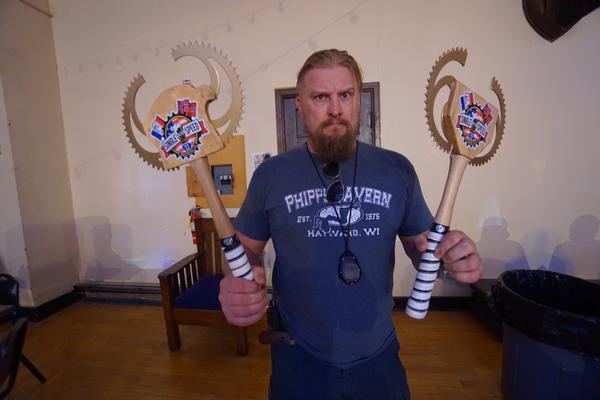 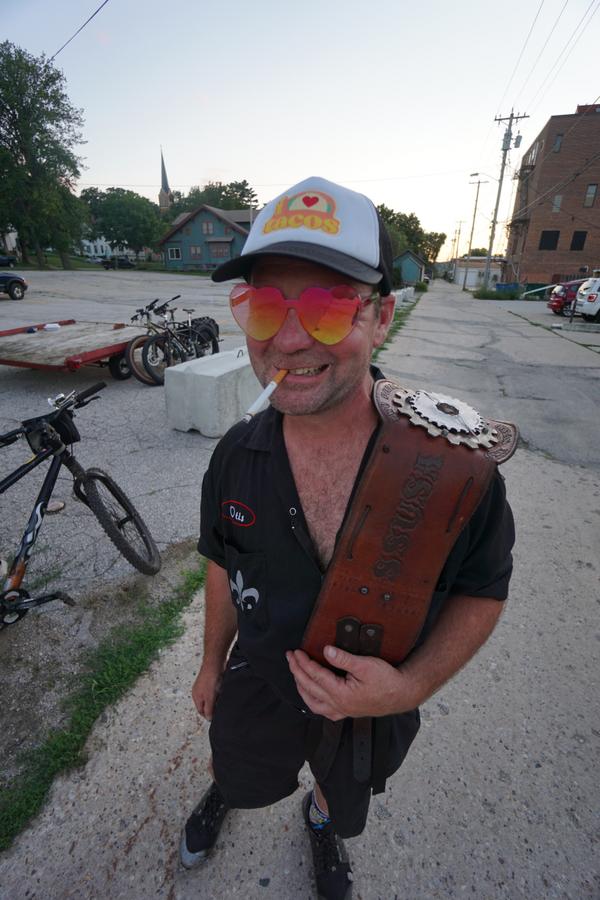 That night the DFL’s (Dad’s Late Night Friends to some who know them better than by their loose acronym) played at the Elks Club. KC won a drawing competition for next year’s bid which, if history tells us anything about their ability to throw a party, shouldn’t be missed. Candy from Arizona and Odis from Iowa won the belts in a few games of footdown outside the Elks. 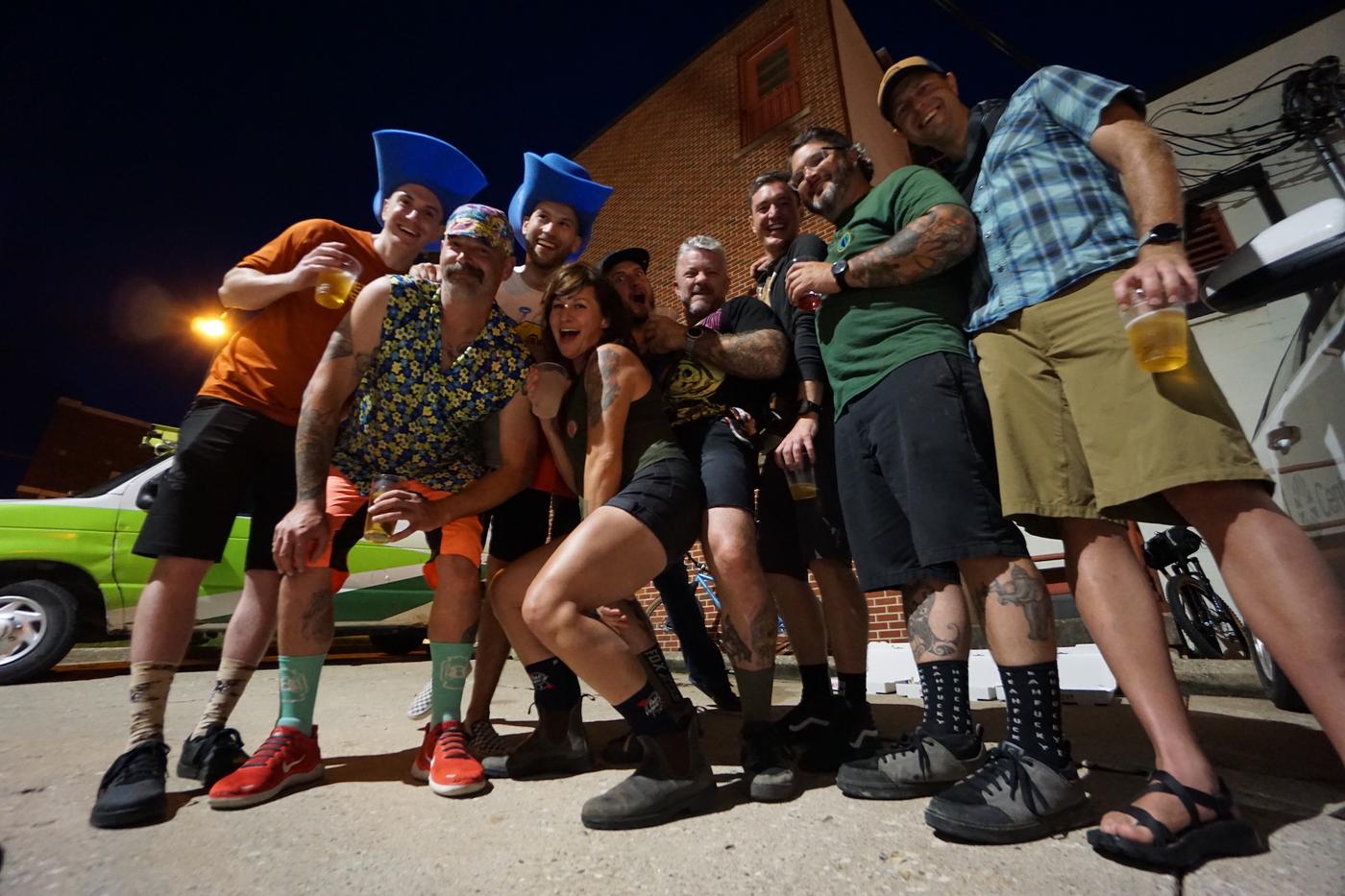 Is single speed mountain biking all about drinking too much and being loud and obnoxious? Maybe a little. But its defined more through seeing of old friends that still ride the same stupid bikes as you do. And that stupidity is the glue that keeps these events going. It’s the anti, the counter, the middle finger of mountain biking and it feels good to be a part of it. It’s unpretentious. “Winning” means something different to almost anyone you ask. I don’t think it’s the raucousness or the drinking that brings everyone back year after year, I think it’s riding 1-speed mountain bikes with friends in the woods, just like we used to when we were kids. 2022 SSUSA Iowa had all the ingredients this year. One heck of a get-together with all the great characters and bikes. Can’t wait til KC 2023.