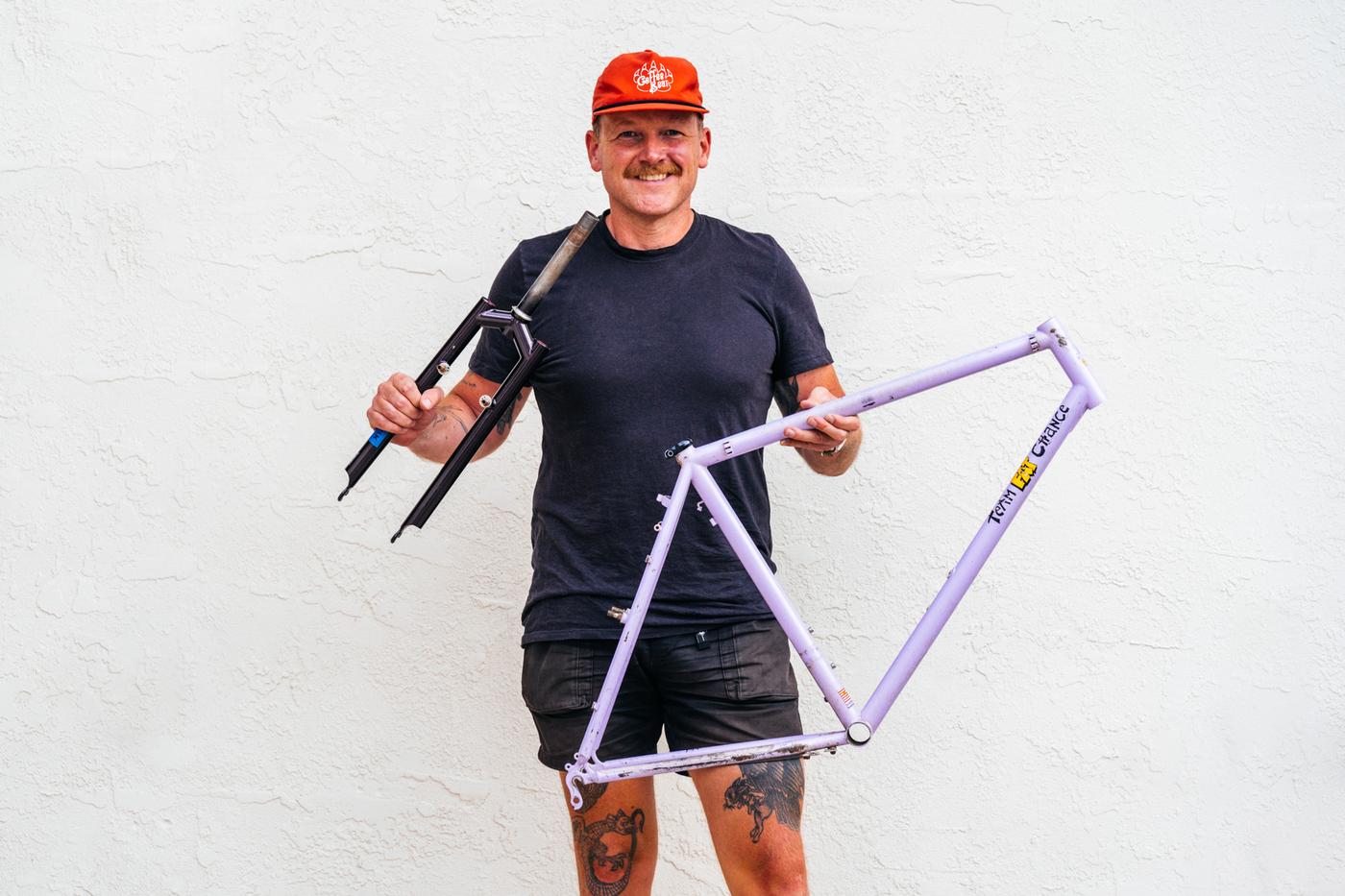 Vintage bikes have always had a home on The Radavist. From shooting Sky’s wonderful collection from Velo Cult, to showcasing stunners in Los Angeles, and basket bike/resto mod conversions in Austin, there’s something about these 26″ wheeled, friction shifting, hand-made beauts that have always caught my eye. Over the past year, there’s been an uptick in the number of vintage bikes we’ve showcased, in part because joining with The Pro’s Closet gave us access to TPC’s Museum bikes, a veritable treasure trove of exciting and influential builds to unpack. Each bike is an earmark in cycling history, each with its unique story to tell. Additionally, I have had the time and resources to work on such restoration projects for the first time in years.

This year, we’ve featured my 1982 Ritchey Tam and my 1984 Mountain Goat, representing what I love about the early 1980s mountain bike design. With flat top tubes, big tire clearance, friction shifting, and geometries still relevant today, the 1980s bikes were more geared toward exploration than the racing geometries the NORBA era brought about. I couldn’t buy one of these classics when I first started riding in the 90s (my first bike was a rigid Gary Fisher Tassajara), but I could always count of Mountain Bike Action and my local bike shop to keep the eye candy in steady supply. Since then, one elusive bike model has remained the apple of my eye: an early 90s Yo Eddy! When Mike Wilk wrote about TPC’s Grello Yo!, it made me nostalgic tailspin.

I casually reached out to Martin at Second Spin Cycles, who had just bought a big Fat Chance collection from out West. I asked if he had a Yo Eddy that would fit me and, as luck would have it, he did. But it needed some work… 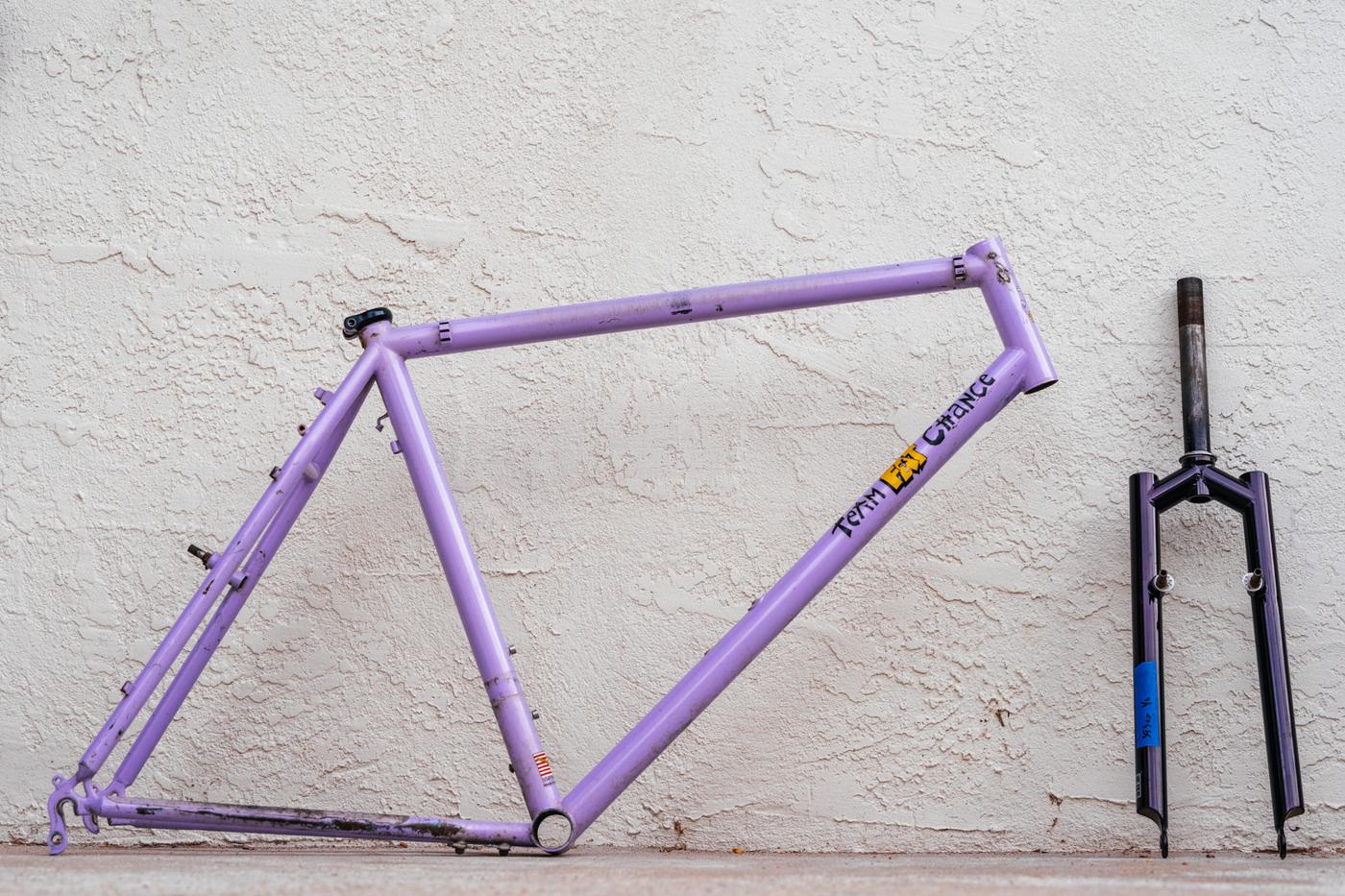 Disclaimer: I’m no historian. My anecdotal experience with vintage mountain bikes is a far cry from the expertise that guys like Martin, Tasshi, and Mike Wilk can offer through their writing, documentation, and knowledge. I’m honored to have these raconteurs sharing the knowledge gained from decades of collecting vintage bikes here on The Radavist! If you’re looking for a rundown on Chris Chance, Fat City, and the Yo Eddy, please read Mike’s penned piece on the Grello. 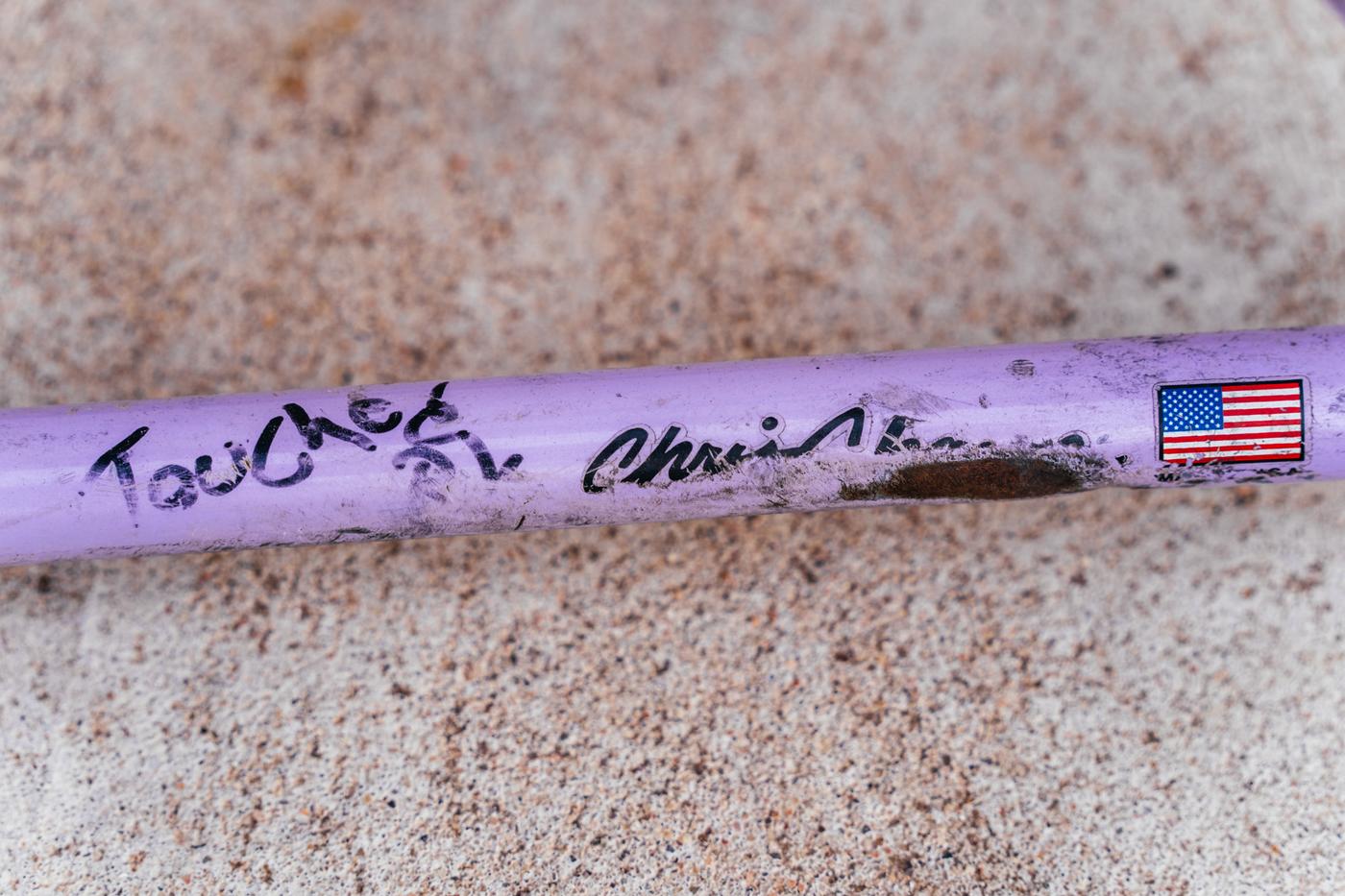 Square One: The Frame

Guys like Martin at Second Spin spend countless hours finding, restoring, and building up classic bikes. The bread and butter of this hobby/side hustle is being paid by clients to deliver a restored bike straight out of a catalog. From the spoke nipples to the chain and brake pads, Martin’s builds are period-correct, catalog spec dream bikes. Due to the difficulty of sourcing and the more lucrative nature of creating era-replicas, he rarely sells frames or components outside of a build.

By happenstance, I reached out to Martin at a time when he had an abundance of frames with very little time to spend on each one individually. Since I already had a lot of parts and knowledge and respect for this particular frameset, Martin decided to sell me the frame. A price was negotiated, the frame was shipped and it arrived… in pretty rough shape.

There are two options when you encounter a frame like this: ride it with the patina as shown or get it resprayed by a painter. I’m opting for a fresh coat.

So why would I embrace the patina on my Mountain Goat but want a new paint job on the Yo Eddy? 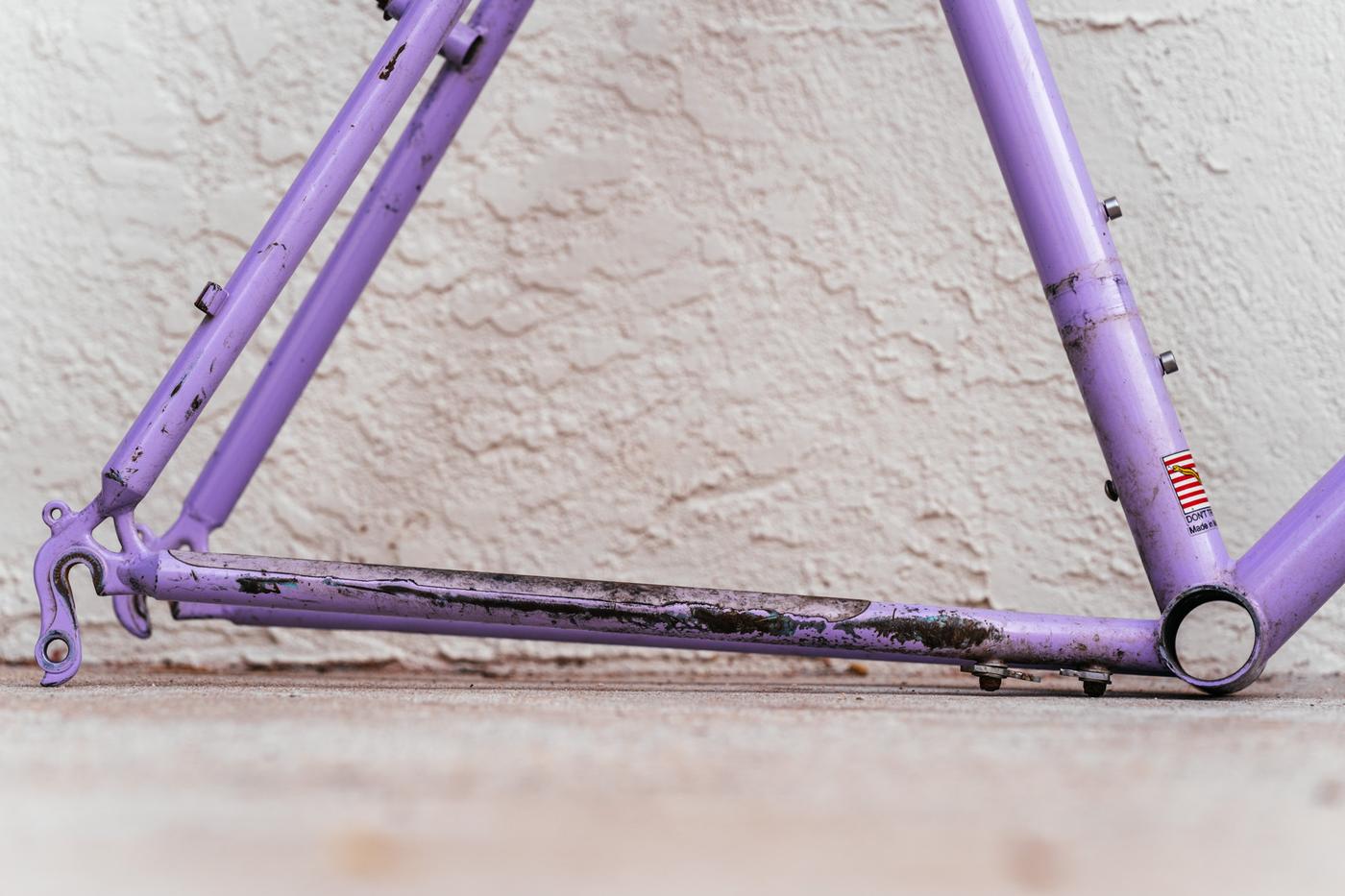 Everyone loves beasuage, or beauty through usage, but when you want to keep a bike rolling for another thirty years sometimes a respray is in order, as paint acts as a protective buffer for the frame and prevents rust. And, for this frame in particular, I won’t be using the original fork and painting will allow me to easily color match the two. When Martin received the batch of Yo Eddy frames that mine was part of, he also got a huge pile of Chris Igleheart-built segmented forks. 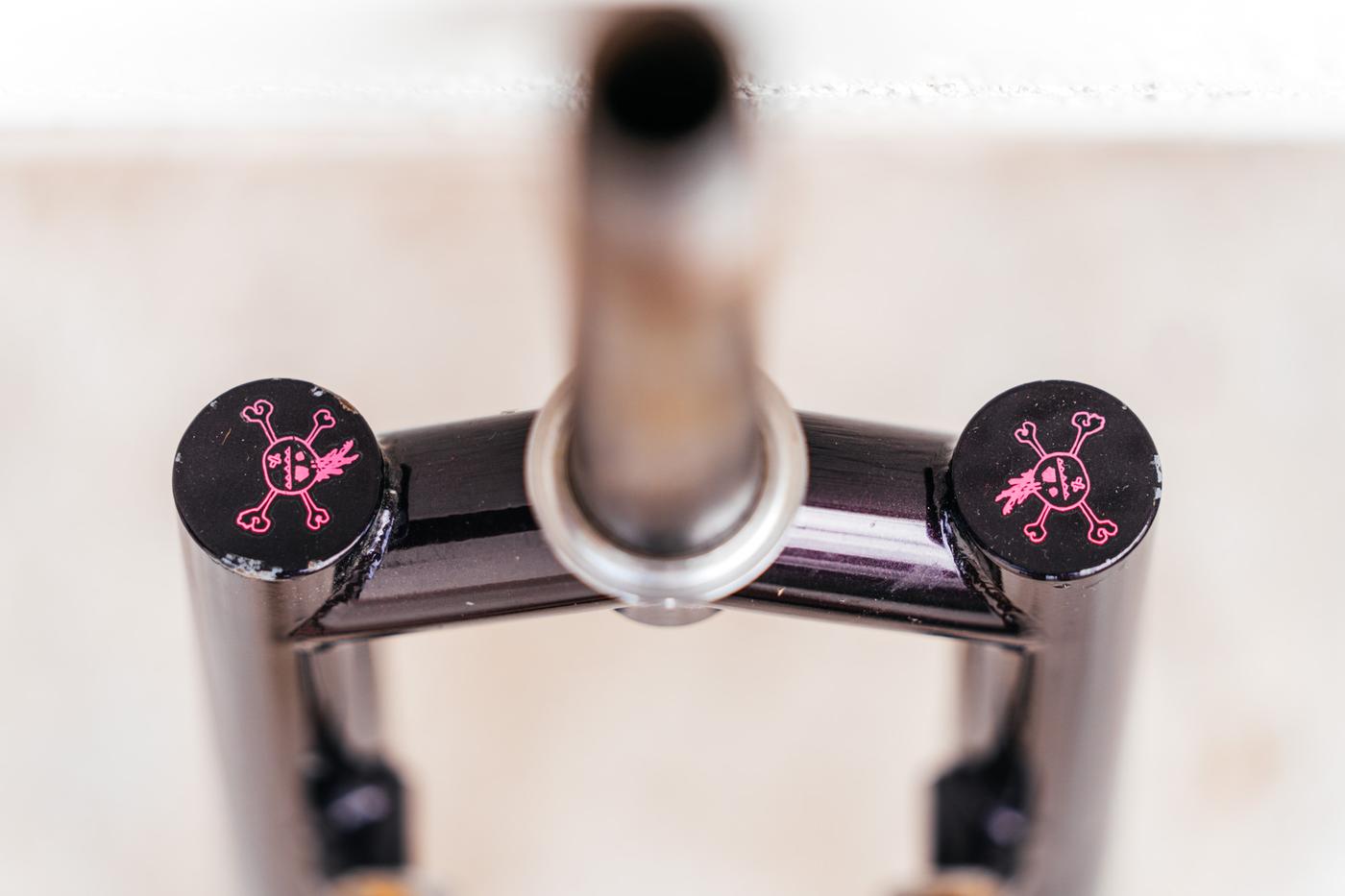 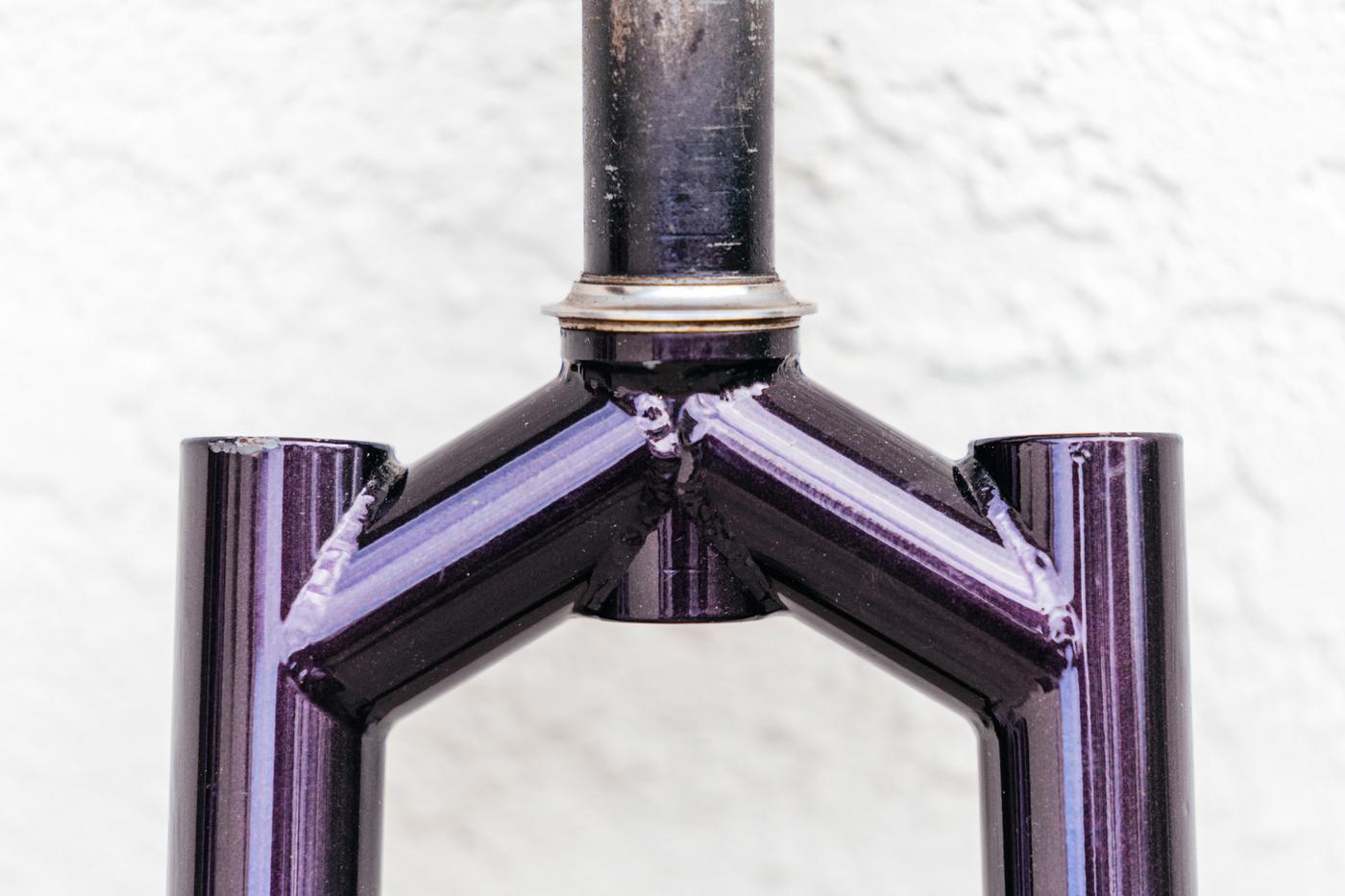 The frame itself is a 1990 but the fork is most likely from 1994. Still, this was the only fork I could find that would fit the head tube of the bike and still have enough stack for a 1″ threaded headset like the Chris King Gripnut I’ll be installing. 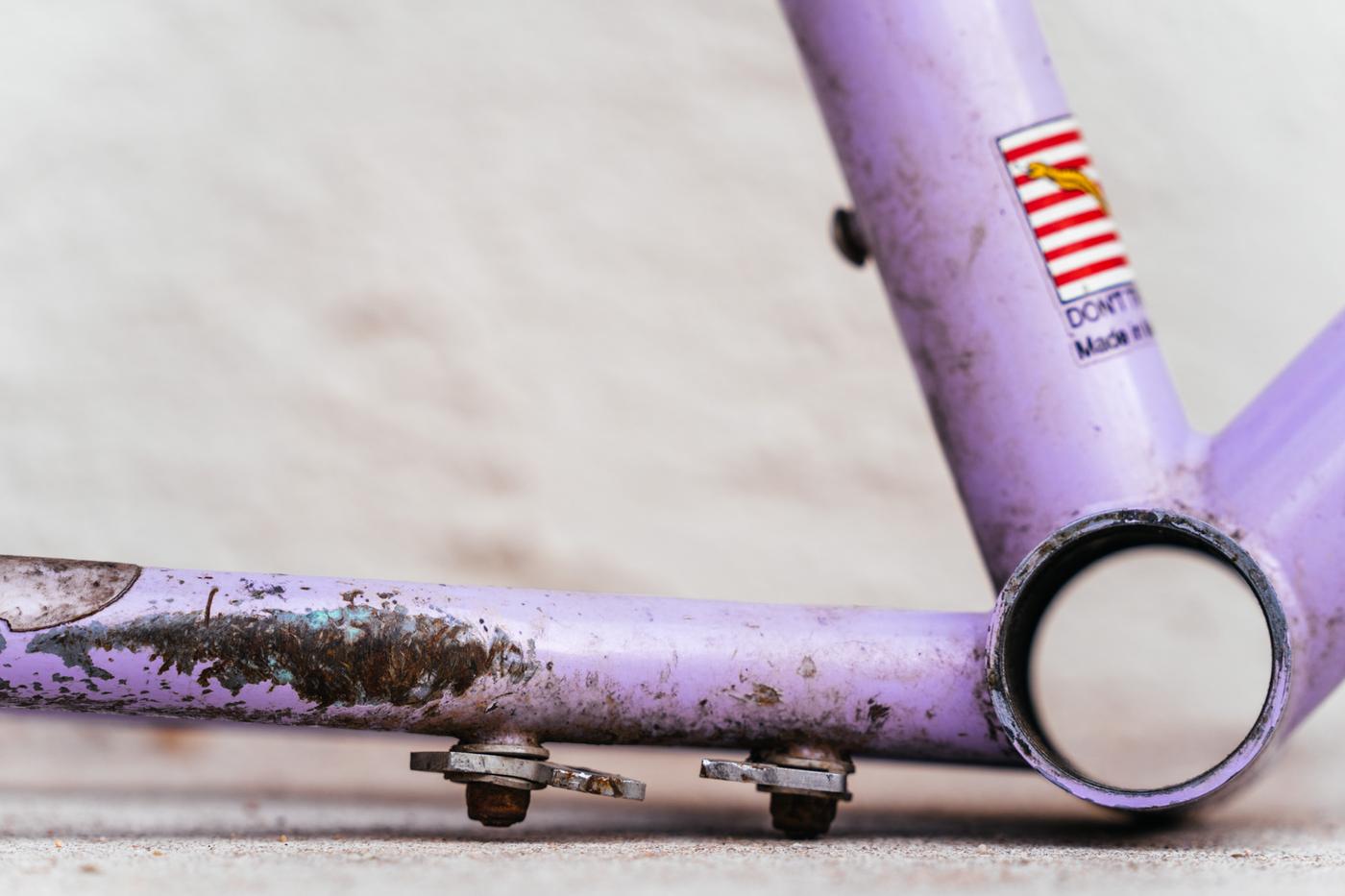 From what Martin and I can tell, this 1990 frame was sent back to Fat City Cycles for some updates. In 1994, Fat came out with the “ToothPick” design, an anti-chain suck device, brazed into the underside of the chainstays. This 1990 has those 1994 ToothPicks, and it’s also equipped with a full touring package. (Believe it or not, people have been touring on mountain bikes long before the term “bikepacking” came out!) 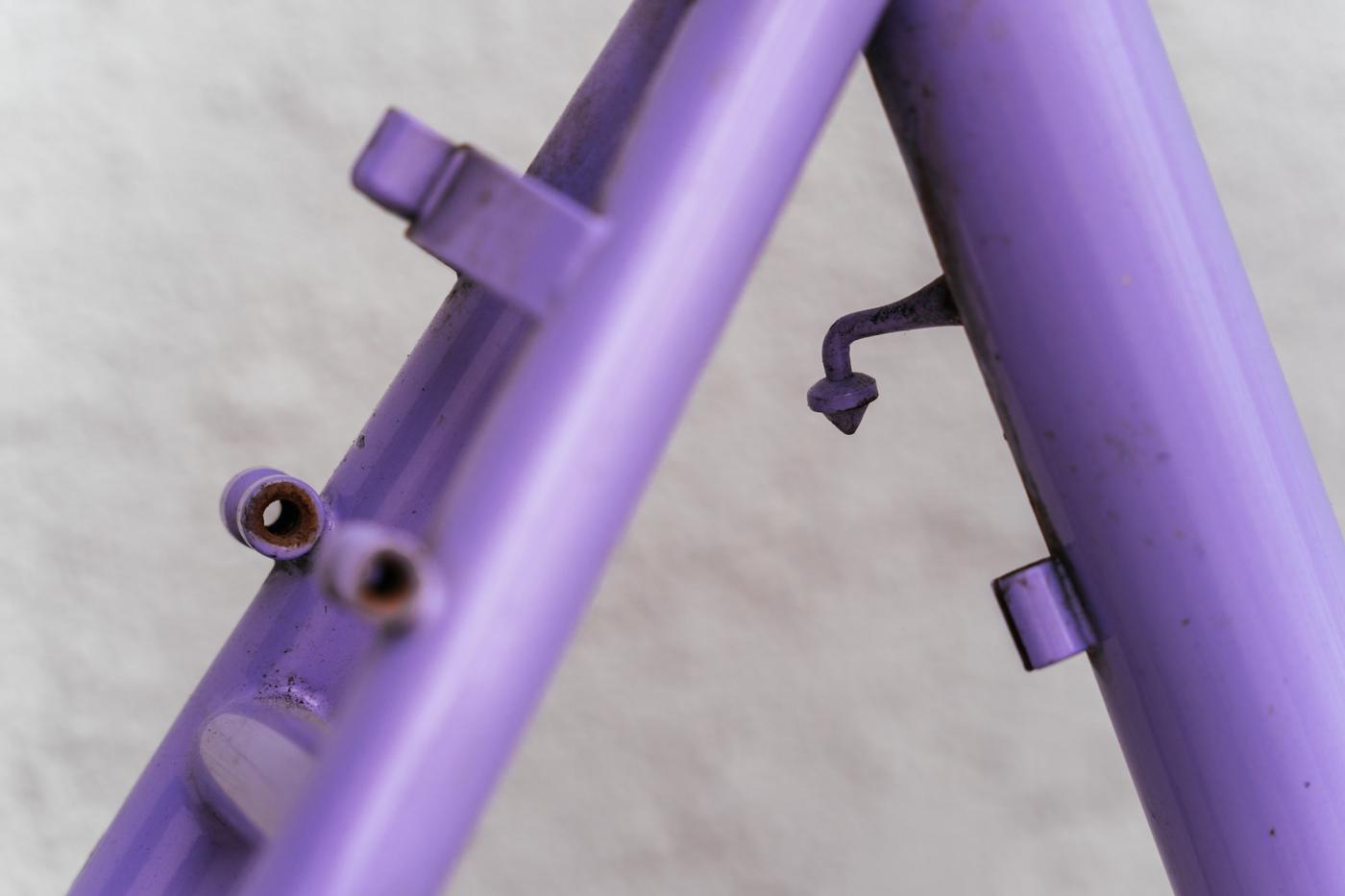 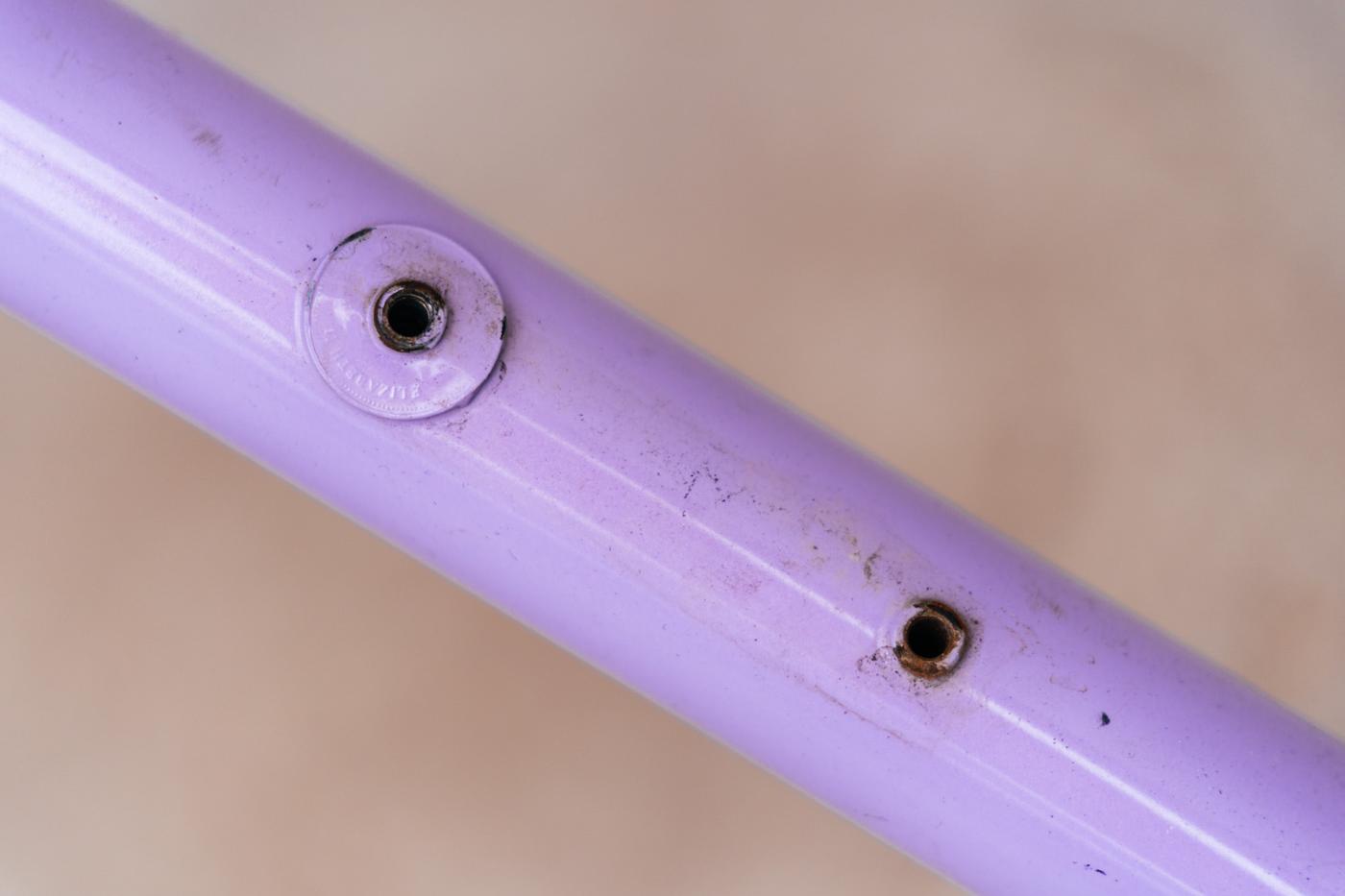 In going over the frame, I found a number of remarkable details. There’s a mini pump peg on the non-drive side. Rack mounts on the seat stays and one of the bottle bosses was reinforced with a Canadian coin. An early cargo cage used on the bike may have added additional leverage to the lightweight “racing” tubeset and the bottle boss may have popped out, necessitating the reinforcement. Neat. (I also like to imagine the owner of this bike was touring in Canada when it happened. Regardless, it’s a mystery worth pondering! Also, this is such a fitting detail with Queen Elizabeth II’s passing last week.) 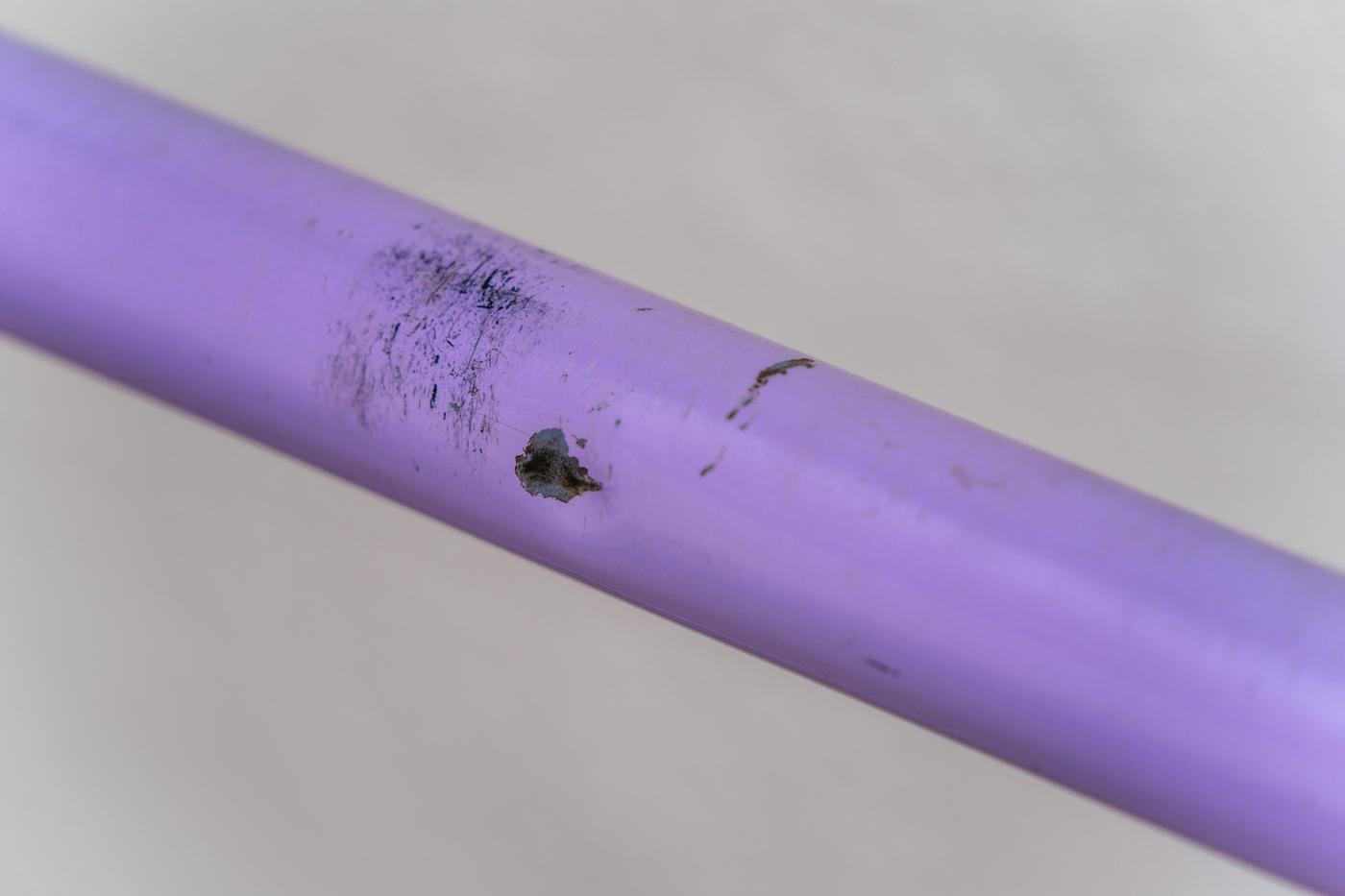 On the non-drive side of the top tube, there’s a small dent, about the size of an eraser tip. Rick at D&D (who’ll be doing the respray) has removed hundreds of dents using a few methods over the years. Depending on the location, you can “roll” the dent out using wood blocks. If there isn’t a ridge or a hard line around the ding, you can also fill it with brass. Some painters will even use Bondo, which is used in filling in fillet pinholes or cleaning up lug shorelines. Rick has yet to see this dent in person, but I trust he’ll be able to repair it, resulting in a nice, smooth top tube. 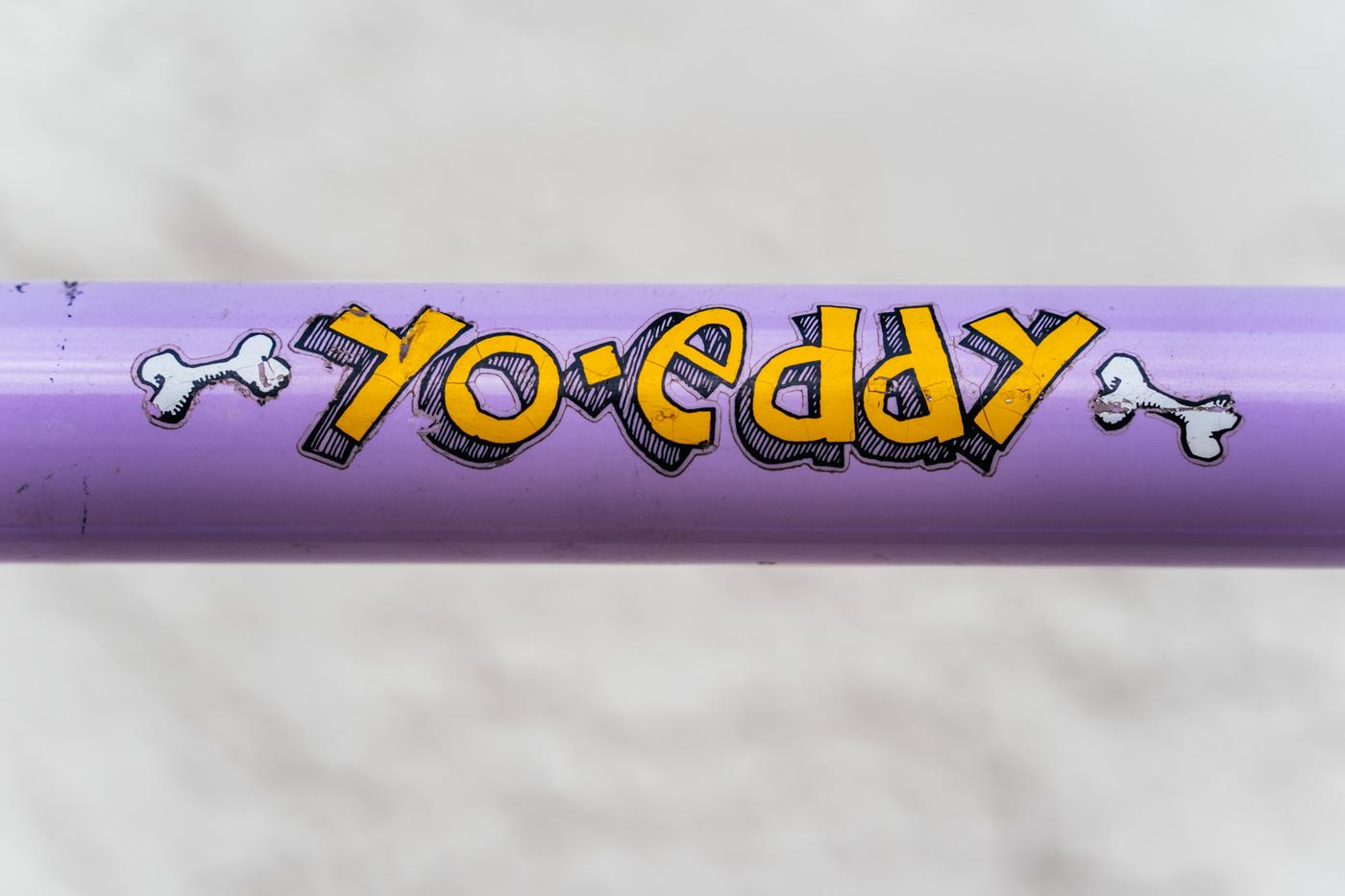 The Cost of Restoration

As you might assume, none of this is cheap. Good paint can cost upwards of $3000 depending on the painter and the client’s needs. Luckily, we’re not doing an elaborate paint job, though these were quite characteristic of the era (like this ombré fade paint job, or this tape splatter paint job). Instead, I instructed Rick to keep the Yo lavender team color with yellow accents on the decals.

For the cost of blasting the frame raw, repairs, and all the prep involved with the respray, you can expect to pay around $1000 – $1500 from an artisan like Rick for a single color job. Other painters might be cheaper but there’s usually a pretty sound correlation between cost and experience. Add in the cost of a frame, which can run about the same as the paint job, and you’re looking at the price for a brand-new bike from a small builder. Of course, you can always repair the paint yourself. Like what I did with my Ritchey Tam. Aside from eagle-eye collectors, no one will know the difference.

So why not ask a builder to recreate a 26″ Yo Eddy for me? In my opinion, each of these bikes has a story. One that’s worth investigating, researching, and documenting. These bikes are getting older, so it feels like part of this restoration is the preservation of the talent of an era.

Then, you’ve got to find the parts… which is where our story will continue next week!