Miguel Indurain was the king of the Tour de France in the ’90s, winning five times consecutively. He was one of my teenage cycling idols, and coincidentally he and I share almost the same bike measurements; however, the similarities end there! I always thought it would be a fun project to build an everyday rider that was an Indurain Pinarello Banesto replica. Here’s how I got my “Big Mig” bike up and running. The heart of any bike is obviously the frame. I found a ‘90s Pinarello Asolo for a steal on eBay from Austria. Pinarello is a brand close to my heart as they were the bike sponsor of the very first pro team I ever rode for, De Nardi. The team was an absolute disaster, but I lived close to the Pinarello factory in Treviso (where this frame was built). When I visited a few times, the folks there were always incredibly friendly and helpful. I also had the fortune to meet Giovanni Pinarello at their shopfront in downtown Treviso. 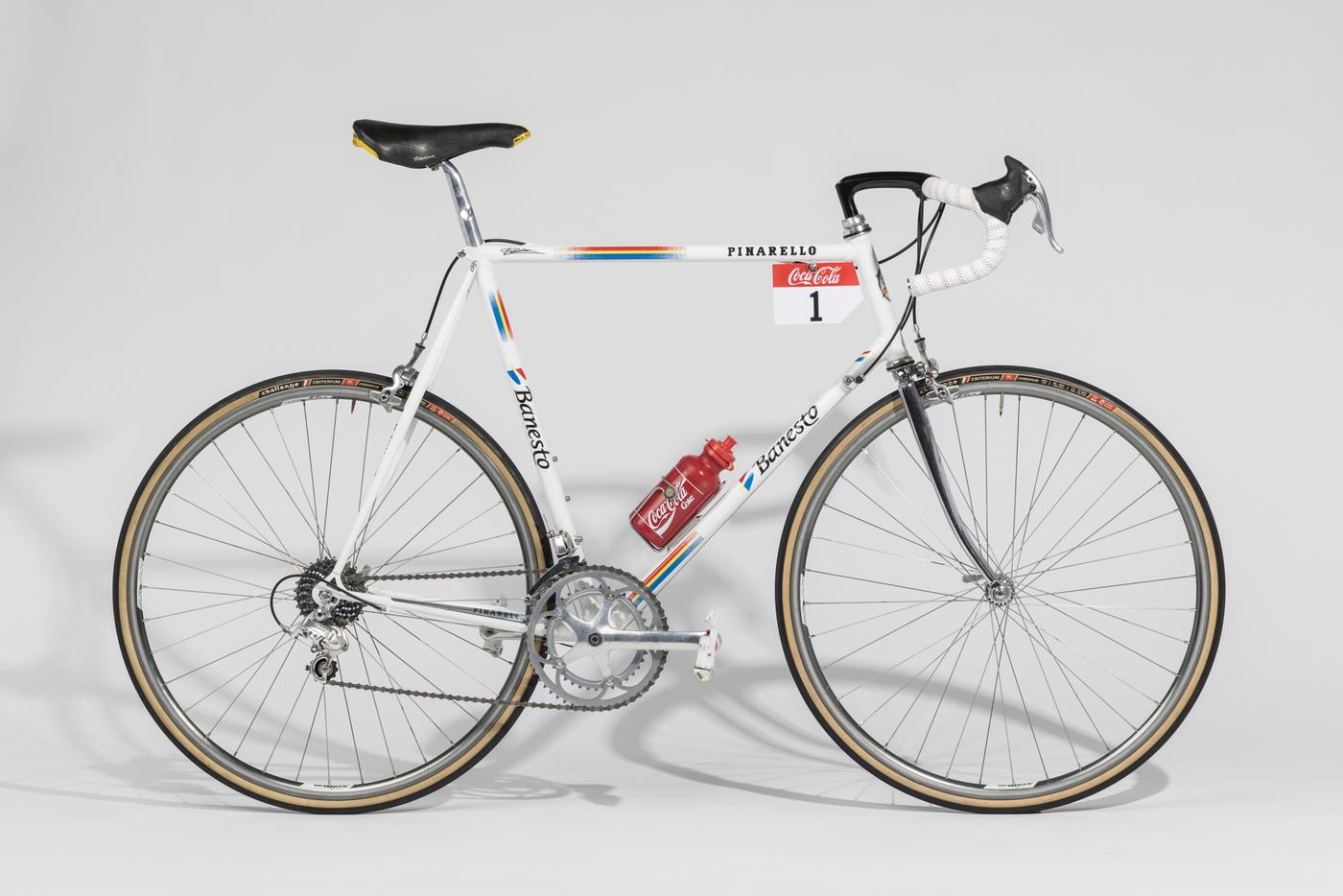 The Asolo model is named after a small town in Veneto that I passed through many times on training rides, so this frame brought back a great deal of nostalgia for me. I thought it would be perfect, but the paint and decals were obviously incorrect for this project. So, I shipped the frame out to my friend Alan Wanta in Florida for a makeover. I also had Alan remove the pump peg and add a brazed-on number holder. The first component I sourced for the build was a very sad Campagnolo Record/C-Record seatpost that was destined for the trash. It was pitted and had bite marks on it where it appeared to have been clamped in a vise, probably to remove it from a frame it was seized in. A couple of nights in the garage with a Dremel, some sandpaper, and a polishing wheel got it looking almost as good as new again.

During the ’90s, Indurain always used a Selle Italia Turbomatic saddle. This was another eBay find, and some leather polish got it looking good again. 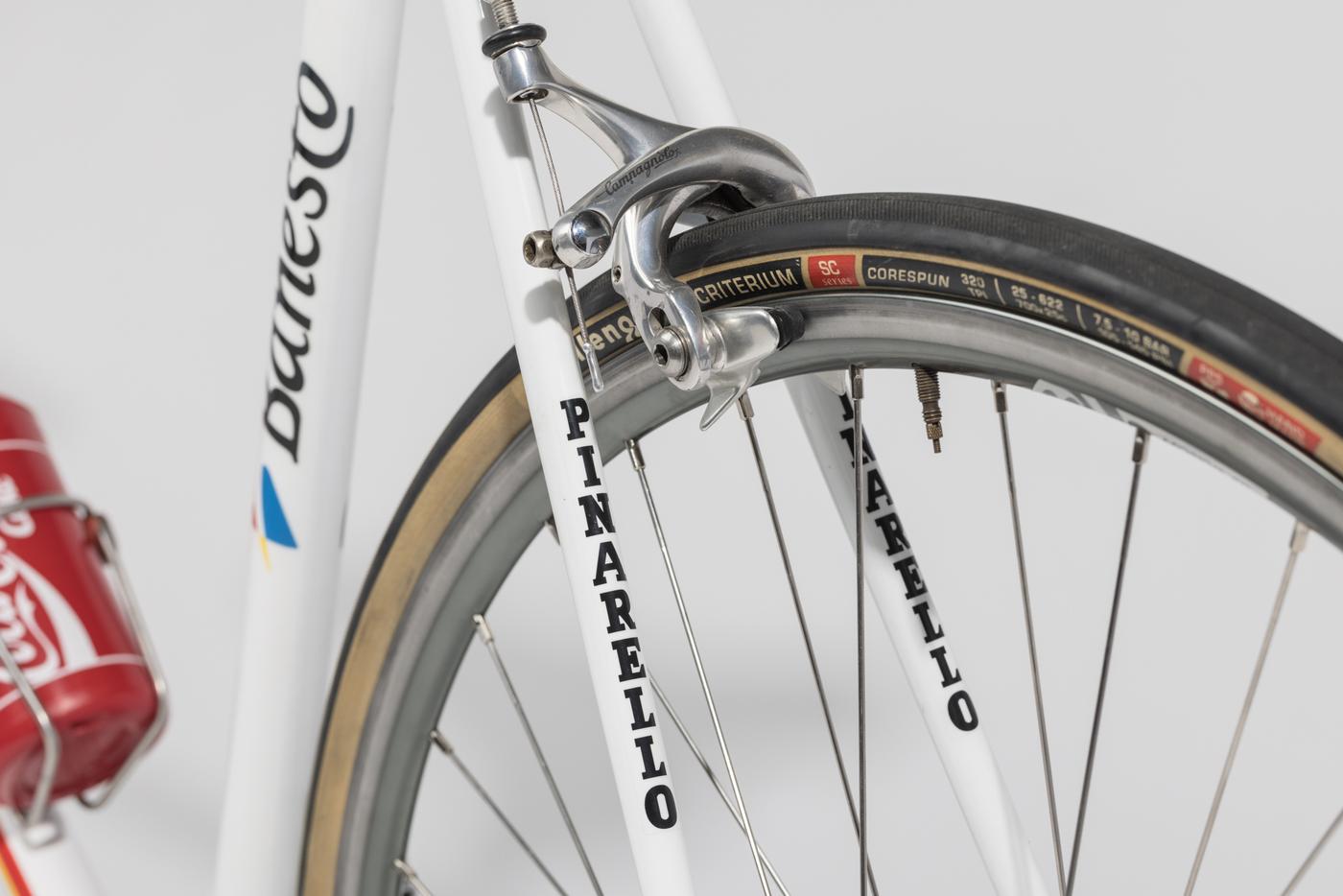 After the frame, the next most important part of any bike is the wheels. On Facebook Marketplace, I found a pair of ‘90s Record hubs, built into wheels with rims that were no longer round. I cut out the hubs, polished them, and repacked them with fresh grease. EBay again came up with the goods with a pair of Campagnolo Moskva 80 rims that would fit the bill perfectly. The parts went off to my good friend and wheel building maestro Peter Chisholm to be built. 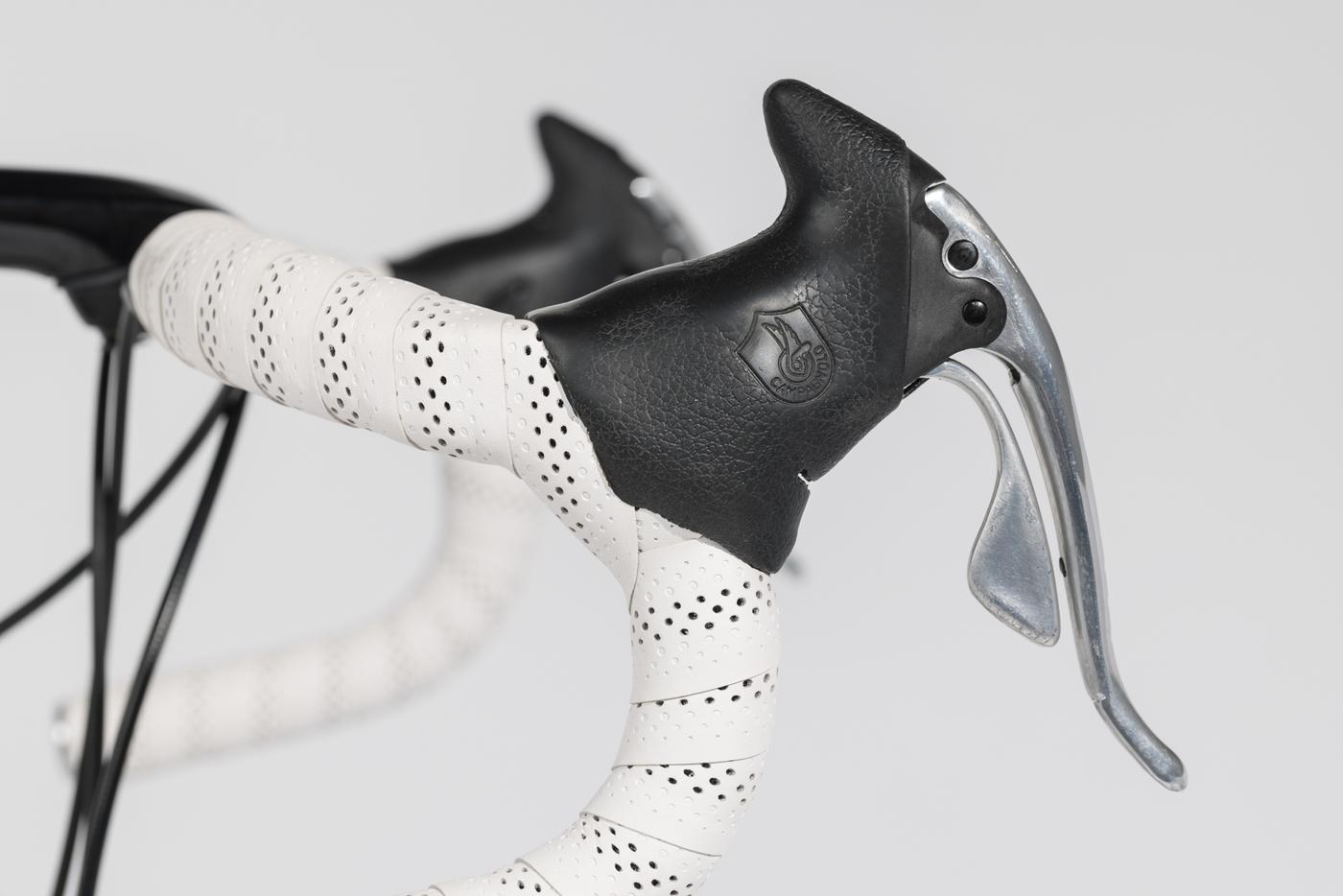 These aren’t strictly the correct Ergopower levers, but they were the best thing I could find without breaking the budget. They are a pair of ‘95-ish Chorus levers that were pretty battle-scarred. Some sanding and polishing got the lever blades looking good again, I already had some rubber hoods in decent shape, and my buddy Peter rebuilt the internals, so the shifts were crisp again. They are like grandfather’s axe, a new handle, and new axe head, but it’s still grandfather’s axe!

In the 1990s, Coke was a major sponsor of the Tour de France, and every rider had one of these number plates on their bike. A trip to Michael’s for some supplies, some Coca-Cola stickers from Etsy, and a night of arts and crafts got this reproduction of Indurain’s number 1 knocked up. 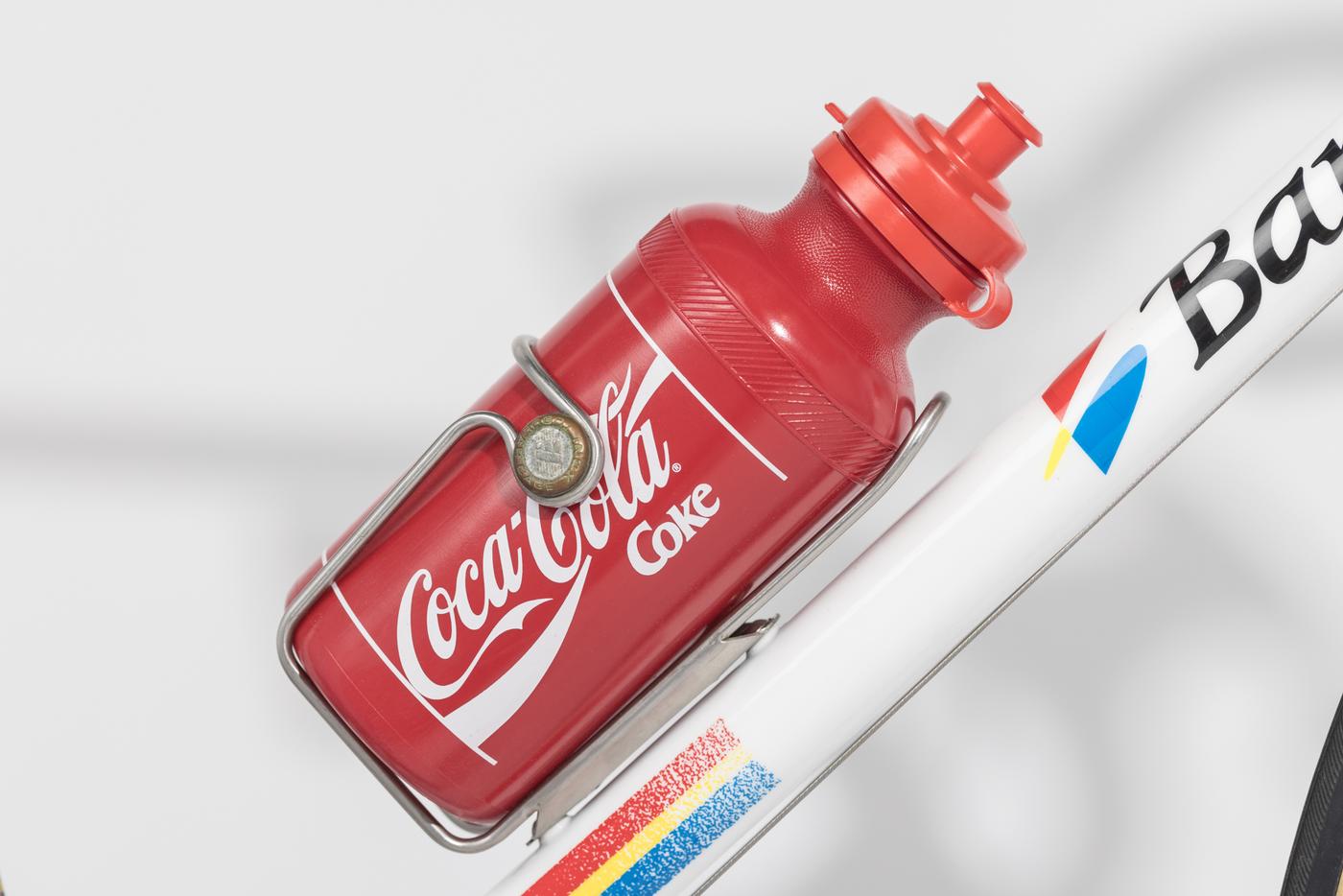 This Coca-Cola Tour de France bidon came to me from Belgium and is exactly what would have been used in the ‘90s Tours. The Elite bottle cage was pretty much the only cage to use in that era. The handlebar tape is my favorite; it’s modern Fizik tape but is plain perforated white and looks great on any bike. I thought the Banesto bar plugs would be a nice touch, and they came from an eBay seller in the UK. 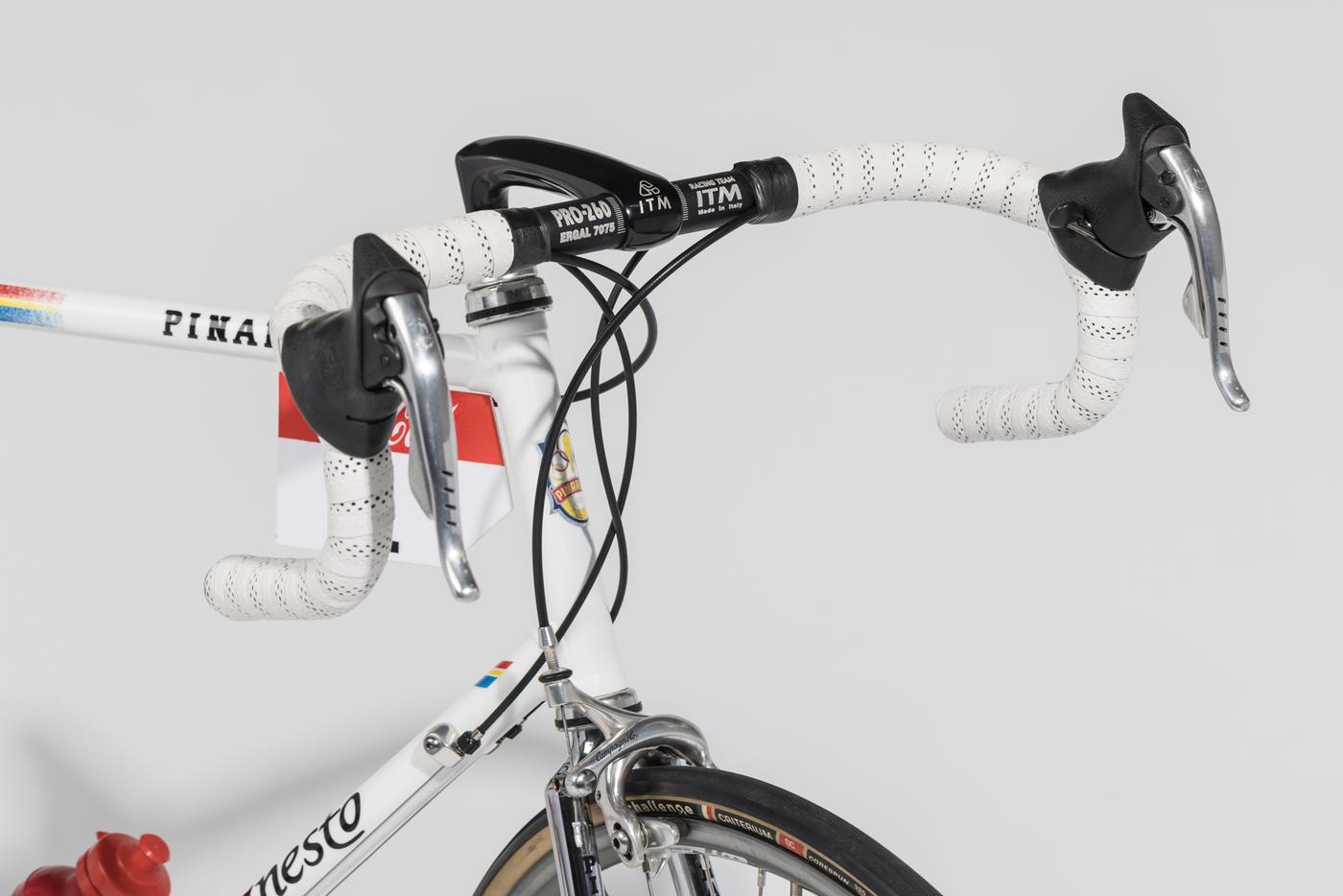 The bars and stem were some of the most challenging parts of this project. A pretty big fella, Indurain used 46cm ITM bars which actually measure 44cm center to center. He never used the “anatomic” shaped bars, so this round “non-anatomic” set took a while to track down. His bikes were built with a 59cm top tube, but the Pinarello frame I sourced had a 58cm top tube, so I would need a 140mm stem to make it fit.

After months of searching, finding the correct ITM 400 stem in black and 140mm length proved impossible. I eventually found this lovely ITM 700 stem that was the next best thing, but the problem was that it was in South Africa! A dear old friend in SA did all the legwork, tracked down the stem, and bought it for me. Then, in a perfect twist of fate, another mutual good friend of ours finally got his U.S. residency after a long wait and brought the stem over on his immigration pilgrimage to the U.S.! 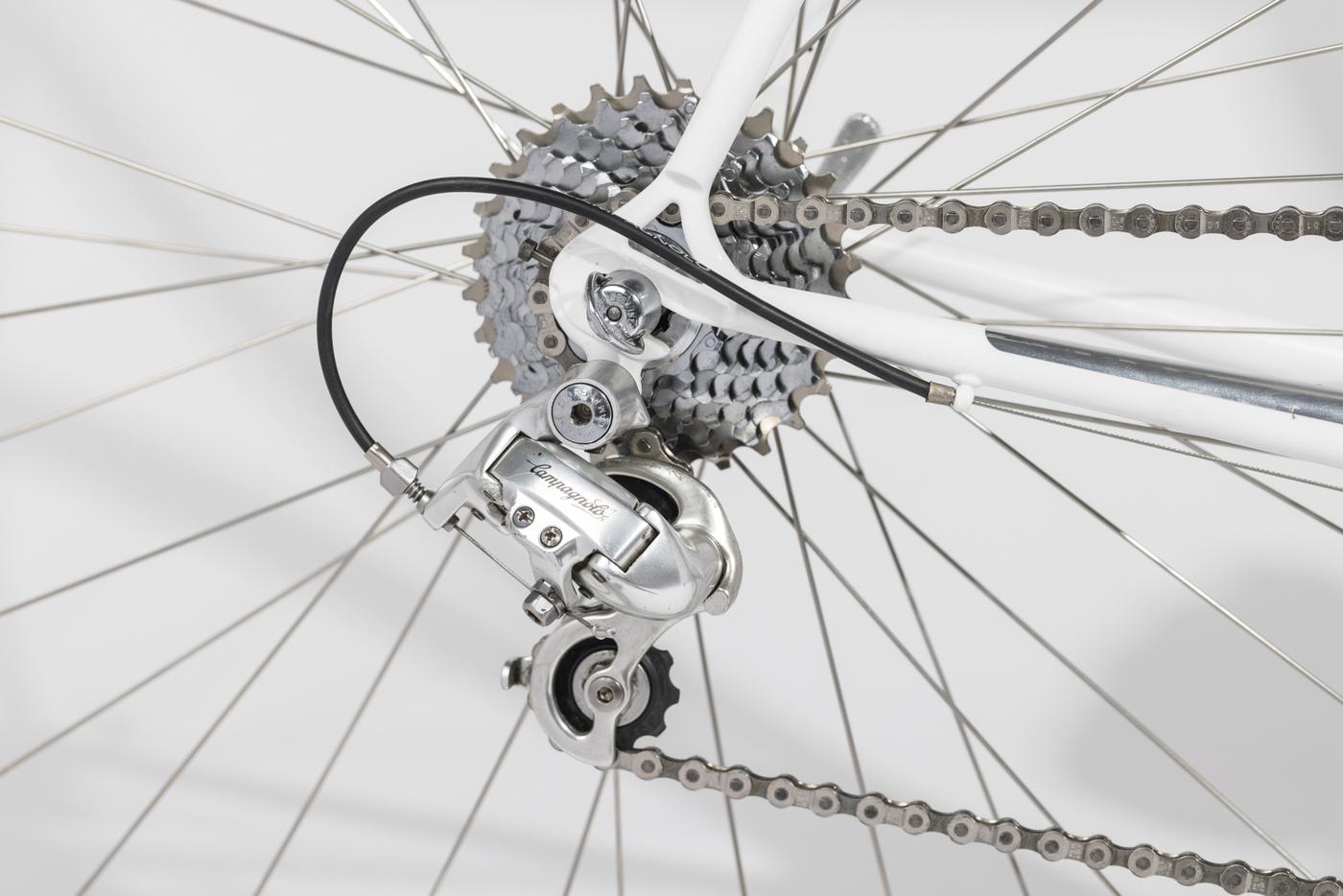 Indurain used Time pedals in the ’90s. They were a controversial product at the time as pedals with a lot of float like the Times were not popular yet. This pair set me back a whopping $5 at Veloswap in Denver.

I didn’t anticipate the issues I would have finding the correct 8-speed Record rear derailleur! The main problem is that many derailleurs from this era end up cracking on the top of the body where the attachment bolt passes through. Many people told me that they had used these derailleurs, with the crack, for years and years with no issues. But I wanted a nice (uncracked) one for this bike. However, almost every one I found or saw come up on eBay had the typical crack.

There were also minor differences between the ‘92, ‘93, and ‘94 models, even though they look almost identical. In ‘93, the Record derailleur seemed virtually identical to the ‘92, only it had an entirely different thread size on the cable adjuster. The ‘94 is again almost identical to the ‘93, but the sealed bearing pulley wheels (like mine above) were dropped in ‘94 for pulley wheels with bushings. I am reasonably (but not completely) sure I have a ‘93 Record 8-speed rear derailleur. After that bloke from Texas had his TDF wins scrapped from the books, every Tour in the ‘90s was won on Campagnolo Record. It was a bit of a weird conglomeration of stuff in the early/mid-‘90s, there were the groundbreaking Ergopower levers and dual pivot brakes that Campagnolo came up with to compete against Shimano’s Dura-Ace STI, but some of the parts like the crankset, headset and front derailleur were parts that were simply carried over from the C-Record groupset. Those components had already been in use since the mid- to late-‘80s.

But to me, this was the end of the Campagnolo golden era. Before, none of the parts had model names, which just added to the mystery and required a solid education in Campagnolo to decipher one model group from another. In 1995, Campagnolo rolled out its low-profile cranks and a bunch of new parts for the Record groupset. It also started printing the model name on most components, which completely killed the fun, if you ask me! This is one of the things that makes these ‘92-’94 components some of my absolute favorites.

Here I must confess that the bottom bracket I used is a much more modern Campagnolo Veloce model that was made for that 9-speed group. A correct 111mm Record bottom bracket is quite a tricky item to find, and I happened to have a few of these Veloce BBs that I stockpiled a few years ago when I found them for a “never to be repeated” price! 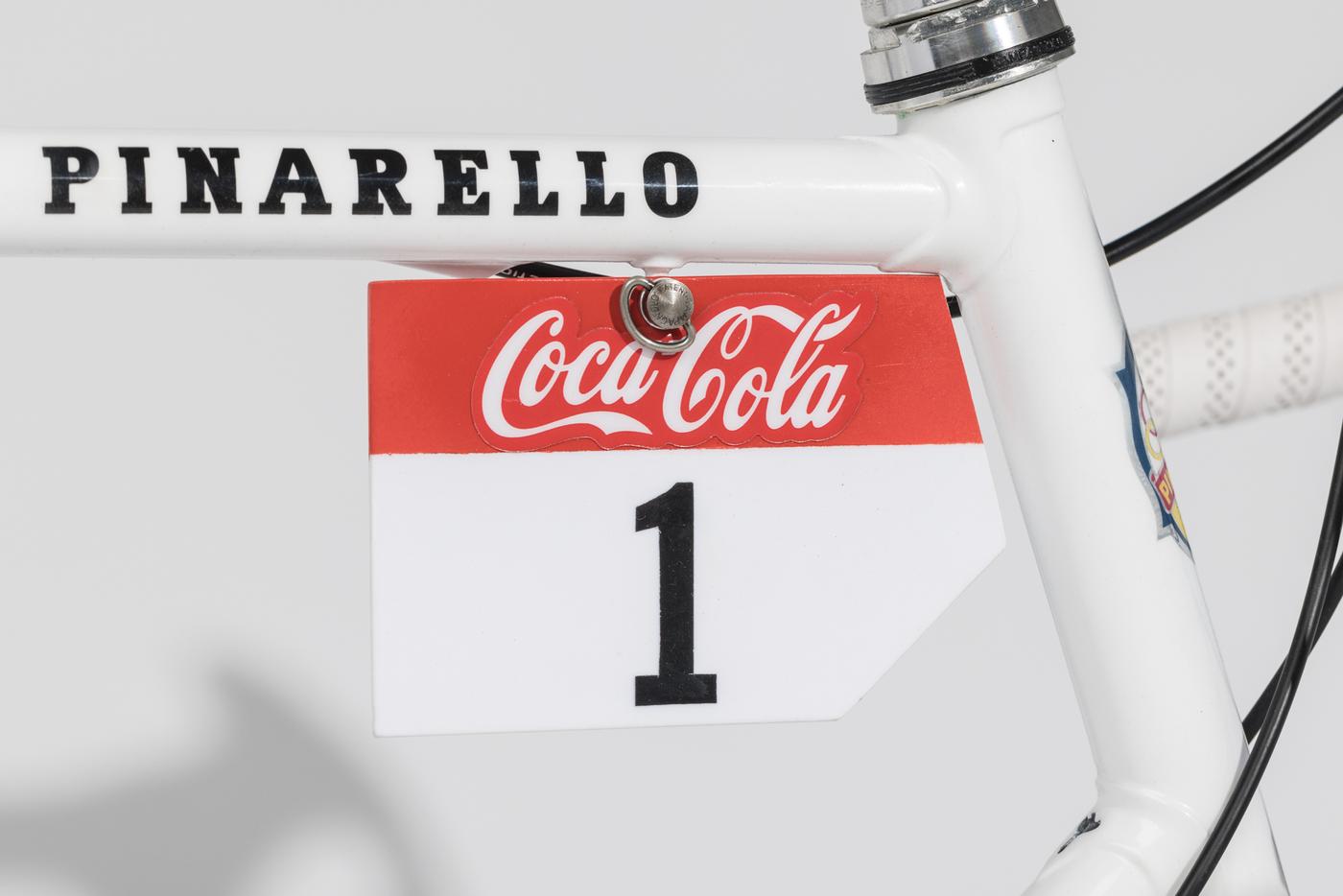 So, How Does it Ride?

Honestly, this is a mid-range Pinarello frame transformed into a replica of the bike Indurain used. In contrast, Indurain’s actual race bikes from this period were custom-built by the legend Dario Pegoretti, back when he was a contract builder for Pinarello, before he discovered fame as a builder under his own name. 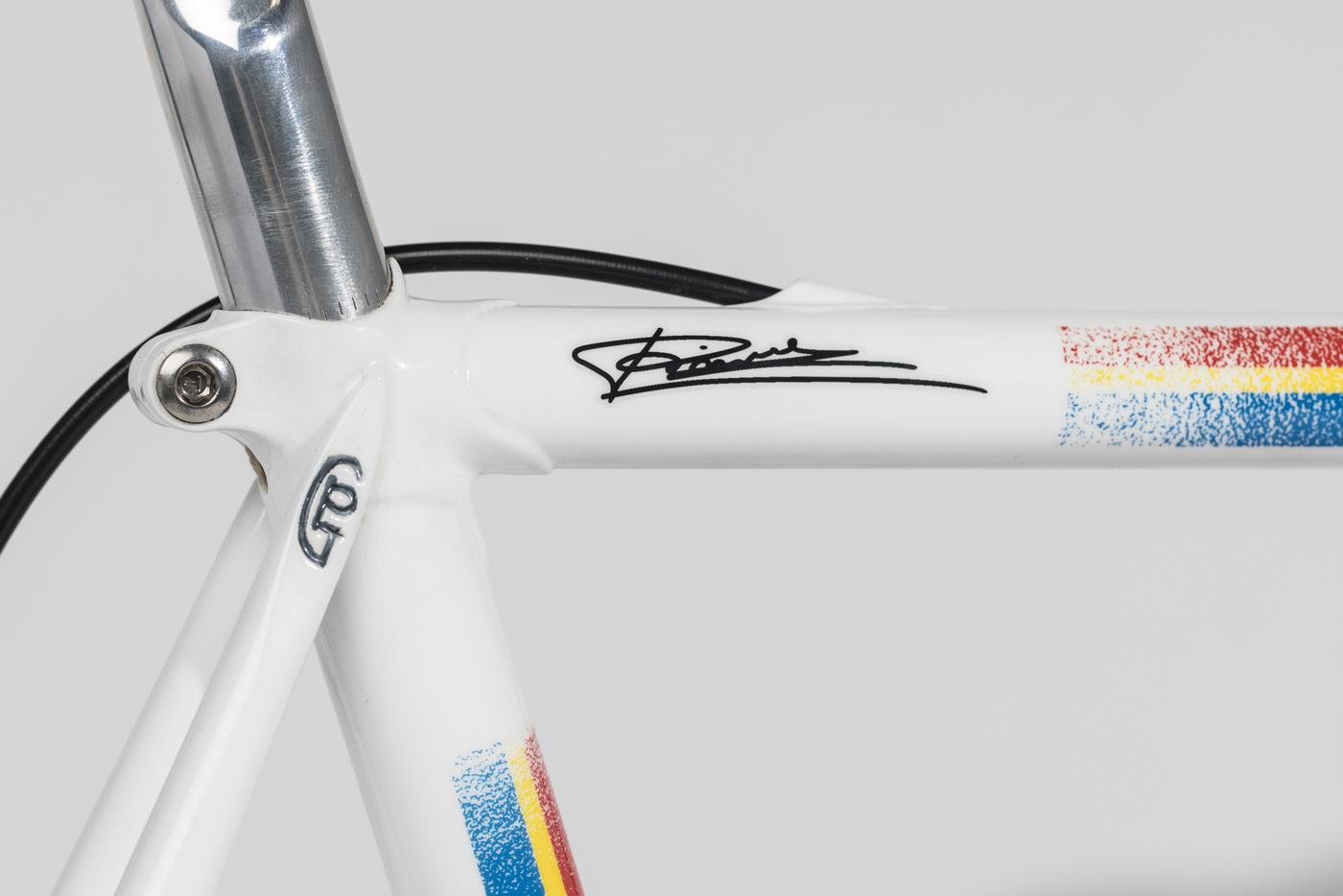 But the components and bike fit are almost identical to what Indurain rode, so I feel the bike is close to how it would have felt to ride one of Indurain’s ‘93/’94 bikes.

The components are rock-solid. Campagnolo Record shifts crisply, and with only eight gears on the back, it rarely ever seems to go out of adjustment. The front derailleur has infinite trimming, so the chain never rubs. Many riders with big hands believe that the Ergopower shifting, with an inner button for downshifting rather than a second lever, is easier and more intuitive to shift, and I agree. The large shifters also feel great ergonomically for those of us with big hands. The dual-pivot brakes work as well (if not better) than any rim brake out there. One interesting tidbit is that there is no quick release mechanism on the brake caliper but rather a release on the brake lever, which lets the lever out further to move the caliper arm away from the rim. If you look closely at images of Indurain climbing in the 90’s he would often release his levers on climbs so that the rim wouldn’t rub on the brake pads when the wheels flexed as he climbed out of the saddle! 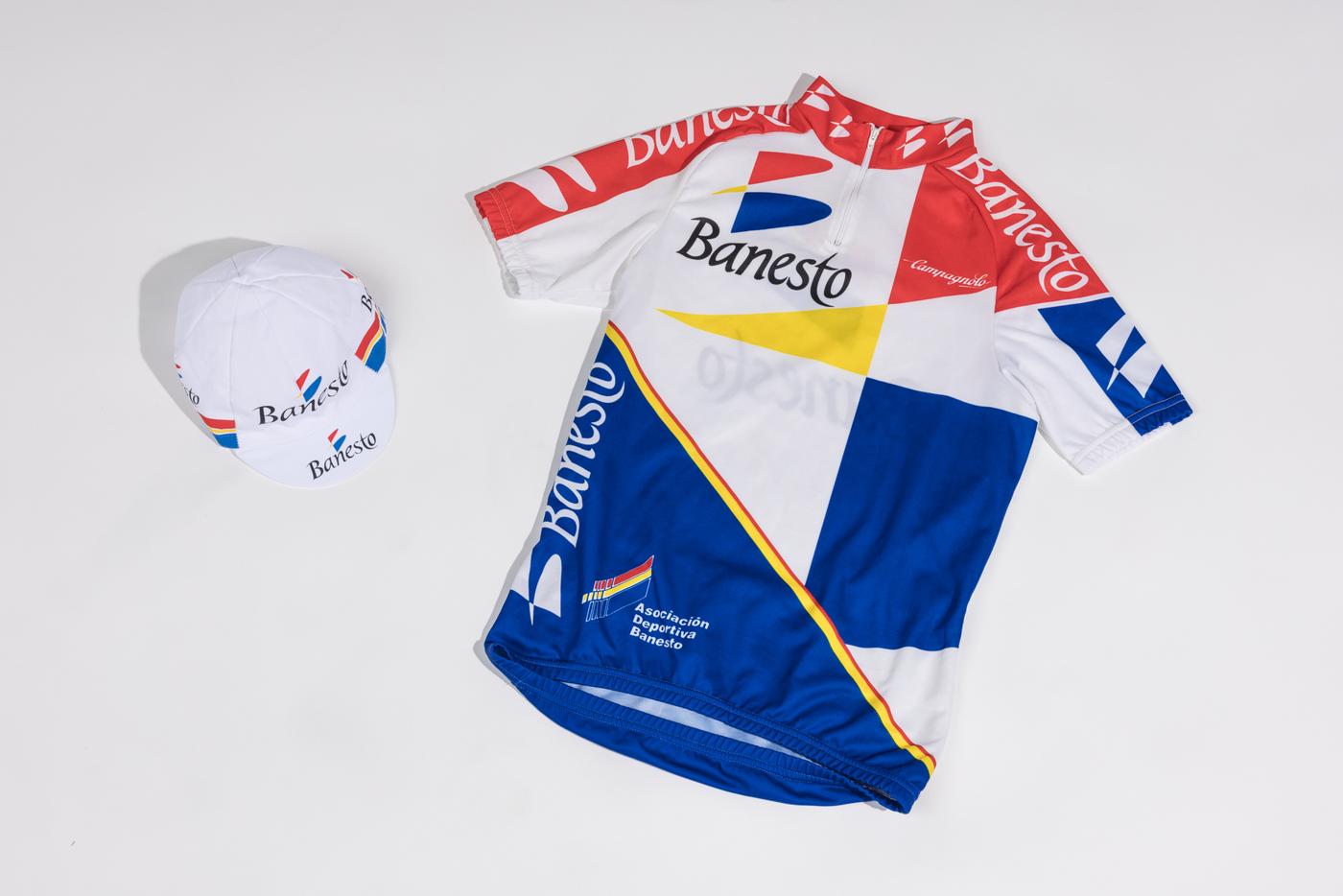 Oh, and this bike is heavy! I didn’t dare get it on the scale, but bikes from this era were far from light. Everything is steel or aluminum. For example, the stunningly beautiful Record bell-shaped rear hub weighs about the same as a complete modern wheel.

The most significant difference I notice when getting off a modern bike onto a bike of this era is the amount of flex in the front end. With a 140mm quill stem and 44cm bars, there is a lot of leverage and a lot of flex through a big frame. It is a massive contrast to the stiff front ends of modern bikes. But there is also something about well-built frames from this era that is hard to explain. Pinarello (and Merckx, in my opinion) managed to perfect the angles on their frames, meaning they were exactly proportioned and amazingly comfortable to ride. And despite the flex of large steel frames, they descend like they are on rails.

There is no doubt in my mind that the evolution of modern bikes gave us lighter, faster, and far more aero rides, but there is something heartwarming about getting on a steel bike for a leisurely ride, much like an old pick-up truck with a worn bench seat and a stick-shift.