He had used it to stay in shape after playing college football and had even raced on it. Now he was about to retire and wanted to have the bike returned to its former glory in order to start riding again. It had sat in his garage for 25 plus years and he wasn’t sure if he had the wheels anymore, but was going to dig around for them. He left promising to return the next day, with Simon and I super curious as to what style and shape of Colnago would appear. 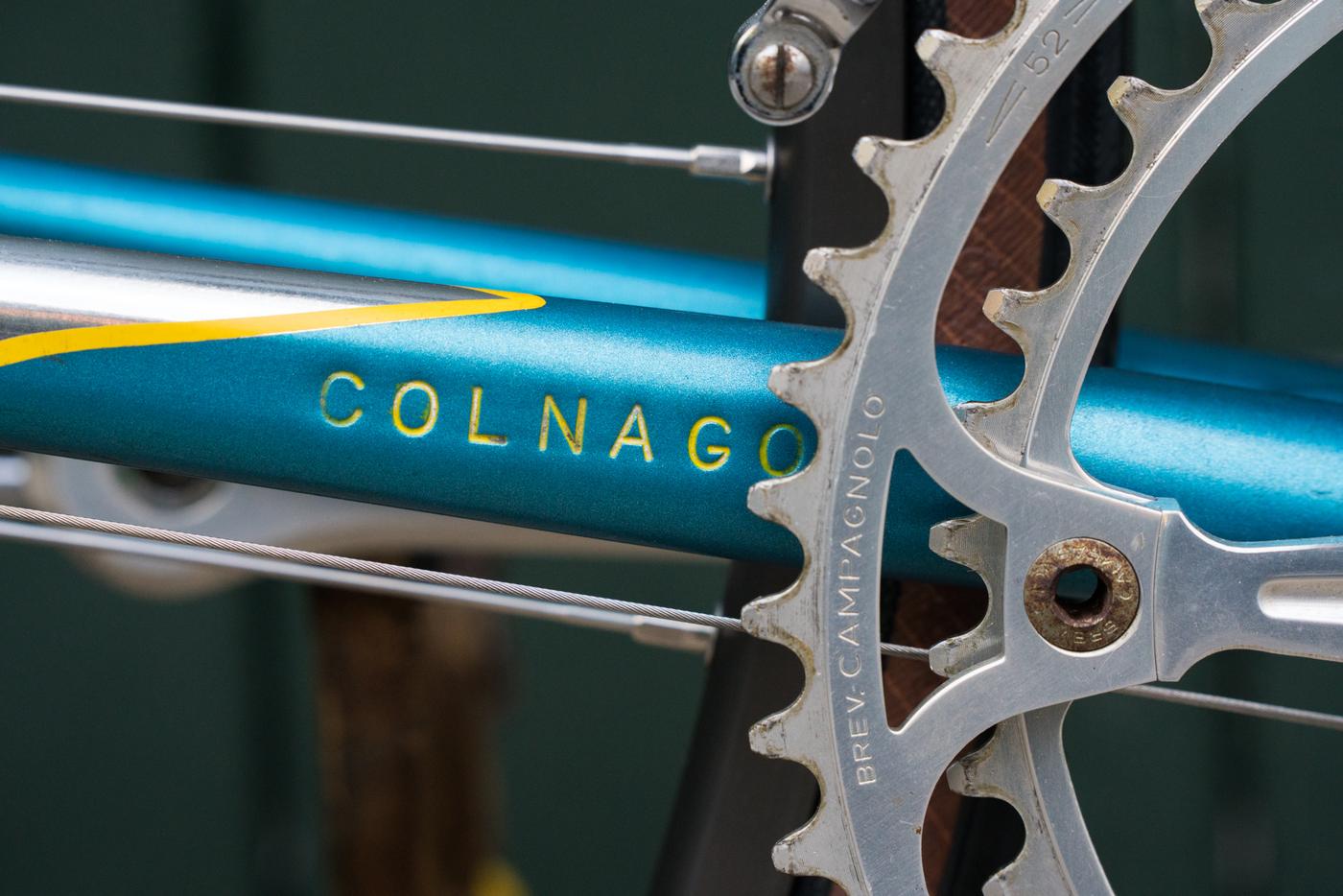 As promised, John pulled up with a very surface rusty chrome, decals cracked and peeling, but underneath super solid Colnago. It definitely needed some love but under its rough exterior, there was for sure something worth saving. That would have been a great time to take some before pics to show you! Of course in our excitement, we didn’t. Wahn wahn. 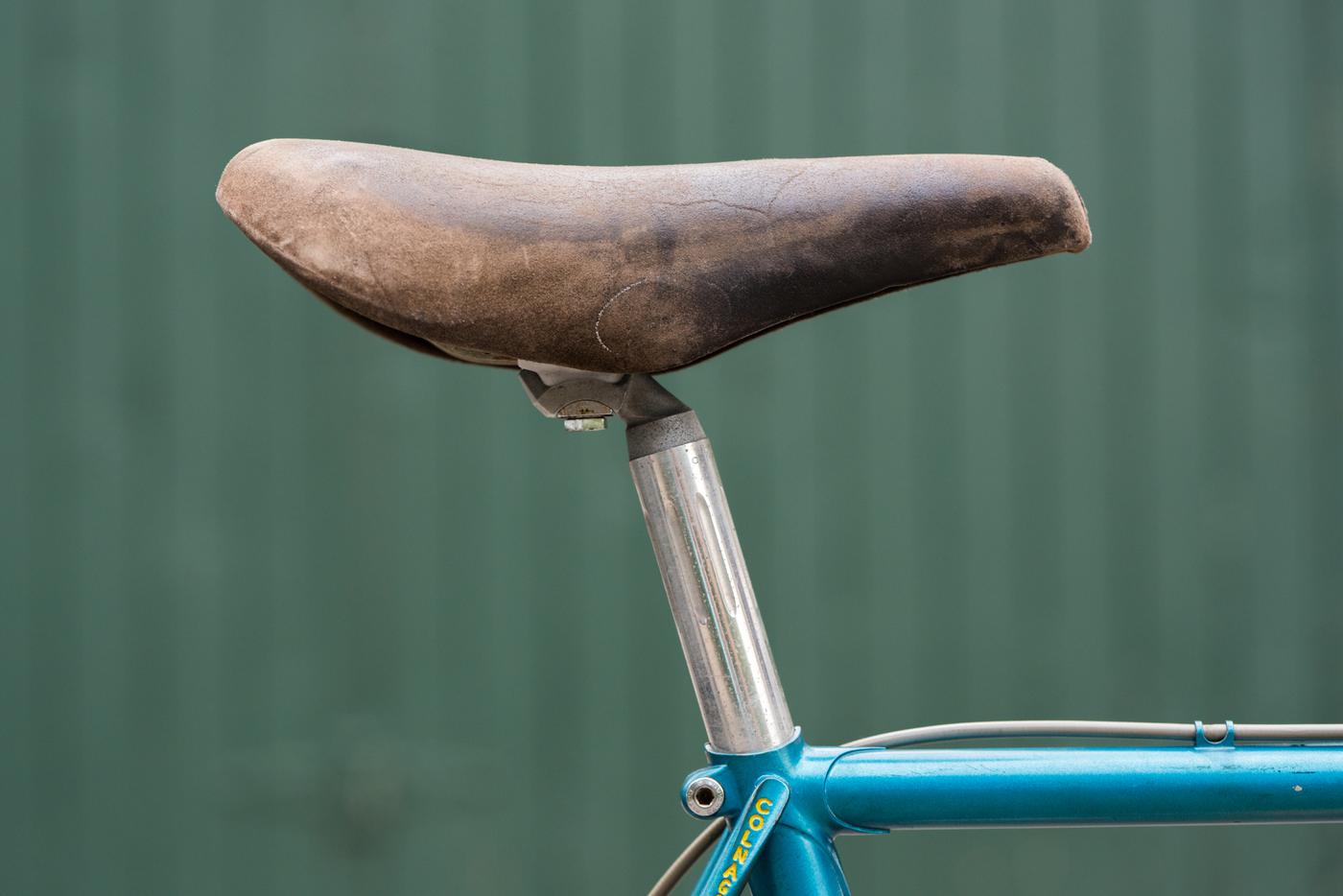 Unfortunately, he could only find one wheel, not a problem as we wanted to build him some clinchers anyway so he could really enjoy getting back into riding. He decided that he didn’t want a full perfect restoration as he had many memories with the bike and wanted to preserve the patina. I think that was such a great choice, I love perfect bikes as much as anyone, but we see so many now. Look how cool those decals and the bike’s finish looks after some care and plenty of Simon’s elbow grease. They should sell that in a tube! “Simon’s Elbow Grease…” 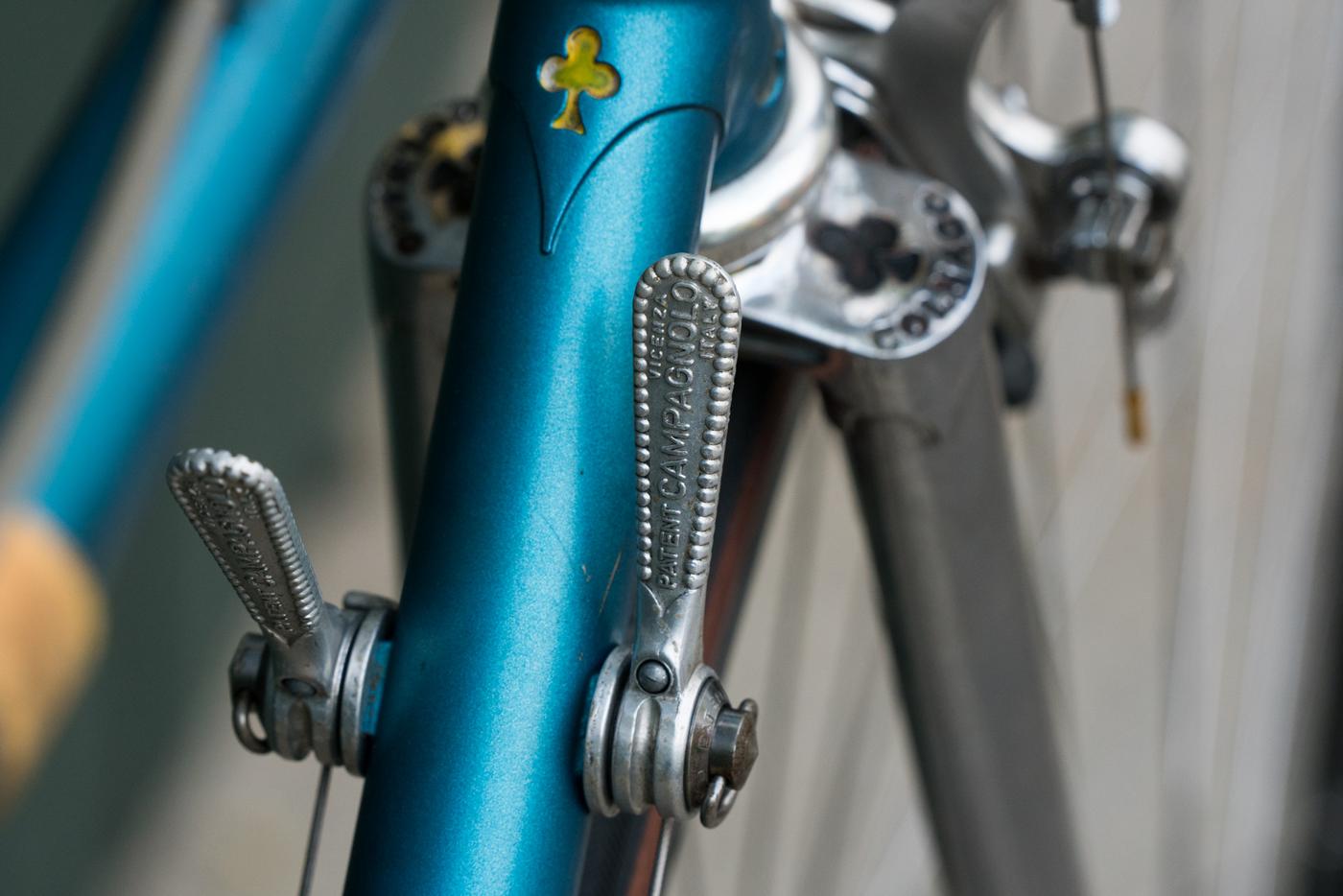 The goal was to keep as many original parts on the bike as possible while making it functional and restoring some shine. For the wheels, we sourced some NOS Campy Record low flange hubs and laced them to H+ Son TB14’s with Sapim spokes. The dark grey has the same finish as the original wheel that came with the bike, and tubulars might be cool but when you actually want to ride you can’t beat clinchers! 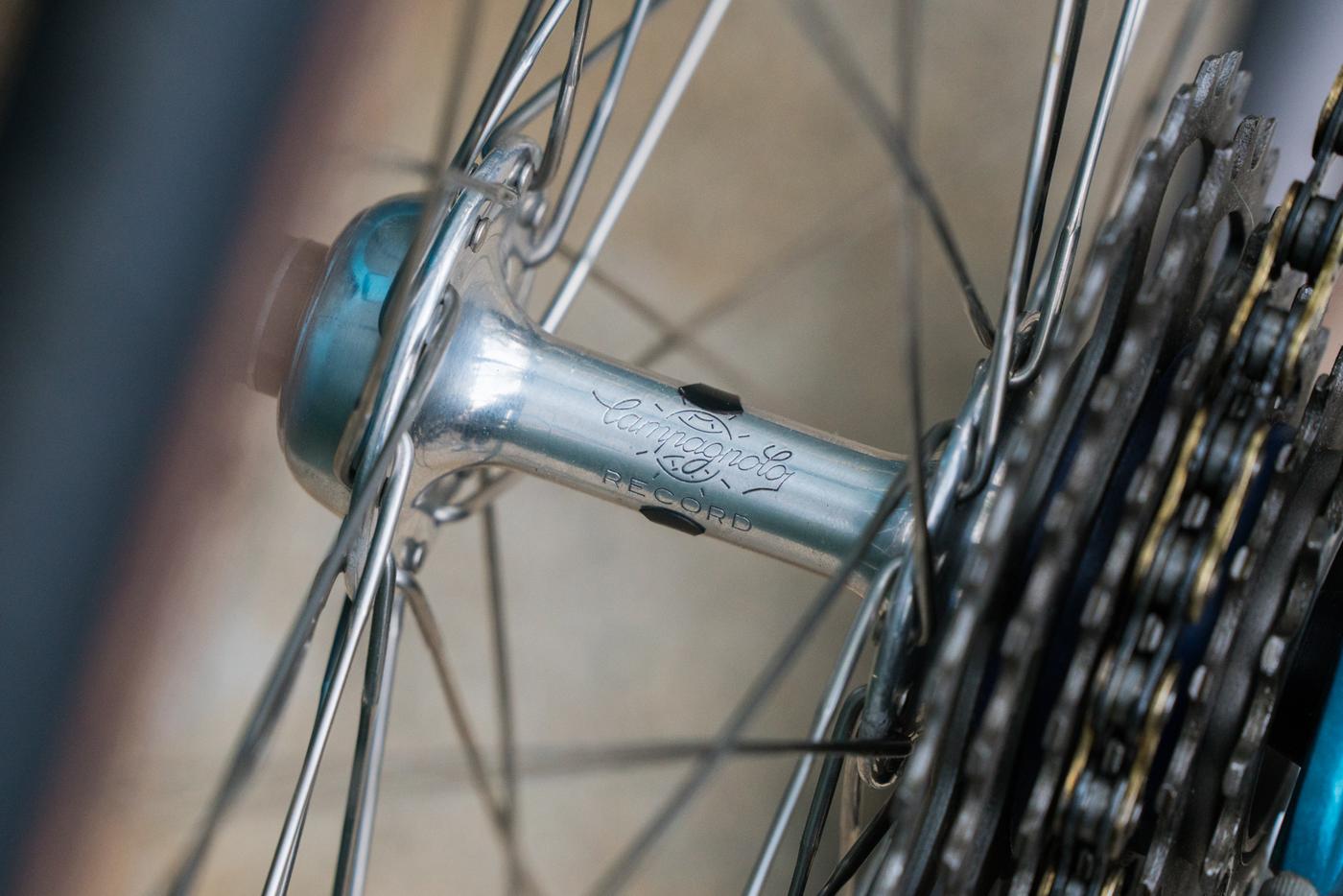 Some comfy 25c Conti Grand Prix Classics finished them off. To get the drivetrain going we found some other cool NOS bits including an “Oro” Chain, NOS Pulley Wheels, Brake Pads, and a Regina Freewheel with a 28 so he can make it up some hills. Next, Simon went to work hand polishing everything that was brown with rust to turn it back to the finish you see now. He also worked some magic on the frame to get that beautiful blue back while preserving the fragile decals. To button it up we added some yellow Benotto tape. 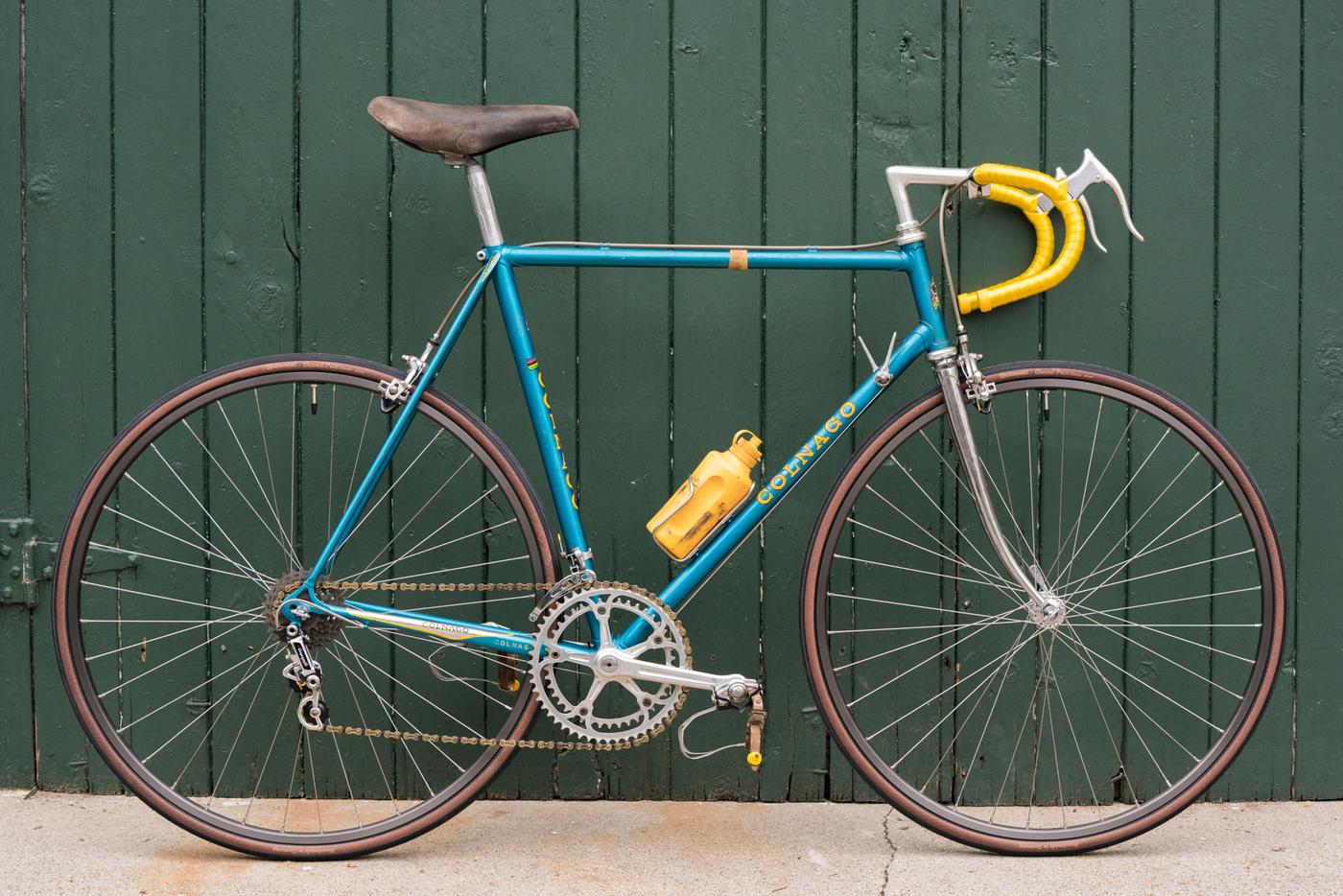