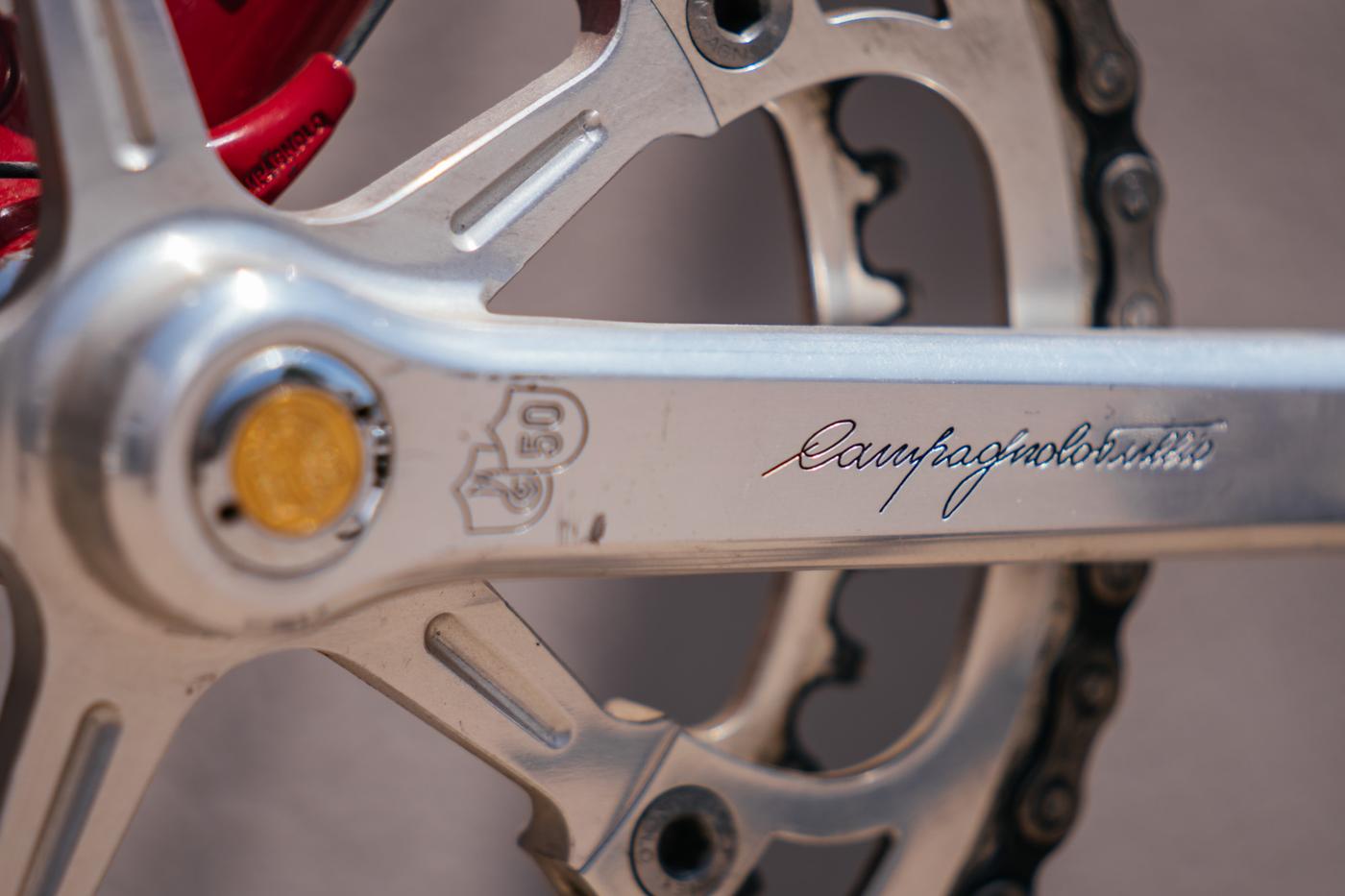 In 1983 Tullio Campagnolo, the founder of Campagnolo passed away at age 81. To honor his accomplishments, Campy took their prized Super Record Gruppo, the pinnacle of road bike components at the time, and produced the “50th Anniversary Gruppo”. This Gruppo came in a special kit box, containing a crank, pedals, brake calipers, and levers, front and rear derailleur, seatpost, front and rear hubs, bottom bracket, and even brake and derailleur cables. 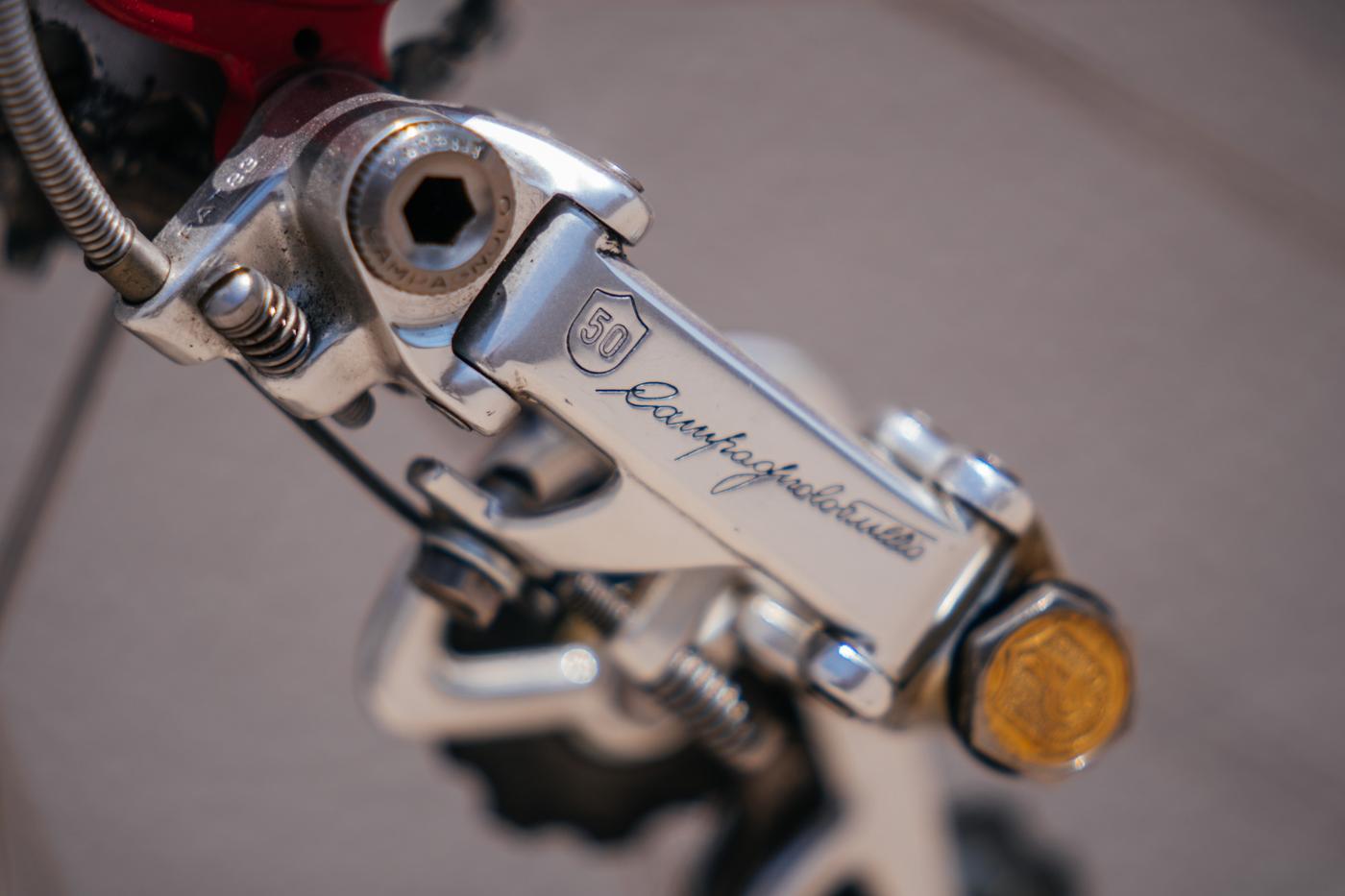 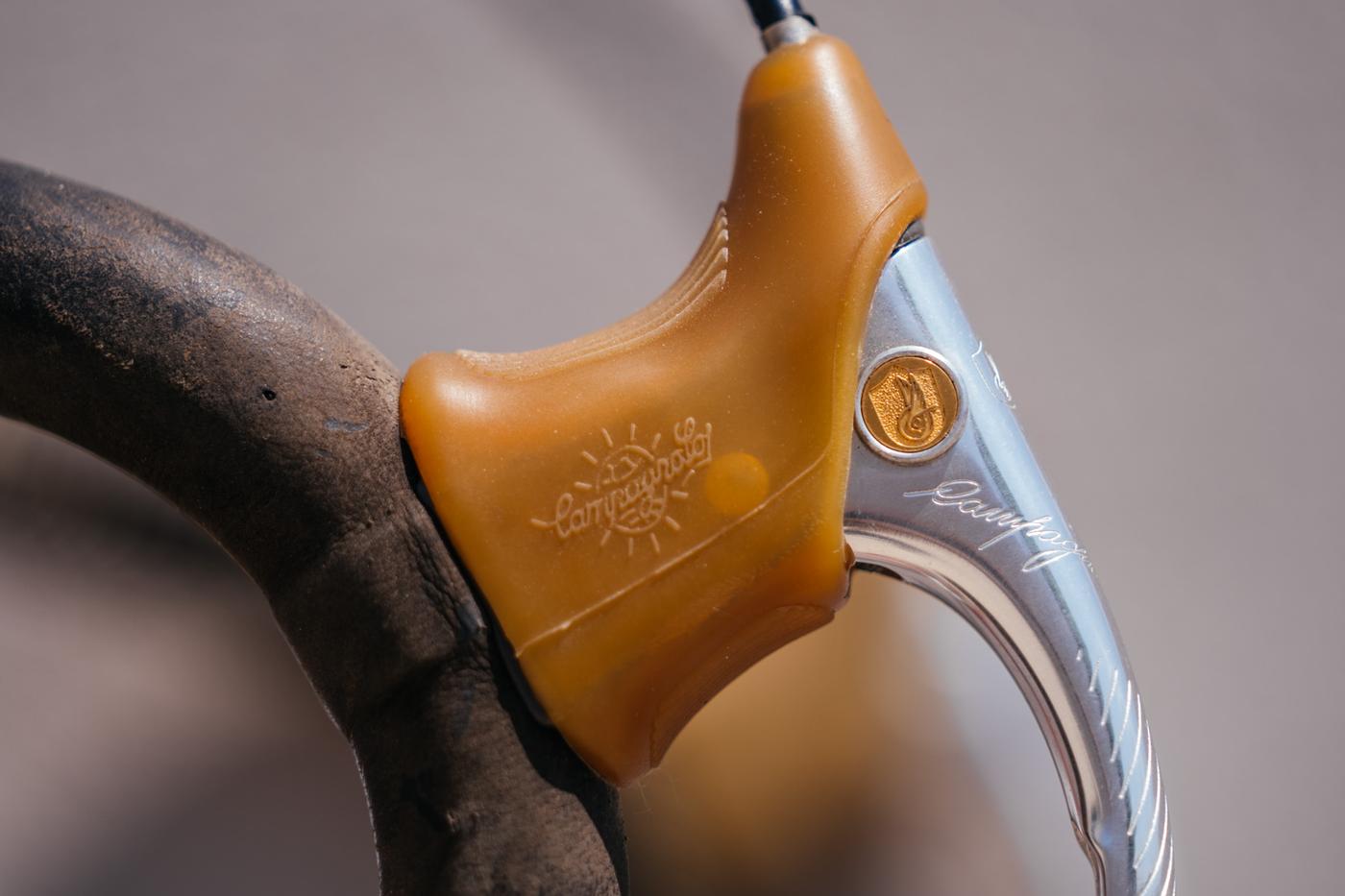 Each component was pantographed with a 50th-anniversary insignia, with the Super Record cranks adorning “CampagnoloTullio” down the drive-side crank arm. The components even had 24k gold medallions placed strategically throughout. This kit was identified through a serial number and only 15,000 units were produced. 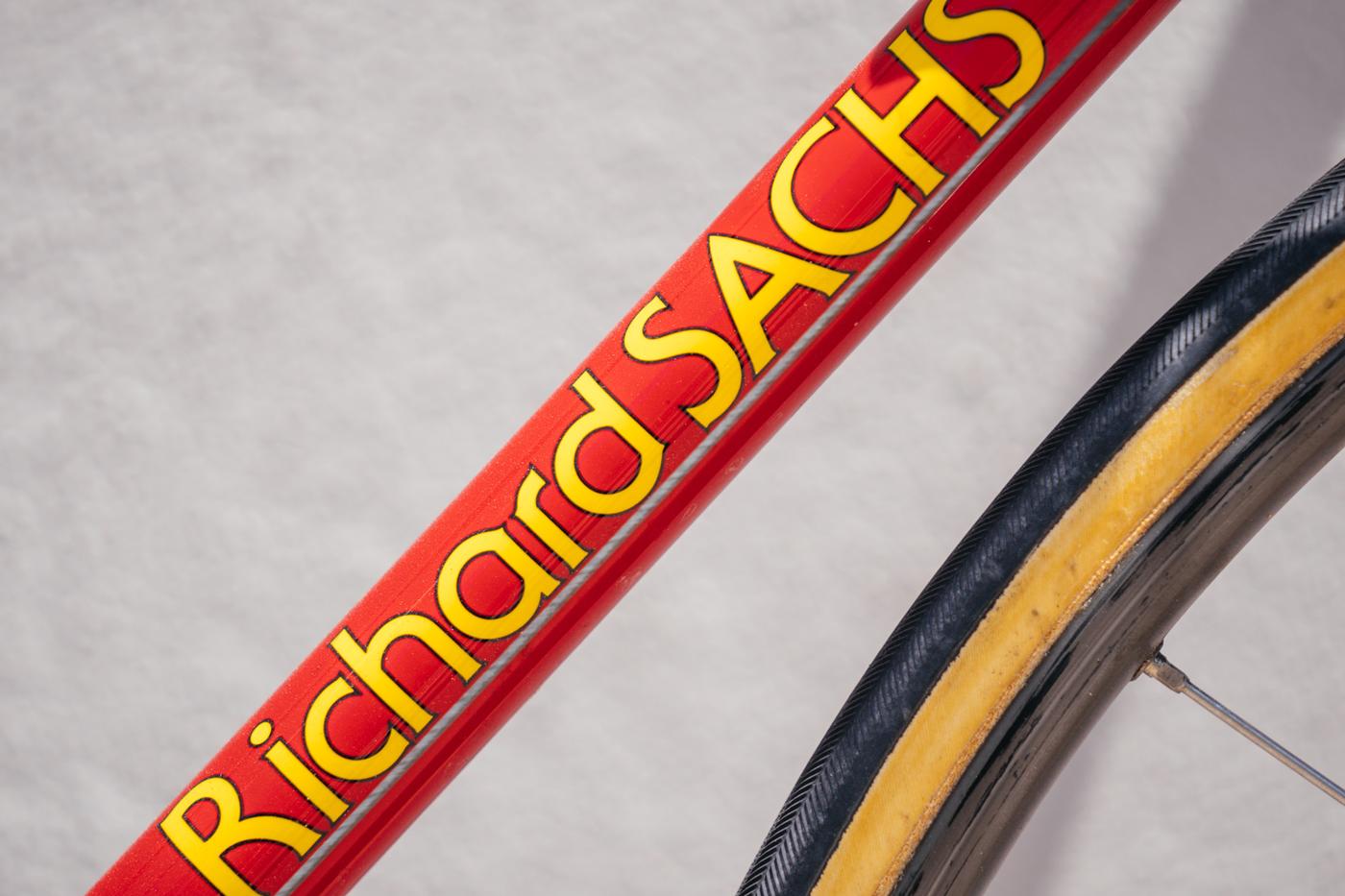 Around the same time this kit was being produced, over here in the United States, Richard Sachs was producing state-of-the-art frames at his shop in Connecticut. He began building under his own moniker, Richard Sachs, in 1975 after being with Witcomb Lightweight Cycles and later Witcomb USA since 1972. By the 1980s, he was working full-time in his shop building custom frames for clients. 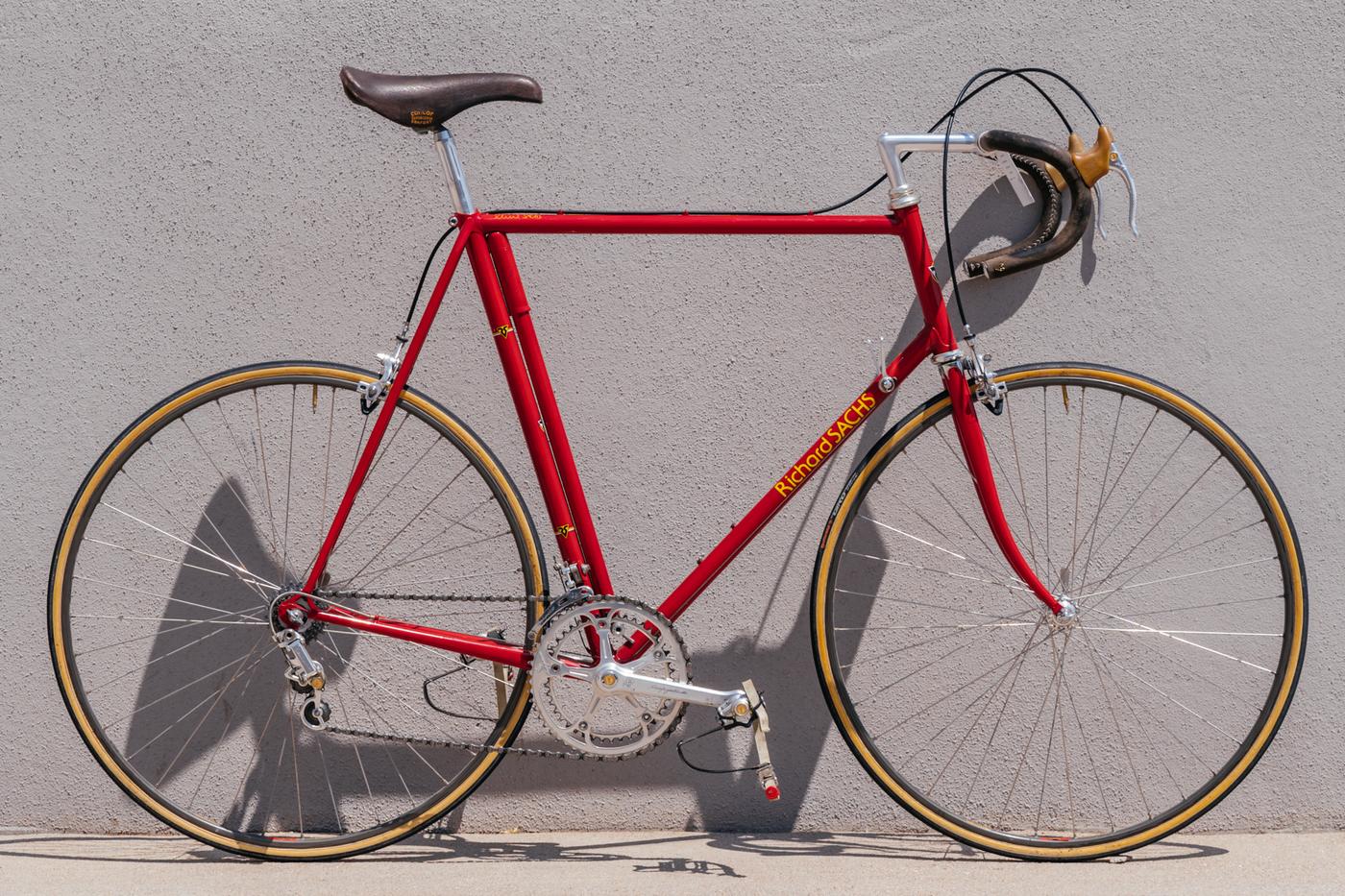 One of which was a customer in Connecticut. Richard built him this road frame using Columbus tubing, Campag hardware, and his own lugs, resulting in a beautiful frame on its own but when you lace it with Campy 50th, the end result is a perfect example of 1980s precision framebuilding and componentry. Nick Martin, the founder of the Pro’s Closet, acquired this bike for his personal collection and as you can see from the Eddy Rando event placard, he enjoys pedaling it frequently. I’ve personally owned and photographed a lot of vintage road bikes but this one takes the cake…

Many thanks to Richard Sachs and Nick Martin for the details on this build. I’d also like to thank the Pro’s Closet for letting me scope out their forthcoming museum! If you’re looking for a bike that’s in-stock and shipping immediately, in lightly used condition, with a 30-day no-questions-asked return policy, then check out the Pro’s Closet’s inventory, like their gravel bikes, which updates daily.