A 1985 Yeti Built and Sold by John Parker

Unless you’ve lived in a cave for the past 30 years you’ve probably heard of Yeti Cycles. Not much has changed in that time. The bikes are still turquoise and still made to go fast. Yeti has always stuck to its foundation in racing, and the alumni roster reads like a list on the wall in the Hall of Fame, with names like Tomac, Furtado and Graves just to name a few. Yeti outlasted most of its competition during those years as their bikes have evolved only enough to ensure they are as fast as their racers. Unlike some bike companies that either don’t embrace their past and culture or don’t have one to really rally around, Yeti is all about their history and more importantly, their tribe. If you’ve been to their HQ or one of their annual Tribe gatherings you’re likely to see some of the more significant bikes from their past. That lineup is soon to be joined by the bike featured here, which is the first Yeti ever sold!!! The story goes a little something like this. John Parker bought out the tooling for 26” BMX “Motocruiser” stalwart Bicycle Bob Wilson and his Sweetheart Cycles brand, and welded up 3-5 bikes. Needing a new name to distinguish his new bike from a Motocruiser, he chose Yeti, named after a sleeping bag he liked. This is the first bike he sold under the Yeti name from the storefront window of Emily K’s bicycle clothing store in Santa Barbara, CA. It was purchased by a young woman who owned it until just a couple years ago when a chance encounter with John at a motorcycle show reunited the bike with its maker. 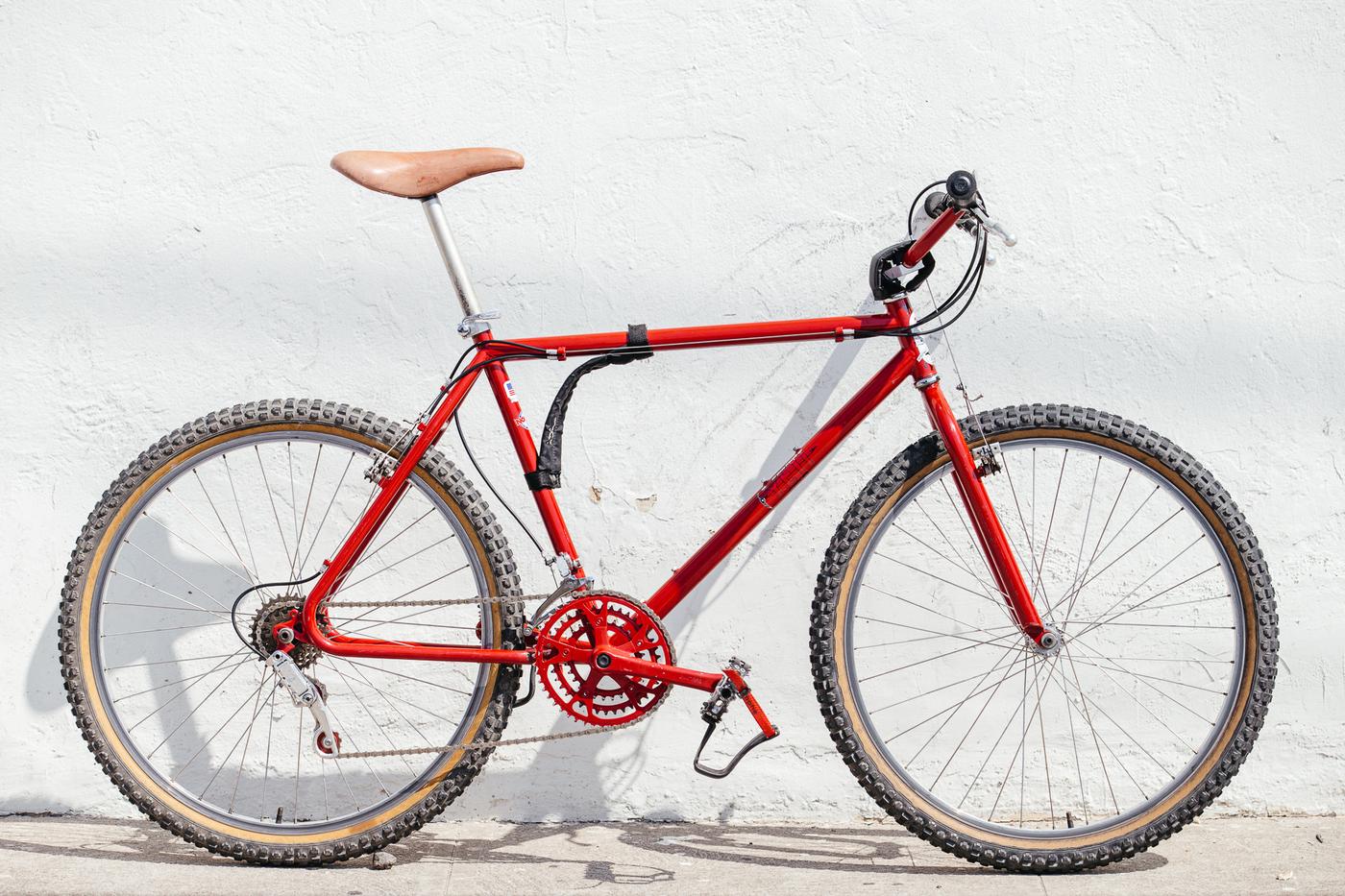 Most mountain bikes in the early 80s came from Marin and evolved from road bike designs. To guys like John, they lacked the durability for serious off road riding and racing. Thus, the early Yeti “mountain bikes” were essentially BMX cruiser bikes with gears and rim brakes. Compared to other bikes of the time they were very maneuverable, very stiff, and very fast. Their stability at speed earned them a strong following among the burgeoning crowd of NORBA mountain bike racers looking to get any edge they could. John Tomac loved the Yeti and raced one under a handshake agreement. 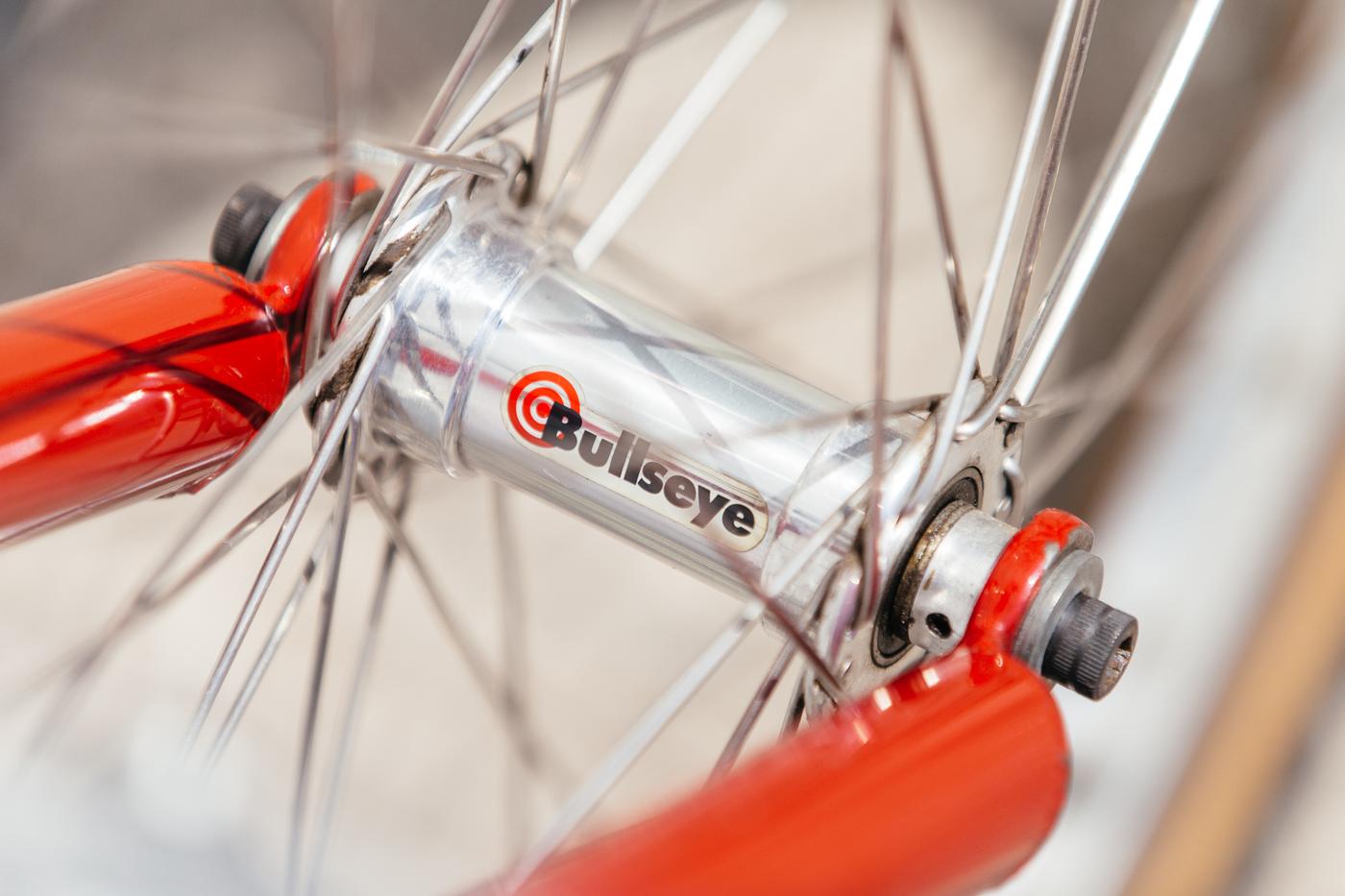 This particular bike is built with a motley crew of components including Bullseye hubs laced to staggered 23/26mm Weinmann box rims with IRC X-1 tires, Campy Triomphe touring front and rear derailleurs, Simplex shifters, Magura brake levers and Weinmann brakes. The handlebar setup was definitely different to the Bullmoose bars and traditional bar/stem combos used by the majority of other manufacturers. The stem is a a Pro Neck and the bars were custom made by Yeti/Sweetheart. Only the first one or two bikes got those bars, and if you search around you can see a photo of factory racer Russell Woorley racing his Yeti with those bars early on in the 86 season. Then there are the cranks, the story goes that John inherited some bad debt from Sweetheart cycles and had a hard time getting parts from suppliers. He somehow got Shimano to loan him those cranks for testing and he decided to powdercoat them red so that they would not ask for them… Now the chain has little red flakes in it, I’m sure that’s fine.

On the dirt the bike feels pretty good as long as you don’t have to shift or brake, ever… Yeah, John didn’t do the bike any favors with the component selection. The combo of shifter and rear derailleur means that the bike refuses to hold low gears and will drop you at the least opportune moment and the idea of a snappy downshift when approaching a climb is a pipe dream at best. Most people will shrug when you tell them that cantis are weak, but in actuality a good set of cantis can work really well. These are not those brakes. Slowing down is a matter of wishful thinking and you always have to have a plan B in mind. B as in, bail.

There is no denying the fact this is a special bike that really captures a period of time when mountain bikes were just grabbing a foothold and builders were trying lots of new things and really swimming in uncharted waters.