The longest mountain bike trail in the world: OROGENESIS. It’s an idea now, but with your help we’re going to make it real. Ever since the early days of the Repack riders, mountain bikers have dreamed about a trail that spans the mountain ranges of the North American continent. Now, 40 years later, we’re building it. In 2016, the instantly popular Baja Divide bikepacking route landed on maps and, shortly afterward, the Oregon Timber Trail appeared as well. It was obvious that we needed to connect the two. Five years and five thousand miles later, here we are. A new way on old ground.

“Orogenesis” is the geologic process of mountain building, and tackling the development of a mountain bike route on the scale of Orogenesis is an overwhelming undertaking. We understood this limitation early on and created the Orogenesis Collective—a loose conglomeration of ultra athletes, trail builders, event promoters, bikepackers, and ghost trail whisperers up and down the west coast. Their knowledge, ambition, and nose for sniffing out overgrown singletrack is what has enabled us to develop a more or less uninterrupted line for 5,000 miles along the western lip of the North American Tectonic Plate. That being said, it’s hard to not focus on the few interruptions in this line: when you hit wilderness boundaries, a rocky chasm, a private gate, or a roaring river and are begrudgingly forced to retreat onto unexpected miles of pavement. Over the past several years the Orogenesis Collective has attempted to refine the many alignment iterations that have been suggested and scouted, and turn them into our preferred alignment. We found about 206 miles of ‘gaps’ along this alignment where we’ve deemed there to be no current suitable option for riders. That may seem like a lot, but it’s less than 5% of the entire route—all of a sudden we realized just how close to blooming this entire tendril of trail was. The seed has germinated. Could we fast-track it for a soft launch in 2023? That brings us to now. Rolling back dusted onto the tarmac and surrounded by the buzz of people with everywhere to be. Exhausted, sore in all the right places, mosquito-bitten, and a huge grin knowing the Orogenesis Collective just wrapped up our first ever Stewardship Campout. Seventeen volunteers from three states converged a mile above sea level in the southern shadow of Washington’s Mount Rainier to work on one of the most complex gaps along the entire Orogenesis alignment. We staged at Jackpot Lake with two objectives: 1) begin restoring the ancient Klickitat Sisters Trail, and 2) scout an old trail to a fire lookout that disappeared from maps in the 1960s. We were just outside of the gateway community of Packwood, Washington focusing on the Colemonti Trail’s Loowit Chapter. The Loowit Chapter is roughly 140 miles long stretching from the Columbia River Gorge to Packwood. Riders travel north over Monte Carlo and Monte Cristo, through Trout Lake and Indian Heaven before linking to the Lewis River Trail. They then continue onward into the depths of the Dark Divide, Juniper Ridge and Tongue Mountain, and climb again, up to the Klickitat Sisters Trail where maintenance is severely lacking, and instead of a singletrack descent into Packwood, they are forced to coast down 4,000’ on gravel roads. Our vision is to bring the Klickitat Sisters trail back into a usable state, and turn that massive descent into a ripping ridgeline cruise with dangerously distracting views of Mount Rainier. Last fall I joined Remy Auccoin from Trans-Cascadia and the Packwood Trails Project to scout the lower portion of this ridgeline descent. Several of our previous scouting trips on nearby ridgelines had led to frustrating dead ends, and we were very dubious that South Point would be any more fruitful. The 1930’s era topo maps that I usually lean on to reveal their secrets were blank along this ridge, then a vague dotted line only appeared on a few county maps in the 40s and 50s, and again nothing after 1960. Hundreds of fire lookouts were built throughout the Pacific Northwest in the first half of the 20th century, and then as fire detection methods evolved, nearly all of them were decommissioned and burned down.

Many lookouts had two access trails: the well-graded option for hauling in supplies by mule train, and the “Oh @#$%!!!” option for racing down the mountain when a fire was detected. I think you can deduce which one is the most fun on a bike—and which one we were on the hunt for. 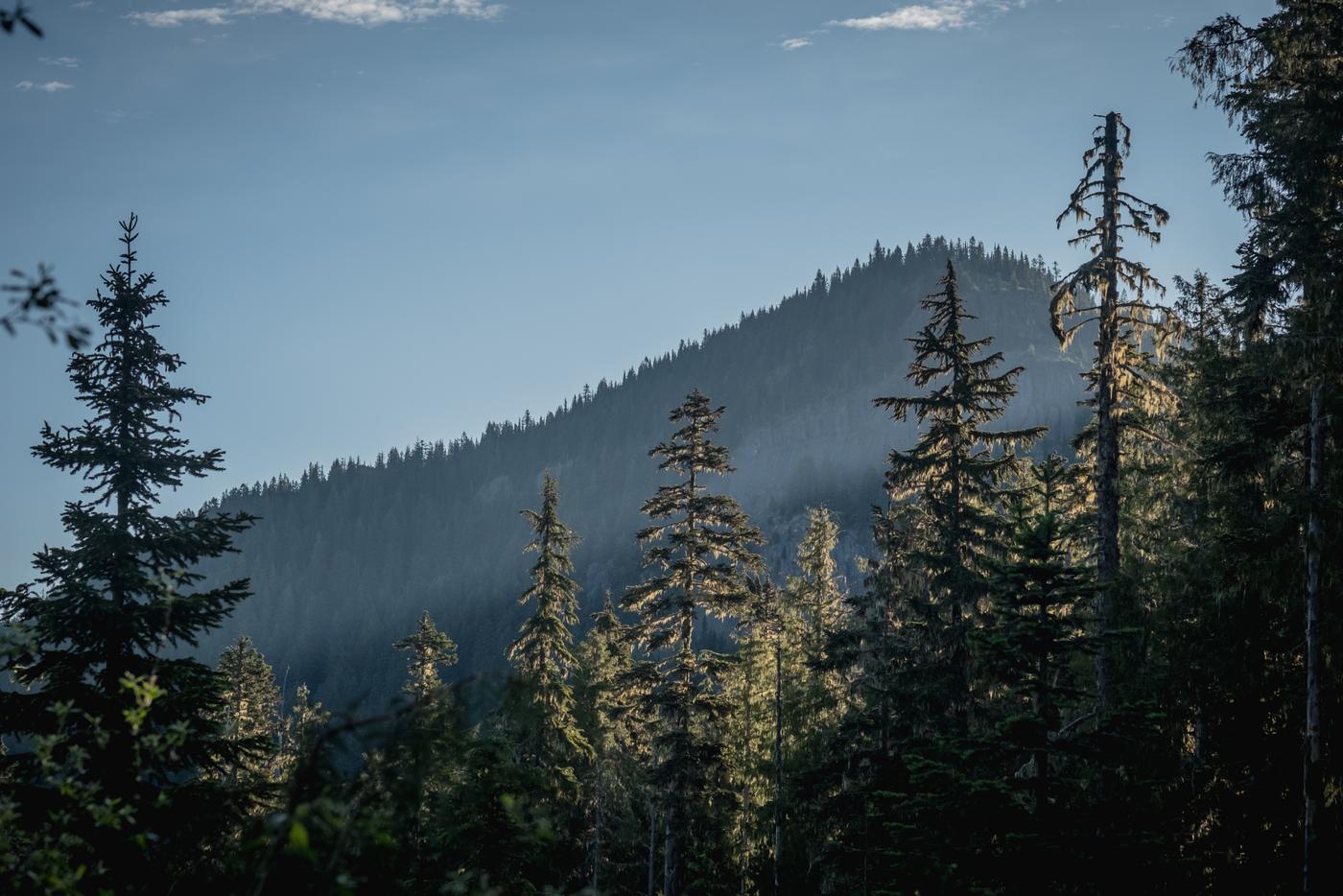 After shimmying across a swollen creek on a log and 20 minutes of scrambling up a steep ravine on a slimy layer of leaves we were becoming even less optimistic, and then right in front of us as we tried to catch our breath, was a perfectly benched switchback covered in moss, most likely untouched for the last 60 years. Ka-ching! The treasure hunt had finally paid off. We continued to find traces, turns, and blazed trees as we ascended the ridgeline where the wet leaves transitioned to winter’s first dusting of snow—and farther up, all the way to South Point’s summit: 5,000 feet above where we started. A week later it was all under three feet of drifting snow. 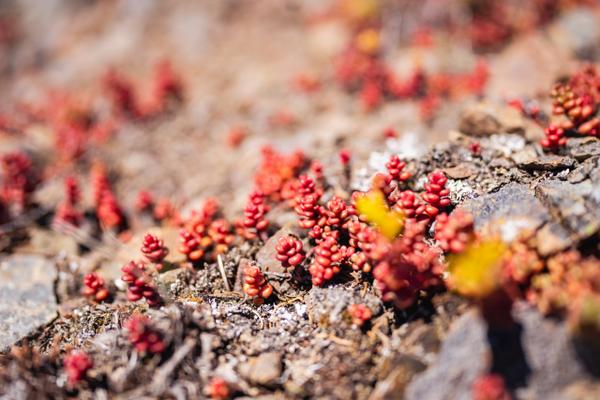 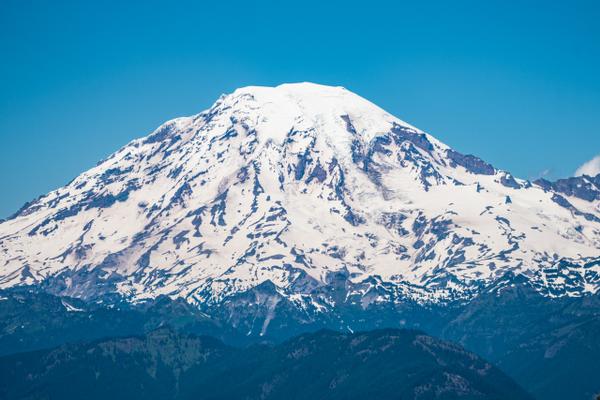 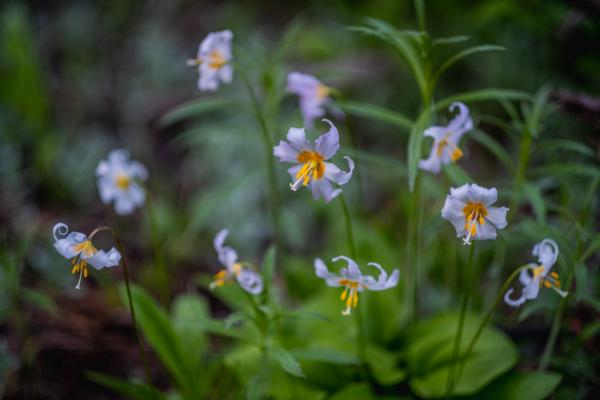 And now, after a whole season of suspense, we stood in camp looking up at the other end of the ridgeline with coffee in hand. This was the final piece of the puzzle. As we dove into the underbrush, an old hunter’s camp revealed itself almost immediately, and then a string of blazes led upwards towards the first of several saddles. Sure enough, this end was eager to show us its secrets as well. An obvious, albeit steep, trail led us past trees peeled by the local black bear population and along a scrappy ridgeline that showcased view after view of Cascade volcanoes: Rainier, Adams, and St Helens. And then suddenly, we came to a halt at the bottom of a cliff with no obvious path around. It was late in the day and a long three-hour bushwhack back to camp so the final 2.5 miles would have to wait until another scouting trip. But as faint as this historic trail is today, we know that it must connect to the summit somehow. Nobody would spend that much effort building a dead-end trail to nowhere. Long before the era of fire lookouts, for at least the last 2,000 years the Klickitat people lived (and still do) near the mouth of the Klickitat River (present day Lyle, WA) and the Klickitat Sisters trail connected them to the tribes of the Cowlitz Valley via the river’s headwaters and a series of high elevation ridgelines. The Klickitat’s self-designation is xwa’lwaypam, or Stellar’s Jay People. (Klickitat is a misnomer from the Lewis and Clark expedition.) As our first morning of work began we grabbed rogue hoes, chainsaws, and an eclectic variety of hand tools and walked into the forest, finding it hard to ignore our reverence for its history and steep, inhospitable terrain. Although it was a hot day in mid-July we soon found ourselves postholing through lingering snowfields on our way to the Cispus Lookout. The trail was in rougher shape than we had hoped—old twisted Mountain Hemlocks had not only fallen across the trail, sometimes partially suspended and intertwined, but some had also lain long enough to begin their decomposition process, slowly returning to the damp needles and duff from which they were born so many hundreds of years prior as the xwa’lwaypam people harvested huckleberries in the meadows around them. By the weekend’s close we had accomplished clearing about 7.5 miles of the Klickitat Sisters Trail and logging 300 volunteer hours. It’s just a scratch on the surface of what’s needed, but perhaps now this 2,000 year old indigenous path will last a couple more years and be used by future generations—whether on mountain bikes, with huckleberry baskets, or some not-yet comprehended form of travel, sustenance, or entertainment.

A new way on old ground. 🙌  This volunteer event was only made possible with support from GOREWEAR. GOREWEAR’s support provided our volunteers with coffee, beer, soda, safety gear, tools, and a selection of outerwear. Their Fernflow pants were a crowd favorite for working and riding.
🎥  Special thanks to Chris San Agustin from Broken & Coastal for shooting photos and video of the event.
👷  We also couldn’t do this without the incredible support from our volunteers! Thanks to everyone who made the trek, worked hard, and told ridiculous tales around the campfire. The Orogenesis Collective would also like to thank the members of the Upper Cowlitz Valley Trails Coalition: the Evergreen Mountain Bike Alliance, Packwood Trails Project, Washington Trails Alliance, and the Backcountry Horsemen for their dedication to backcountry trails in the Gifford Pinchot National Forest.
✍️  This was the first of many stewardship opportunities, to learn more and stay informed, sign up here.
🕵️‍♀️  Follow the Orogenesis Collective on Instagram or join our Facebook Group.