These days, most mountain bike companies have some sort of drop-bar bike in their lineup and, here at The Radavist, we’ve collectively had the opportunity to ride a lot of them. I feel like the impetus for mountain bike brands to develop a drop-bar bike is in direct response to the increasing customer demand for gravel bikes.

When I first saw the prototype Rover, I was intrigued because Revel doesn’t put out shit bikes; but, not being much of a carbon fiber guy, I wasn’t immediately drawn to it. Large-diameter tubing profiles and beefy forks usually imply a chattery, harsh, and stiff ride quality. After riding the Rover on my local digs, though, I was pleasantly surprised. While it’s not without its flaws, the Rover ended up proving my own stereotypes of carbon wrong. Let’s take a closer look below… 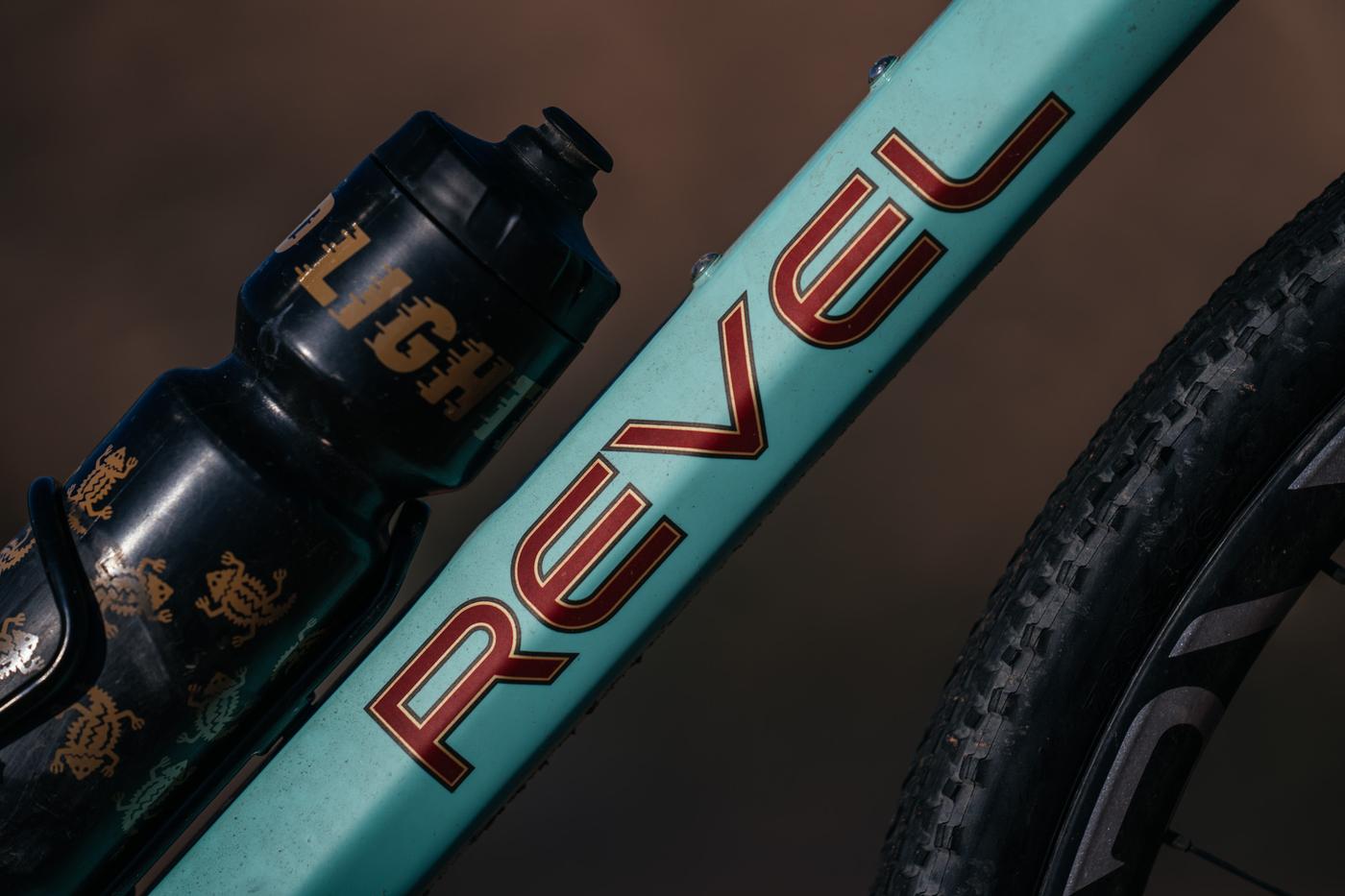 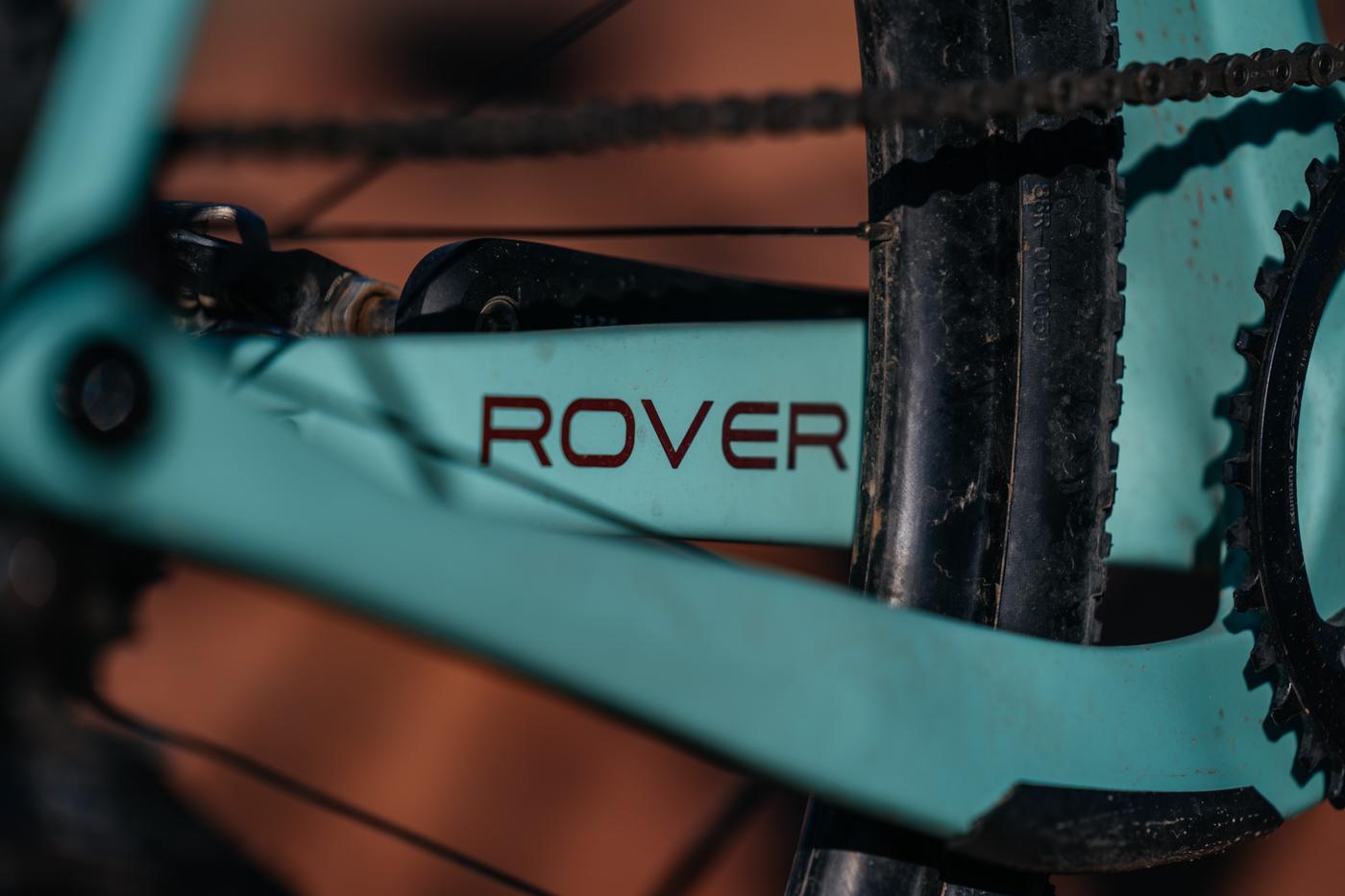 While carbon bikes might not be my forté, I have reviewed several “gravel bikes” from mountain bike companies over the years. Off the top of my head, the modern Ibis Hakka and the Santa Cruz Stigmata come to mind and are probably the most relevant to this review. These brands were early adopters of adding a drop-bar bike to their extensive flat bar catalog. There’s also the Evil Chamois Hagar which is an achievement on its own but, categorically, is very different.

Yet, it’s important to remember that both Ibis and Santa Cruz had vintage drop-bar bike offerings in the past. Ibis had its Hakkalugi, and Santa Cruz had the Stigmata. Not to mention, Ibis developed the “LD stem” to put drop bars on its 26″ mountain bike models back in the 90s. Neat.

Revel differs because they are a relatively young company compared to Ibis and Santa Cruz, so while they might not be taking inspiration from their previous catalog offerings, they’re clearly addressing customer demand. 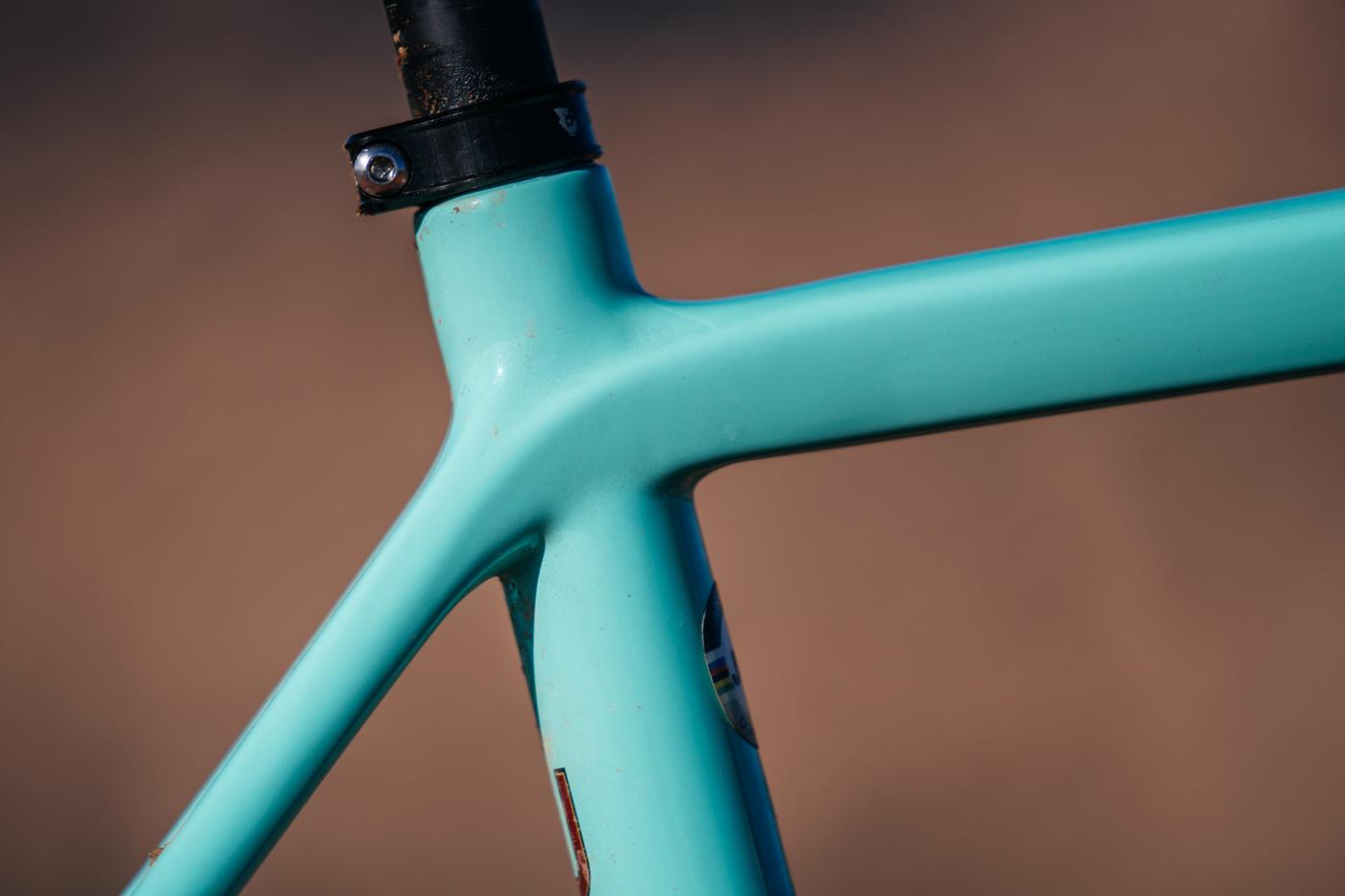 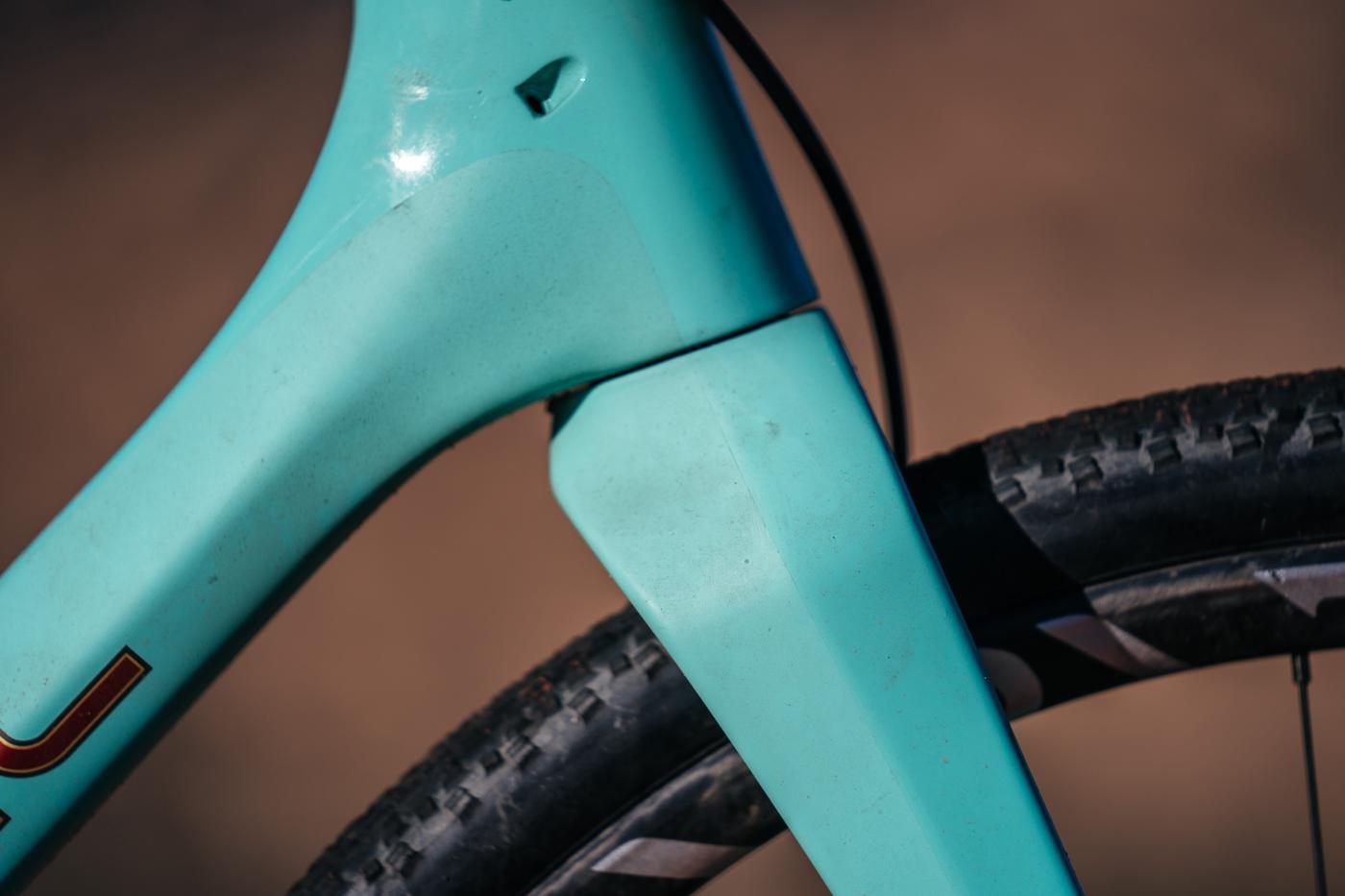 It’s All About the Engineering, Baby

While carbon might not be my material of choice for bikes, I enjoy riding these bikes for reviews as they offer a completely different ride quality than I’m used to. When carbon fiber bikes are engineered correctly, ATMO, they too can flex quite well, absorbing some of the harshest terrain.

This applies to the Rover, which is actually one of the more cushy carbon experiences I’ve had.

When I reached out to Chris Reichel, the “Director of Stoke” for Revel, with praise over the Rover’s ride quality, he quickly acknowledged the engineering team’s accomplishments. Whereas a lot of brands want the lightest and stiffest chassis for their carbon gravel bikes, Revel acknowledged that a smoother ride will ultimately make for a more enjoyable experience overall.

Now, I’m not an engineer, nor do I really care about frame engineering at a more than anecdotal capacity, but I appreciate this approach in bike design. I don’t race, nor do I care about “stiff” bikes, as I’m sure most of you feel the same, but I will commend the amount of R&D that went into this bike. 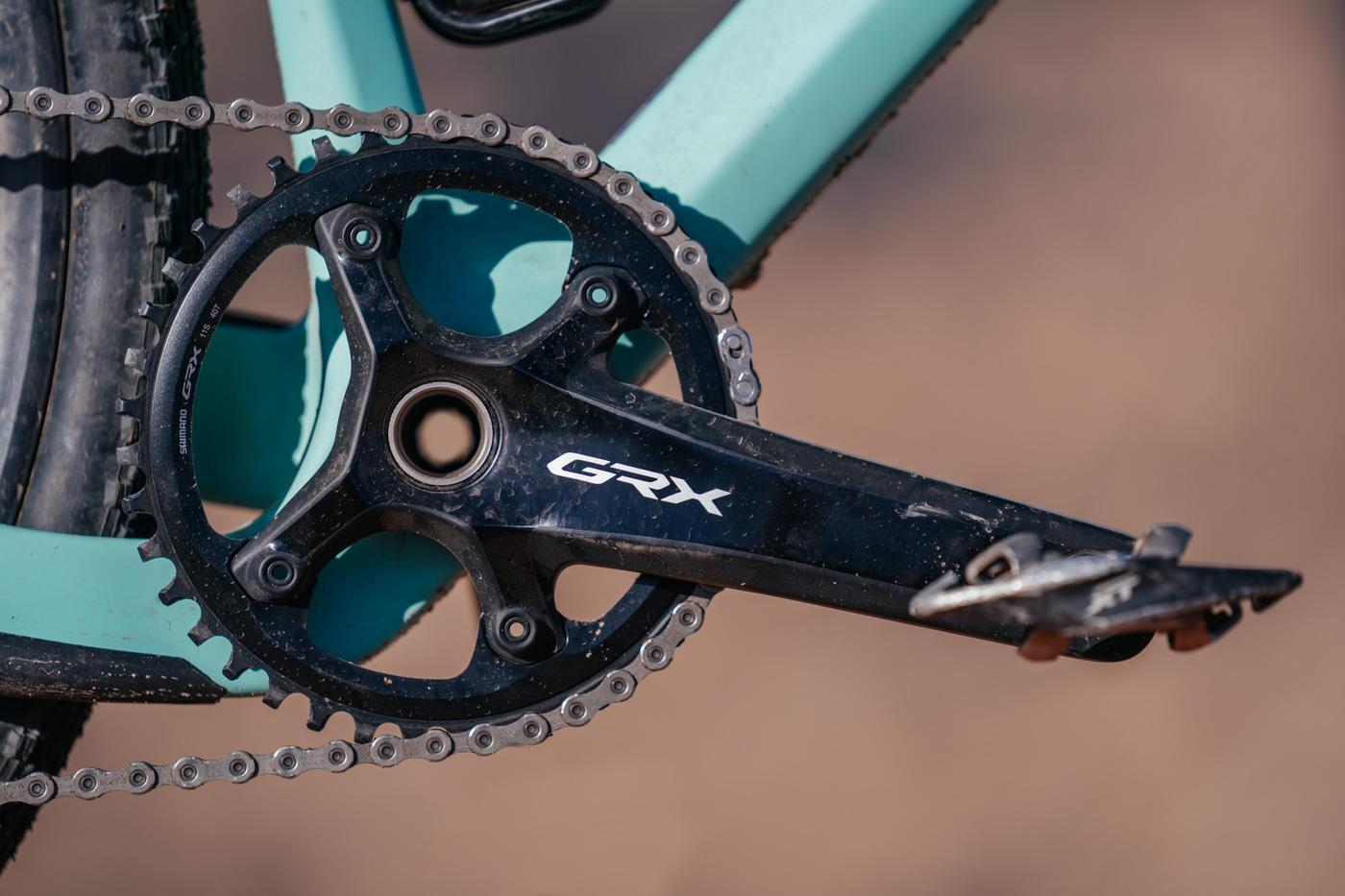 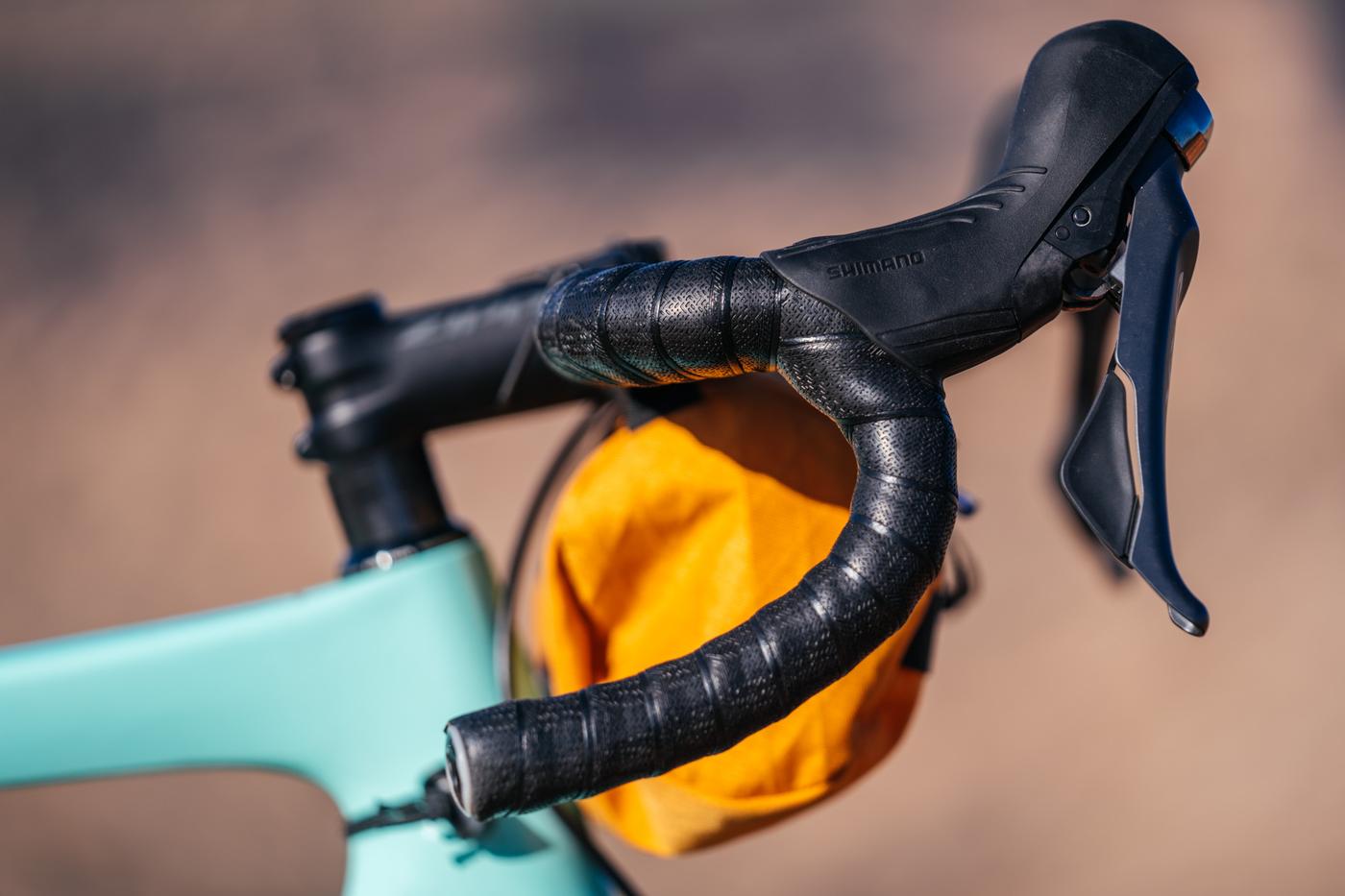 Speccing a gravel bike isn’t rocket science nowadays. With a number of offerings from Shimano and SRAM specifically designed to accommodate gravel bikes, you literally can’t go wrong. Even with supply chain shortages, Revel was able to build the Rover’s carbon chassis on the reliable Shimano GRX platform, which offers a wide-range 1x drivetrain, with a road Q-factor, and the crisp-shifting you’ve come to love from Shimano. If you’d like to read more on my thoughts on GRX, check out this one from the archives.

As for the rest of the parts, such as the contact points, Revel stuck to the tried and true path, building the Rover out with a Zipp cockpit and a Revel Seatpost. The shining beacon of the build, however, are the wheels! 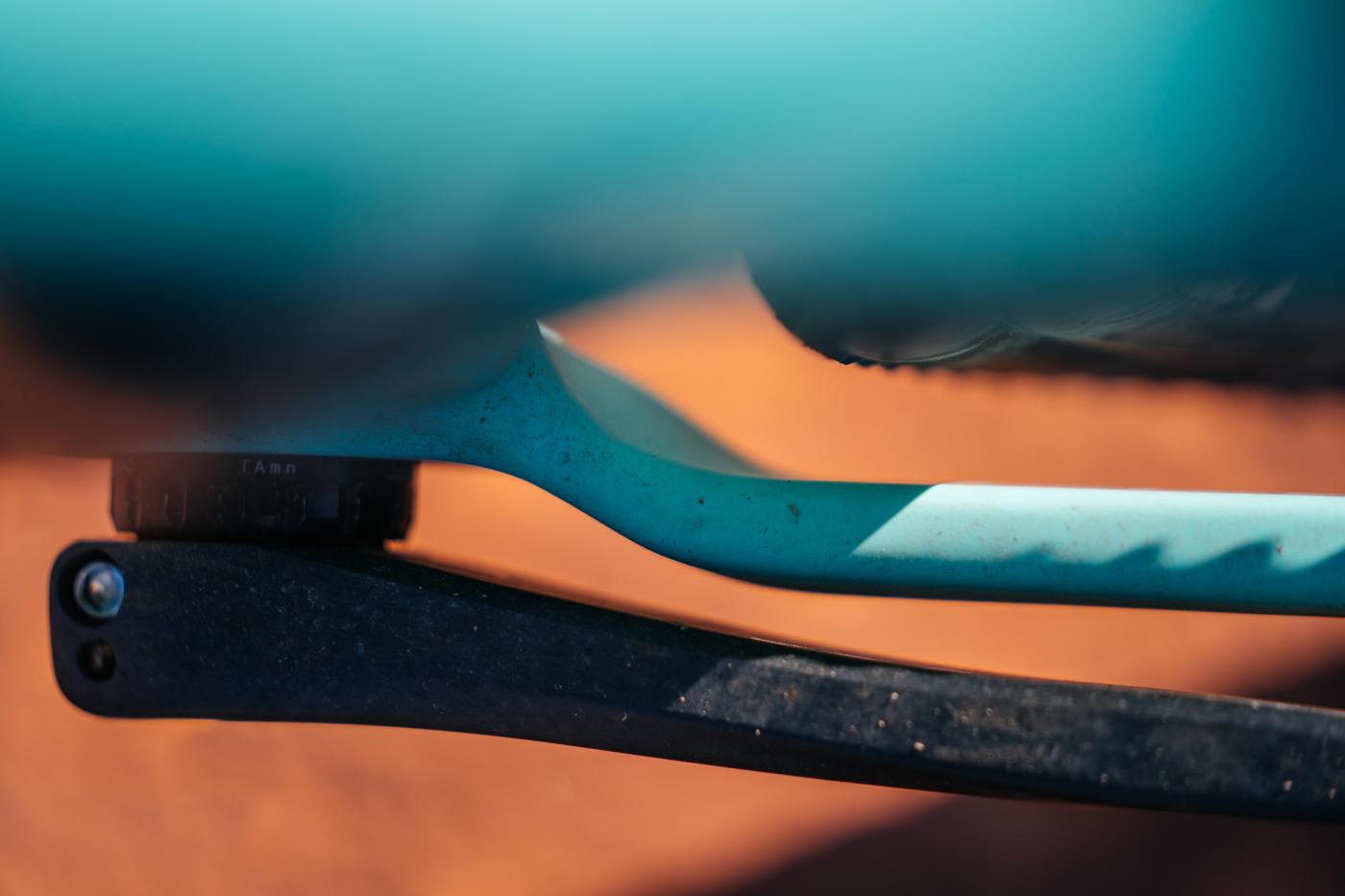 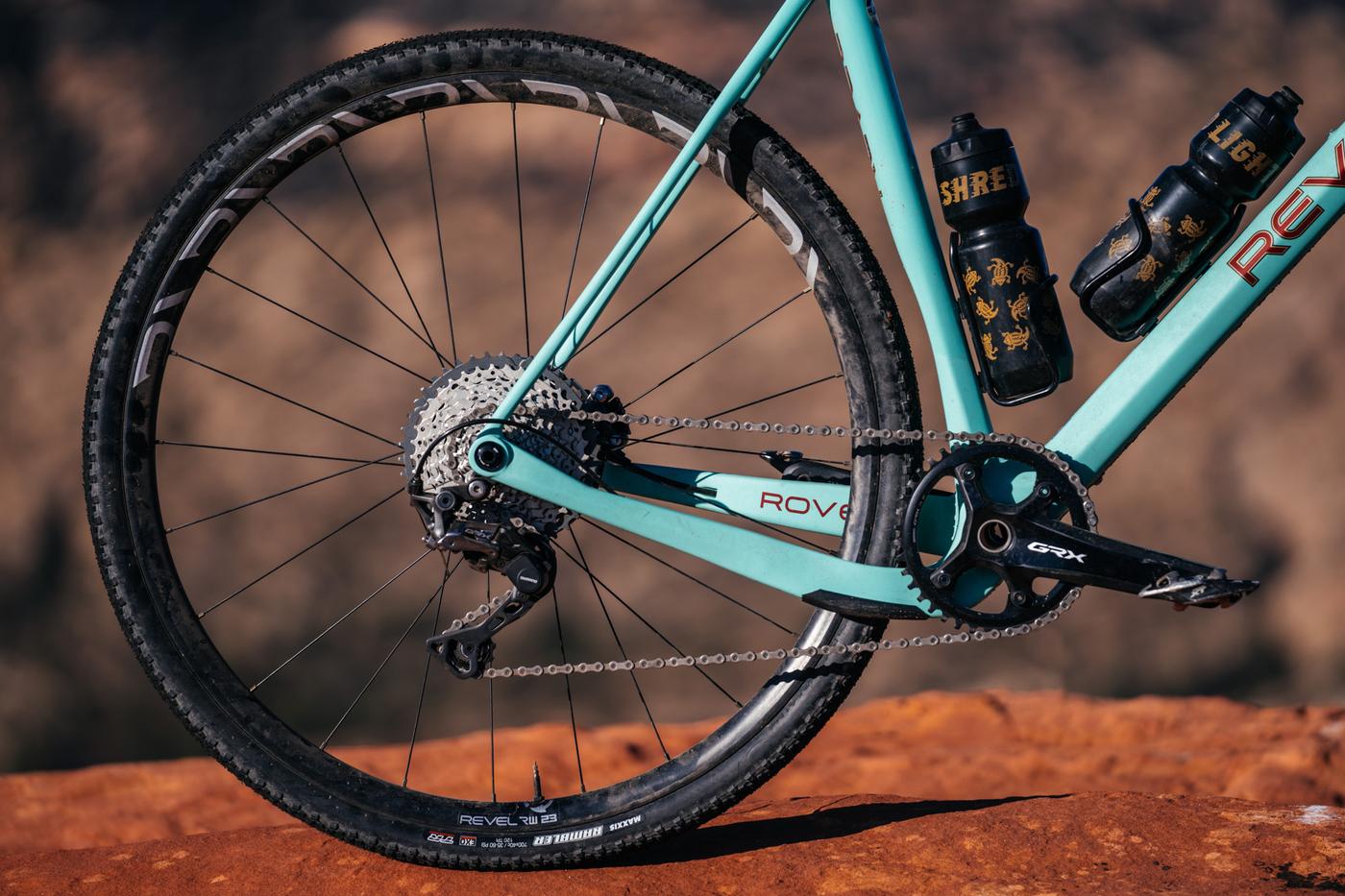 Fusion Fiber, what is it? How does it work? Why do we need this new tech? These Revel wheels are made by CSS Composites, who developed a carbon fiber matrix that not only rides quite well but if something should happen to your wheels, are completely recyclable. Other carbon fiber products are simply buried in landfills, so this is an important step in developing sustainable products. Did I mention they’re US-made too? You know I’m a fan of that!

What’s really nice about these wheels is they, like the Rover frame, offer a nice, flexy ride quality, akin to a spring if you will. Hard-edge impacts are reduced, washboard roads are absorbed, and out of saddle efforts begin to feel a lot smoother. I’ve been riding these wheels on another bike as well and am working on an in-depth review. The Revel Wheels are an optional add-on across all three build kit pricing tiers. 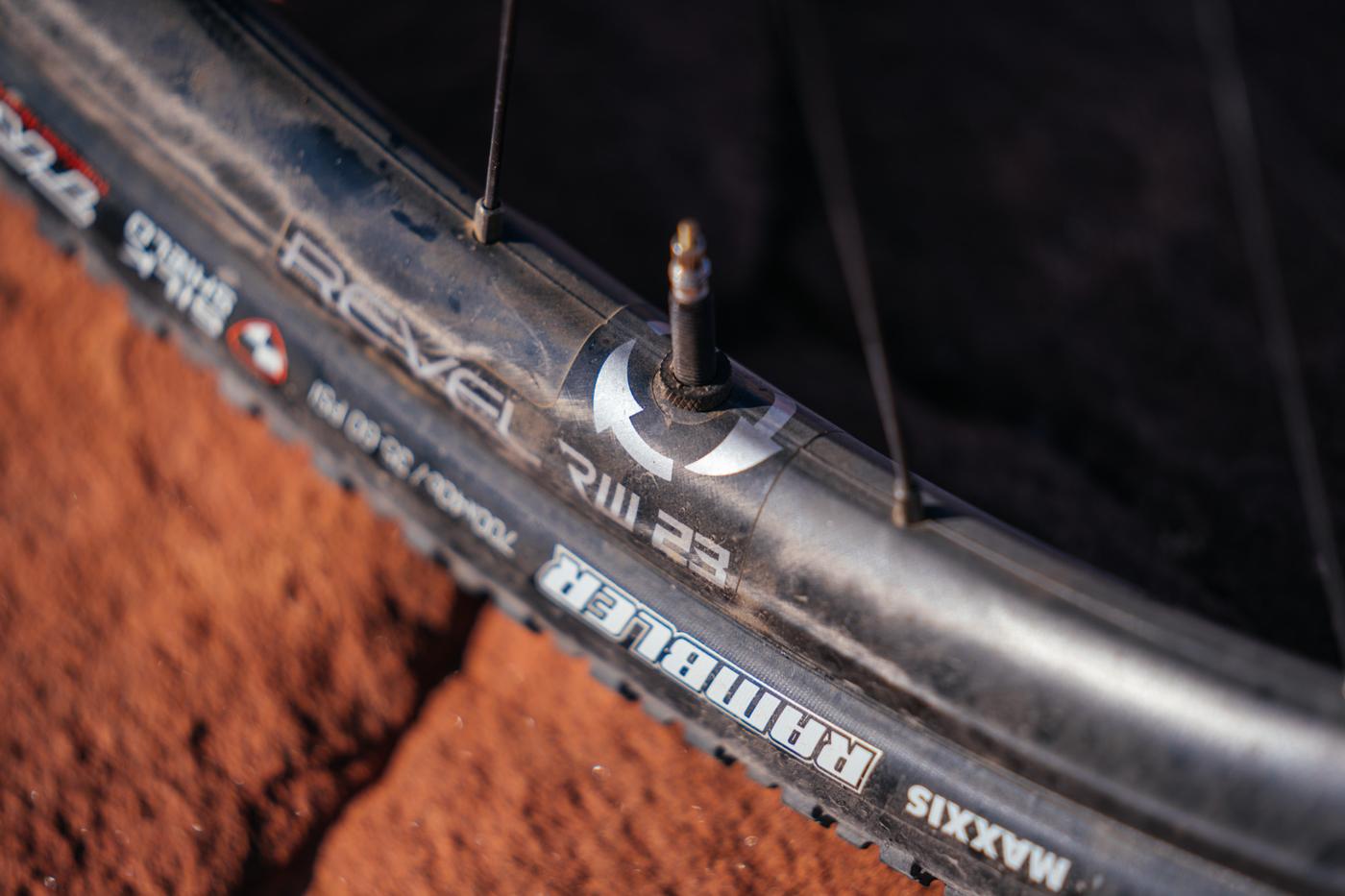 If you’d like to know more about Fusion Fiber, check out Revel’s offerings and read more about the tech at CSS Composites.

When shopping for a gravel bike, many people look to the geometry chart for comparison. These numbers are fairly close to the Stigmata and Hakka, with a slightly steeper seat tube angle, a slightly slacker head tube, but a consistent 70mm bottom bracket drop. There’s nothing new or groundbreaking, but the proof is in the carbon layup puddin’. Perhaps you recall one of the latest Beautiful Builds videos where I explain the difference between a steel fork and a carbon fork? Yeah, that one. Anyway, as I previously mentioned, carbon forks are typically super stiff, sending reverberations up through the cockpit and into your wrists. The cycling industry has tried to counter this effect by offering both passive and active suspension in polymer/elastomer forks, suspension forks, suspension stems, and more. All the while knowing that carbon doesn’t have to be stiff at all.

The Rover is the first carbon chassis I’ve ridden that feels smooth and doesn’t leave me fatigued after rough and rugged roads. This has a lot to do with the fork itself, which flexes a whole lot considering its robust appearance. Even with the 40mm Maxxis Rambler tires, pumped up to 25-30psi, there is a noticeable ride quality happening. For instance, you can watch the front fork flex on washboard descents and feel the bottom bracket sway ever-so-slightly on steep climbs.

For an 18lb complete, as pictured here, the Rover is both light on its wheels, and comfortable during long rides. 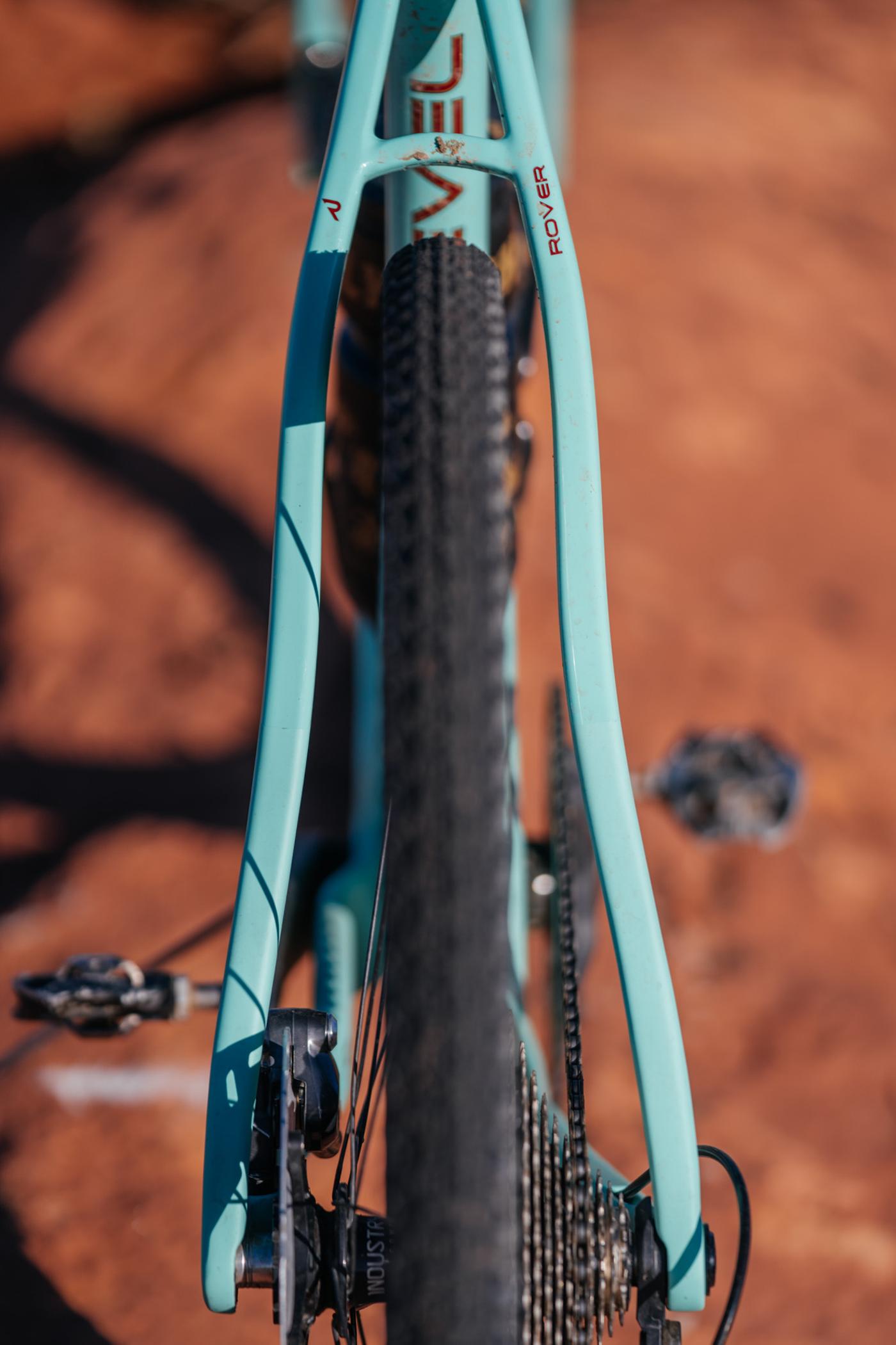 Modern bikes are hard to dissect or deconstruct in order to find their weaknesses and to be honest, I didn’t encounter a single flaw in the ride quality, design, looks, or weight of the Rover. My qualms arise more in the versatility of the bike’s accouterments. Look, for some reason people love to tour and bikepack on gravel bikes, which I can understand but I will point out that a rigid MTB still remains my preferred method of touring-minded travel. Still, I was a bit surprised to see a lack of cargo bosses on the Rover’s fork or any additional bosses in general. If you wanted to run fenders on this bike, you’re stuck installing those finicky strap-on fenders, rather than having a more robust, bolt-on option.

I get it, too. Brands like the clean aesthetic of a carbon gravel bike, but consumers have asked for cargo bosses and fender mounts as the bare minimum for “versatility” sake. 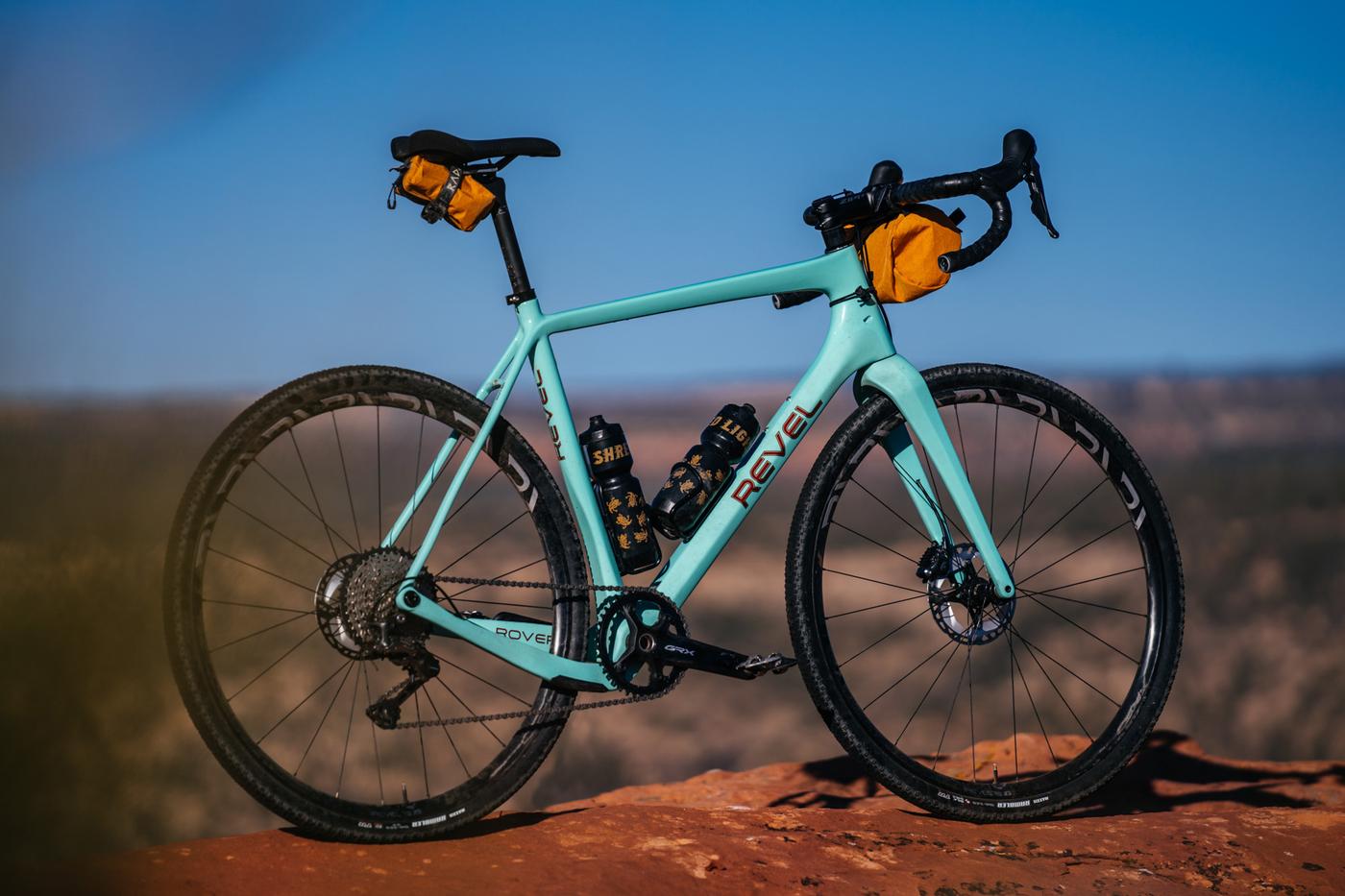 In a sea of carbon fiber gravel bikes, it’s hard to differentiate your offerings from your competitor’s but Revel has done something special with the Rover, offering a compliant ride quality, a flashy turquoise paint offering (there’s a black frame option too!), recyclable US-made carbon fiber wheels, three build kit tiers, and a lightweight chassis. The Rover might not be an industry first or even anything astonishing, but it rides incredibly well just like the brand’s mountain bikes. While there are no cargo bosses or rack mounts, I wouldn’t discredit the Rover or its off-road prowess.

See more at Revel Bikes. Also, on a related note, if you ordered a Rover when they were released, they’re shipping this week!