Is it one’s riding that evolves first? Or is it the bike that is the catalyst for evolution? Bicycle design, much like one’s riding style, evolves over time, triggered by a series of environmental or equipment changes. Perhaps your everyday singletrack just gets tiresome and you’re looking for a way to change it up, or maybe your road bike gathers dust during ‘cross season. At some point, riders look for excuses to shake things up, as a break from the painful monotony of riding bikes by the rules and luckily for us, the offerings from companies follow suit, evolving their lineup in the same sequence.

A number of brands have taken a look at their ‘cross bikes and asked what the next step in evolution would be, or perhaps, what it should be. What seems like ages ago, we were all riding singletrack and fire roads on 32mm tires, burnin’ brake pads as our cantilever or v-brakes smoked our sidewalls. Then came disc brakes, which offered more control, options for larger tires and other benefits. All the while, frame builders were experimenting with multiple wheel size options, brought along by the popularity of disc brakes. Soon 27.5″ (650b) wheels began popping up on drop bar ‘cross bikes, yet these weren’t really “cross” bikes anymore. They had evolved past that.

Ibis recently took a long hard look at their classic ‘cross frame, the Hakkalügi. These frames started out as steel, cantilever bikes, marked by classic Ibis stylings and most notably, the Mike Cherney fabricated “hand job” cable hanger. Like Ibis’ mountain bikes, once carbon fiber became the preferred material, the Hakkalügi went through the motions, too. Carbon canti, then carbon disc but the whole time, these bikes stayed true to classic ‘cross frame tire clearances and geometries, always feeling like outliers in the brand’s catalog. Ibis knew it was time for a change.

The Hakka MX is the next step in the evolution of the Hakkalügi. Constructed using the same standards as Ibis’ mountain framesets, the Hakka MX is a lightweight, monocoque frame, built around wheel size options and has a very high degree of shredability. Thanks to the newly designed chainstays, the Hakka MX has clearance for a 45mm tire on a 700c, or a 2.1″ on a 27.5″, depending on tire tread. It’s also dropper-post compatible, utilizes a T47 bottom bracket, is Di2 compatible, has a 142mm thru-axle rear, and integrated fender mounts on the rear triangle. The Hakka MX uses a 1.5″ tapered head tube, with the ENVE ‘cross fork, which has enough clearance to pack in some thick rubber and is designed to take a beating on the race course, singletrack, or on a bikepacking trip. All this, with a 7-year warranty. 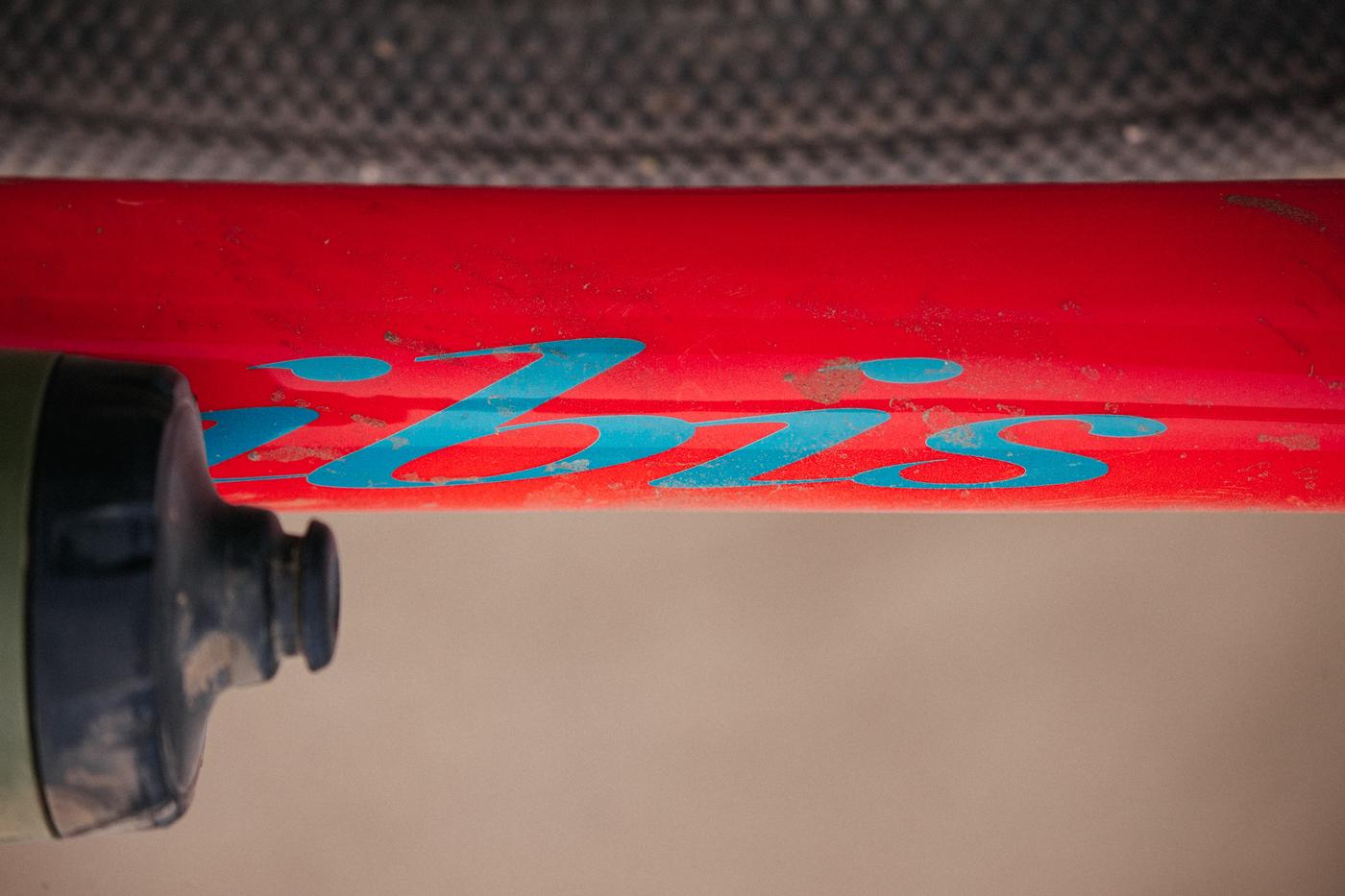 Is it “cross,” “road” “all-road,” “groad,” or is it a “gravel bike?” Call it whatever you like, the Hakka MX can be all that and more. Ride it with a road wheelset to your ‘cross race, swap wheels and race. Or take it bikepacking. You can even use it as a disc road bike. There’s nothing stopping a Hakka MX owner from changing it up to keep things interesting.

Yet, geometry is entirely subjective. My observation with modern disc brake-equipped, drop bar bikes is they take one of two lineage splits: classic ‘cross geometry, or classic road. There are permutations, naturally, but many companies use these basic points as a starting ground and go from there. When you look at the numbers, it appears Ibis blended the two typologies, resulting in a bike that has reliable control, yet is snappy where it needs to be. The chainstays measure 430mm, with a 70mm bottom bracket drop and a 72º head tube angle in the size 58cm that I rode. A lot of bikes float around this general area, which ultimately means we’ve finally begun to figure out what makes a bike a true “Swiss Army Knife.” As for fit, the Ibis’ stack is on-par with other production size 58cm frames I’ve ridden. 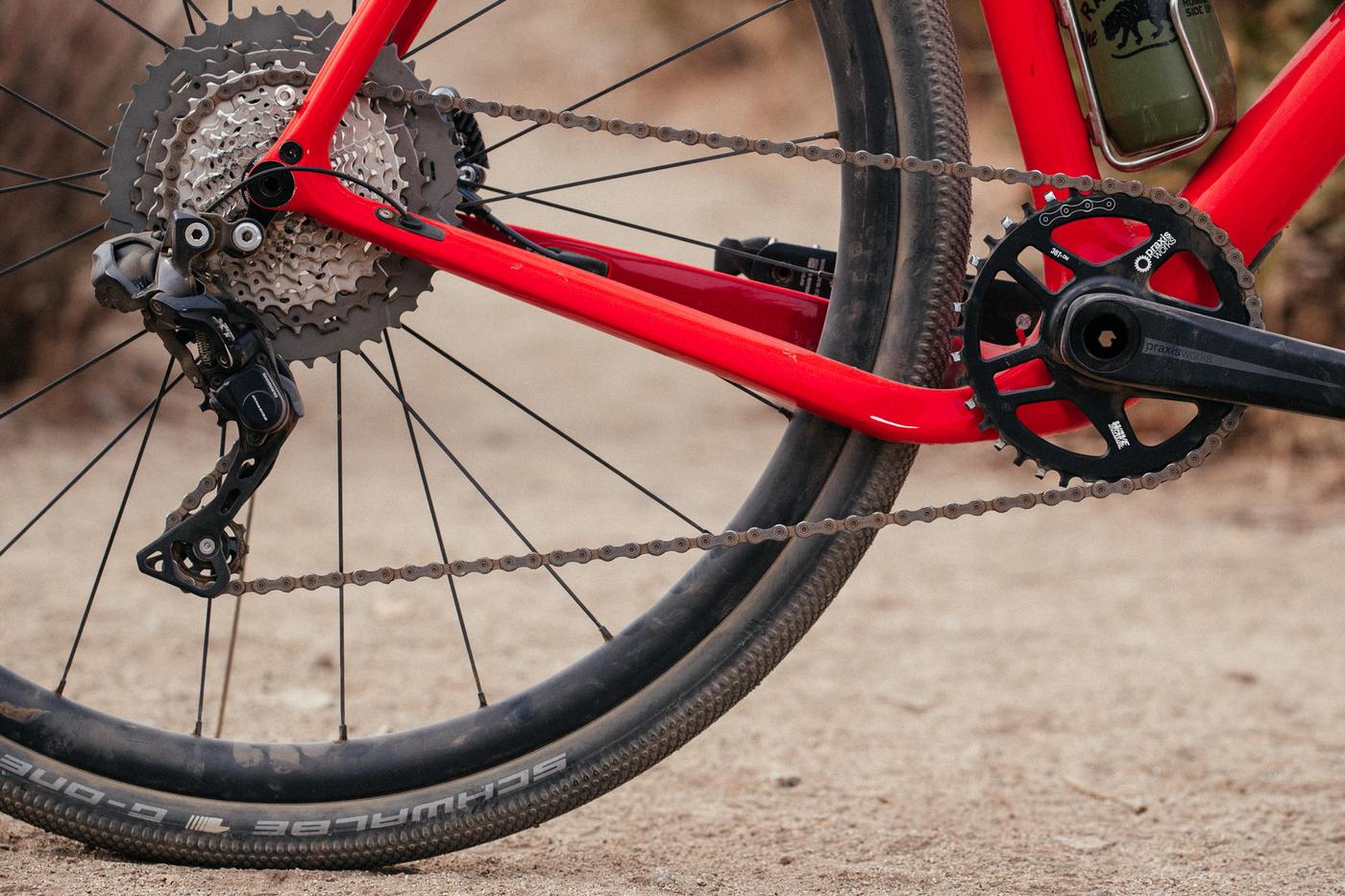 In my opinion, the Hakka MX, unlike the other Hakkalügi frames, looks like it belongs in the Ibis family, not that it just had to be there. Integration into the lineup comes from the frame’s body language. With a shaped, dropped chainstay, a sculpted bottom bracket cluster, smooth lines at the head tube, a seat cluster with style and the lean, clean dropouts, the Hakka MX has pulled the best parts from the Ibis catalog, sans linkage or suspension design. The internal routing is clean, especially when the frame is equipped with Di2. The entire package is tight, with all the i’s dotted and t’s crossed. It comes in either this bright, modern “Fireball” red or blackened out in “Coal.” 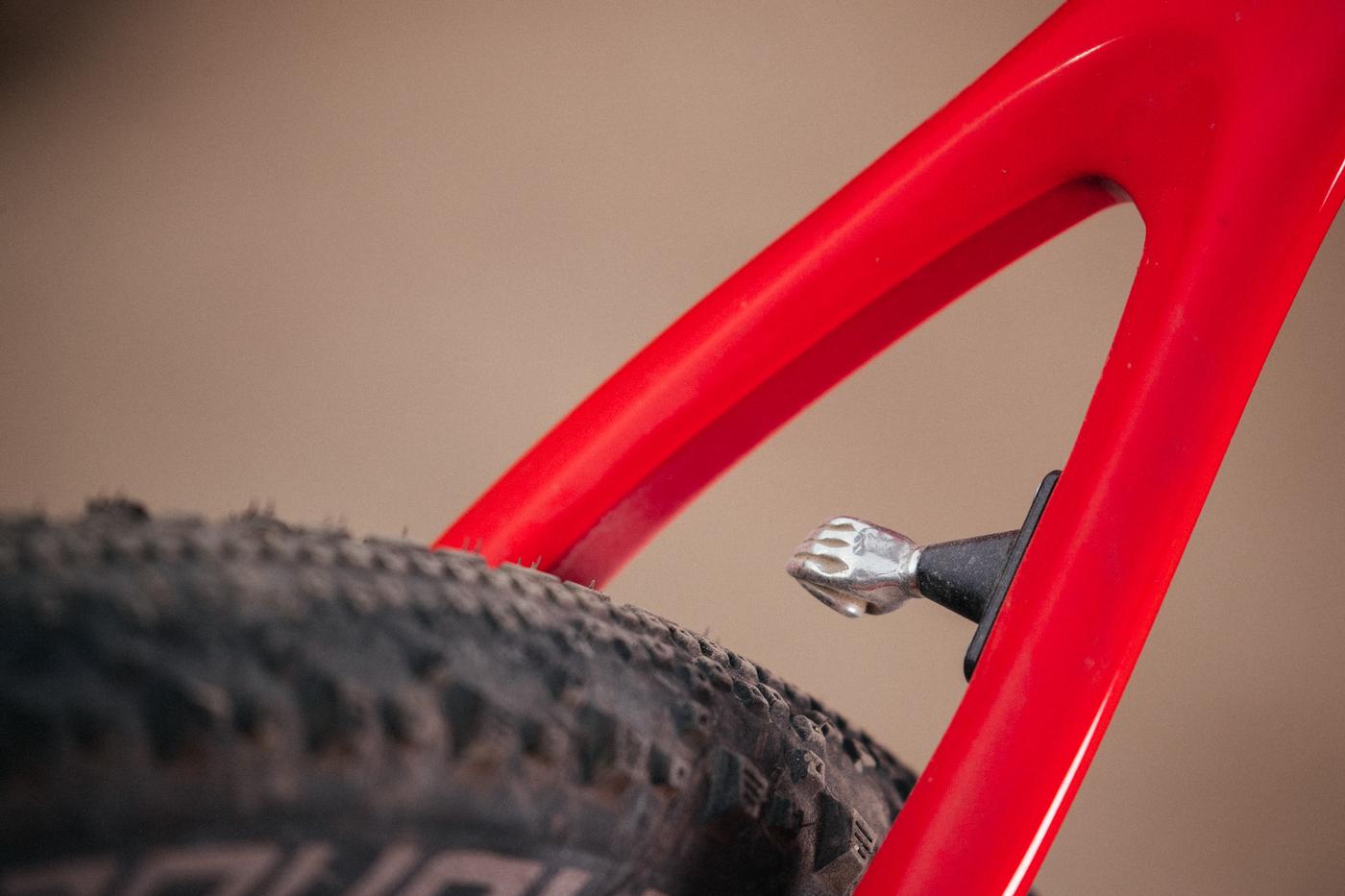 Then there are my only points of critique. For a frame that’s so elegantly designed, the rear fender mount “integration” is hardly that. Sure, I love the nod to the classic canti cable hanger, the “hand job” – HELL YEAH, CHERN! – but the seat stay fender mounts look like the little plastic nubs you snap off from the fuselage while building a model airplane. There has to be a better way. When matched with an ENVE fork, which doesn’t have mounts at all, it leaves you wondering: do you have to buy two different types of fenders? I’m asking because I never run fenders on my bikes and do not live in an area where they are necessary but as an honest query, if you have to run a clamp-on fender for the front, why not just leave the rear triangle fender mountless to run the same type of fender on both wheels? Or at least integrate the mounts on the inside of the seat stays. Again, this is a very minor detail, but I felt like it was necessary to note. Luckily, the seat stay mounts disappear in the cassette cluster, visually. 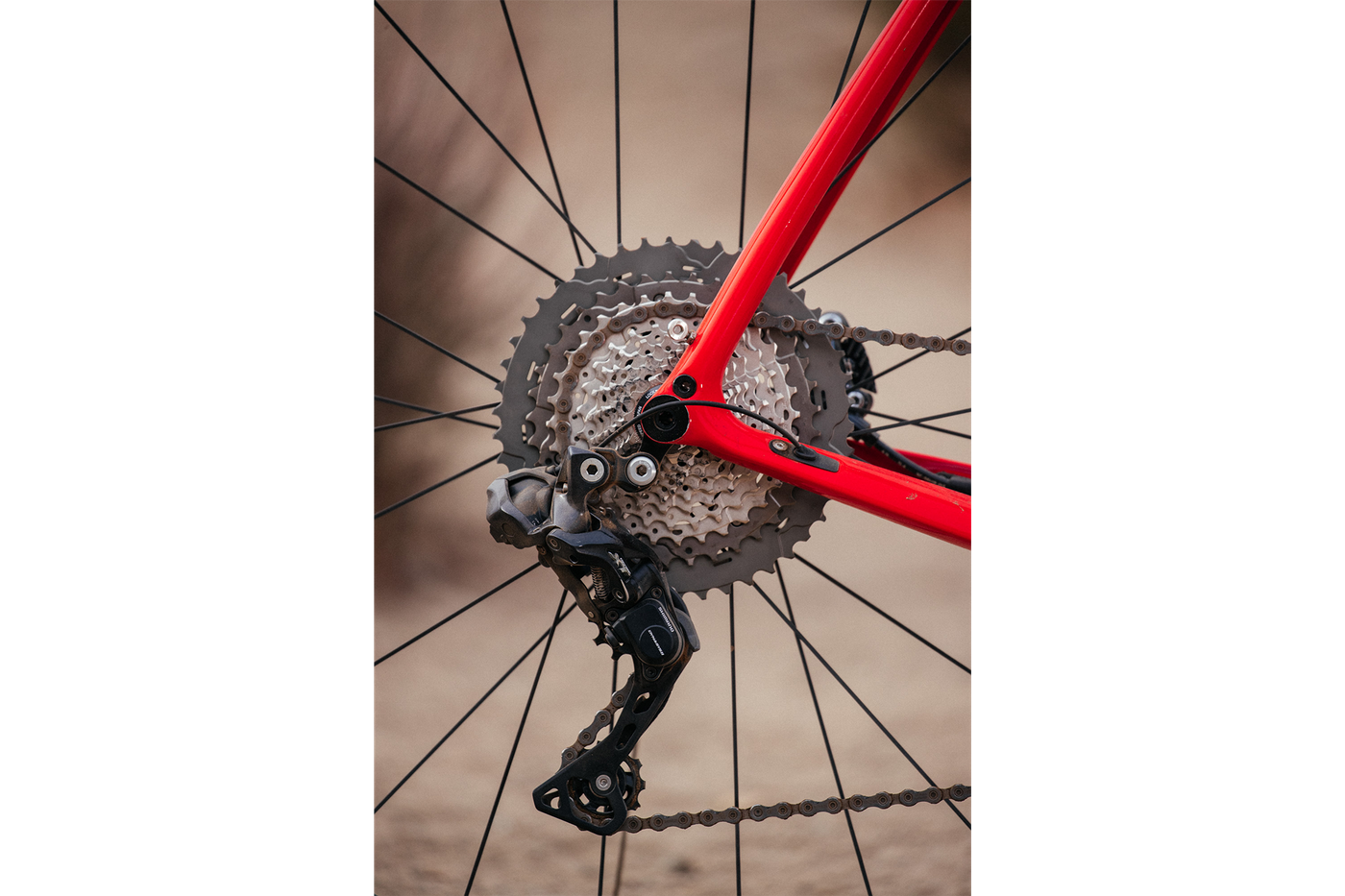 The Hakka MX comes in two complete build kits, along with a simple frameset offering. Di2 integration is so clean and simple, it begs the question: why wouldn’t you run Di2 with the XT derailleur? Not so fast… Di2 is one of those things I love to have on review bikes but would probably never put on one of my own. I’ve been in the absolute middle of nowhere enough times with someone who has a Di2 bike, only to watch their batteries unexpectedly die and the day’s stresses compound ad infinitum. On a bike like this, it probably means you’re on a dirt road, at high elevation, with no cell reception and not a soul for miles. This sounds like Di2 fear-mongering, and perhaps my experiences have given me some form of electronic post-traumatic stress, but still. 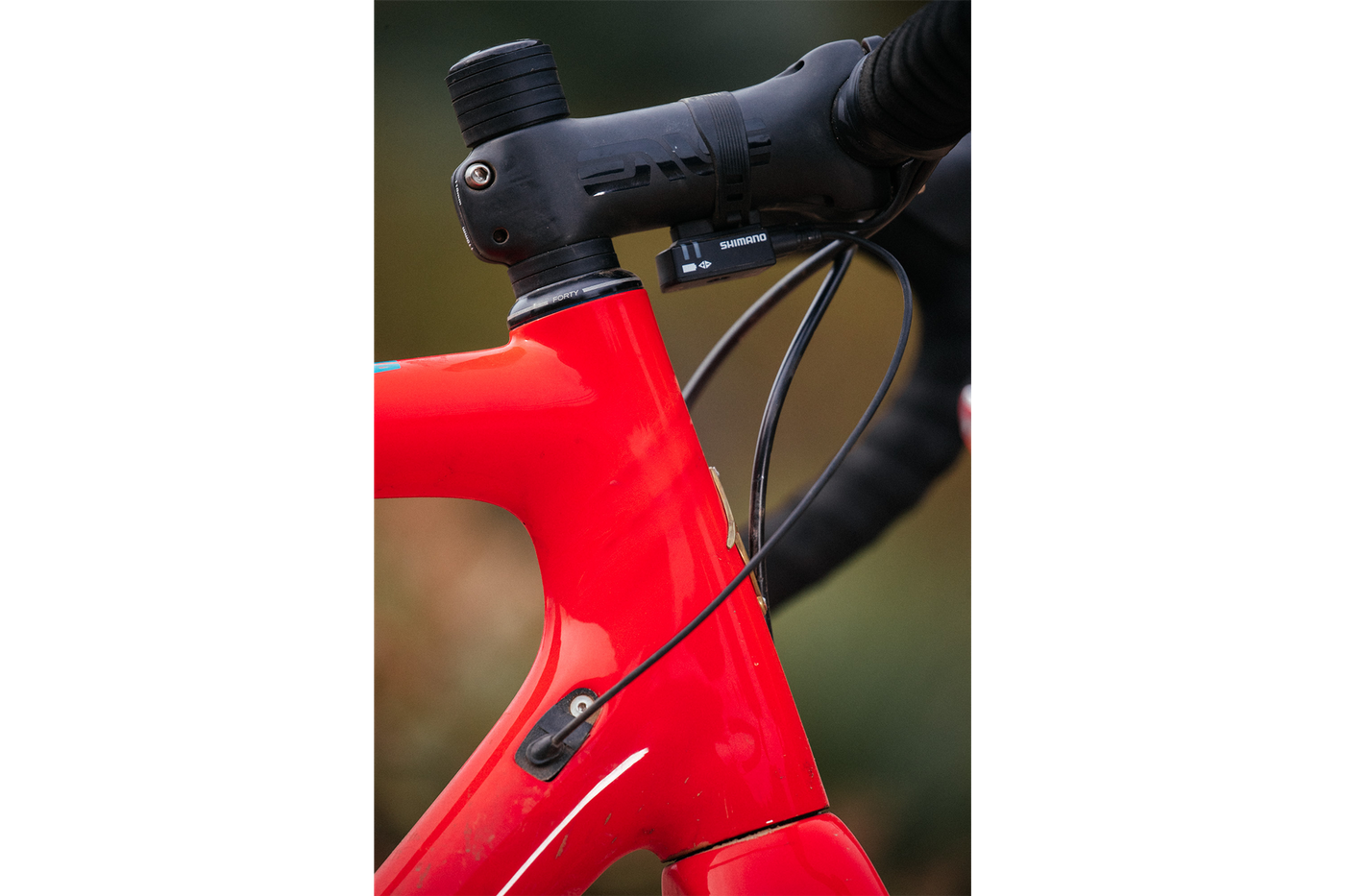 Yet, it just feels so damn good, from the shifting to the hydro disc feel and the setup. Oh, the setup is so easy! Especially for a ‘cross racing bike, it’s nice to not have to worry about derailleur cables gettin’ gunked up, throwing off your shifting. In fact, the shifting never changes. It’s always consistent, which is so convenient. Yet, after switching between SRAM’s 1x system with Shimano’s Di2 XT integration, I’ve noticed one thing: the cassette. The jump from the 10th cog to the 11th – 46 tooth cog – is very drastic. Also, not having a 10t cog in the cluster makes a big difference when it comes to descending on sealed roads. With SRAM’s 10-42 cassette, it’s nice to always have that 10t to klunk into, leaving you the ability to go to smaller rings up front for even fewer inches while climbing. No matter how small of a ring I go to on the front, the 10t cog always seems to be just enough for that particular bike.

Luckily, the Hakka MX comes in two options to settle this dispute: SRAM Rival1 with Stans Wheels, Ibis post and stem for $3,299 or Shimano Ultegra / XT Di2, Easton carbon post and stem and Ibis carbon wheels for $6,499. Ibis went with Praxis Works for their cranksets and bottom brackets, resulting in a damn fine overall package with that beautiful, mudered-out crankset. Or, if you prefer to build it yourself, as a frameset for $1,999. 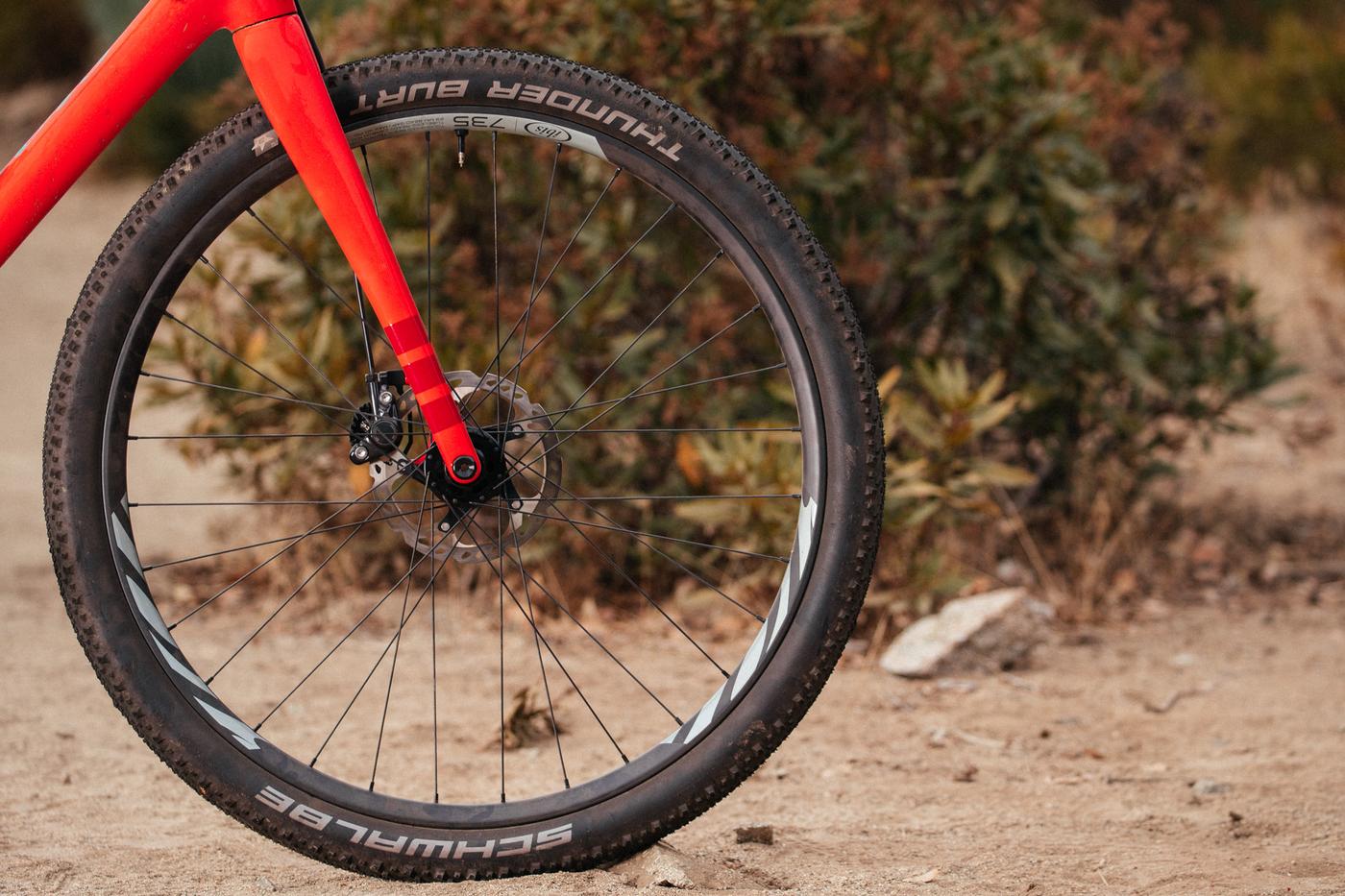 If you’ve yet to party with a 27.5 ‘cross bike, you’re missing out. In fact, when Ibis sent their new 700c carbon disc wheelset over to test on the Hakka MX, I really didn’t want to swap them out. The Hakka rips on 27.5 and merely rides on 700 and no, that’s not a critique of the bike as much of a statement for what a difference bigger tires on smaller wheels make. At this point, I don’t know why any company wouldn’t make this an offering. All of my disc brake, drop bar bikes are tippin’ on 27.5 now. Why? It’s just better. More tire, more volume, more traction and that means more vibration absorption on rough roads or trails. As for the wheels, I’m a fan of Ibis’ carbon wheel offerings and they gave me no issues during the review period. They set up tubeless easily, have external spoke nipples, making on-the-trail maintenance – if you ever need to – a sinch and they look great. Case closed. 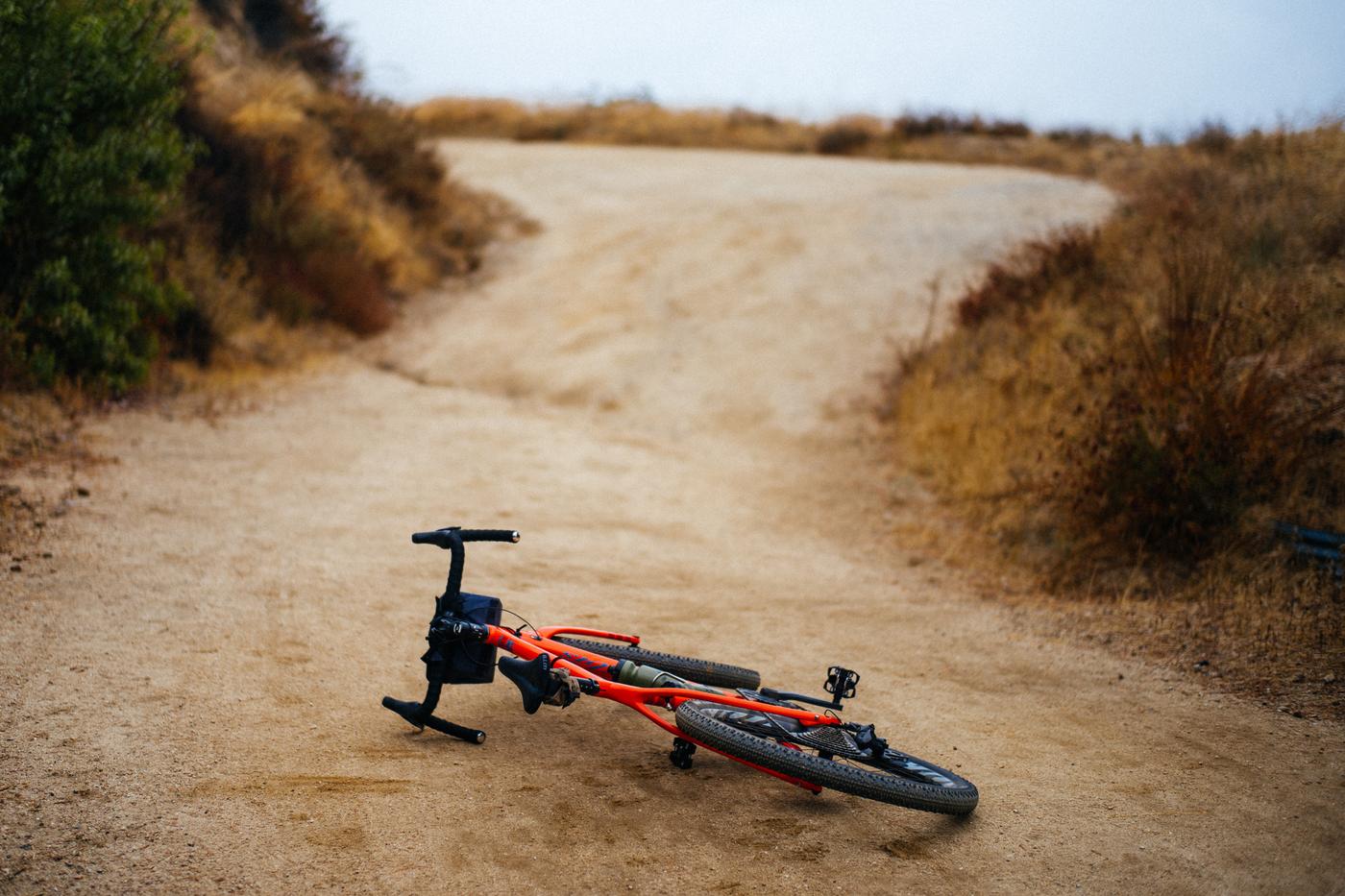 Long ago, I realized I’m not a great climber, nor will I ever be. I can hold my own, but I’ve come to accept that it’s not my strong suit. Thus, I really don’t gauge a bike’s prowess by its ability to climb or associate going up a grade with any number of adjectives. Rather, for myself, a bike truly comes alive and earns its adjectives on the descents. That’s when a string of words come into play: shreddy, snappy, zippy, sprightly, and lively come to mind. The Hakka MX is stable in the sense that it’ll correct itself under you when you need it to, yet it won’t pull away from you on tight turns.

However, one of the unpredictable side effects of the Hakka MX being so closely tied to the Ibis MTB genealogy is the not so much in the design, but the material. Coming from steel and titanium bikes, it’d been a while since I’ve ridden a carbon ‘cross bike. Initially, with the 27.5 wheels, I kept feeling like I had to air down more and more to soften the ride. On 700c wheels, I learned to take the grip it and rip it approach because there wasn’t enough volume in the tires to air down anymore. Carbon fiber is stiff. Which is great for a road race during a sprint and for full squish mountain bikes with inches of travel to spare, but it takes some getting used to on a drop bar platform. After a few rides, it wasn’t as apparent and I got used to it.

Call it a “gravel,” “cross,” “all-road,” or just a “road” bike, the Hakka MX is whatever you want it to be, whether that’s one of the above, or all. It’s a lightweight, snappy, well thought-out, modern update to a timeless classic that fits right in with Ibis’ current mountain bike lineup. It shreds on the new 27.5″ wheel option and even though I’ve yet to strap bags on it, would make for a worthy dirt road bikepacking tourer. The size 58cm I reviewed weighs 20lbs on the nose as photographed (with empty bottles). While calling something a “Jack of all trades and a master of none” is not necessarily a compliment, the Hakka MX has evolved past that, which will result in a quiver coup d’etat.

See more information at Ibis and holler in the comments with any questions!