The first thing you notice is the miniscule weight of the carbon CC frame. Weighing just 1570 g, (18.88 pounds fully spec’d without pedals for the size 52cm) it’s crazy light. As with any human-powered adventure, I am a firm believer that the less weight your body has to move, the longer and further you will be able to ride each day. At two pounds lighter than my current adventure bike setup, that makes a huge difference over the course of a few weeks or even months on the road.

One thing Santa Cruz and Juliana understand is off-road geometry and much like the Stigmata, the Quincy is immensely competent on a variety of surfaces. Gone are the days of bike brands making frames for women with short top tubes that don’t fit anyone. As Geoff Casey, Director of Design at Santa Cruz, put it when I asked him about the subject, “Men and women care equally about busting up their sensitive bits on the top tube and want the same ride characteristics.” So when you compare the Quincy and Stigmata geometry, the main difference you will find is in available sizing. The Quincy frames come in 49 cm, 52 cm, and 54 cm, accommodating women, and even men for that matter, from 5’0” to roughly 5’10”. 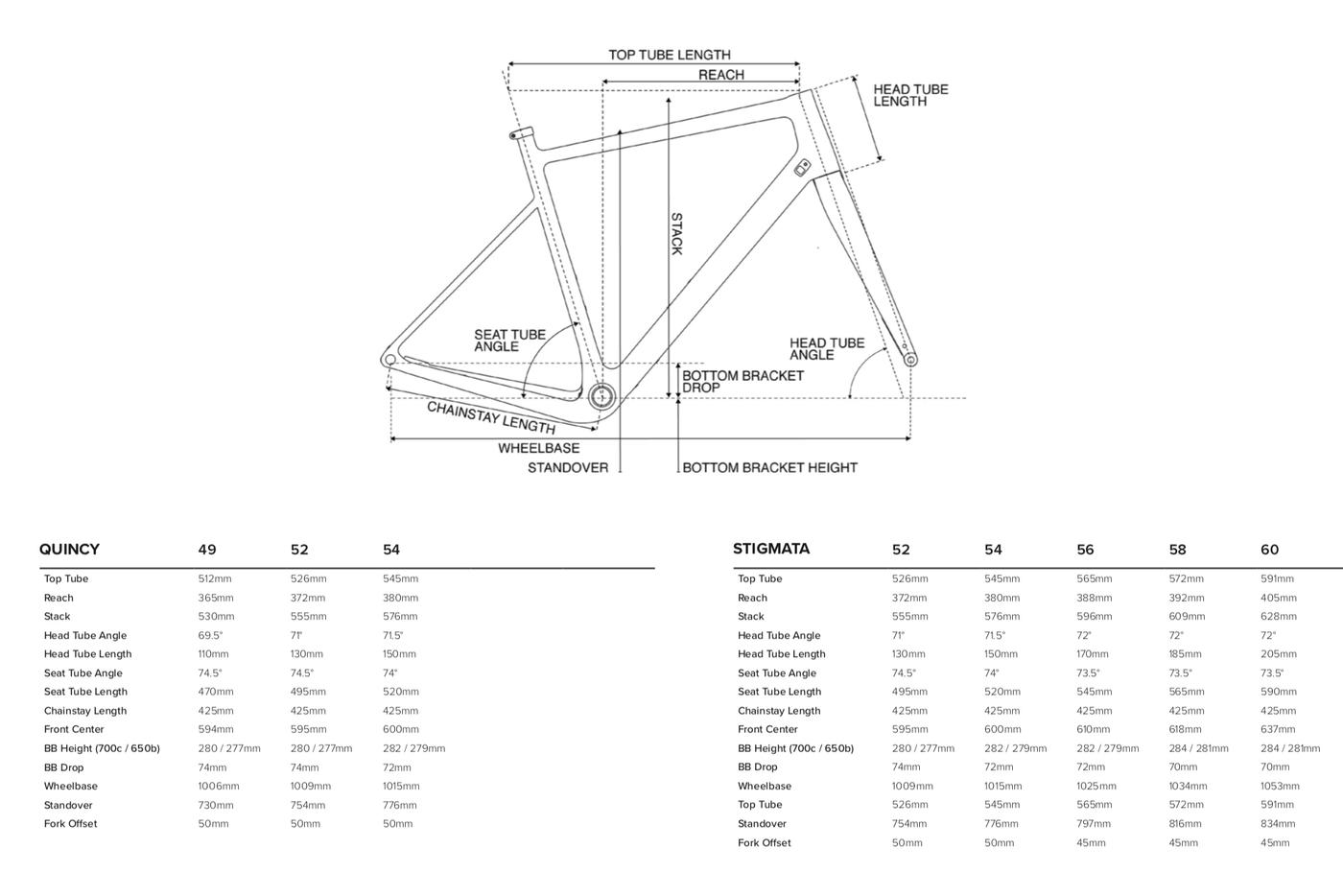 Juliana’s General Manager, Elayna Caldwell, once said in an interview that while Juliana and Santa Cruz share design, development, and product management resources, Juliana exists to give women a chance to have their own brand, their own look, their own feel. She wants women to be able to have something that they can grab onto that is their own thing, not just riding the same bikes as the guys. This is one reason why the frames are available in smaller sizes. And to give women their own look and feel, check out that psychedelic, translucent Midnight paint job that lets you see the carbon fiber layup underneath and will leave your riding companions — yes, even the guys — oozing with major bike envy. And carbon for an adventure bike? I say, hell yes. I have completed many off-road, cross-country rides on carbon bikes that my riding companions swore you couldn’t do without a steel or titanium bike just so it could be welded in the middle of nowhere. I have yet to run into problems with carbon (knock on wood?) and I expect the Quincy to do equally well, if not better, as the Juliana team knows how to reinforce and layup fibers differently on the major stress points to ensure the frame and fork can take repeated beatings.

As the Quincy is meant to be taken on adventures, the frame comes ready with three bottle cage mounts and fender mounts. No fork mounts on this one, however, for those looking to really load up the bike with gear. 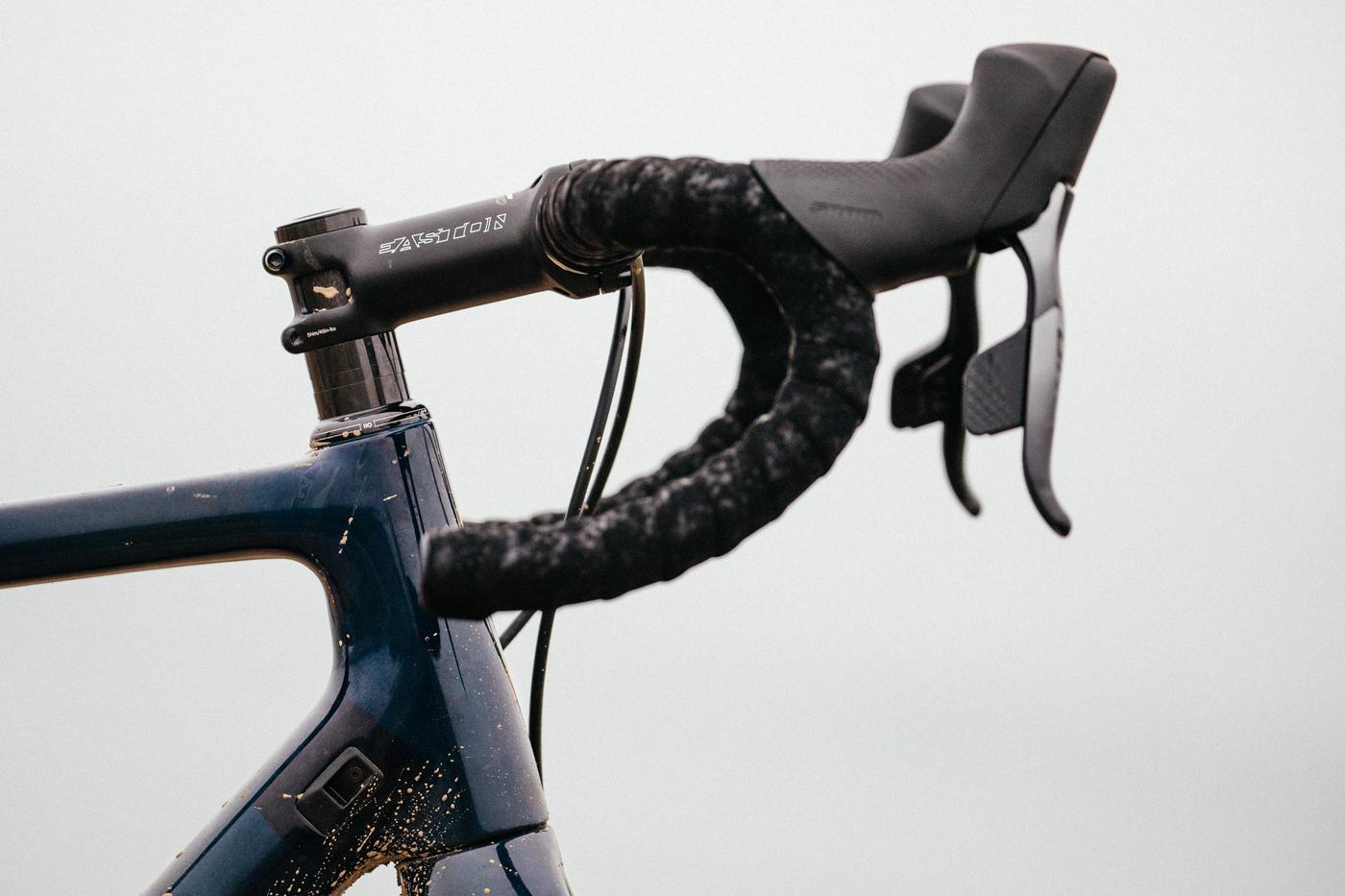 For gravel riding, I like drop bars for their natural riding position and versatility paired with mountain bike gearing for slogging up steep, rough terrain, especially with a loaded bike. The Quincy build I rode features Easton EA70 AX Flare bars with a drop flare of 16 degrees. This somewhat larger flare encourages a wide elbow stance in the drops, giving you the same advantage of flat bars when descending, cornering, or navigating tricky rough sections, namely improved balance, stability, and leverage for moving the bike quickly beneath you to avoid falling in those dreaded rain ruts. But that flare does not compromise the normal width of the hoods or tilt the brake levers too much so that it’s uncomfortable riding on the hoods for long periods of time.

I appreciate that Juliana took the time to fully spec out relevant female-friendly components, down to the saddle. The women on the product team rode a bunch of different saddles to choose the one they liked best. It just so happens to be my favorite saddle as well — the Ergon SR10 Sport Gel Women’s. Every single one of my bikes now sports Ergon women’s saddles. The Quincy build kits spec both 700c and 650b wheels with clearance for up to 700c/47mm or 650b/2.1” so you can tune your wheel and tire performance any way you like – skinny and fast for commuting or even cyclocross, all the way to full-on mountain bike rubber for serious off-road exploration. Our rides were set up with Santa Cruz Reserve 25 650b Carbon Rims and 2.0-inch WTB Ranger tires, a combination that really shines on the trail. A couple longish road climbs saw the guys on 700c wheels and skinny tires pull away quite quickly but I could bomb downhill with the best of them.

Set to 25-28 psi, the XC-friendly tires offer pillow-like cushion, so much so that you hardly miss any suspension on the rough stuff. And according to Santa Cruz, these specific rims are designed to be a little more compliant to reduce chatter and add a bit of comfort for gravel use on bikes without suspension, which is the reason for their cross-section shape, layup, and 24 spokes. 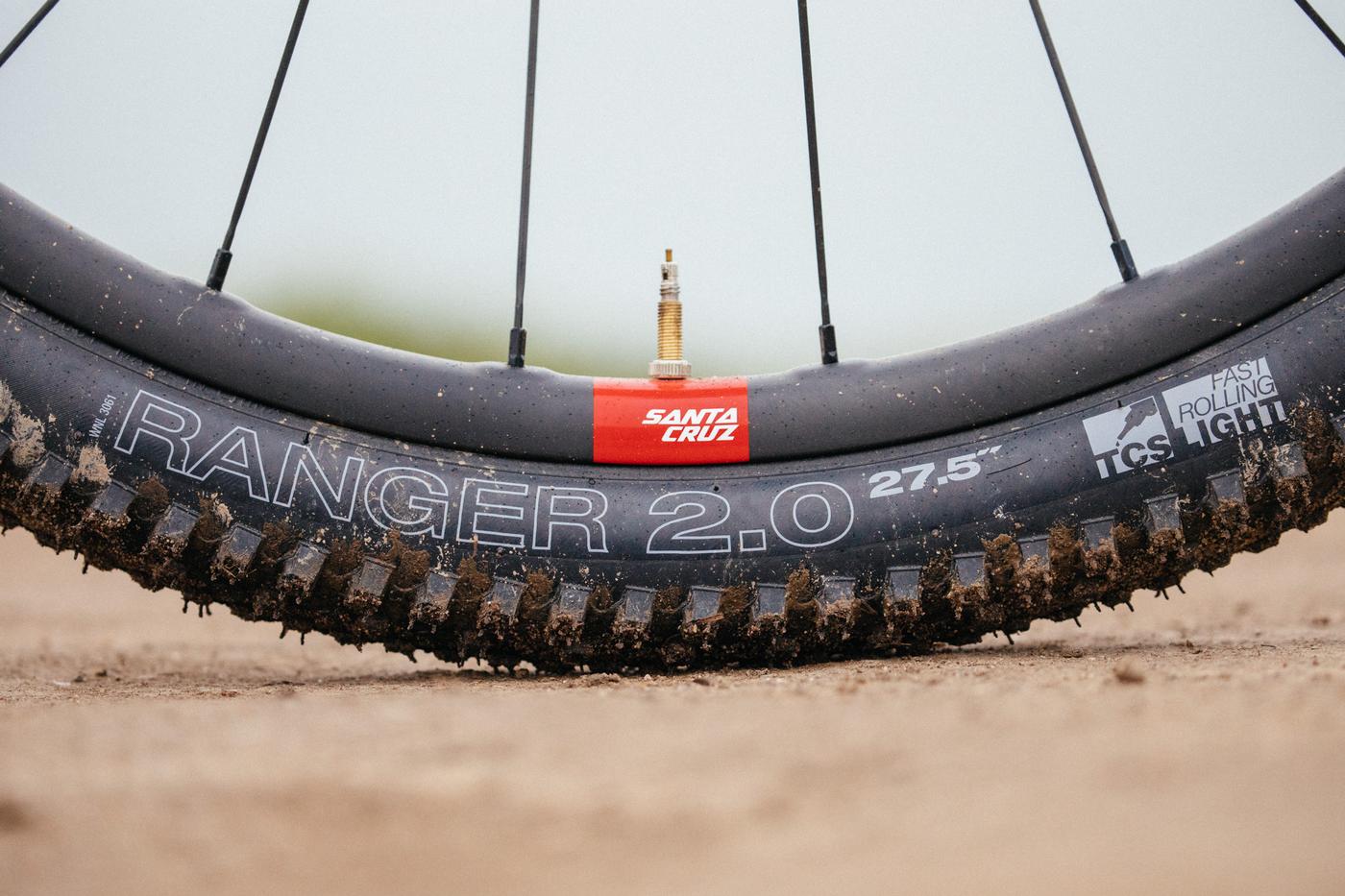 I’ve ridden some pretty chunky routes on 700c wheels and 40mm tires and my body hurt after a long day in the saddle. But even after four hours of riding the Quincy, I had no aches and pains or the muscle fatigue that comes with your body continually absorbing the hits.

A couple of years ago Santa Cruz started making their own wheels as they knew they could create stronger rims. Reserve wheels are not only the strongest wheels on the market, but they solve a host of problems that have plagued other carbon rim designs in the past. Bonus: they are affordable and backed up with a Lifetime Warranty. As you are probably not going to take the Quincy on anything rowdier than you would a Juliana or Santa Cruz mountain bike, you can expect the Santa Cruz Reserve wheels to see you through anything. SRAM’s new AXS component integration system is basically the mullet of the bike world. This new 12-speed version can be used on a wide variety of bikes and enables you to mix and match road and mountain bike components to build out your perfect ride. While Juliana committed to the trend of 1x in gravel bikes with no front derailleur hanger, the versatility of AXS will still allow you to do multiple configurations like throwing on a wireless dropper post (Unfortunately a 27.2 wireless RockShox dropper does not exist at this point.)

The bikes we rode were set up with Force eTap AXS shifters, 1x hydraulic disc brakes, and 1x crankset matched with X01 Eagle AXS and its heavenly 10-50t rear cassette — in other words, my perfect adventure bike. Couple the lightweight frame with Eagle’s wide gearing range and you can spin up pretty much anything. Along the ridge to the summit of Chalk Mountain, we hit some punchy, high-double-digit-percent-grade rollers with Strava segment names like “MuthaFooka.” With a little speed, I could just throw it in granny gear and spin up them. The tighter progressions on Eagle also help you find just the right cadence, especially helpful on rough terrain and mean you don’t have to sacrifice on the small end for those road sprints to taco time and Micheladas at Cemitas in Davenport, CA.

A new fluid damper in the rear derailleur cuts down on chatter and bounce when rolling down rough sections. Buttery smooth eTap is tough to beat, and it should be noted that AXS shifting is quicker than the previous version, smooth and precise with bomber hydraulic brakes that offer excellent stopping power and modulation. Riding the Quincy can be summed up in one word — fun. It’s a comfortable bike to ride all day, multiple days in a row, yet responsive and playful. Thanks in part to the longish wheelbase and the rim/tire combo it’s pretty stable handling on the rough stuff for a drop bar bike. And once you go Eagle, you’ll never go back as they say, to the possible detriment of your wallet.

The only hesitation I would have on spec’ing the bike with a wireless drivetrain would be for major overseas adventures. I need to ride something that Adis the auto mechanic in Osh, Kyrgyzstan can jury-rig a fix on if all goes to shit, not to mention the effects of cold, altitude, endless dust, river crossings, and riding for weeks between power sources. See more information on the new Quincy at Juliana Bicycles. Be on the lookout for John’s review on the new Stigmata next week!