Jumping Right In (Without Looking)

Evil is evil. They’re going to push, prod, poke, and piss off those looking to follow the right-hand path, those who walk a straight line, and potentially even product designers across the industry because once the word gets out, you’ll see some permutation of this bike in more brand’s catalogs. Or maybe you won’t and I’ve wasted hours upon hours reviewing this big hunk of plastic. Superlight plastic that is… Evil has shifted the paradigm here and whether you like it or not, I believe it’s for the better. 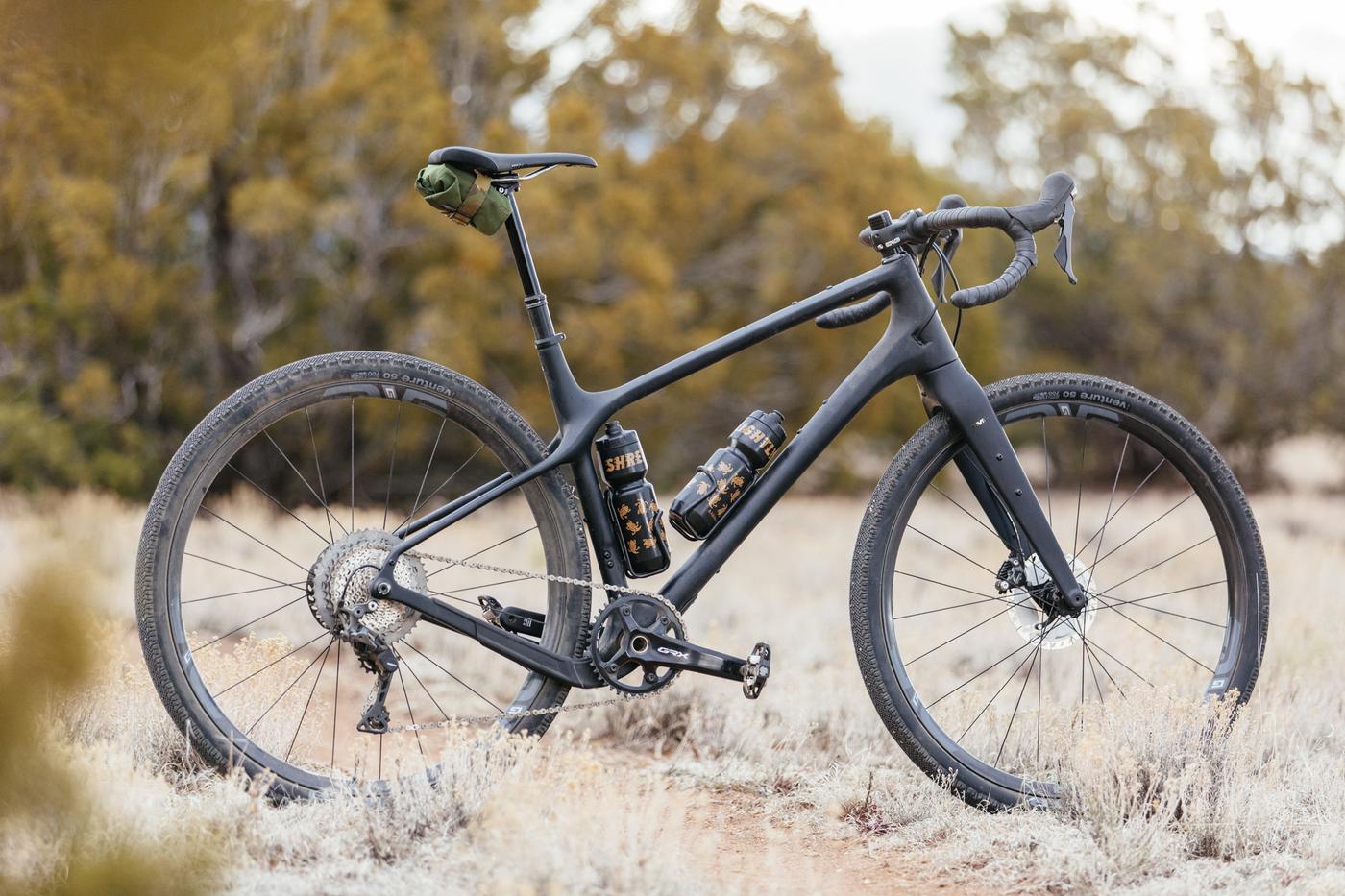 Sammy Hagar partied hard, so it makes sense that this bike is named after him. Did Sammy ride gravel? Probably not. Doubtful, even. That’s where the reference ends. The dude partied and Evil named a bike after him while nodding to the lycra-clad roadie 2.0 market who pines for new, fast, and fun things. Can ya blame them? Gravel bikes are hot right now and in an Icarian-manner, they have flown right up to the sun. 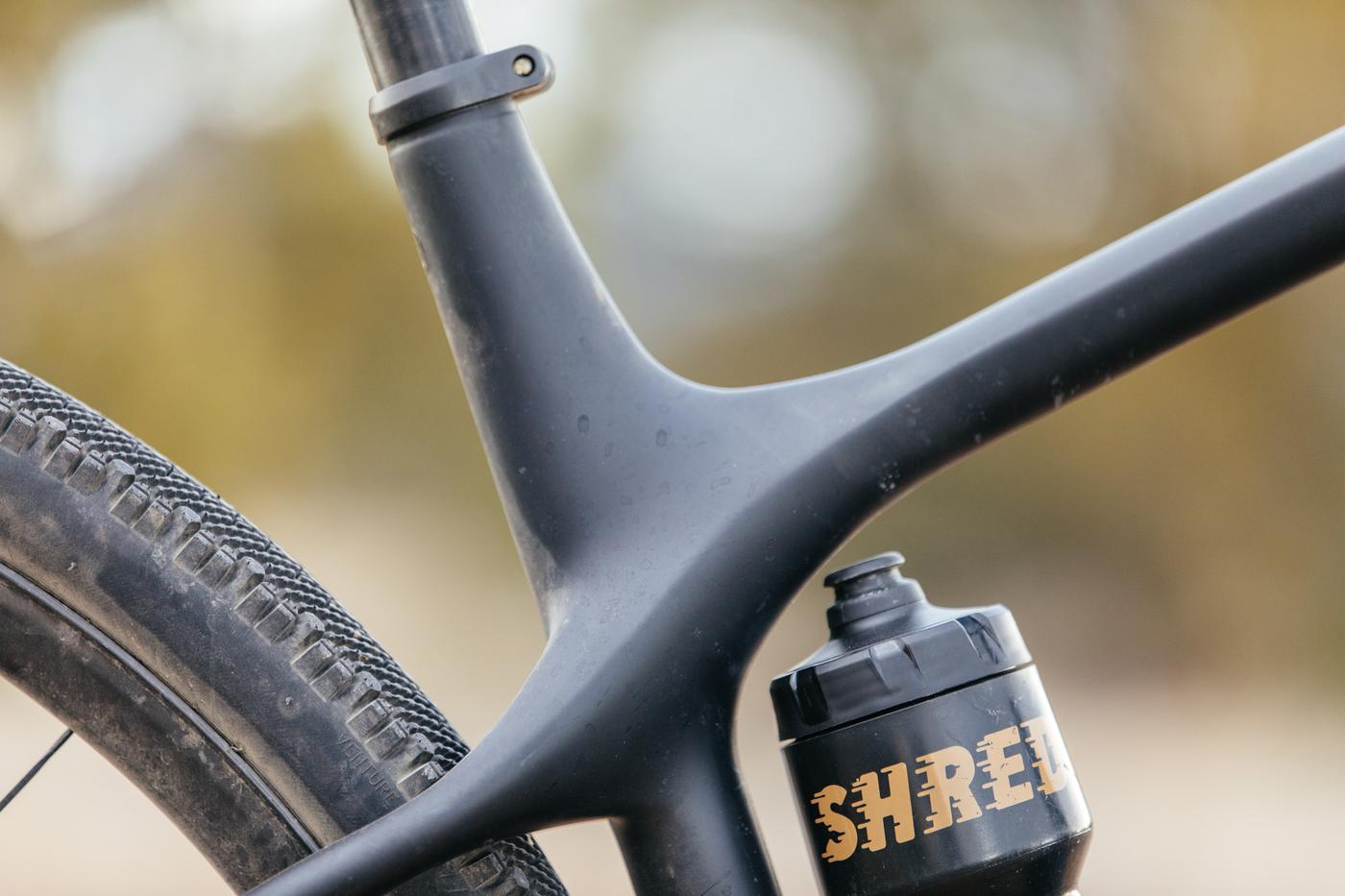 Why’s It Look So Funny?

I’m fairly certain Evil didn’t pull a rib from Adam to form this bike. Instead, they dug deep into the abyss and forged this monstrosity, using the baseline they know best: MOUNTAIN BIKES. Do I even need to say that? Probably not but I am anyway. The Chamois Hagar looks like a dang trail bike with a big-ass fork and short chainstays. The downtube, headtube, front triangle space, all harken to the brand’s MTB DNA. This explains why – and all this should be taken as my opinion here – it rides so damn well.

Backing up a bit, we are huge supporters of underbiking. This website gained a lot of notoriety documenting dumb rides on ill-equipped bikes. We started out with “gravel” by doing rides on cyclocross bikes with 32mm tires, canti brakes, and ridiculously undergeared drivetrains. If you had told me 10 years ago that this would be where we’re at with “cross bikes” I would have sung hallelujah.

These days, pop into the comment section of this site where a gravel bike with big tires and a progressive geometry is posted up and there will be someone in there assuring us that gravel bikes are just XC bikes from the 90’s and early 2000’s, which I would beg to differ. Shhhhhhh honey. They are not because, those bikes are completely different, geometrically speaking, and modern gravel bikes are moving to lower trail, more stable geometries these days. Stable in the sense that the bike will correct itself under you easier, not stable like an off-road-Cadillac. 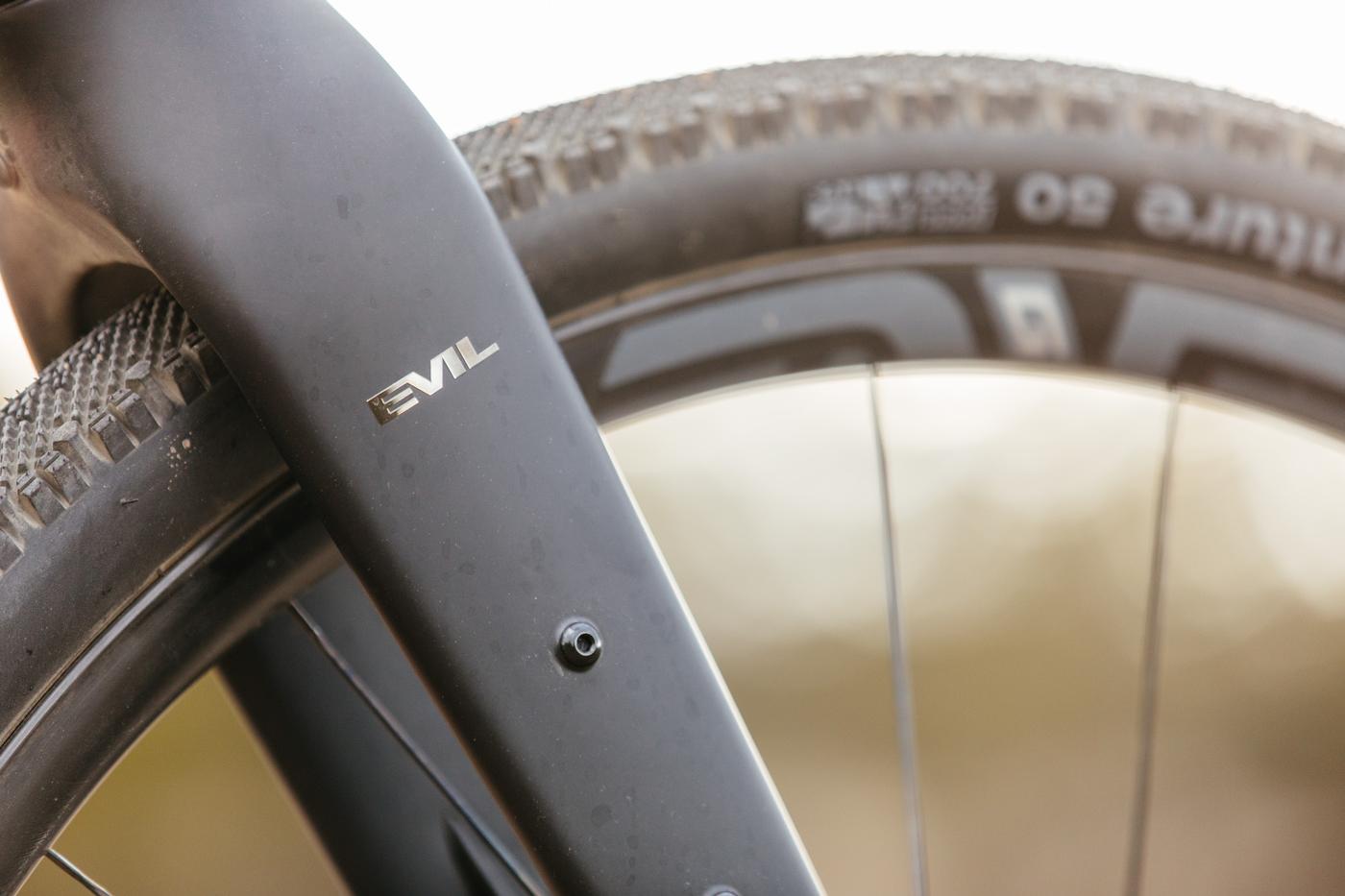 So why does this bike look so dang weird? It’s all about that all-mountain geometry Evil injected into the carbon form. To start with, the head angle is a yeeeeee-enabling 66.8º, designed to be used with a 50mm stem, offering up reach more akin to a sagged MTB than a gravel bike. Since there aren’t many forks designed for head angles that slack, Evil made their own, which offers up 57mm offset and a 428mm axle-to-crown, resulting in 93mm of trail. This offers up an interesting by-product: NO TOE OVERLAP. Nada. Zilch. Even if you wear clown shoes, which why would you even do such a thing, but if you were inclined, you’d probably clear those too.

430mm chainstays and 80mm BB drop, along with double-dropped chainstays create some funny stuff at the BB cluster of this bike. It looks quite odd but after a while, you just get used to the whole damn thing looking kinda funny. Match all that with a super compact frame, road cranks, drop bars, and you’ve got yourself one divisive bicycle. 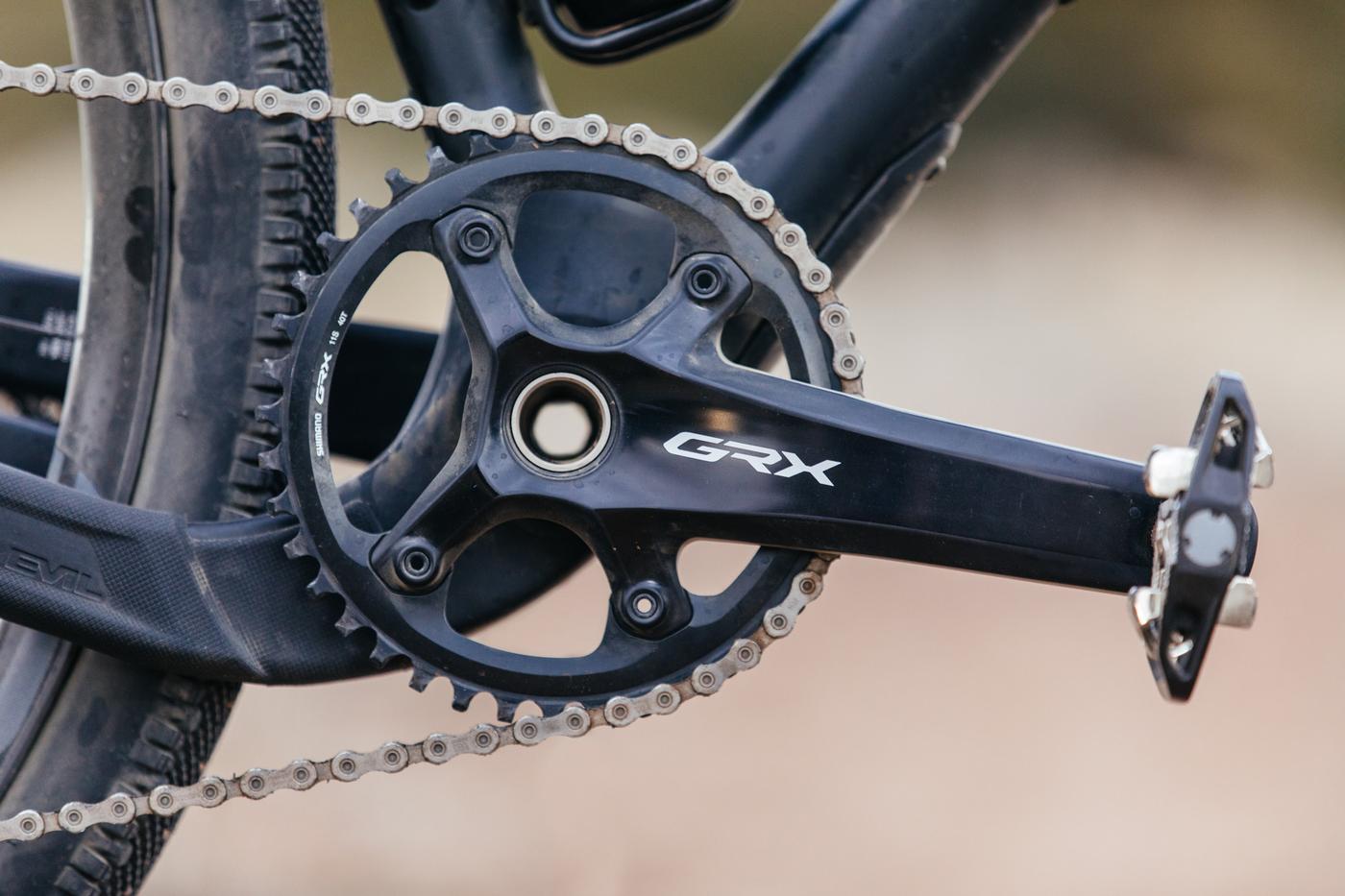 I don’t know many doctors, dentists, or lawyers who partied like Sammy Hagar did in his hayday, so even a balleur build like this needs some socio-economic verbiage to describe it accurately. This particular Chamois Hagar build is kinda like a busted-ass Toyota rock crawler that looks like a total shitbox but actually has about $50,000 invested in it, as it sits on four, 40″ tires, with beadlocks of course.

One of the cardinal sins the Gravel Antichrist is said to use to his advantage to bring the world to its knees is ENVE. ENVE, ENVE, ENVE, and Shimano. ENVE G wheels, ENVE gravel bars, ENVE MTB stem. If ENVE made a dropper, this bike would have it. Shimano’s killer GRX drivetrain makes sense too since it’s the first group from the brand to adopt their MTB gear range. Even the WTB tires are bad-ass, with a whopping 50mm outer diameter.

The thing that stood out the most to me is the dropper integration with the left-hand shifter. Brands, please stop putting dumb triggers on the drops! Just do this. It’s way easier and less likely to get cause a hand-cramp, mid-ride. 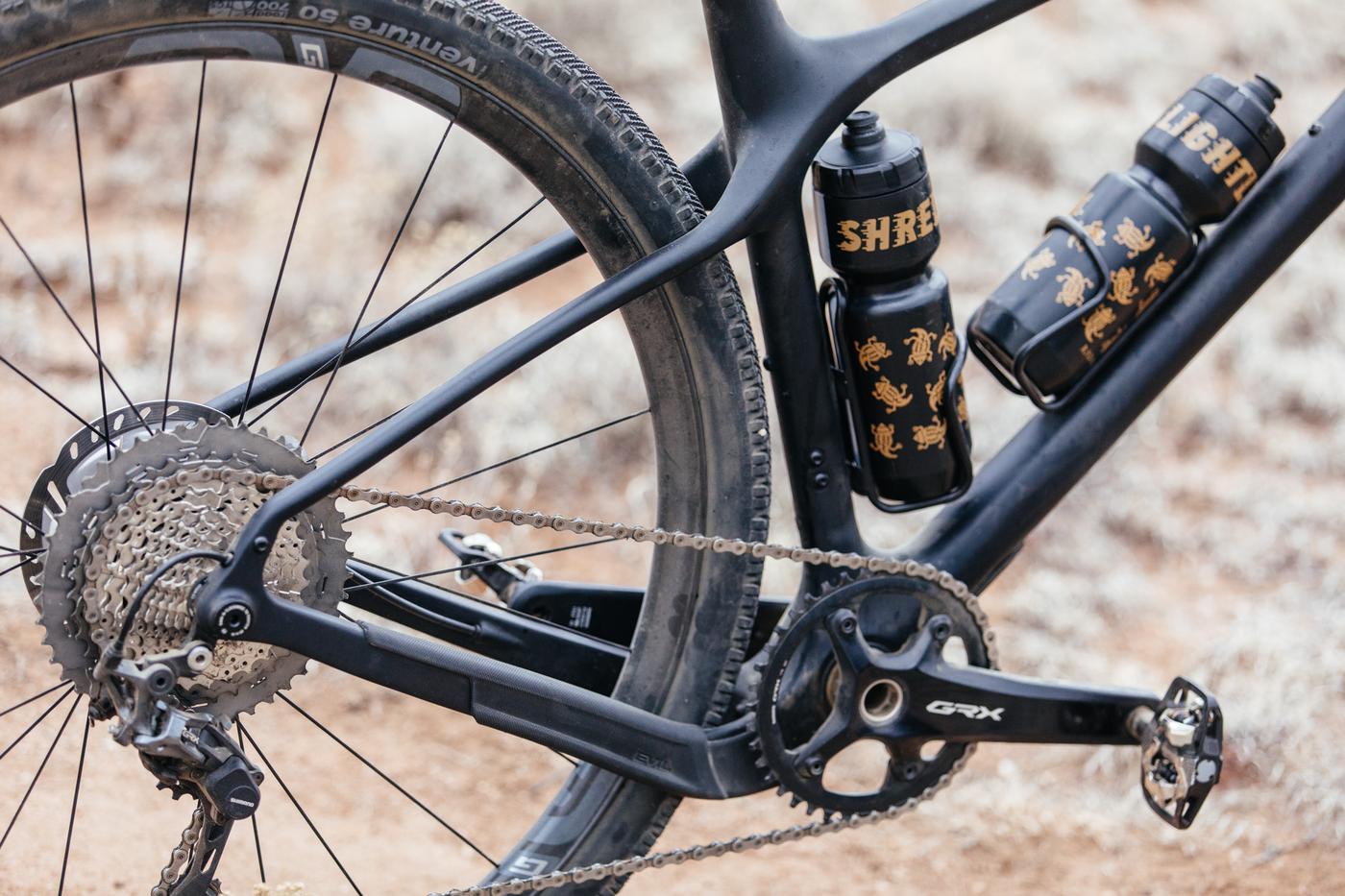 When I first saw the Chamois Hagar at Grinduro last year, I was immediately drawn to the frame design. The tubing profiles are beefy, yet the transitions between the larger diameter tubes to, say, the seat stays are so elegant and fluid that I spent a good long while documenting them to the best of my abilities. Speaking of the seat stays, just look at how they’re shaped to offer a bit of vertical movement, offering a bit of, sigh, compliance, while instilling confidence and reducing the full-on-party, white knuckle sensation of the front geometry. The rear triangle for sure keeps this bike planted in a controlled manner. Yet, part of me really wishes the stays were a smidge longer for mud clearance. Say, 440mm conservatively. Personally, I didn’t have any issues with mud during this review period, yet as I was shooting this bike, a big storm rolled in and I got very anxious because the mud in these parts can be debilitating. The last thing I want is to return a bike with rock/sand/dirt/glass wear because the aforementioned baddies were encapsulated in mud that raked itself down the seat tube as I pedaled home getting pelted with hail. Oh, hail nah. 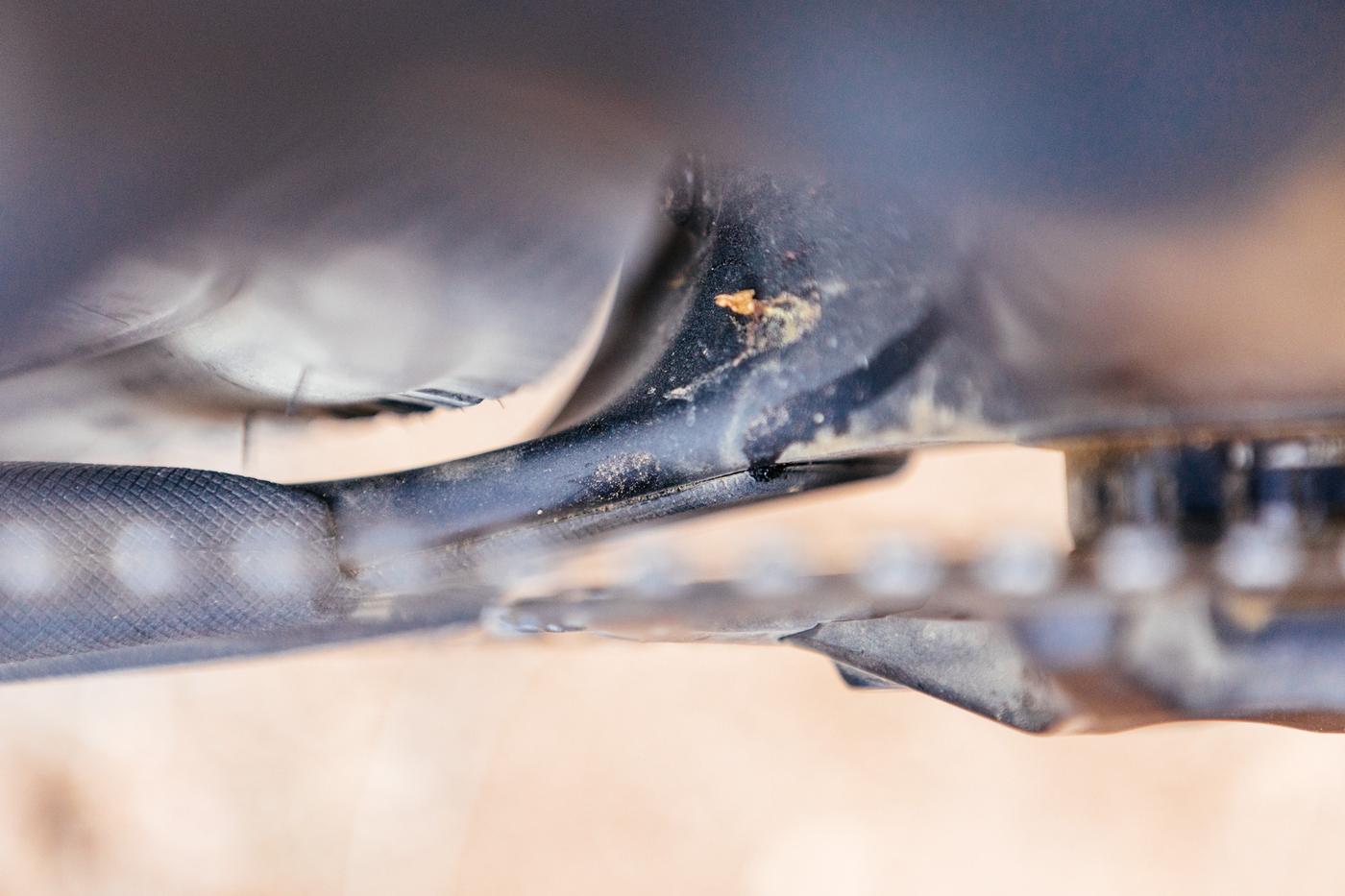 At the chainstays, there’s plenty of room, but again, steps could be taken to widen them, like for example the choice of a road crank on what is not your typical road bike made me scratch my head. There’s no harm done in a wider q-factor, from say a mountain bike, on a bike like this. It’ll offer up a little more room down there. 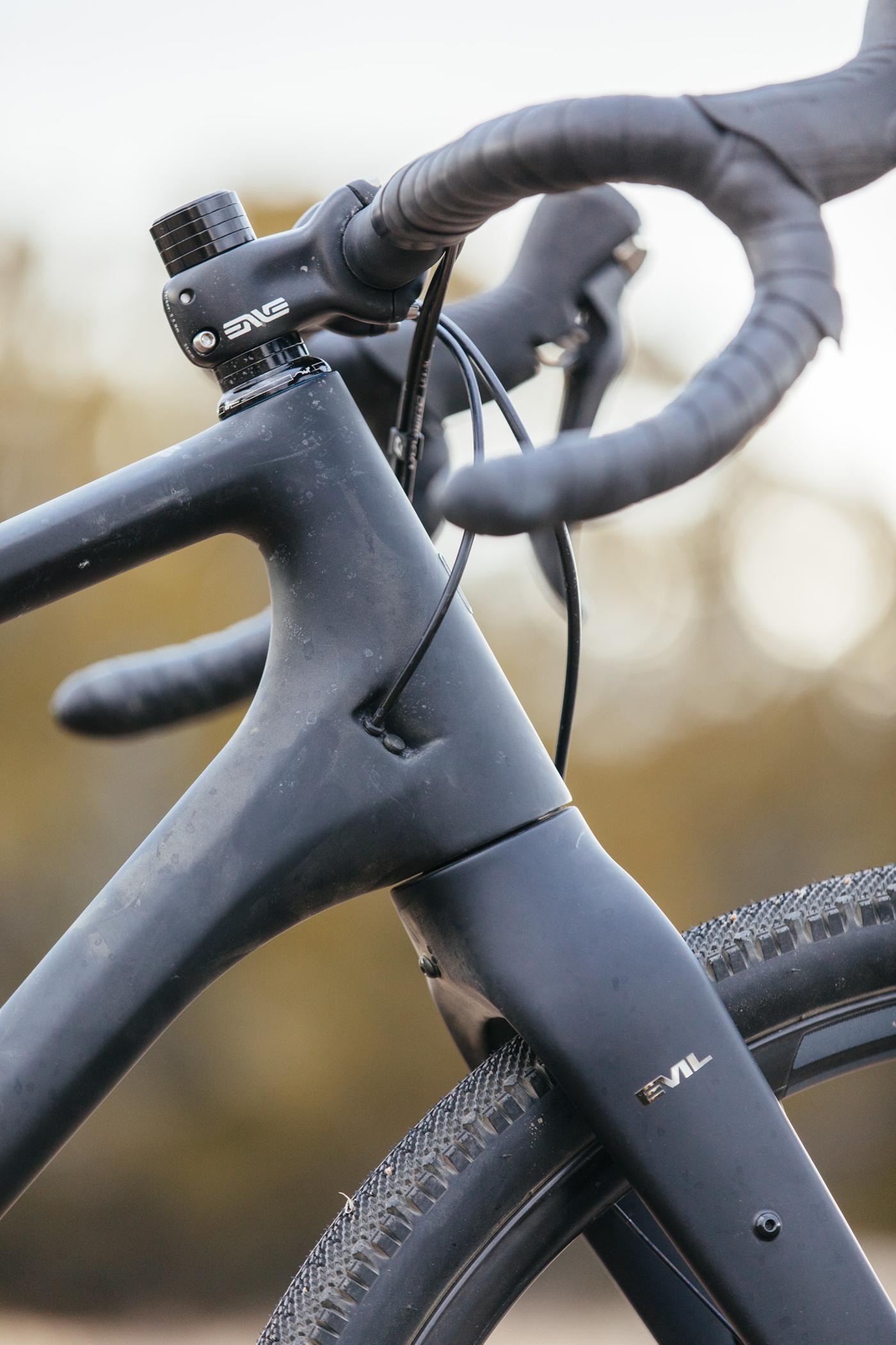 Back up to the front of the bike, let’s look at that gorgeous, big head tube. The internal routing ports are clean and the fork appears to be a long, oozing drip that tapers off to the front hub.

Yet, what I can’t help but point out, there’s only so much tucking and hucking you can do and if this bike has numerous provisions for bottles and bags, why not open the front triangle up a bit to allow for a bigger frame bag. This bike would be so naughty on a bikepacking trip and a larger triangle would offer up some more storage space, for like, you know, drugs and stuff. 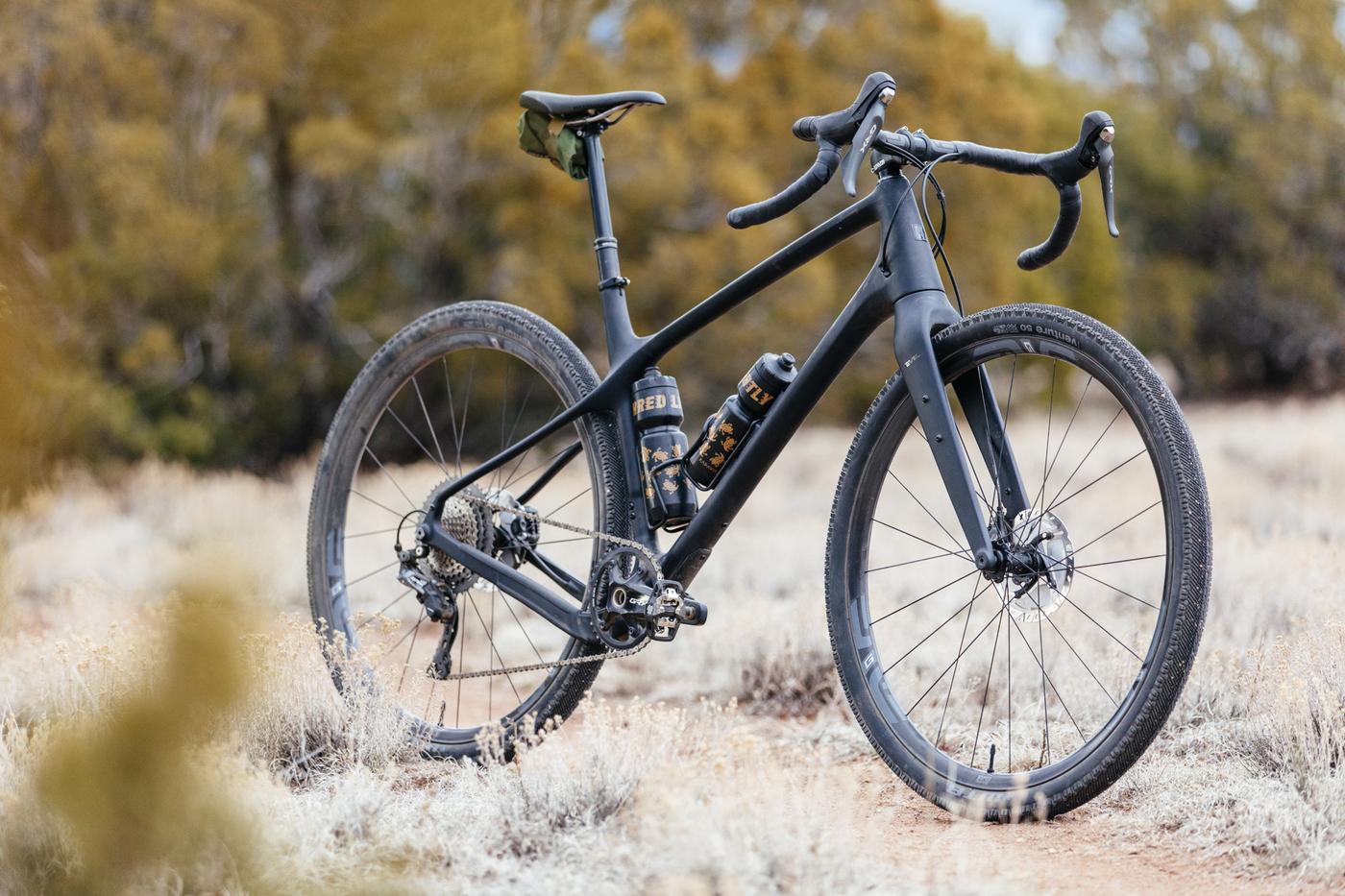 Ride the Beast Straight to Hell, or dont…

With a geometry like this, some people have predicted that the bike will “climb like a dog” to which I argue, it climbs like a hell hound. Ever climb a modern mountain bike? The Chamois Hagar size large has a 74º seat tube, which is not a 77º, but it’s far from a 72º, and if you ride on the saddle nose when you’re climbing singletrack, you are effectively steepening this angle, which is great for getting closer to the bike’s bottom bracket, while keeping that rear tire gripping.

That, combined with the trail, and the Chamois Hagar peels up singletrack with ease. Switchbacks are nada thang and likewise, fire roads are very comfortable. With this bike’s fit geo and reach numbers, you can really sit in on the climb comfortably, then when you get to the top and begin to descend, there’s enough time to put on your gloves or jacket, while rolling due to the super-stable trail number.

Descending is a no-brainer. It’s super stable up front, yet snappy enough on the rear to flick it around turns or avoid a pothole. It shralps dirt roads, double track, and single track. As much as you’d expect a rigid gravel bike with said geometry numbers.

What I will say is the ride quality takes a little bit to get used to so don’t take one around the block and call it garbage. Take it on a real ride and suddenly your 72º head tube bike will feel like a squirrel that got into your drugs at camp. By comparison, my Sklar, which I felt like was slack on the front end, has a 71º head angle!

All this is grossly overshadowed by how light this bike is! As this size large sits right now, with a spare tube and tool roll, two bottles, metal pedals, it rolls in at 20lbs. 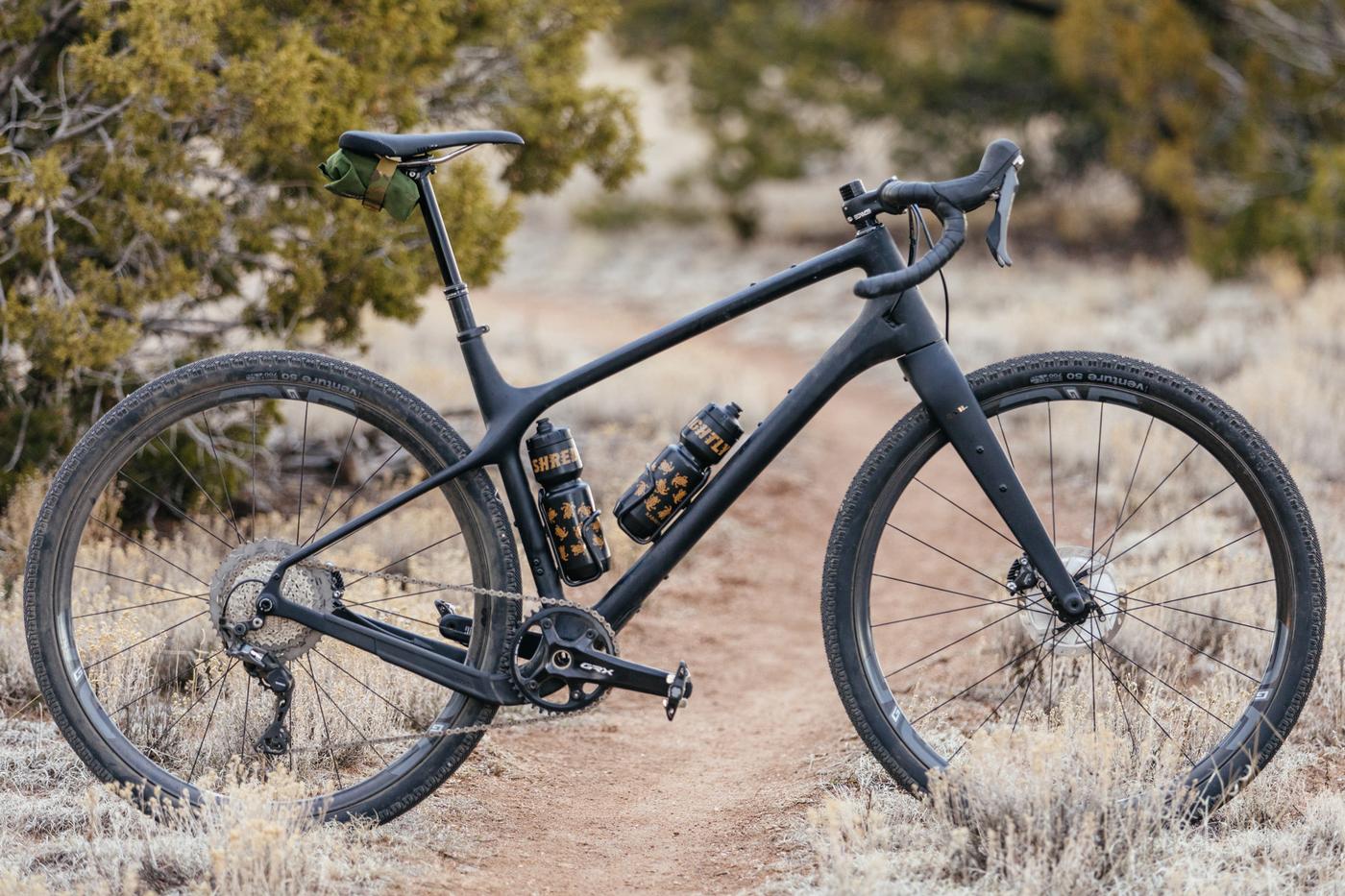 Take It Or Leave It

So you’ve read through all 1500 words and still aren’t convinced. Cool, no worries! This bike isn’t for everyone, and to be honest, it’s easy for me to assign silly phrases and biblical armageddon symbolism on a silly bike review because it’s not my bike, I didn’t pay for it, and I send it back when this is all done. BUTTTTTTTTT if I was a mountain biker that was turned off by most gravel bikes, or a roadie that was afraid of mountain bikes, or a gravel rider who hates riding the singletrack sections of races on a 73º head angle gravel bike, I would at least try one out, it’s sacrilicious!

The pricing of this bike is not crazy expensive when compared to other similarly-spec’d bikes but it ain’t cheap either. The frameset is the most accessible at $2,799. The GRX build without the ENVE upgrade is $4,799, and the SRAM AXS build is $5,899. As for this build, the ENVE upgrade package on GRX comes in at $7,539 and the AXS ENVE is $8,639.

TLDR: For those who don’t want to read this whole review. Hey, it’s ok! Let’s break this down for ya in easier to consume terms… 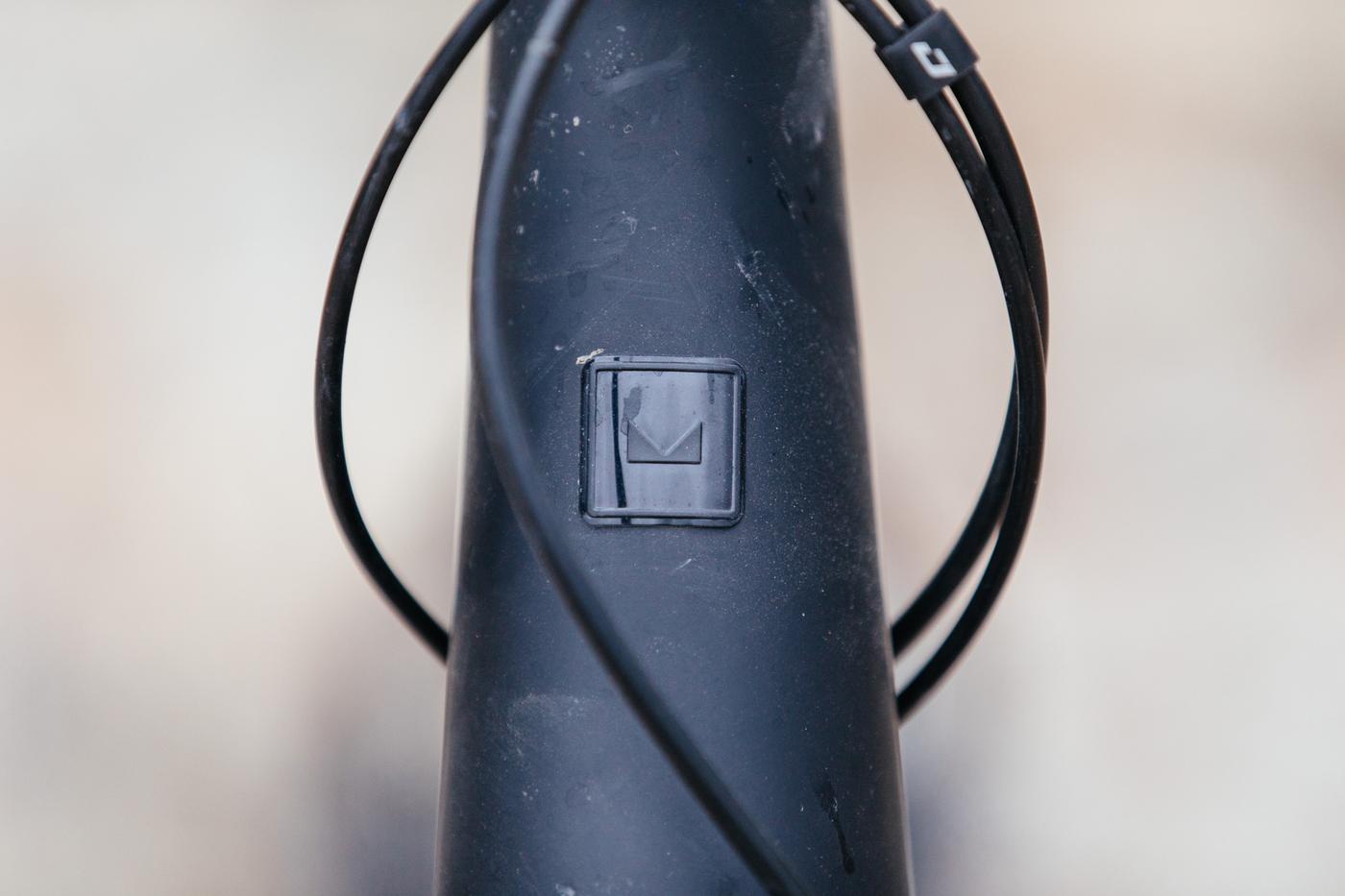 What Evil nailed on this bike:
-the name
-the raw carbon aesthetic
-the build kits
-the geometry
-the provisions for bottles, cargo bags, etc.
-the dropper integration!
-the price! when compared to other offerings in this market. 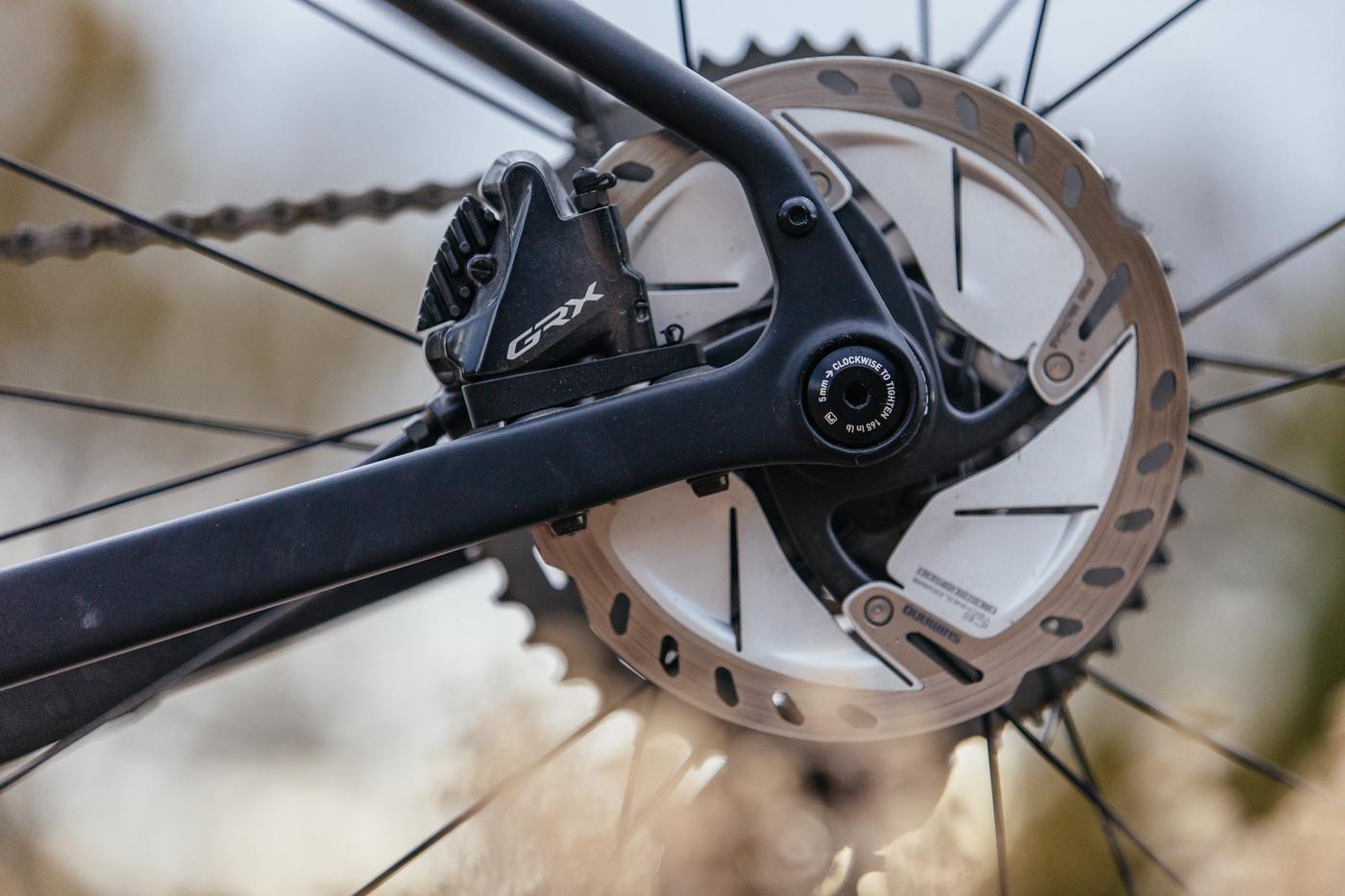 Got a bone to pick with this bike? Drop it in the comments. Got questions? Drop them in there too. Hate my review, lemme know! ;-)

Any other questions can most likely be answered at Evil-Bikes.com