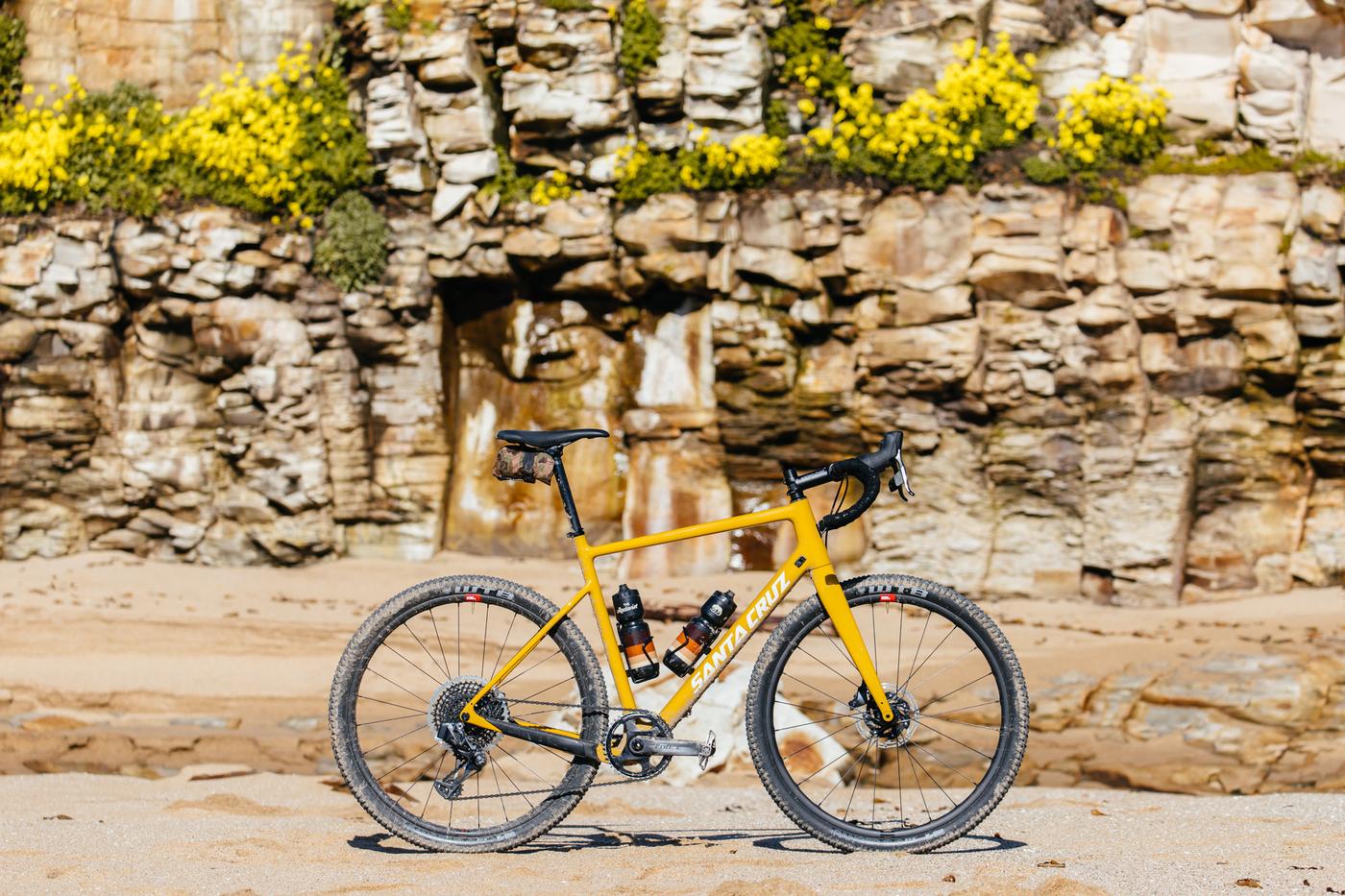 The Stiggy Strikes Back

A lot has changed in those four years. Other mountain bike brands – that’s what Santa Cruz Bicycles is first and foremost, a mountain bike brand – have developed their own all-road bikes and honestly, the Stiggy got left in the dust. In the era since the Stiggy resurrection, the 27.5 wheel platform has really taken over, allowing riders to experience the comfort found in a plump, or as I like to say, chubby tire. With what is essentially an XC tire from the 2000’s, you can now run higher volumes at lower pressures, providing damping from rugged roads without the use of elastomer posts, or stems, or other fancy contraptions. A 27.5 x 2.0″ wheel on an all-road bike is the icing on the gravel cake. Would you eat a gravel cake? I bet you would!

With the launching of their new all-road Reserve Wheels, we all could guess the Stiggy would return in both a 700c and 27.5 platform, we just didn’t know when, or what it would look like, or how it would clear those plumper, chubbier tires. 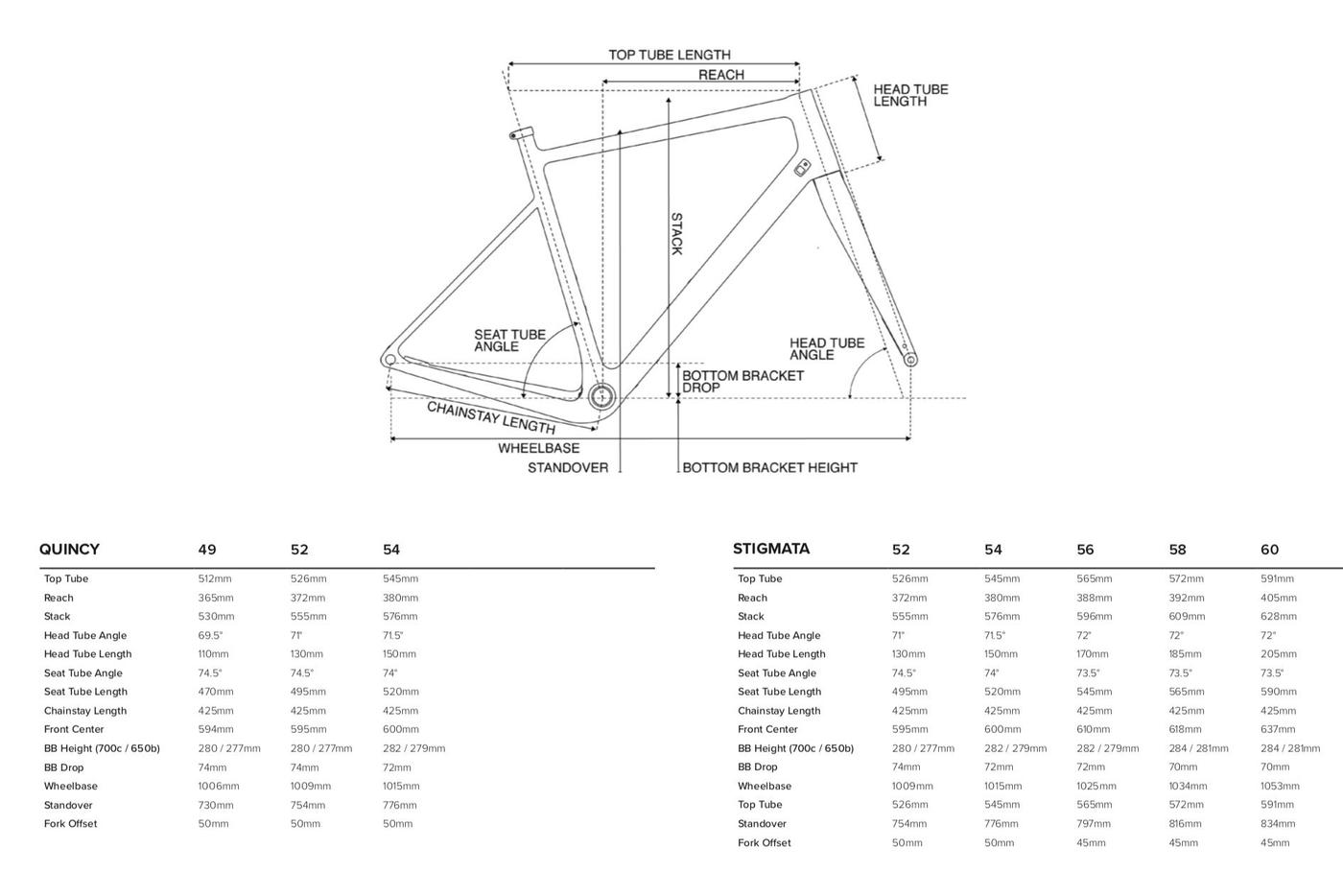 Don’t Call it a Cross Bike

The Stigmata’s geometry is more akin to a road than a ‘cross bike. With the 56cm frame – which is reviewed here – donning a 72° head tube angle, a 73.5° seat tube angle, 425mm chainstays, 72mm bb drop (a -3mm difference between the last Stigmata, which had a 69mm drop) and a 1025mm wheelbase, the Stiggy is tuned for off-road rallying, while still maintaining lines and comfort fit for asphalt riding. For this review, I chose the 27.5″ AXS build with the SRAM “Mullet” configuration of road shifters, cranks, and an Eagle MTB rear mech and cassette, delivering a massive 10-50t range. By the way, SRAM says these parts will be available for purchase to make your own kit at the end of June. 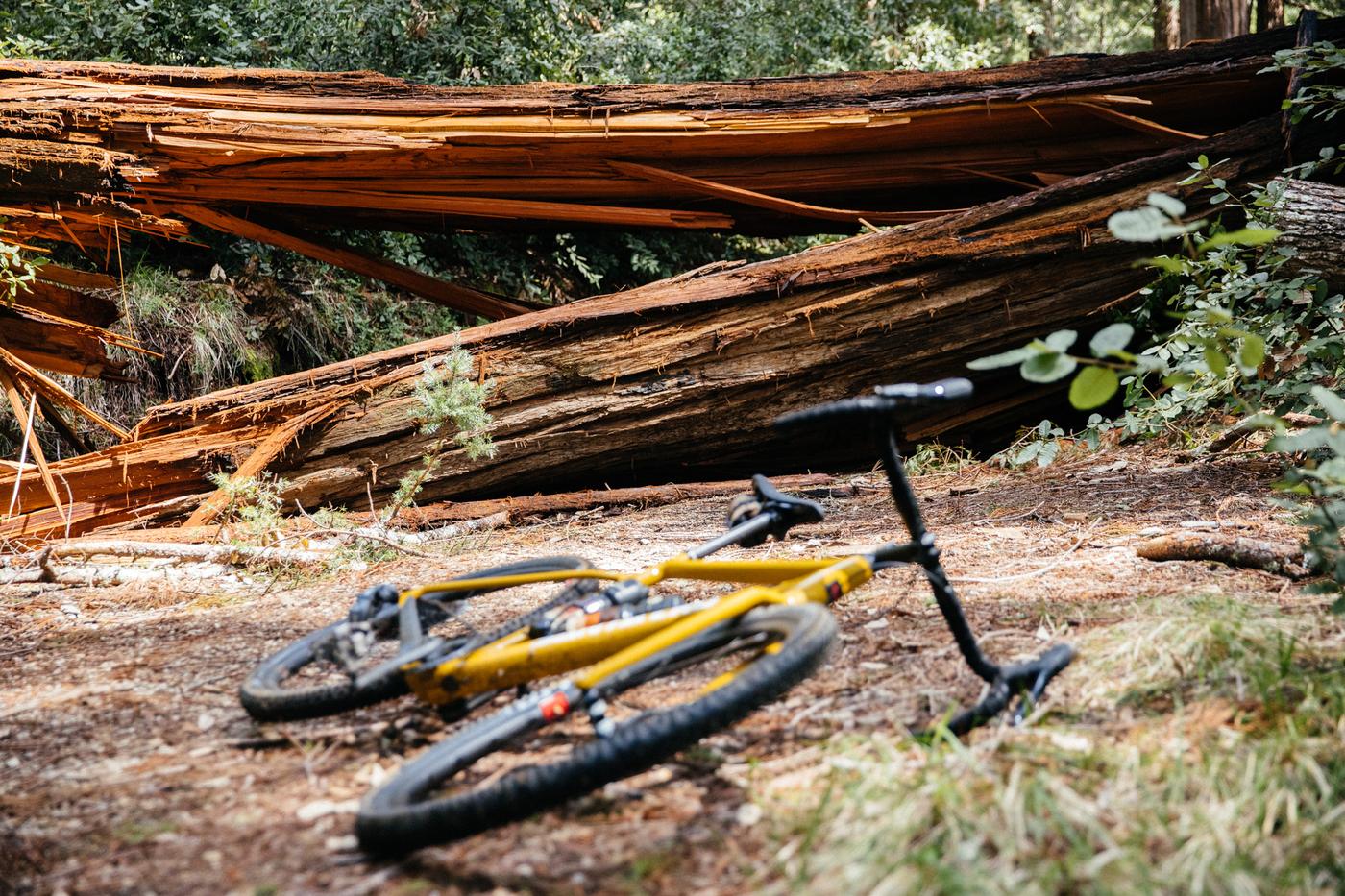 So What is It?

These days, all-road bikes are the veritable Swiss Army Knives of your quiver. With bigger tires and wider bars you get more confidence on the descents, or on your favorite ribbon of singletrack. Or you can strap bags to it and go bikepacking or touring. You can even race ‘cross on them – and many of the Santa Cruz employees do just that. Labeling these bikes as “gravel” bikes is short-sighted and oftentimes unintentionally confuses consumers. “Can I ride my gravel bike on the road?” I’ve heard that many times. Yes, you can… and much more. 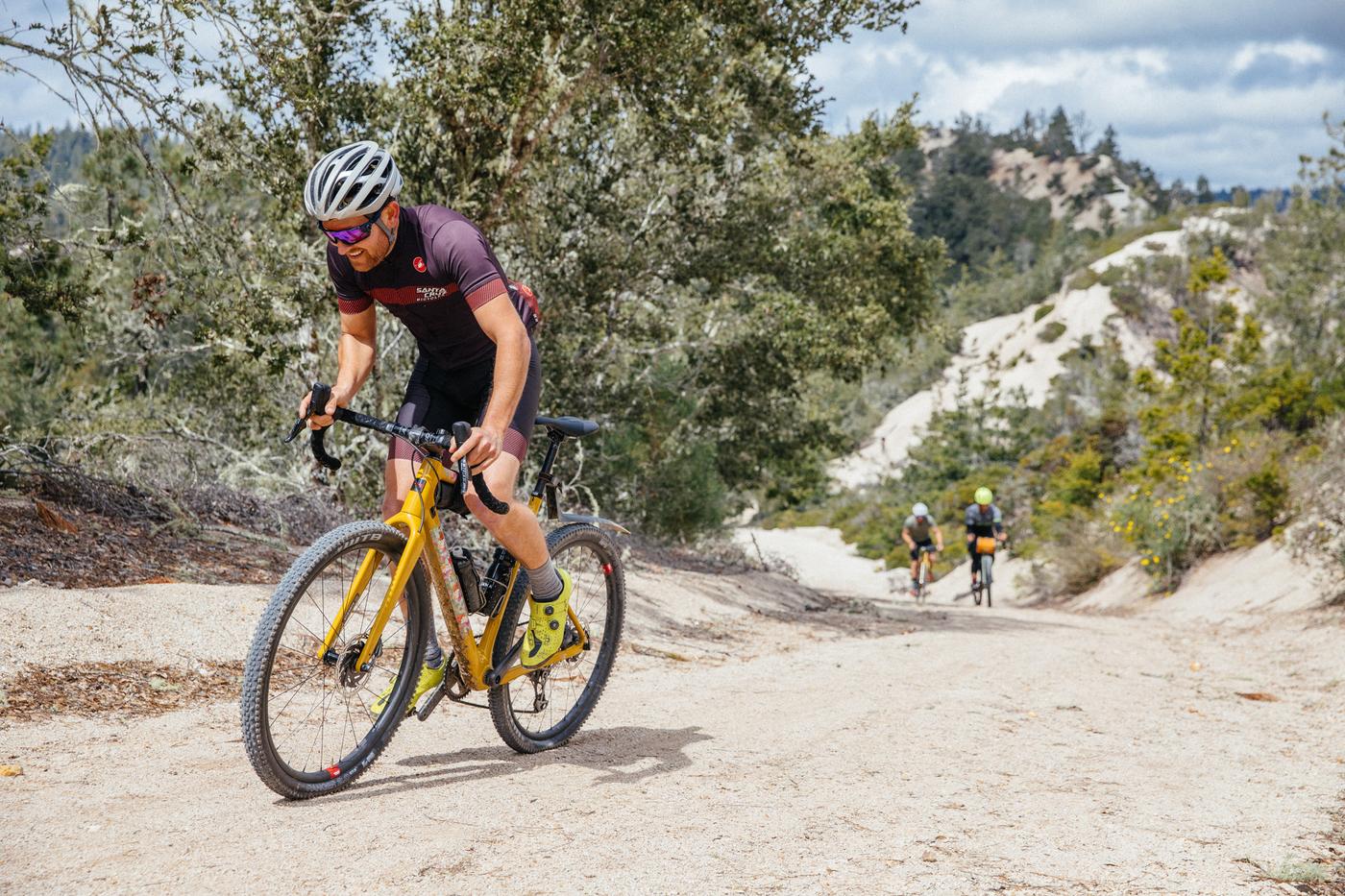 The fine folks at Santa Cruz took us on a loop through Big Basin State Park. It was a mixed terrain ride with road, dirt roads, and ‘is this even a road anymore’ roads marked with gopher pock marks and whippy, overgrown poison oak. I think I’m still itchin’ from this epic jaunt into the mountains above the Santa Cruz Bicycles offices. You can see a partial route at my Strava – my watch died five hours into the ride. 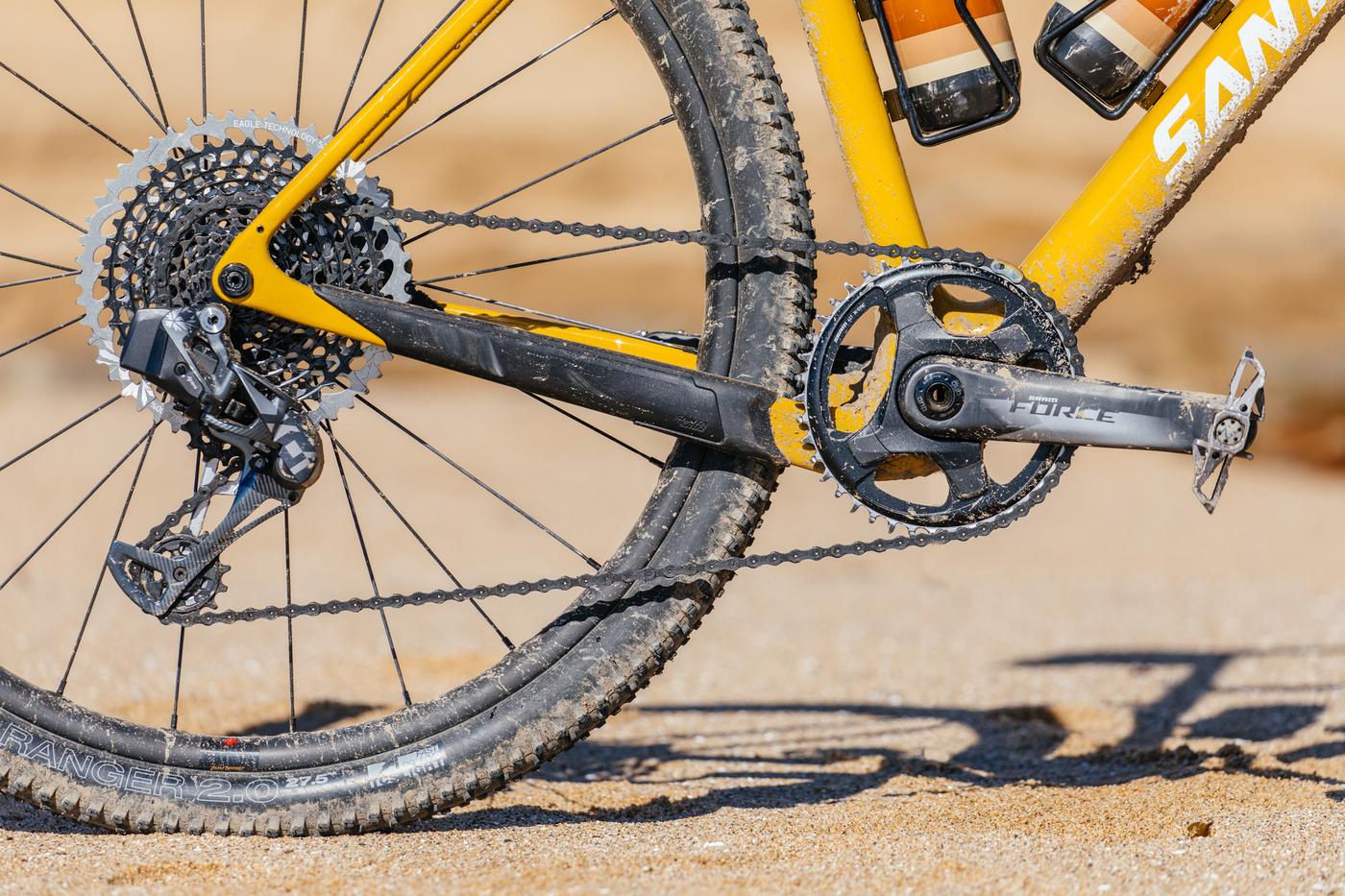 The Stiggy clears a 27.5 x 2.0″ tire (maybe even bigger depending on the tire’s size and tread) with a 1x or 2x drivetrain thanks to its gaping chainstay cluster, which is approaching the limits of maximum clearance. Yet with those aggressive WTB Ranger 2.0 tires, it clears just fine. There’s routing for a stealth 27.2 dropper, fender mounts, and a third bottle cage. Oh, and did you notice that Santa Cruz ditched the press-fit for a BSA BB? Hell yeah!

Other details were improved upon too, like the carbon layup, which is even lighter than the first Stigmata CC. My Force AXS 27.5 Reserve build came in at 19.16lbs complete, while the Red AXS 700c Reserve weighs a mere 17.22 lbs! The Stiggy frame and fork weigh 1570g. Damn. Speaking of the fork, yes it too was given an upgrade to match the flat mount frame. The Stigmata is available in various build kits ranging from Rival for $3599, up to Red AXS Reserve for $9899. 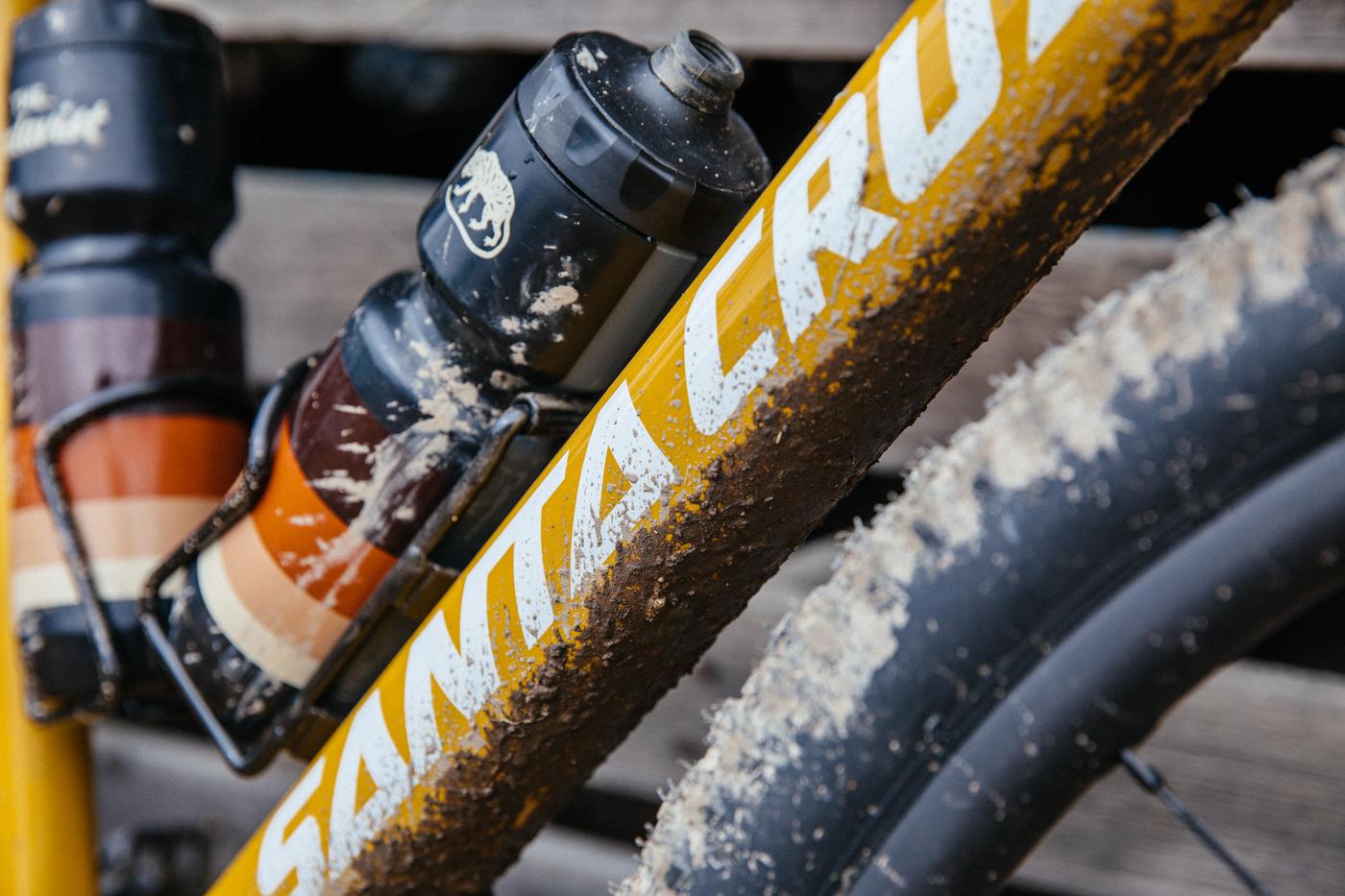 One of my favorite details about the Stigmata is the big downtube which acts as a fender in many cases. 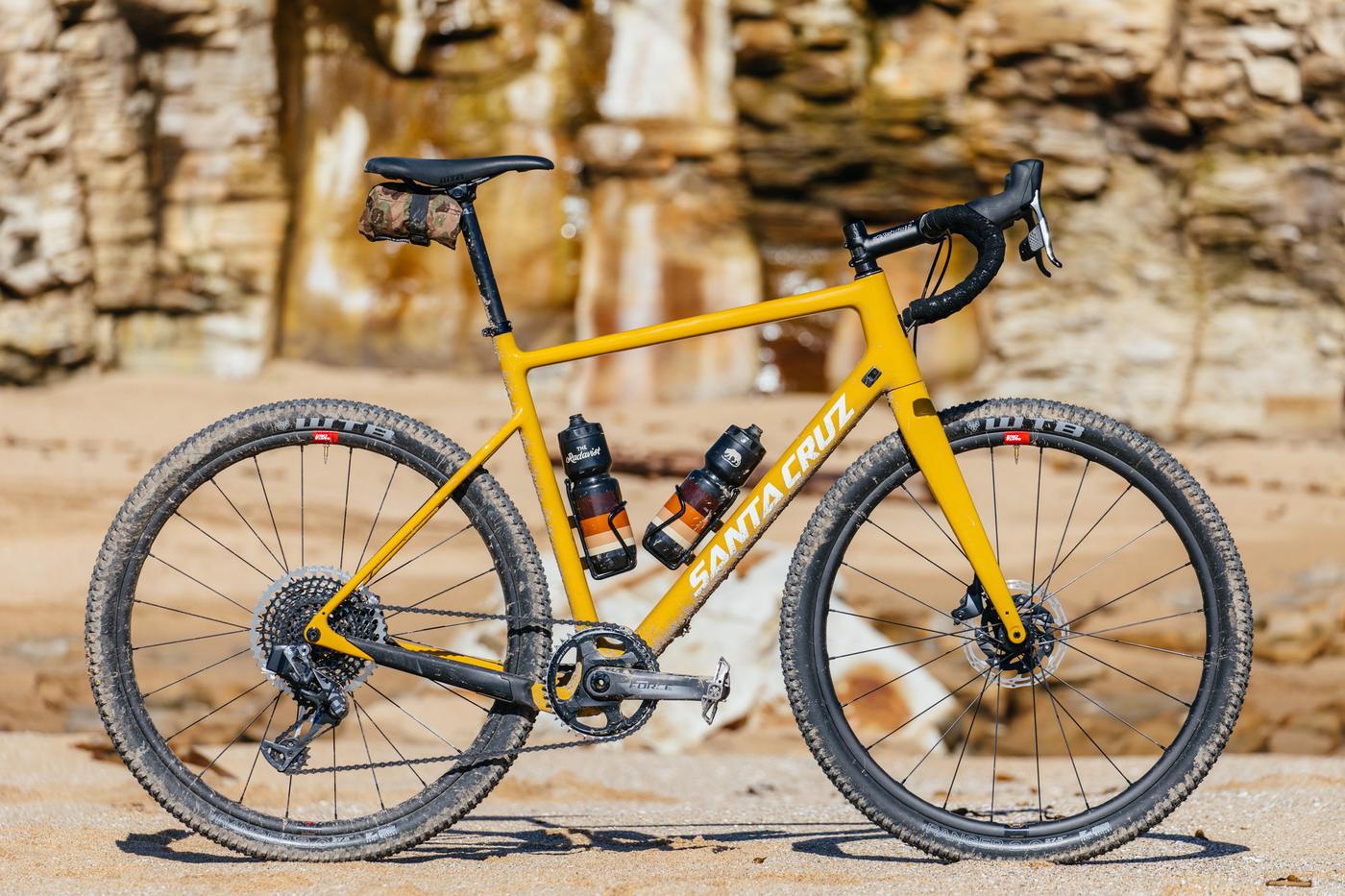 “If Ferrari made an off-road vehicle, that’s what it’d be like to ride the Santa Cruz Stigmata.” That quote is how I began my last long-term review of the Stiggy and it still holds true today, although, with the bigger tires, this bike rides more like a trophy truck than a supercar. I was amazed at how much different the CC layup felt. The old Stigmata, by comparison, was more chattery on rocky descents, yet the new model felt more alive. It felt like you were in control, not the other way around. I’m sure the wheels helped, and the wider bars, but damn, it was a noticeable difference. 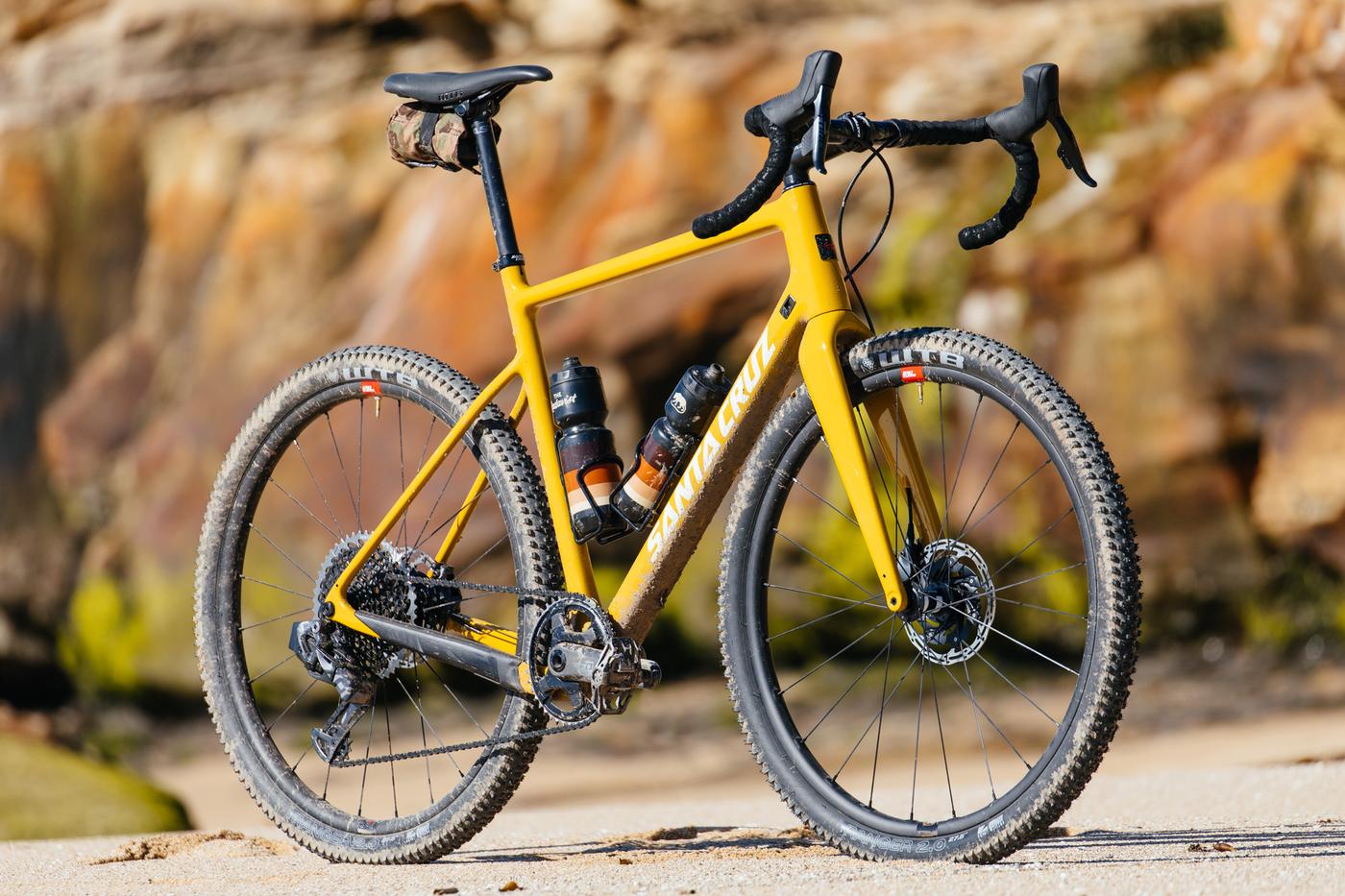 Look, in this marketplace, there are many all-road bikes to choose from, and I almost didn’t write this review because Amy touched on so many great points in hers, but I really love the Stigmata in its past and current form. There aren’t many critiques, other than the lack of 27.5 wheel options in the build kits. If Santa Cruz offers their other 29er/27.5 bikes with wheel options in each build kit – like the Chameleon – then why short change the Stiggy? The only 27.5 wheel option is a $5899 USD build, which really undermines the potential for this bike. If I owned one, I’d never put 700c wheels on it. How do I know that? Because I don’t own a 700c wheeled disc bike anymore. All of my drop bar disc bikes have smaller wheels and bigger tires. It’s just better, ATMO. That said, the frameset is available for $2299, so you could build it up any way you’d like. Also, an aluminum, lower pricepoint version would be well received!

The improvements in the Stigmata platform warrant an upgrade to your current Stiggy or if you’re looking for a carbon all-road bike, consider this an option. The new colors are crisp and while the paint might not be as blinged out as the Quincy, it looks damn good!

Check out more information at Santa Cruz Bicycles and see a Stiggy at your local dealer.