We can see our breath. It’s just getting light. I know I’ll be riding hard, but I still start in a down jacket, pants, and full-fingered gloves because it’s truly that cold. Jan and I look at each other through clear lensed glasses. We clip in, in front of the Maverick Motel and push our first pedal strokes. We glide down empty Main Street, under the overpass, past the bakery two hours before it opens, past the Mexican restaurants and tiendas, to the little gravel connector that looks like your neighborhood cut through to your friend’s house. It takes us to the OC&E Rail Trail. It’s paved for the first nine miles and then turns to crushed gravel– soft and then softer. There’s frost on the long green grass. The sky is pink and blue and we see the eclipsed moon. 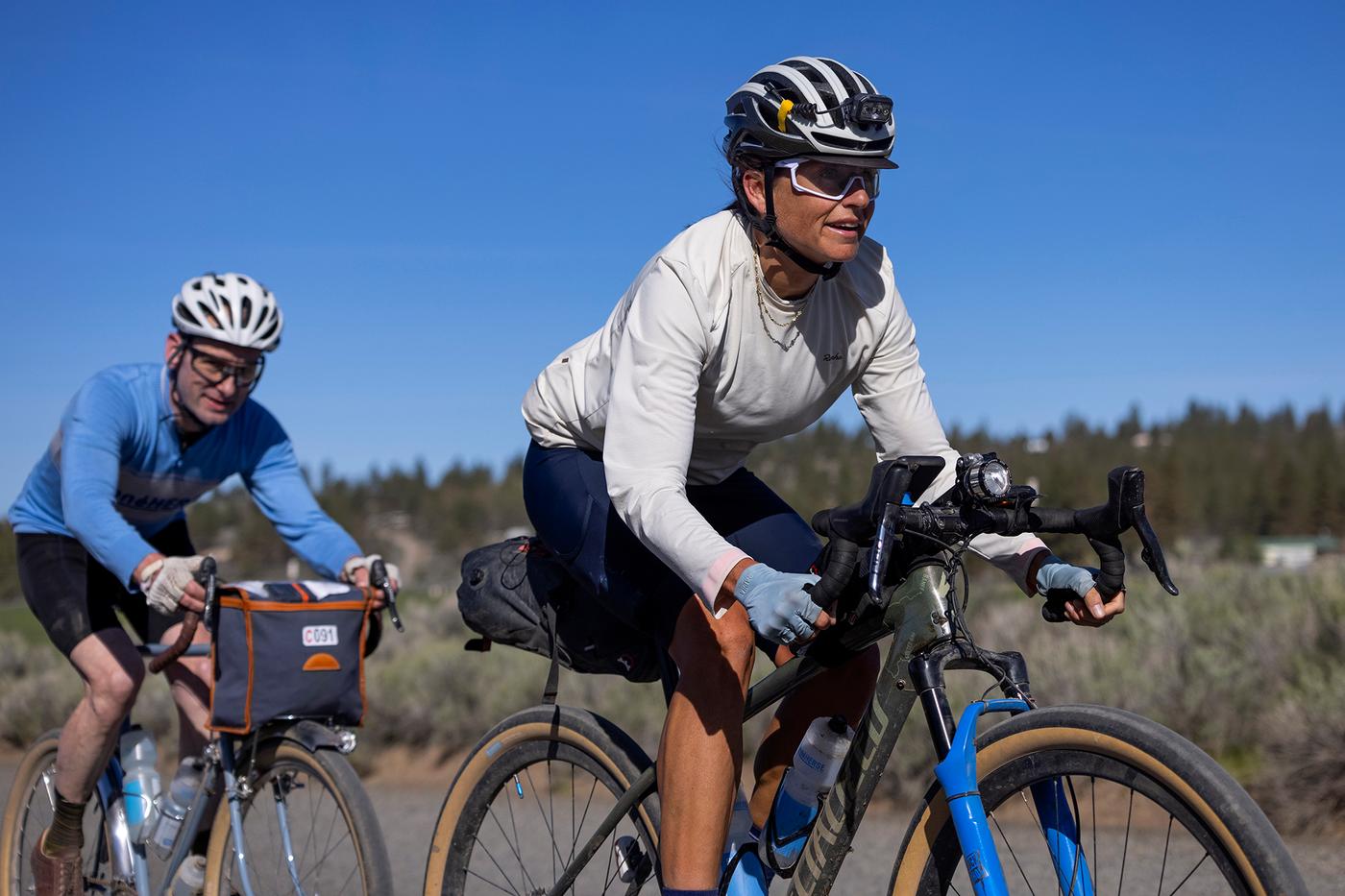 Shawn at Ruckus Composites told me to look out for it. He also told me that NASA conducted camps in Eastern Oregon to prepare for the Apollo Missions in the ‘60s. Any time I tell people that we’re riding the Oregon Outback they talk about the Rajneesh, a mystic from the ‘80s recently revisited by the Netflix documentary “Wild, Wild Country” or the Cowboy Dinner Tree where you order a 30 oz steak or a whole chicken (no sharing, no exceptions) or that there’s no water out there. This is high desert, sagebrush, wide-open land. It’s remote and peaceful. This is cattle country– within the first 72 miles, there are 42 cattle gates. Jan and I take turns opening gates for one another. We’d planned on riding together, but as the miles progress, I find myself waiting at gates for Jan to pass through. I’m not good at waiting when competition is involved. I always ride with my whole heart, even if I’m not feeling my best. I make it to the end of the OC&E trail, put in my earbuds, and take off up the paved climb. I’m having the time of my life.
Jan Heine and I started talking about tires in 2017. We started working together in 2019 and collaborated on the Fleecer Ridge tires– 700×55 knobbies designed for the Tour Divide. I absolutely love them.

In early 2020, Jan asked if I’d be interested in riding the Oregon Outback and possibly attempting to break the FKT. COVID altered most of our 2020 plans– Rue and I went home to Alaska in May and stayed through November, focusing on riding from home and sharing that story.

In 2021, we came back to the Oregon Outback idea and made a ride and media plan to highlight the beauty of the route and our experience on it. Rue and I would tour the route together and then I’d go back for an FKT attempt with Jan. Rue would shoot the tour off the bike and the FKT from a truck and e-bike and we’d pass the footage on to Global Cycling Network to be pieced together as a documentary for their new platform, GCN+. And that’s what we do! Rue and I tour the route over six days. We schedule an event at The Good Bike Co. in Prineville, Oregon, and ride two big days to get there in time. We camp in the picnic area in Shaniko and stay at the Motel in Silver Lake. We try to make dinner reservations at the Cowboy Dinner Tree, but they are all booked up, so we eat instant potatoes instead. A winter storm rolls in and we get snowed on and hailed on and we stay warm drinking hot chocolate in our little Big Agnes Fly Creek tent. We both download Stephen King’s “It” audiobook and spook ourselves riding the red sauce, the route’s nickname for the loose red soil. It’s a hell of a lot of work to grind through this route and the colors are spectacular– red roads and green pine. The trees are tall, but not thick. Sightlines are long and expansive. There’s a lot of space to dream and breathe.

Rue and I finish our ride in Klamath Falls in pouring frozen rain. We’re too late to pick up the rental truck, so we have to spend the night at the Maverick. I’m super bummed that we miss Gabe Tiller’s trail work day in Dufur. He’s doing an exceptional job building and maintaining the Oregon Timber Trail, a 670-mile singletrack route across Oregon. I really hope to ride it in the next couple of years. We drive back to Mosier, on the Columbia River Gorge, to celebrate my Aunt Mary’s 70th birthday and go for a bike ride with her girlfriends, grandchildren, and my cousins. It’s the first time they’re all getting together since before COVID. This is a really special time we’re all living right now.

For the next week, I focus on family time– riding with the little kids and spending time talking with the adults.
Jan takes the train from Seattle and Rue drives us back down to Klamath Falls. It’s time for the FKT attempt. 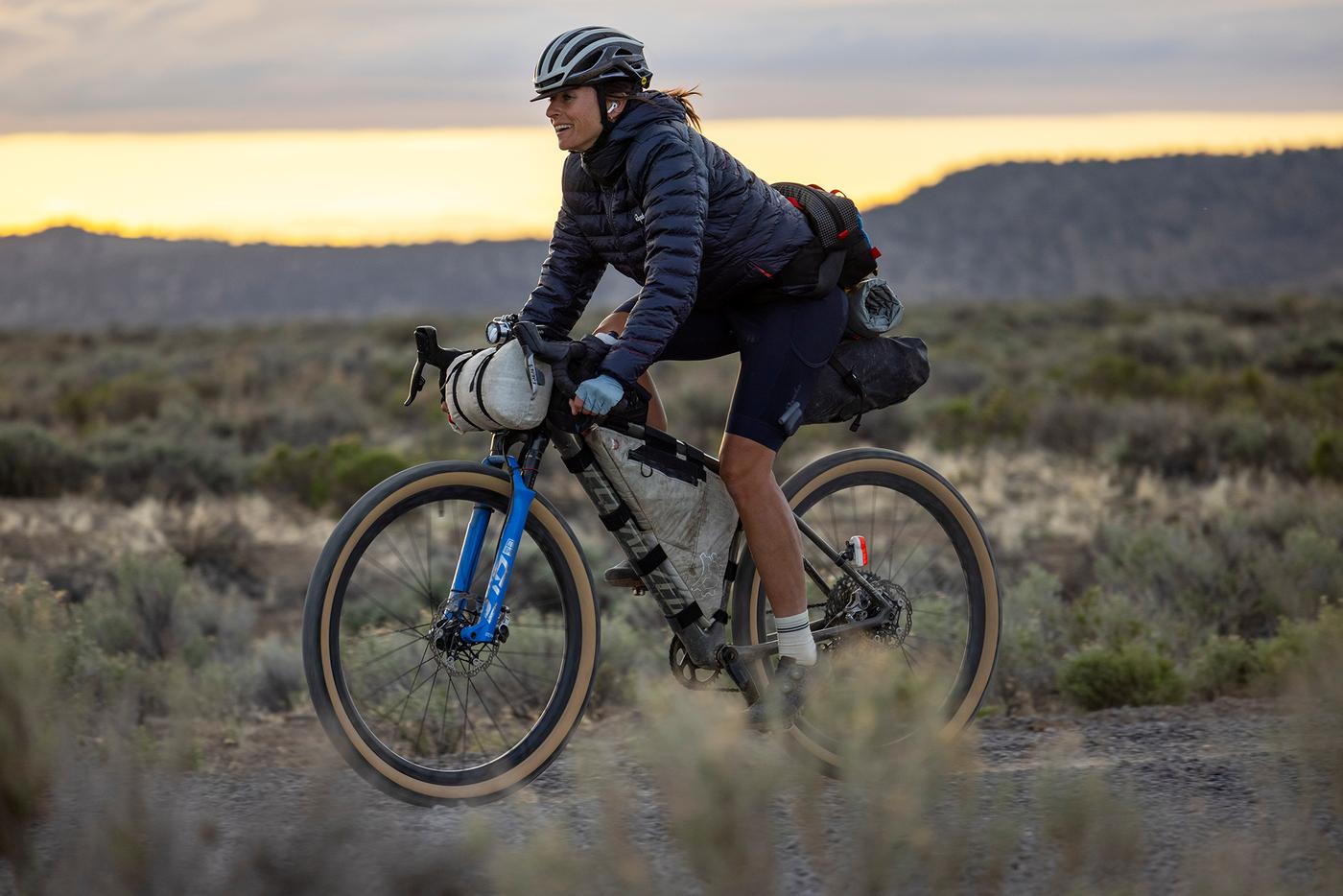 In the end, I ride for 28 hours straight and miss Stephen Hartzel’s record by 31 minutes. Where do I lose the time? I stop to talk with a family for about half an hour. They’re huge Jan Heine fans and brought drinks and snacks for us near the Crooked River. I definitely don’t regret the time– they have wonderful stories. The wife is the tandem national champion. She raced the Iditarod blind. Their little son wants to ride the Oregon Outback. He makes sure I notice that they brought fruit and I stick a banana in my jersey pocket. These folks are gems and kind people are more important than a stopwatch. I get super sleepy in the night and slow down on the descents. I just can’t keep my brain alert. When the sun comes back up, I feel so rejuvenated. That’s how it goes. I gave it my best and I’m proud of my ride. We wait at the Deschutes River State Recreation Area for an hour for Jan to finish. We all pile into the truck and drive to the closest diner for burgers. On our way back to Seattle, we stop at Breadwinner Cycles to meet and interview Ira Ryan and Stephen Hartzel for our GCN+ documentary. Ira set the first FKT on the Oregon Outback in 2014 at the Grand Depart. Stephen was there that year and toured the route over several days. Last year, he went back and broke Ira’s record. It was his first time to ride through the night. What an impressive beginning!

When asked about the difference between touring and FKT attempts, Stephen said he loves how he can point out all the places he camped while touring as he blows past them in one go during a time trial. Those memories stick with us and the route becomes special through shared experiences. Seeing the same roads on different days with different conditions gives it a richer feeling overall. I asked Stephen if he has any other routes he wants to time trial. There’s another one in Oregon that’s much more mountainous. He’d also like to ride longer distances but would have to factor in sleep and that’s a whole other monster. I bet he’ll do it. I’m looking forward to hearing about his experiences and seeing his results.
The day after we got back to Seattle, Rue and I got married. The day after that, we flew to Denver for a photo and video shoot for Rapha Women about the Trans Am with Stephanie Puello and Krystal Salvent– two heroes organizing the Denver chapter of Black Girls Do Ride– absolutely check out what they’re doing if you haven’t already.
Yesterday, we drove from Boulder to Emporia, Kansas and tomorrow I’m racing Unbound XL, 355 miles of rough gravel in the Flint Hills of Kansas. I’ve been trying to get as much sleep as I can and I’m thrilled to get out and race head-on. I’m still riding my Specialized Epic HT with drop bars. The one custom painted by Erik Nohlin for the 2019 Tour Divide. I’ve traded my slick tires for knobbies and I won’t carry as many layers because it’s hot as hell in Kansas. I’m hoping for the best and really just happy to have the opportunity to get out on my bike for another huge ride.

Rue and I fly to Switzerland the following day to get ready for the Hope 1000. We’re both thrilled to be going back to Europe!