We wake up with dew covering our tents and sleeping bags just on the south side of La Manga Pass in northern New Mexico.  We send Lael on her way as we start our seven-hour journey to jump ahead and try to catch Chris Seistrup at the head of the pack.  As we roll through the outskirts of Albuquerque it seems impossibly hot after almost two weeks high in the mountains.  As we approach Silver City a massive monsoon is building up over the Gila National Forest, no chance the leaders are staying dry out there.  Over a late dinner, we watch Chris’ spot tracker go stagnant and decided to wait until he rolls into town in the morning. 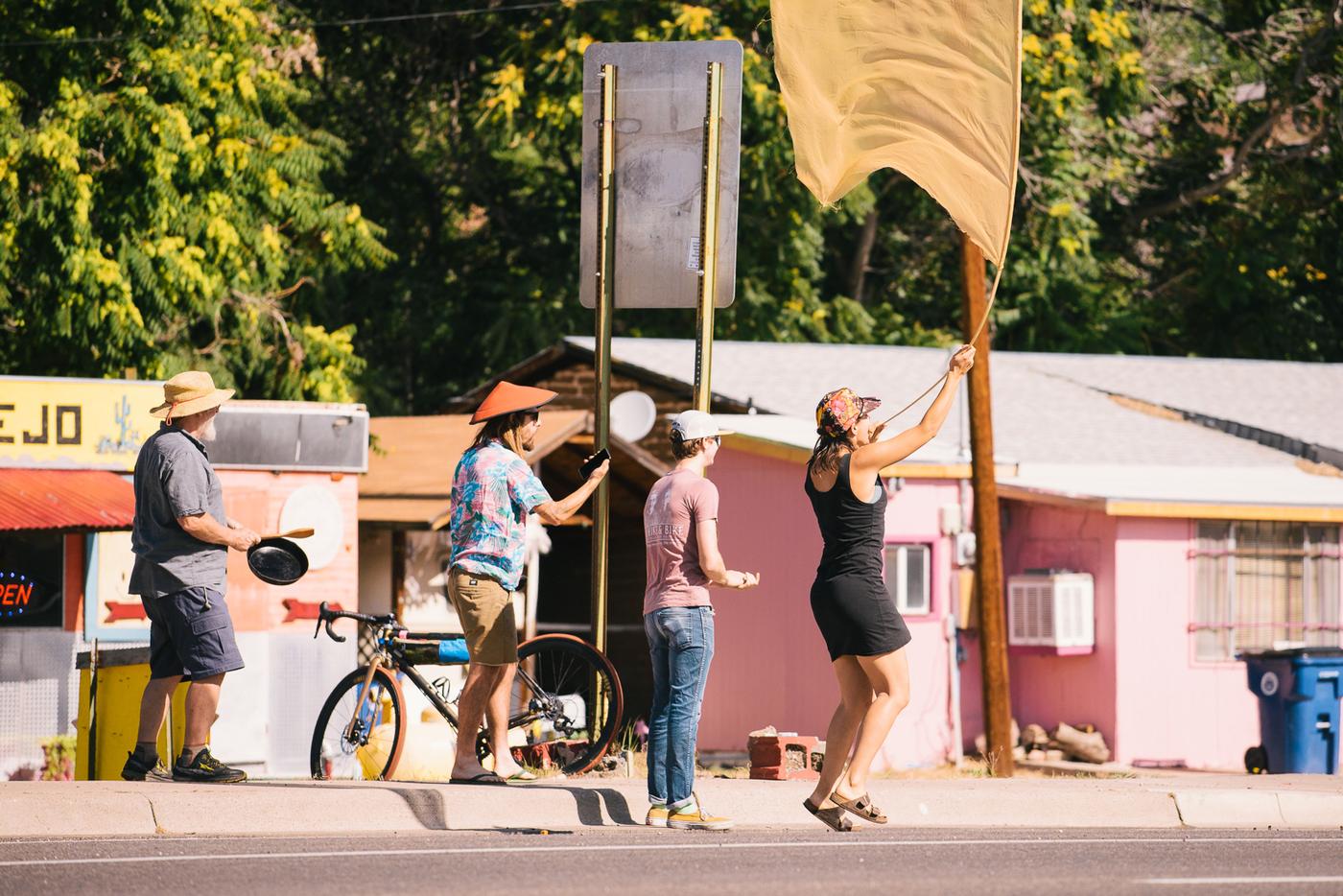 We run all over town trying to find him along the route until we notice a conspicuous bike parked outside of a Denny’s.  We decided to give him some space with his two breakfasts and go meet up with a group of rabble-rousers preparing to cheer Chris on as he leaves town.  When Chris finally rolls past he gets the finest cheering Silver City has to offer; flags, music, cast iron bagging, and plenty of good ole yelling.  We follow him until the road turns to dirt and he heads out into the vast southern New Mexico desert. 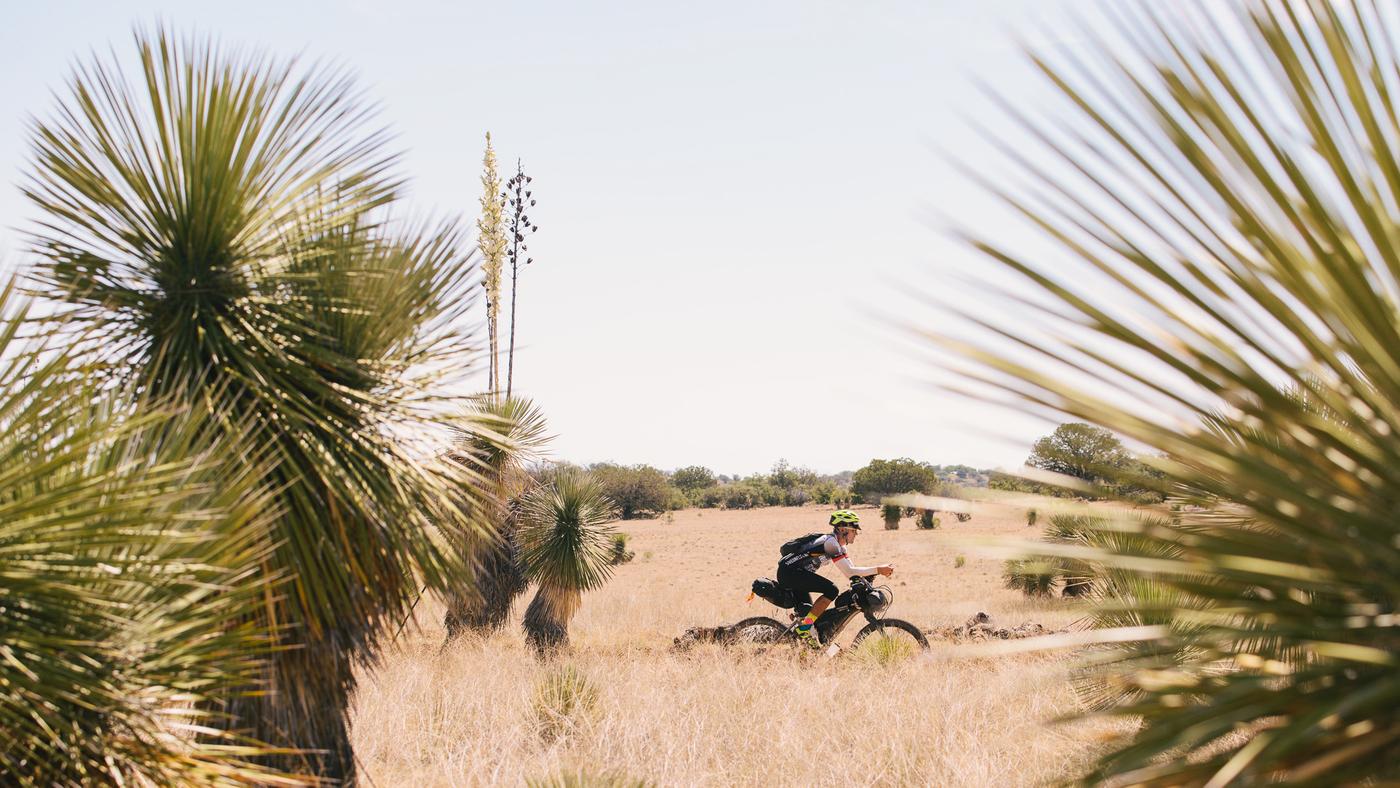 We catch him again in Hachita, NM the last stop before Antelope Wells.  We find him eating a popsicle and talking about everything he has lost riding on washboard roads.  A local girl helps him fill his bottles and hose him down before his final 45 miles to the border.  He looks as happy and strong as he ever did, maybe just a good bit skinnier.

Just after Chris leaves, a man rolls up and asks if Chris had already left. Turns out it is Jeffery Sharpe, Hachita’s local trail angel, he invites us back to his bike ranch just up the road.  He shows us around his spot and the few rooms he makes available for hikers, bikers, and hunters.   He regales us with tons of stories from past Tour Divide races before he urges us to head south to catch the finish of the race. As we reach the border we find a small camp of his friends and family awaiting his arrival at the border.  I pet the only resident of the town’s dogs and sit in the middle of the road waiting for him to roll into view.  The border station closes at 4pm so there is no traffic except those coming to see the finish.  Finally, a blip in the distance appears and Chris is literally on the final stretch.  He rolls straight into the arms of his wife waiting at the border fence, then over to the border checkpoint sign, where he would lay for the next long while.  Jeffery Sharpe presented him with his #1 trophy and his wife presented him with a LEGO trophy from his kids.  After a good rest, it is time for his wife to bring the scale and see how many pounds he has lost on the journey, as he steps up the scale reads eleven pounds lighter.  We give him some space to recover and be with his friends and loved ones, but later he posts a video, lit by headlights, of his proper victory dance at the border.

Chris’ time was 15 days, 11 hours, and 24 minutes, impressive for anyone, especially so for a rookie on the route. The next day we dropped Jay Richtey off halfway to Tucson so he could catch his flight back to Atlanta.  Then it was just me and Rue, and we book-it back around the Gila National forest up toward Pie Town to reconnect with Lael for her final few days of the route.  She was too fast for us to catch her at Pie Town, a fabled place I still look forward to visiting someday.  We catch her rolling through the alternating ponderosas and sage, both equally fragrant after the intermittent rains. Just before camp, we run into a few northbound motorcyclists and a local rancher on his ATV with two very nice dogs.  Tall white flowers line the smooth dirt roads and we find a nice open flat spot for the evening. 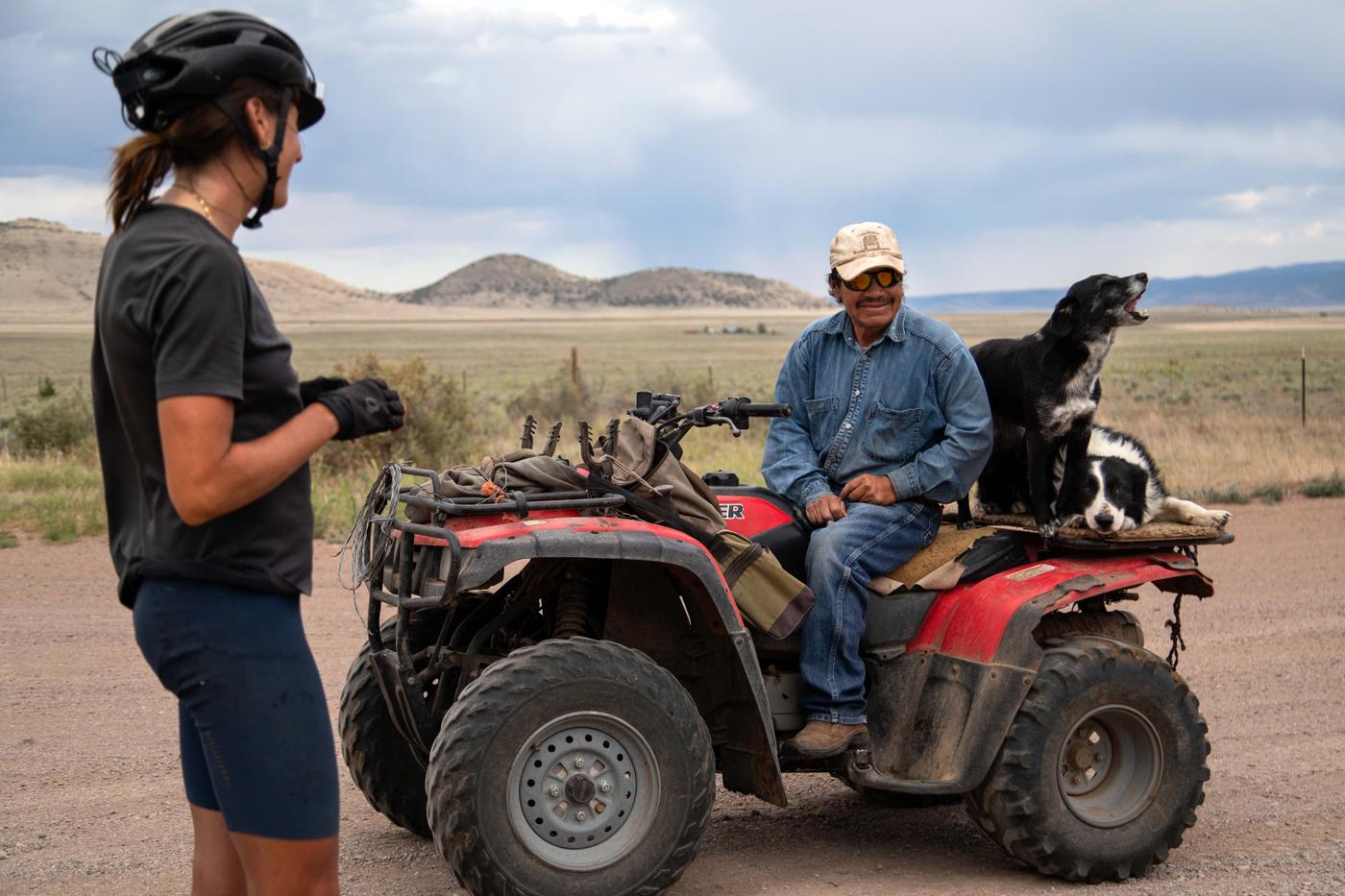 The next day is filled with wide open cattle pastures and higher elevation pine forests.  When we reach the Beaverhead workstation we turn off route to avoid a nasty section of trail through the Gila.  After grabbing some supplies in the ever unique Truth or Consequences, NM we roll over Emory Pass to reconnect with the route, another daily storm is brewing.  We catch Lael as she finishes the dirt section for the day, she has opted to skip the CDT hike-a-bike section for some choice road riding.  As the sun sets, it cast an amazing golden glow on a small downpour making the sky appear to be on fire.  Lael remarks about how happy she is to be riding pavement after 1000s of miles on washboard roads.  It’s a helluva climb into Silver City but she happily plugs on as the storm thunders nearby.  We meet up for the evening at Moné Bikes world headquarters, an old post office basement in Silver City.  Lael sets up her camp on the old loading dock for her final sleep before the finish. At 5am she wakes up to start the long and hot 130 miles to the border in Antelope Wells, hoping to beat the heat a little bit.  Sunrise is spectacular and illuminates all the blooming Yucca plants.  We skip ahead to a Denny’s in Lordsburg and watch her dot so we can catch her as she resupplies in Hachita. As we reconnect, we catch her in town to pick up some snacks and use the hose to cool off briefly as the midday temps reach over 100 degrees.  Now only 45 miles separate her from the finish of the ride.  She flies through the final miles in under three hours, so much so we almost miss her at the finish. We have just enough time to hand her a half melted ice cream cone out the window, its gets everywhere. 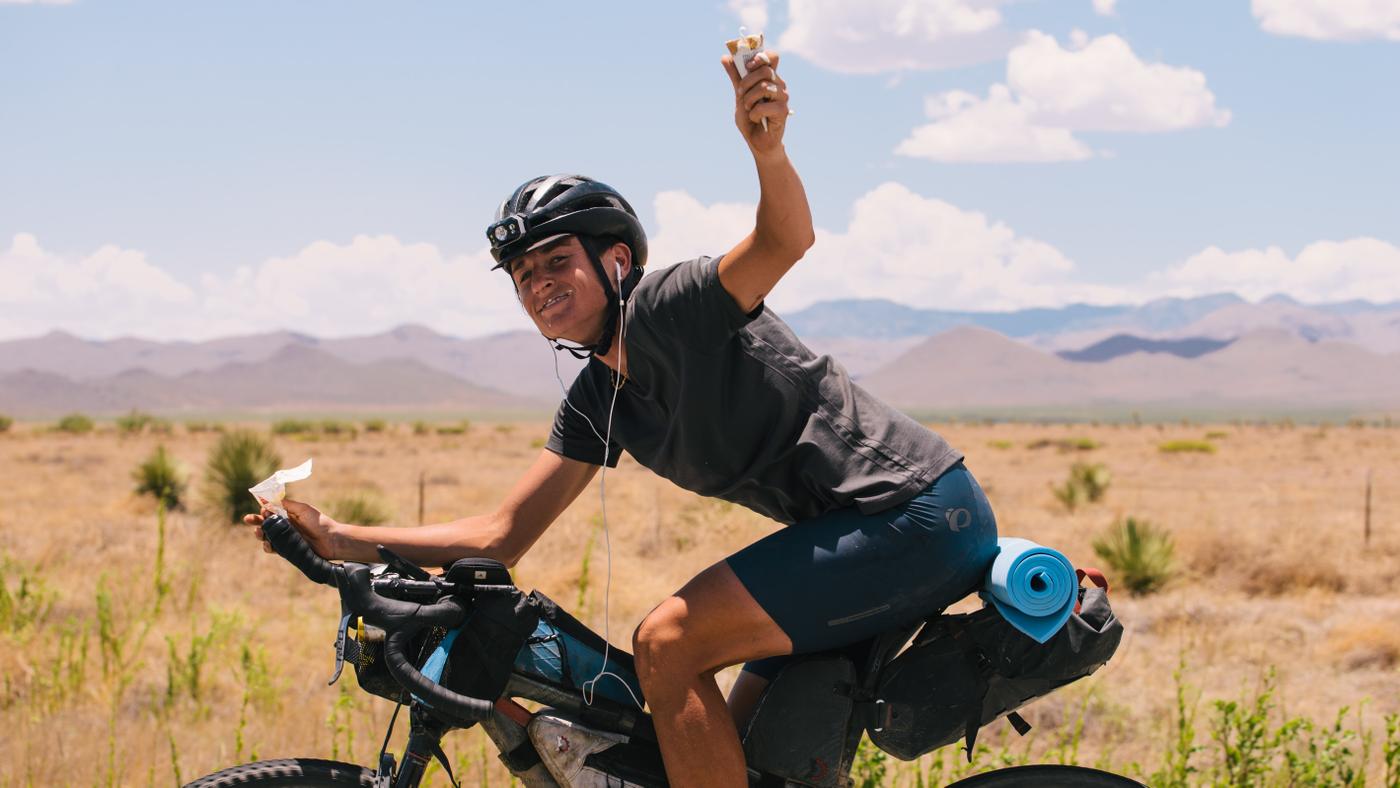 As she rolls around the end of the road, she remarks how good she feels, after scratching from the race she was able alleviate any pressure and made time for herself to sleep plenty.  She even says that she doesn’t totally hate her bike, a first for her at the end of the Tour Divide route.   We take some silly shots of her flexing and she finally gets to put on some fresh clothes for the first time in over 2 weeks.  She finished in 18 days, although “taking it easy” her pace is still incredibly fast.  This ride hasn’t gone as she expected in many ways, but she seems satisfied for the time being, nonetheless, she plans to ride the route again, the overall record still in her sights.