My dream was to ride all of the major roads in Alaska and I did in 2017. I’m fourth-generation Alaskan. It’s where I got into endurance riding on my mom’s Specialized Ruby in between bartending shifts in 2014. Examining the map and fitting in the biggest rides I could on my two days off led me to the goal of riding them all, imagining what the 2D map could look like in real life and why the roads existed in the first place. Three years later, I had a wide open summer and I was ready for an open-ended adventure. Four thousand five hundred miles took me past Wiseman to the north slope at Prudhoe Bay on the Arctic Ocean, through Chicken to Eagle on the Yukon River, to the three hot springs north of Fairbanks, into Denali National Park and across the Denali Highway to Paxson. I used The Milepost, the local guidebook that chronicles every mile of Alaskan road with conditions and services. If the road is listed in The Milepost, I had to ride it. About two-thirds were paved and a third, high-quality dirt.

I relentlessly connected the dots and when I reached the end of the road, I’d turn around and start pedaling back. I figured I wanted to ride all of the roads, but I didn’t have to ride them both directions. I hitched with a French tourist circumnavigating the globe, with a pastor from Zimbabwe driving from home in Valdez to Anchorage to fly back to Africa to visit family. He sped and cornered like a race car driver. I got a lift from a Bush plane pilot out of McCarthy and sat in the back of an ATV trailer with a fellow called Eight Ball that showed me his favorite lookout into Gates of the Arctic National Park. He told me not to tell anyone where it is, so I won’t. An ice road trucker named Colin took me back from Deadhorse. I’d ridden through the night to get there. The cab of his truck had a full-sized bed in the back. I slept while he drove. After four hours, we stopped for burgers at the Trucker’s Cafe in Coldfoot. I slept another four hours to the entrance of the Dalton Highway. My mom met me there. She was also born in Alaska and had never been this far north. For this stretch, our plan was to drive out to Manley Hot Springs together, stay at the Roadhouse and I’d ride back. On the third of July, the bar was packed. The water coming from the sink was red with iron. There’s no cell phone service, but there’s a landline with an index card on the wall to call Gladys about the hot springs, so I do. She tells me you can reserve the hot springs for $10 for an hour. 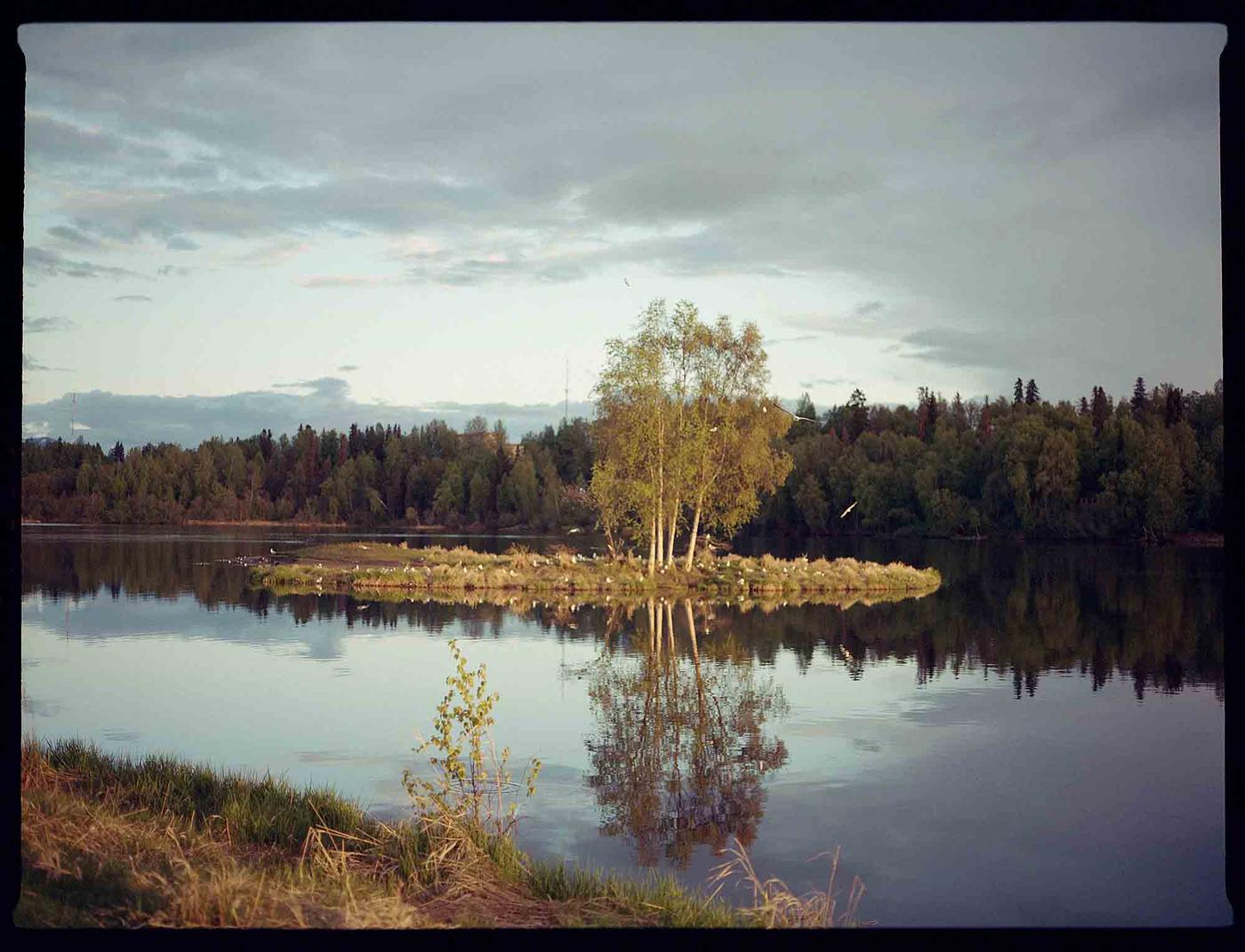 “Okay. You have to cross back over the wooden bridge to the log cabin on the left to pick up the key. Then back over the bridge and the building is on the right. Make sure to lock the door behind you.”

We follow the instructions. My mom turns the key on the door of a large shabby building. 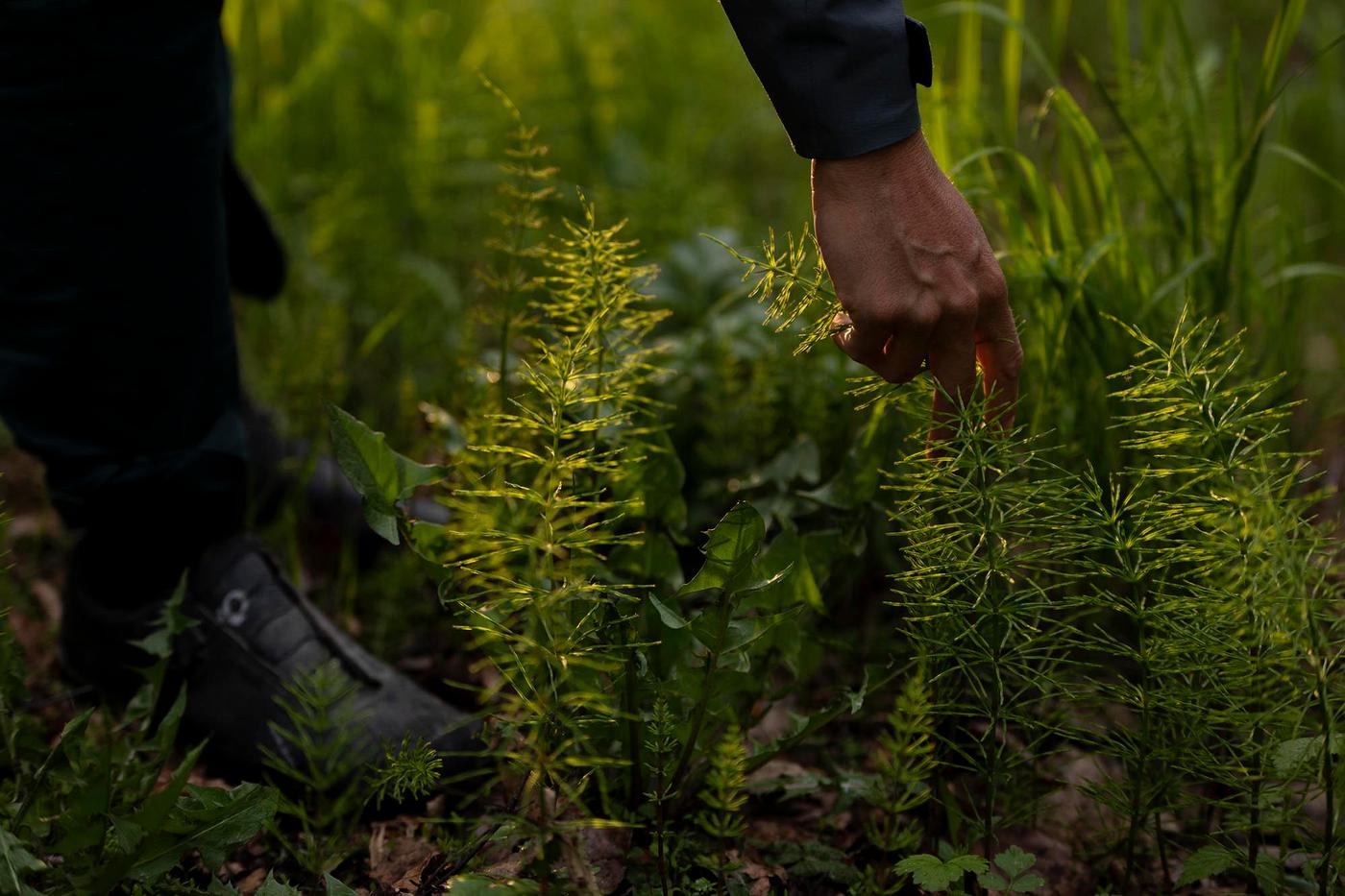 The roof is covered in green vines. It’s lush and humid. There are brightly colored tropical flowers and trees with broad leaves open to the sun streaming through the clear paned roof. There’s a sign that asks us not to pick the grapes and we don’t. It can be -60F (-51C) in Manley Hot Springs in the winter. The hot springs is a greenhouse, using thermal water to warm the building all through the winter to allow for this growth. I imagine coming in from the frigid winter cold into this oasis. There are three steaming concrete tubs with pots of hanging flowers over them. We soak. 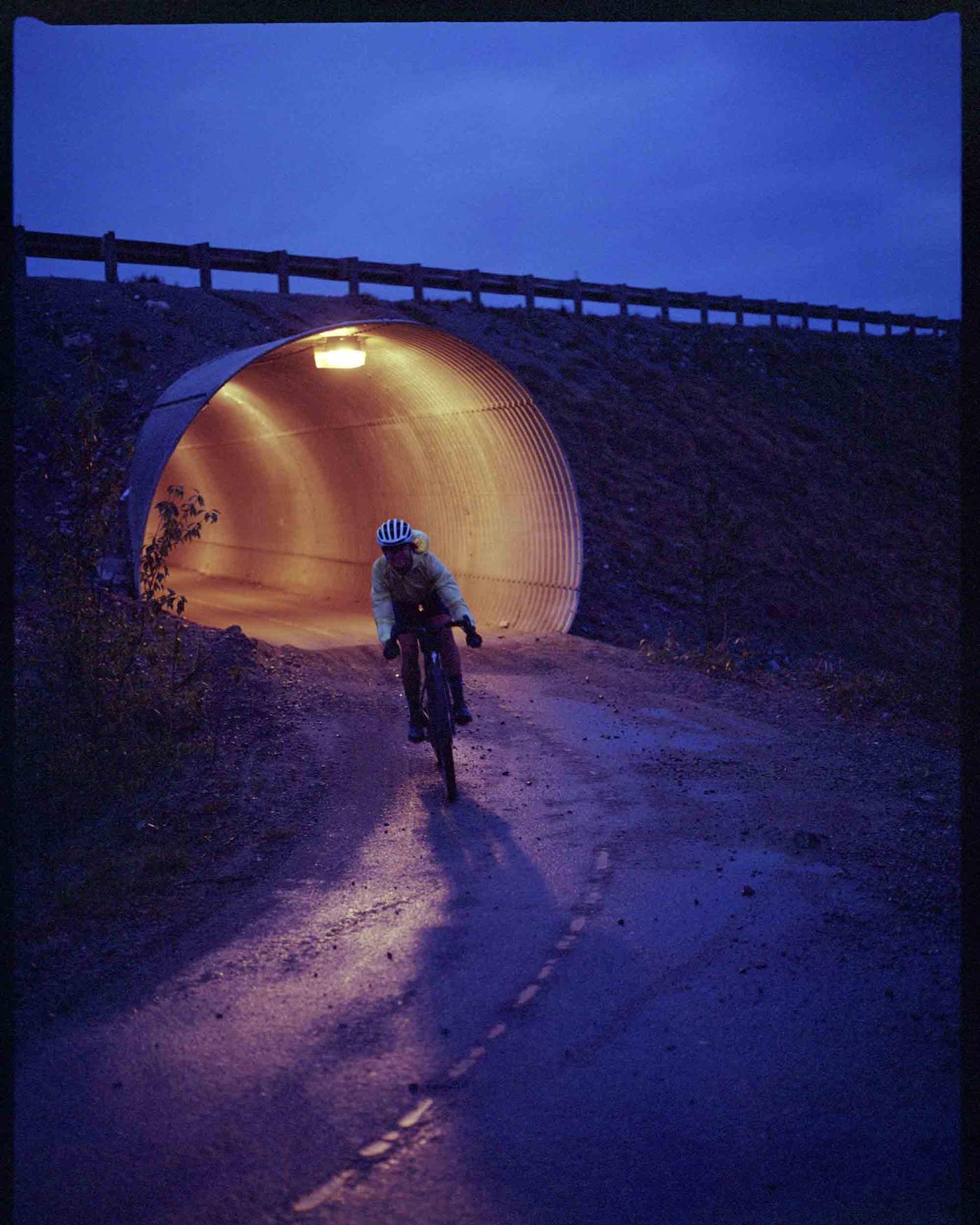 Back out on the road, we lock the door and return the key. I start pedaling east and my mom meets me at the turnoff to Minto. I wasn’t expecting another road, but if I see a sign to a destination, then I guess I just have to ride there. It’s a long descent to the Tolovana River. Minto is a small Athabascan village. For the fourth of July, there’s a boat race and games for the kids. As we pull up, a lady yells, “Clear out of the way!” 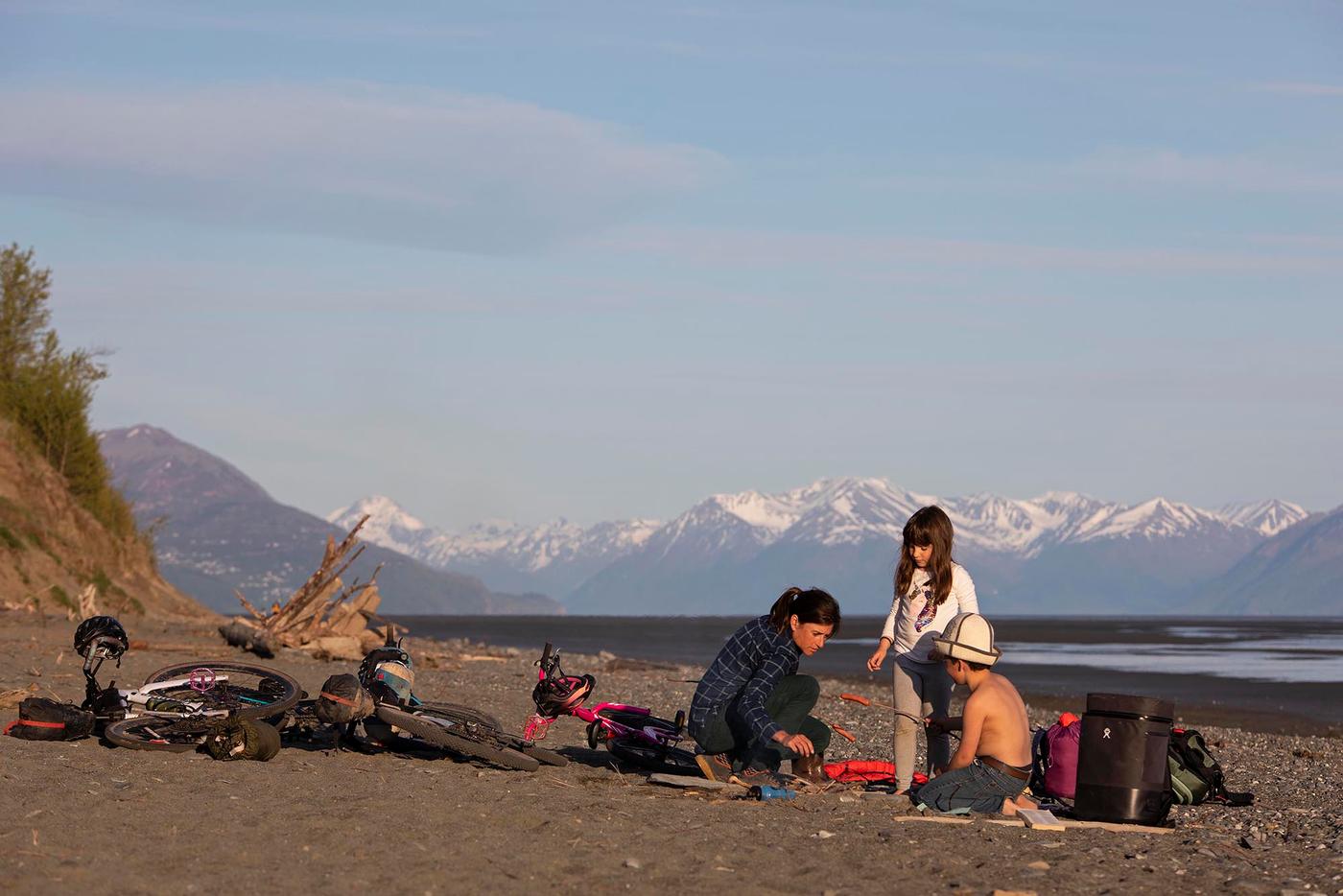 She throws a large handful of coins onto the dirt road and yells go!

Kids with face painted cheeks scramble for the coins. They’re laughing and cheering. We’re out front of the cafeteria. Inside they’re serving plates of ribs and corn on the cob, cornbread and baked beans. We have a plate and a Coke. I get back on my bike. We head towards Fairbanks. Tomorrow we’ll shoot for Circle on the Yukon River and the spur to Circle Hot Springs to find out they’ve been closed and abandoned for decades.

Every road in every era tells a story of history and change of animals and people and life. On a different day with different weather and different company, the experience would be wildly altered. 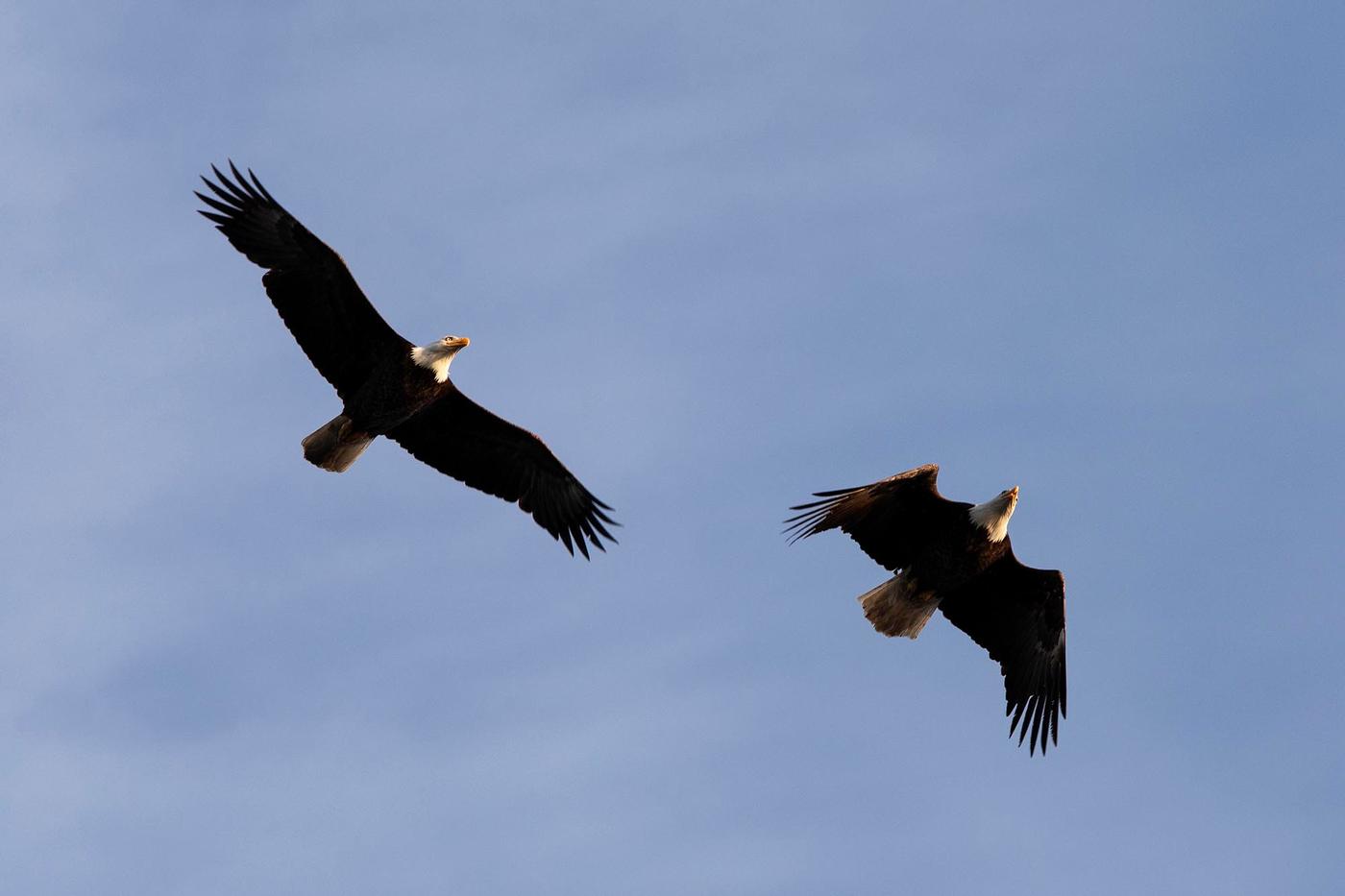 A few days later, I return to Anchorage to work for a couple of weeks at The Bicycle Shop to save money to fund the next leg of the trip. I fall in love with Rue. Seeing her photos inspires me to take my own for the first time– they look so real and essential. I get my first camera. I want to show people a little of what I’m seeing– what it looks like to ride north of the Arctic Circle at summer solstice, to see a herd of muskox near the pipeline and a red fox on the top of Atigun Pass. The snapshots are limited and don’t capture the feeling of the place. Rue comes out for a few stretches of road. I’m grateful for the photos she takes and even more that she’s with me for those rides.

Since I rode in 2017, I’ve been wanting to share the story of riding all of the roads. 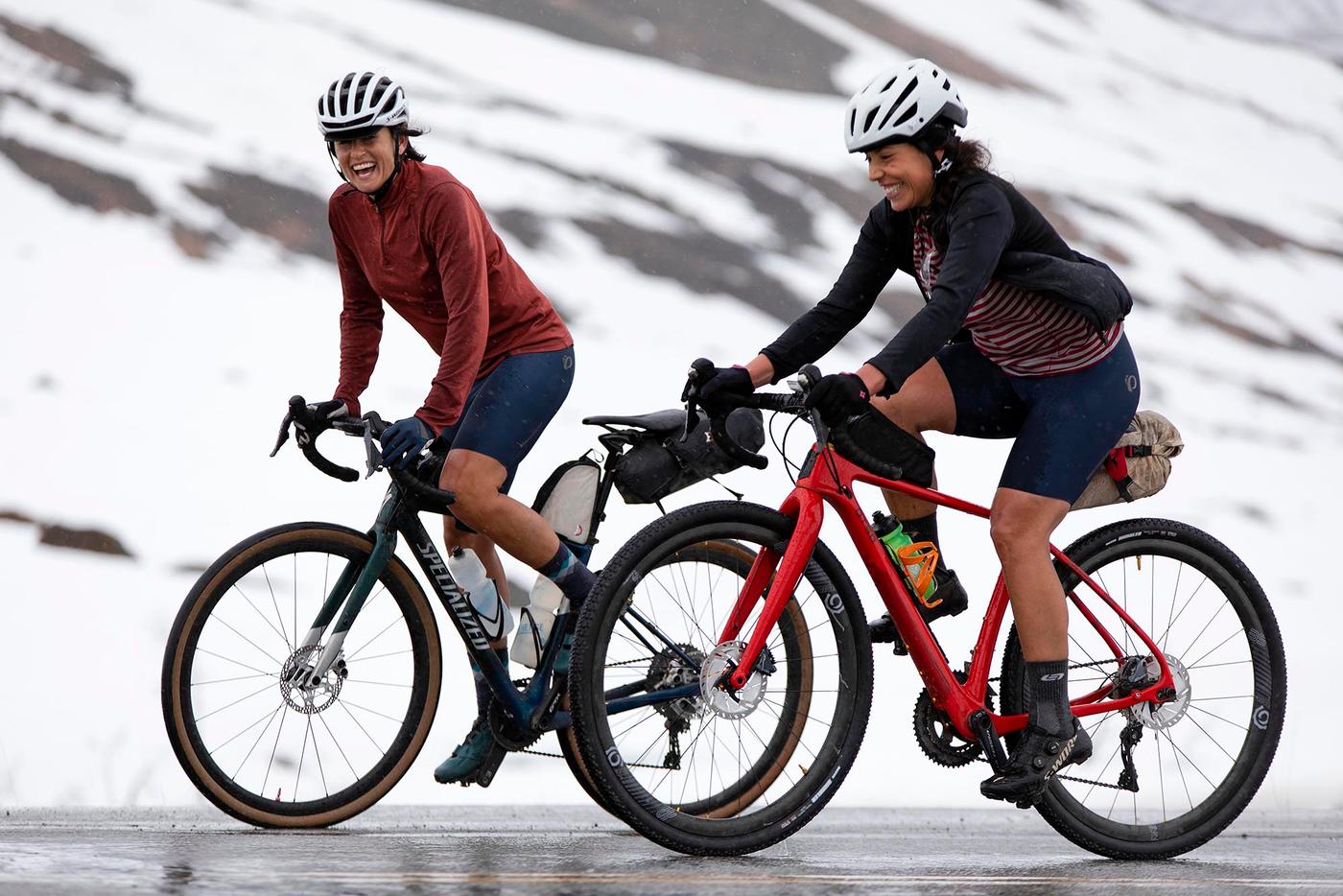 I’m back in Alaska this summer with Rue to do better together. We’ve been here for just over a month– I rode an Everest challenge on Hatcher Pass and out to my folks’ A-Frame in Willow a couple times. We went bike camping with my sister’s kids on the beach and out on the Denali

National Park Road on a clear day. I traveled north to Chena Hot Springs with my parents and then I rode home. We’re studying the map again, watching the weather and dreaming of all the places we can go. A big goal is to inspire others to start adventures from home. Rue will be making a full video to be released in April 2021. Throughout the summer, we’ll be posting monthly updates on our experiences and the equipment we’re using to accomplish this project as well as filling in an Alaska Roads Komoot collection. Seeing the road lines and the rides makes me want to connect all of the dots again. This time of year, there are over 20 hours of official daylight in Anchorage. Farther north gets even more. There’s time and light to fit it all in and I’m so excited for what’s ahead.

A huge thanks to PEARL iZUMi, Revelate Designs, Komoot, Easton, and The Radavist for helping us share this story.