Before I jump into how many of these parts were sourced at BICAS n shit, lets delve into the history of the fork for a hot second.  This fork is the brainchild of Darren Larkin, Crust’s numbers guy and creator of the Dreamer frames and other MUSA bits.  Here is his ramble about the beginning of the fork: 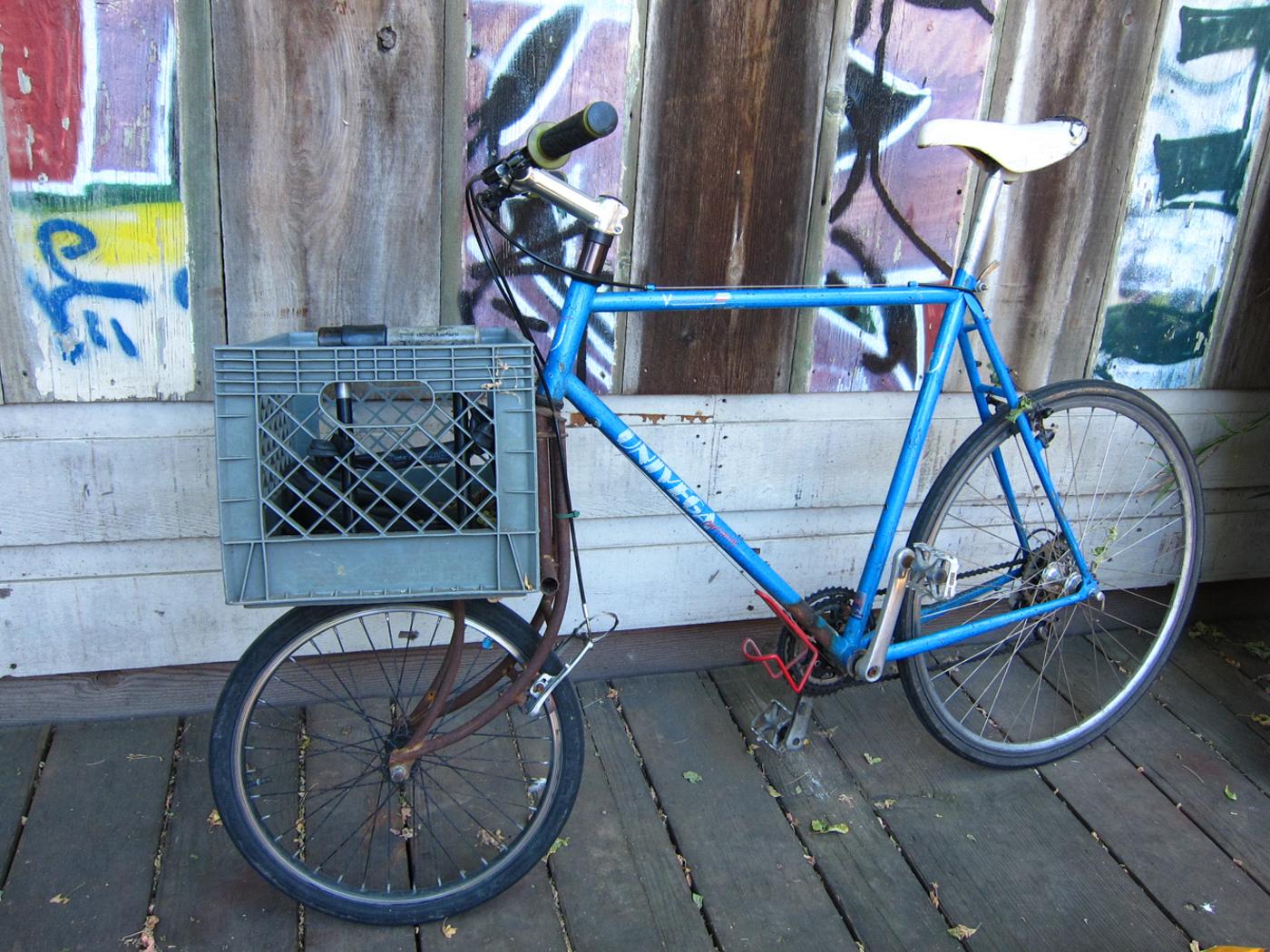 “The idea had been around for a while before it got introduced to me.  I’m pretty sure it was this fellow Ryan in Santa Cruz had an idea for an integrated rack and fork, then Josh Muir (Frances and Farfarer) was like why not make it for a 20″ wheel.  I figured out the actual geometry that might work for it and a structure that seemed buildable. The first one was a twin plate fork crown with double legs on each side.” 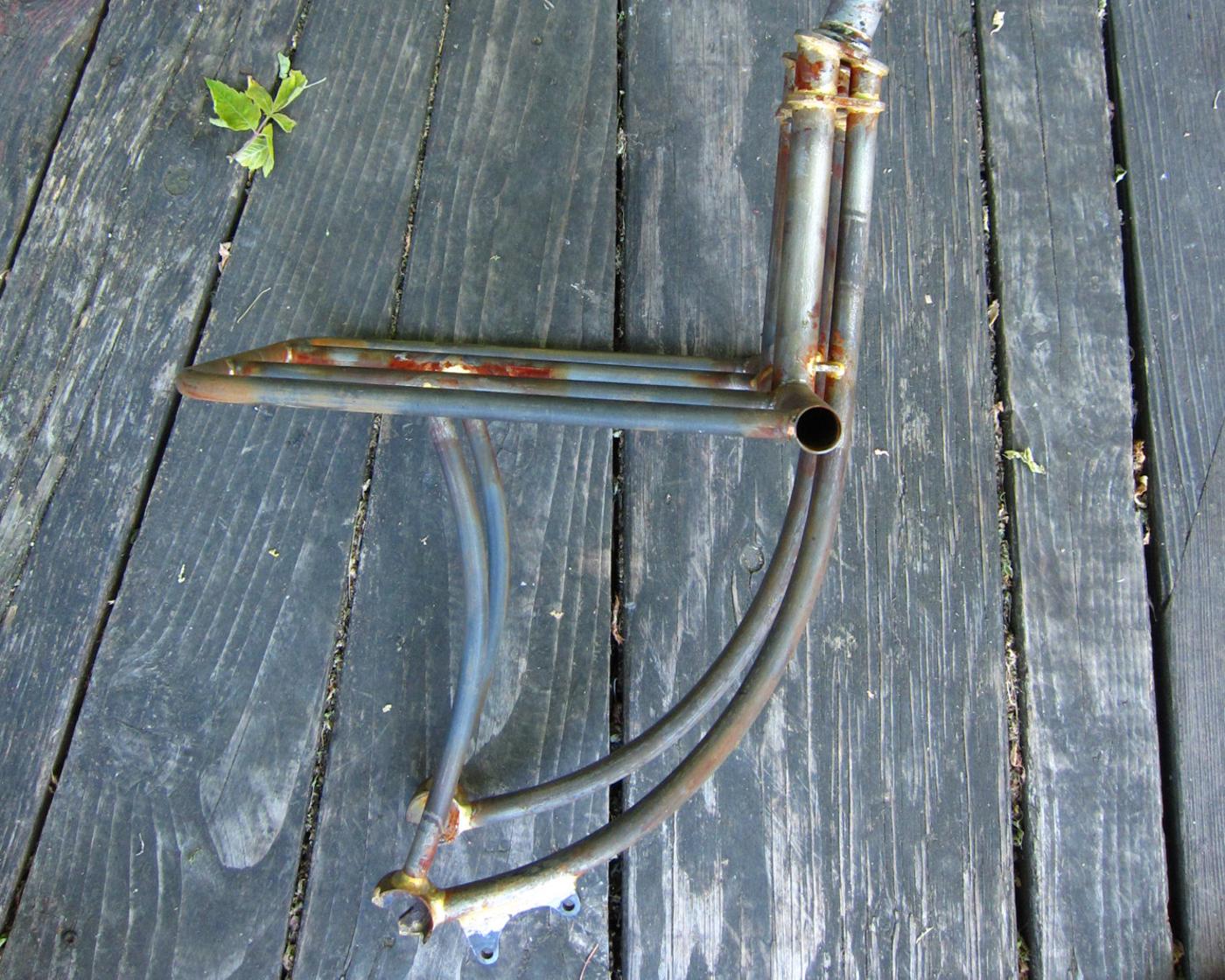 “The crown plates were made with a drill, bench grinder, and a file.  I used the wheel as the fork to bend the lower legs, pretty sure there were lumps where the tube formed over the spoke heads. Having waterjet cut crown plates made them easier to build, but it was still so much work that I only made like 6 of them before swearing them off.”

Thankfully Matt at Crust put these into production after all that.  I had been eyeing one of these forks ever since Adam showed up to the Baja Divide Grand Depart on one.  I had put one in my digital cart more than a few times before deciding that I didn’t think I needed it that bad.  The price, not to mention the shipping always held me back just enough to not pull the trigger.  A chance meeting at a night of ping pong at the Madrean shop brought me face to face with someone I had sent a email about a craigslist ad about an old bike frame.  Turns out this fella was an old friend of Benedict’s and after meeting me he just said to come snag the frame which had been sitting in his yard for a few years.  Finally, I had a frame that would fit the fork perfectly and it was finally time to pull that damn trigger. 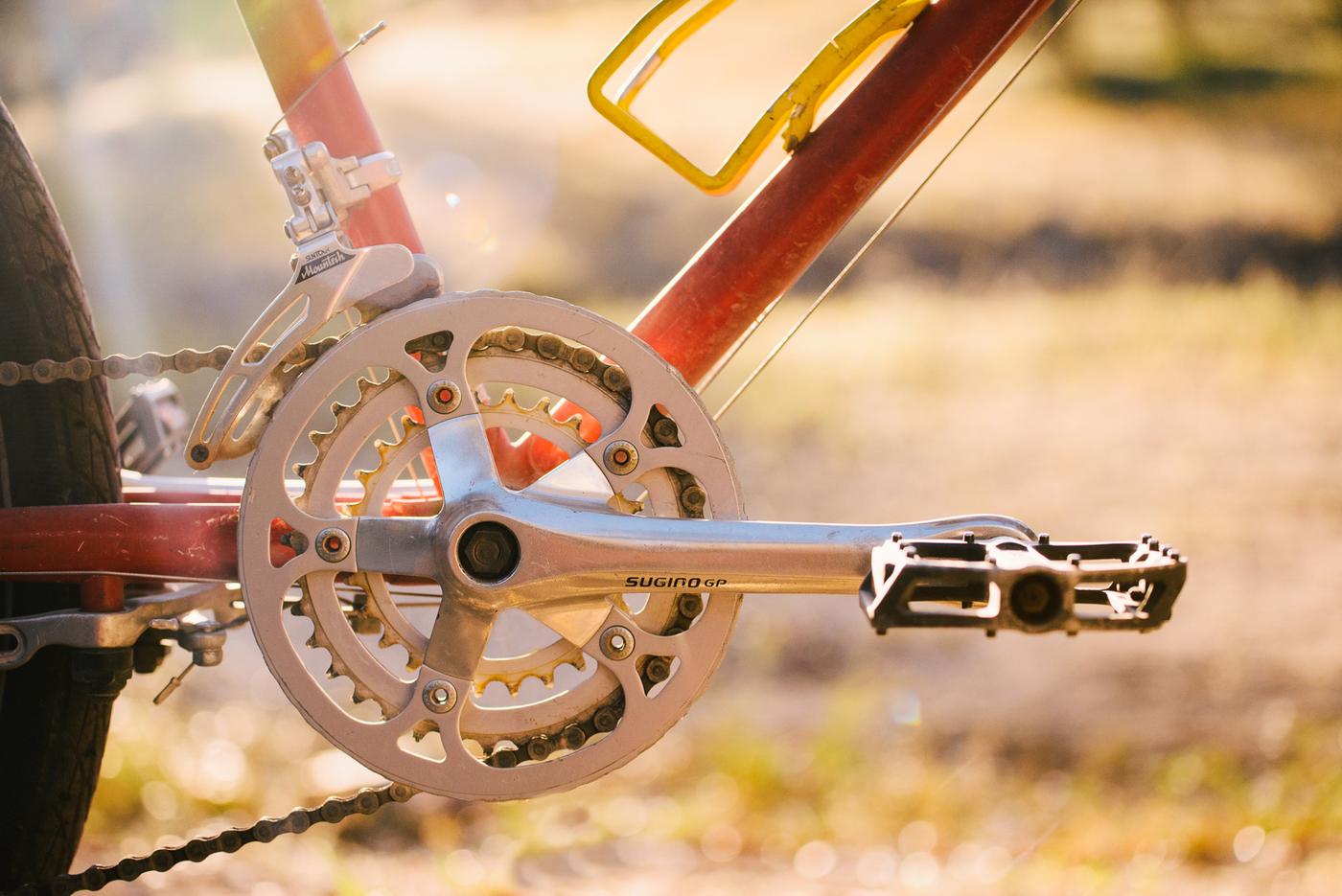 Now lets get into the build.  The frame was in decent shape already and I was able to rebuild the bottom bracket and salvage the cranks, front derailleur, shifters, and grips.  A few trips to Bicas yielded a 20” (hella spokes duh), a XT parallelogram V-Brake (the rear brake is mostly cosmetic so if ya gotta put your eggs in the one basket make it a good basket), a Deore rear derailleur, a pair of Avid adjustable leverage levers, a good ole Blackburn rack for extra extra cargo space, a bomber 26” rear wheel, and the final piece a zero setback 26.8 seatpost.  Conveniently, Crust  includes a 1” threadless headset with the 1” forks and a 1” – 1 1/8” shim for converting to standard stems n whatnot.  I threw on my set of Jungle Runner bars from my review a while back.  Keeping my butt nice and cozy is a Brooks C19 which is the best saddle my sit bones have sampled in recent memory.  An old half frame bag that has never really fit any bike continues to not really fit. 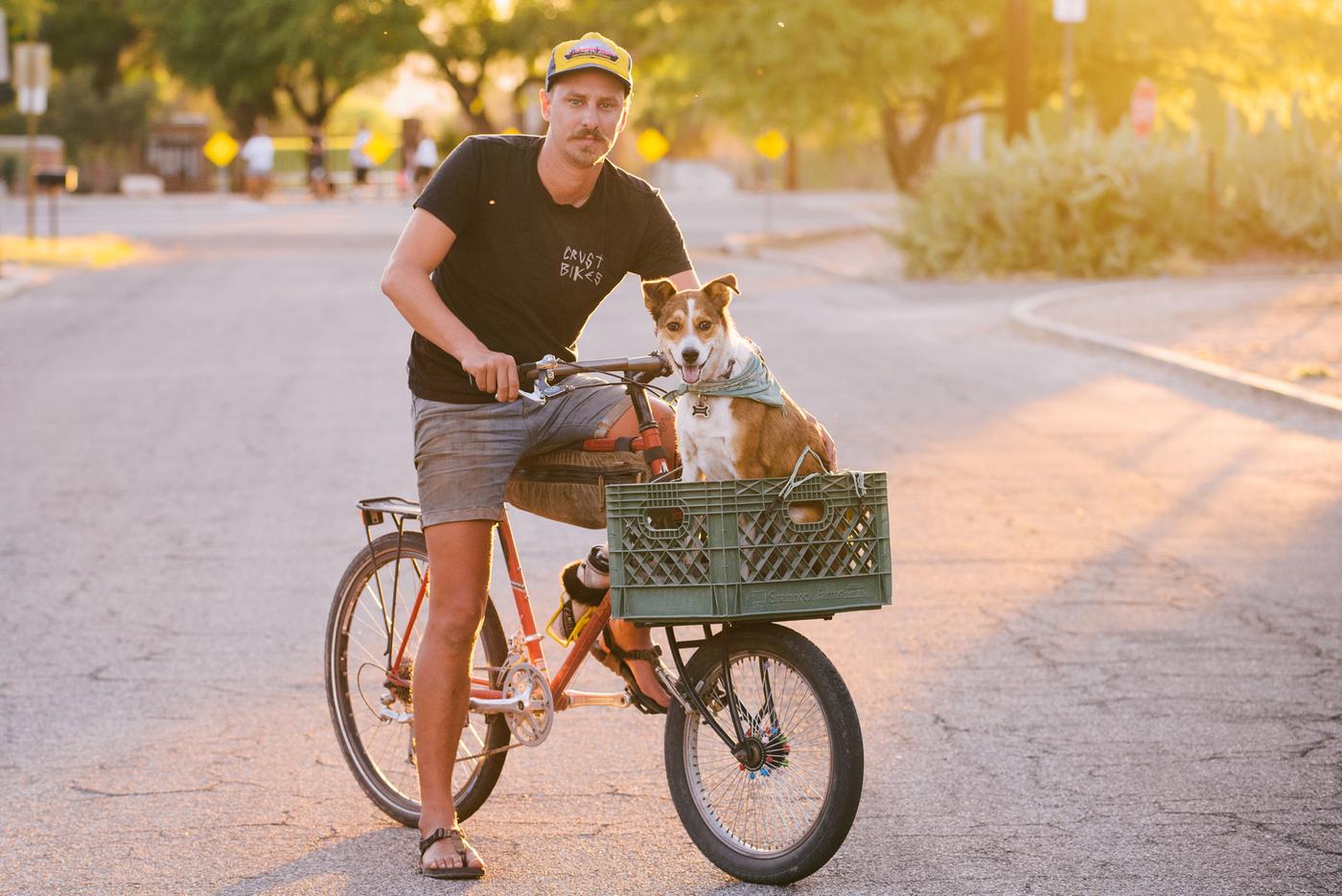 I bought this bike before I had a pupper, but with the idea that when the time came I would be ready. I adopted Dingbat last fall, and on the second day she was home we went for a spin in the basket.  She was hesitant than and still prefers to run along side the bike, but when necessary its real easy for her to hang out in the basket and roll along. At 35 pounds she is not the heaviest thing Ive carried on this fork by any means, but the lower center of gravity allows her to sit upright without it being sketchy. I have carried a few full grown humans (warranty void warning) when a bike broke down or someone needed a lift to lunch.  Just tell them to hop in the basket and away we go, every bike is tandem if you believe in yourself. One time my co-worker’s partner dropped them off at work and then forgot to pick them up, so into the basket they went and handed me up beers from the basket all the way home, it was amazing.  From picking up random shit I find on my way home from wherever to Costco grocery runs, this fork has handled everything with style (peep the spokey-dokes) and grace.  Heading out for a lil’ overnighter, just throw all your camping gear in the basket, no need to pack all delicately, just toss it in and go! After all my hemming and hawing about getting one, I can confidently say that buying a Clydesdale fork was the best bike component purchase I have ever made. 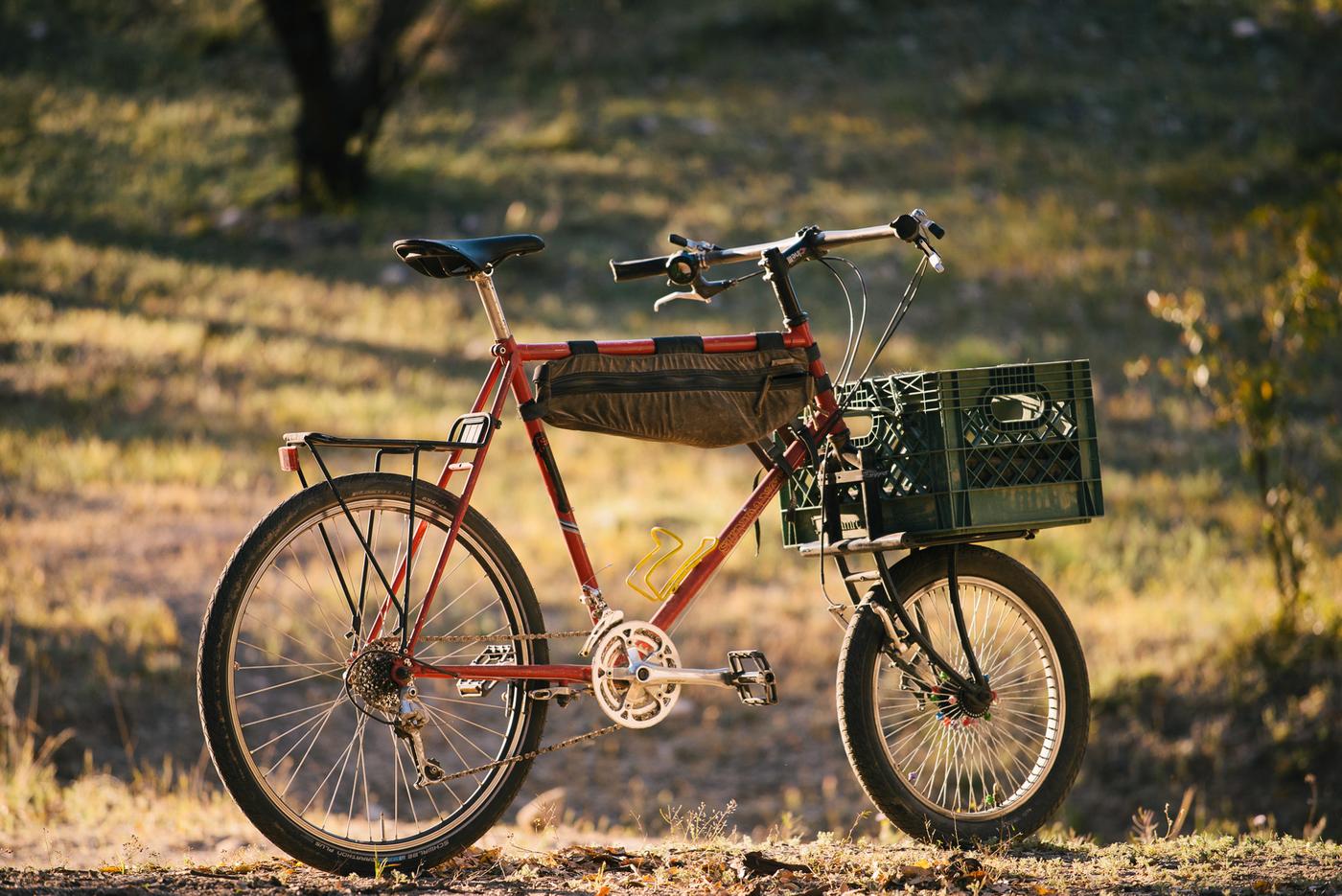 If you are looking to make any bike a touring bike real easily, I think this is a damned good way to make a simple to pack bike for carrying all your gear.  I could see this making a great transam or forrest road touring rig out of whatever bike you already have, as long as the axel- to-crown measurement is around 400mm. Or if you just want a cargo bike but don’t wanna take the plunge into a longtail or bakfiet, the Clydesdale is a rad option that preserves your wheelbase and increases storage capacity.  Check out the forks here, which should be back in limited stock by May 4th. Snag em while you can they go fast, May the fourth be with you!