Serena and I were sitting on the blacktop overlooking Dodger’s stadium and downtown L.A. after an evening ride, and somewhere around the middle of the half pint of Hornito’s  “I wanna do the southern part of the Baja Divide but like… make it into a surf trip” fell out of my mouth.   “Aw hell yeah. Let’s go.”  “Ok.”

From mid-October to late December, our plans shifted almost weekly. Within two weeks of our start date, Serena and Spencer finally bought their tickets. 24 hours before we flew to Cabo, Serena’s bike and gear came in the mail. In every sense, it was a “fuck it, we’re doing it live” trip.

We jammed fingers and sliced open our feet before we even got on the road. We got our periods in the middle of the Sierra la Lagunas and only made it 35 miles in two days. We rode with 8ft surfboards from Todos Santos to San Pedrito and Cerritos to surf whitewater and 2-3 foot shin-slappers. We washed our menstrual cups in rather suspect water. We couch-surfed and almost wept when we ate vegetables. We “dumped ‘em out” at the ocean, a lot. We wound up in a kite-surf wasteland that was full of margarita bars and too much Jack Johnson playing everywhere. We took acid and played on cliffs and drank all of some sweet old folk’s tequila and smoked all of their weed. We pet so many dogs. We almost gained a horse, twice. We used our words and didn’t fight or hate each other at the end. We got sand fleas. This is what a difficult, well-curated route looks like when you say, “This looks hard and doable, but I’d like to add some dumb shit to it, too”. This is what happens when three people who love each other dearly trust each other a little too much and just roll with it. No one threw their bike. No one cried. With one hand on my bars, the other on a bike box taped precariously to the one below it, teetering on Serena’s Farfarer trailer, we clumsily made our way from the airport parking lot to the highway. “It’s only like, a mile” we sang to each other for the next three miles. Lightless and without a map on an intermittent shoulder on MX 1 we bumbled toward the Cactus Inn. Jocelyn was there still and spent her last night filling us with tacos, beer, and expectation management. Bless her. Everyone talks about the sand and the mountains but no one talks about the cow raves.  At first, the undulating cowbells are charming; hell, they’re downright provincial. They quickly become part of the scenery and there’s something eerie but soft about their omnipresence. You will bob your head to it as you climb and descend into washes. You will fall asleep to them. You will wake up at 2 a.m. in confusion. They are forever within 30 feet of where you are at any given moment. It has a very Children of the Corn vibe after awhile but you’ll welcome it because between the dink donk and the coyotes it means something survives out here and you probably won’t die. Hold on to that comfort. Climbing to the saddle pass on the Sierre la Lagunas the following day was brutal. We were woken by our periods (see note at end), and the 20 miles we covered were a testament of will. My side-saddle surf rack caught the smaller boulders, sending me down the exposed edge twice, and sent my bike down on its own a third time. Party. The only highlight was watching Serena monster truck her way over and through them, trailer and all, fishtailing down the slate chunks wild-eyed. 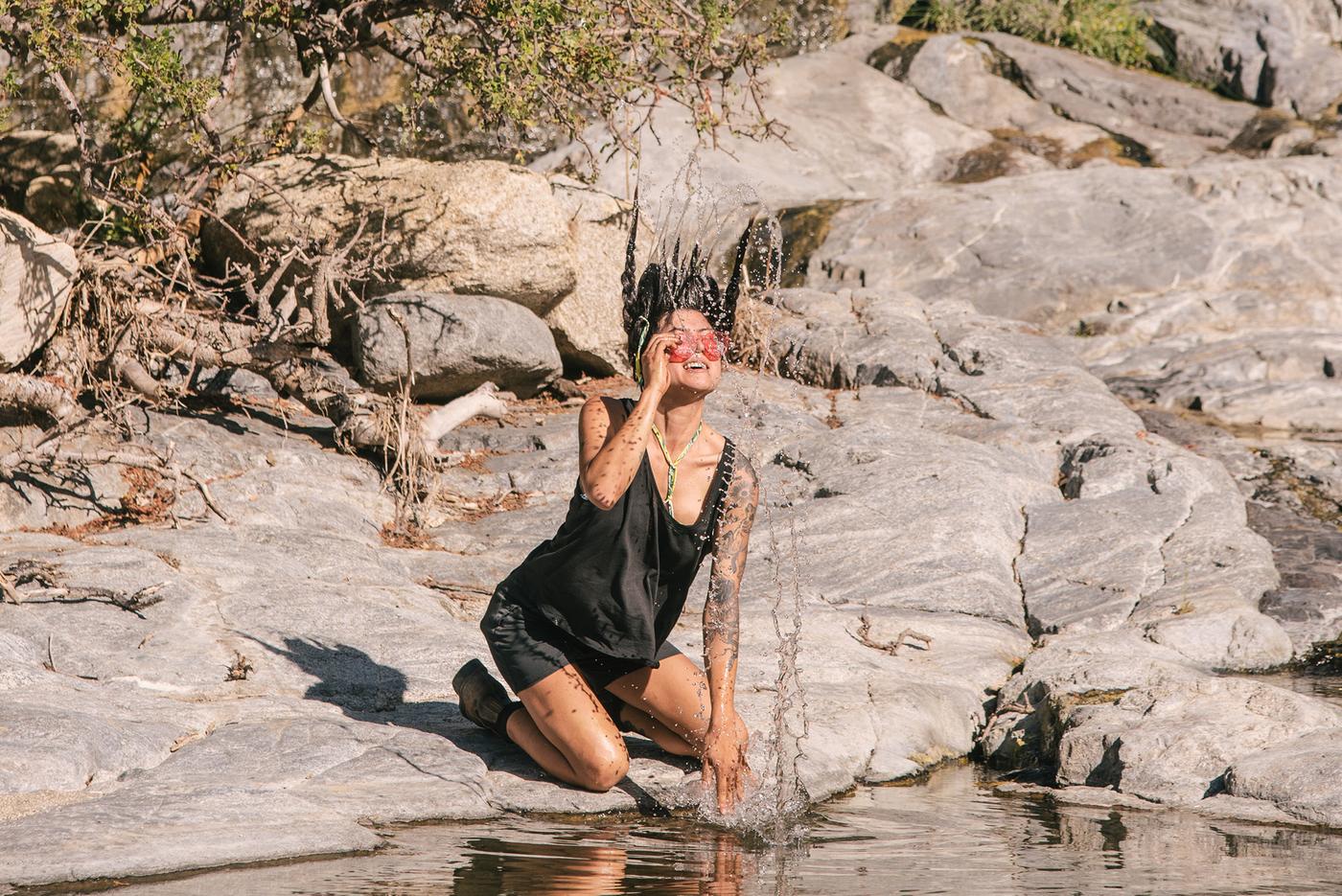 The highlight was watching Spencer do a Sexy Lady hair flip in a pool by a waterfall while we relentlessly dog whistled at him. With a little encouragement, bike swapping, and ass-grabbery, we were able to finish climbing out of the river valley before tossing our bikes into thorny trees in a clearing. To combat all the Period Bonk, a slumber party was in order. Serena and I gathered wood/kicked cow turds at each other as we watched the sun tuck under the ocotillo and cacti. We painted our nails over a firepit Spencer made us out of dead stuff. We tested the limits of her one person tent, christened the period hut, tormenting Spencer with our bursts of cry-laughter throughout the night/early morning. At San Pedrito we huddled together around margaritas and Top Ramen, relatively unwilling to branch out of our tiny suffer-cult to make friends with anyone other than the beach dogs. Some weed farmers/trimmers won us over and gave us some good tips on the surf, as well as enough weed to get us through the next 6 days. The point break at Cerritos had no swell and three surf schools. So we did what anyone who rode 8ft boards down the coast would do: we paddled out, rode party-waves with the surf students, pushed each other off and cheered for strangers in the water. I rode my last wave in just in time to see Serena swallowed by trinket salesmen and a very panicked Spencer sprint over the cliffs toward her. Every day held a new reason to fall in love with these ding dongs. Mica deposits in the cliff made the entire formation look like fools gold, and made the water shimmer with gold dust. As we rode the sandy washboard path back to the highway in the high sun, our bodies were almost glowing with the gold mica dust. Does it sound like a cheesy surf adventure video? Because it felt like one, and it was amazing. We skipped La Paz on the recommendation of a friend and were steered toward La Ventana instead. It didn’t hold much charm for us, so we drank our way through it. After a thwarted attempt to squat an abandoned restaurant/Cabana, we finished our Mezcalito on undeveloped beachfront under a giant date palm and watched the sunset on our bad choice. I got sand fleas. Not every plan B is a winner. The next three nights were spent on gorgeous beaches in relative isolation. Somewhere south of a bougie new resort with an airport, we ran around naked like children in the sand and tideline. We didn’t know or care what we looked like. We hadn’t seen a mirror in days and had long shed any sense of self-consciousness. Between the exhaustion and filth, the bullshit falls away. There’s no one to impress/look good for. Of course we rode in our dumpy underwear while climbing through the Lagunas in the high heat; of course, we ran around naked without shame; these fools are gross and I’m gross too. It never occurred to us to feel uncomfortable. It was purely three friends only concerned with not ruining a good time by dying. Anything beyond that seemed like excessive worry.  We were still reeling from a night of free drugs and tequila by way of very gracious Alaskan snowbirds when we started the 40-mile haul back to Cabo. The trailer was emptied and swapped, and we all pretended not to notice how much each other hated it as we spun through loose sand up a mountain just to be greeted with… more mountain. It’s not that we treated each other with kid gloves, it’s that we genuinely wanted each other to be having the best time, all of the time. Sometimes that meant flashing just one boob at whoever was last coming up a climb. Sometimes that meant granting someone a mile or ten of space to deal with whatever trail demons found them. 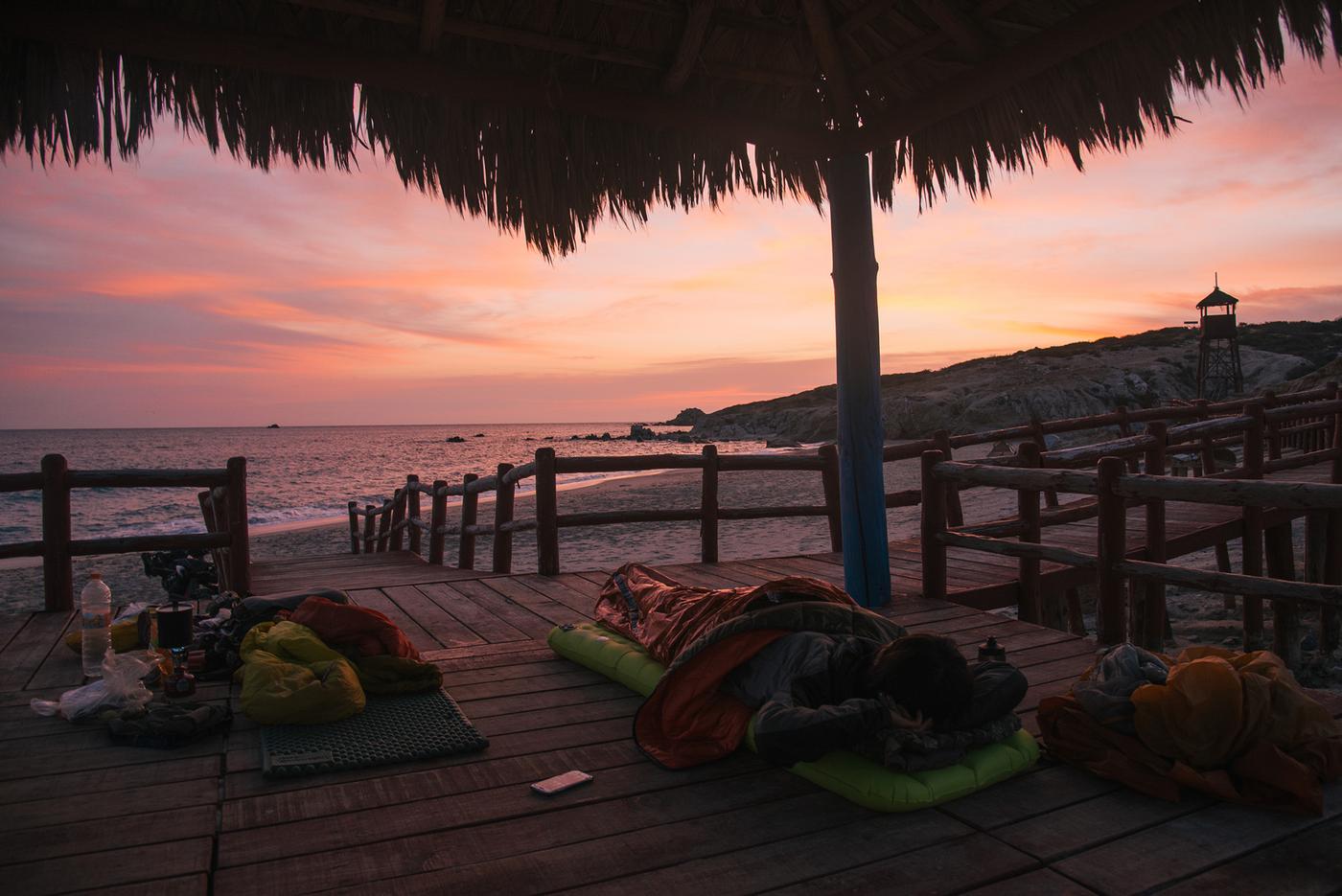 Once it meant signing up for an unremarkable snorkeling tour just to watch the both of them bark at sea lions until the sentient sausages rolled into the water after them. I’m unsure what sort of magic we had conjured, but we made it through the loop without any mechanicals, including flats. To this day I am convinced that the myriad of street dogs and errant horses we loved on were little wizards, blessing us for our pets and apples. Whatever magic it was, it was ultimately a love spell, revealing itself with every primal noise let out in frustration or dick drawn through the dirt patina on parked cars. In the end, we rode anywhere from 15-30 miles a day with one exception. Sure, we could have blasted through 40-60 miles a day (…probably?) like so many of the groups before and after us. But why be efficient when you can be fun? A word about bikes and periods:  Very few folks talk about periods and bikepacking/touring and it’s what I’m asked about most frequently when discussing trips/routes one on one. I can only speak from my own experience on this. Don’t let it deter you. I promise you’re going to bleed regardless on a bike trip so why let your period stop you? Honestly, I broke my pinky before we got off airport property. I’d rather be riding up a mountain, breathing clean air, splashing in river crossings, and gossiping around a campfire than sitting on my couch in Hollywood watching Forensic Files. Go bleed in nature. It’s good for you, and you can have a good cry at how beautiful baby cows are before they think you’re herding them and start running with you. 10/10 would recommend. Use a menstrual cup and bring baby wipes.

SPECIAL SHOUT OUT THANK YOU from the depth of our hearts to Salsa and Crust. I did the planning, Spencer did the shooting, Serena did the stoke-ing, but our dreams could not have been realized without your support. Ya’ll really made this happen. We cannot express our gratitude and promise to try to stop breaking everything you send us. Love yall to bits, thanks for your unwavering support and kindness.