For those of you who have been following along for a while, you may know that before all this bikepacking-cool-bike-stuff I used to build and ride freak bikes, in fact, up until recently a majority of my touring experience was done from the seat of a tall bike.  After college, I chance happened upon a warehouse full of freaks and bikes alike, it was the most beautiful place I had ever seen.  Winn had migrated to LA in search of the same place. I have admired Winn as a fervent builder for years.  The best way I can illustrate my reverence is this story; once upon a time I built this ridiculous folding tall bike that I rode 2000 miles all over the Northwest . When I got home the frame snapped in half, turns out 1/2” conduit from Home Depot isn’t a good building material.  I rebuilt the frame non-folding, but the geometry was kinda awkward and I gifted it to Winn so she could fix it.  Her idea to fix it was to just welded an additional frame on the bottom of it and then tour from SF to LA on it.  That frame later became a weird amalgamation bakfiet and has now found its possible final resting place in rear part of the tandem on the fence in photo #11.  That crappy frame I poorly welded many years ago has lived more lives than I can count as almost every kind of bike imaginable.

We feature a lot of amazing framebuilders on this site, many are true masters of their craft, but with this piece I want to highlight something different, something as simple as welding a discarded 15mm wrench between two kids bike frames, three welds, and probably less than 10 minutes of work.  This amount of simplistic creativity can completely change a bike into something infinitely more silly and inspiring, that is the magic of Winn.  I have showcased a few of Winn’s creations here, mostly the ones that were easiest to drag out of the piles of bikes around the yard, from a little small tall to a 6 frame behemoth towering over the roof.  All of the bikes here are rideable and have been ridden. When we lived together Winn would regularly commute around LA on a 9 foot towering quadruple frame tall bike.

We’ll start with your standard double stack tall bike, even your cousin has made one of these.  This one has ultra-custom angled track dropouts and a coaster brake that isn’t even bolted on (safety 13th). It even has that classic High Sierra decor with chopped Bullmoose bars for you Rivendell nerds shaking your heads. The smalltall, just two kids bikes welded together simply.  You don’t even need to move the drivetrain around on these, the top frame acts as a long seatpost extension.  Winn has a fleet of these around the yard, with every bike co-op being overflowing with discarded kids bikes the supplies are plentiful.  For the simplicity, they are some of my favorite of her creations. This bike was a creation she made working and building out Burning Man, 6 frames high and at least double her weight.  If you will notice the multiple sets of handlebars on the front, which are used to steer the bike as she is climbing up, while rolling, to mount it.  After getting this behemoth back to LA she collaborated with David Cole to paint the whole bike.  Some of you may also recognize the crucified tall bike on the roof from the Crank Mob days or this ridiculous video. 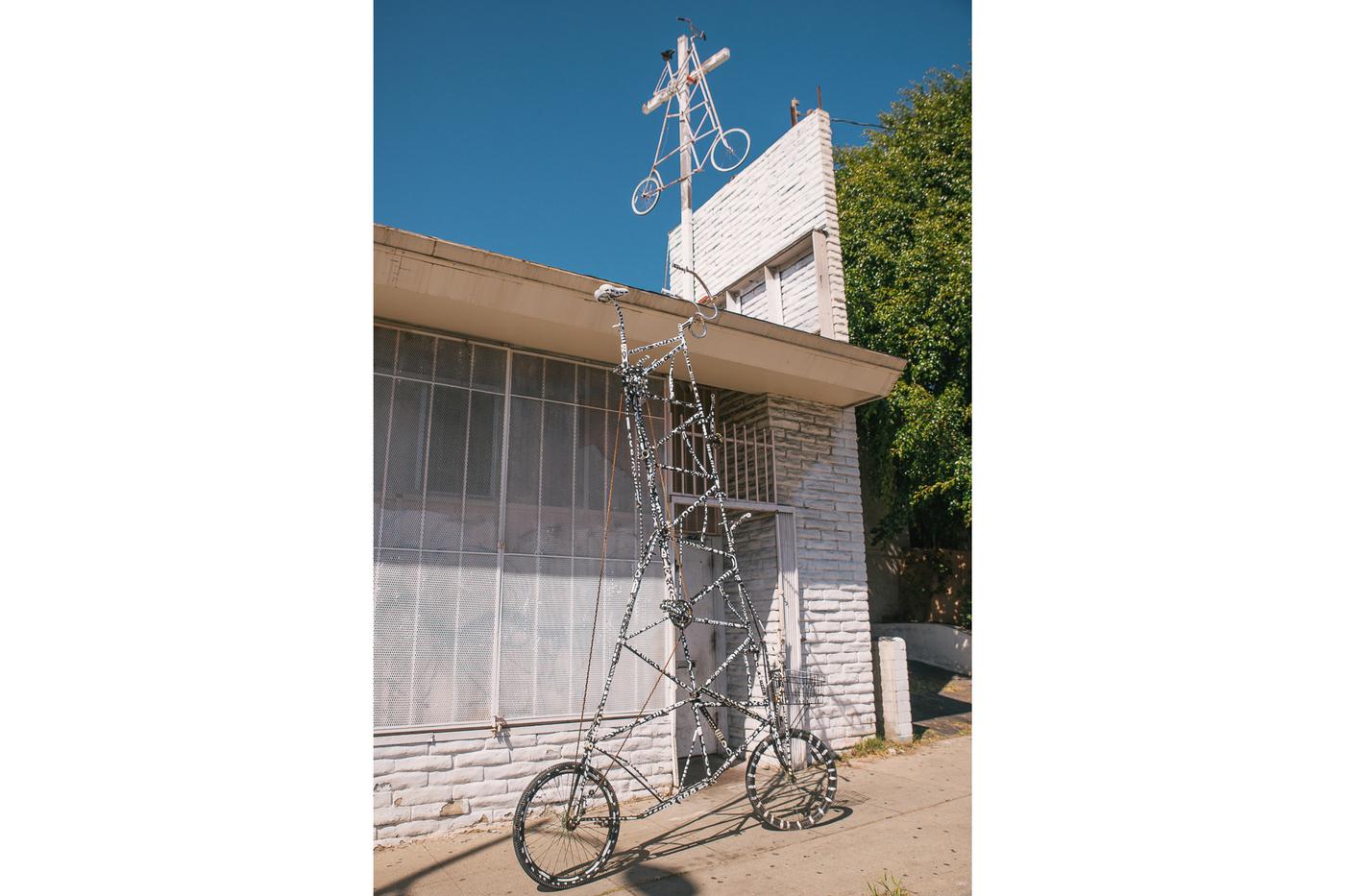 And finally, my favorite bike I’ve yet to see Winn build, the scrap yard fixed gear.  Wrenches, lengths of chain, plumbing fixtures, and rebar, literally whatever was lying around.  This bike is a rideable pile of scraps and discarded junk.  The drive side fork leg made of out of a welded shut pipe wrench may be one of my favorite bike details EVER. I’ve watched Winn go from a wayward pup on our doorstep to being one of the key members of the space. She continues to mold a magic world around her on bikes or otherwise. She has become a skilled builder with just about any medium, all of stemming from this wacky freak bike world.  She continually makes the silliest and most creative freak bikes and I’m always smiling ear to ear when I ride any of them.