Every bike has a story, but some intrinsically harbor more nuanced lore. As you might have noticed, over the past few years, I’ve acquired a few Ritchey frames from the 1980s. We’ve previously covered my Everest and the story of Tom’s early Bullmoose designs; I also have a 1985 Annapurna, and this no serial number 1980 Ritchey, which might be the best build yet.

This era of mountain bike design and development is my favorite. In the late 70s, guys like Joe Breeze built beautiful bikes inspired by balloon cruisers and klunkers. Tom Ritchey, inspired by the frenetic energy of the mountain bike genesis, began making fat tire frames in the late 70s. From 1980 through 1981, several bikes left Tom’s shop, including the fabled ‘chicken coop’ bikes, and a few were built void of any serial number.

This bike is the latter, and boy, does it have a story… There’s an interesting thread on MTBR that dives into the story behind the ‘Chicken Coop’ Ritchey frames:

“John Finley Scott, professor of Sociology at UC Davis and erstwhile owner of Cupertino Bike Shop (1980-89) was an early voice and advocate for the offroad bicycle. An avid tourer and gravel road adventurer, Finley built his own “Woodsie” machine in 1953. A Schwinn frame outﬁtted with balloon tires and multiple gears, the bike proved capable of going places the common bike could not.

The Woodsie, though heavy and prone to breakage, served its purpose as the embodiment of an idea. Unfortunately he was unable to ignite any enthusiasm and eventually the bike and what it represented faded away. Or did it?

Finley was merely ahead of the curve. In the late seventies, applying the technical advancements of the Cupertino and Marin klunker-racers, the “mountainbike” was born to a couple of enterprising Marin hippies. Offroad cycling was catching on strong with demand sucking up every bike available. The average mountain bike was fetching $1300, cash on the barrel head. Perhaps, thought Finley, with a nudge of his own capital and parts, he could help sustain the industry and sell some bikes at his newly purchased Cupertino shop? A potential win/win.

Meanwhile, local Peninsula frame-builder Tom Ritchey was building and selling MTB frames at a prolific pace. To keep up with the ferocious demand, Tom needed to further streamline his fabrication process-requiring capital. Finley was keenly interested in helping. Sometime in 1980-81 Ritchey agreed to supply Finley with 110 frames for the price of $190 each (no fork, no paint and no braze-ons). Finley’s Cupertino shop would finish and sell them as mountain bikes.

Well, win and not-so-win! In the end Ritchey got his capital and Finley his frames. But due to logistics of finishing the frames and locating and fitting the mishmash of parts, most of these frames were not sold and eventually hung to rust in Finley’s chicken coop out-building in Davis…” 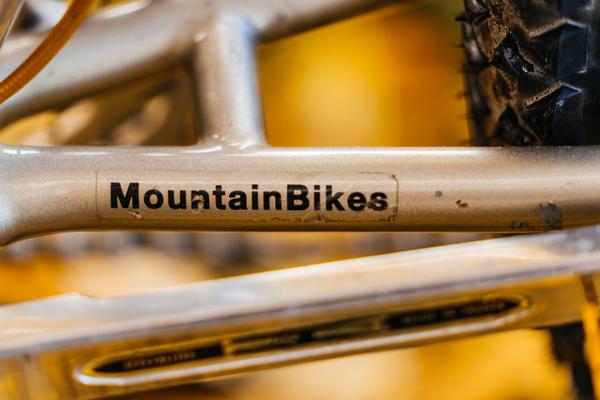 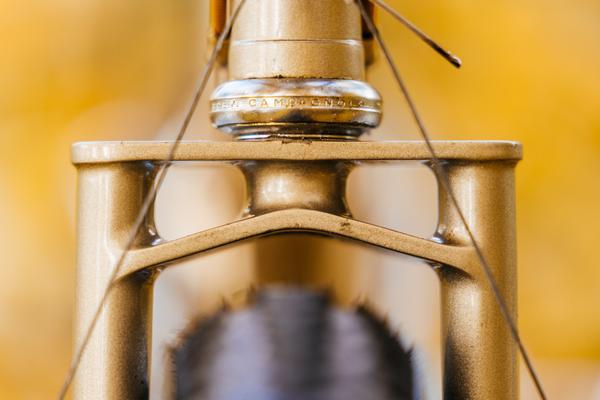 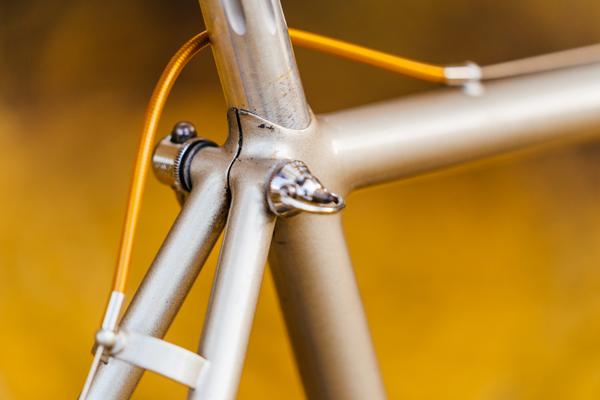 During the Chicken Coop frame days, Tom built several other frames void of serial numbers and without forks. The collector I bought this frame from, David, was recently interviewed by Ritchey. He has quite the collection of 1980s Ritchey frames. He bought this frame and hired Ed Litton, a legendary Bay Area builder, to make a fork for it and finish the frame in Imron paint in a beautiful gold/champagne hue. While this is not a Chicken Coop bike, which are identifiable by their forward-sloping top tubes, it is from a remarkable era in the Ritchey timeline. 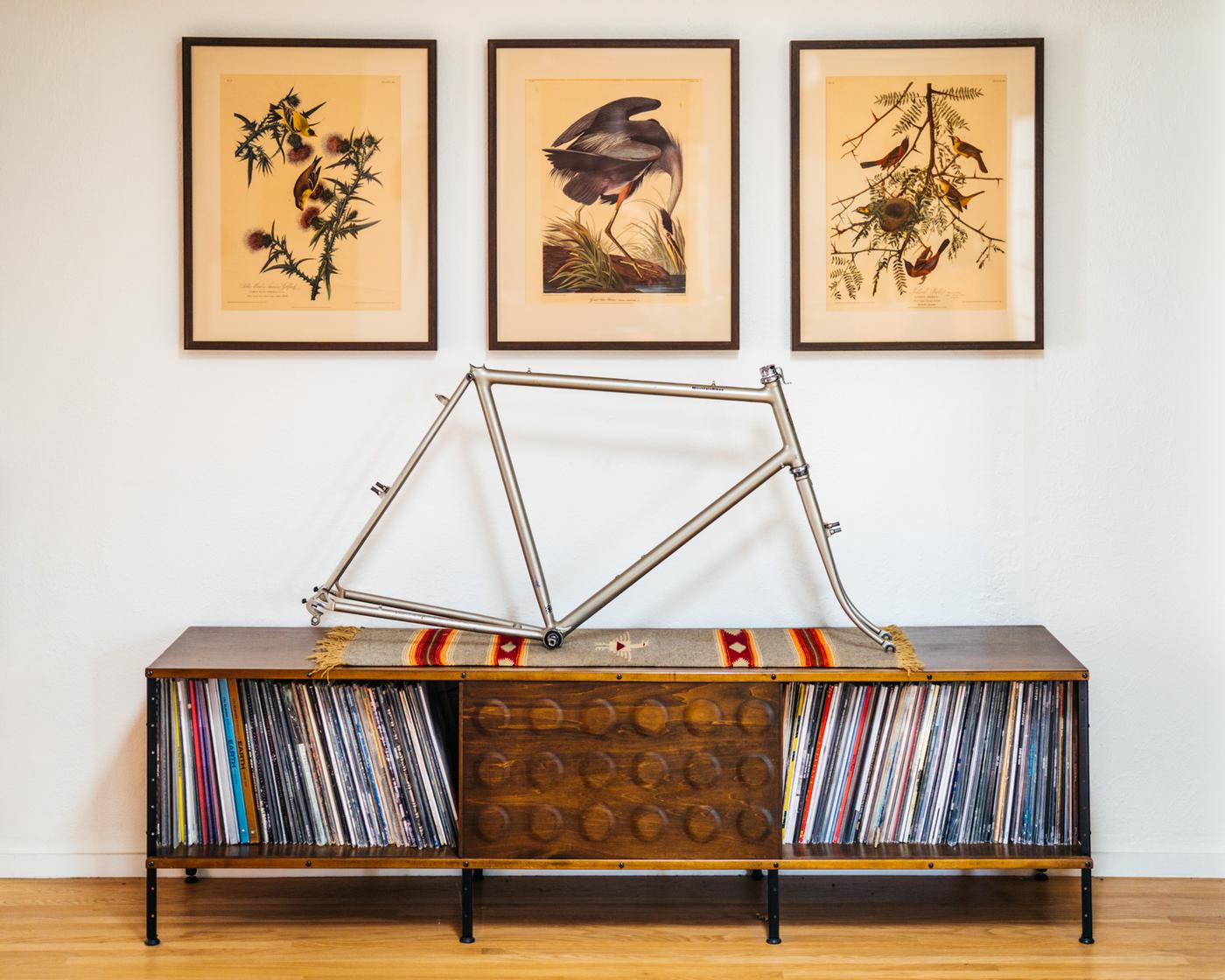 This bike is full of short anecdotes, including the way I came to acquire it. It was 6 am on a Sunday morning when Josh texted me a Seattle Craigslist ad. “1980 No Serial Ritchey Frame.” I read the ad and immediately called the seller. We chatted for a bit, and he seemed legit. He even knew about The Radavist, which was cool for me to hear. The frame is a 22″ size, so a bit small for me, but the top tube length would fit me perfectly. I sent David, the seller, a Paypal payment and began to catalog my parts bin, making a spreadsheet of the components I’d need. 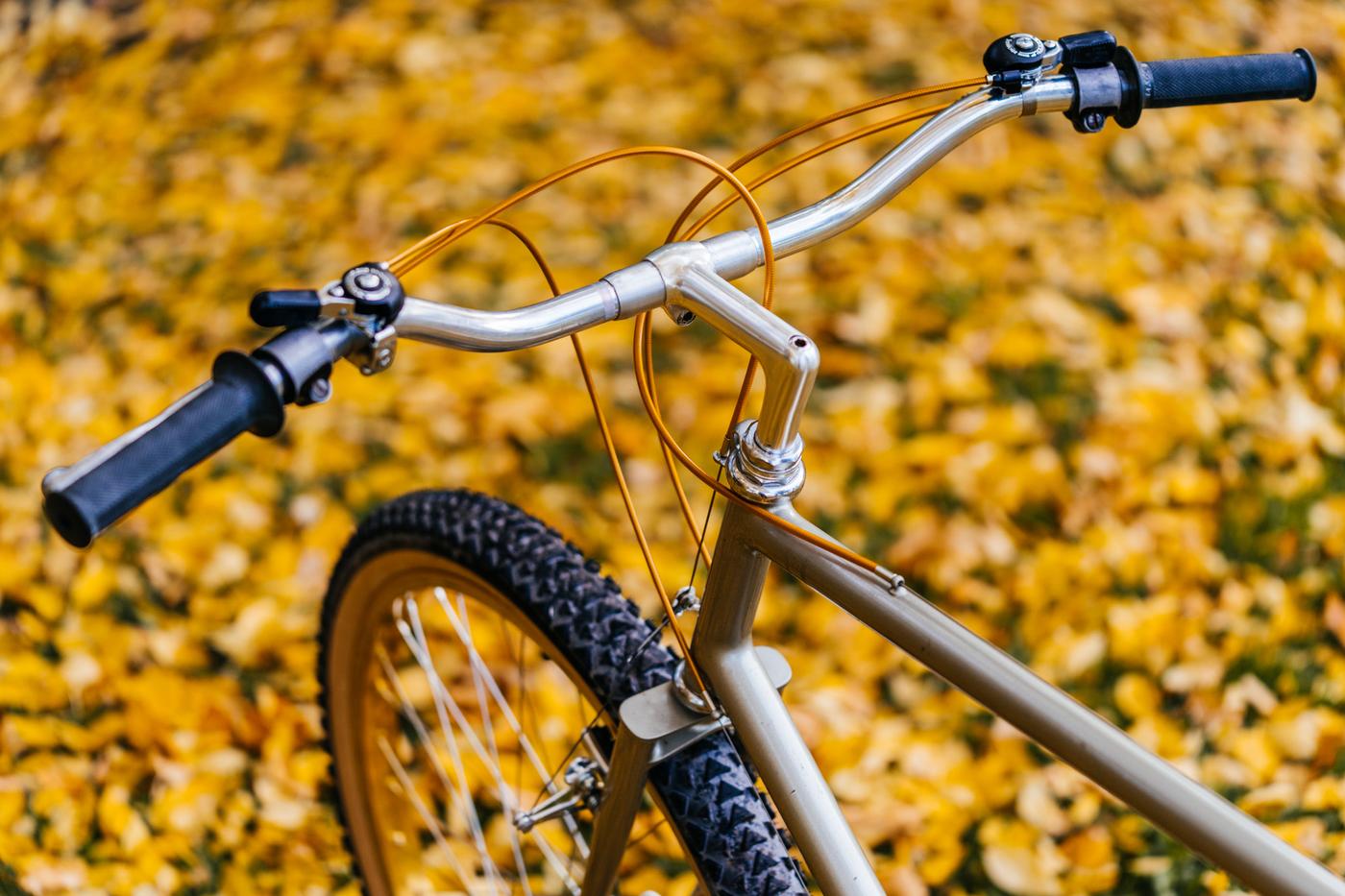 Bikes of this era—late 70s and early 80s—relied upon a mix of French, Japanese, Italian, American, German touring, BMX, road, and even motorcycle components since there was no standardization for off-road components yet. Remember, Shimano’s Deore “Deer Head” group didn’t come out until 1983 so before that, builders and makers got creative. It took years of hard use to determine which components worked the best on these early bikes. 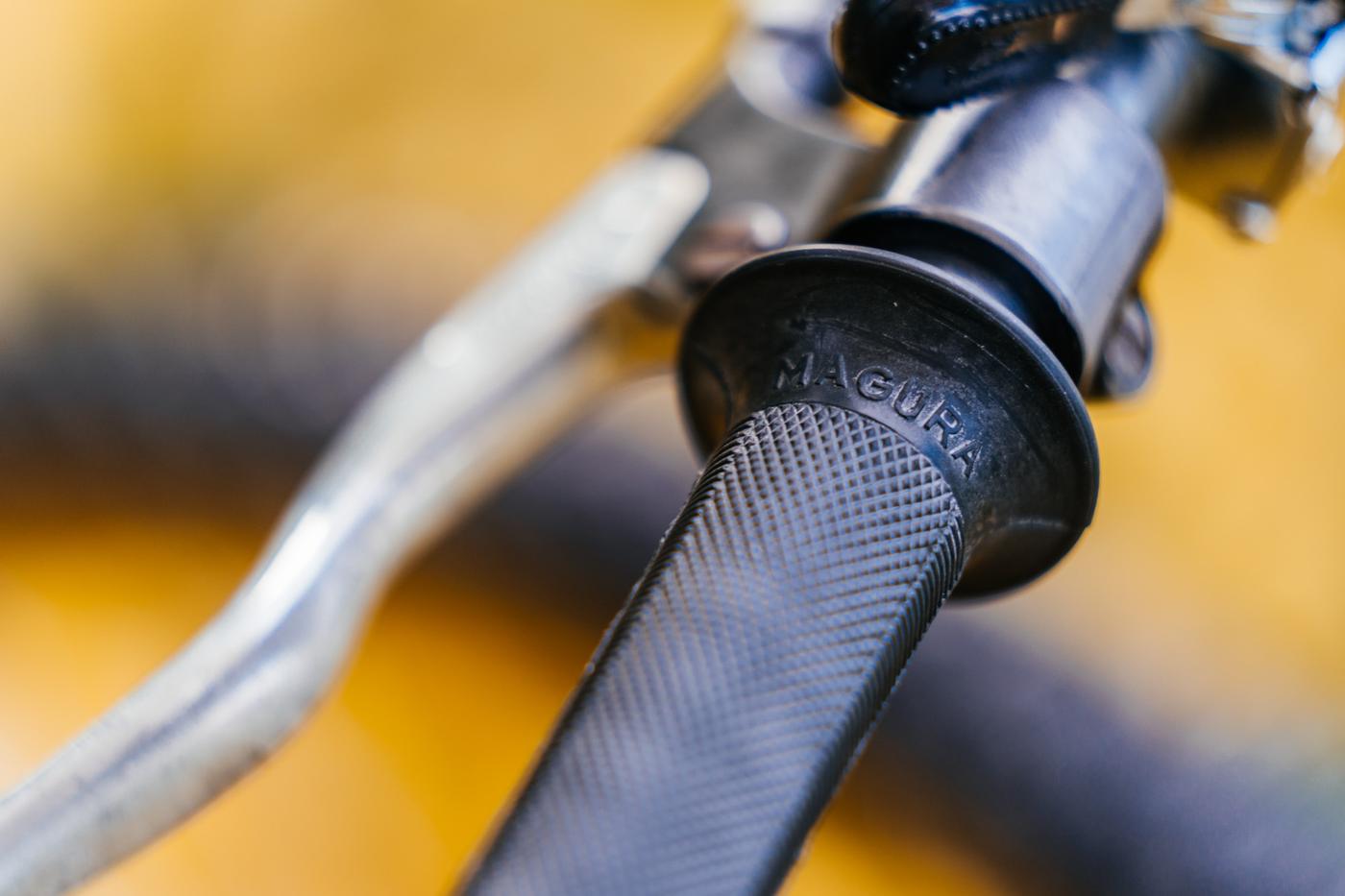 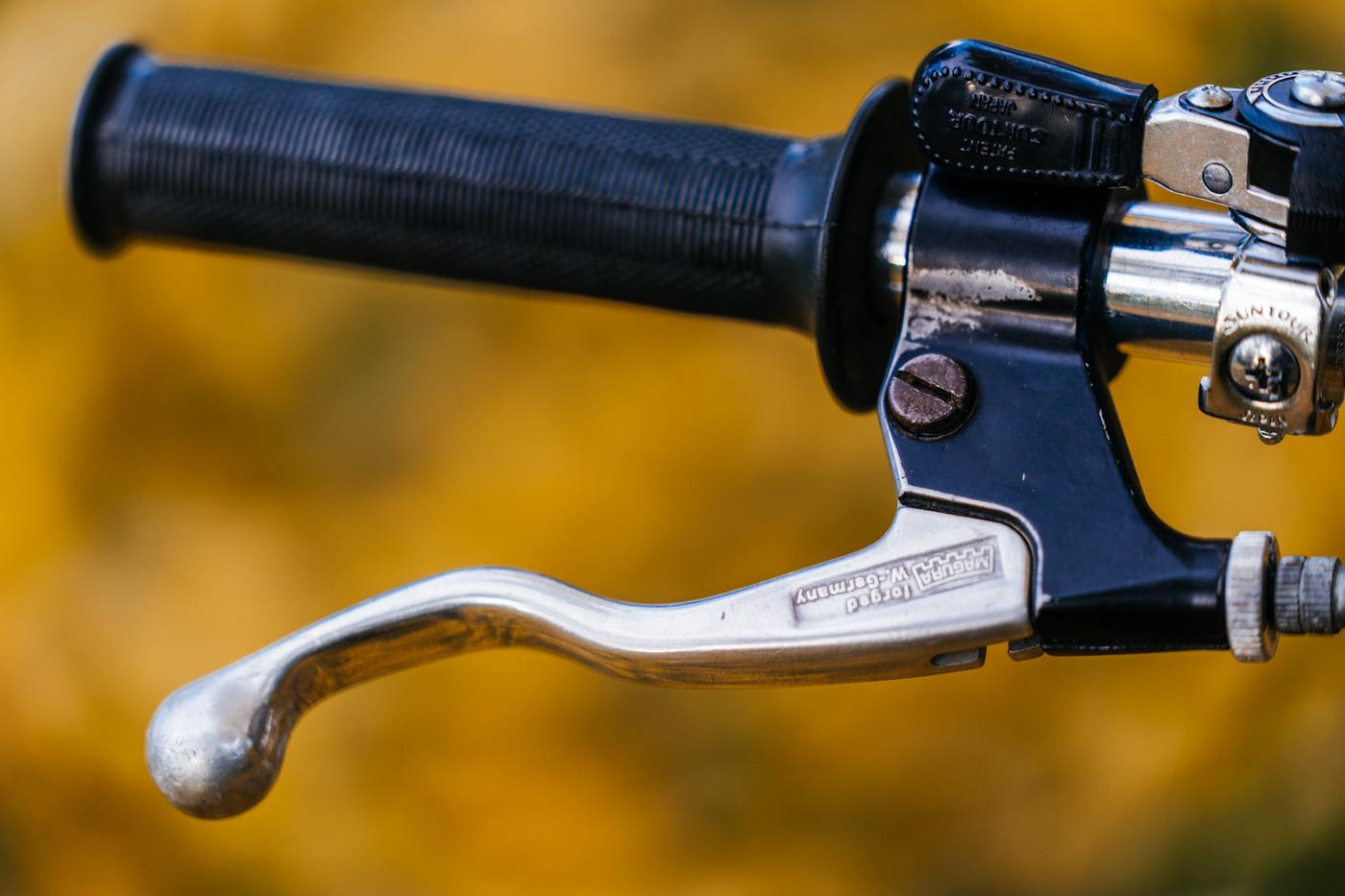 Once I had a good idea of what I’d need for this build, I began reaching out to friends within those respective realms. A friend introduced me to a motorcycle shop in Chicago that had the late 70s handlebars, Magura “Diamond” grips, and the Magura brake/clutch levers. 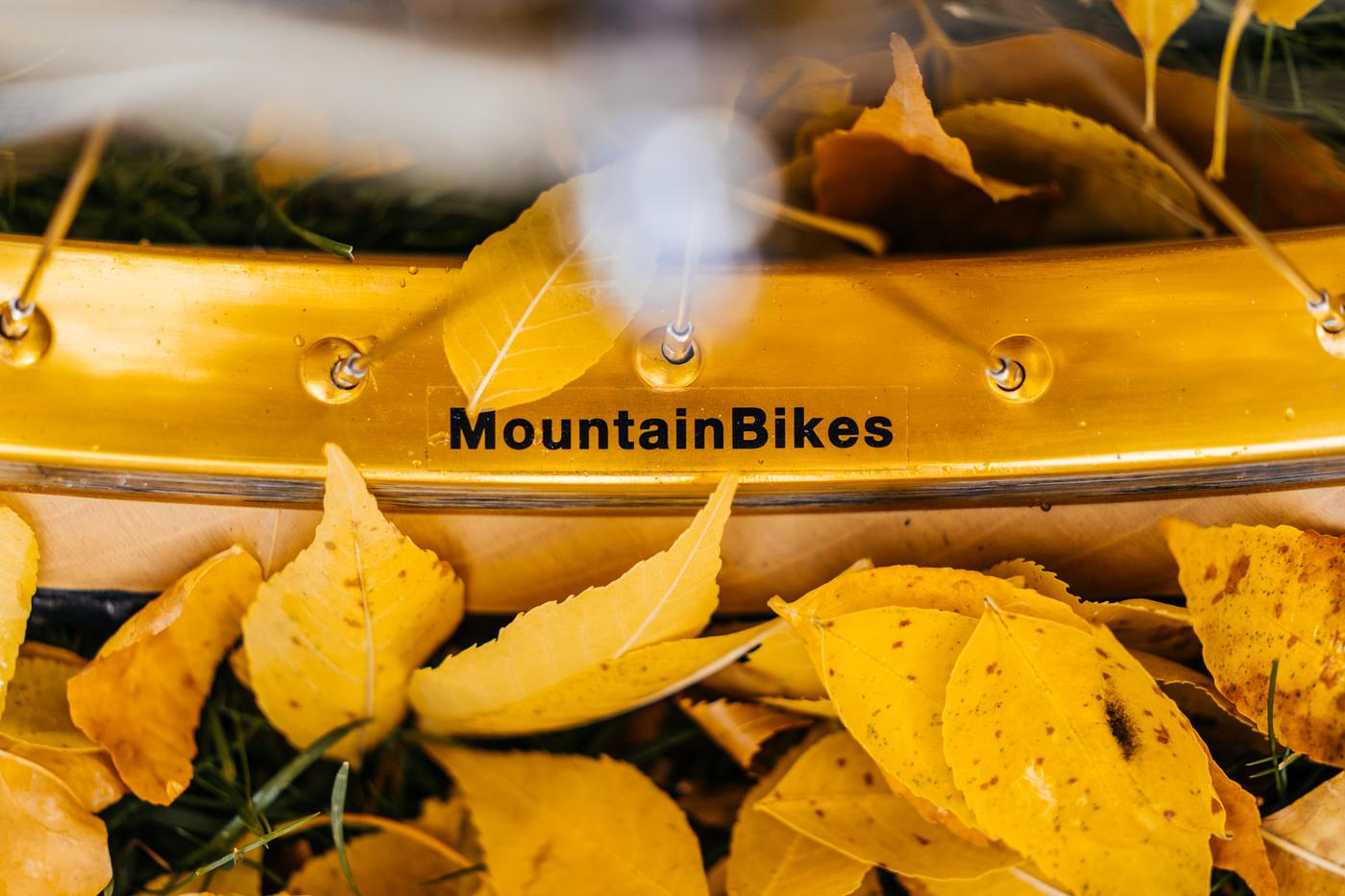 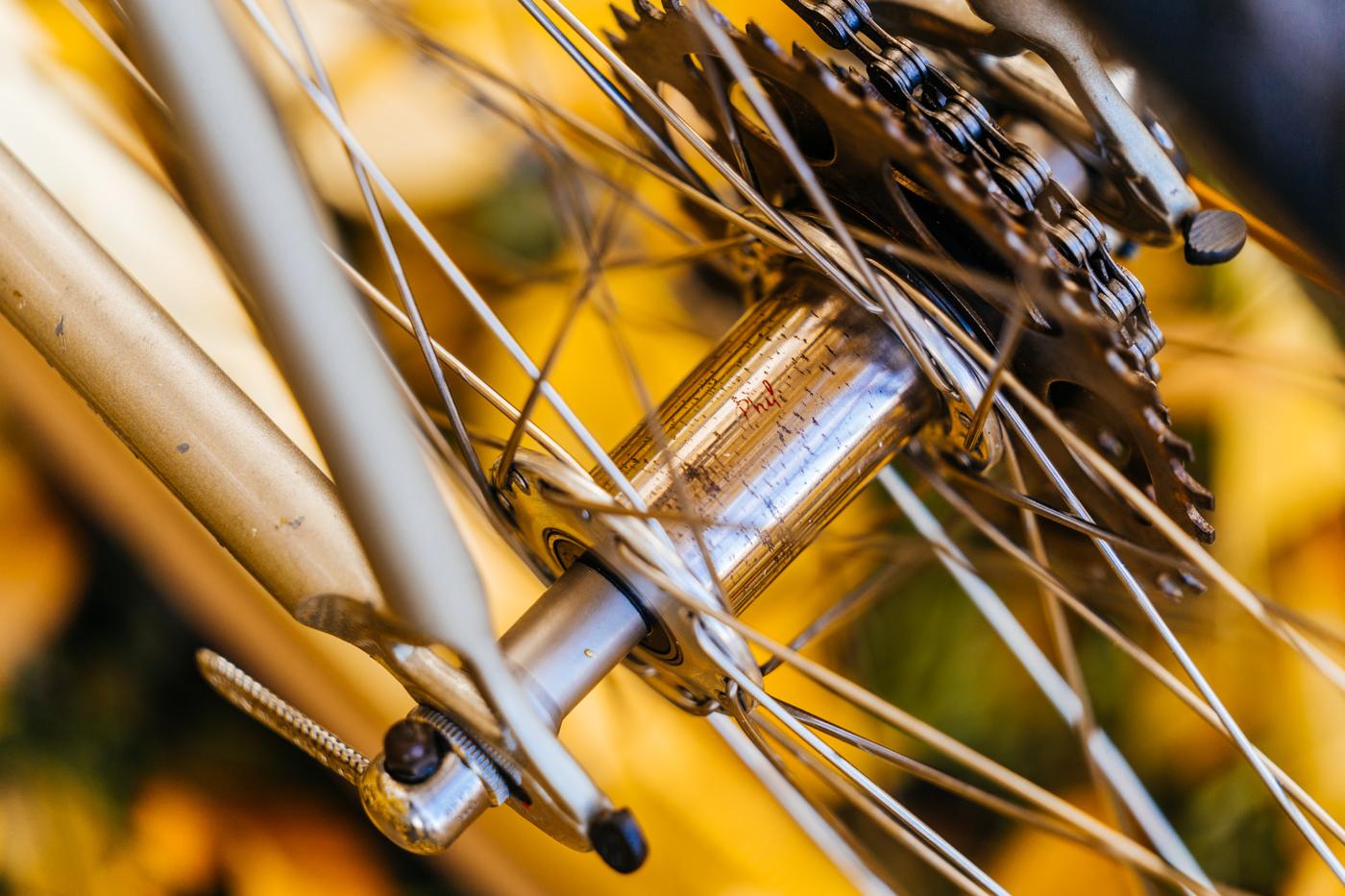 David, the frame seller, sent me the rims for a fair price, complete with the “MountainBikes” decals, which I paired with some Phil Wood hubs I had. Dustin at Phil Wood serviced the hubs: spacing them appropriately, overhauling the bearings, and polishing them up without cleaning the patina from the stainless steel shells. I had Bailey at Sincere Cycles lace these wheels up 4x, a typical lacing pattern for the era. 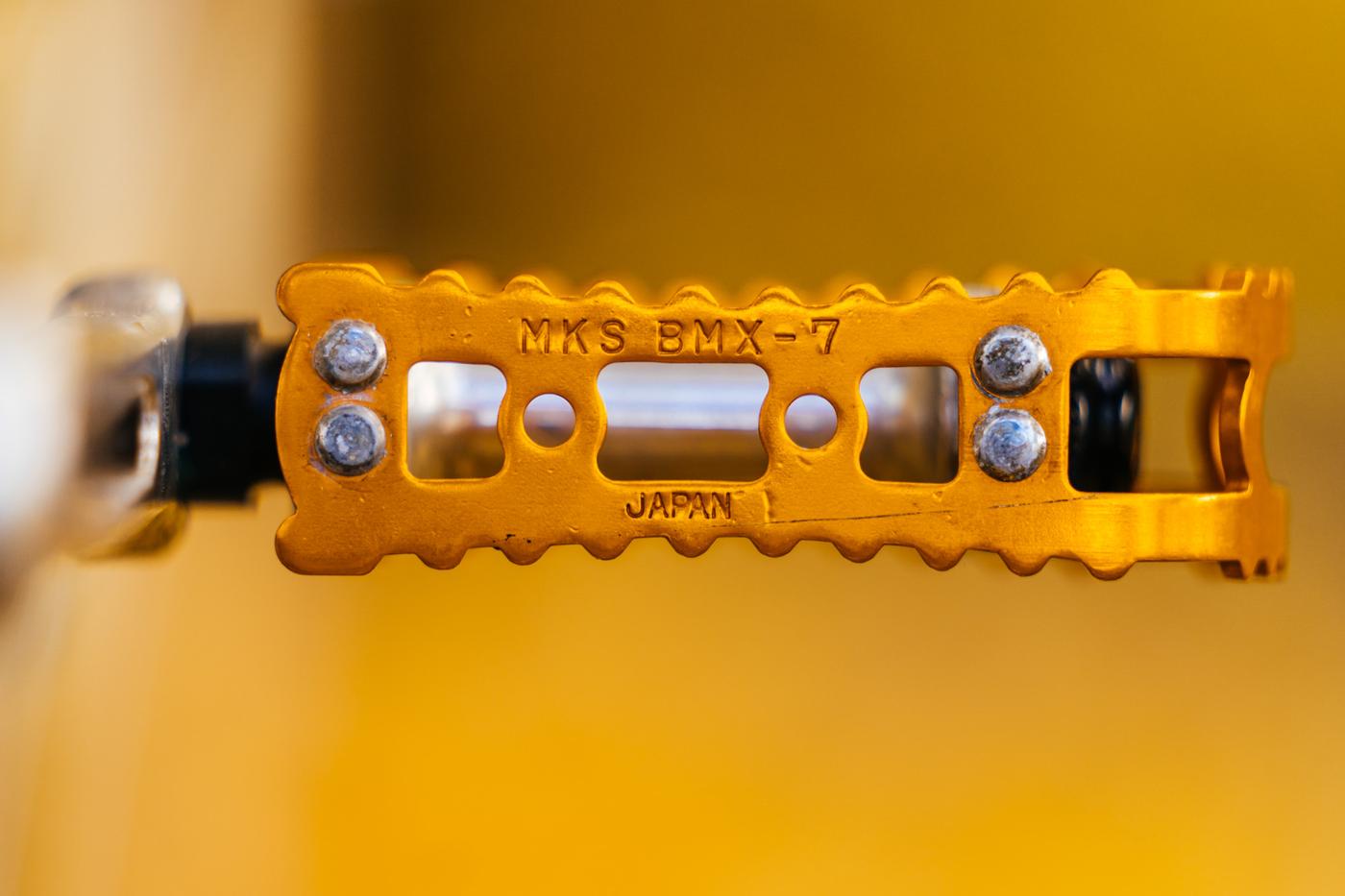 After overhauling the Tam and Everest bottom bracket, this one was a cinch: Dustin had also sent along the appropriate spindle and bearings, those TA cranks came off my Tam (which I’ve sold to Josh), and I refreshed the Mafac cantilevers using a kit that Tasshi sells. The MKS BMX-7 pedals were the last piece and came from a friend who restores 1970/1980 BMX bikes. 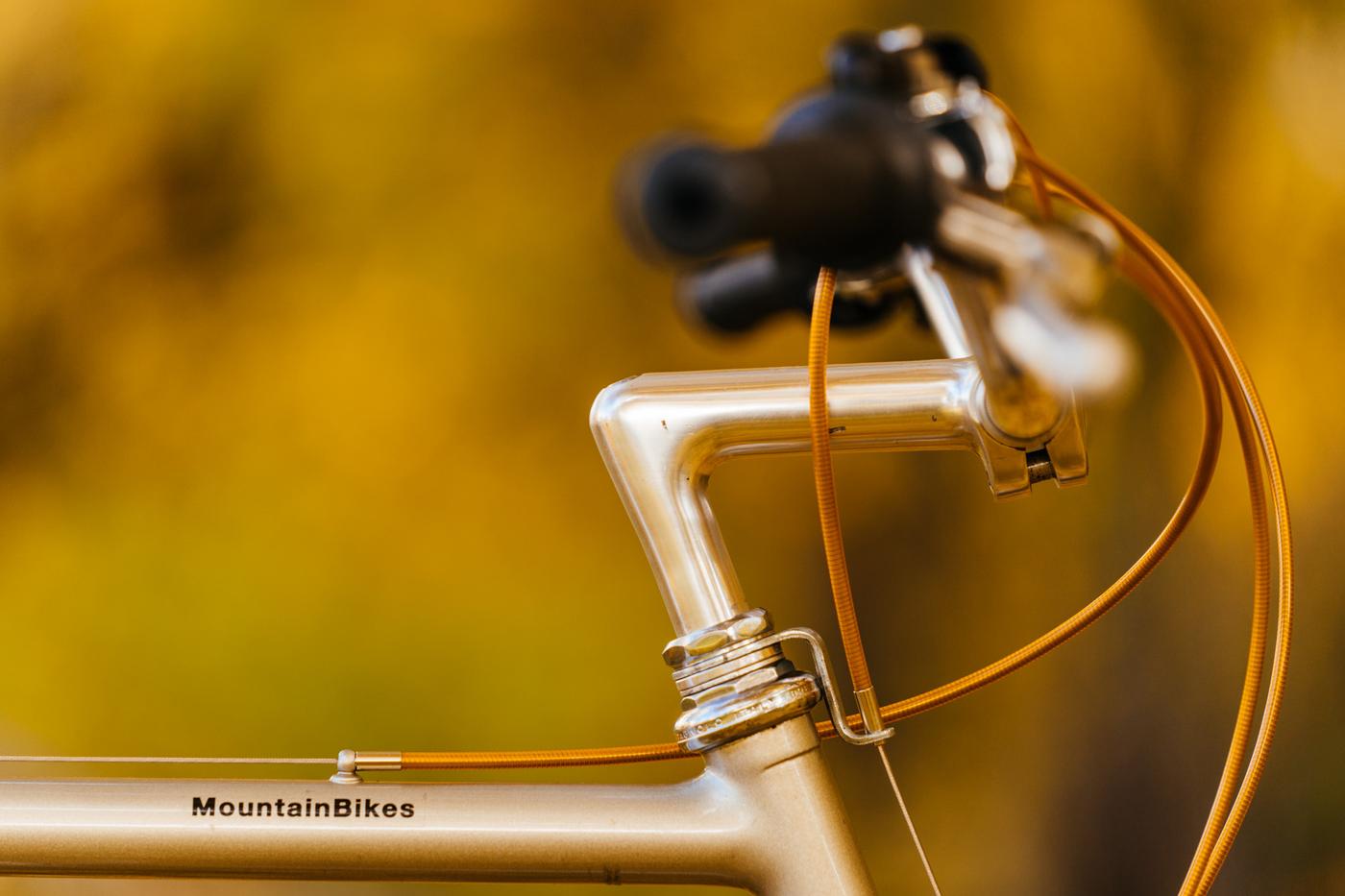 The cockpit is perhaps my favorite element on the bike. Back then, before the Bullmoose, builders would spec a Cinelli 1a stem with a collet. As Tom pointed out in my Everest article, he did not prefer the 1a, which was ultimately one of the main reasons he developed the clamp-on Bullmoose design. Later, Cinelli would adopt a wedge quill design, but in the late 70s and early 80s, the 1a was one of the only options. 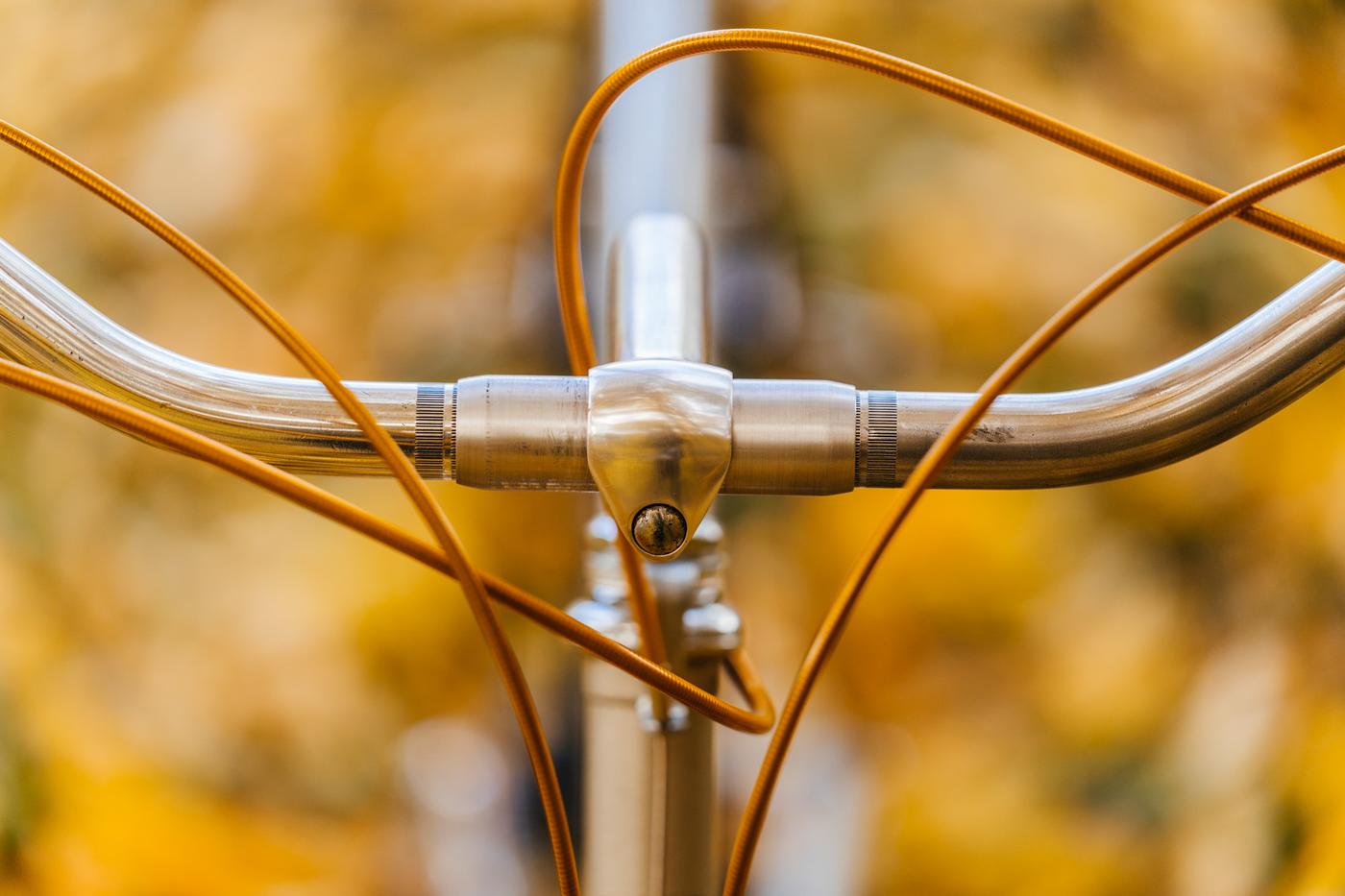 The builder would then make a custom shim for the motorcycle handlebars. Joe Breeze‘s shims were perhaps the cleanest but finding one of those is all but impossible. I posted on Instagram that I needed a 26.4mm to 22.2mm shim made, preferably in New Mexico. A fella named Wes responded and obliged. His shim bites onto the double knurling typical on 7/8″ moto bars of the era, creating a solid, slip-free feel. 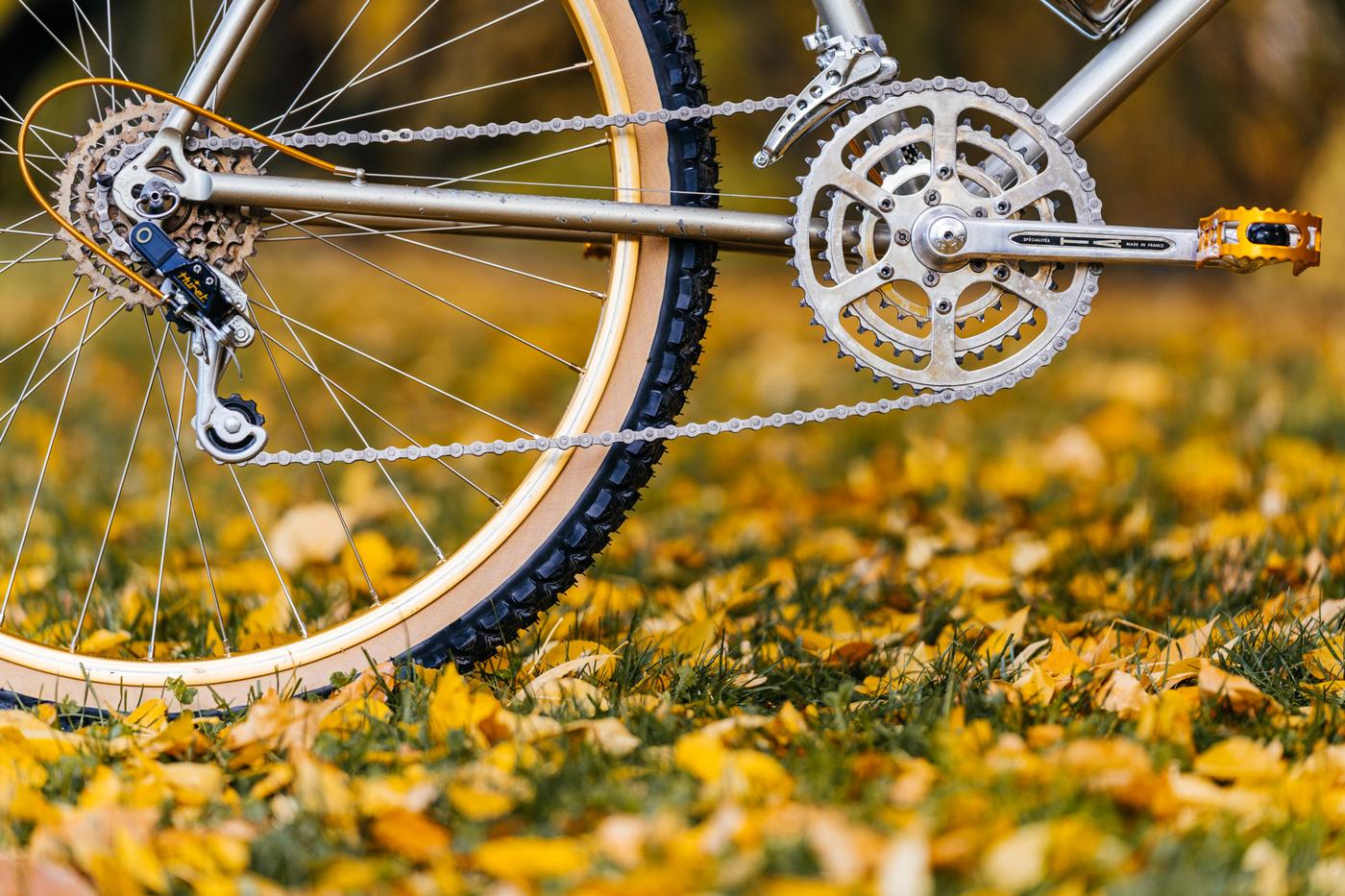 The French touring Huret derailleur, the Comp V front derailleur, the Suntour Mighty Click shifters, and Suntour Cassette were all bought on eBay. Some were even NOS! It’s wild to think you can buy a complete derailleur/shifter set for less than $100! Of course, you must be more mindful of the shifting, but again, this is a MOUNTAINBIKE, not a racing bike. It’s made to meander. 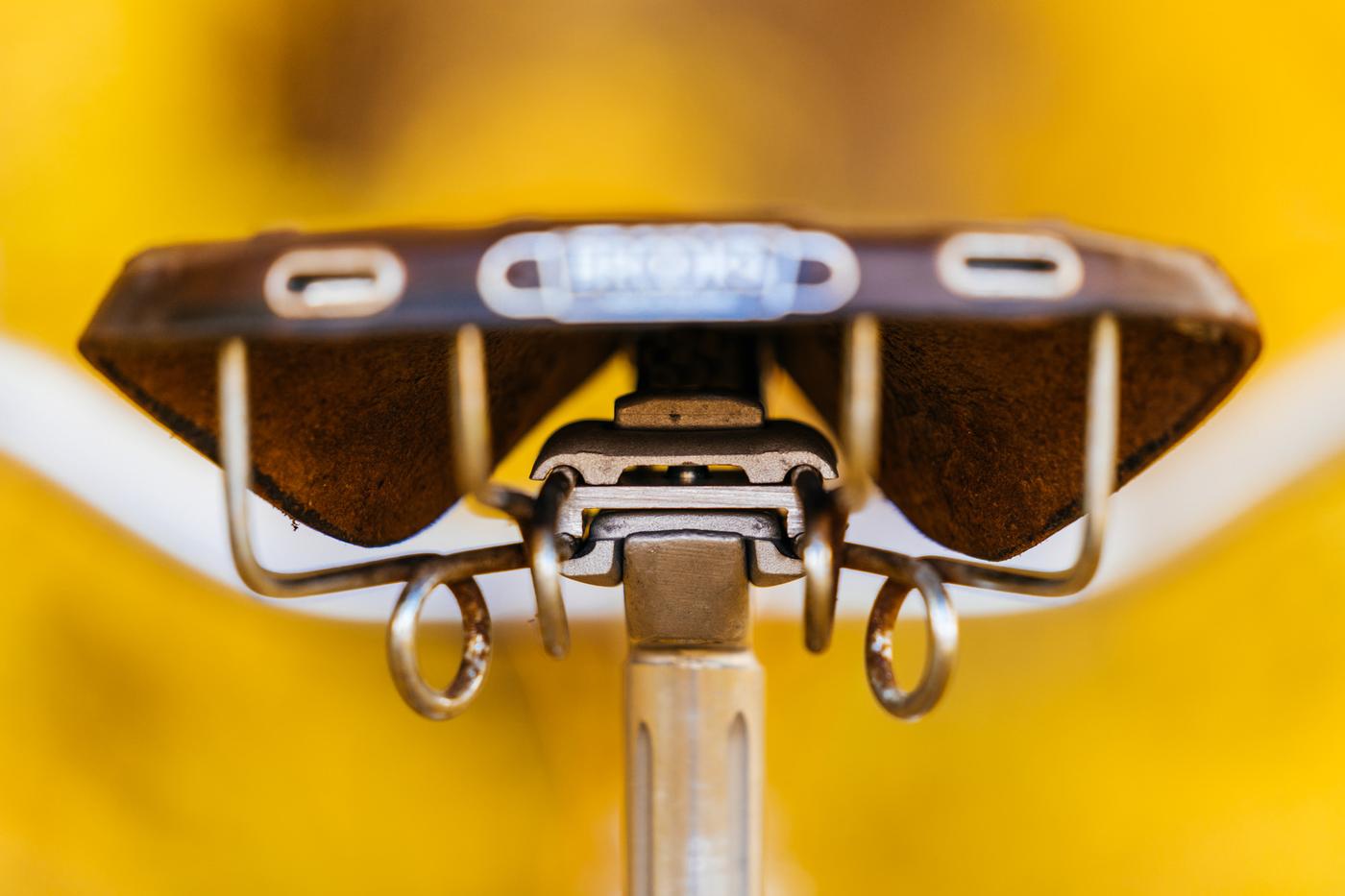 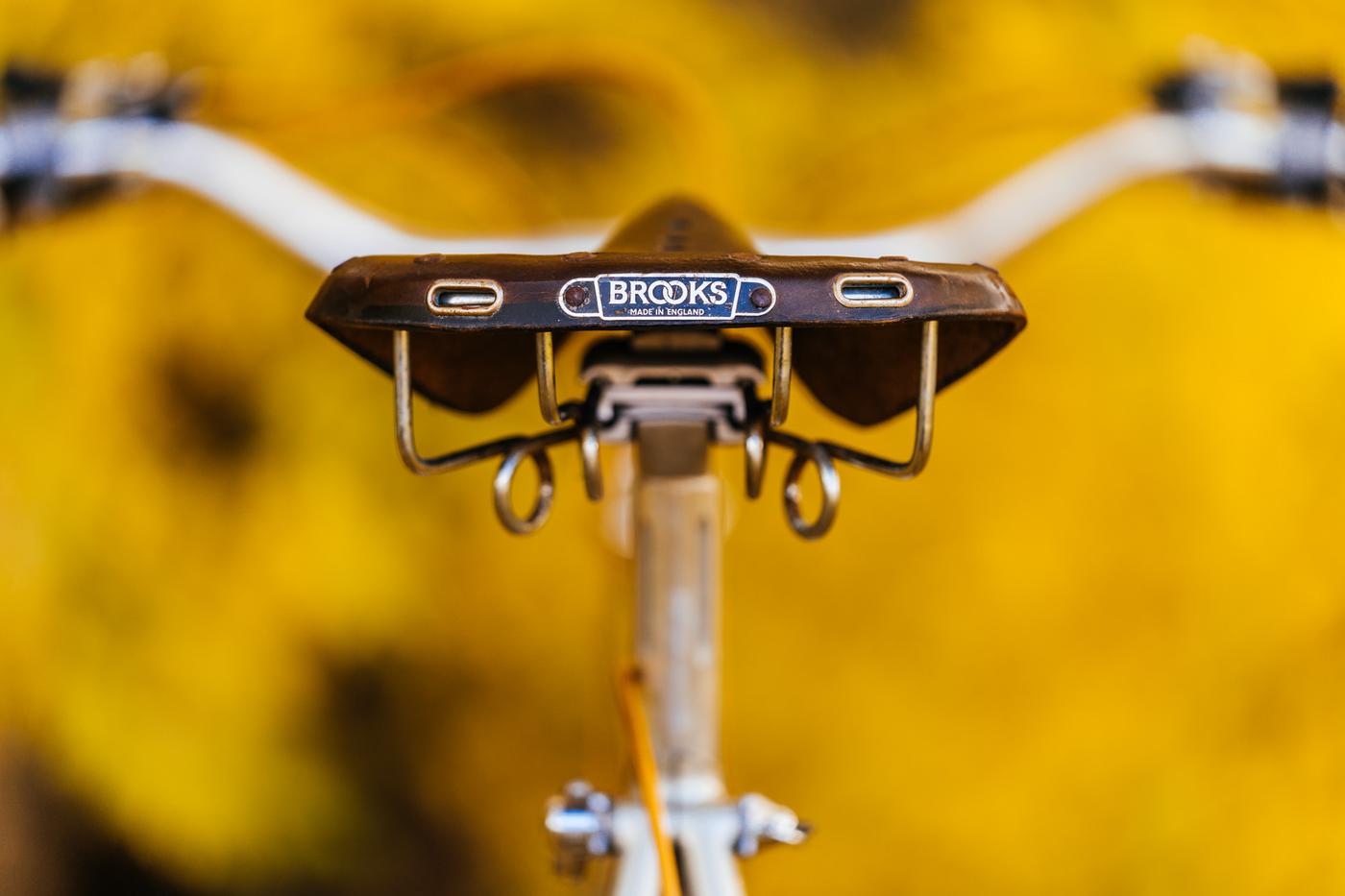 The Brooks B72 saddle and SR Laprede seatpost are made compatible thanks to the unique hack of a Joe Breeze Seat Sandwich. This aluminum plate allows for single bolt seatposts of the era to clamp double-rail Brooks saddles—like this B72! 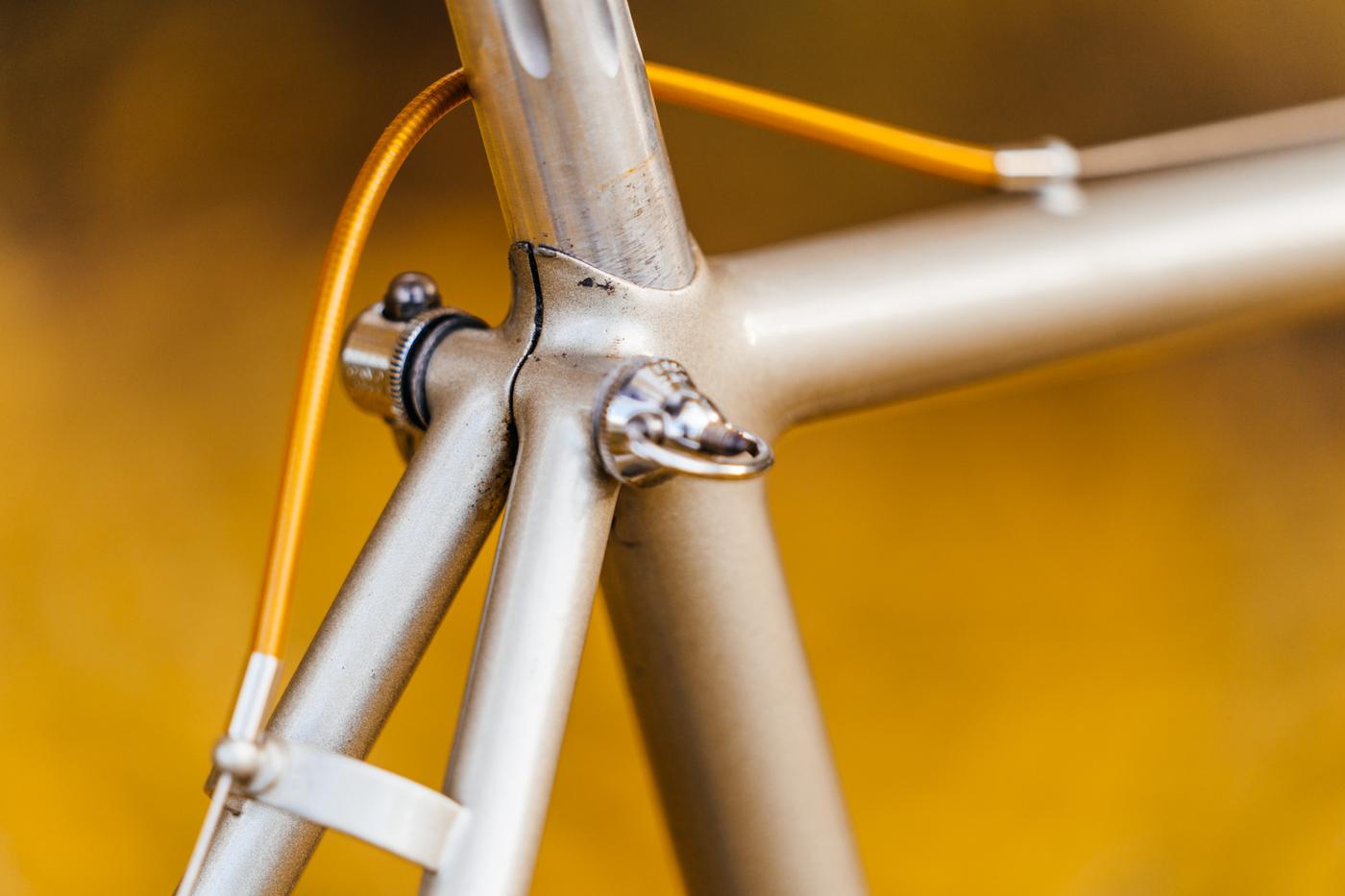 Believe it or not, one of the hardest components to track down was the ‘flat’ Campagnolo skewers from the late 1970s. It took a few hail-mary phone calls to my friends who build up vintage road bikes before they directed me to a seller on eBay who usually has some kicking around. 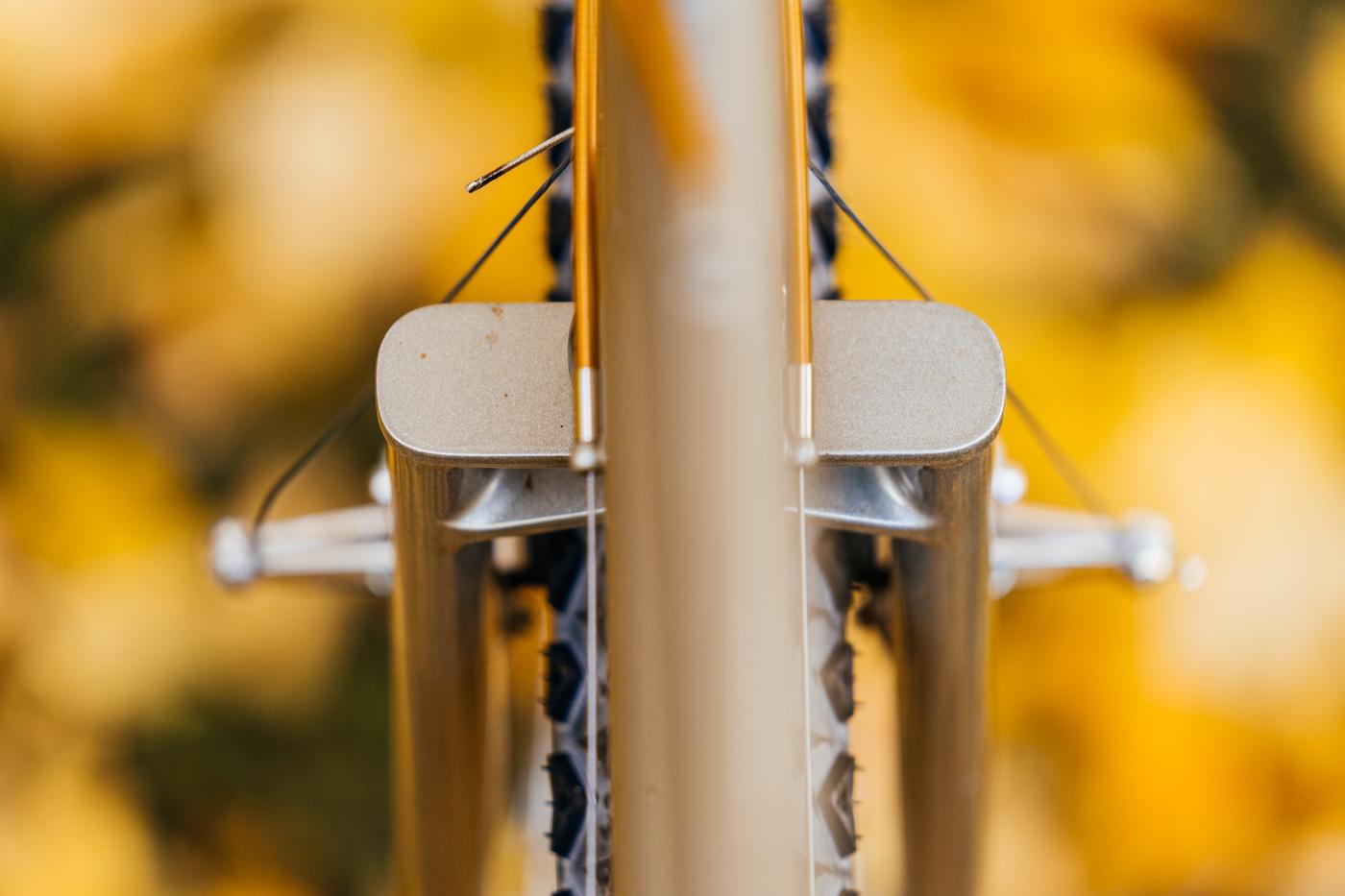 Throughout the build and sourcing process, each conversation I had with the component sellers, the collectors who pointed me to the correct sources, and with Tasshi go to the legacy and story of this bike. Without many of these stories, it would still be just a pile of parts in my office. 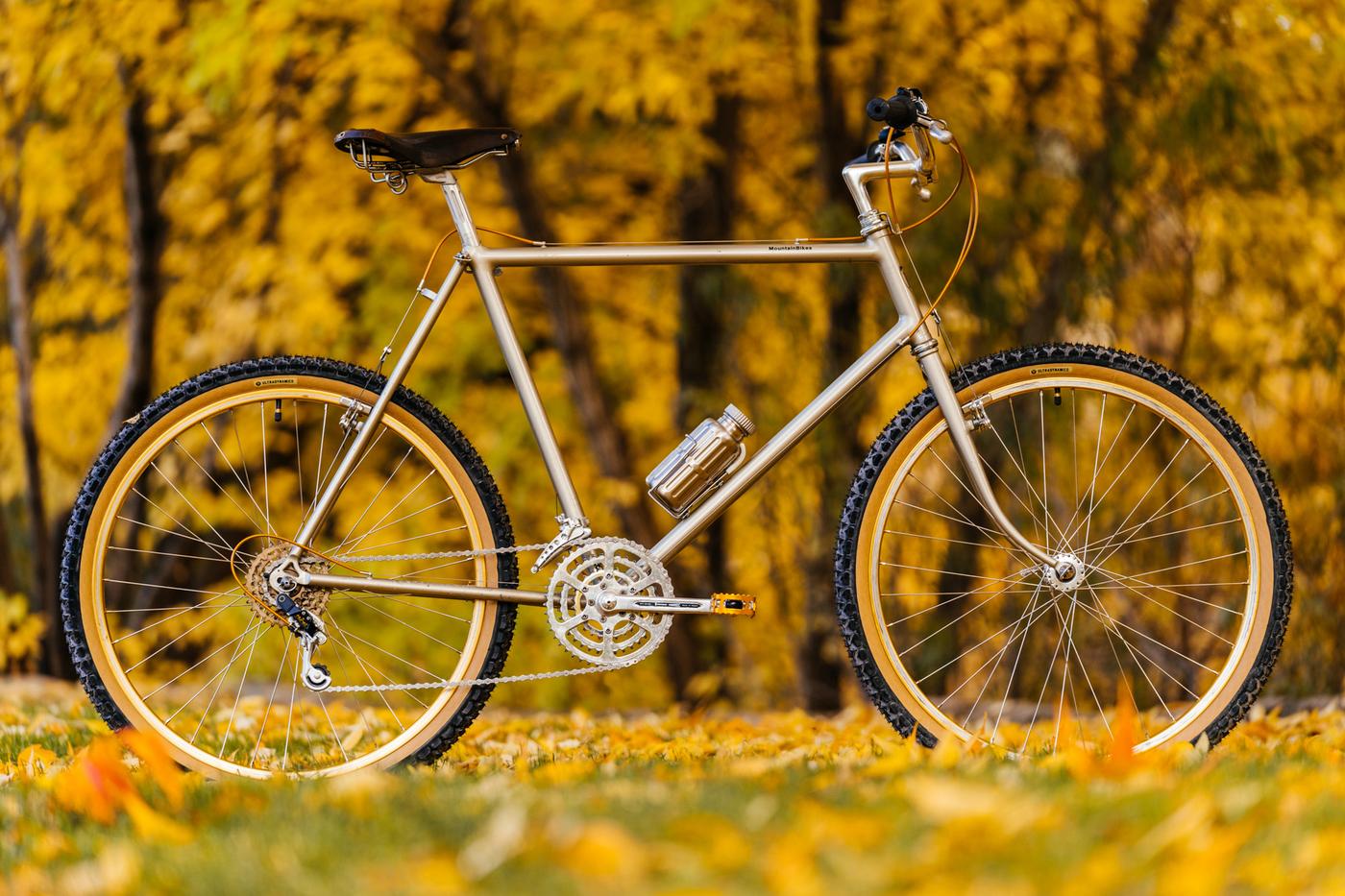 Golden Light for a Golden Era

Initially, I was worried I’d miss the leaf change in town as the bike wasn’t ready to be documented yet. A free Saturday afternoon finally afforded me some time to get to work finishing the project at Sincere Cycles. The last step was soldering the cable ends. As a common practice in the 1970s and 1980s, I wanted to incorporate that extra detail into the finished build.

It’s a reasonably straightforward process involving sanding the cable ends, covering the sanded ends with high-acid flux, and then soldering silver onto the cut ends, thereby sealing the cables and preventing them from fraying. It was my first time doing this, and it’s something I’d love to incorporate further into my builds. Once it was all buttoned up, it was ready to shoot amongst the autumnal bliss. 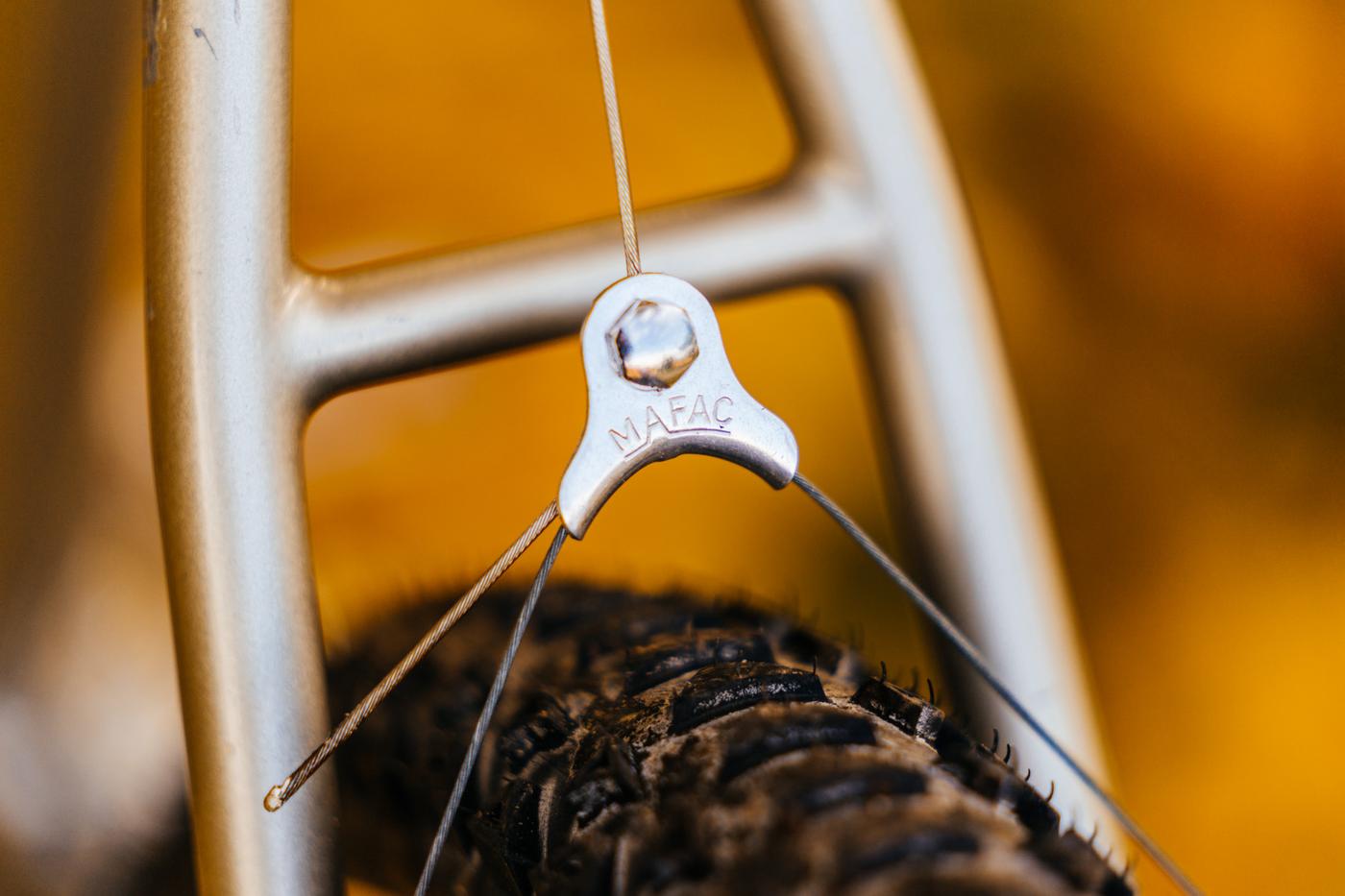 On a Sunday afternoon, Cari and I rode out to a nice spot in town and spent an hour or so shooting the bike on a bed of golden leaves.

This era of mountain bikes has strummed my heartstrings. These bikes were for exploration, long days in the mountains, and riding high country double track. It was before the racing-oriented NORBA geometries of the 1990s and long before suspension. These klunkers are still some of the nicest bikes you can throw your leg around today, and even with triple cranks, friction shifting, and rim brakes, they are incredibly capable, only requiring a slight change in (modern) riding technique.

While this frame is a bit small for me, I can ride it with a longer seatpost from the mid-1980s. Still, for aesthetic purposes, I wanted these photos to look like they could have come straight out of a 1980s catalog, so the correct seatpost is shown here. I’ve put some feelers out with some collectors to let me know if they ever find a 23″ or 24″ 1980 frame, so we’ll see!

In the meantime, I’ve been enjoying taking it on our in-town singletrack and really feeling the frame flex in all the right ways. Riding it is a reminder that I began documenting bikes because of the people that make them so unique. Tom, Joe Breeze, and other builders of the era were onto something…

Unfortunately, this frame is too small for me and it’s been a painful realization but I’ll be selling it at some point. For me, the process of building up a 1980 Ritchey, and documenting it has been so fulfilling. One day I hope to come upon a 23″ or 24″ 1980 frame. If you’re interested in buying the frame+fork, drop a note in the comments… 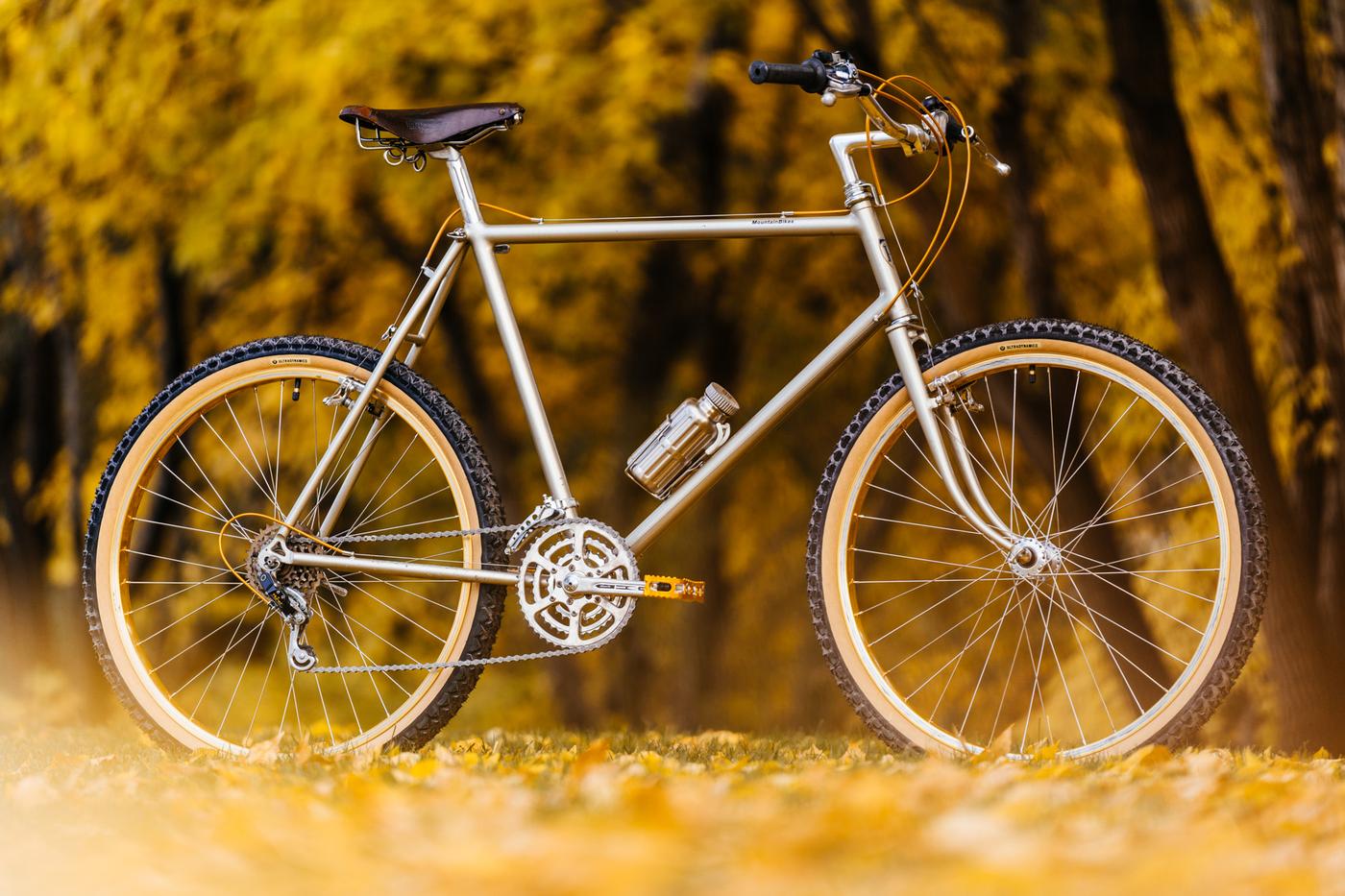 Many thanks to David, the seller of this frame, Tasshi from Vintage Mountain Bike Workshop, Bailey at Sincere Cycles for the workspace, and my lovely wife Cari for being so supportive of this hobby/obsession/cult… ;-)