Tyler and Spencer stitched together a multisport overnight in the enigmatic Cochise Stronghold in Southern Arizona. The duo combined some of the best single and double-track riding, along with a squeeze through the popular Inner Passage, making one epic lap around this beautiful mountain range. Be careful if you’re claustrophobic because this gallery is tight! 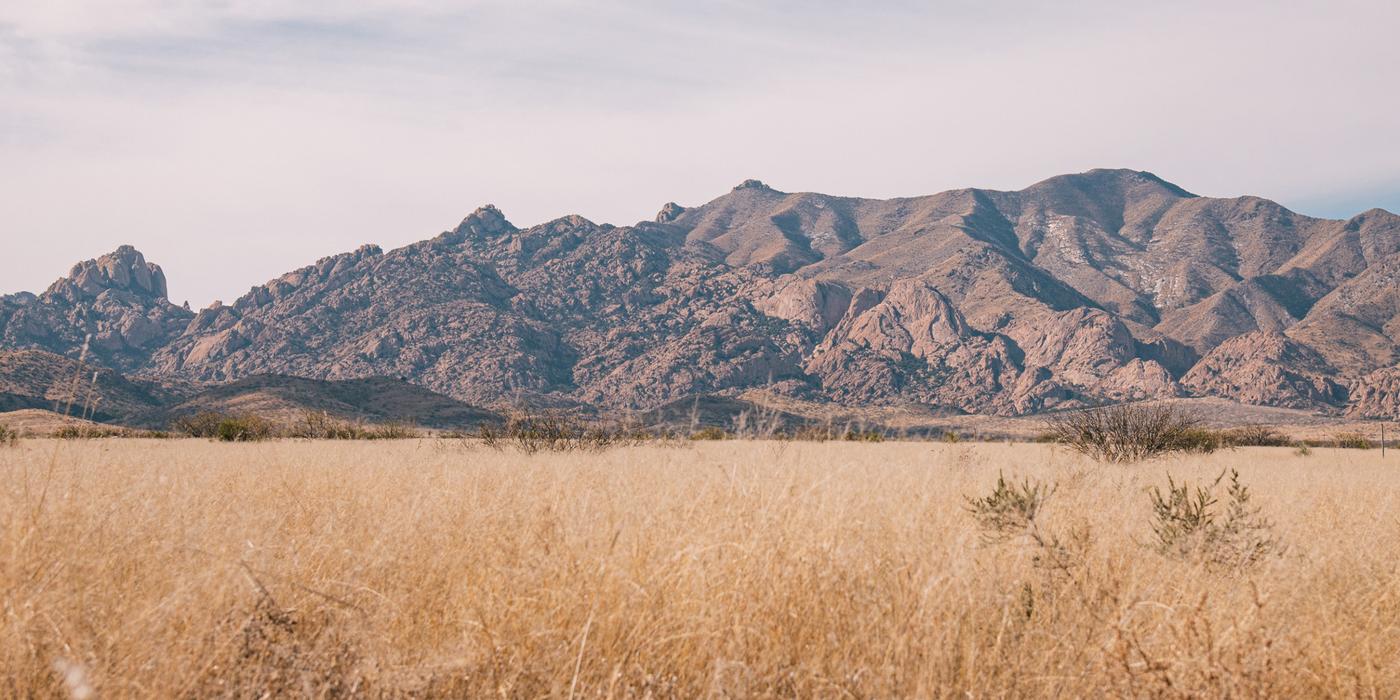 Cochise Stronghold is typically known for its popular rock climbing routes, yet there is some truly breathtaking bicycling to be done there as well. While I’m not a stranger to biking with a whole rack of climbing gear and a rope, my bud Tyler and I figured we would leave a majority of the gear behind for a mini-multisport-adventure. The plan was to bike around the range and “climb” the famed Inner Passage route. Could they have been done separately? Yes. Was it more fun to senselessly link them together? Also yes. 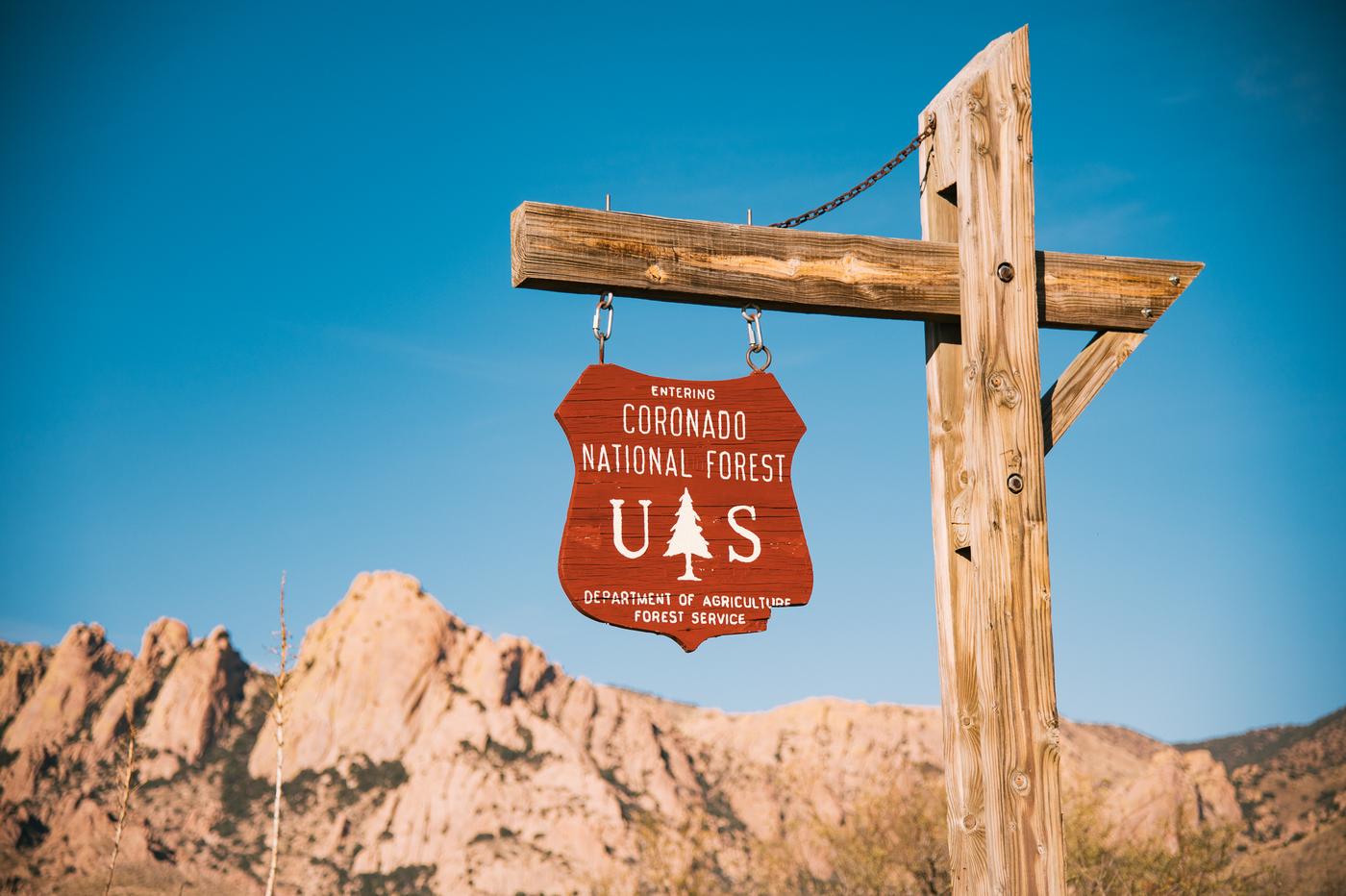 This range was officially named as the Dragoon Mountains, the namesake of the 3rd Cavalry Dragoons, who were the first mounted soldiers in the United States Army. The cavalry established posts in the area in the mid-1800s. It reeks of erasure to call a mountain range famously known as “Cochise Stronghold,” instead of the Dragoon Mountains. The massive domes and steep valleys provided an unparalleled natural fortress, so much so that the army was never able to fully drive the Apache from the area by military strength alone. The Chiricahua were lied to about returning to their lands and today are still scattered among a few reservations, none of which lie on the original lands they were provided in what is now Cochise County.

Rock climbing in Cochise is world-renowned for its beauty and difficulty. Routes are frequently sparse in their protection and even when there is something to help protect you on the large granite slabs, it may be a small nub of rock referred to as a “chicken head.” A local ethic of minimal bolting has led to the area being much less developed than one would expect, which keeps the lines clean and rock less perforated with permanent hardware. For our “climb” on this trip we have ventured to the “Inner Passage” route. The route bisects the Rockfellow Dome and Chay Desa Tsay. It is less of a climb and more of a squeeze requiring only climbing shoes (recommended) and knee pads (highly recommended). There are few opportunities to use a rope but the added protective gear would make the squeeze much harder. If you decide to attempt this route, I highly recommend going with someone who has done it before and that you have previous climbing experience. We park my truck on the east side of the range near the end of the Cochise Divide trail to embark on what I would call the “meat and potatoes” of the long-standing Tombstone Hustle Route. Since Tombstone is a tourist trap—with the miles of riding from town to the Stronghold providing plenty of opportunities for getting dusted by jeeps—we decided to stay close to the cool rocks. We roll south through the outskirts of Sunsites, AZ, and passed the thriving metropolis of Searleville, which has an appropriate dog-to-human ratio. The very reasonable grade over Middle March road plops us out on the west side of the range where the impressive Sheepshead Rock massif dominates the view for miles.

Tyler and I climbed a route on Sheepshead last year and, upon returning to the parking lot, we saw an older blonde surfer-looking guy heavily dissembling his Volvo under that shade of an oak. While riding down the road he passed us again, one year later. These mountains have a strong pull for rock climbers who return every year for the ideal winter temperatures. 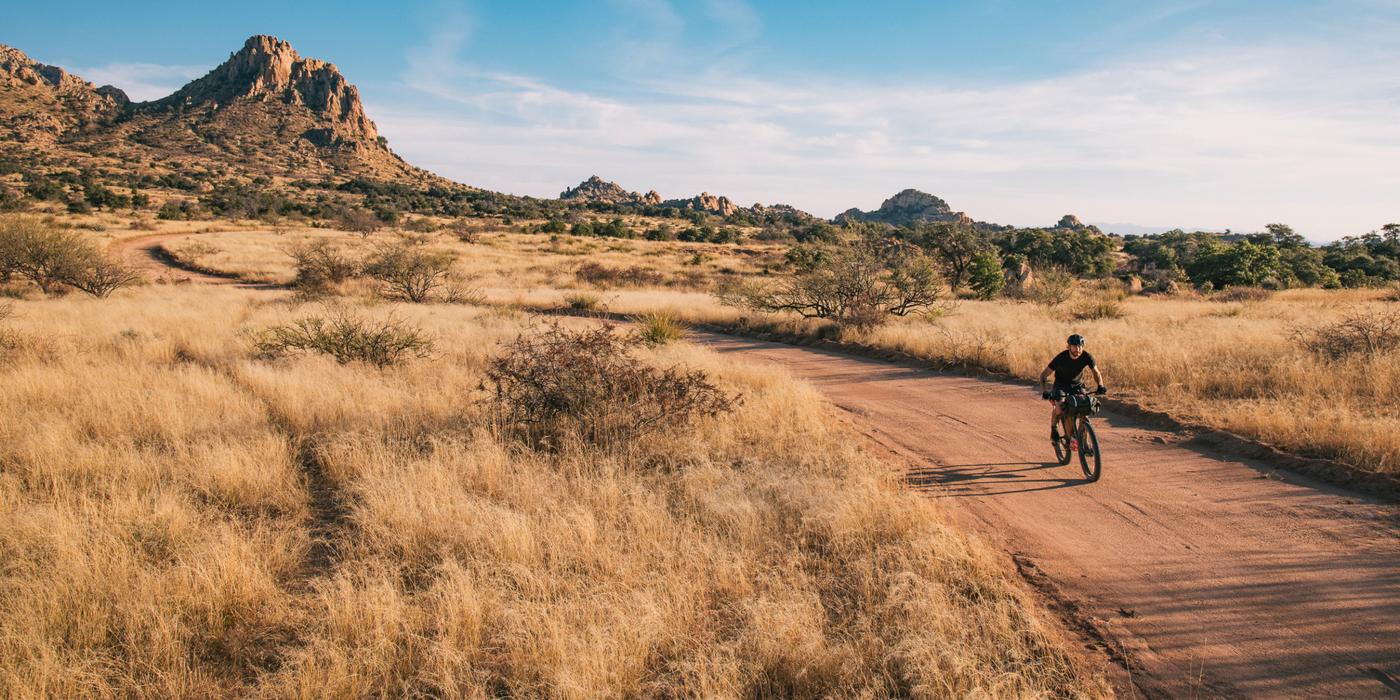 The Forest Service Road on the range’s west side is one of my favorites to ride, especially at sunset. The golden tall grasses littered the bones of Yucca blooms, and Oak trees sprawl out until the Monzogranite domes thrust upward from the earth. We pass multiple streams with water trickling from a storm the day before. As we near the end of the road, the path turns to loose baby-head-sized rocks. In the past, I’ve found it easier to just pedal these miles rather than slog in a vehicle. We reach the dispersed sites at the end of the road, and to my despair the creek is dry. I got cocky and didn’t pack enough water to dry camp for the night expecting the creek to have some water after the storm. 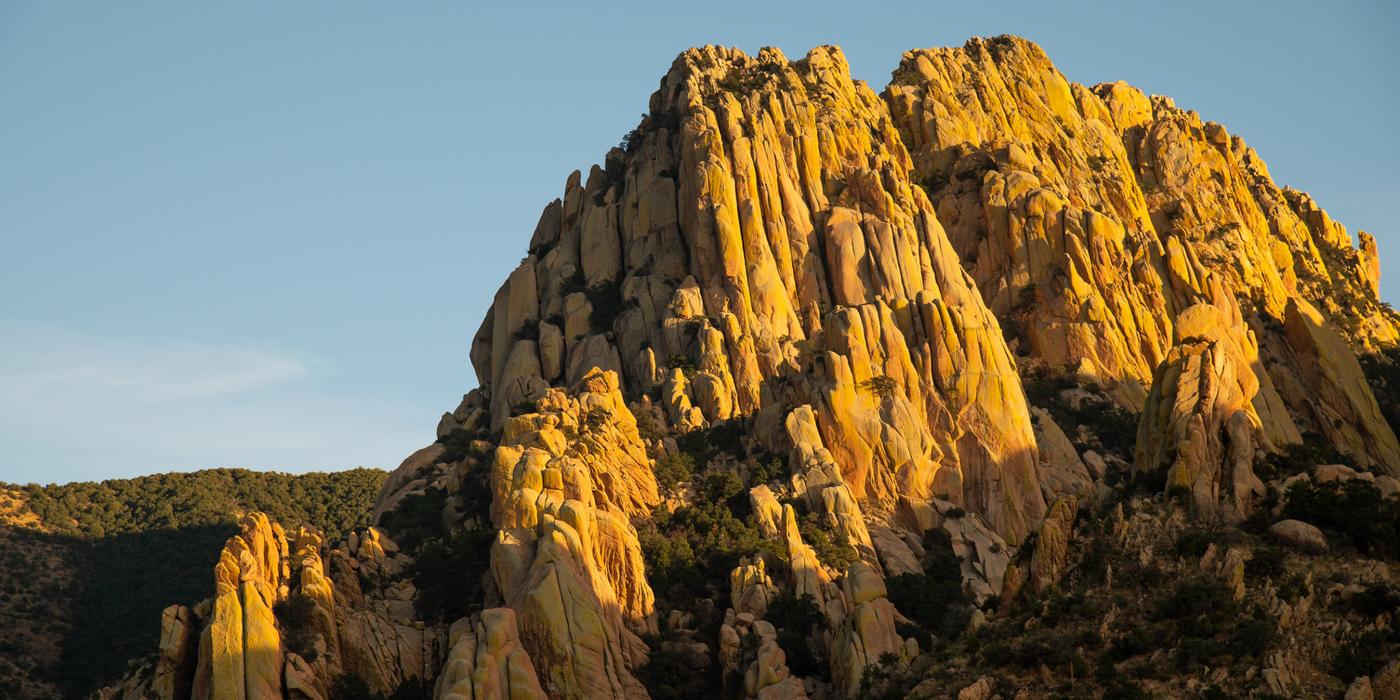 Tyler is calm as always, we just head up a trail following the creek bed. Half a mile up we find a small rock pool with enough water for us to filter. Relieved, we pop out of the wash and head toward a few nearby domes to watch the sun do its last dance. The colors in Cochise are truly mind-boggling. Many of the Monzogranite domes are covered in neon yellow and blue lichen depending on the orientation of the face. Like most places in the desert, it dissolves into a brown mass from afar but upon closer inspection, it becomes a cornucopia of colors and textures. I’ve been enraptured with this place since I first rode here in 2016 and I’m still taken aback every time I get to be amongst the domes. With our water bottles full and consciousness alleviated, we scramble down in the dark to settle in for the evening. The west side of the Stronghold Divide Trail is a series of fits and starts with 60% being a hike-a-bike interspersed with short moments of pedaling. This is probably hampered by our fully loaded bikes, but some of the grades and switchbacks are unrideable except for you trials riders. We stash our bikes at the beginning of a climber’s trail meant to access Cochise Dome and The Rockfellow group from the west. I snag my climbing shoes though Tyler is braver than I am in his approach shoes. We both pack knee pads, nonetheless, for the extended chimneying ahead. I swap my lens for a fisheye (shout out Corbin Brandy for inspiring me to snag one of these again) which will make photographing the very confined spaces more exciting. We schlep up to the dome, drop some water and snacks at our exit and start the traverse. Even the climbing trail to get to the start is pretty spicy for scrambling and, distracted, I miss our starting point by a long shot. This place is a literal maze and, while I have climbed the Inner Passage Route before, I had still lost my way. Finally, we found the start, which is a low-angle 5.3 slab that goes straight up in between the domes. It’s just steep enough to give you some pause, as you don’t want to roll 30 feet down the slab to even more boulders. After lots of grunting and complaining I drag myself into the thick of the route. For the non-claustrophobic, the interior of the domes is magical. Two feet wide at most, the domes soar hundreds of feet above us with the chasm barely widening as it goes. As we continue through the passage we reach the squeeze of the route which narrows to under one foot wide. Neither of us can pass any further, even sideways. We chimney up the chasm, using our feet and knees (hence the pads) to brace our body as we move up until it is wide enough for us to continue traversing. We need to go about 20 feet up and 100 feet over to get through the squeeze. On the other side, mesmerized by the chasm, we scramble out of the void. We eye a few unfathomable routes that start in the passage and climb up through the domes, which appear harrowing, to say the least. We find our water and snacks and sit back for a minute to watch some climbers on the route Endgame. One day, when I’m stronger than I am now, I would love to return and attempt it. Back to our bikes, it was finally time for some riding. A few lovely exposed rock sections, creek crossings, and amazing views shepherd us back to the east side of the range. The trail is techy on fully loaded bikes, but it’s manageable. There are plenty of hoots and hollers as derailleurs narrowly escape thin rock chutes and baby head rocks slide out from under locked-up tires. Hearts full and bottles empty we return back to my truck, with less than 40 miles under our belts. But who cares, we had a great time!