We were pedaling up a steep pitch on the dirt road where Emily Kachorek now resides in Patagonia, Arizona, when she leaned over and said “this is just my old ‘cross racing bike, not a gravel bike” and we chuckled together. Emily relocated to southern Arizona last year to reconnect with herself after leaving her career as a UCI professional cyclocross racer. As a co-founder of Squid Bikes, she’s raced this bike globally: China, Australia, and Japan. In its current build, this V2 Squidcross is very close to UCI-spec she raced between the ribbons and through the mud, sand, and off-camber chicanes, save for the tires.

During our time together in Patagonia, we had a lot of conversations about life, ‘cross, and this thing everyone calls “gravel.” Which prompted me to photograph her beloved steed and write about it here… 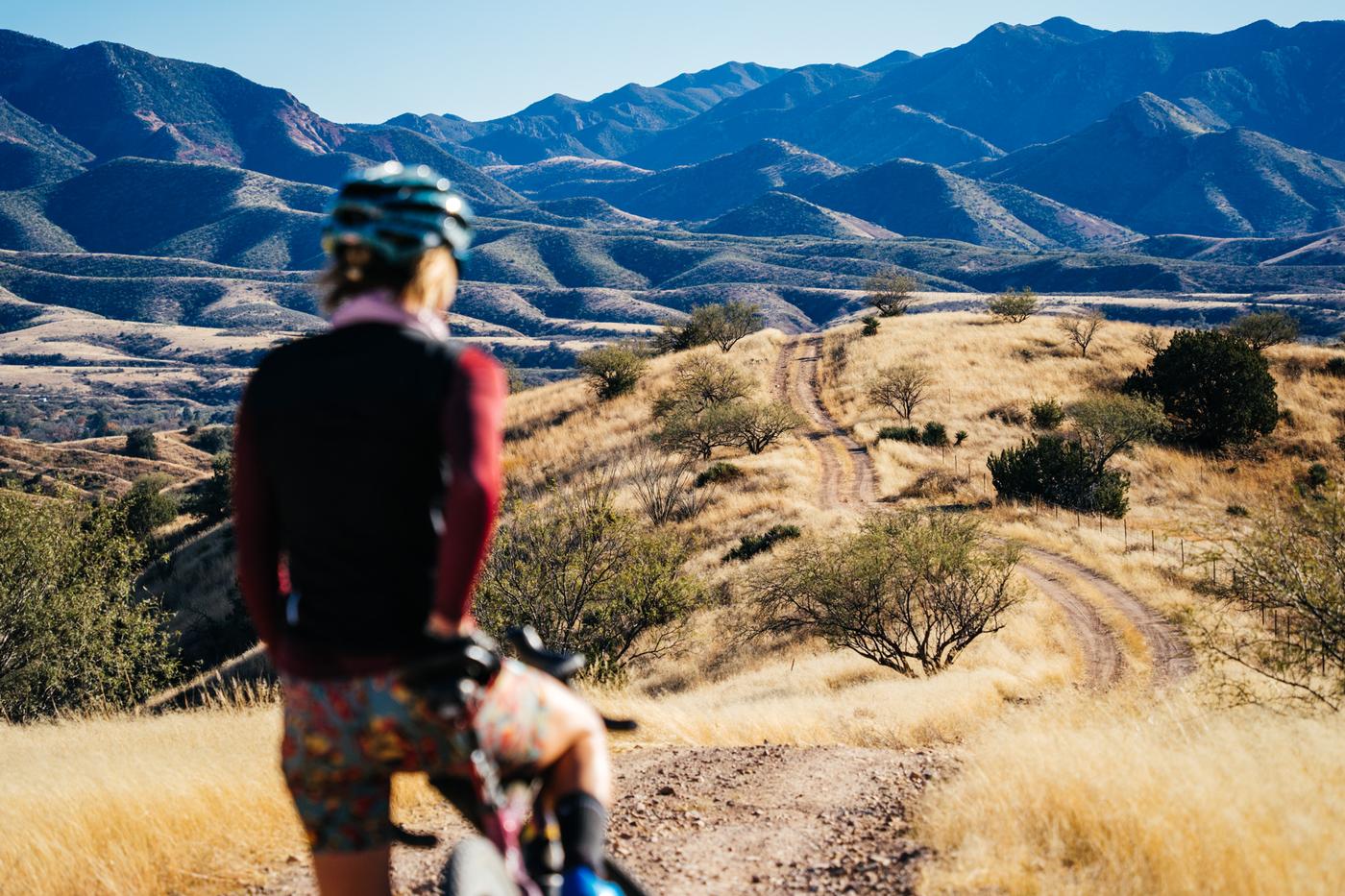 Bicycles + Dirt = A Legacy in the Making

Look, riding dropbar bikes on dirt roads ain’t nothing new. Even in the early days of velodrome racing in the UK, racers would pedal their fat-tire path-racer bikes to the track, race some hot laps, and pedal home along the same hiking trails enjoyed by pedestrians. The same can be said for the early days of ‘cross-racing, where racers would pedal out to the races via dirt tracks and trails. Back then, metal toe clips were the norm, causing the bikes to have higher than normal bottom brackets to keep the pedals from dragging in the mud.

Back in the 1920s, with the advent of black-and-white film cameras, race attendees began recording these “endurance” races and mixed terrain shenanigans, so there’s plenty of evidence to support this long running theme of pushing ill-equipped bikes outside of their proverbial lanes. Fast forward 50 years and a group of Marin cyclists took modified beach cruisers up Repack hill to ring in the age of the balloon tire mountain klunker.

My point is, people have long been riding bicycles (of varying degrees of capabilities) on dirt roads, yet we get so hung up on the semantics surrounding the vehicles themselves, not the activity. Is it a ‘cross bike? Or a gravel bike? Or just a road bike? As humans, we love to put activities into buckets, establishing a nomenclature for each, and with it, equipment, apparel, and lore. There’s also probably a certain amount of comfort that folks get with being able to self-identify with a group, based around a shared activity. And, there’s nothing wrong with that so long as the type of bike you ride doesn’t become a limiter instead of a means to freedom.

Watching that video from 1920, can we really say that Marin was the birthplace of mountain biking? 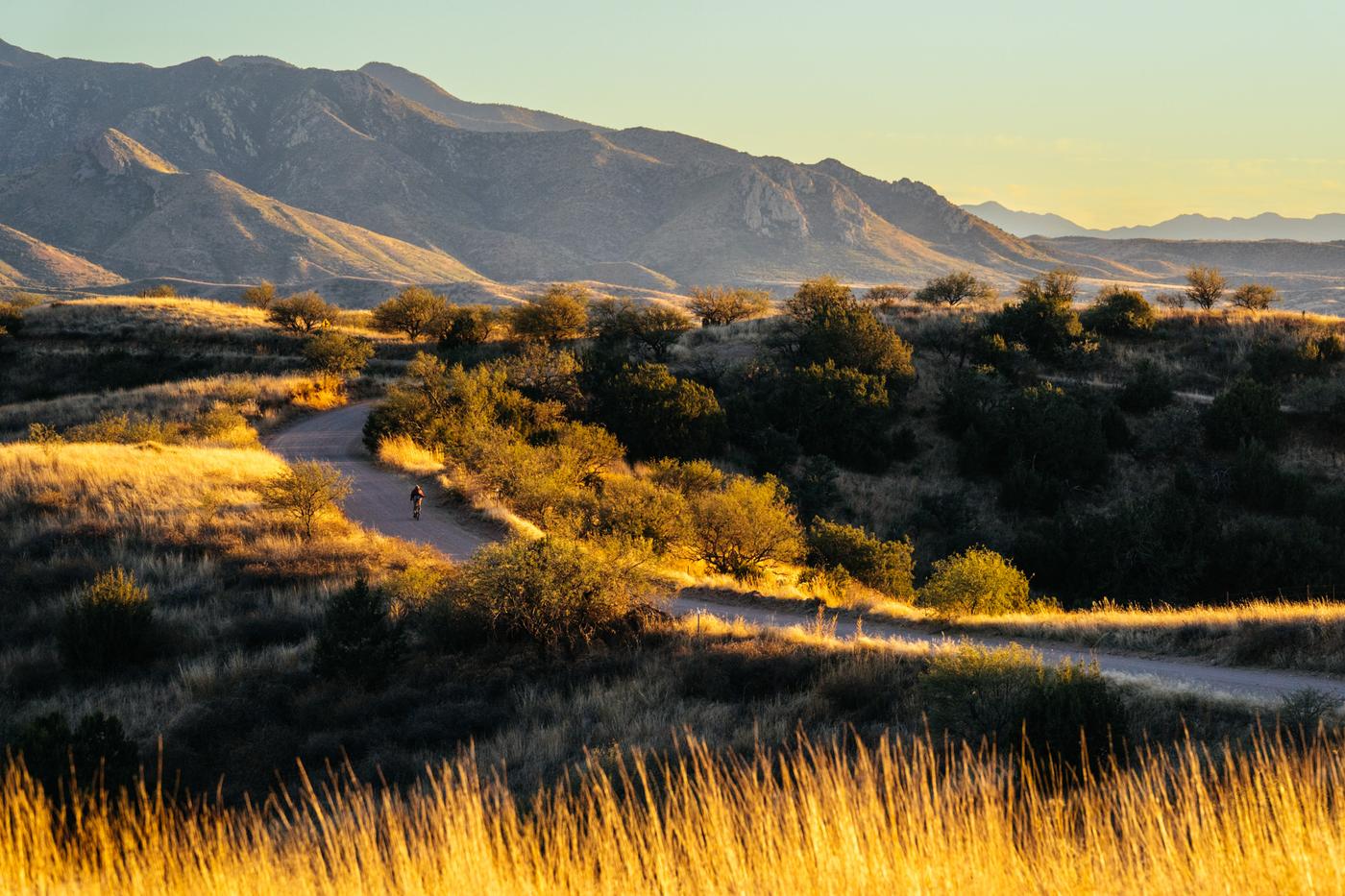 Emily’s furtive comment about riding her ‘cross bike on gravel sent me back to the early 2000s, where I think many of you can relate to what my pals and I were up to. We’d ride pavement out to dirt roads, climb mountains, and ride singletrack on the same canti or v-brake, rim-brake bikes that we’d then turn around and race with on the weekends. Even before our time, plenty of people did the same. This is nothing new.

This burgeoning trend of mixed-surface affinity resulted in gravel races like the Almanzo 100, Trans Iowa, and more, where ‘cross bikes or fat tire road bikes were the vehicles of choice. Soon, brands took note, marketing departments began ideating and a new “genre” or “family” of dropbar bikes was born, labeled, marketed and worshipped as G R A V E L.

Here we are today, in a world saturated with gravel-specific everything, and ‘cross racing seems to be taking a back seat to this new trend. 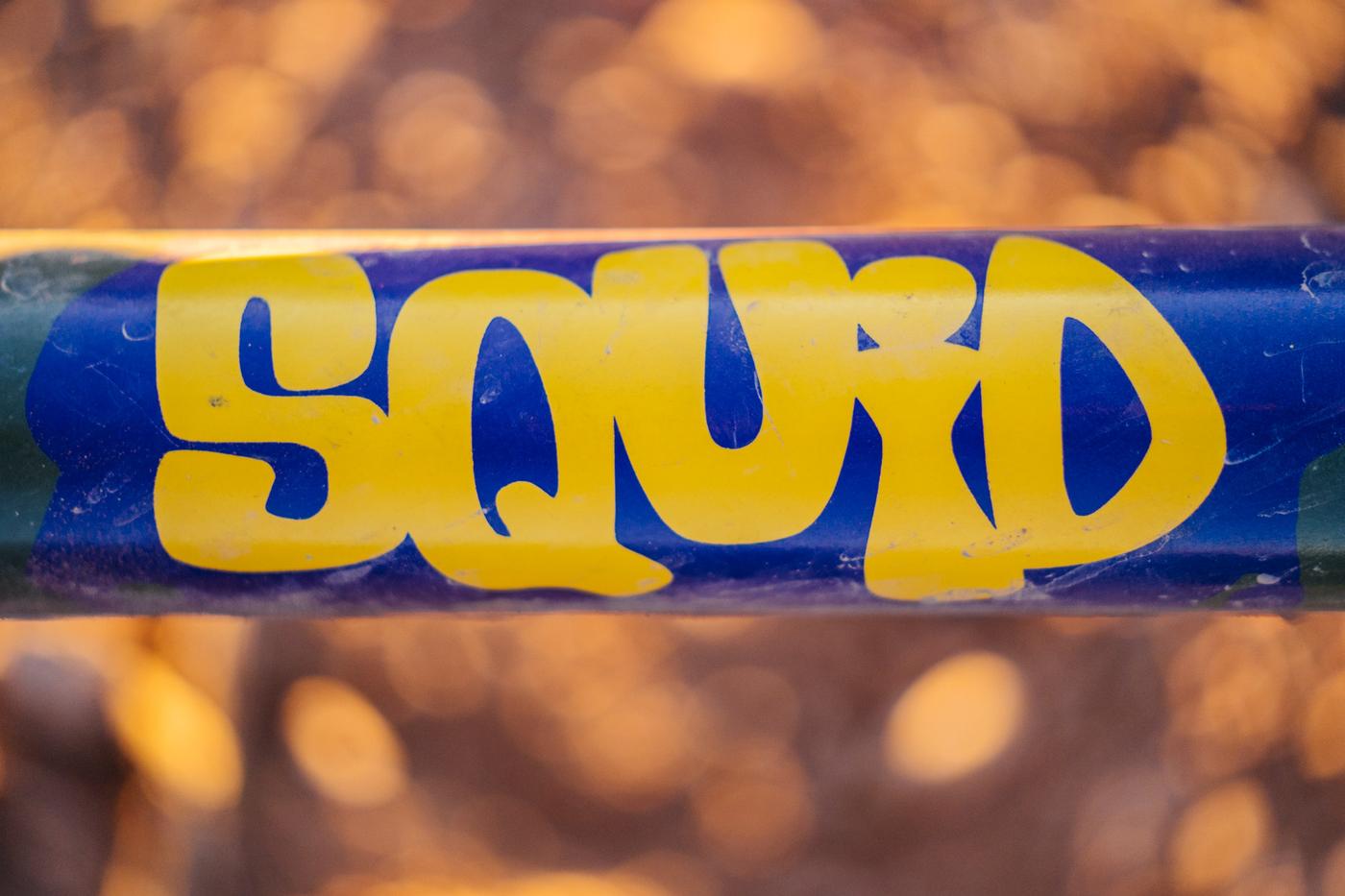 Pardon the history digression (I’m sure you’re all well aware of this), but I found it a compelling conversation. I miss those days of riding ‘cross bikes everywhere. I wrote plenty of articles arguing the versatility of the almighty ‘cross bike before the proliferation of the modern gravel bike. The lack of technology made for some engaging experiences in the saddle. They weren’t always ideal but they were the best we had at the time. You could buy a cyclocross racing bike and ride it year-round. People did this for decades, yet they did have some limitations. 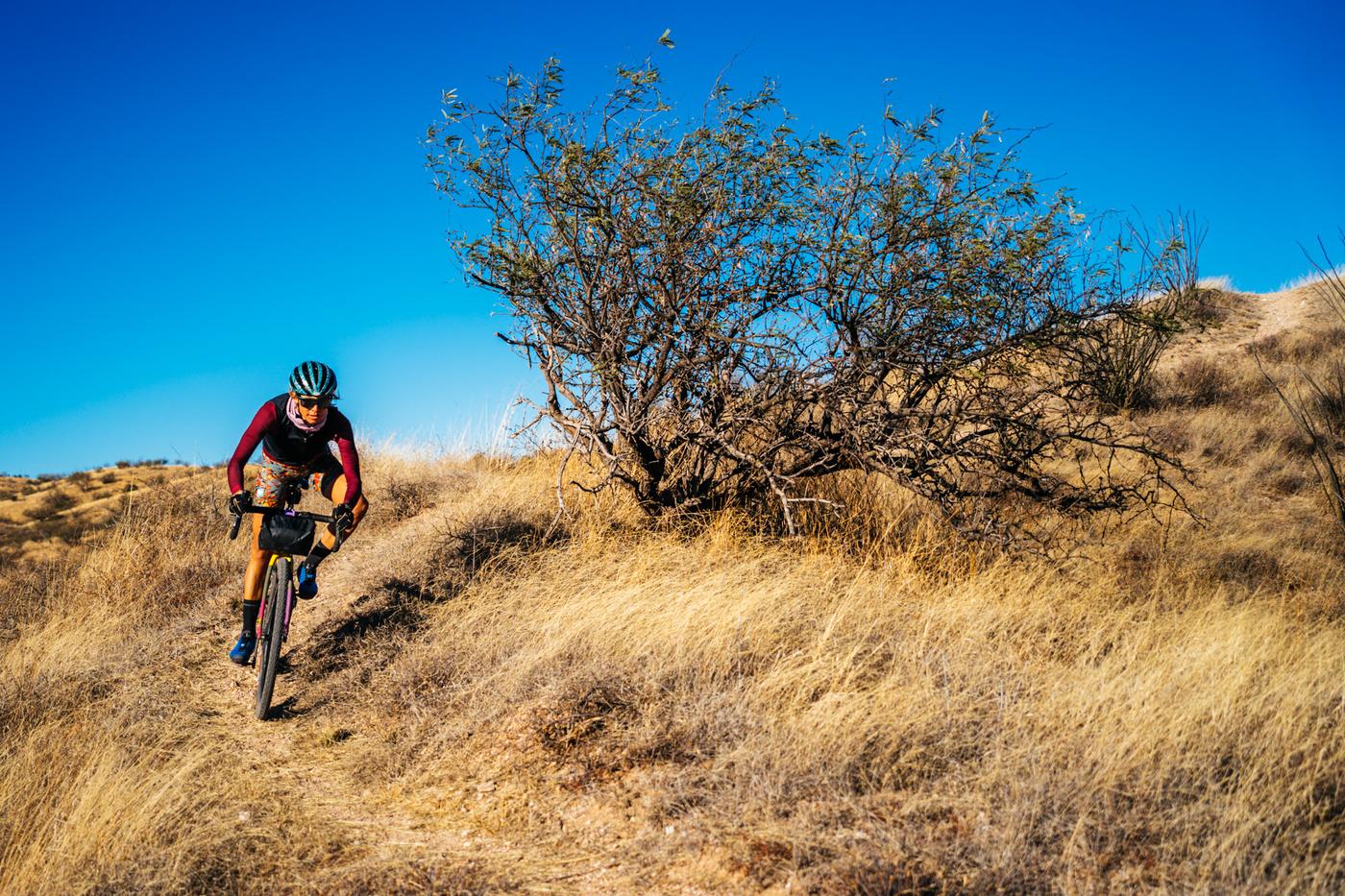 Let me tell you, descending 4,000′ in the mountains of Los Angeles on 32mm tires, with canti brakes and pinned, 42mm wide handlebars was interesting, to say the least. Sure, ‘cross bikes weren’t the best tool for the job, nor do they feel as capable as modern gravel bikes—touting 50+mm of tire clearance and a refined geometry, dialed for riding on dirt—but they were still damn fun during that time. 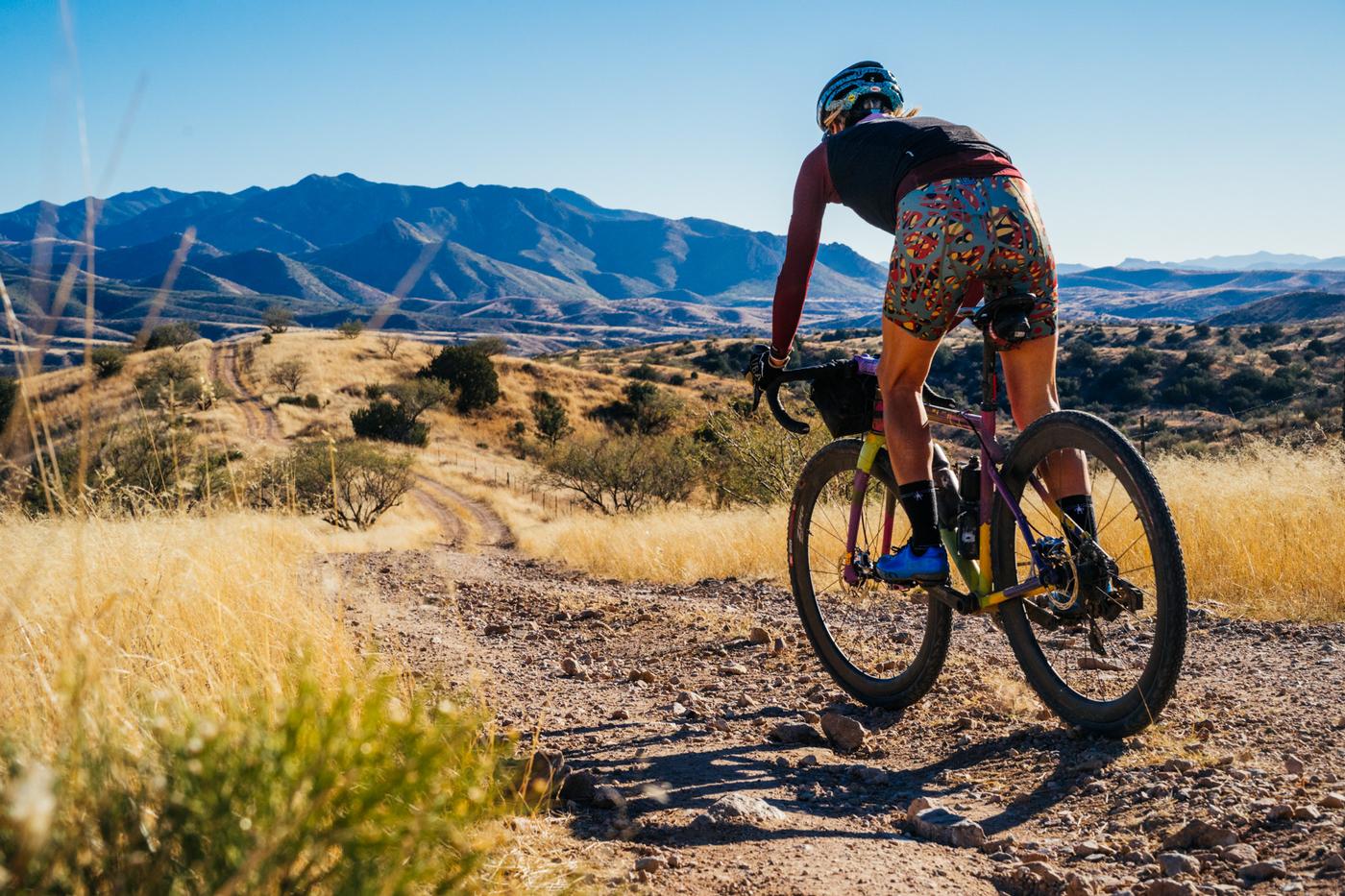 The term underbiking goes a long way over here. Pardon the tropes but without pushing these slightly under equipped bikes in inappropriate terrain, there might not be a gravel movement like we’re in today. The best way to promote inclusivity in a sport or sub-genre of said sport, is to let technology do its thing. Carbon frames offered more options for shaping the bikes, allowing for bigger tires, simplified drivetrains, and a lightweight chassis. These modern gravel bikes tout wider bars, slacker head angles, lower bottom brackets, and slacker seat angles. They’re designed for all-day endeavors, not just hour long muddy drag races. A lot has changed in the world of dropbar off-road bikes. 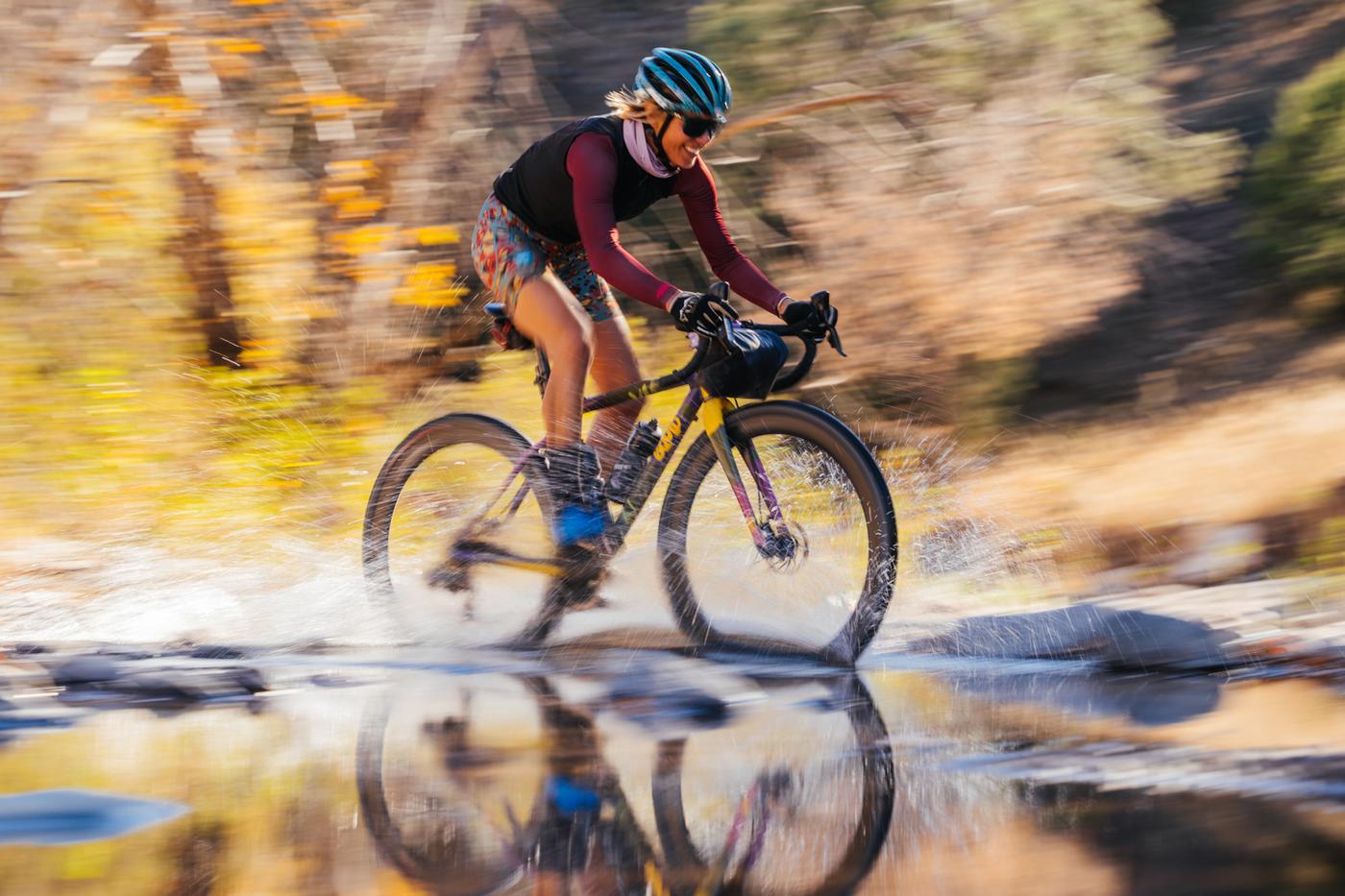 The relentless pursuit of perfection might be the Achilles heel of the cycling industry. As the bikes become more capable, you needn’t pay as close attention in rough terrain. Bigger tires, and even suspension forks make even the roughest dirt roads more manageable. I can’t express how sketchy many of the rides we were doing on our steel, 32mm tire, cantilever bikes. Still, I value my 56cm wide bars, 55mm tires, 1x drivetrains, slacker front end, lower bottom bracket, and duh, disc brakes. Would I take one over the other? It’s hard to say. Nevertheless, I’ll always value the ethos of underbiking and am currently dialing in a rim brake, 32mm “all-road” bike at the time of this writing. 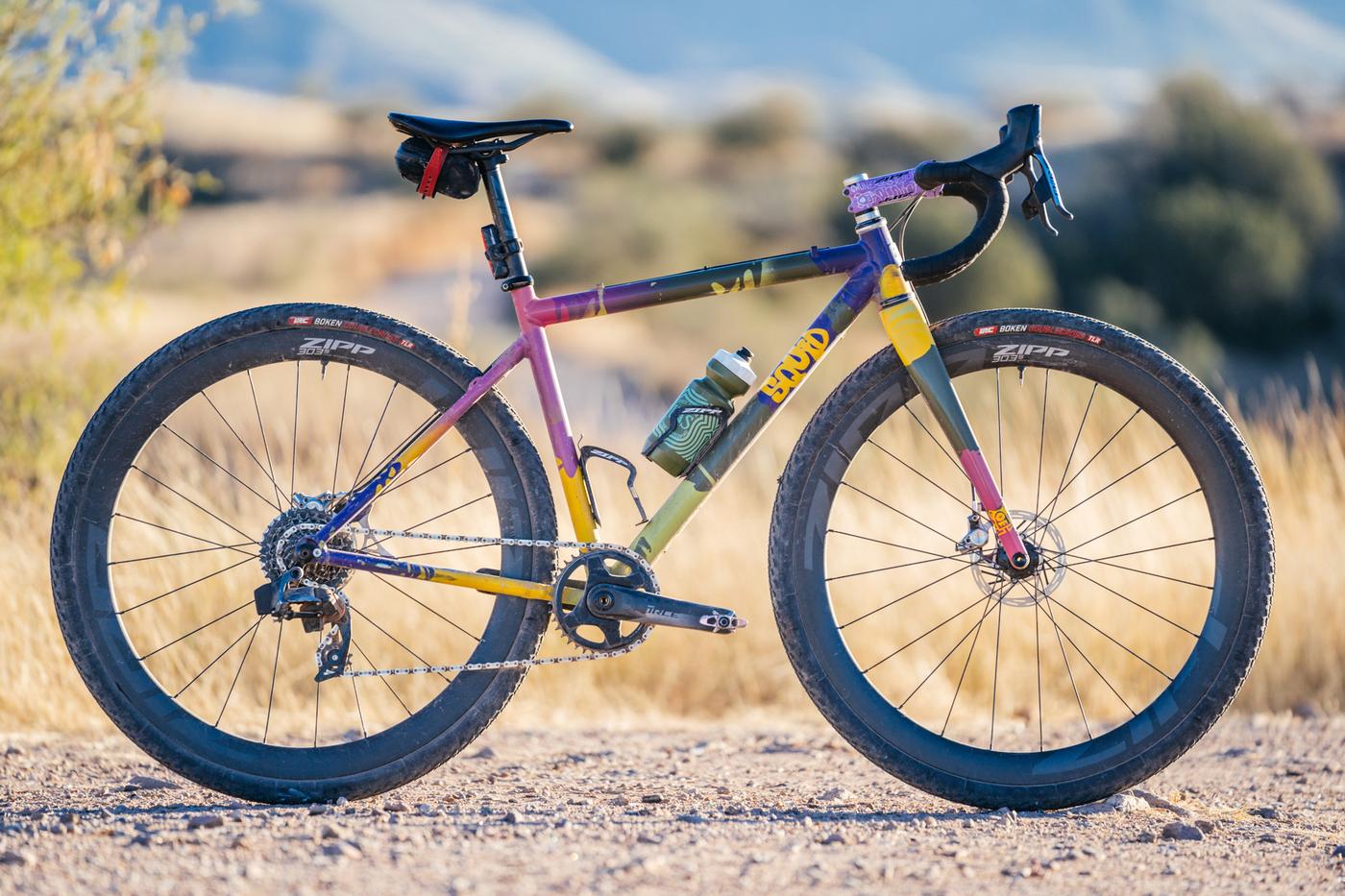 In the same vein, Emily’s UCI ‘cross bike is still a formidable ally in the world of dirt road riding.

These frames are built by Ventana in Northern California and coated with Spray.Bike by the team at Squid Bikes. This particular frame paint job is done by spraying dish soap all over the frame and then painting the bike with Spray.Bike. Once the paint dries, you wipe off the soap, rinse, and repeat to get a nice collage effect of contrasting color layers. 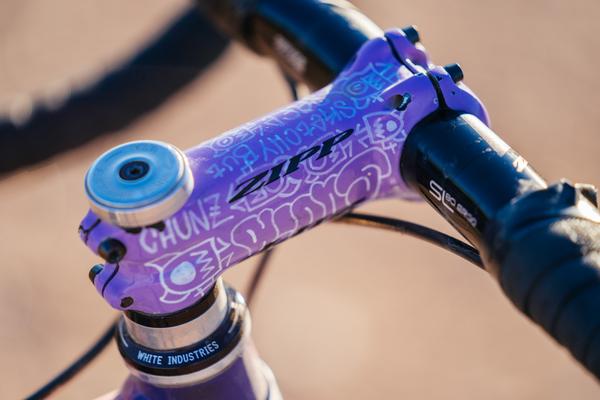 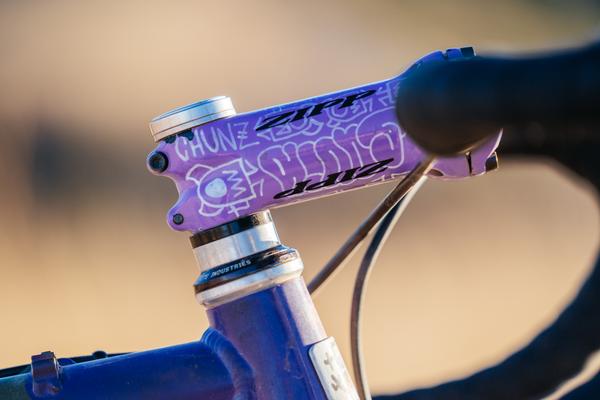 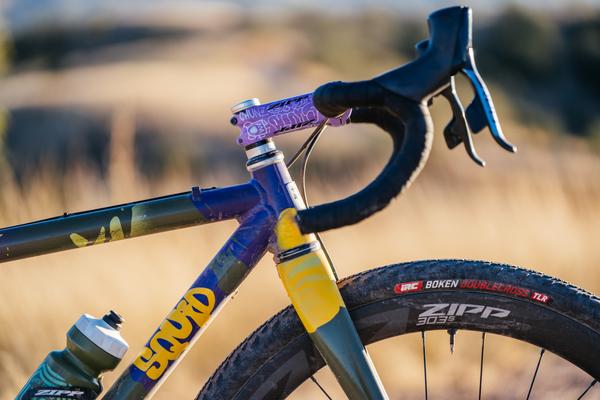 For the finer line work, Chris Namba, one of the founders of Squid, drew his characters on the stem with a paint pen, then added the Zipp logos and clear coated it.

For the kit, Emily built this bike with Zipp 303 rims, Sram Red AXS shifters, Force rear derailleur, and cranks. The beauty of ‘cross/gravel bikes lie in their simplicity. The 1x drivetrain allows for quick, responsive shifting under load, a common requirement for racing and riding singletrack. 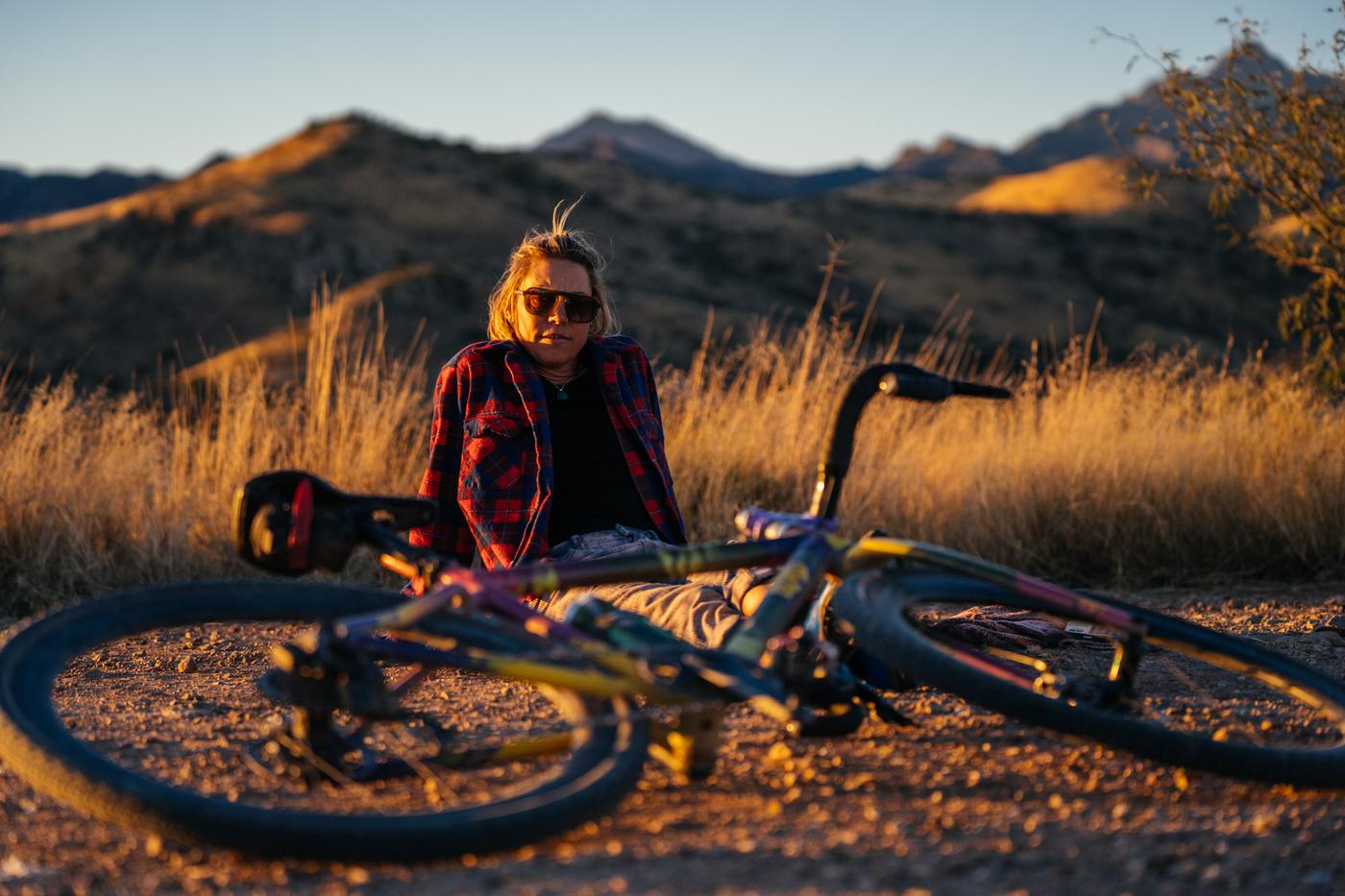 While Emily owns a Squid Gravtron, there’s something nostalgic about her V2 Squidcross from 2015. It’s a true-to-form example that your trusty ‘cross race bike is just at home on gravel roads and singletrack as it is on a taped-off race course.

What about you? What was your first “gravel bike?” Was it branded as such or was it a re-appropriated ‘cross bike? Let us know in the comments!