The road trip to Montana: Magruder Corridor in Idaho

“Come to Montana this summer, it doesn’t get too hot, there are no mosquitos, and the mountain biking is awesome!” At least one of those was true and luckily, that’s all that matters at the end of the day. This was Adam Sklar’s invite to a handful of frame builders and makers, welcoming us to ride bikes in Bozeman for a week in an event initially dubbed “Sklar Camp” but later was turned to “Builder’s Camp.” This idea stemmed from the disdain of trade shows and convention centers and a love of riding bikes, something many frame builders just don’t have a lot of free time for. It happens every year at NAHBS, usually Saturday evening after the show has closed and people get a few drinks in them. A lamentation of epic proportions take hold as someone blurps out “Why don’t we just skip NAHBS next year and ride bikes instead?” A few more drinks and a roundtable discussion ensues, resulting in “Ok, yeah we need to go to NAHBS, but let’s make plans to ride bikes this year!” Leave it to the young buck to take charge.

Adam Sklar is no longer the new kid on the block. At 25 years old, he’s still quite young, especially when you consider many of his peers have been building frames for longer than he’s been alive, but that doesn’t discredit what he’s capable of. For me, I found it amazing that Adam could invite a handful of builders out to ride bikes in Bozeman, Montana where his operation is located, who I might add are essentially all in competition for customers. It takes a dude like Adam to come at the situation with such green stokedness that it becomes infectious, convincing numerous builders from all over the US to attend. Oh and it’s bloody hot in the American West this time of year. Bozeman would be a nice change of temperature, pace, and environment. There were a lot of cats to herd this trip. As a photographer, it is very difficult to chase down and document the riders all equally. I didn’t want anyone to feel left out and that, believe it or not, is stressful. Sure, we’re out riding bikes, but I’m working from sun up to past sundown each and every day. Luckily, with a group like this, it was well worth it. From California, Squid Bikes owners Emily and Chris showed up. Curtis Inglis from Retrotec. Cameron from Falconer. Tony from Breadwinner in Portland. Carl from Strong Frames in Bozeman. Erik from Alliance in Idaho. Thomas from Horse Cycles in New York City, along with many other friendly faces. Adam provided an agenda and managed to keep it all together. We had give or take five days to ride and he packed in some exceptional trails with the help of Alter Cycles‘ – Mason and Steve. 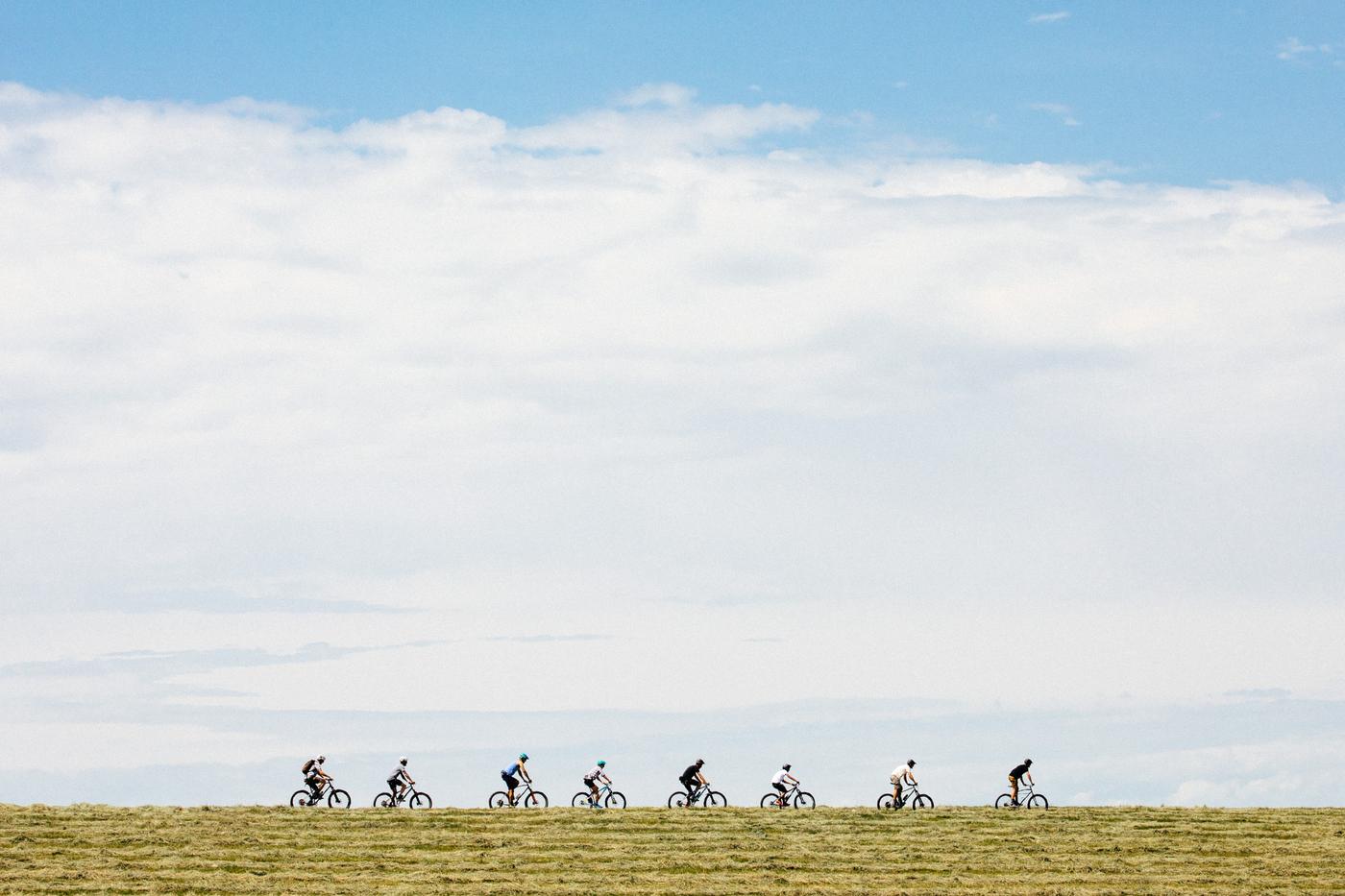 I’ve heard Montana described as “Big Sky” country and while I’d say most states have similar skies, there’s something about the vastness this place has compartmentalized in between mountain ranges that left an impression on me. A desert dweller by choice, and other reasons which are not relevant to this discussion, I will say that adjusting from shooting in vast openness to vast forest takes a bit of time. Riding also takes a similar adjustment period, with the switch from sandy rocks and loose corners to muddy rocks and slick roots. It wasn’t until our last day in Bozeman, on an innercity “townie trails” ride that the notion of Big Sky sunk in. For someone like myself, this was a special treat and one that only after culling images down into an appropriate serving has really settled my soul in a pleasant way. Watching that train of riders take off across a ridge in what was essentially private property made public by the hard work of trail stewards brought a great smile upon my face, only dwarfed by the big blue sky Mother Nature had prepared for us. Having never ridden in Bozeman before, I was anxious to take on some of the trails I’ve seen over the years from following Adam on Instagram. We took on a handful of local favorites including Grassy Mountain, Wheeler Gulch, and Blackmore, along with other innercity singletrack exploits. One day, the group took on Mystical Bear while I stayed at home to edit photos and work. After four straight days of hard rides, I was getting tired, and as I’ve learned in the past, those are the days where you hurt yourself. Again, just like in life, when it comes to riding, moderation is key.

With so much happening in a week’s time, we’ll pick up on the story in the captions within this Gallery. Enjoy!

I’d like to thank Adam Sklar, Alter Cycles, and Wild Crumb, the bakery across the street for fueling my mornings! If you’re in Bozeman, swing through the Sklar / Alter shop space, say hello and don’t hesitate to invite yourself on one of their awesome weekly shop rides!