Since no one is out riding the Tour Divide this year and I’m locked away in a lake house in Wisconsin, why don’t we take a trip down memory lane? Like, I found a backup of these images on my iPod kinda trip down memory lane, back to 2014 baby. This was my first proper “bikepacking” or off-road touring trip. I borrowed my dad’s 90s hybrid and put a Surly fork and some racks on it and hightailed it to Missoula after finishing my first few weeks working as a tour guide in Oregon. I met Kurt and Sam as they were working their way down the Tour Divide as the inaugural Blackburn Rangers, which I had applied for too, but didn’t get, so why not just crash their party anyway? These photos encompass about 3 weeks of me riding the Divide with them. They properly started up in Banff but I wasn’t able to join until Montana. I had to tuck tail and turn around near the Wind River range to get back for more guide work. Hitching hiking back was its own adventure for sure. Speaking of hitchhiking, its rad as fuck, we did it a ton on this trip. Why ride that 40-mile spur section to town? Just throw your thumb out and get a ride. Some of the most memorable moments from this trip were people we met from hitching. Most fortuitously, we hitch a ride out of Jackson Hole who happened to drive the boat across the lake we had planned to hike around to get to our climb for the day, so he gave us a ride right where we need to go and hooked us up with a ride across the lake! On that note, some dude we met on the trip and rode with for a few days later wrote a long diatribe after the trip on how we were “ruining bikepacking” by not carrying enough repair supplies and hitchhiking the lame road sections. Sorry for ruining bikepacking for all these years y’all, I hadn’t noticed with all the fun we were having. Oh yea, did I mention we were touring with a set of rock climbing gear? Yeah, cams, ropes, shoes, all that shit. Admittedly, it was a very thin rack, especially for getting three people up on a single rope. I wasn’t much of a climber then or now, very much earning my name as Haulbag Harding on this trip. Sam had picked out spots on or close to our route so we could climb about once a week, which I thought was a rad twist on just riding route. It was a helluva crash course in trad climbing and there are still things we did today that still make me shudder, it was the best of times. Dugout Boys? What does that mean? Well, turns out Sam and Kurt were damn geniuses and discovered early on that baseball dugouts make the perfect stealth camp and almost every town has one. If we knew we weren’t gonna make it out of town for the night we would scour google earth images for parks with a baseball diamond and voila! free campsite.

There were so many damned stories from this trip it is ridiculous, so for brevity’s sake I’ll try and dredge up a few good ones:

Our first day out of Missoula we were unsuccessful in hitching out of town back to the route. We met some other wayward humans at the gas station liquor store who offered to let us camp at their camp for the evening. Day one and we didn’t even make back to the route, hah! 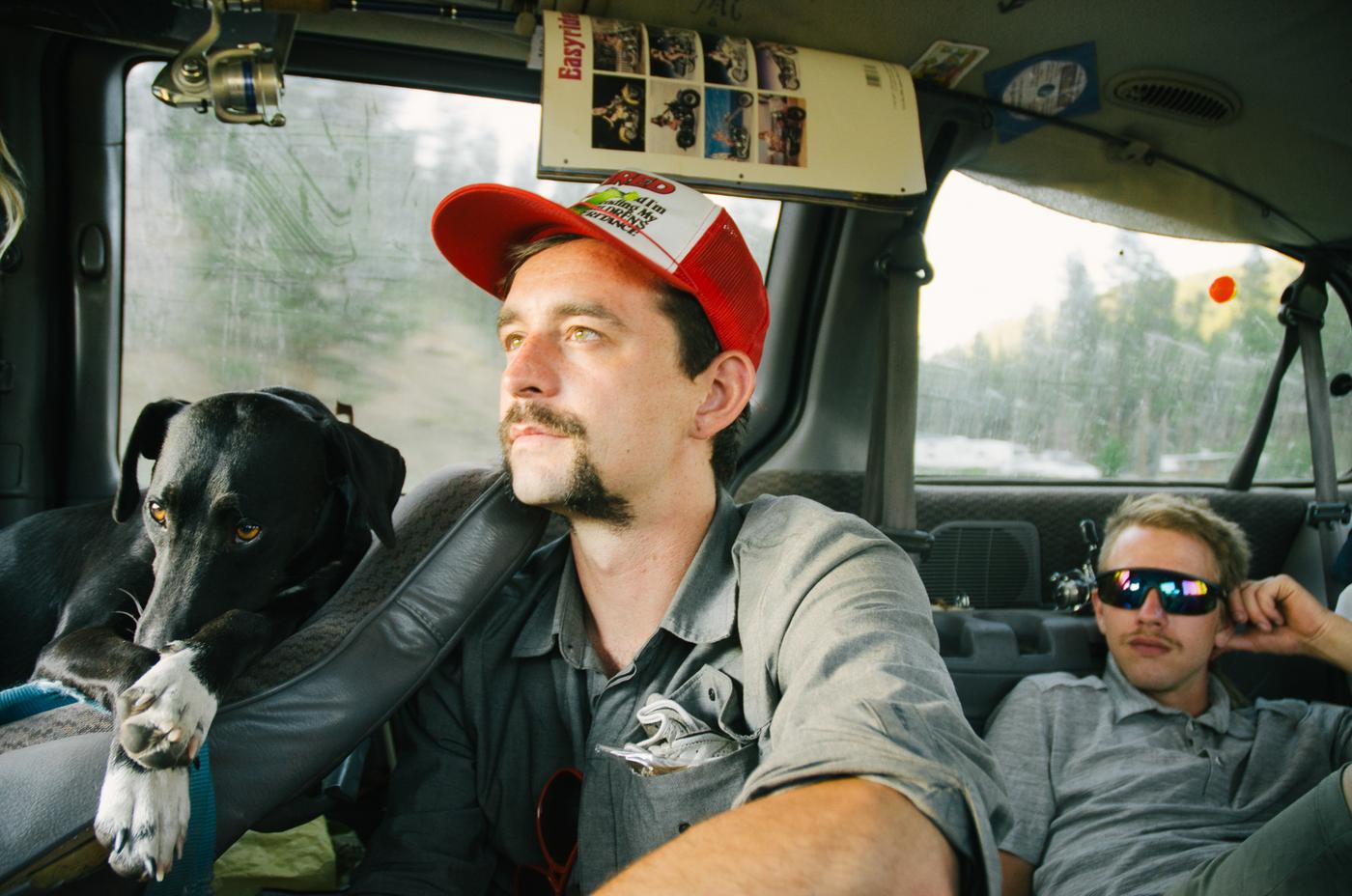 One day we ran into some north-bound riders who didn’t look like REI dads crushing miles with no time for idle chit chat. We pulled over and got to chatting and found out that they went to high school with a good friend of ours! They were riding old Bridgestones and Rivendells, they got sucked into the Grant Peterson cult real young. One of them had just spent 3 days off route getting a new wheel after it had cracked all the way around on the braking surface as it had become far too thin. We were all bummed to leave such good company and head opposite directions. When riding past the train bridge turned rails-to-trails bike path just outside of Butte, Montana we all looked up and thought, yeah we need to climb that. We got the gear out and were able to climb it like a sport route, using slings to girth hitch to the trusses of the bridge. This of course leads to some serious hamming it up, duh. Wise River, Montana, this is barely even a snack stop for most tour divide riders, but when your bottom bracket is squeaking bloody murder, you start to listen. Sam had ordered a new bottom bracket on amazon prime thinking, two-day shipping, we got this. Two-day shipping doesn’t work in Wise River we found out. We set up camp at the local schoolhouse which provided excellent recreation opportunities. We wound up holed up here for two days before we just gave up and let the bottom bracket keep toiling, I don’t even remember when we ever got that fixed. Jackson Hole was our hitchhiking dream destination. Upon looking at the 40-mile spur ride into town, we said fuck that and threw our thumbs out. There ain’t nothing like hitching in the land of river guides, we got picked up in about two minutes flat. The following morning, planning a big climb in the Grand Tetons we walked out to the highway and threw our thumbs out again. As mentioned before we got snagged by a ferry operator on Jenny Lake, which we had planned to hike around to get to the climb. Not only did he give us a ride directly to the ferry, but he also hooked us up with a ferry across the lake. We had the most spectacular day climbing, the approach was through an ice cave and the weather couldn’t have been more perfect. I wound up leading my first pitch, albeit a 5.4 traverse, it was still on lead dammit. When we hiked back down to the ferry our dude was driving the boat back! You can’t make this kind of luck up. There aren’t any photos of this story, so you’ll have to take it at my word. We were in line at the grocery store in Island Park, Idaho when the woman behind starts chatting us up about what we are doing. She invites us to come to stay at some lakeside lodge with her and all her friends, they make a yearly trip to the lodge to party for the weekend. We ask if there is laundry at the lodge, they have laundry, we’re in. On the way to the lodge, Kurt gets too rad on an embankment and totally burps his tire spilling his sealant, and since this is 2014 and we are idiots we cant fix it on our own. Throughout the evening Kurt manages to find someone with a bike on their car and convinces him to give him the 26” tube for his 29er to try and hobble it to a shop, it doesn’t work. So when we get there this girl that has invited us introduces us to her friends who are none too happy our smelly asses got dragged to the party. Whatever, we just want to do laundry anyway. We meet them later in the bar, I make friends with a small chihuahua since no one else wants to hang with us. After a while this party goes into bachelorette mode, the bartender’s shirt is off, one girl gives some other dude an awkward lap dance, all the while we are just thinking what the fuck are we doing here. To cap off the night, one of the girls not to be outdone but the one giving lap dances tried to go all Coyote Ugly and dance on the bar only to get damn near knocked out by a ceiling fan, time for bed. We wake up hung-over sprawled out in the woods across from the bar. We try to figure out how the hell we are going to fix Kurt’s tire, just then the girl who roped us into this whole ordeal rolls up. We explain our story and she lends us her truck to go to West Yellowstone and get some sealant, boom. We passed some other riders we had been leapfrogging with for a few days and told them we traded our bikes for the truck in town. One final story and I’ll wrap this whole roving shit-show up. When we were in Jackson Hole, I ran into my good friend’s Sister. It was some kinda coincidence, it was her only day in town all summer. She was working horse pack trains at NOLS ranch near the Wind River mountains, which just happened to be on route! We parted ways and said we would holler when we got close. When we rode past the Winds Sam had another climb picked out for us, decidedly the most ambitious so far, 8 pitches. We quickly found out that this route was much harder than advertised and there was a good chance we were the second group to ever attempt it. This meant lots of dirt and plants still on the route, shitty placements, and a general what the fuck are we doing kinda mode. I still have no idea how Sam was able to lead a few of those pitches, it was madness, I had to get hauled up most of it. Anyway, we reached the top and then had a huge walk-off that was in the dark since the climb took forever. We got split up and worried that Sam might have walked off a cliff without a headlamp in the dark, somehow we all ended up back at the base safe and sound. Textbook epic. The next morning we ran out of food, we scrapped the last bit of peanut butter off the bottom of my jar before the thirty-mile ride to the next town. Bonking like crazy we made it, I hailed my friend’s sister and she rolled into town with a big ass truck to haul us to a lake for beers and swimming, what could be better right? When we rolled into the NOLS ranch they were having a huge BBQ and some cowboy from Patagonia, like South America Patagonia, was roasting a goat on an open fire. We had as much food and whiskey as we could fill our bellies with, it was the best day ever. The next day I had to say goodbye to my ding-dong comrades and head back to Missoula and so this trip was over. This was the trip that started it all for me, the first long term documentation of one of my bike tours, my first off-road tour, and the most inspiring trip to this date that I have been on. After the trip was able to trade a few of the images to Blackburn for my very own set of actual bikepacking bags instead of bike co-op racks and a Walmart drybags. Nonetheless, I hold this trip up as the quintessential just ride whatever you have on tour and just have fun. Shut up and get rad y’all.