The first story worth noting is this bike is not actually Stephanie’s at all – it’s our friend Andy’s. When we were researching steel ‘cross bikes to tour on last year, Andy offered to lend us this one to try out. It had been stolen, didn’t come back very quickly, and he’d since replaced it. Stephanie rode it a bit last spring and then hung it up as we went traveling, moved back to Vancouver, and endured one heck of a winter. 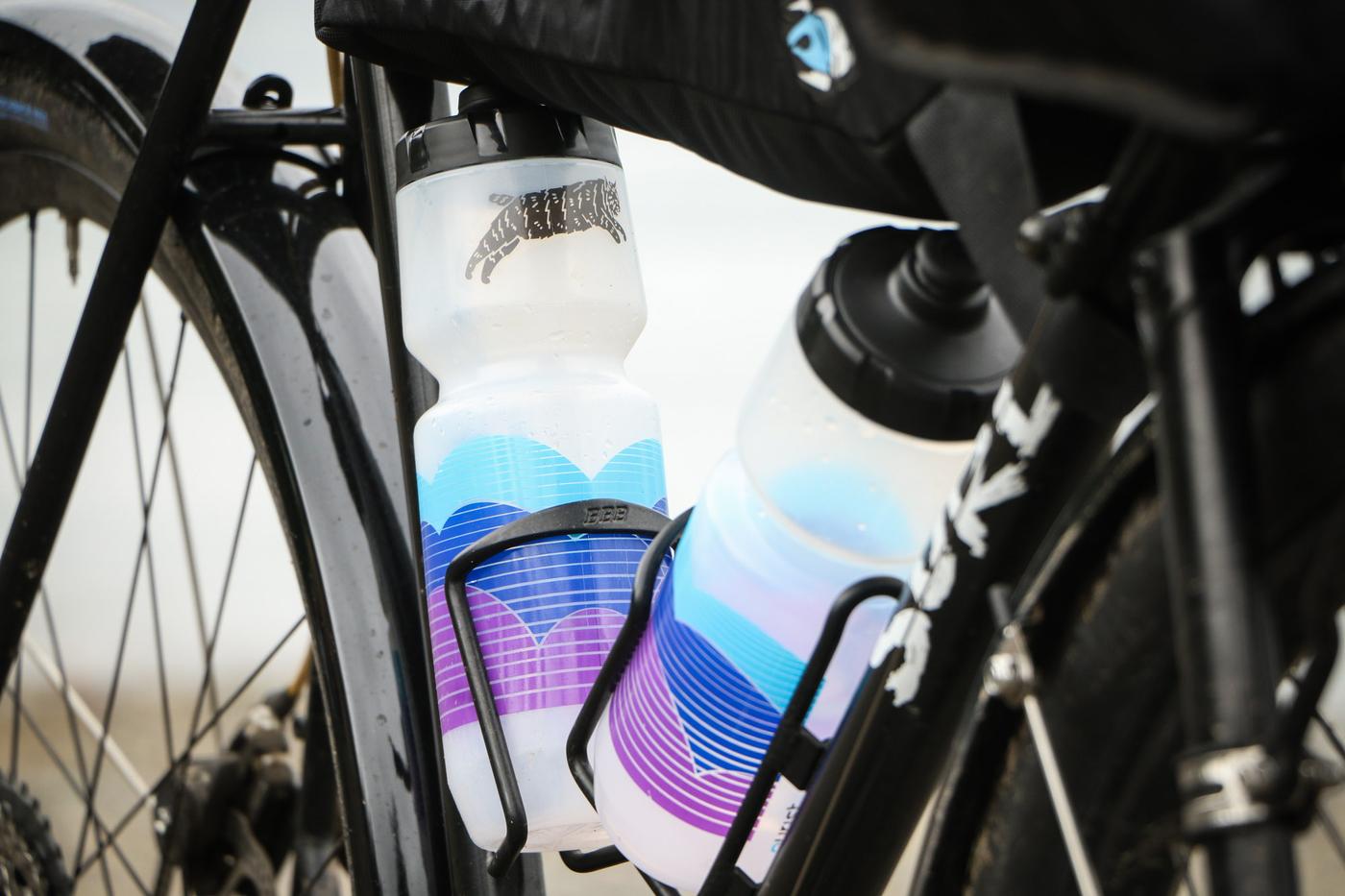 People have asked why Stephanie would need this bike at all when she’s got a 650B Wolverine on Horizons (more on that bike’s metamorphosis soon). The answer is simple: she wanted to join our local road club. Making her Wolverine fit that purpose would have meant swapping the Jones bars and Tubus rack with dynamo – things she really loves about that bike on an everyday basis.

Similar frames, different preparation, different end result. With its lighter build, shorter rear end, and higher bottom bracket, the 650B Straggler is quicker than her commute-focused and tour-ready Wolverine. The Wolverine as it’s set up isn’t exactly fast, and while the Straggler may not look it, it’s been surprising folks at the club ride. 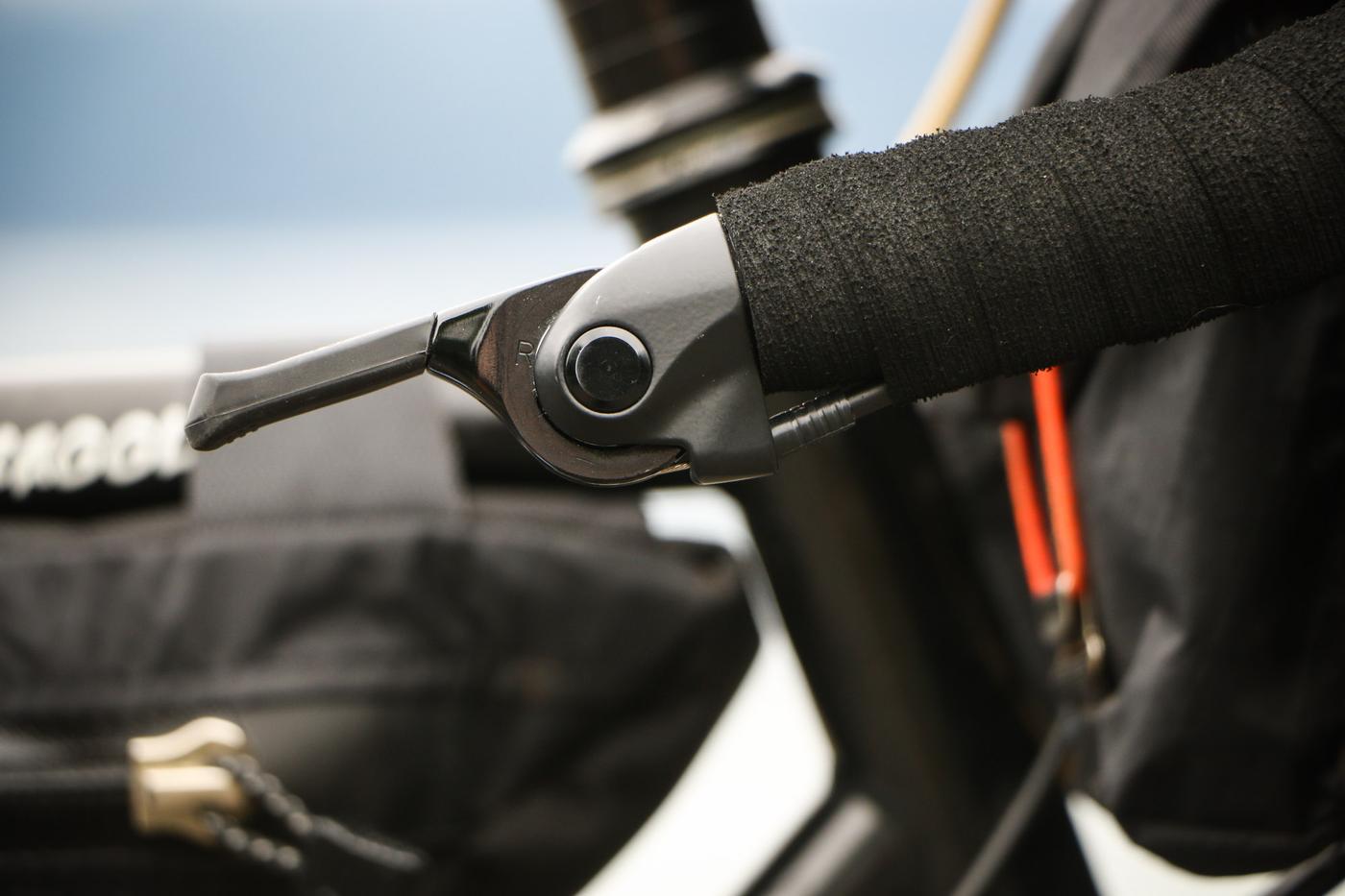 To revive a bike from a dormant state and prep it often takes some messing around, but this one was pretty sweet already. Its last incarnation under Andy was a single speed ‘cross ripper, so it had a 38T Race Face Narrow Wide ring, 650×41 Knards, Surly hubs to Stan’s rims, SRAM S500 levers, BB7s, and rad gold Jagwire compressionless housing.

I wanted to keep the brakes intact and give Stephanie a wide range of gears, spending as little money as possible making it happen. I had recently bought a XT 11-42 cassette and chain for the 27.5+ wheels on my mountain bike and, having run the Gevenalle GX shifters while touring last year, knew Microshift made Dyna-Sys compatible bar end shifters for both 10 and 11-speed.

Next up was wheels. With mountain bikes moving to wider rims and 148mm rear spacing, there are lots of “obsolete” but excellent and tubeless-ready wheelsets out there. We had a pair of Easton wheels hanging around (only one of which was on at this point while I sourced end caps) and this was just the project for them. I had the shop bring in a SLX M7000 derailleur and the shifters, and the bike was rolling. 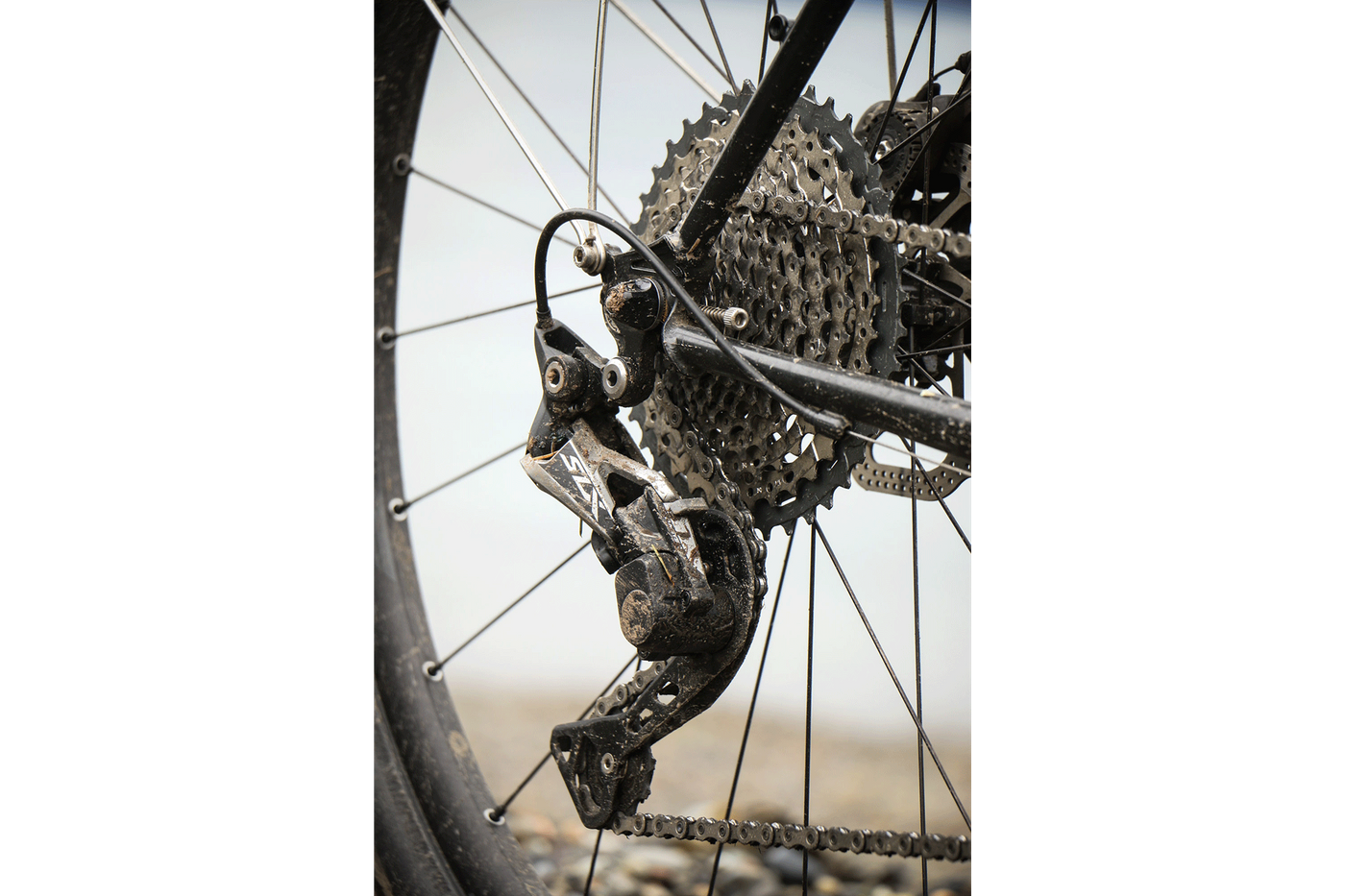 After a couple of shakedown rides, it was clear this bike was a hit. Never thinking she’d ride a bike with a bar end shifter by choice, it was cool to see her become comfortable with it quickly. The next step was fenders, a PNW staple for all-weather comfort and club ride courtesy. These are the Cascadia 26″ ATB fenders, 60mm wide, and they are perfect on the fat 650s. Slammed like they should be.

The Knards aren’t all that quick, and we figured we could stuff some more volume into the frame. Thing is, she was so stoked on the all-blackness that they had to be black. We ordered up some 48mm Switchback Hills from Compass to live that supple life and while they’re tight – maybe too tight for your liking – they’re super quick. And dreamy. We added a black Spurcycle bell and it was good to go. To me the proof that Stephanie’s really enjoying this bike is the fact that she chose to take it on the Super Stoke Weekend ride in the San Juans with the Austin crew. We fitted some extra pieces to the bike to turn it into a weekend camper, and a quicker traveling bike was born!

I put the Rawland rando rack on the bike and my Swift Ozette rando bag with the Ortlieb decaleur hack – but the other end of the decaleur wouldn’t fit with Stephanie’s lower bar height. Instead, I clipped the Tubus rack stay into the pannier clips first and used some mega zip ties to cinch the whole system together. It worked out great, and still turned out to be easily removable.

The frame bag is one Stephanie had made by Porcelain Rocket for my mountain bike, but it had been living on her Wolverine until Super Stoke Weekend. It doesn’t fit perfect here but that’s cool. You’ll recognize the seat pack and unabashed dangle from her Wolverine as well. 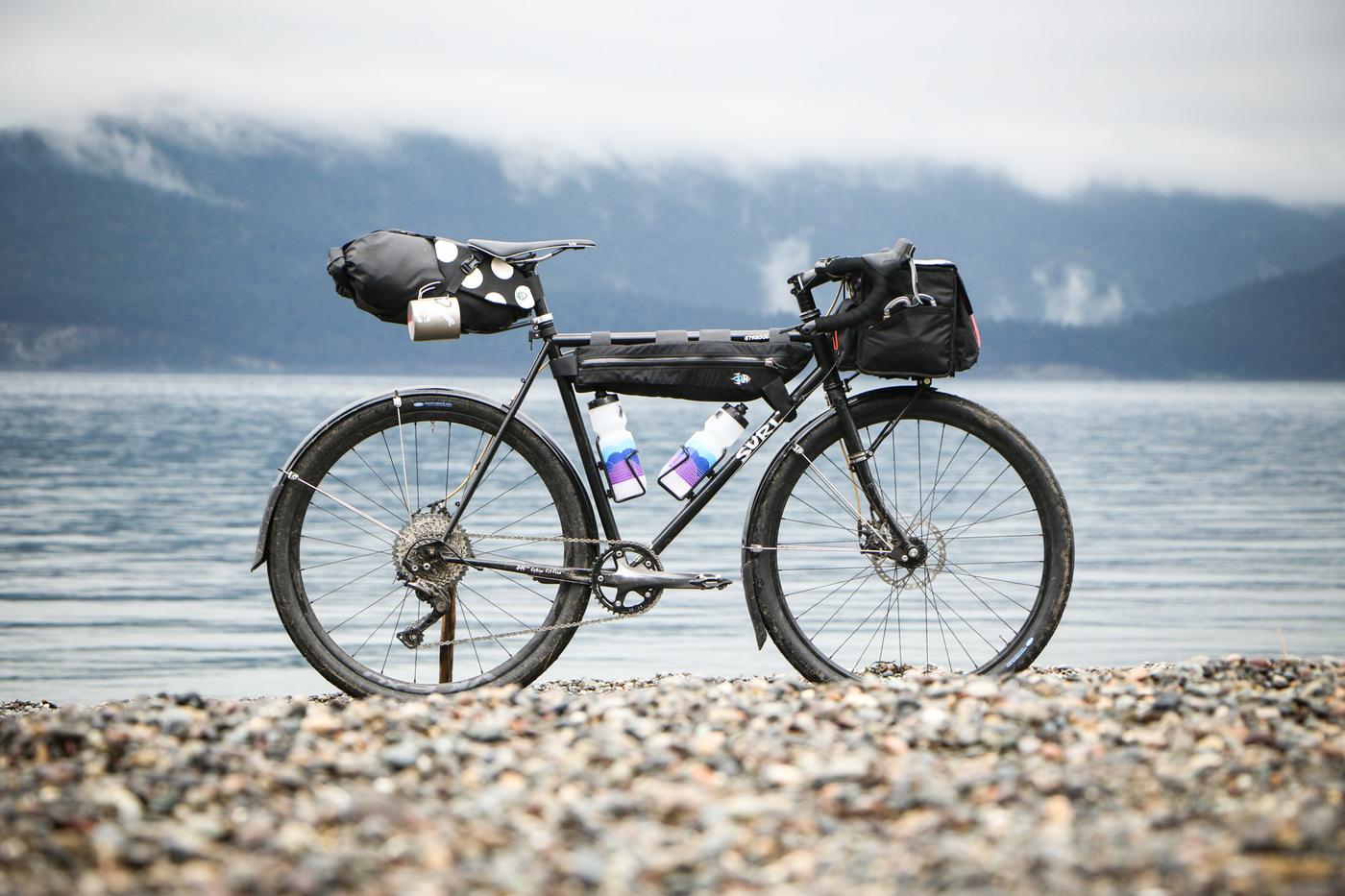 Into the Liquid Sunset

So while the way it’s set up in this gallery may indicate otherwise, the Straggler came together not to replace the Wolverine in any way – but to be a quicker bike for Wednesday nights, Sunday mornings, and for adventures like the one we were on when I shot this set of photos.

There are still lots of things that could change, and probably will. Lots of things you might be asking “why?” about – why are there p-clips on the fork, why do you slam your fenders like that, why doesn’t Stephanie ride a carbon bike like everyone else at the club ride – and the answers are probably simpler than you think.

Stephanie describes it as her sandbagging machine, quietly impressive, stable yet fun, and just what she needed to put in the time to become comfortable on drop bars. Hundreds of miles later, she’s the driest person at the wettest club rides, and super stoked on her blacked out road bike. 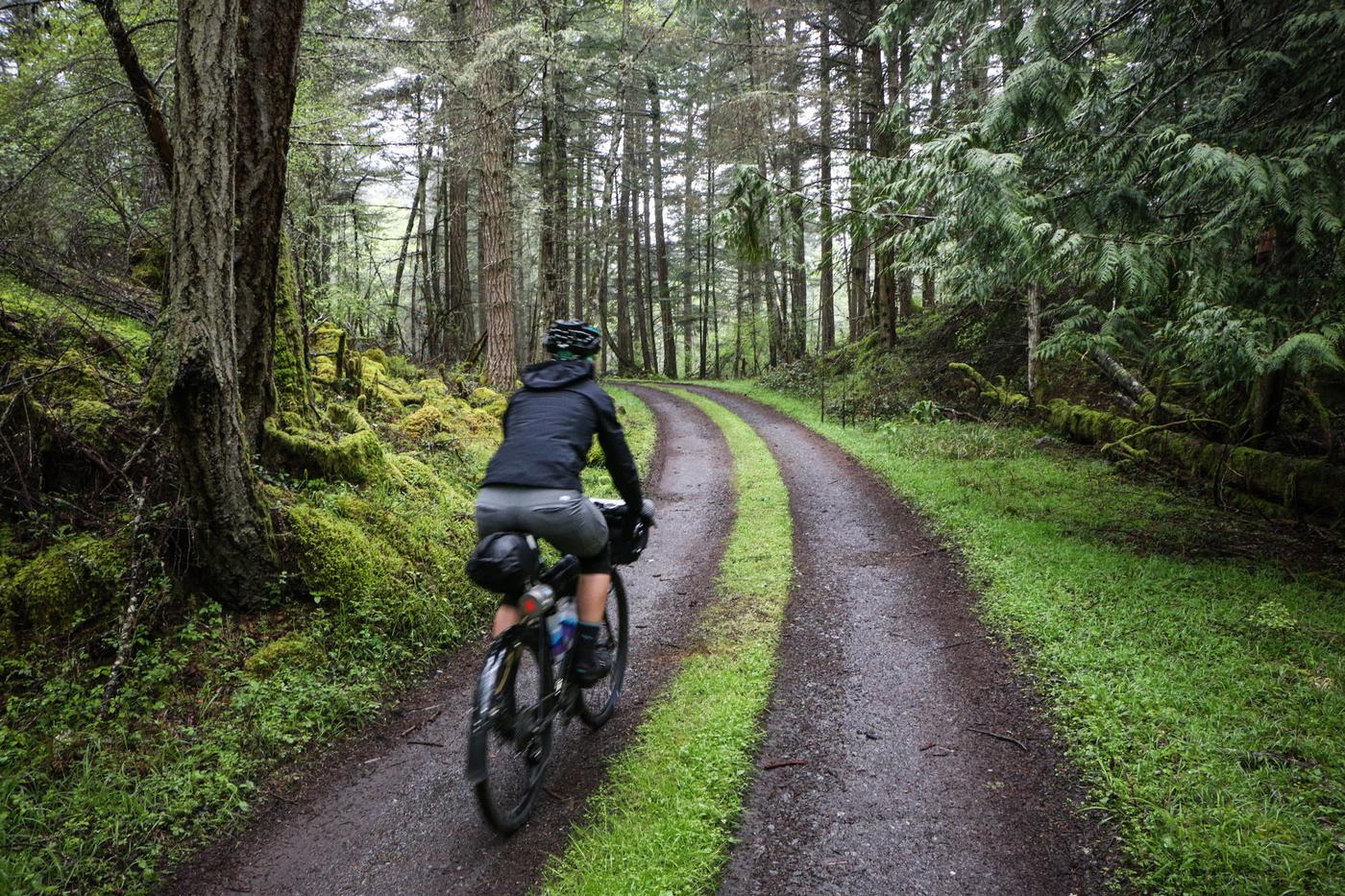 Follow Morgan and Stephanie on Instagram at Found in the Mountains, and if you find yourself in Vancouver, join them for #CoffeeOutsideYVR every Friday!