In the time we spent in Los Angeles, Carter’s Straggler was one of the bikes in for service at GSC. Now, as a bit of a background, the Glitter Dreams paint on the first year Straggler was actually part of the inspiration for the builds that ended up becoming our Wolverines. So when I first saw Carter’s bike leaning against the wall waiting for its turn in the service queue, with its pink King hubs and purple valve stems, it had already caught my eye.

Then, the work began. One day, the Straggler was hanging out with the new Sim Works Homage 43c tires in that throwback green. Whoa! I immediately deemed it a clown bike – not in a bad way, but in the way that there was no way this thing would come together in a subdued and complementary fashion. It was going to stand out, that was for sure. 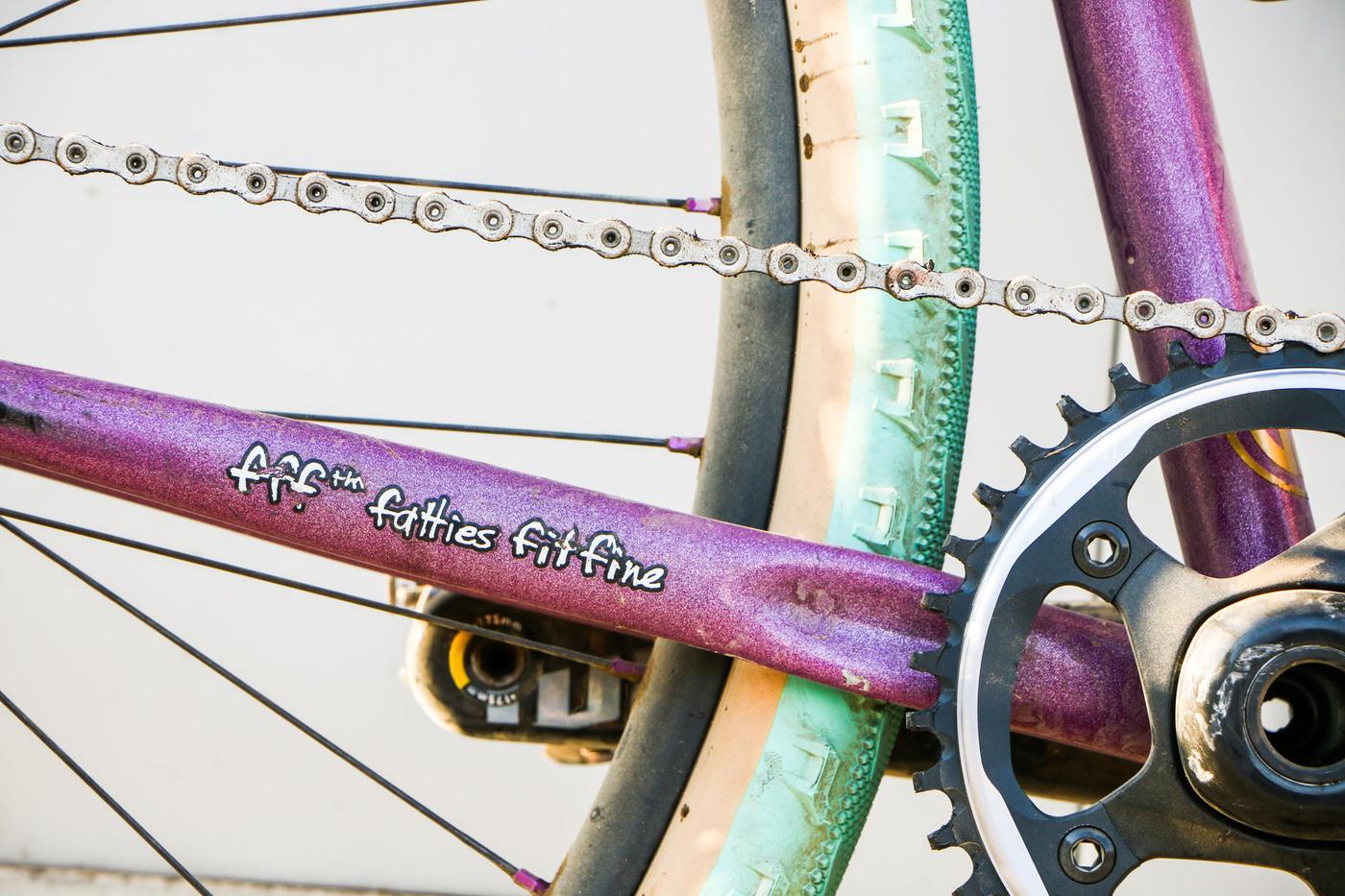 We met Carter when he came in to pick up his finished bike, and I was glad to find out that he wasn’t offended by my clown bike classification. He was super down with simply having fun and joking around about it, and the way it worked out, you could throw almost anything colorful at this bike and it would work.

Since we’d hit it off immediately, Carter suggested that we go for a ride the next day, and that he’d invite Nils. So, the Straggler’s inaugural ride in this iteration was a rad tour of Los Angeles’ hidden dirt with ice cream and tacos and beers at the shop afterward. Carter was living in Memphis when he originally built his Straggler, using it for both exploring and racing in the south – including racing SSCXWC ’14 in Louisville. Before moving to Los Angeles, he figured that having some gears would be helpful for the bigger climbs, and the Straggler’s west coast metamorphosis began.

Since his original wheelset used a single speed King hub, he sourced a matching pink King hub – but it happened to be a 36 hole, and Blunt SL rims in 36 hole were long discontinued. He reluctantly built his geared wheel around a Blunt SS, and made the move to the west coast. After a few months of living in Los Angeles, and a few too many close calls ripping the steeps, Carter decided it was time for another upgrade – this time, in the stopping department. In the meantime, he’d been busy tracking down a rim. Scouring the internet, he responded to a four-year-old post by Peter Bundy Frameworks in Australia, and it turned out they still had a rim.

Along with the rear wheel rebuild and hydraulic brake upgrade, he had the guys at Golden Saddle install the Sim Works Homage tires and Misirlou bar and topped that off with pink Manual for Speed bar tape. So, while it may look like Carter’s Straggler is a mess of unmatched parts thrown together, it’s actually the continuation of a long story and more care for the details than it may at first seem – and that’s just the kind of story we like!