Midlife crises come in all shapes and sizes. For some, a bright red Mustang relieves the itch. For others, some Eat Pray Lovin’ on a beach in Bali is just the ticket. But for Joe McEwan, Founder of Starling Cycles, chucking in his job as a successful aerospace engineer to build steel mountain bikes in a garden shed was just what the doctor ordered.

In this shop visit, we dig into the brand’s origin story, go behind the scenes at their Bristol workshop and learn why their signature single-pivots and retro rear shocks prove that simplicity never goes out of fashion. 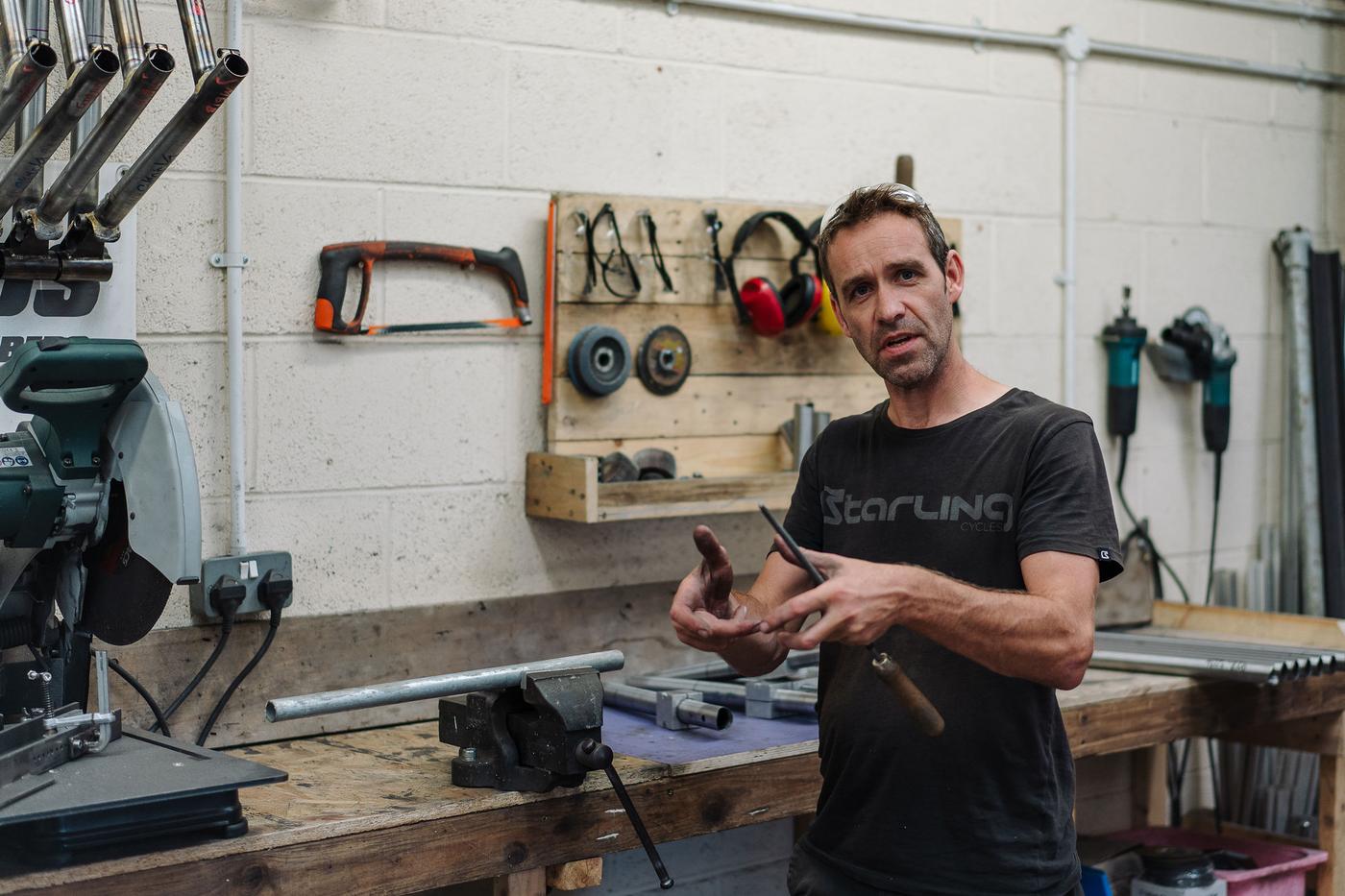 From Space to Steel: An Origin Story

Growing up, Starling Cycles founder Joe McEwan was always fascinated by building, modifying and tinkering. Perhaps it was the time spent watching his mum measure, mark, and manipulate simple lengths of fabric into dresses from their dining room table. Or perhaps it was the hours spent walking around the John Lewis haberdashery store sifting through a treasure-trove of different colored threads. 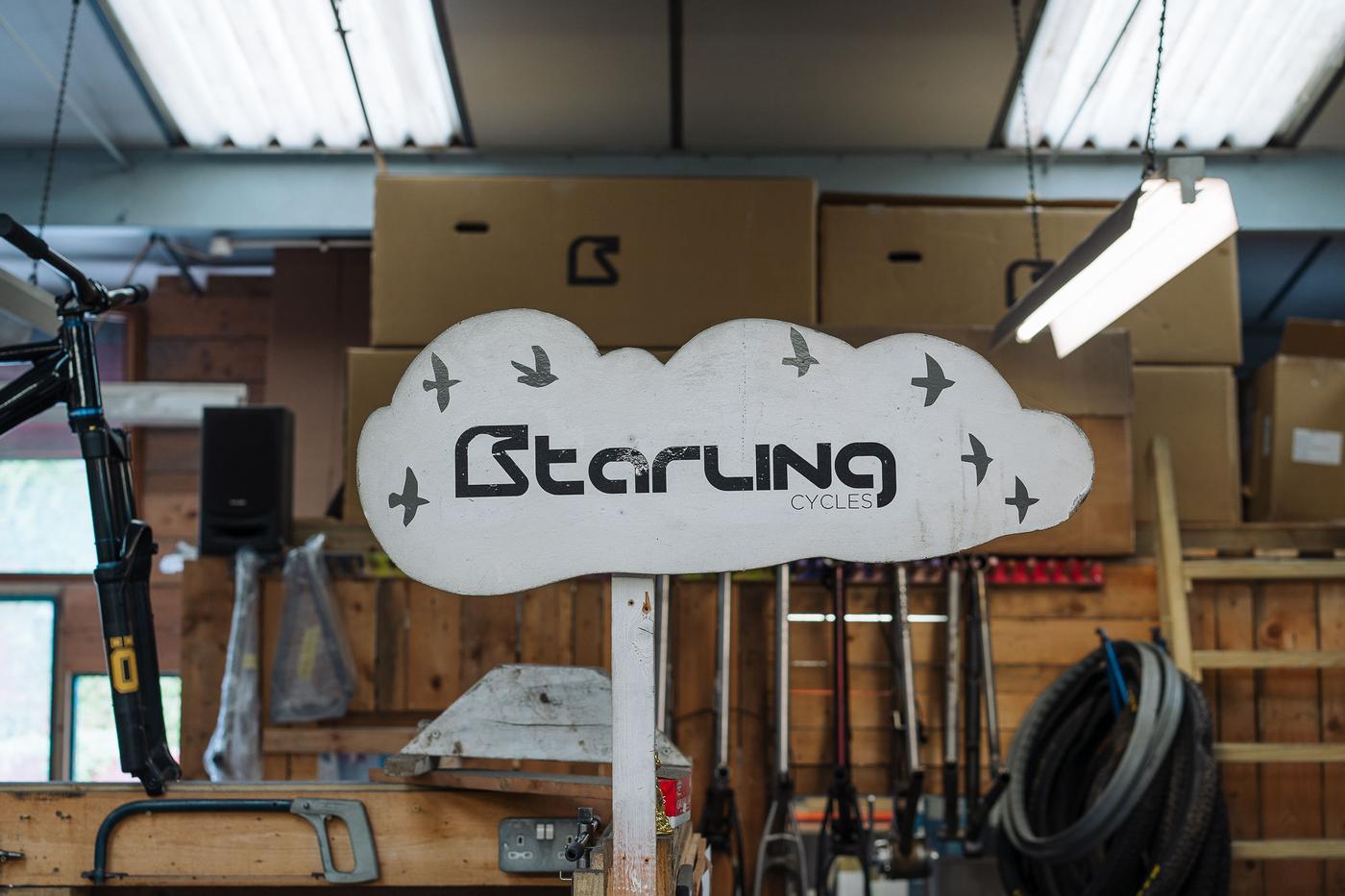 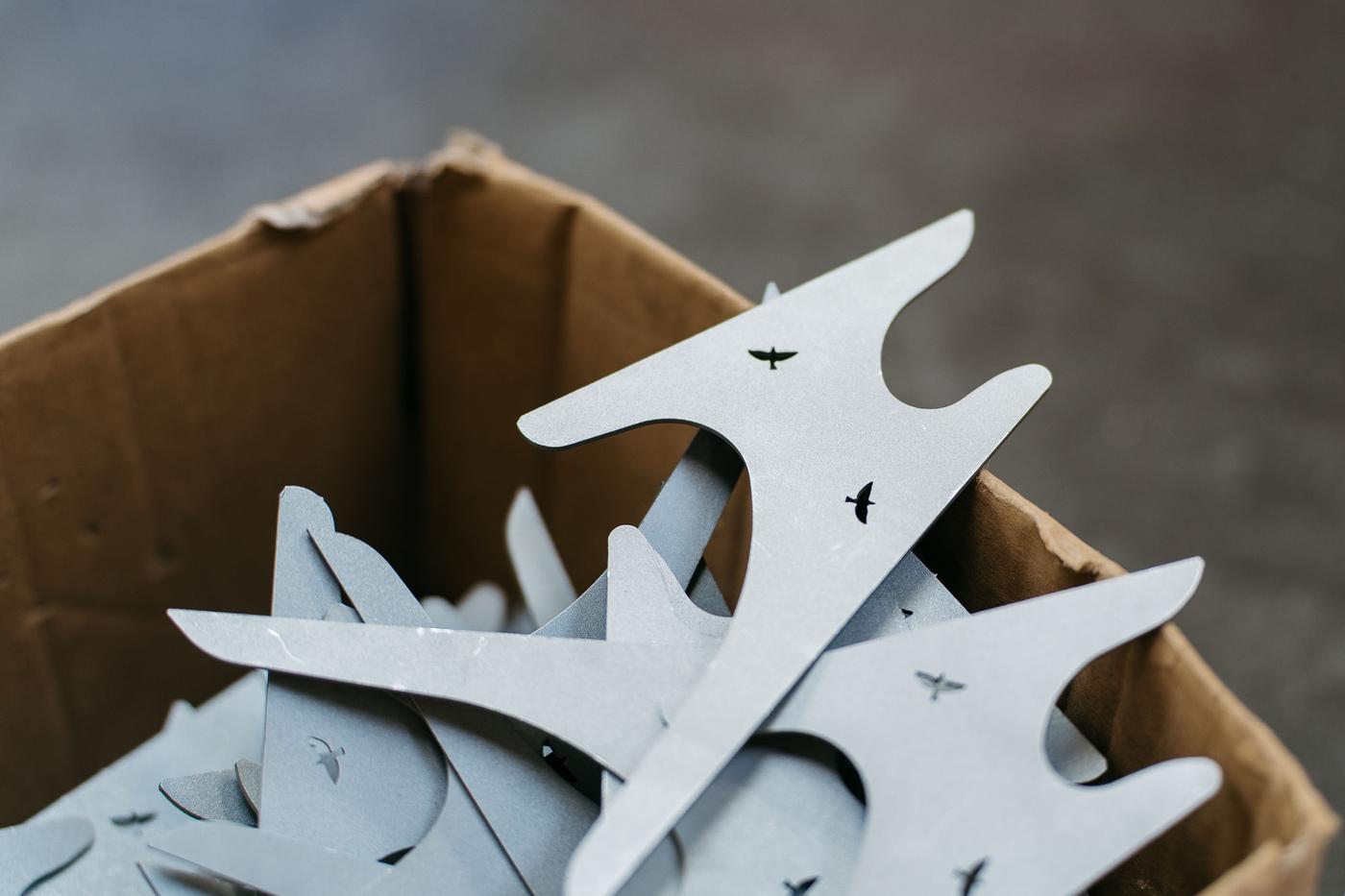 “I’ve always made stuff – it’s second nature to me,” Joe tells me as he leans over the workbench to grab a file. “As a kid, I played with technical Lego, made balsa wood aeroplanes, tricked out radio control cars and even made my own golf clubs.” So when he graduated as a Mechanical Engineer from Bristol University, his path toward Aerospace Engineering felt like a natural progression.

Specializing as a stress engineer, Joe worked extensively on the research, development, and analysis of carbon fibre wings for Airbus aircraft for 20 years. He enjoyed a lot of success, working with some of the world’s most advanced carbon fibre techniques, and soon began leading teams on multi-million dollar projects. The years ticked by and life was good. Half-day Fridays gave him plenty of time to shred his local trails and even allowed him to compete in a few enduro races of his own. 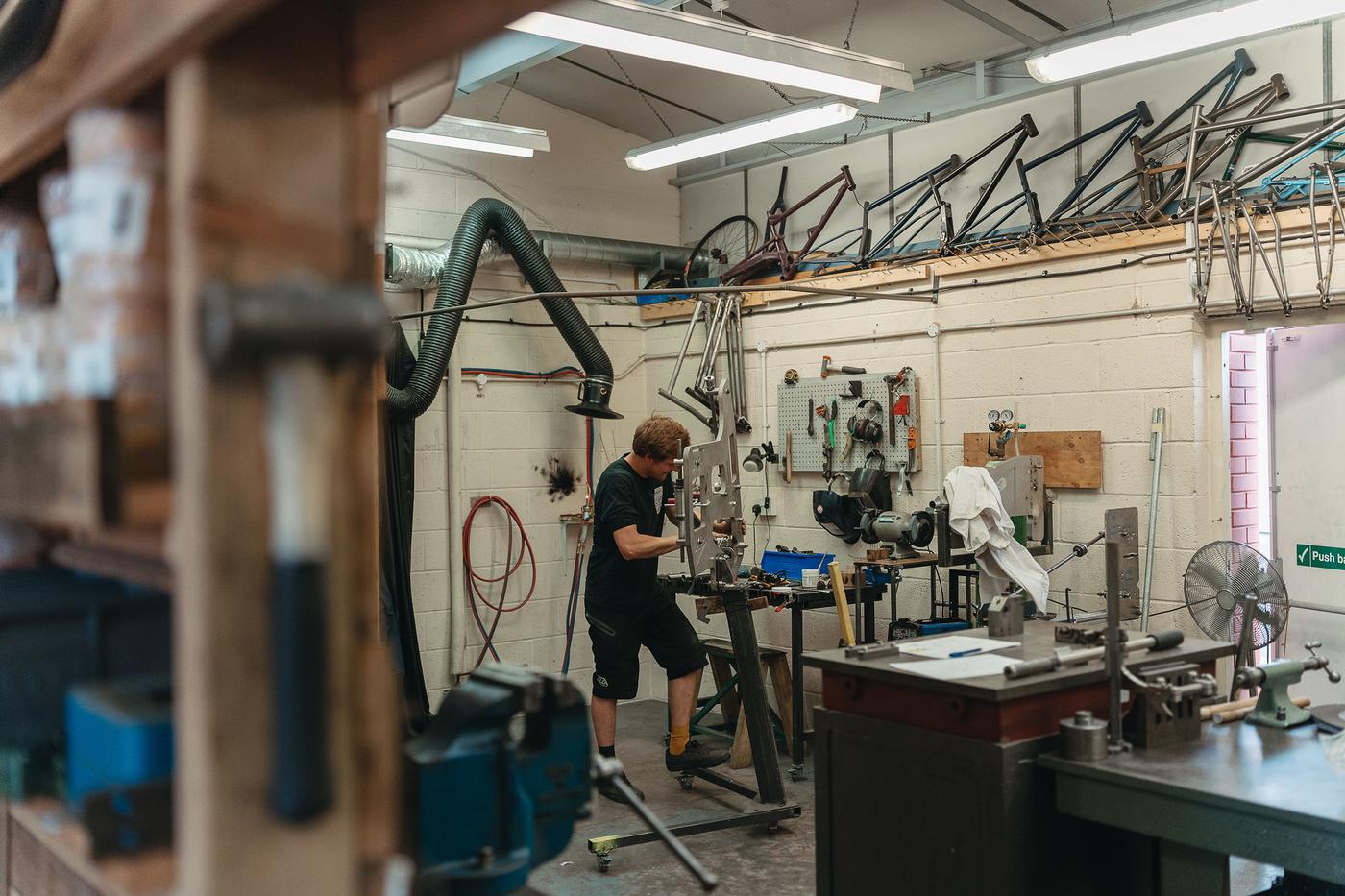 Then in 2014, Joe enrolled in a framebuilding course with celebrated steel builder, Dave Yates. A few weeks later, he’d produced his first steel hardtail. But this earliest iteration with its retro geometry (a 71° head angle and a 73° seat angle) was a pretty far cry from the kind of low, long, slack ideas that would soon underpin the Starling brand. Undeterred, he ordered some tools, fashioned himself a homemade jig and set to work modifying the hardtail.

Perched at the bottom of his backyard in a humble garden shed, new ideas came thick and fast. Evenings and weekends disappeared in a blur as fillet brazing, mitering and steely alchemy coursed through Joe’s veins. The framebuilding drug had taken hold and within a few short months, he’d progressed through several prototypes and produced the very first core Starling bike: a 27.5” full-sus dubbed the Swoop. Not long after, its big wheeled, big brother the Murmur 29er was born and Joe was ready to showcase his creations to the world. 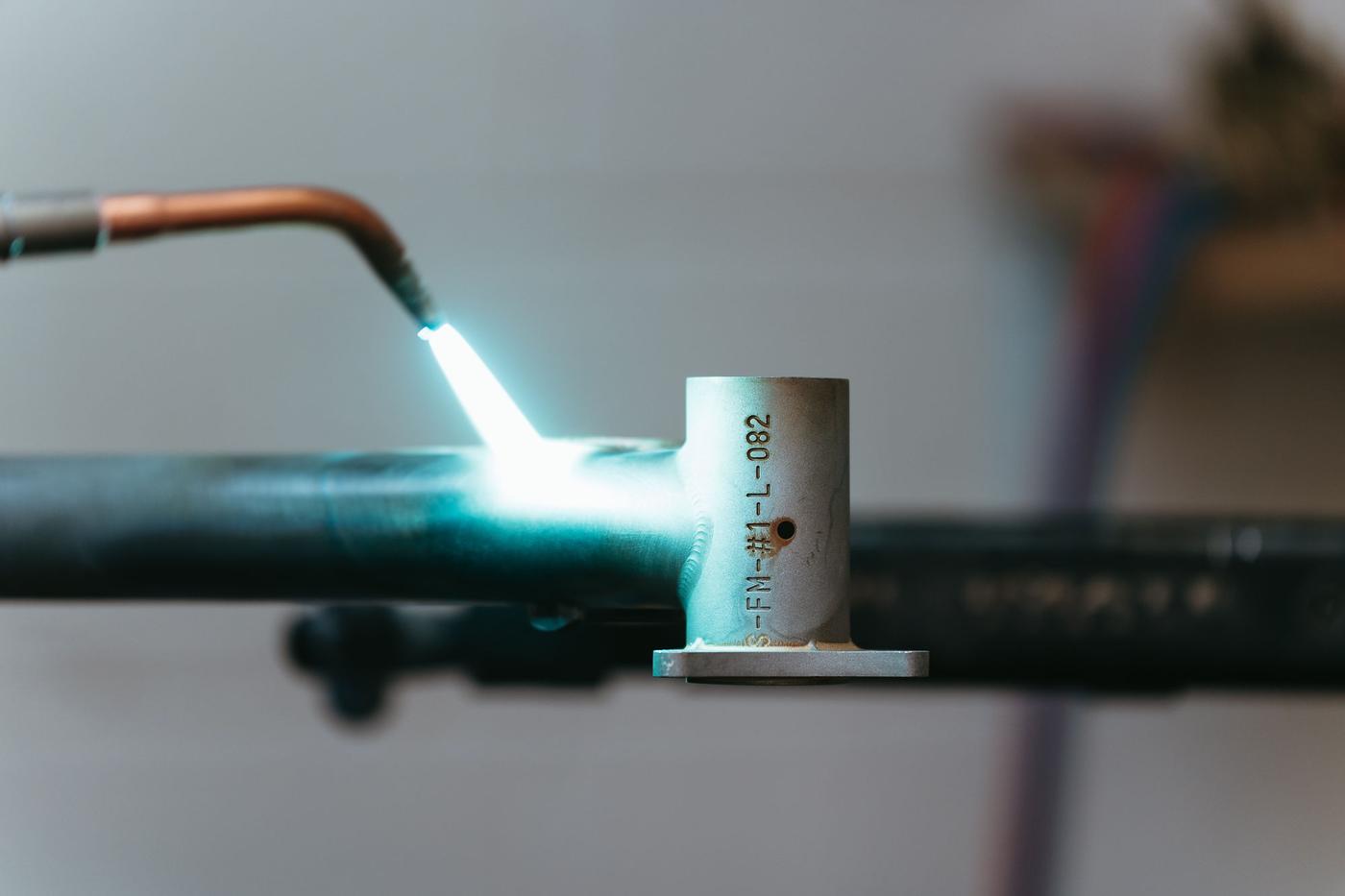 Enamored with the Murmur, Joe reached out to Steve Jones from DIRT magazine to see if he’d like to take it for a spin. As a National Downhill Champion and (the then) Editor of DIRT, ‘Jonesy’ is a notoriously honest reviewer and rigorous bike tester. So when he posted a gushing write up for the Murmur, and later crowned it the fastest bike in DIRT’s enduro bike group test of 2016, the Starling brand took flight and swooped onto the global mountain biking scene. 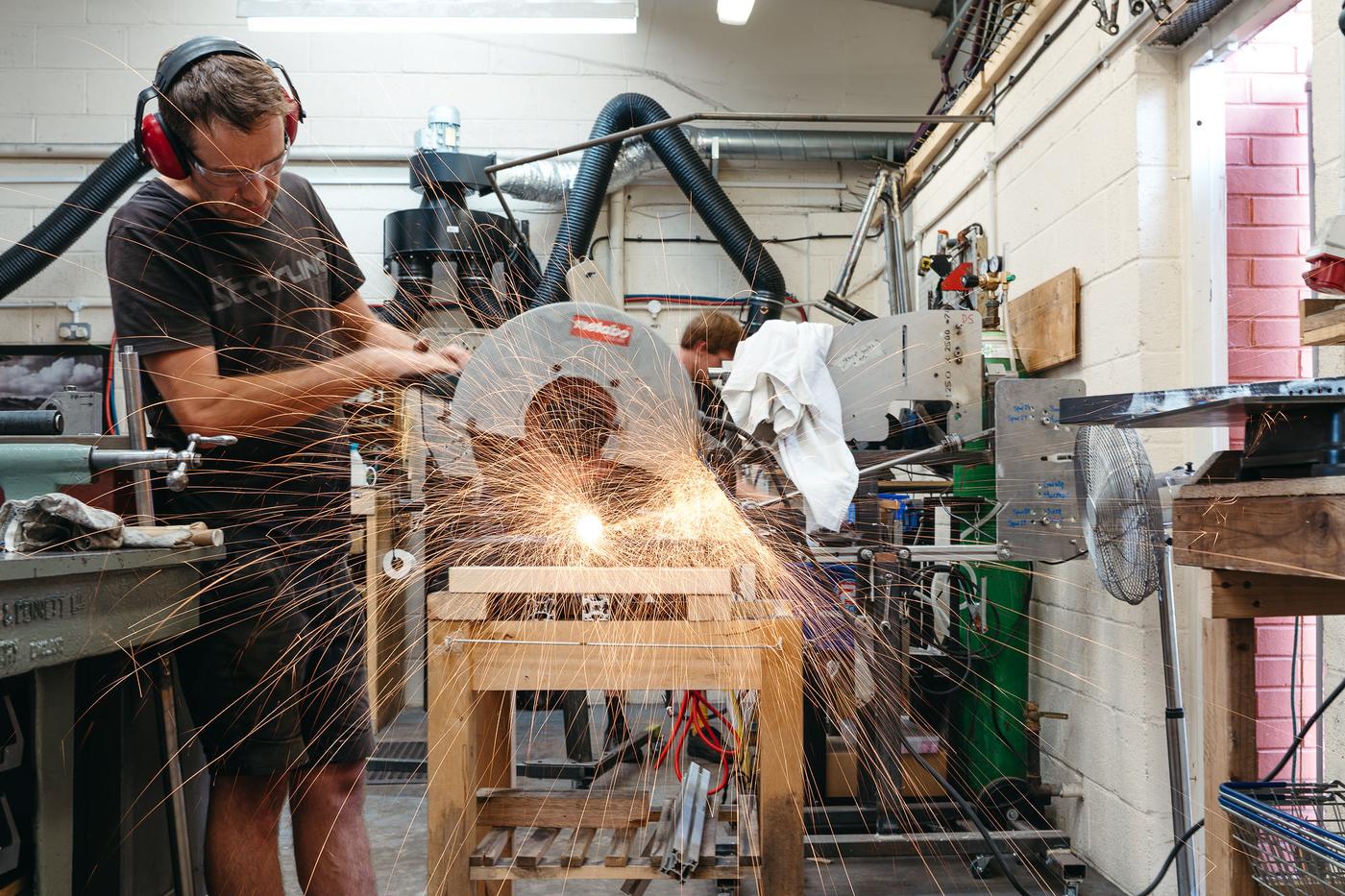 Joe has since left the world of aerospace engineering, outgrown his end-of-the-garden manufacturing space and upgraded into a spacious workshop in central Bristol, UK. He now employs a Manufacturing Manager (Geoff) and Framebuilder (Ollie), an in-house bike mechanic (James), and a budding apprentice (Will) who, when trained up, will carry the baton to be the next generation. Between the team, Starling builds upwards of 200 frames a year and have built a global customer base across Europe, USA, Canada & Asia. Not bad for a midlife crisis, hey? 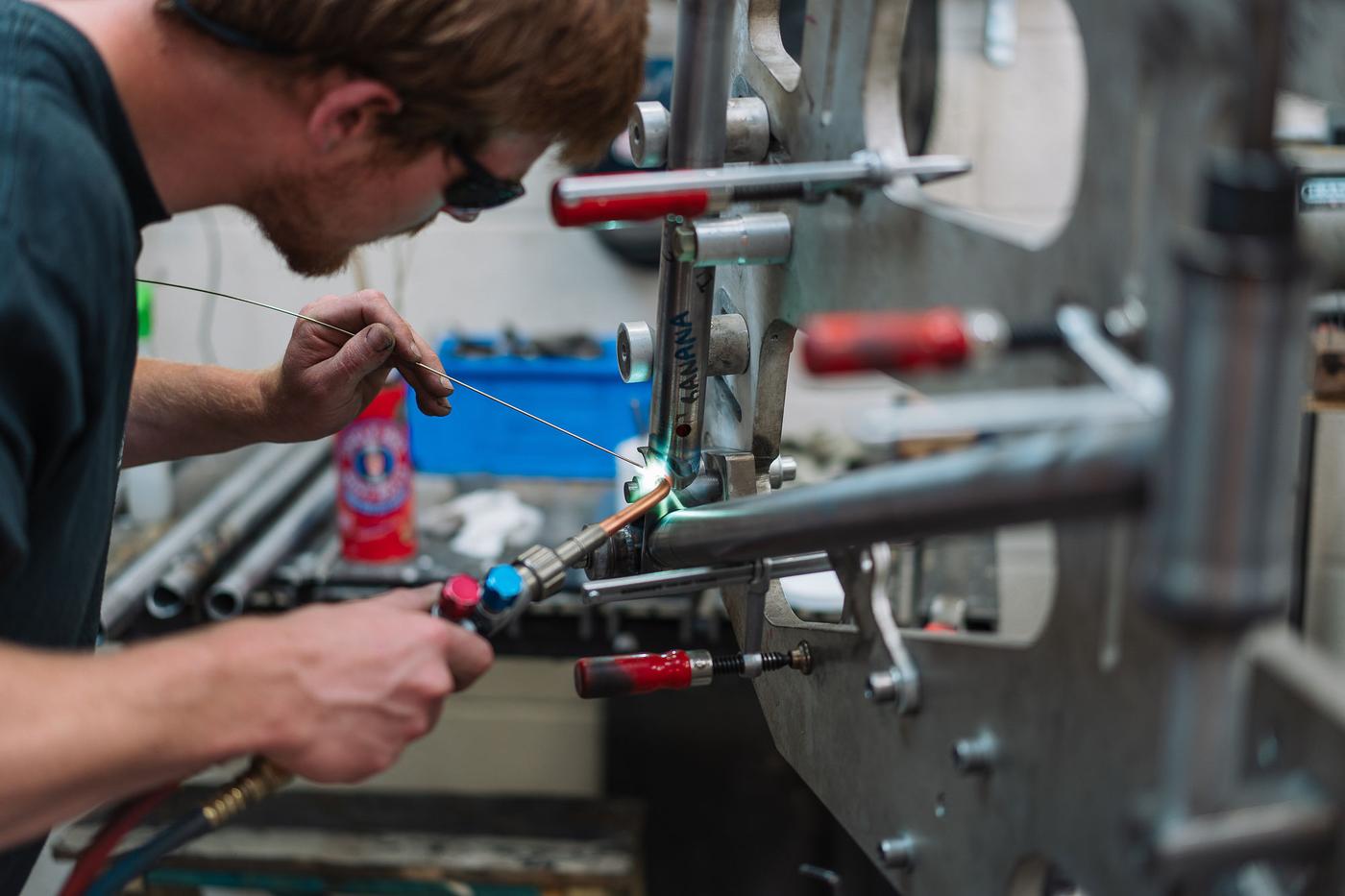 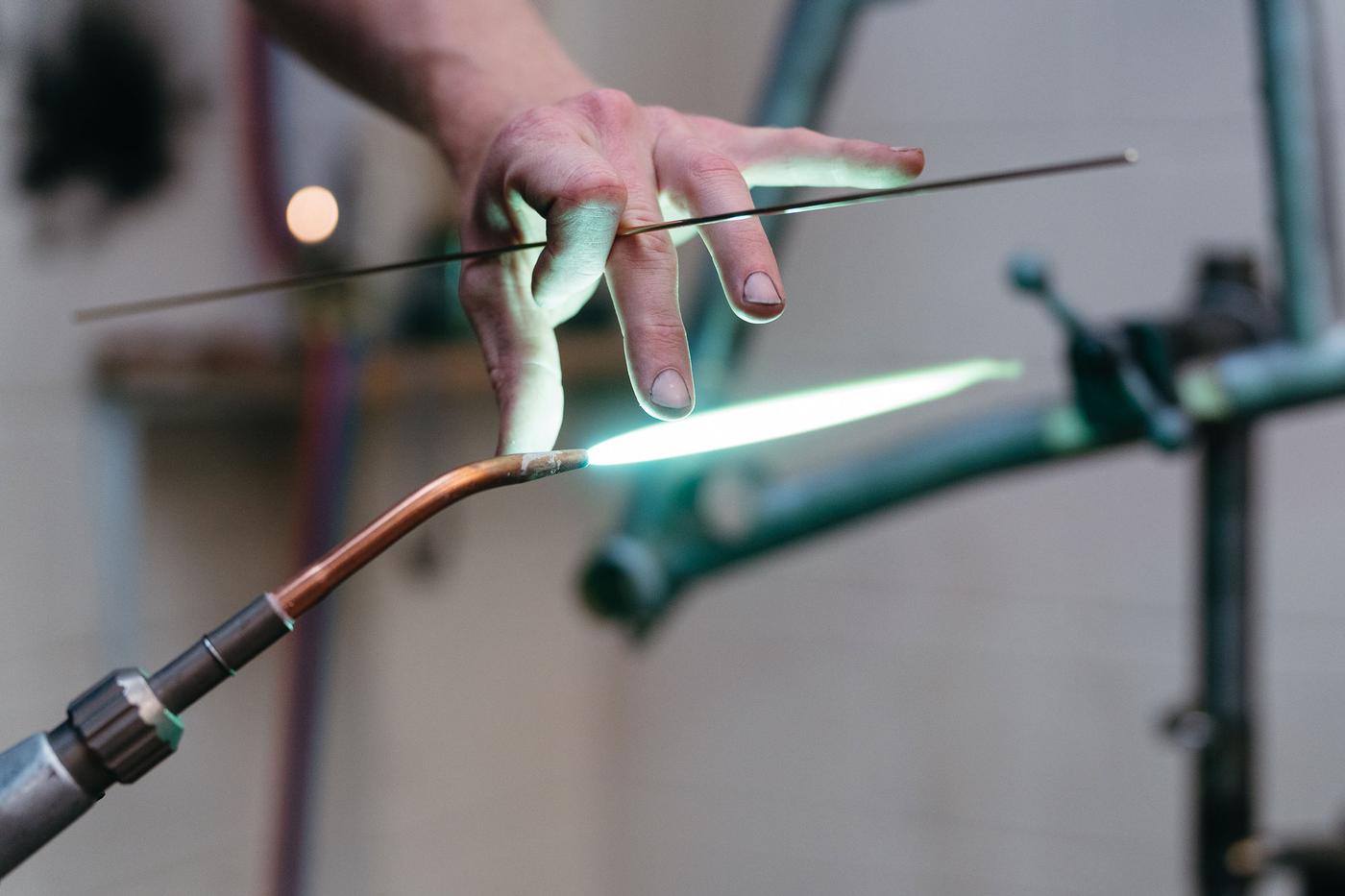 When Starling first launched back in 2016, the MTB market was awash with complex multi-linkages, billion acronym suspension designs and endless marketing jargon. Like many others, Joe became frustrated with these convoluted designs and sought a simpler approach. “My goal with Starling was always to build bikes that were the antithesis of marketing-driven design,” he explains, “Not led by industry trends or fads, but led by the notion that the easier a bike is to understand, the more confidence-inspiring it is to ride.”

So in his quest for simplicity, Joe chose a single-pivot suspension design, paired with a steel swing arm for bomb-proof performance, low-maintenance and unrivaled grip. He also chose to prioritize a linear leverage ratio and anti-squat/anti-rise characteristics as close to 100% as possible. These decisions firmly broke the progressive zeitgeist of the day, but resulted in a bike that felt “neutral, stable, and simple to understand,” Joe explains, signature mug of tea in-hand. 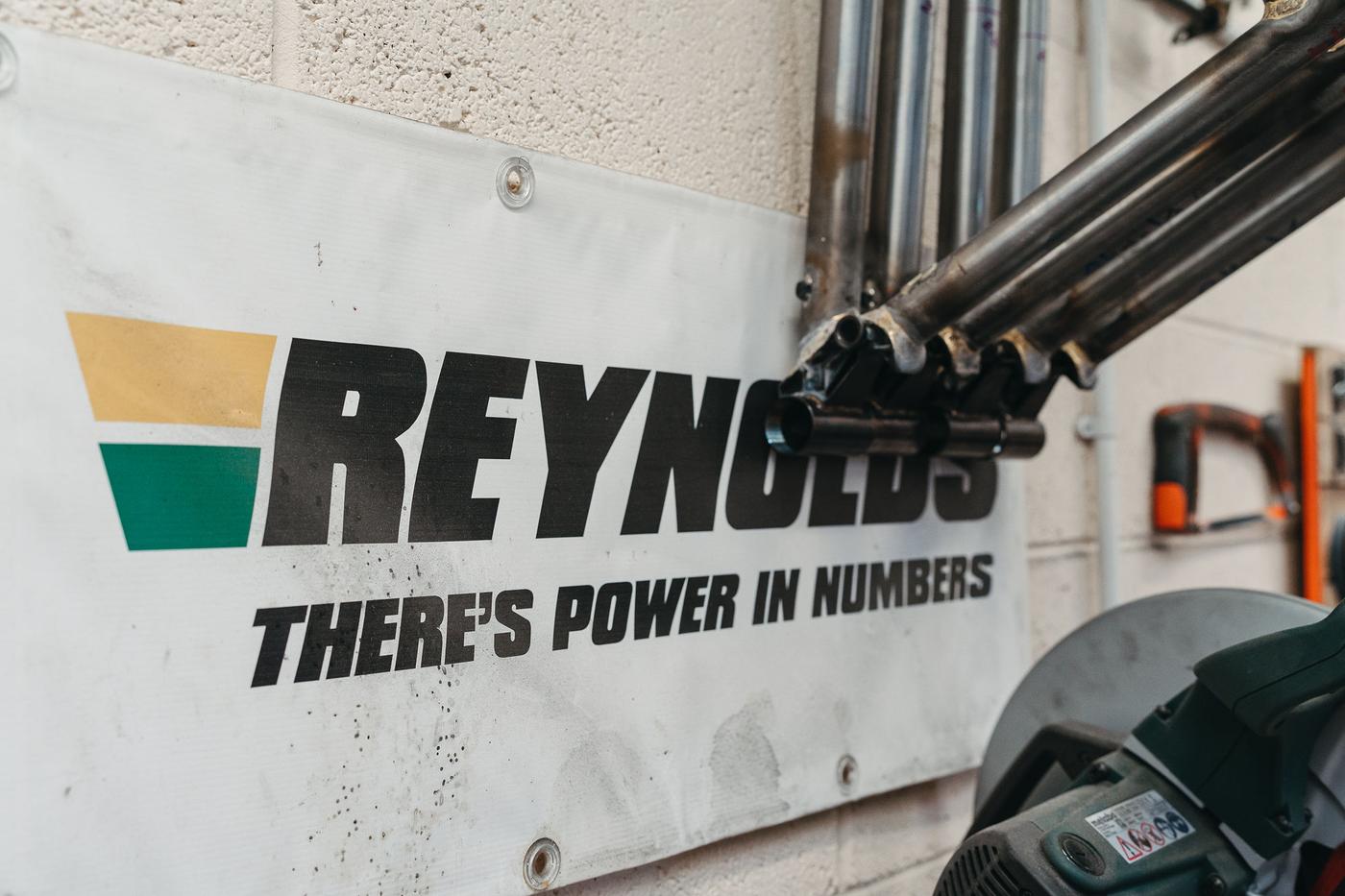 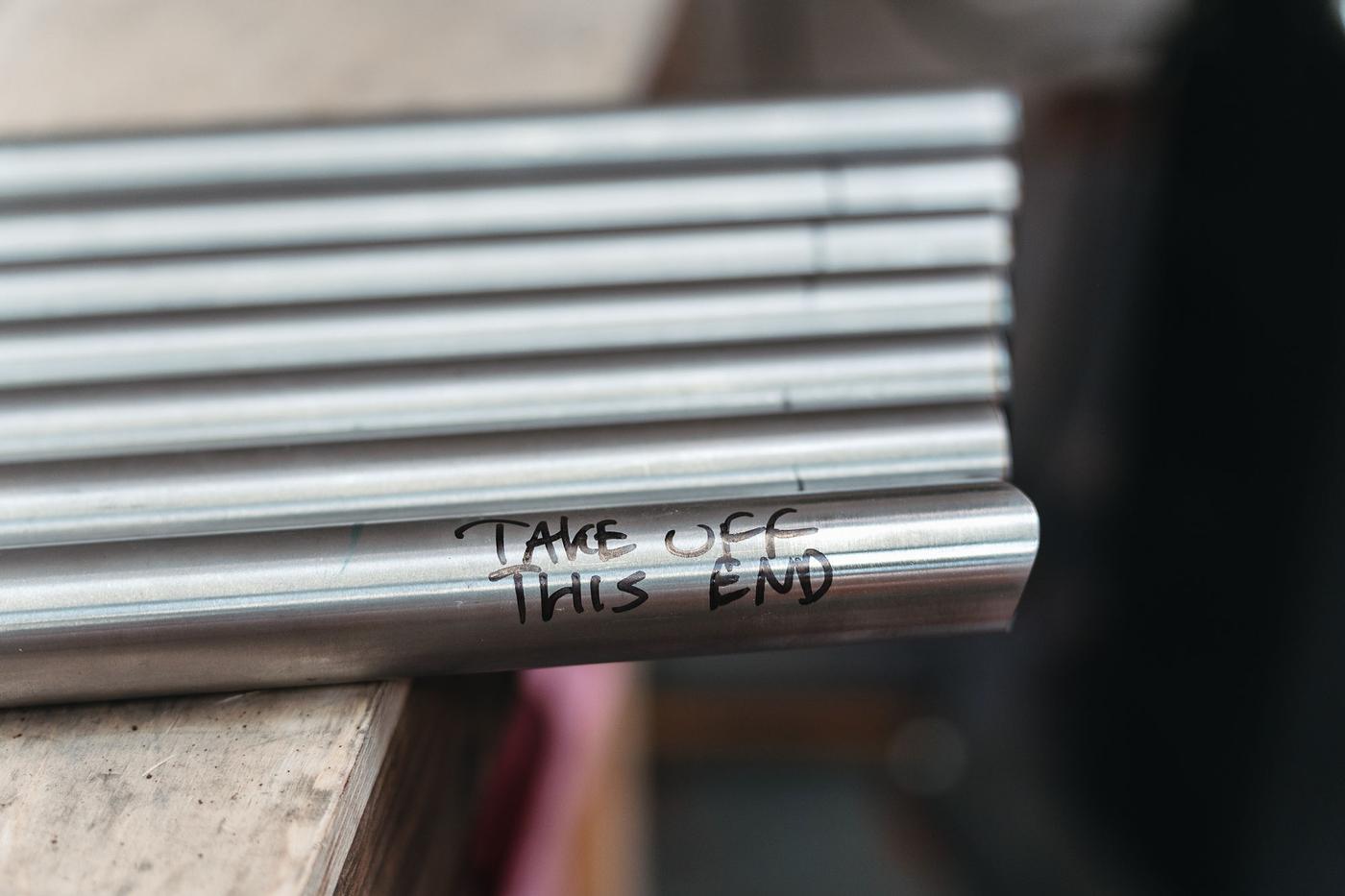 “A neutral-feeling bike might not sound sexy, and for sure it’s not going to win any marketing awards, but in my experience, when a rider feels confident on a bike, when they trust it, understand it, and believe in it, they’re able to really push their limits and get on with what’s important: enjoying the ride.” Perhaps that’s why Starling riders regularly crush their PBs on timed runs?

But what about geometry? Is that old-school too? Well, despite looking like throwbacks to some of the early 2000’s steel MTB’s, Starling geometries are actually ultra-modern and dare I say even progressive. In fact, back in 2016 Starling was amongst the vanguards of the long, low, slack movement. Take the Murmur for example: with a seat tube angle of 77.4º, 140mm front and rear travel and a head angle of 65.4º, it stood out like a sore thumb amongst its counterparts. It wasn’t long before the industry took note and soon enough, lower, longer, slacker became the new lighter, stiffer, stronger and the modern mountain bike was born. For more on how the Murmur rides, check out John’s comprehensive review here. 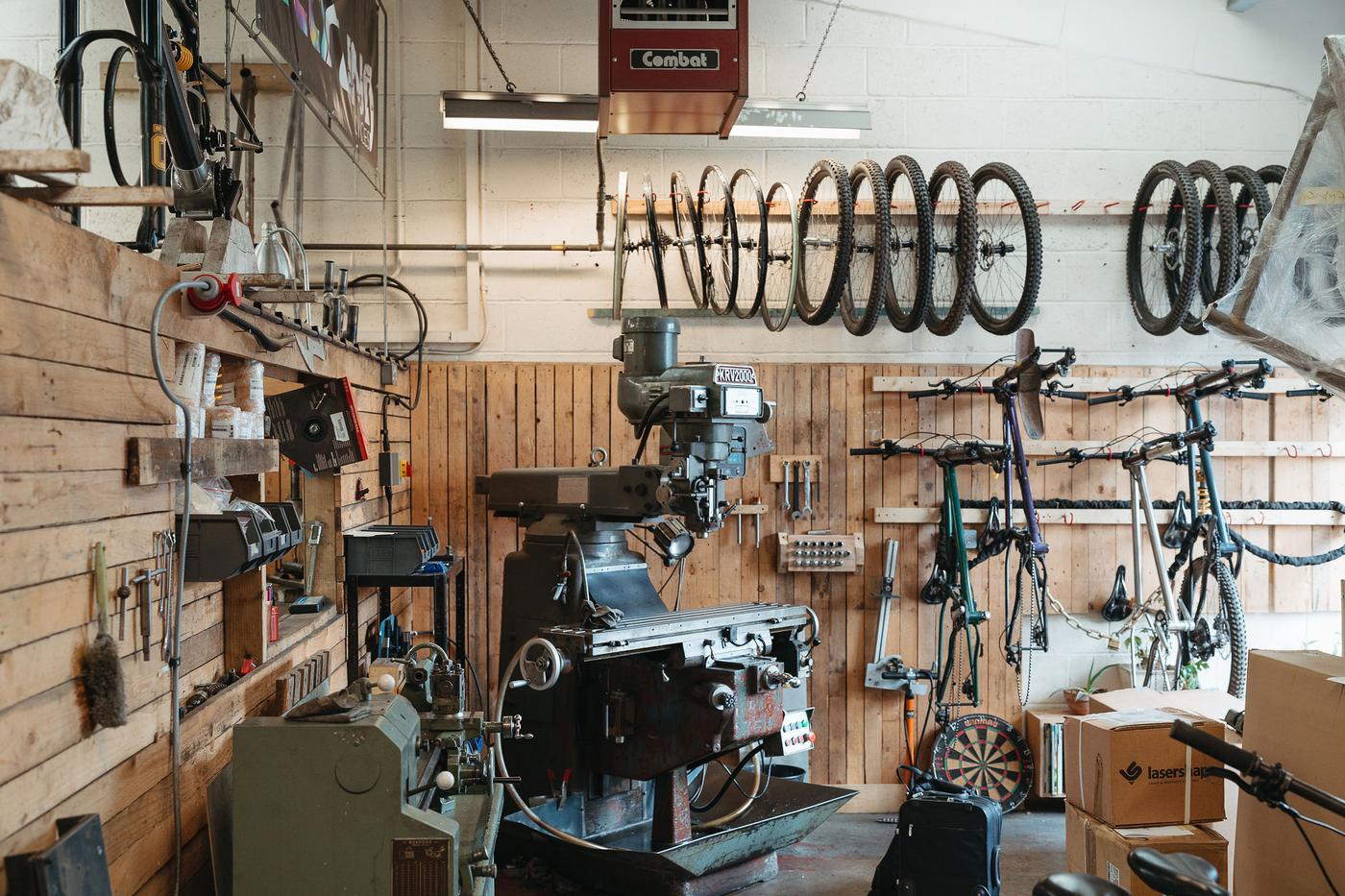 Perched in the alternative, hippy district of St. Werburgh’s, a few kilometers from Bristol’s bustling city center, the Starling Cycles workshop is a bright, open, and impressively sized space. A fleet of demo bikes hang in the main foyer, drenched in a spectrum of summer light cast from the stained-glass logo hanging in the window. Joe’s new shed (a small timber office) sits off to the left, its walls adorned with design blueprints, crudely taped-up RAL color charts and a mascot for the brand’s namesake: a starling poised on a branch.

Even though Joe’s aerospace background has enabled him to work with some of the most advanced design and fabrication technologies in the world, all of the machinery at Starling is decisively analogue—from the original 1940’s lathe that helped birth his first bike, to a beautiful KRV2000 turret mill that wears its weathered patina proudly, gained from its years of metallurgy service. 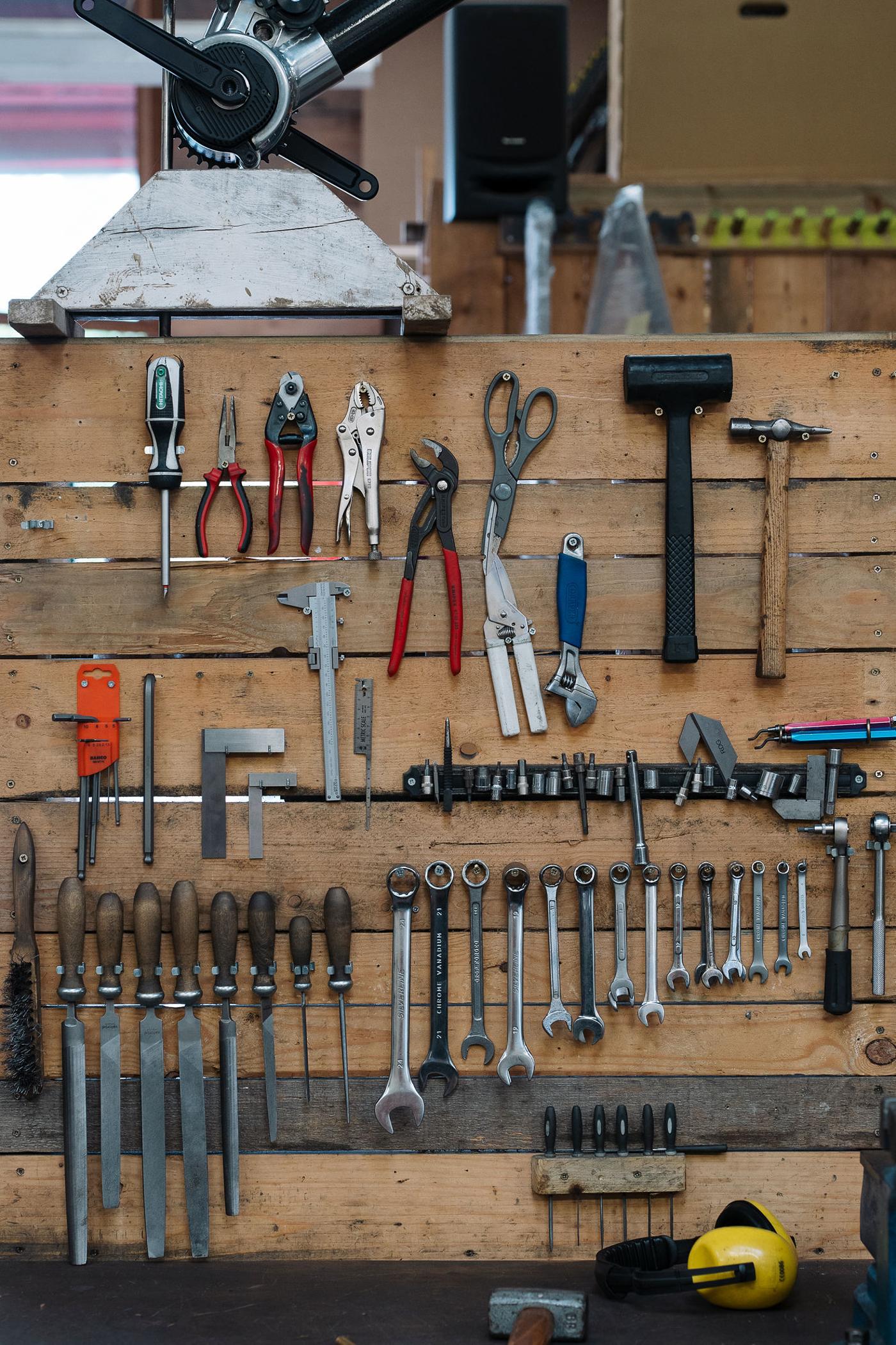 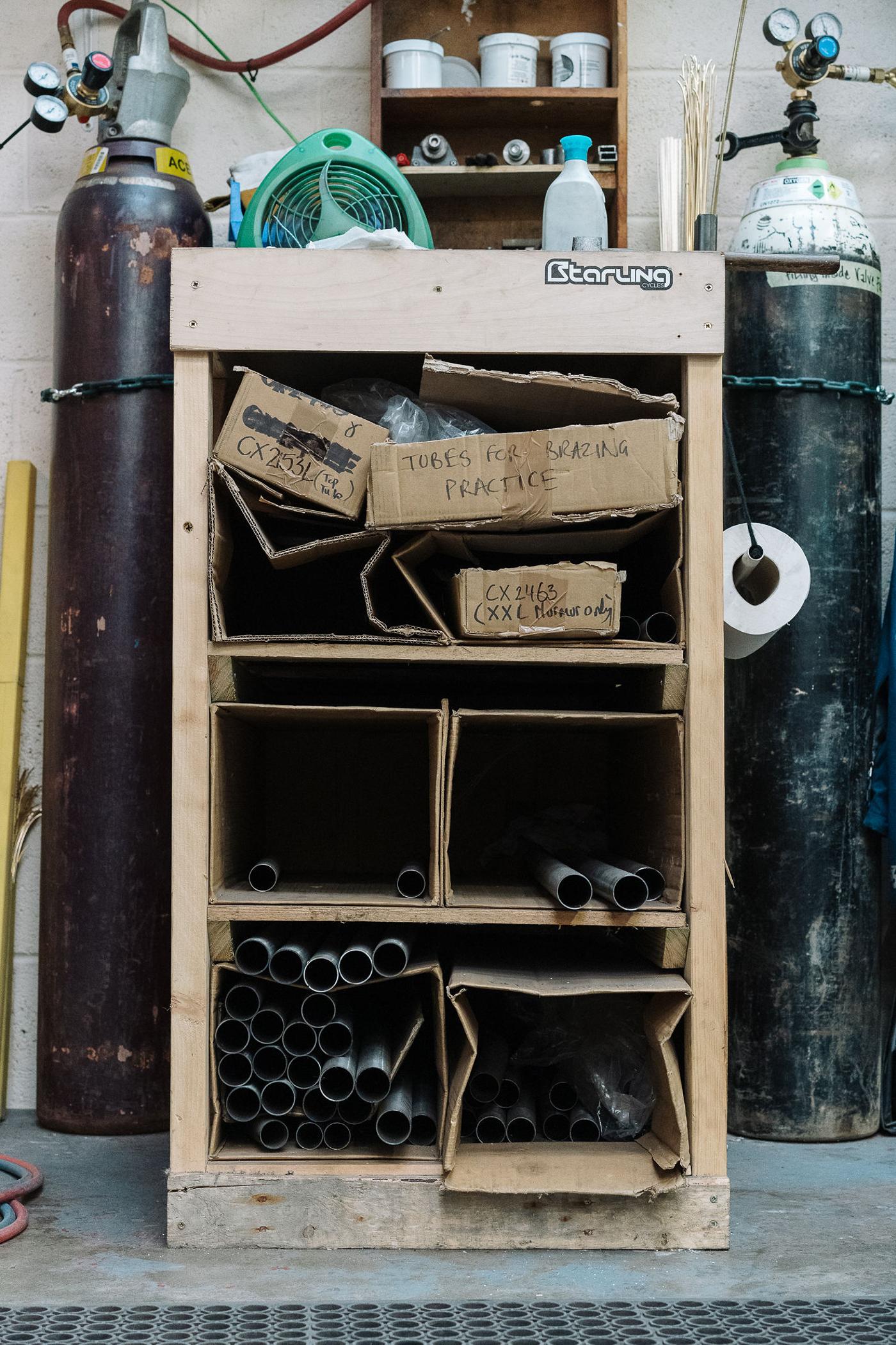 Beyond the divide, the space opens up to reveal the manufacturing side of the workshop. After Joe pours his 14th cup of tea for the morning, he gives me a tour around the space and explains the current manufacturing processes at Starling. “At the moment, we’re hand-building all the front triangles across our core bikes (Swoop, Murmur and Twist) right here in the UK,” he tells me. “The rear swingarm production and some specialist bikes (Roost Hardtail and Murmur Stainless) are outsourced to our partner ORA Engineering in Taiwan.” This is a smart move as it enables Starling to maintain consistent standards, keep build times realistic and continue offering the custom geometry options that make the brand unique. 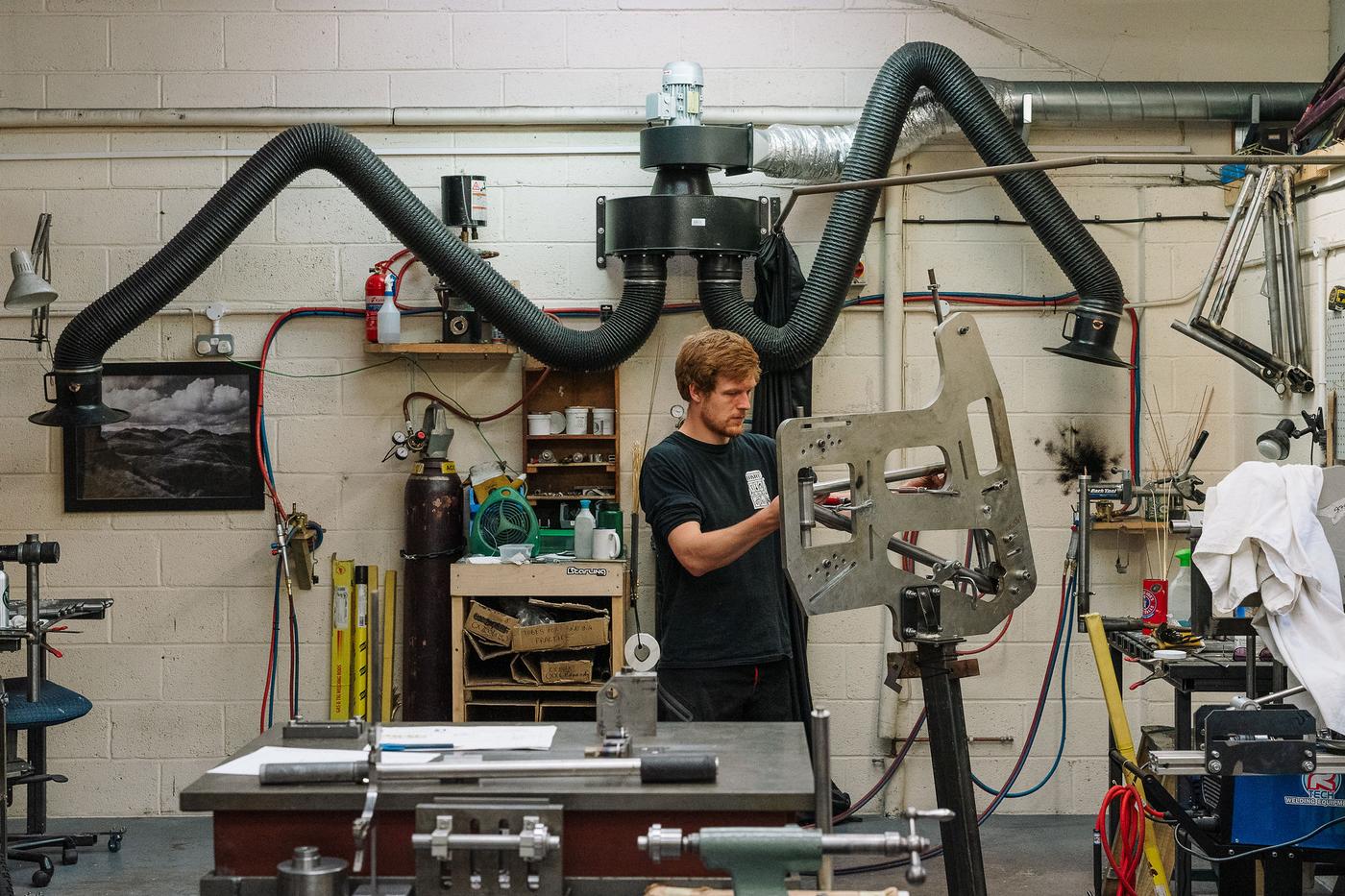 As I peer around the space, I cannot help but notice the huge fume extraction system towering over Ollie, its elongated, tentacle-like arms resembling Doctor Octopus. Unaware of his impending fate, Ollie begins loading the raw Reynolds 853 steel tubes into the frame jig, fires up his torch and begins brazing what will become the front triangle of a Murmur. With the tongue-in-cheek slogan of the West Country “Starling is Gurt Lush (Mind)” graffitied across its face, the Starling frame jig is a thing of both functional engineering and aesthetic beauty. Waterjet cut from a single piece of tooling aluminium, it’s perforated with holes, custom tooling slots and huge cut-out sections for easy torch access.

“Across all our core bikes the BB, main pivot, seat tube and front portions of the swing arm are identical,” Ollie explains as he walks me through the jig “So the only things that change are the head tube position and the rear axle position.” He pauses for a moment, obviously sensing my lack of framebuilding experience. “For example, for a larger size, we simply move the head tube forward one slot and up one slot to accommodate the longer fork,” he explains, gesturing at the Sharpie-stained XL hole on the jig. 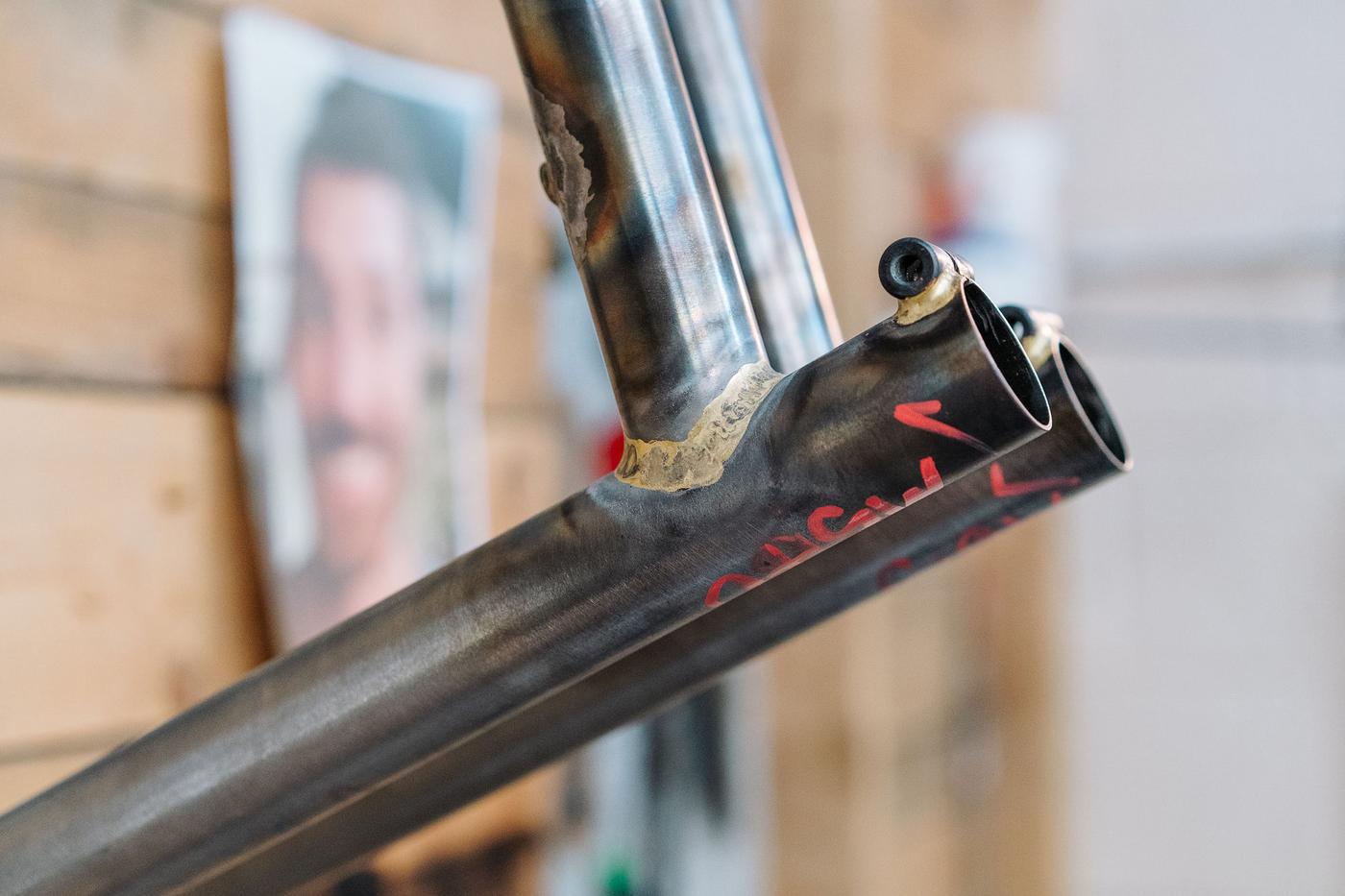 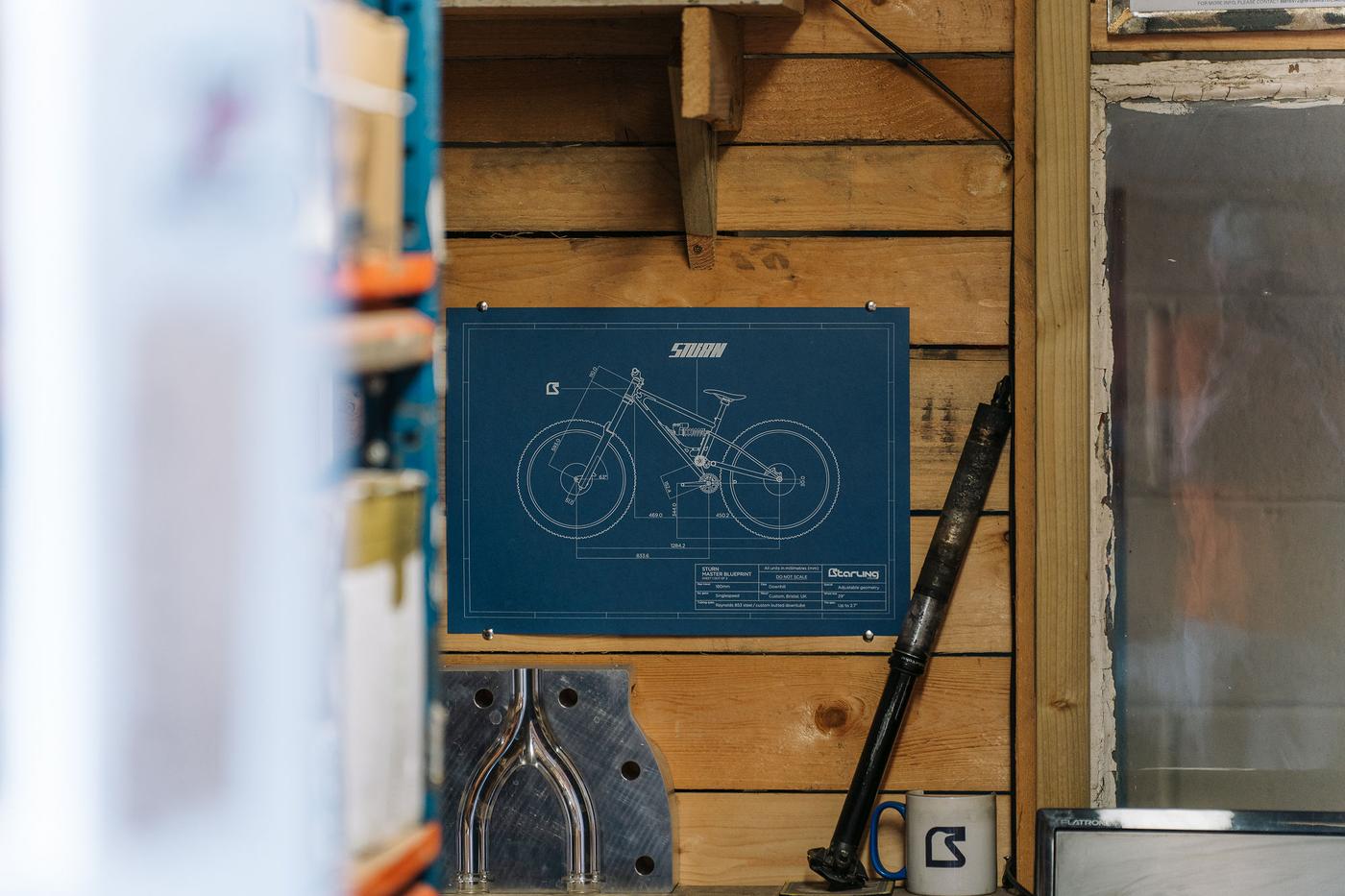 Don’t be fooled by the seemingly simple, braze-by-numbers approach here though. This method enables Starling to produce accurate, straight and strong front triangles across standard sizing options (M, L, XL, XXL) 100% of the time. But best of all, via their adjustable geometry sliders, they’re also able to offer custom sizing options for riders who want to dial in their frame to suit their size or riding preferences. From custom shock mounts and seat tube lengths, to one-of-a-kind full custom builds, Starling’s got a range of options to tickle your pickle.

You can learn more about Starling’s custom options here. If you’ve spent any time here on The Radavist, no doubt you’ve heard John wax lyrical about his personal Starling Murmur in its unique RAL 8001 Ochre Brown colorway. Well, it turns out, the crew at Starling loved the color so much that they’re now offering it on all their core bikes. You’re setting trends even across the pond, John! 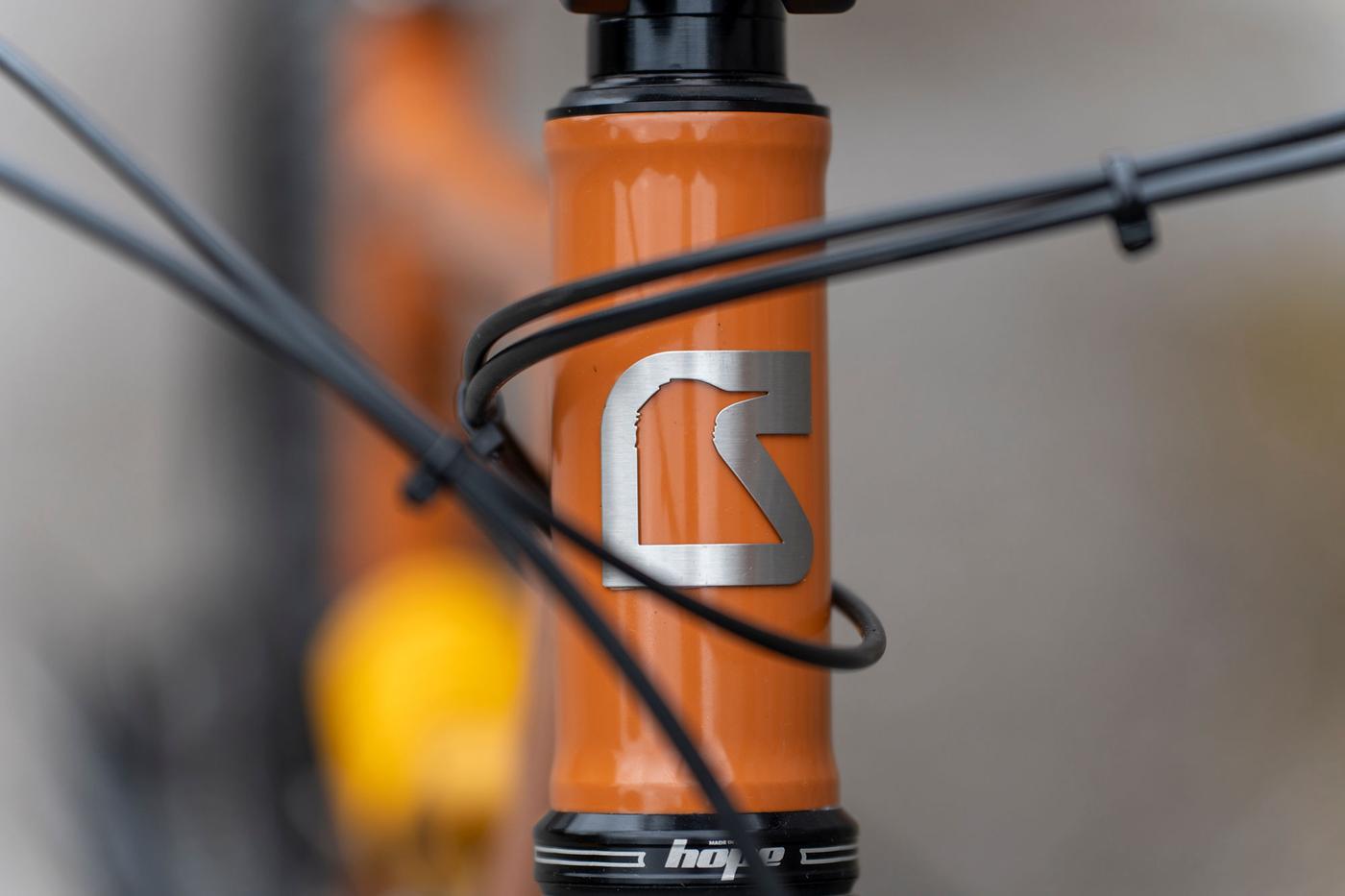 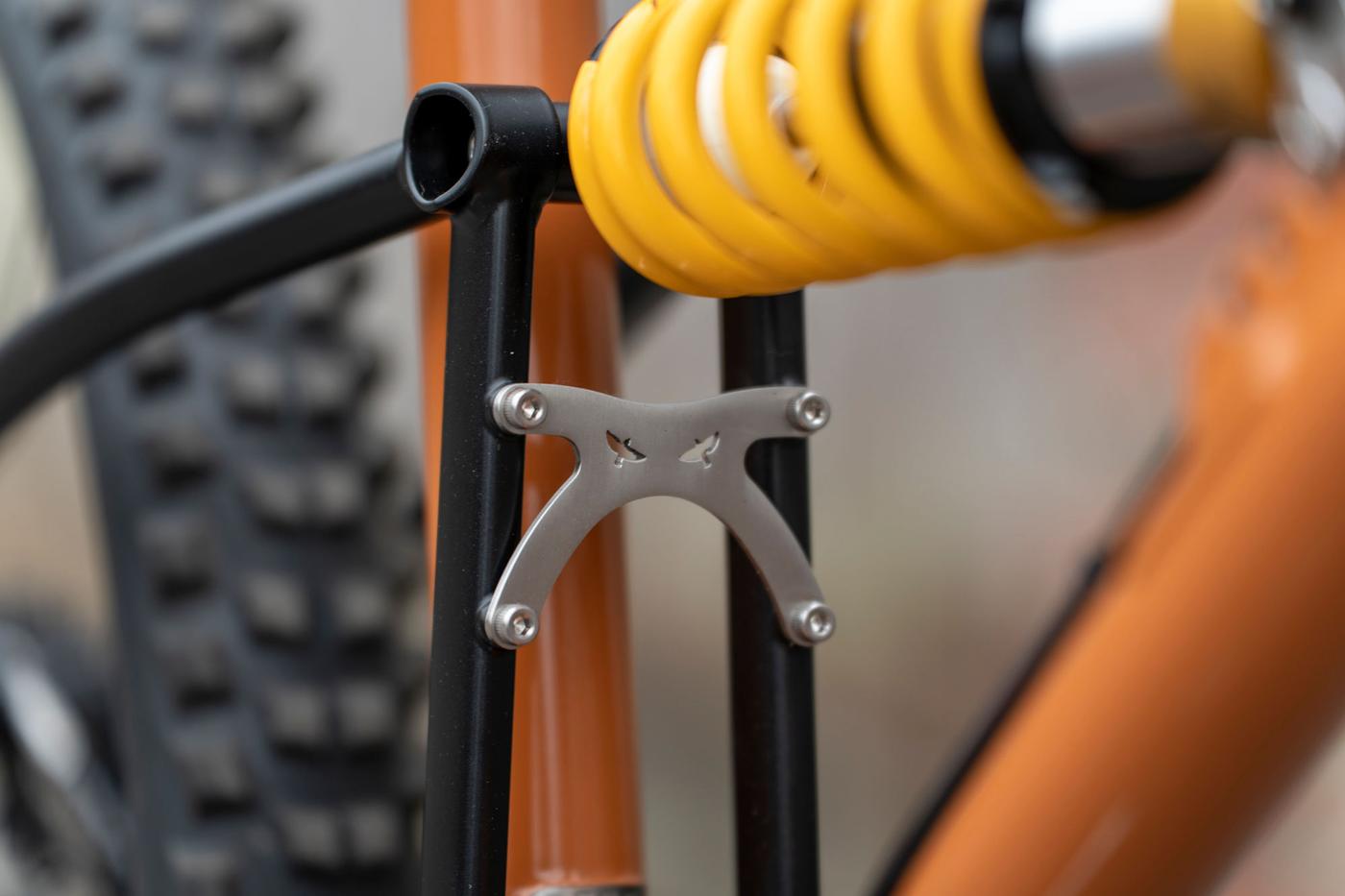 The Swoop is the OG Starling in the core line up. Built to go flat out between the tape or at the bike park, it combines 27.5” wheels and 160mm travel to give a lively, spritely, flick-knife feel that’ll carve through the trail with ease. Better still, the simple single pivot, supple steel frame and bomb-proof build kit delivers the perfect blend of good times, high speeds and low maintenance. 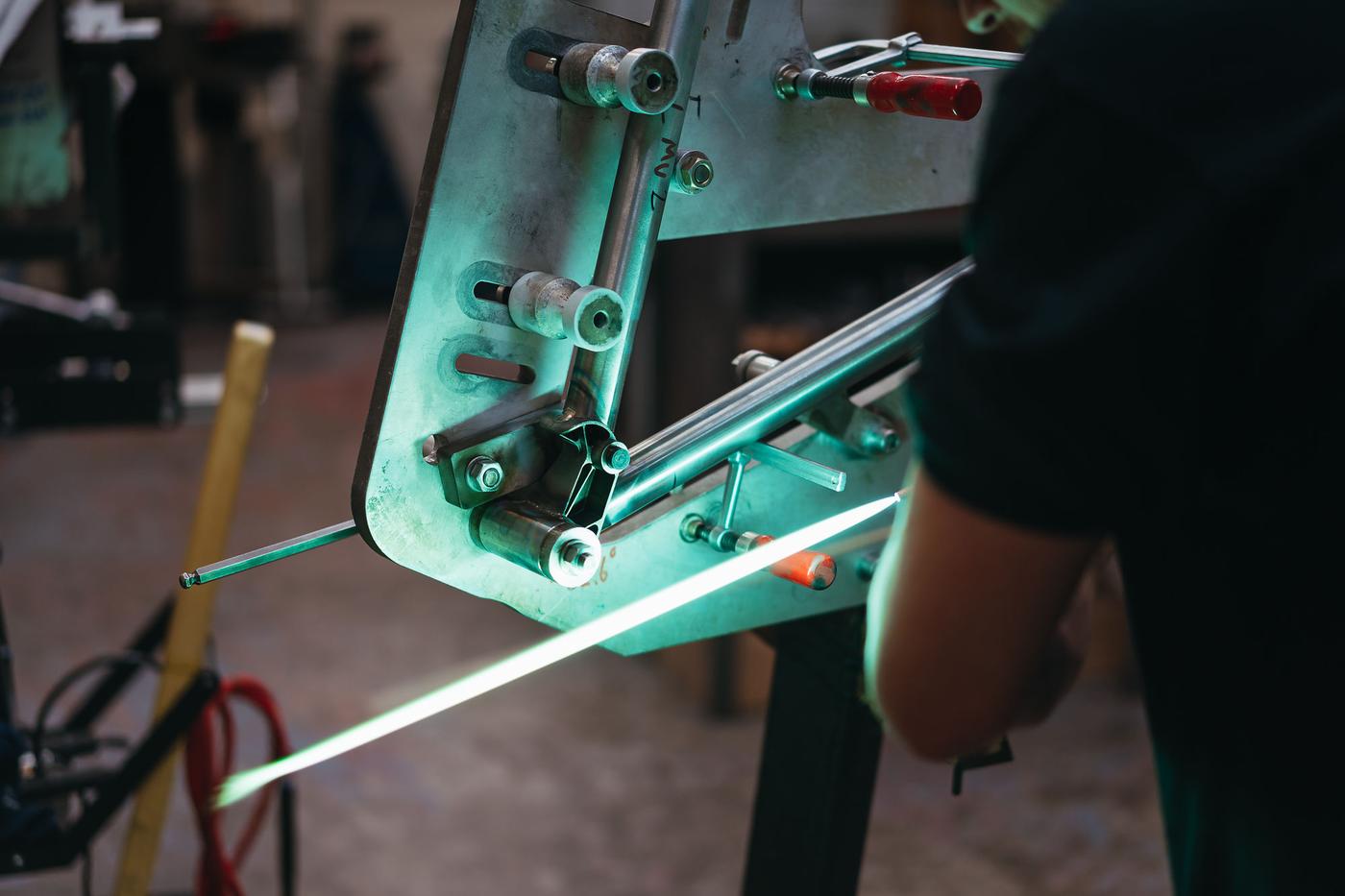 As Joe drives me back to my hotel, I can’t help but smile as I reflect on the day. I learned so much from the team, built some great new friendships and drank more tea than I ever thought possible. Thank you Joe, Ollie & James for showing me the ropes. Catch you next time I’m on Ol’ Blighty.