Among the birthplaces of mountain biking–Marin County, Crested Butte, Moab–lies the quintessential mountain town of Durango. The list of World Cup and Olympic racers who currently or formerly called Durango home is exhausting and your hopes of stealing a local KOM is comically out of reach. With massive community support and NICA teams that feed the pro ranks a steady stream of new names, it doesn’t look like that reputation is going to fade anytime soon. 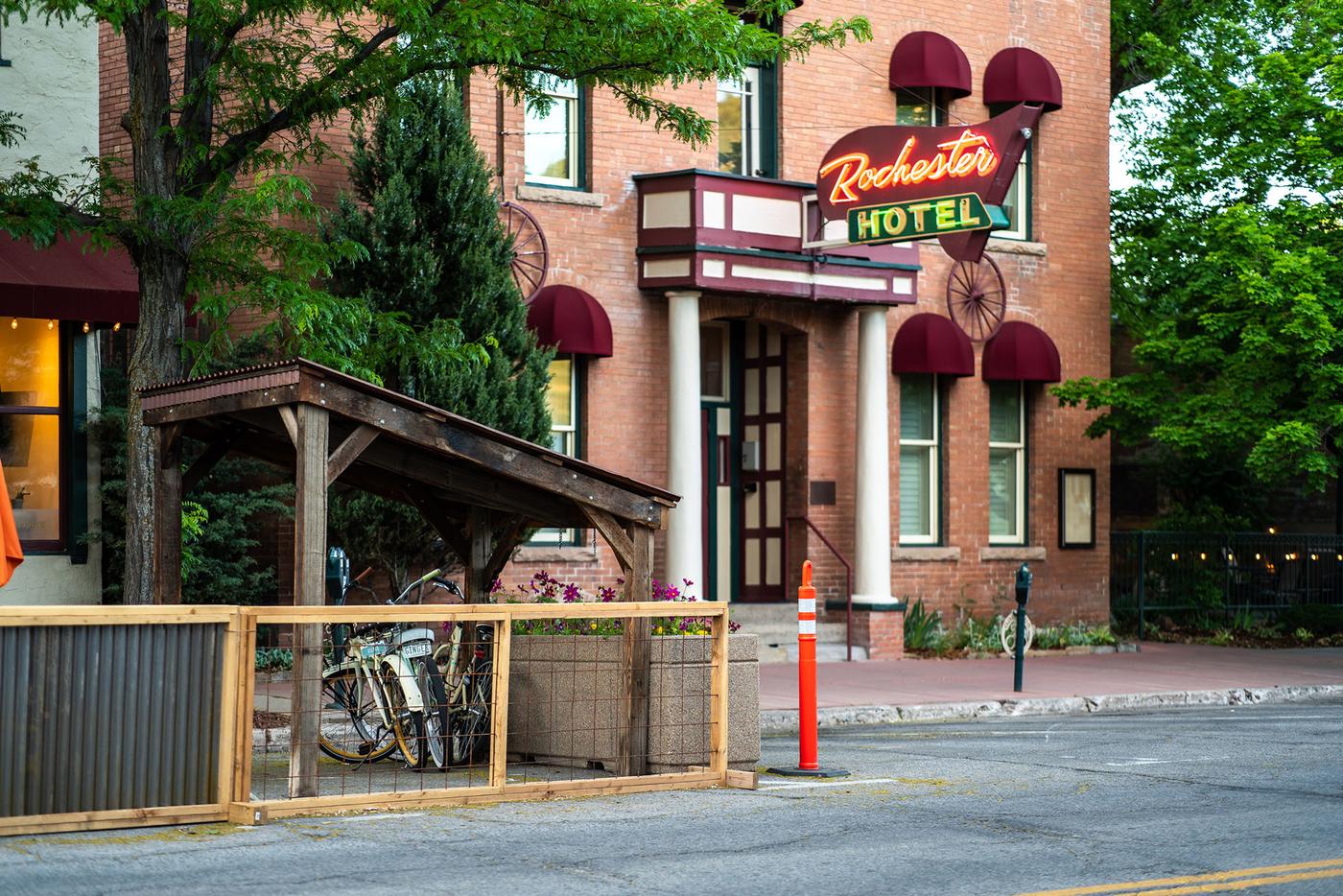 Located in the lush Animas Valley next to the La Plata mountains to the east and the picturesque San Juan Mountains to the north, the region was once home to a mix of Ute and Ancestral Pueblo tribes for generations. After the United States took over the territory and prospectors discovered valuable ore in the mountains, the US forcibly removed the remaining Ute from their lands and began the settlement process to extract silver and gold. Durango was established after Silverton, which kept discovering lode after lode of ore high in the San Juans. To help accelerate this process, Denver & Rio Grande Railroad built Durango as a hub to transfer their valuables back to the Front Range for processing.

Today, Durango is a mix of tourist destination and college town with Fort Lewis College looming over downtown. Yesteryears mining camps are now vacation homes and the old saloons and taverns buzz with bright-eyed youth instead of grizzled mountain men. During the Covid-19 pandemic, Durango, like many other desirable Intermountain West communities, has seen explosive growth and one can’t help but imagine yet another change is already in motion. 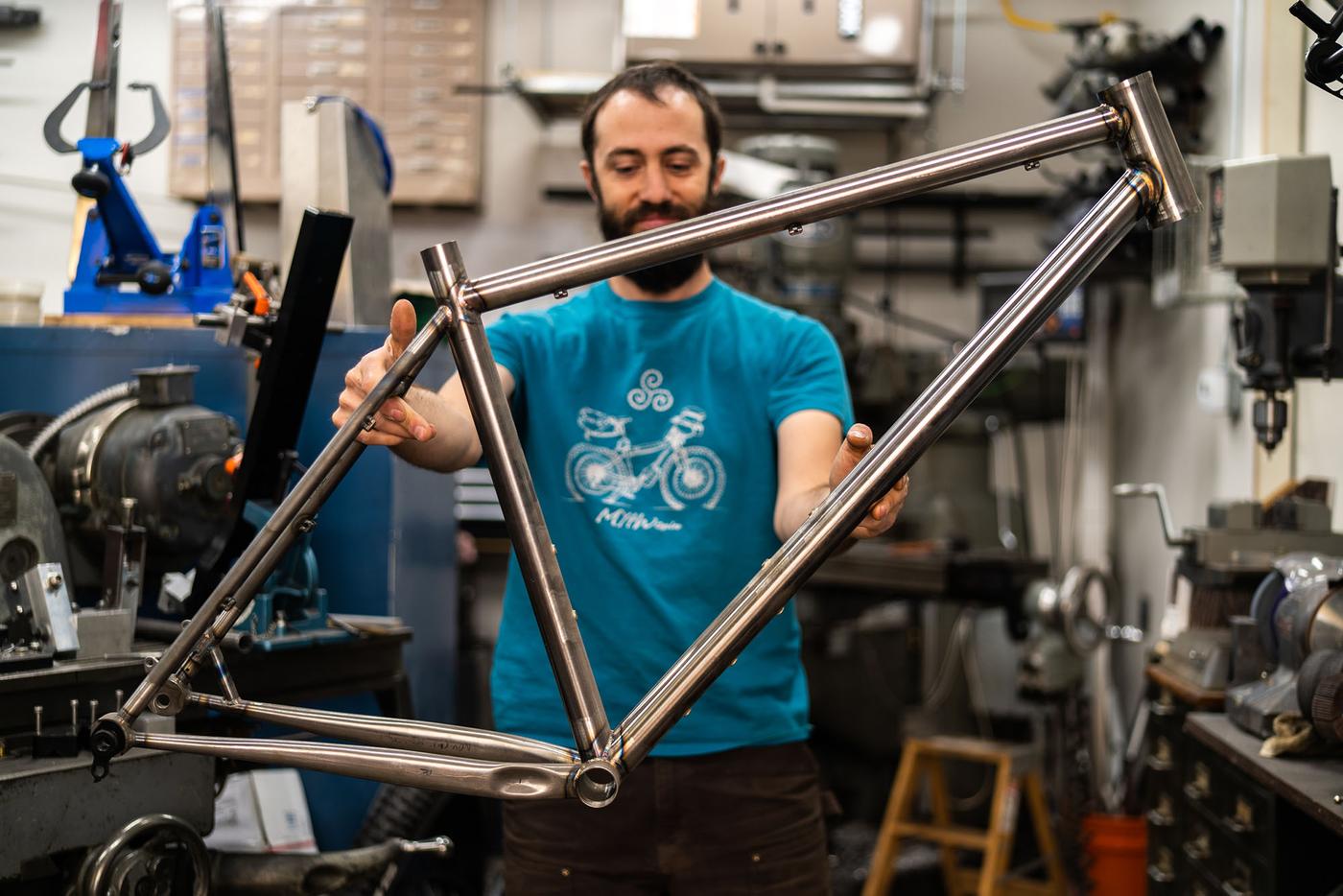 The Man, the Myth, the Builder

Eric Tomczak knew he wanted to build bikes from day one. He learned the trade of welding at a vocational school in Cortez before diving head first into the trade by working production at King Cage with the legendary Ron Andrews. Ron’s history in the region is well known with contributions to Yeti Cycles, Ibis, Fat Chance and others, thus providing valuable perspective and experience on the handbuilt cycling industry for Eric. 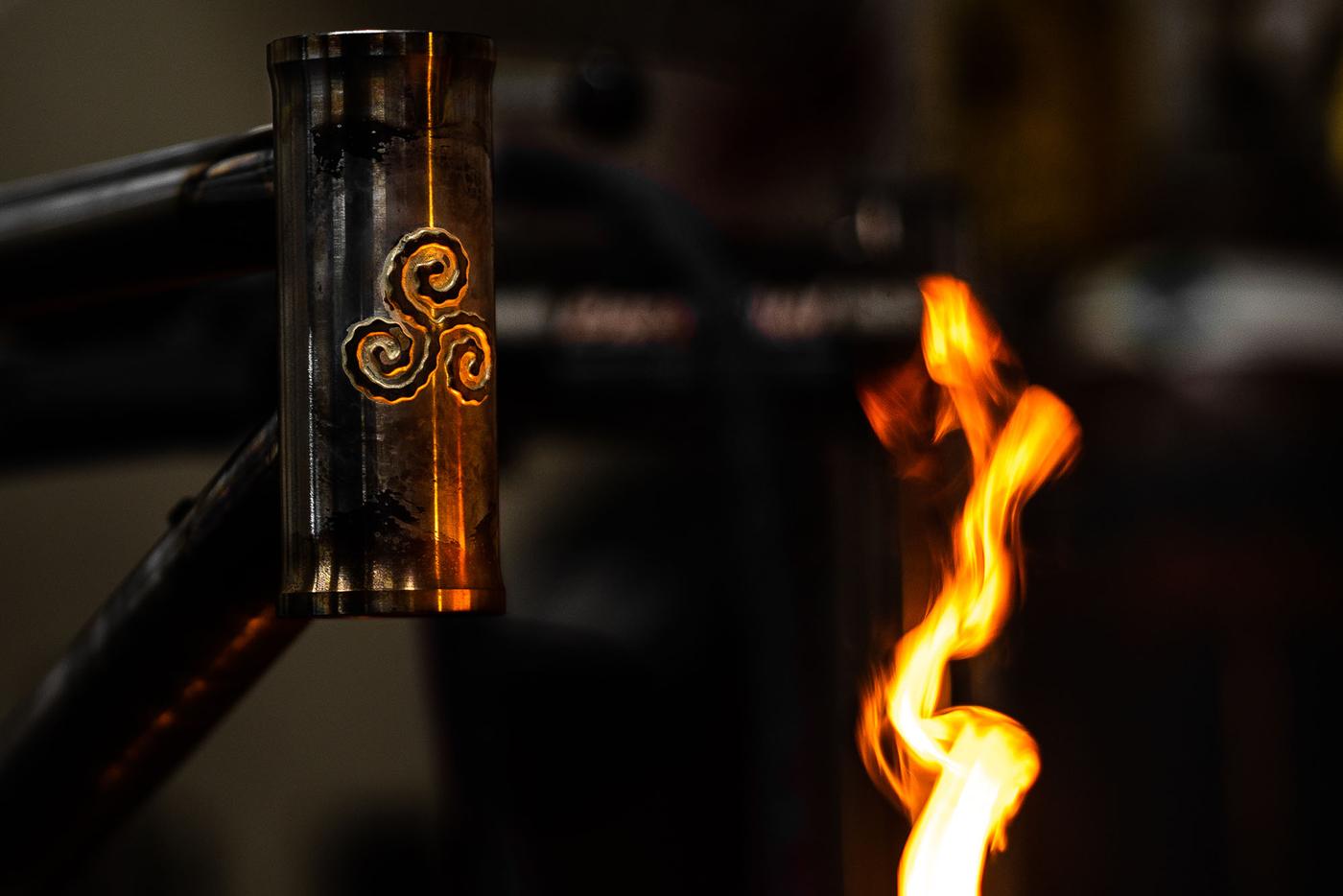 Eric comes off as a bit of a nerd and reluctant enthusiast. His demeanor is calm and collected, his workshop pragmatic and decidedly simple. He talks about bicycle frames as tools meant for real life use and seems to avoid industry buzzwords. There is an air of focus and intent in everything he shows you around his shop. 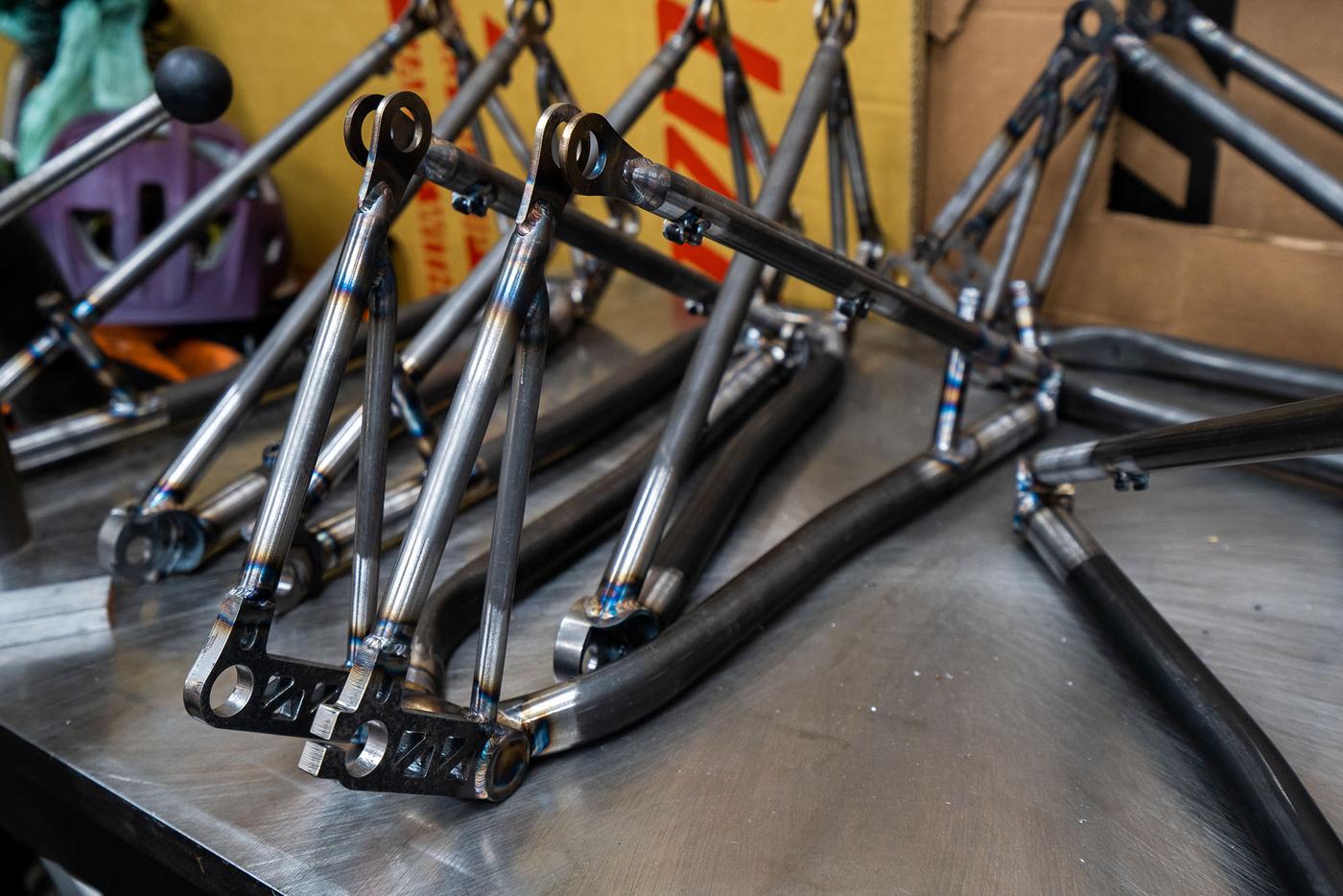 Recalling some tongue-in-cheek advice he received from Ron, Eric laughs as he explains that Ron told him building bikes was unwise and would be a doomed enterprise. Sometimes it is best not to take advice from your close friends. Then again, Myth Cycles has only been around a few years, so we still don’t know who is right. Nevertheless, after Eric and his wife purchased their home near downtown Durango he began to immediately fill their garage workspace with heavy machinery and tooling, and upgraded the electrical subpanel.

As we toured his workspace he pointed out the novelties he’s collected along the way, including heavy duty drawers and equipment from the now decommissioned Navajo Generating Station outside of Page, AZ. He purchased the items during an auction before they detonated the towers and feels no remorse for the plant’s demise. The tools assembled throughout his workspace resemble their master; purposeful, unkempt, practical. 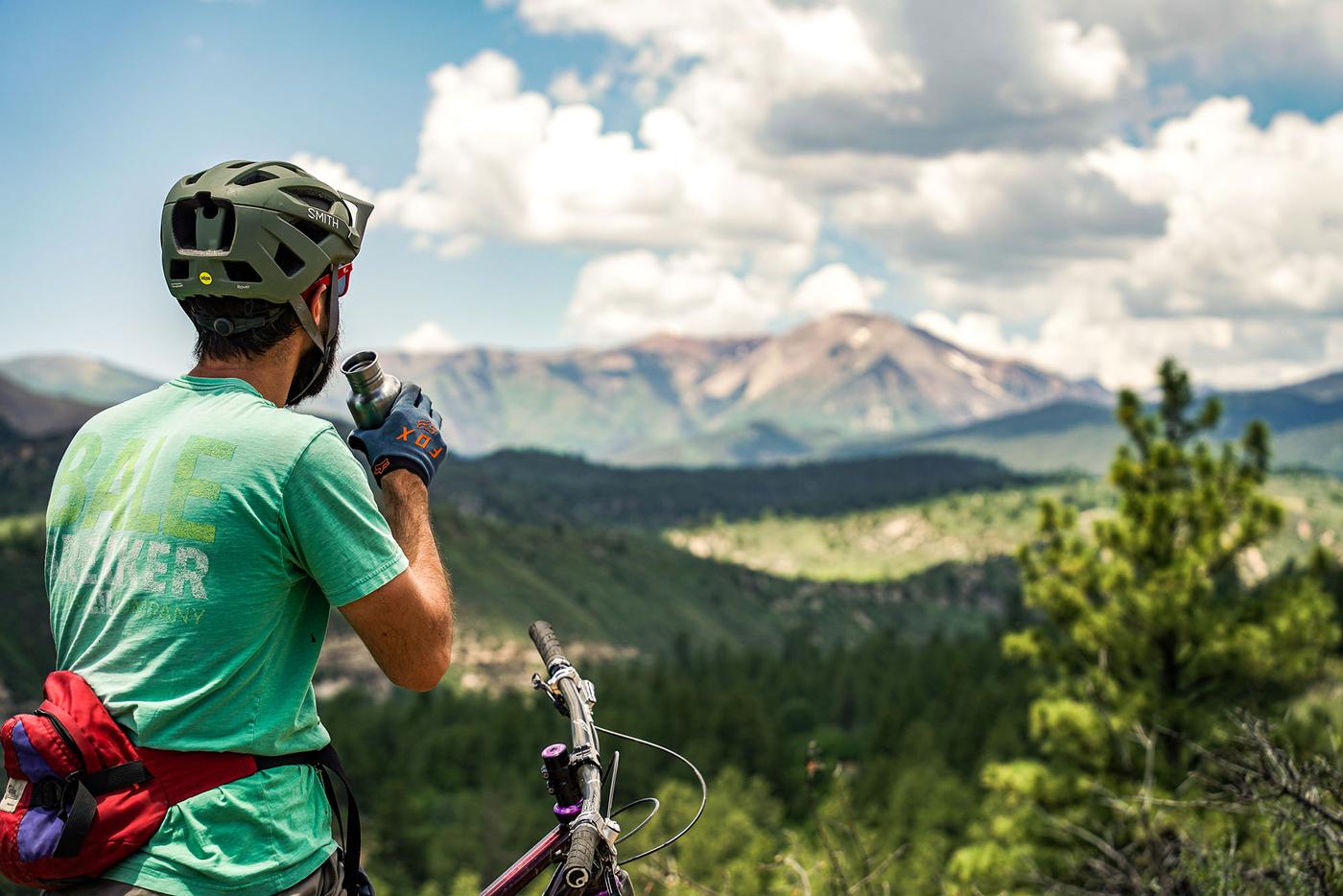 What’s in a name? Turns out not that much. Eric had settled on Myth Cycles after toying with various other brand names, none of which sounded interesting. Myth just sounded right and played well into his choice of a logo, a triskelion, one of the oldest symbols in human history. The spirals had always resonated with Eric as motifs placed on important items and places, signifying both movement and purpose. Plus, in an odd way, the triskelion looks like a rider on a bicycle. 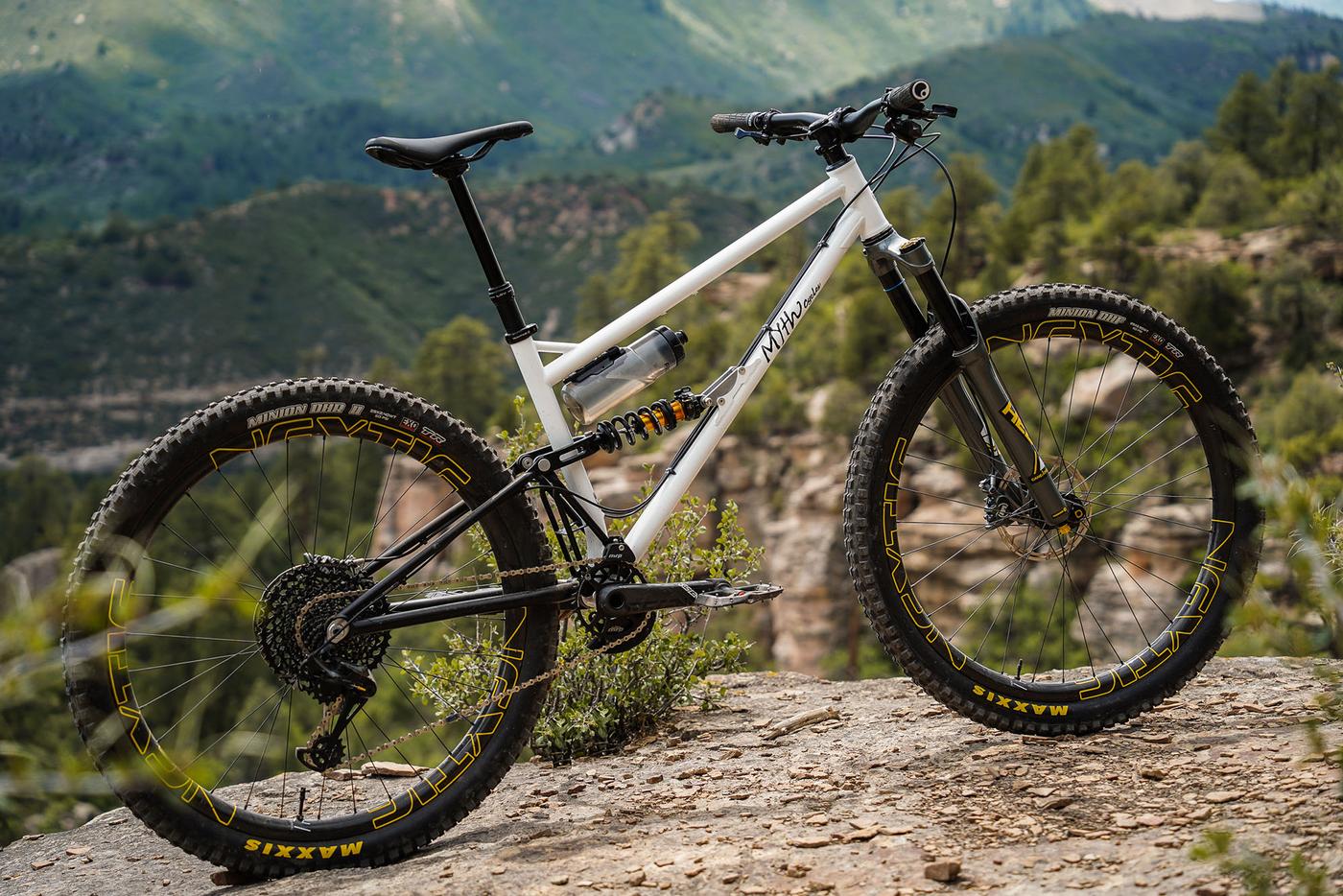 Hardtails and then… the Zodiac

Myth’s main focus has been hardtails, where Eric has been building 29er hardtails for trail riding as well as bikepacking. His love of the high-country surrounding Durango is apparent with his eyes lighting up each time the topic arises. His assortment of frames from the Talos to the Wyvern speak to the local terrain he enjoys riding. While custom frames are always an option, these ‘off the shelf’ options allow him to produce larger batches rather than re-jigging for every frame.

Feeling he lacked the control and quality he desired in powder coating, Eric purchased his own equipment and taught himself the trade, converting his father’s garage into a powder coating studio. Other than the Paragon Machine Works components, his frames are borne from his hands from start to finish. 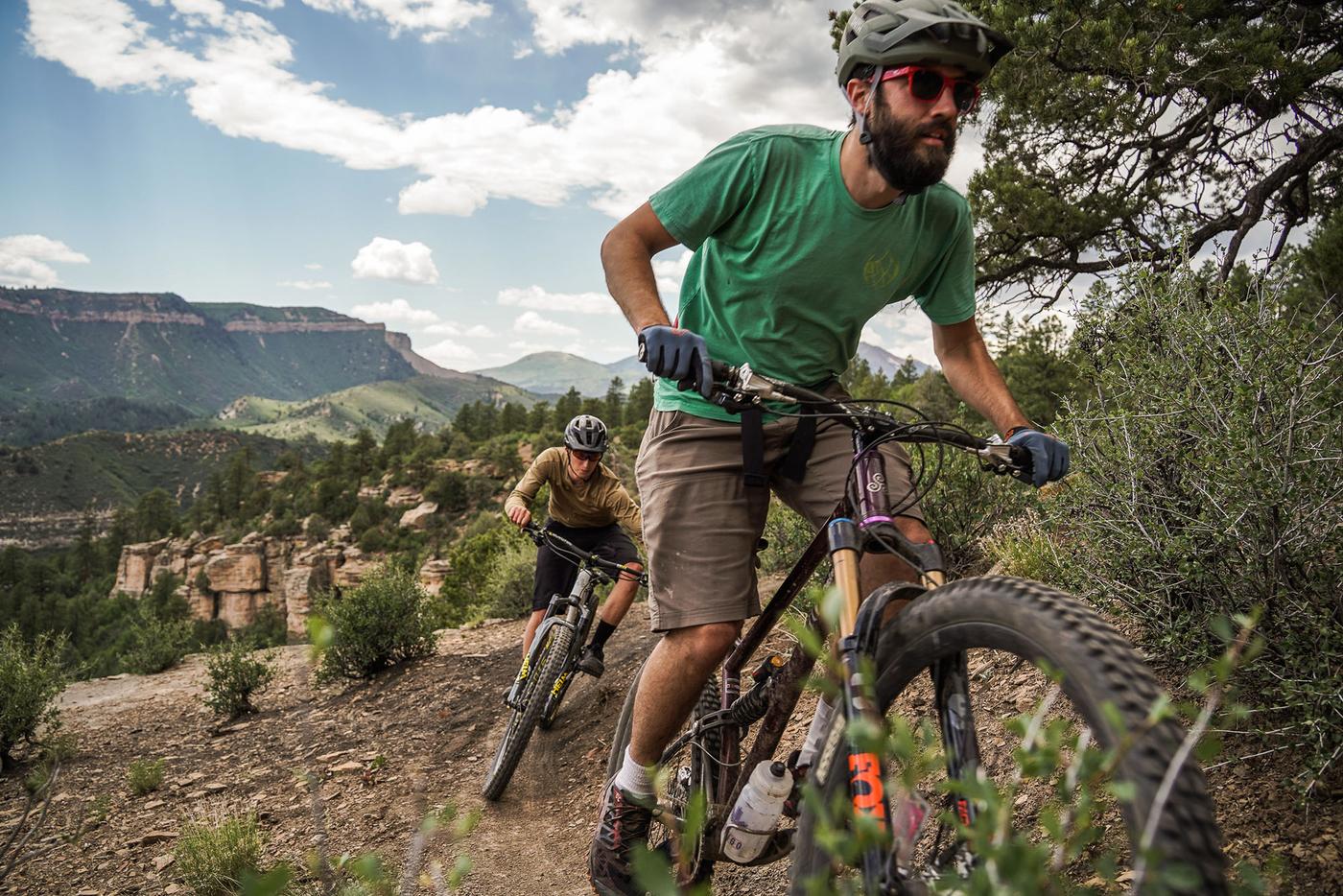 Some of his favorite trails can be bruising on even the best-built hardtail and so began the pursuit of a full-suspension design. Eric, knowing his own limitations, employed help from one of North America’s best-known suspension tuners who happens to live in town: Anthony Diaz of Diaz Suspension Design. Over countless long discussions, Eric learned the intricacies of suspension concepts, and the most important parameters to design around. With a solid knowledge base to build on, he designed and built the first prototype.

Eric’s focus was avoiding ending up too far on either end of the pendulum: he wanted a frame that was capable for nearly all types of riding while taking advantage of some of the modern changes in mountain bike design. His reach numbers are roomy, chainstays sensible, wheelbase long, and bucking an industry trend, he raised the bottom bracket. Oh, and the stack heights are meant for full-sized adults as well.

After years of testing prototypes and the occasional tease on Instagram, the Zodiac was born and one of the few North American steel full suspension bikes was ready for market. 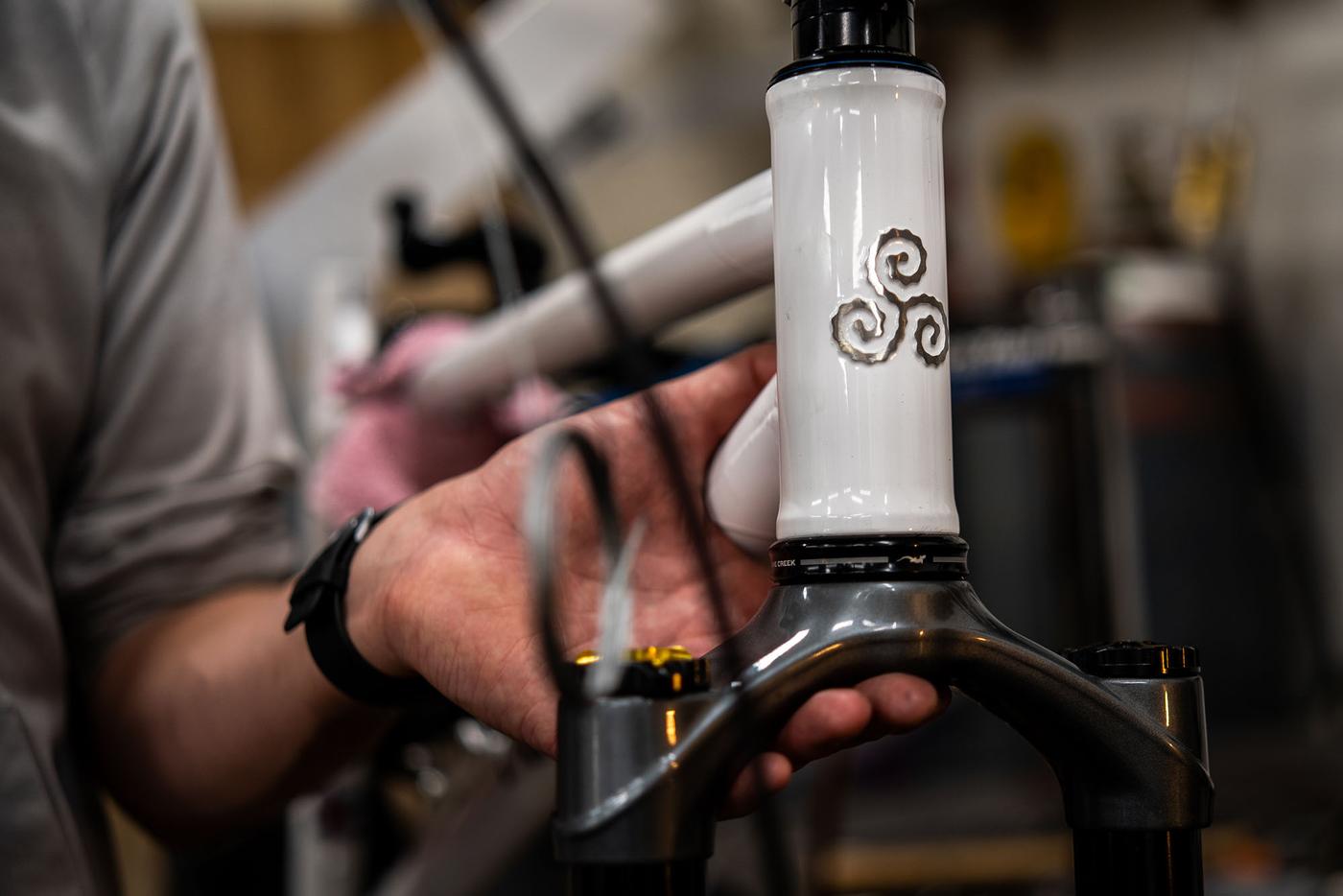 When word got out about a USA run of steel full suspension bikes, Eric’s phone began to ring from industry news and bloggers across the continent. Overnight his website visits exploded and his first bookings were filled almost immediately.  Despite photos of a test mule with an uncut steerer tube (oh the horrors!), the Zodiac was ready for prime time.

Luckily, I was first in line. Early on, when Eric posted teasers of the first prototypes, I had reached out in anticipation of this model coming to fruition. When news broke of the first run, I made a quick apology to my wife and placed a deposit. For months on end, Eric and I would trade emails as the build progressed and nerding about the Southwest, photography, and bikes. 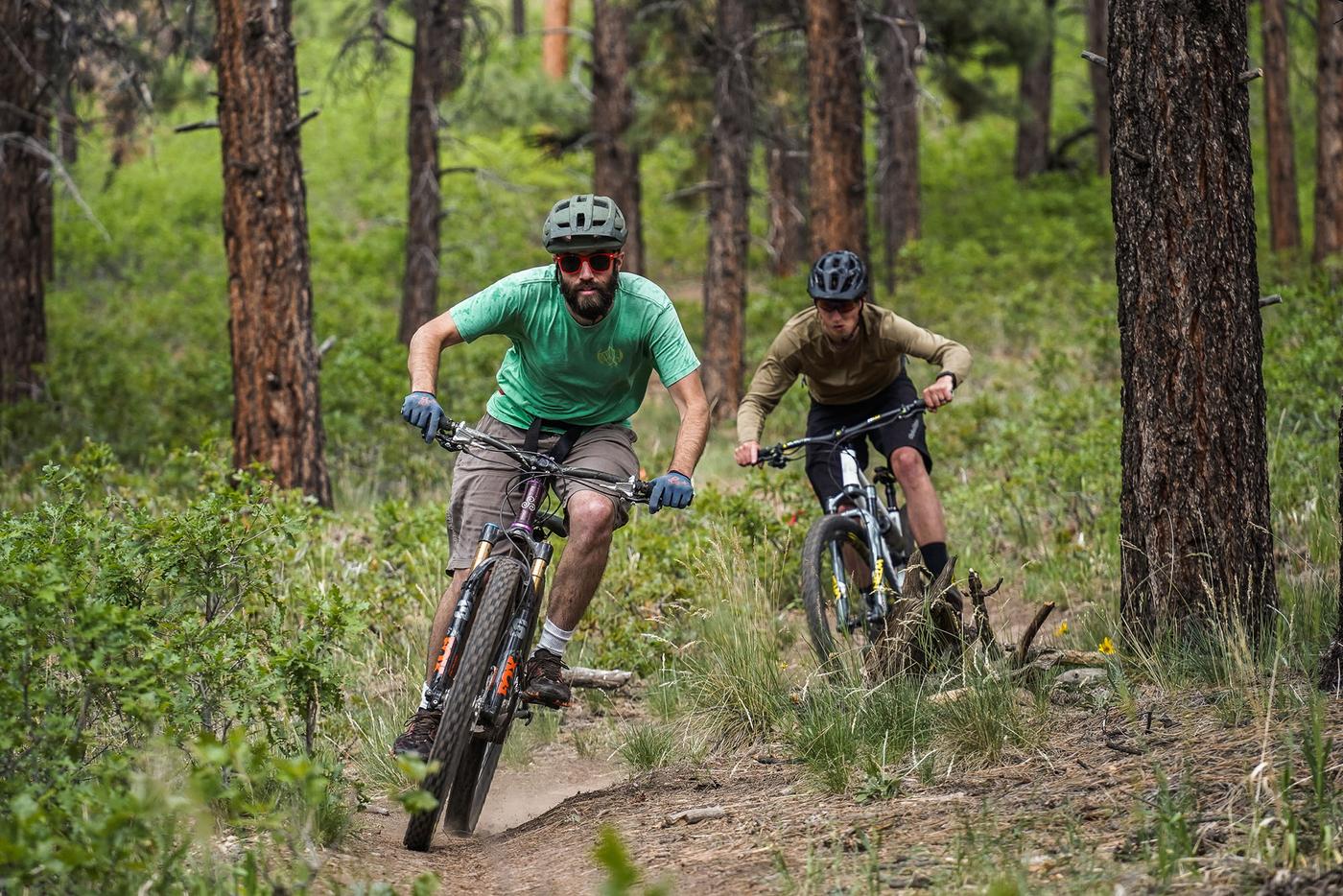 Here we are now today, watching monsoon clouds build over Animas Mountain and swapping stories in his backyard before revealing the first production Zodiac frame in the wild. Given the impossibility of finding components at the moment, I robbed my Transition Sentinel of its vital organs and showed up to Durango with a box ready for transplant. We both felt it was an unusual opportunity to photograph, build, and ride the first of its kind on the same day.

Everything started falling into place and the final form of Zodiac #1 revealed itself. I admired the thoughtful design decisions like the center cable routing, threaded bottom bracket, and accessible bearings. The bracing around the yoke and chainstay is both understated, but interesting. The tubed brake mounts–plain, yet elegant.

After a brief stop for lunch burritos, we rode from Myth HQ onto some local singletrack to do a break-in ride and cap off an enjoyable visit. Rarely does a bike ‘just work’ so easily out of the box. No trailside adjustments were made, no knobs turned, nary even a saddle height change. Nope, we just climbed up the local mountain in anticipation of some photos and a chunky ramble back in town. 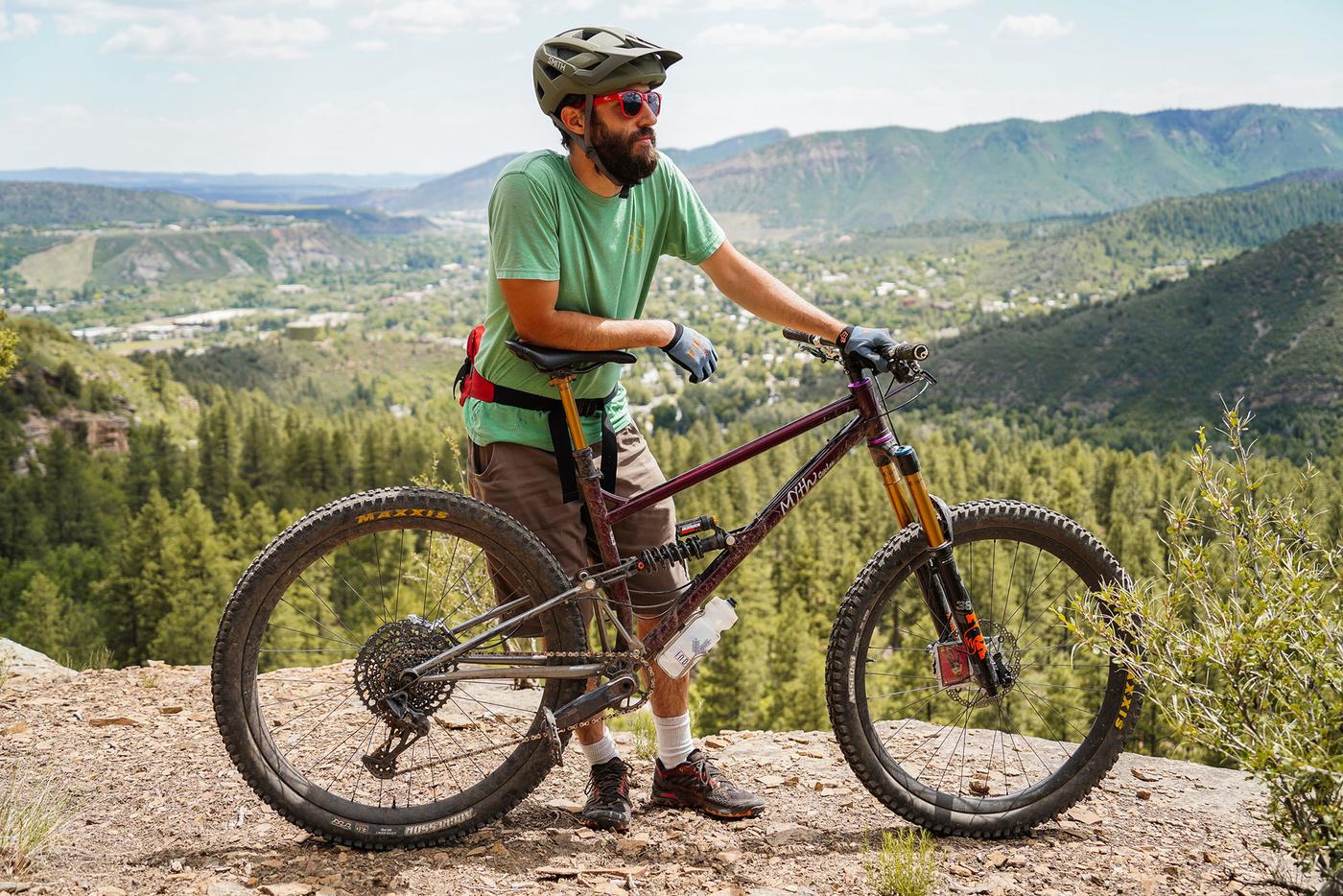 “BOOM!” And just like that, our ride was cut short. A lightning bolt struck so close our ears were ringing and my feet left the ground. One downside, we joked nervously, of riding a ferrous bike is you suddenly become a lightning rod. With rain falling hard and clouds building, the nearby strike was enough to send us booking it back downhill and to the safety of lower elevations.

While Zodiac #1 is now home here in Santa Fe, the other batch is nearing completion and ready for delivery. Soon other riders will be enjoying Durango’s finest and another beautiful steel steed is now added to the legacy of Durango’s handbuilt bicycles. Nothing left to imagine, the Myth is real.

If you’d like to place a deposit on a Zodiac, you can do so at Myth Cycles for September delivery.